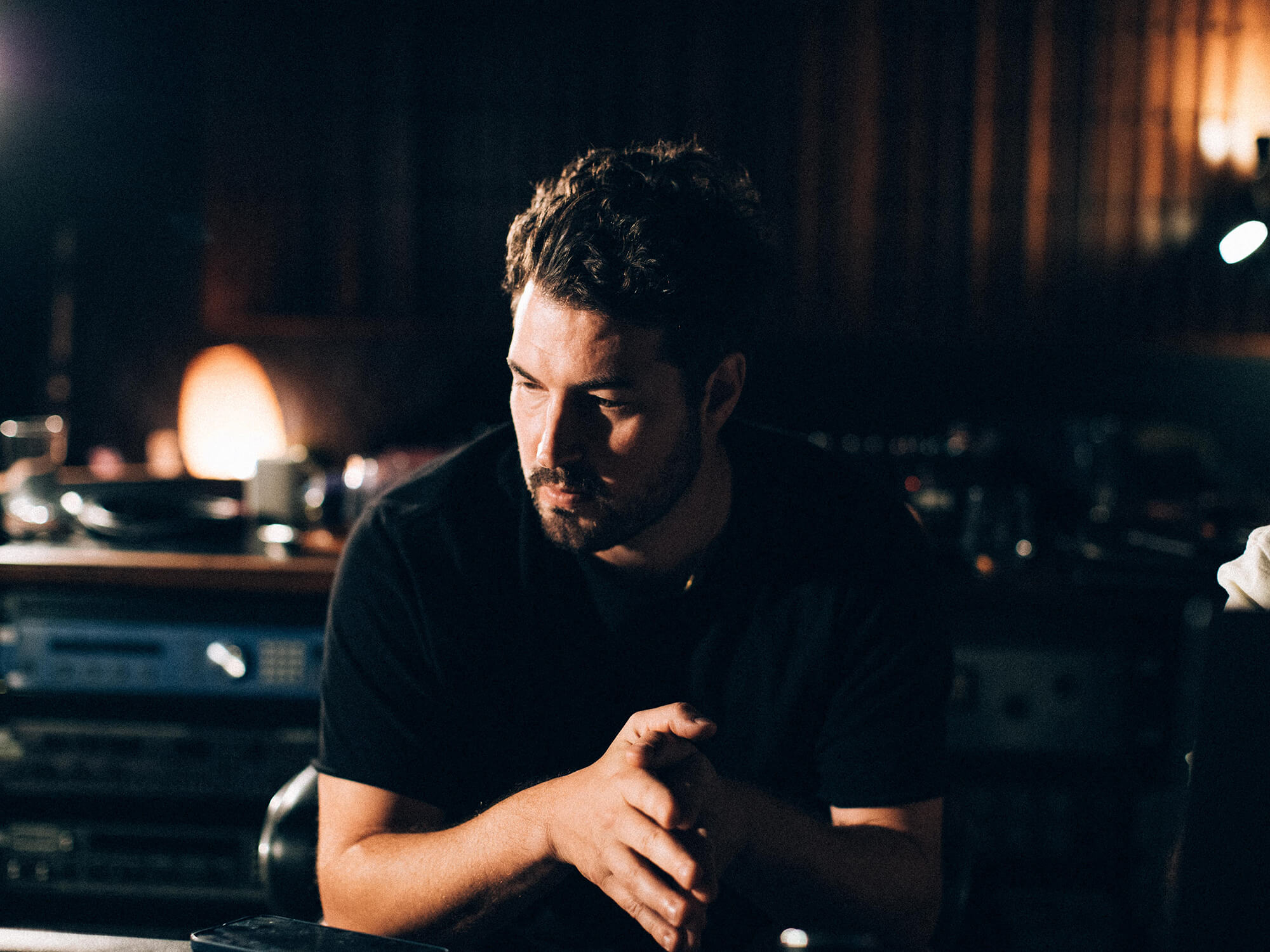 With the Sydney-based Hayden James buzzing off the back of his second album LIFTED, he shares the secret ingredients to his studio setup.

While his home studio offers impressive sound-proofing — allowing Hayden to work late at night while balancing family life — much of the album was made when hopping between studios around the world, crafting shared stories with talented friends. Whether it’s shaping synths around crisp, cleverly processed vocal licks or achieving distinct riffs through successful studio jams, Hayden James is a keen collaborator.

Hayden talks us through his studio, why working with others is building his bulging studio wishlist, as well as some of the special moments that went into the album’s standout tracks, such as lead track Lifted and I Won’t Let You Down.

Hi Hayden! Congrats on your second album, Lifted. Where was the album made? Do you prefer making albums?

Thank you! The album was made in Sydney, Melbourne, Los Angeles and New York. However, the majority of the writing was from my studio in Sydney. I enjoy creating a body of work that can tell a whole story over just one single release. I feel it’s a much more powerful statement and something I enjoy working on.

Lights Go Down with SIDEPIECE is sounding like an anthem already. How did you end up working together?

SIDEPIECE and I have a mutual friend that told us we should connect. I was in LA with Dylan (half of SIDEPIECE) and Ricky was at home in Florida so he was on Zoom with us.

We were locked out of the LA studio for half the session so we just sat outside and worked on the track on our laptops. Ricky also sent over some stuff and we wrote the instrumental in an hour and a half – max! I had a vocal from Boo Seeka, who is a friend of mine that also features on the album, and that fit well with what we were doing. Dylan and I finally got in the mic room and recorded the chorus and that was that.

It’s one of my favourite tracks on the record and is super summery – a big nod to [2018’s] Just Friends. Our workflows complimented each other, considering how quickly we got the piece together. It was a natural session and the guys were easy to work with.

Tell us a bit about the studio, Hayden

I have a studio in my house that I built with a friend about three years ago, just before the pandemic. It’s a room within a room so it’s completely isolated and I can make sound into the wee hours of the night and not disturb my two little kids.

The room is made for two people maximum; it’s a small room but it’s perfect for what I do. I’ve got a whole bunch of outboard gear, a lot of keyboards and big Focal monitors. The room has been acoustically treated, and it’s comfortable to create in there. Most of what you hear from my album and previous records has been recorded in there but I do also write with a lot of other people and hit up their studios, as well.

One of the tricks I always do is pull up some of my favorite video clips and mute them, and then I write a new score to them. I should get some old band posters and some more colour in my studio, for sure. I don’t burn sage or anything in there but I don’t think I’m far off.

It would have to be the Sequential Prophet 6. It’s my go-to for when I start writing a song. It doesn’t just sound amazing but it’s also easy to use. I don’t have to dive into menus to get what I need, it’s just all there and ready to go. It’s featured on nearly every song I’ve ever made.

What synth or effect can be heard the most on your new album, Lifted?

Synth-wise, you hear the Sequential Prophet 5 in nearly every song. Whether it’s Waiting for Nothing ft. Yaeger with the base and pad sounds; or I Won’t Let You Down with pad and key sounds, it’s present all over. It’s mainly subtle bases, stabs and pads throughout the whole album. I find it warm and, as an analogue synth, it has its own wobble to it. I love Dave Smith’s instruments and the Prophet 5 is just incredible.

Were there any special moments when making the album when a sound you’d created really stuck out to you — a real ‘wow’ moment in the studio?

I’m lucky enough to say that there were quite a few of those moments writing LIFTED. It all started with the title track, Lifted – when I wrote those chords for the first time, I got goosebumps. For me, that is the best feeling and. I Zoom’d Tudor, who is the featured vocalist on that track, and he came up with the most beautiful melodies and it went on from there.

Also on Waiting for Nothing, Yaeger’s drop on the vocals felt so special. On Fade, it’s when the bass hits for the first time and the incredible vocals from Flynn.

One of the most touching moments for me was writing I Won’t Let You Down. I had a good friend of mine pass away in the pandemic and I was thinking about him a lot. I was putting some chords together and I felt this pressure in my chest that I had never felt before. I felt like he was in the room with me. I can’t even describe it.

How did you let SIDEPIECE’S vocals take the reign on Lights Go Down?

We actually wrote the groove to that first and then it’s myself and Dylan singing the chorus. Ben from Boo Seeka sings the verse. We wrote the instrumental and the bass and everything that you hear, and then I put this acapella over the top.

We had to rearrange little bits and pieces but it all fell into place. There was a lot more vocal [recordings] where I wanted to create space to breathe. It is pitch-shifted with a couple of different things including Soundtoys’ AlterBoy, and Ableton Live, too. I also had Ben sing up a couple of semitones and pitched that again so it sounds pretty crazy.

Eric J mixed this record. He’s from Sydney, and he’s put a whole bunch of stuff on there too that I can’t speak towards, unfortunately.

In On Your Own with Elderbrook, there’s an enchanting, floaty hook. How did you achieve this?

That’s a special record because I was able to write with Elderbrook and Cassian. Cassian has helped me mix and produce a lot of records in the past but we’ve never released a track together so this was special to share.

The majority of what you hear is the Prophet 6, especially the lead line. I had Elderbrook’s vocal for about a year and a half before Cassian and I got writing this record. He wrote it to an older instrumental of mine and it felt right to get Cassian involved.

In Hold Tight and I Won’t Let You Down, you feature some lovely piano stabs that are reminiscent of old-school house. Are you enjoying the renaissance this sound is having right now?

I always write summer records, I think. This is the first time that I’ve displayed proper piano-house vibes in any of my records. The keys you hear are a combination of some Kontakt Instruments and EZ Keys, and M1 piano keys.

For me, when writing that style of music and having to be that tight with the piano, it wouldn’t work recording a live piano side – but we did in I Won’t Let You Down by using the Yamaha. It went through a bunch of processing including a tape machine.

By far, my monitors, the Focal SM9s. They’re speakers that you don’t have to turn up loud to get a vibe of what you’re writing. They are quite flat, response-wise but they’re still warm, as well. I’ve had them for about six years so far and I’m not about to let them go.

Try to get the sound you’re after as close as you can get without adding any plug-ins or effects. If you’re working with a sound that you need to get 10 plug-ins for and treat it a lot to get it where you need it to be, maybe you don’t have the right sound.

Don’t buy everything. Figure out what you need and what makes you inspired in a studio. What are you writing? Why are you writing it? Maybe buy one piece of hero equipment that you’ve always wanted and then take the time to learn it.