Based in Barcelona, Gaetano Parisio’s beat making lab is packed with synths, effects racks and drum machines – including a TR-909 signed by Jeff Mills… 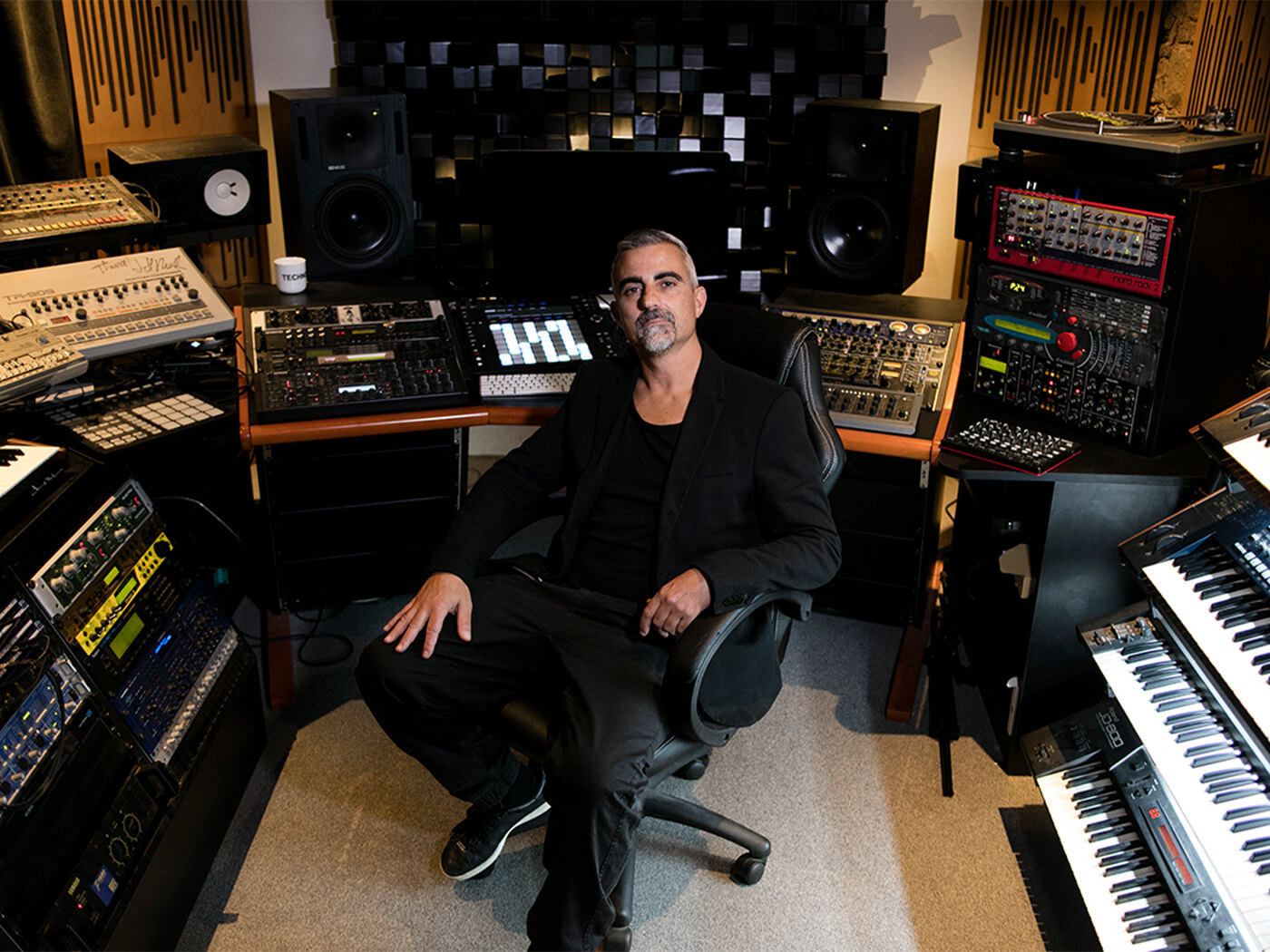 My studio represents fun and working together. I have four music labels and therefore for the majority of the time, I have a professional approach. But there are many other times that being in the studio for me means having fun and above all, to keep learning. The feeling of growth that the studio life can give you is priceless. We always learn something new every time and the reaction is always like that of a child who is surprised to have seen something special for the first time!

Tell us more about the studio, Gaetano!

I moved to Barcelona 3 years ago and the first thing I did was build my studio on the lower floor of my house. Actually, my house was previously an art gallery and had spaces which I then transformed into different living areas. The entrance to my studio is a mini cinema (another passion I have), with a 3-meter projection screen, a console with CDJs and turntables, and all of my vinyl collection. The building dates back to 1860 in the historical centre of the Catalan capital. Like all the studios I’ve previously had, it’s located on the lower floor of my house and therefore part of my bedroom; this is very important for me because I see my studio as an extension of my apartment, a place where I spend a lot of time and where I have the chance to go at any time of the day.

For many years I used to use Logic Pro, but then I switched to Ableton Live, which is what I’ve used for a long time now. When Live 1.0 came out for the first time in 2002, I immediately became interested in it because of the option to use loops produced in the studio and play them in sync when I DJ’d at parties. I appreciated the speed with which Ableton updated with every release until it reached features that other DAWs don’t have or that are much more complicated, such as sample editing or internal routing.

I would say my Drawmer 1969 valvular compressor combined with the equalizer Drawmer 1961, also a valvular. I have used them in almost all of my productions. The use of the compressor for me is fundamental for the result I want to achieve, especially on percussion. For me, the compressor becomes a real instrument. The warmth and colouration of the sound they manage has always thrilled me.

What’s the story behind the signature on your TR-909?

In 1997 in Naples, I had to play in a historical club for the Neapolitan scene: the Cube. Jeff Mills was the guest and, having known him previously, he asked me to use my TR-909 for his performance. After seeing him perform, I was sure he was the only one I wanted to sign my drum machine and I was right! Seeing that signature for more than 20 years in my studio inspires me to try to always do something non-trivial.

It really depends on the period. There are certainly break times that are just as important as the time spent working in the studio. But when I’m focused, I would say that there are no time limits. The average is six to eight hours a day.

Probably the next purchase will be the monitors. I’ve been using my Genelec 1032A for 25 years. I’m super used to working with them but I think now it’s time to try something new. I was thinking about the Focal Trio11 to get even more pressure but the decision hasn’t been made yet. I look forward to trying them as soon as possible!

Yes, I do, and it’s definitely the analogue mixer! I’ve always used it but in the new studio, I wanted a hybrid analogue/digital setup. What I miss the most is the ability to equalize multiple elements in real-time. I consider this crucial to create that final flavour that characterizes my productions. I still can’t do this in the digital world with the same naturalness with which I did with my old Mackie 32/8 (the one built in America).

Dreams are only dreams if you don’t realize them, and I like to dream, so very often it takes me a while to satisfy my desire for an instrument. Today perhaps a mixer would be what I’d like the most. Being realistic on the budget, I would choose the Trident audio series 68, 24 channels.

What is your best production tip?

It’s not so much a trick, but a strategy to work better in the studio. It’s necessary not to waste too much time in being able to quickly find something that can inspire you.
I believe that to be able to immediately enter into a state of flow, you need to have a setup ready for both audio routing and for your machines you use the most.
This will allow you to easily express your creativity especially if you are going through a moment where you have a clear vision of what you want to do. This also helps to ensure you that ‘your sound’ may be more recognizable and this is what you want to achieve as a producer. I think the first 30 minutes when creating something from scratch are crucial for the success of the whole process.

I would probably recommend good monitors. Simply because today almost everything is replicable with plug-ins and software, but the monitors are basic. Everything goes through them and spending a lot of money on machines without having control of the music you produce can lead to frustrating results. If you are on the next step instead, I recommend a polyphonic synth that allows you to cover all the basic needs. I have an Oberheim OB6 but there are more affordable synths like the Behringer Deepmind which has the characteristics I was talking about.