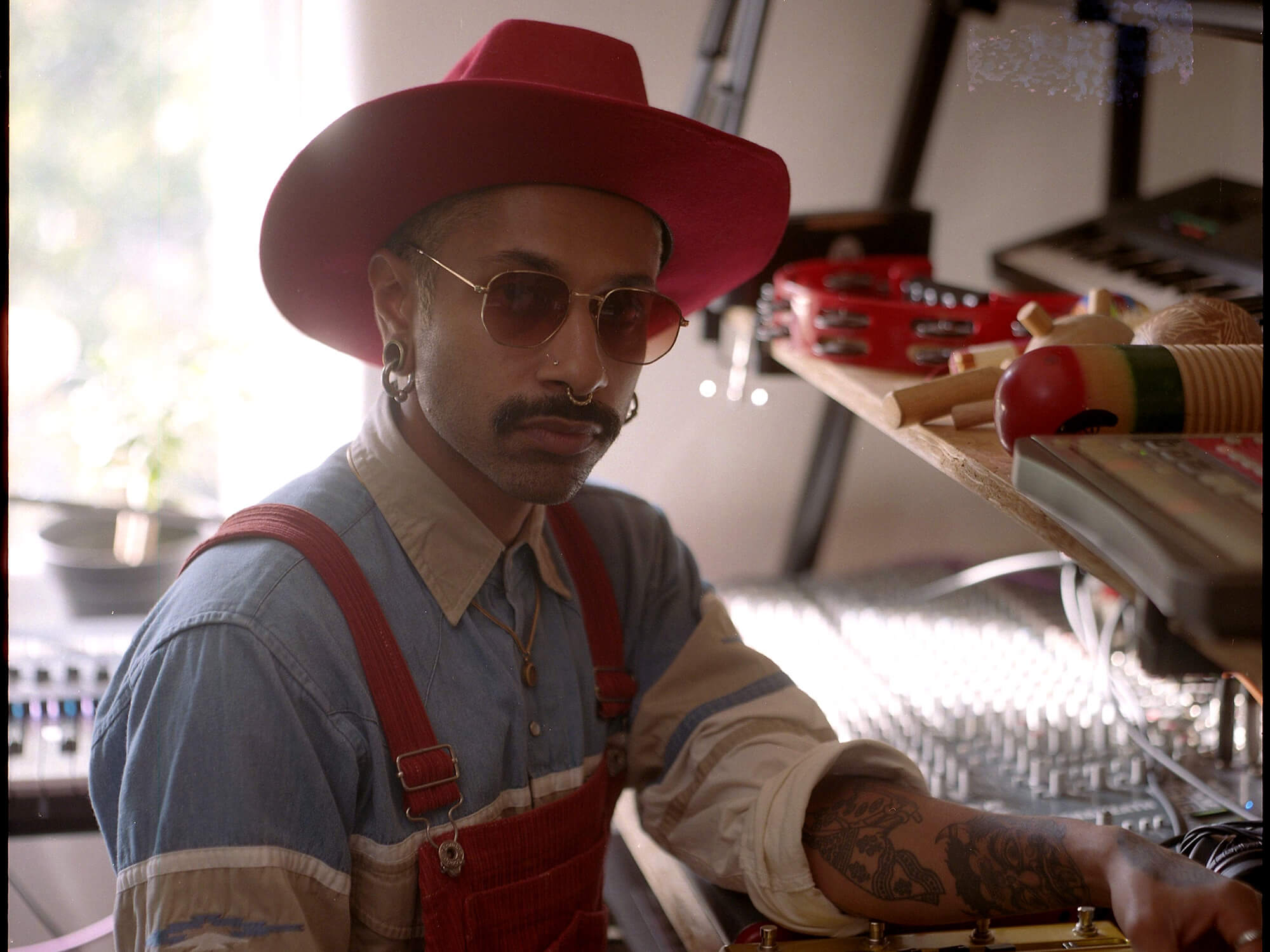 Show Off Your Studio: Flamingods’ Mera Bhai and his South East London space

We talk about the Daytimers collective, inspiration, creating the right studio vibe, and how he worked with vocalist Private Joy.

Mera Bhai is a member of psychedelic rock band Flamingods and a central figure in Daytimers, a collective of South Asian artists that release music, host parties and generally create opportunities and safe spaces for underrepresented artists.

Asides from touring the globe or creating his fifth studio album with Flamingods, Mera Bhai makes music as a solo artist from high up in his flat in South East London. Here, he has created an inspiring vibe with a view and uses the space to make more dancefloor-focused music. We take a closer look at Mera Bhai’s home studio space to find out how he produced his latest single, Be This Way (Feat. Private Joy).

You’re part of the Daytimers crew and the band Flamingods. What can you tell us about either of these?

Daytimers is a collective aimed at championing and nurturing creativity in all its forms amongst people from the South Asian Diaspora. There are around 12 of us on the internal team who, between us, deal with opportunities that come in and try to find the most democratic and inclusive way to bring them to people in the community. We have a zero-tolerance policy towards exclusion and strive to create safer spaces for people of colour to feel like they can be themselves and explore their creativity or opportunities they may not have had access to.

The collective has really grown over the last two years; it’s been so exciting to see how many people have felt a sense of belonging at our events and excitement at seeing so many faces that look like them and listen to the same music as them but they’ve often never grown up having a sense of connection to. It’s also been amazing having the support of all the old heads from the Asian underground movement of the 90s very much encouraging us.

Flamingods is a psych rock band. We’ve been going since 2009, and we’ve spent over a decade touring the globe. I’m the primary drummer but also play synths and occasionally bass – we swap instruments on stage between tracks. We’ve released four studio albums and an EP, three of which were recorded at Total Refreshment Centre in London with Kristian Robinson (Capitol K) and one with Danalogue (The Comet is Coming). We were out in the US earlier this year recording album number five with a very exciting producer, in the most insane studio I have ever seen (analogue gear heaven). I can’t spill the beans on that but the record will be sometime in 2023, and we’ll be back on the road – which we are all very ready for.

How did the collaboration between you and Private Joy come about?

Private Joy and I have known each other for years. She’s one of the most talented polymaths I know. She was playing an amazing DJ set at a festival in the UK that Flamingods were playing at. We connected and asked her to play at our following London headline show.

I found out soon after that she was in the Lovescene collective and has the most incredible voice. I reached out to her a couple of years ago and sent her a bunch of tracks to see if she vibed with any. She picked a very early demo of Be This Way, laid down her verses on it and sent it back. I then ended up reworking the track around her vocals. The original version was a bit more Chicago house – sounded totally different to the current.

The studio is in my flat in South East London. I’m on the third floor with a lovely view and massive window (blessing and a curse for obvious reasons). Having natural light and sun in the studio was always really important to me. I feel like the dark boxy rooms just kill my vibe.

As a writing and production studio, pretty much all my work is completed here. The idea behind my studio was to create a space that was conducive to me evolving my process and getting my gear working together in interesting ways – very much trying to avoid falling into any patterns with a process where I do the same thing again and again, or having a go-to writing process.

I’ve got a synth rack with my mixer, synths, sequencers, drum machines and turntables on. Pretty much everything is connected to my Unitor 8 MIDI controller, then my mixer, and my Novation SLMKIII as a controller for all the hardware.

I also have a drum kit (I’m very grateful to be endorsed by Ludwig and Istanbul Agop), so I track drums here too, which is handy as I spend hours practising and coming up with new grooves so it’s useful to be able to record stuff that I can then chuck into tracks.

The atmosphere in here is calm. As a creative with ADHD, I need to ensure that the space is as uncluttered as possible while also being vibey; plants, pictures and records on the wall, useful places for me to put up notes. It’s got to have a vibe but also be focused. It’s important to not just have sound treatment everywhere with no pictures for creative flow. Getting the vibe right is a priority for writing.

I use Ableton Live. I started out back in the day on Steinberg Cubase, and moved to Apple Logic Pro, which I occasionally use if I’m making any tweaks to session demos with the band. When I started noodling around with Ableton around 12 years ago, I found it the most user-friendly, and my capacity to get my ideas down plus the potential to go deep into production (rather than just tracking and editing) felt far superior to me to the other DAWs I’d been using.

It’s a tricky one! Probably the Korg MS2000. I feel like that synth gets a lot of flack but it’s such an unsung hero of the late 90s. It’s a dual oscillator but you can get such a huge sound on it, as well as having really great control over (dual) LFO, filters and mappings.

What synth or effect can be heard the most on Be This Way?

We’re instantly drawn to the vocals on Be This Way. How have you let them glide so effortlessly over the rest of the track? They fit so well.

Honestly, it’s Private Joy’s voice that’s done all the work there. Not much was needed for them. I have a few vocal processing chains I use and then tweak, add saturation, chorus, slapback and obviously a nice big reverb. I actually took the track to my friend Lawrence Hart (also a brilliant producer) who helped me take it over the finish line. Sometimes when I work on something for too long I lose perspective with it. Think it’s important to know when to step back.

I’ve got my eye on the 80s Boss KM60 six-channel mixer. It defined the sound of acid house – everyone had it at the time and the preamps sound amazing when cranked. Synths, guitars, and drum machines all sound awesome through it.

I’d need a studio big enough for this, but I’d love an SSL duality delta 48 channel console. I like to be outside the box and having a setup like that would mean that you’re able to be more present in the process without being glued to the screen (if that’s what you wish for). Obviously, the sound is a big factor as well.

If I was stranded on a desert Island, I’m not envisioning a power supply around! . Honestly, I would be happy with my drum kit for the rest of my life. I could do enough with that. It wouldn’t even need to be percussive as you can pitch the drums.

Stream or buy Mera Bhai’s latest single, Be This Way, on the artist’s Bandcamp.