The duo reflect on a decade in the game in their decidedly chaotic studio. 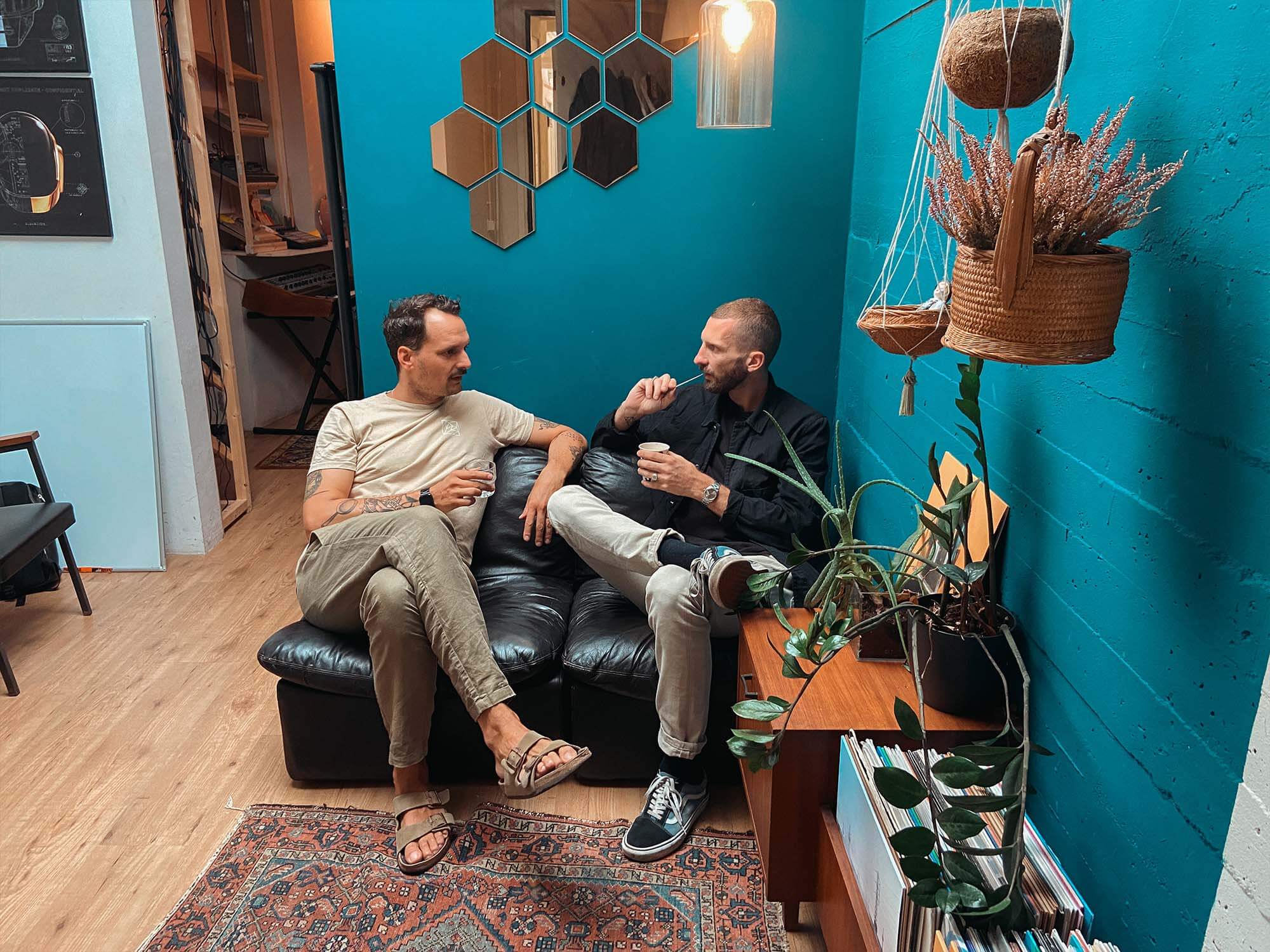 We pop into their multi-roomed studio in the Volkshotel in Amsterdam to discover how they’ve created a balance of deadline-based work and week-long creative sessions that fit in around their busy schedules. We also take a look at some of the studio gear that’s become staples in their day-to-day sessions.

Dam Swindle! You’re celebrating 10 years of making people dance to your infectious grooves. What was it like revisiting your work for Keep On Swindling (parts 1 & 2)?

Maarten: Last year, we took the time to revisit our catalogue to see which tracks defined our sound, which tracks became hits, which tracks deserved some new attention and which tracks stood the test of time. We released a lot of music in the past 10 years – 2 albums, several dozen remixes and more than 20 EPs – so, naturally, there was a lot to listen to. It was really nice to open those old projects again and see our workflow back then. 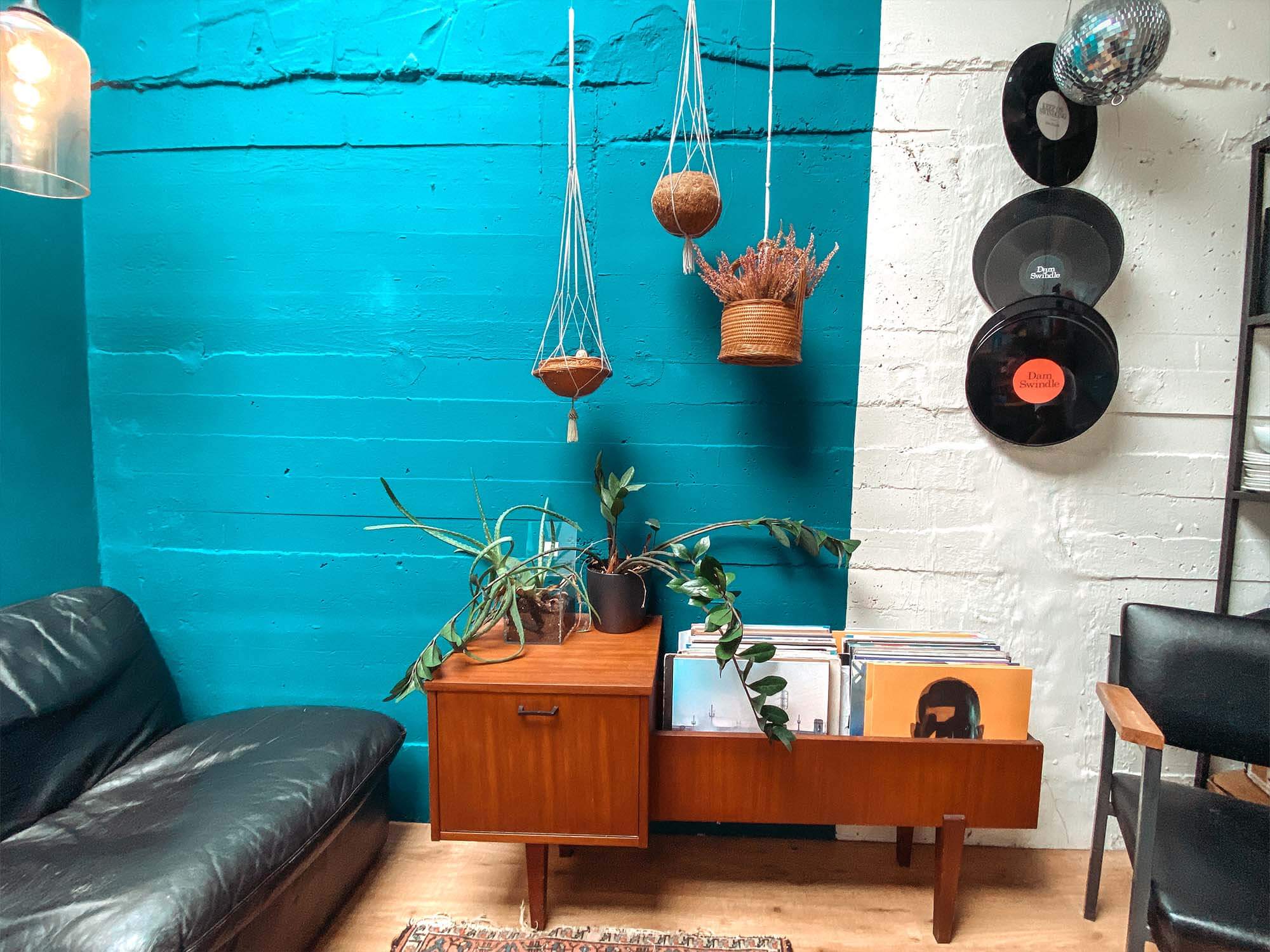 Some of the tracks are reworked tunes, others are new. What did you want these new tracks to say?

The idea of three releases – the last one comes in December – is to show a bit of the past, present and future of the Swindle sound. The new tracks definitely have a different vibe to them. Obviously, we learned a thing or two about mixing and we’ve gathered quite some hardware over the years, which made it easier to jam together and make tracks sound just the way we like them.

When we started, it was just samples, a few VSTs and one laptop with Ableton Live. We then moved to our studio in Volkshotel Amsterdam, where our setup grew. A year or two ago, we traded the analogue desk (Midas Venice 320) for a fully digital setup where we can record everything at once, which really helps to let the creativity flow. It’s quick, close to latency-free and a lot of fun.

How have you operated so well as a duo all these years?

We both have our specialities and our preferences. Our way of producing is similar, which makes it easy to work together, but we’ve also learned to let the other try out ideas, even though that idea might be totally opposite to yours.

The challenge of being a production duo is to shape a sonic world that has the right amount of both your identities. There are always going to be some tracks that have more of Lars’ vibe than mine, but the key is to stay vocal about what you want from a track and give each other some space to explore their own direction from time to time. 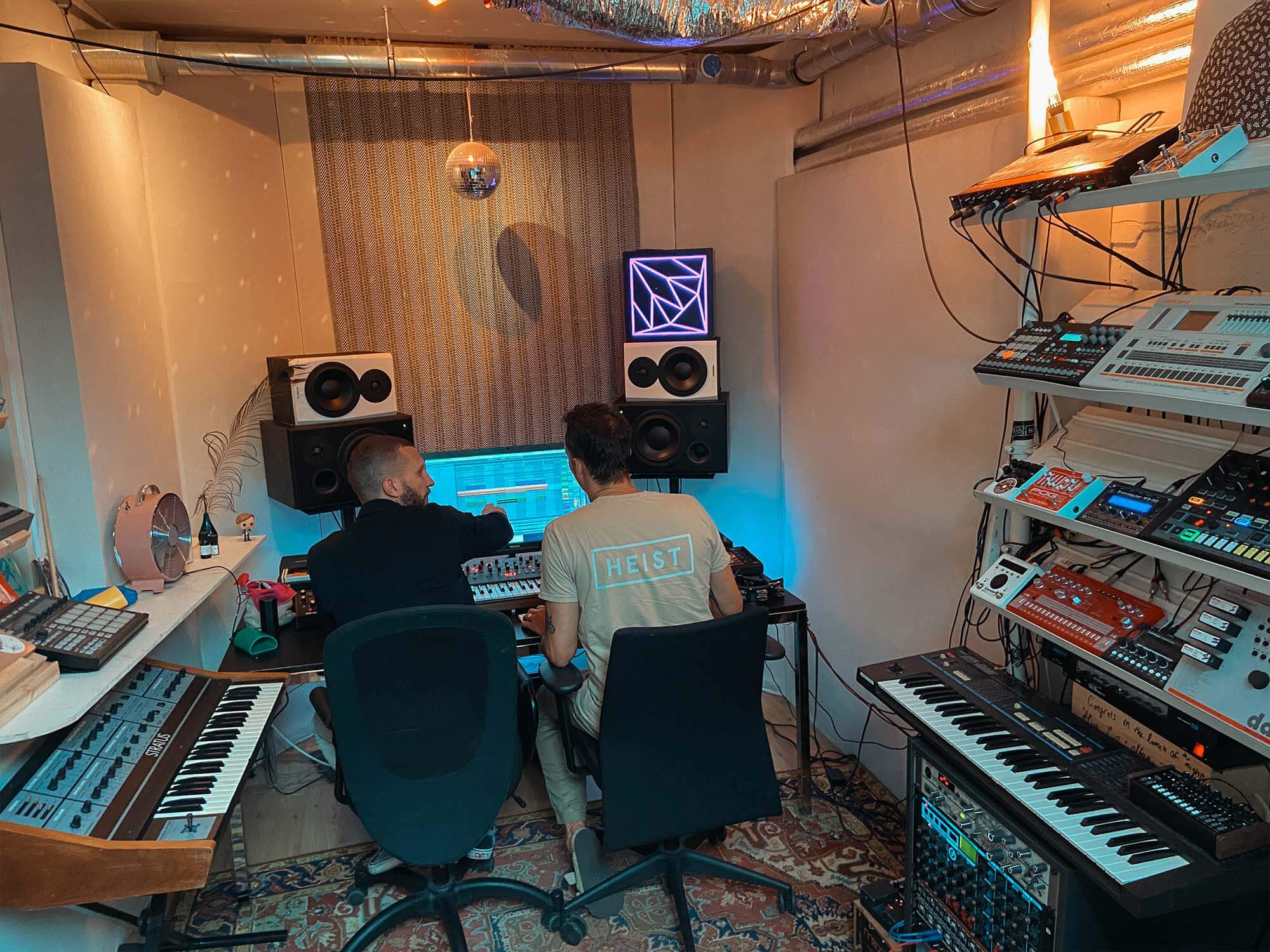 Our studio is in the basement of the Volkshotel in Amsterdam. We’ve been here for nine years and even though the space took some time to get used to in terms of mixing, we’re happy here.

We’ve built custom panels to reduce reflections and have recorded the room with a mic and Sonarworks to create the right EQ setting and even out any balancing issues.

We’ve got a separate recording room that’s completely dry, or at least, used to be completely dry before it became part storage for the Heist catalogue and our record collection. We record everything from vocals to horns to percussion there.

We have a very unorganised workflow, but it seems to work just fine. Tracks can start anywhere – in the backseat of a car, on a plane, at home; concepts come when they come. That’s also why we love Ableton Live and have a ton of VSTs, from synths to processing; we made sure that recording an idea can work anywhere.

The studio is the place where everything comes together: mixing, arranging, and pre-masters. A bit of a wider room would have been better since it’s two people producing, but we make it work.

We’re not the most organized (or clean) so we just embrace a bit of mess in the studio. To be honest, we seem to be the kind of guys that strive with a bit of chaos around us.

Most of the time, we treat our studio days as proper working days. There’s always a deadline to work towards, a project to finish and, since we’re running events, creating merchandise, running the label and working on music projects outside of our regular releases, our weekdays are pretty full.

We then plan full weeks, stay in the studio day and night, and let the creativity flow; we smoke a joint or two, get some incense going, experiment with our gear without being on the clock, that sort of thing. 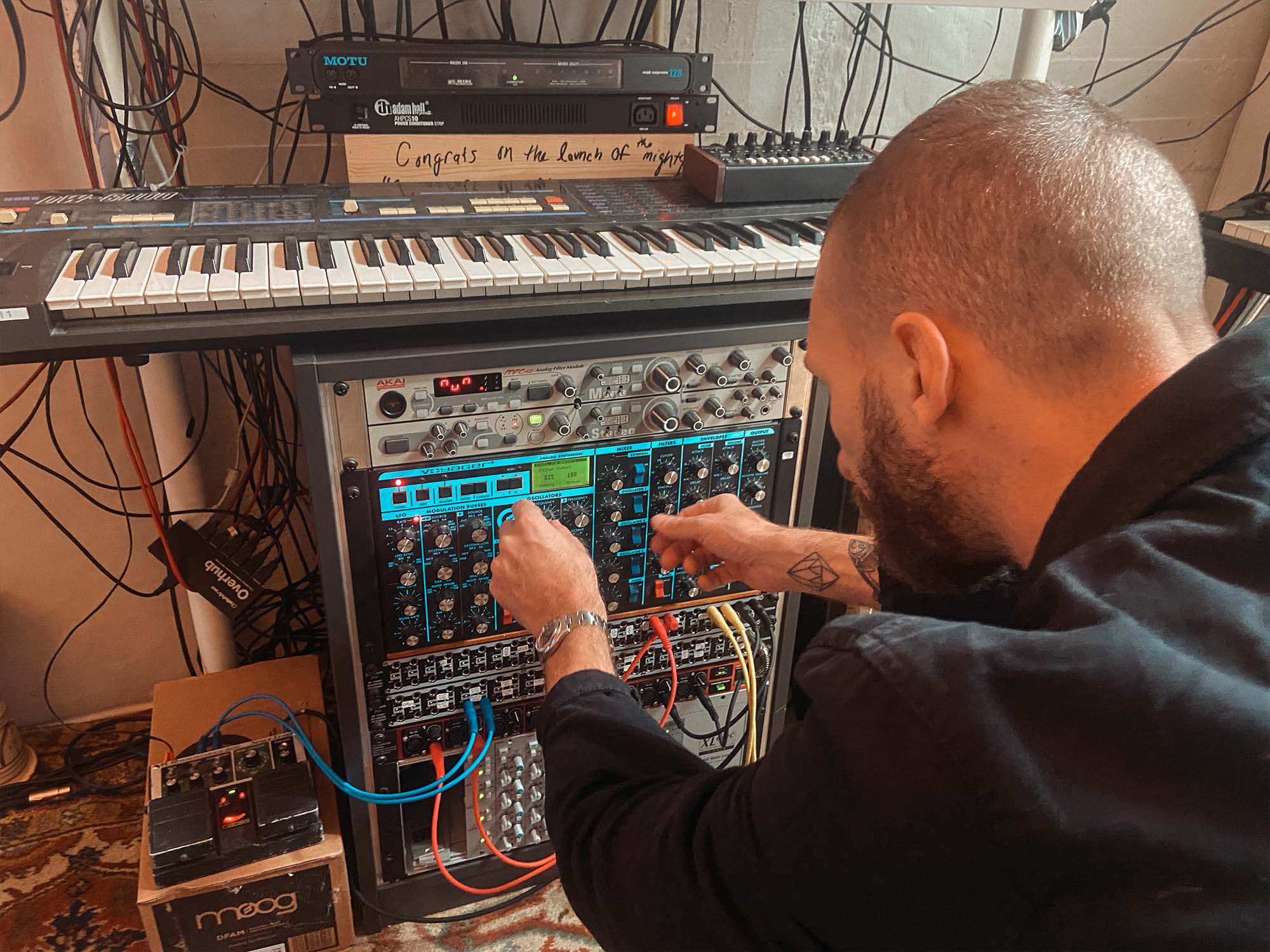 We’re both full-on Ableton heads and are currently running Live 11 suite and really enjoying it. It’s user-friendly, flexible, and works well for sharing.

One of our first synths was the Korg Monopoly and it’s still our favourite machine. We’ve modded it so it runs with MIDI and the mod we have (Tubbutec) also has a few nice polyphonic perks and arpeggio settings you can tweak to freak things up. The thing I love most about the synth is its versatile warm sound. You can go raw and crazy, but also make lush pads, boomy bass sounds and cool leads. There are no presets, so you just have to tweak, play and record whatever you have got running at that moment. Love that! 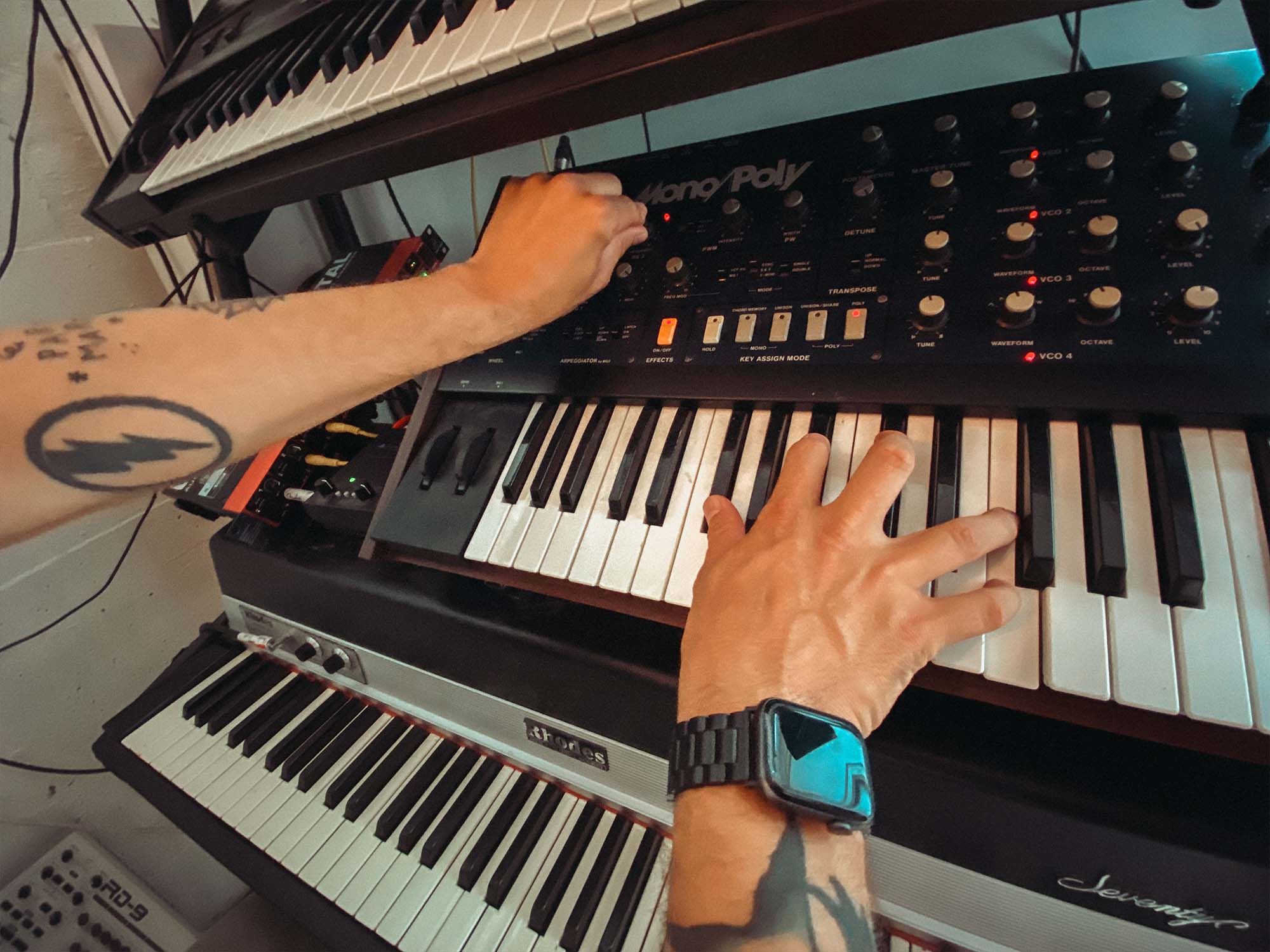 What synth or effect can be heard the most on Keep On Swindling?

Our Fender Rhodes. There are little hits and recordings everywhere on all the records in the KOS series. In terms of effects, it’s probably going to be the Soundtoys Echoboy. That’s such a versatile effects tool.

We dug up the old project and took away all the processing we had on it back then and started over. We were missing a bit of presence and fatness in that mix and it was mixed with more elements through the middle than how we’d mix it now.

We filled EQ gaps to make sure that the overall balance of the song improved. We added some parallel compression to the percussion group with an API-2500 compressor and the Scheps Omni Channel mixer to give it a bit of a blend and to beef them up a bit. We gave the main vocal a bit of air with EQing and the Butch Vig stereo vocal plugin.

All I Want is a high-energy track. What tools helped you create the bass and key stab sounds that add to this energy?

The bass was recorded with the TAL SH-101 Bassline VST and treated with the Soundtoys Decapitator and Radiator for a more open and raw-sounding bass. The key stabs are vintage Swindle: a combination of various instruments together that form one progression. There’s the Rhodes hit just before the one that gives the swing and the other parts I believe come from the Arturia Casio CZ VST.

There is different processing, wideness and EQing to give each element its place in the mix with the Echoboy, Fabfilter Pro-Q3 and Reel ADT2v for some movement. The Maag EQ4 is placed over the open synth hit for more air. 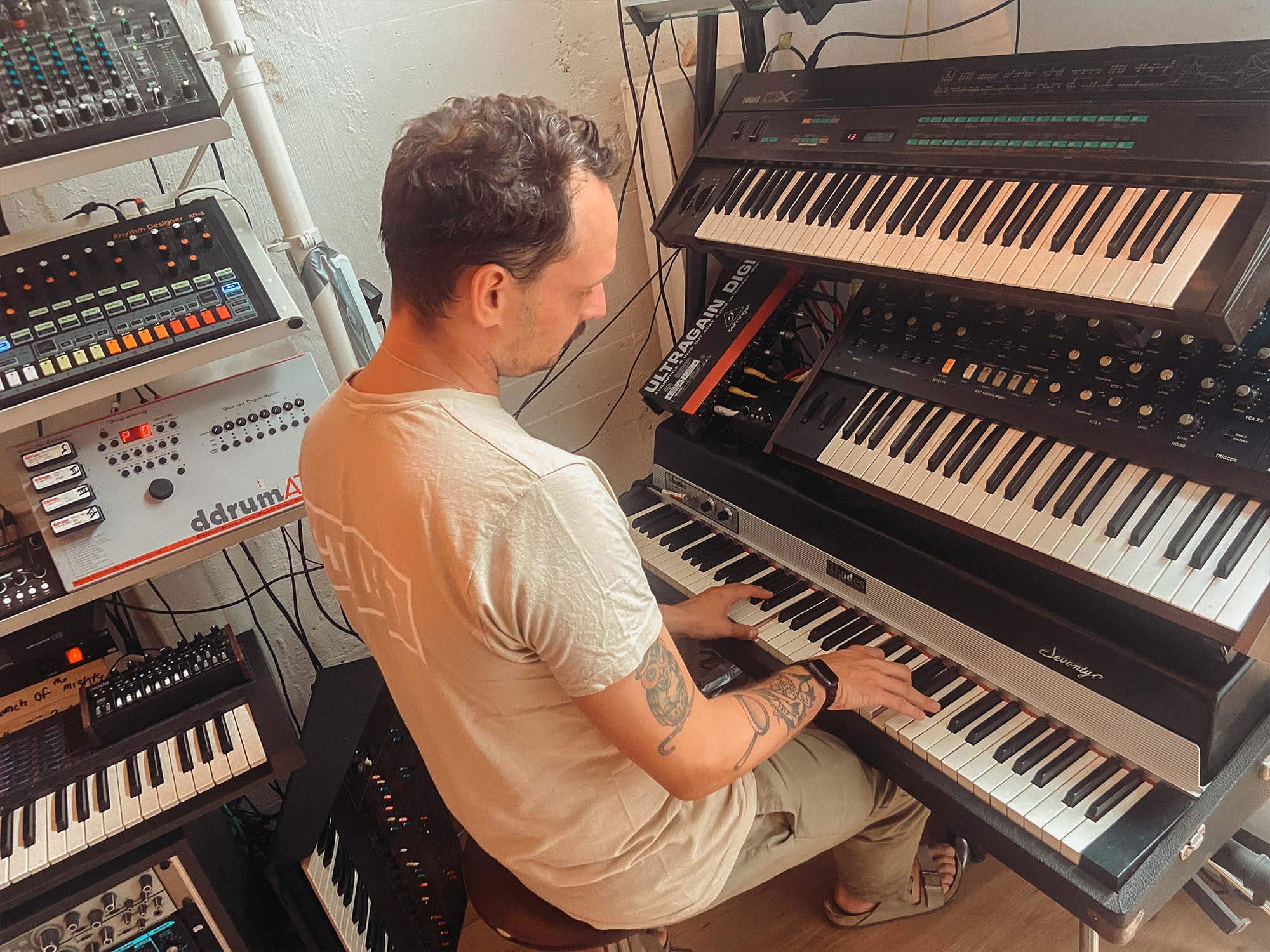 Dangerous question. We’ve set a rule that we can only buy new gear when we’ve mastered all the synths we currently have, and with the MFB Dominion 1, Yamaha DX7 and the Moog DFAM that aren’t fully integrated into our workflow yet, we’re not quite there to add something new. Still, though, the Moog Grandmother is high on the list, as is the modular gear from Make Noise like Maths or Strega.

Everyone can learn a technique for producing and mixing a track that sounds technically similar to any other track. The single most important thing you can do as a producer is to find your own voice.

Get creative, find out what you like, and build your own sonic world. If your mixing is terrible, there’s someone else who can help you fix that. If your ideas are terrible, you’ve got a bigger problem to fix.

Stream/buy part one and pre-order two (out 23 September) of Keep On Swindling via the Dam Swindle Bandcamp and keep an eye out for part three in December.