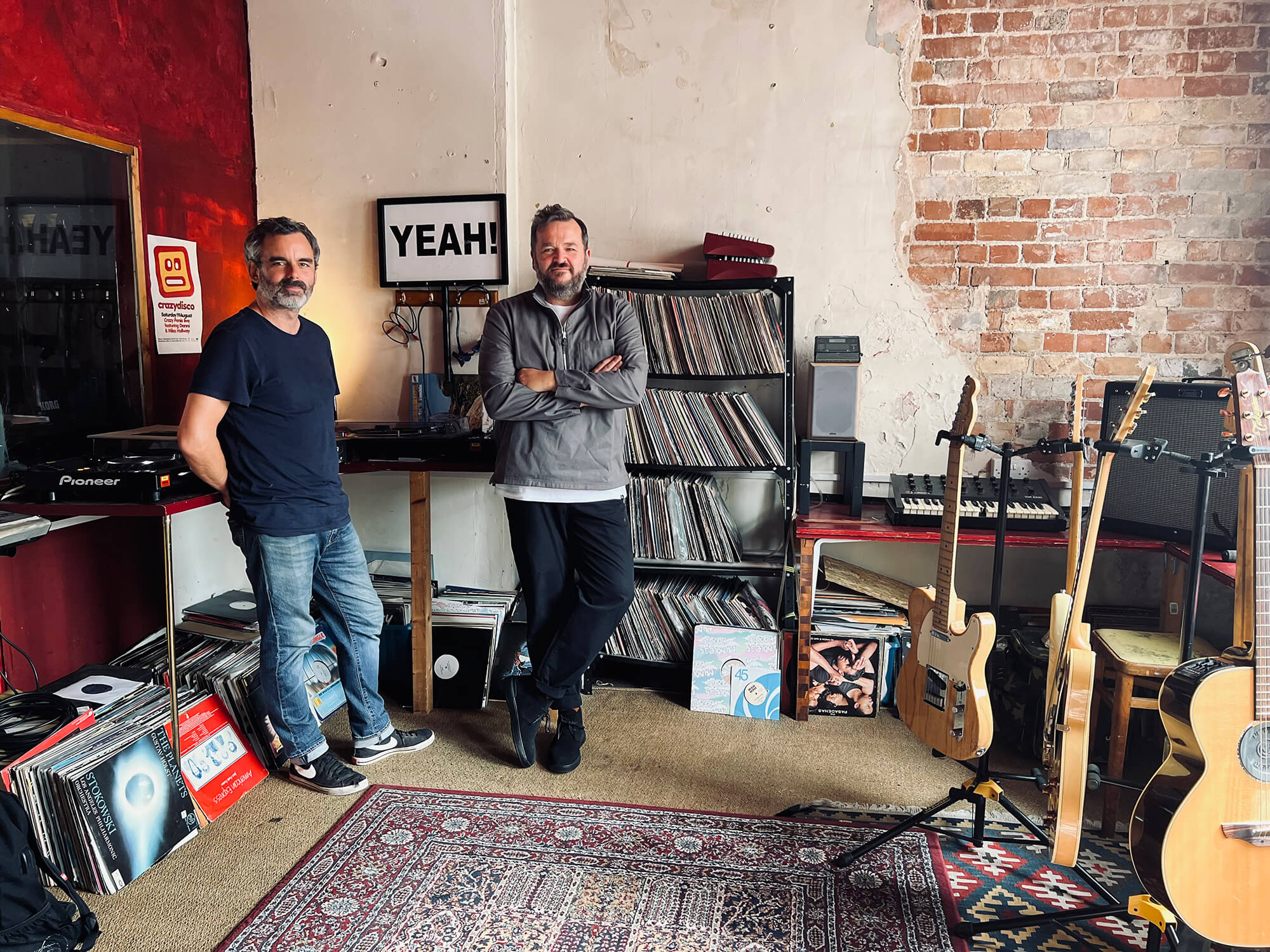 Following the release of Age of the Ego (Remixes), the Nottingham-based disco divas talk process, production and remixing.

Crazy P, led by singing and songwriting force Danielle Moore, and with producers Hot Toddy, Ron Basejam, Tim Davies and Matt Klose, make moody, funky music raw with attitude – and it’s been the case ever since they sprung onto the scene as Crazy Penis back in 1998.

Eight albums deep into their disco divulgence, the British band’s 2019 album Age of the Ego was full of comment, holding a mirror up to society, all the while making them dance uncontrollably. Now, 2022’s Age of the Ego (Remixes) EP sees Ron and Toddy, Gerd Janson, Medlar, Dele Sosimi and the late Soulphiction put their own spins on tracks from the album.

MusicTech catches up with James Baron AKA Ron Basejam and Chris Todd AKA Hot Toddy in their cosy, Nottingham-based studio to talk processes, production, gear and remixing.

Crazy P! It’s been three years on since the release of your incredible eighth studio LP, Age of the Ego. Is it an age we’re still living in?

Yes, very much so. The album and its title was in some part born out of anger and frustration at the political climate at the time (Trump/Brexit), but more widely a comment on the rise and rise of a society more focused on the individual, exasperated by social media. Unfortunately, I don’t really see any change in course on the horizon.

We still listen back to 1998’s The Wicked Is Music and move our feet. Eight albums deep, you’re still finding that groove. How do you find it? And has innocent beatmaking fought a battle with message-based songwriting over the years? How do you balance the two?

“Innocent beat making,” [laughs] – that’s a very good way of putting it, and sums up what me and Jim were doing in the early days, mucking about in bedroom studios, having fun with samples, and not really thinking too far into the future. With Dani on board, the progression into a more lyrical zone was fairly natural. Dani generally writes all the lyrics and we still get to have fun digging for samples and experimenting in the studio. No blood has been spilt yet!

Let’s talk about the star-studded Age of the Ego (Remixes) EP. Given your collective experience in remixing, what do you look for when enlisting artists to remix your music? And why were these artists chosen?

We wanted to enlist artists we admire, of course, but also tried to broaden the reach of the album by choosing artists who would push the album stylistically. People like Medlar and Soulphiction are firm favourites – we play their productions a lot in DJ sets. James Welsh is amazing – he has an inclination toward more techno and acid sounds and brings his trademark analogue warmth and grit to his mix. Gerd Janson’s is a bigger, ever so slightly more mainstream sound and turns it in to an electro banger. They all bring something different – we’re really happy with the end product and all the artists have done us proud.

What do you find desirable about releasing a remix EP and having a variety of artists leave their touch on your work?

A good remix gives you a fresh perspective on a piece of music. Remixers we often admire have used the source material in a way that’s both recognisable but also framed within a new context, by the unique style of the artist, making you hear it in a different way. Personally it’s great to see what an artist you admire can do with your work. Broadening the sound and scope of a project will hopefully reach a wider audience, too.

We’re based in Nottingham. Our studio is a short 10 minute walk from the city centre, in a row of old four-story brick buildings with commercial properties on the ground floor. Our building is one of 3 housing artists and musicians and has been a small hub for such activity for about 35 years; we’ve been there for around 20. It’s a great building with lots of character. We rent the whole 2nd floor and have 2 main rooms we work in, a live room and control room, with a viewing window between the 2. No grand idea behind it – it’s simply somewhere to make music; having somewhere separate from where you live is good psychologically and great for creativity.

When me and Jim write together we do it in the studio, and all the serious recording is done there. We occasionally rent/lend it out to friends and acquaintances, but not that often. Having two rooms is great because if one of us is working away on something boring that needs to be done, the other can go in the other room and crack on with something else.

I do quite a lot of work at home, also. I have a small home set up. Thats good for simple writing, and donkey work jobs, and even a bit of mixing sometimes.

It’s fairly relaxed and homely: rugs on the floor, lots of angled lamps, that kind of thing. The live room backs out onto a busy road, so if you pop the window open, you can get plenty of urban vibe, sirens etc. We’ve often captured a bit of that on our recordings. If you get a good siren at the right moment, it can be magic… conversely, the wrong siren in the wrong place…..but thems the breaks! Jim has a fantastic array of joss sticks [a type of incense] that add a nasal dimension to proceedings too. 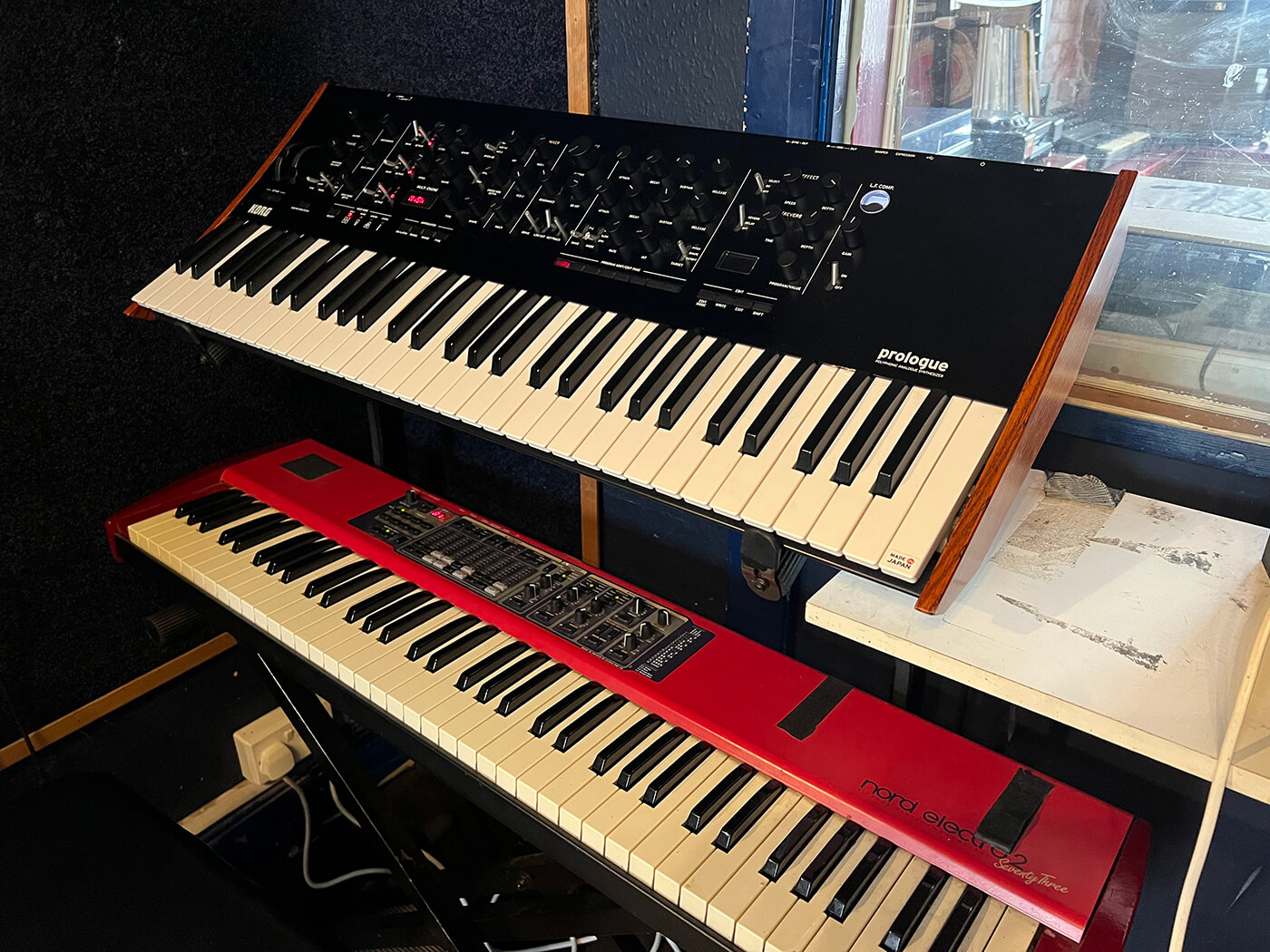 Logic, we’ve used it for years. These programmes are so deep and complex that once you’re committed to one, it’s hard to change tack.

Difficult to pick one. I’ll probably go for my trusty Fender Telecaster. Its nothing special, and ain’t the prettiest, but it’s set up real nice and has been a reliable and trusted companion for many years

What synth or effect can be heard the most on Age of the Ego?

Hard to pick something out here, but I’ll go for the Juno 106. It’s probably our most used analogue keyboard. It’s so easy to use, you can dial something in really quickly. It’s simple but versatile. Examples would be the synth stabs on Barefooted, the big pad break in The Witness and and main intro riff in Lean On Me.

In the studio, you have an eclectic mix of synths, drum machines and records you can sample. How do you avoid choice paralysis when starting a track? Do you have any instruments you often start with?

“Ah…. the tyranny of choice” as Andrew Weatherall once said, I believe. We usually have a starting point that one of us has brought in. Maybe a sample, a guitar riff, a chord progression, a vocal hook, whatever. That provides a bit of an anchor to improvise over. You may end up a million miles away from the starting point, but that doesn’t matter. You need something to start the journey somewhere. Instrument-wise, it’s anything goes really. 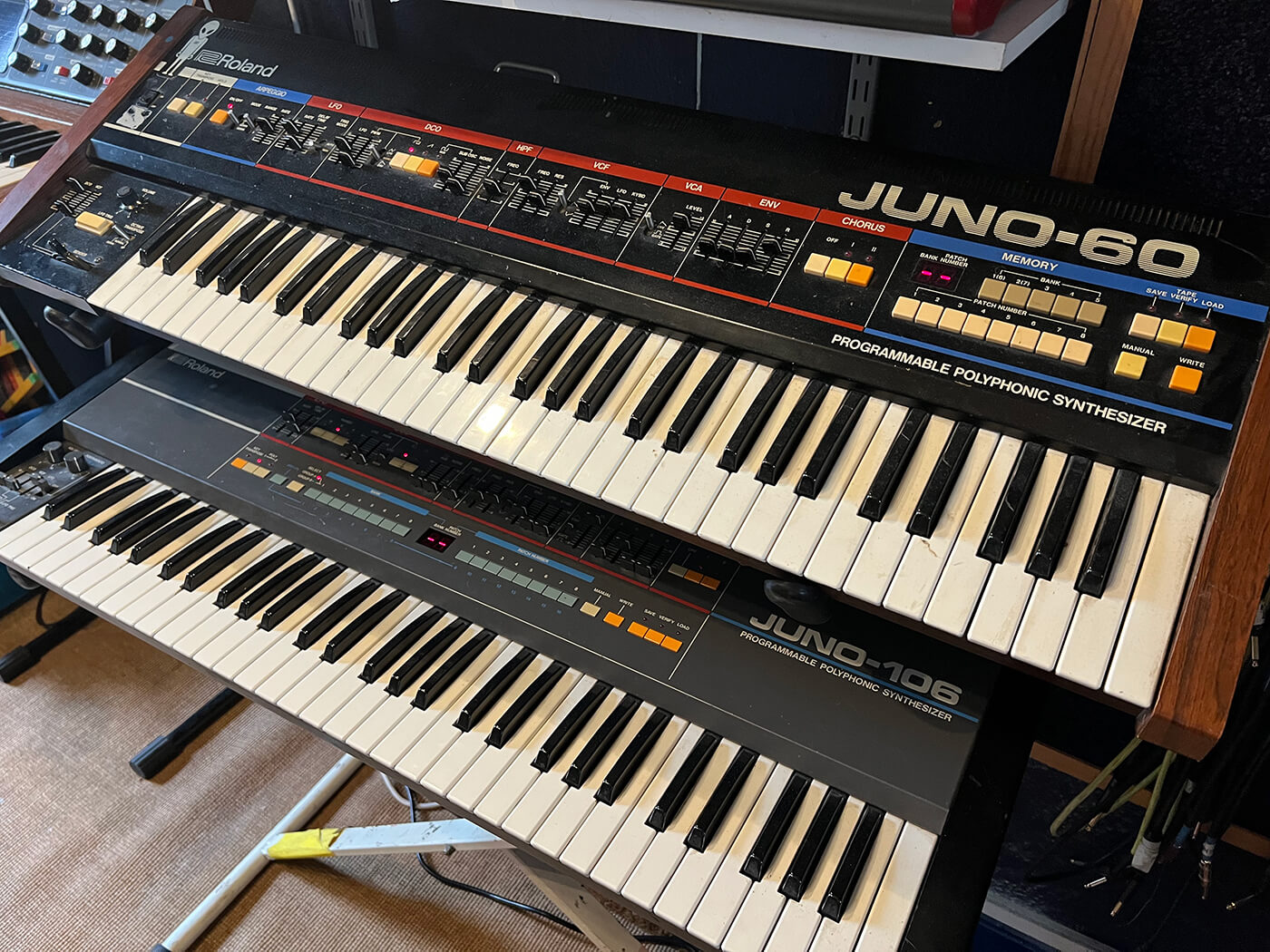 How often do you combine acoustic instruments and electronic instruments? How do both types allow you to actualise your vision?

We do it quite a lot. Acoustic guitars, string quartets, bits of brass, percussion and drums, have all featured in our studio work. Acoustic instruments bring a more complex texture to your music, and work especially well if you leave room for them and allow them to breathe.

Personally, I spent rather a lot of cash on a custom shop Telecaster. Looks beautiful, but doesn’t sound as good as my cheaper battered studio Tele…was it worth it? No! But on a more general note, I think we’re most proud of our modest collection of analogue keyboards. They’re all fairly pricey, maybe the Moog Voyager was the most expensive. There’re some great soft synth recreations of classic synths and we sometimes use them, but no matter what the manufacturers say, you just can’t beat real analogue! 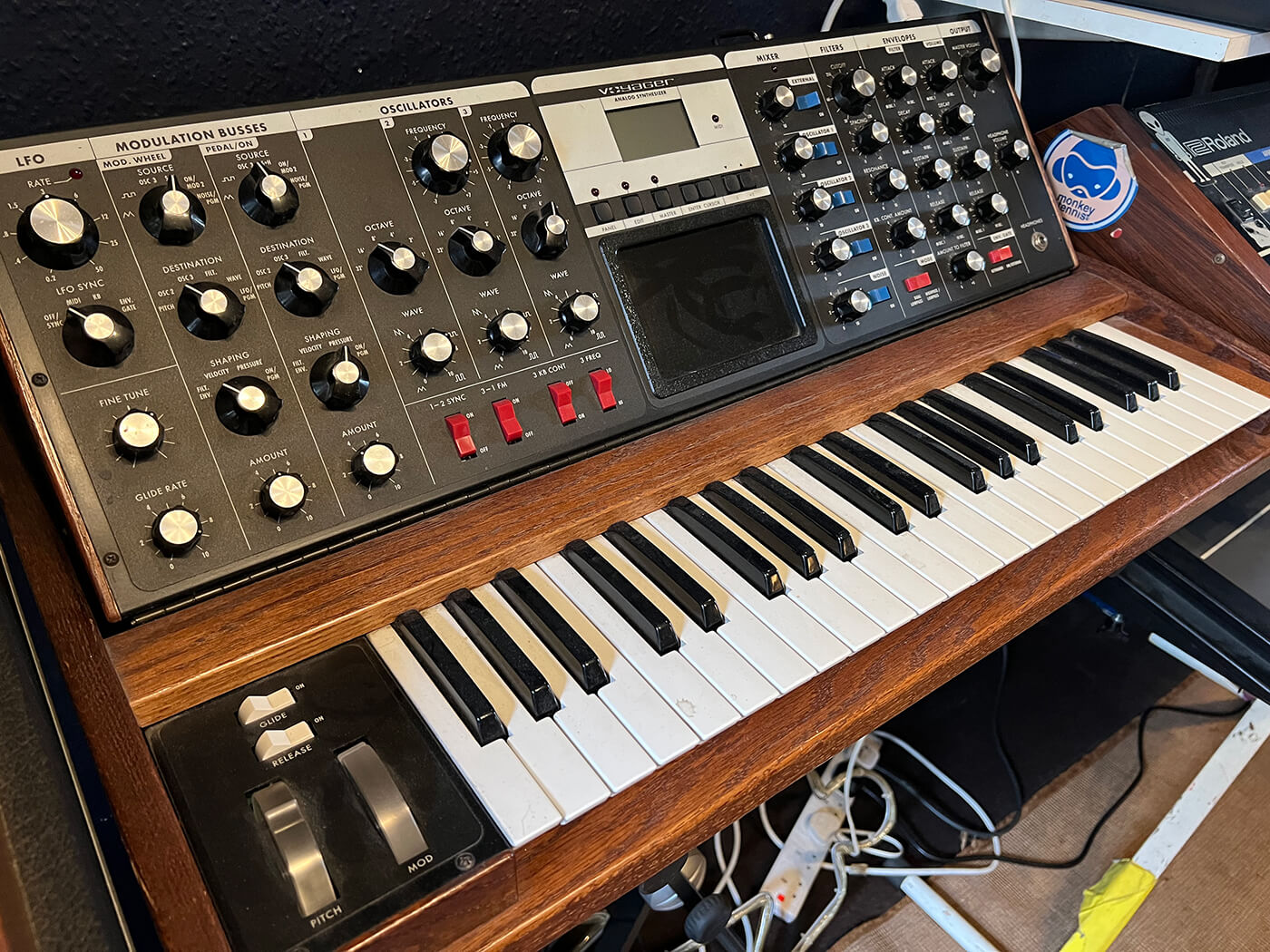 Maybe a decent mixing desk. Jim put me onto to the SSL audio interface, which sounds great on real instruments and vocals, certainly sounds better than the sound craft desk we use. So maybe a small SSL desk like The Big 6.

There’s nothing that immediately springs to mind, but I’ll personally go for an original the Solina String Ensemble. We love synth strings, we use them a lot. We have a Godwin string synth in the studio which is cool, but the Solina is big daddy of string synth and its all about that lush chorus ensemble mode (rubbing hands on thighs). 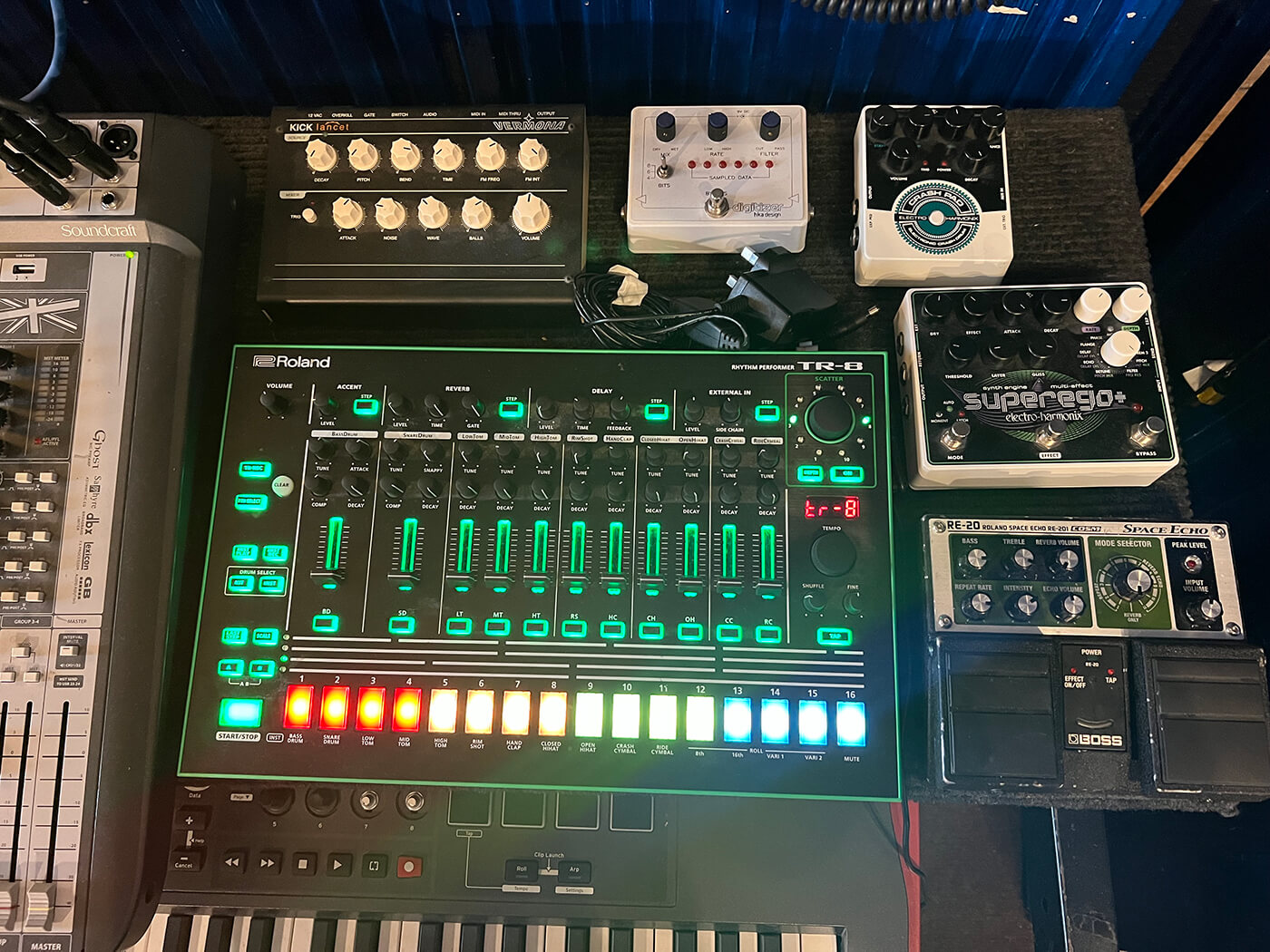 This is gonna be as interesting as your other uninteresting answers, but i’d have to say an acoustic guitar, maybe my little Faith Mercury Parlour guitar I have at home. Versatile, expressive and small enough to carry up a mountain, or take into a small hermit-sized grief hole when times are hard!

Fill it with junk! We’re quite bad, and haven’t paid too much attention to this, but over the years you get to know the quirks of the room and where to stick your head if you want to hear certain frequencies. 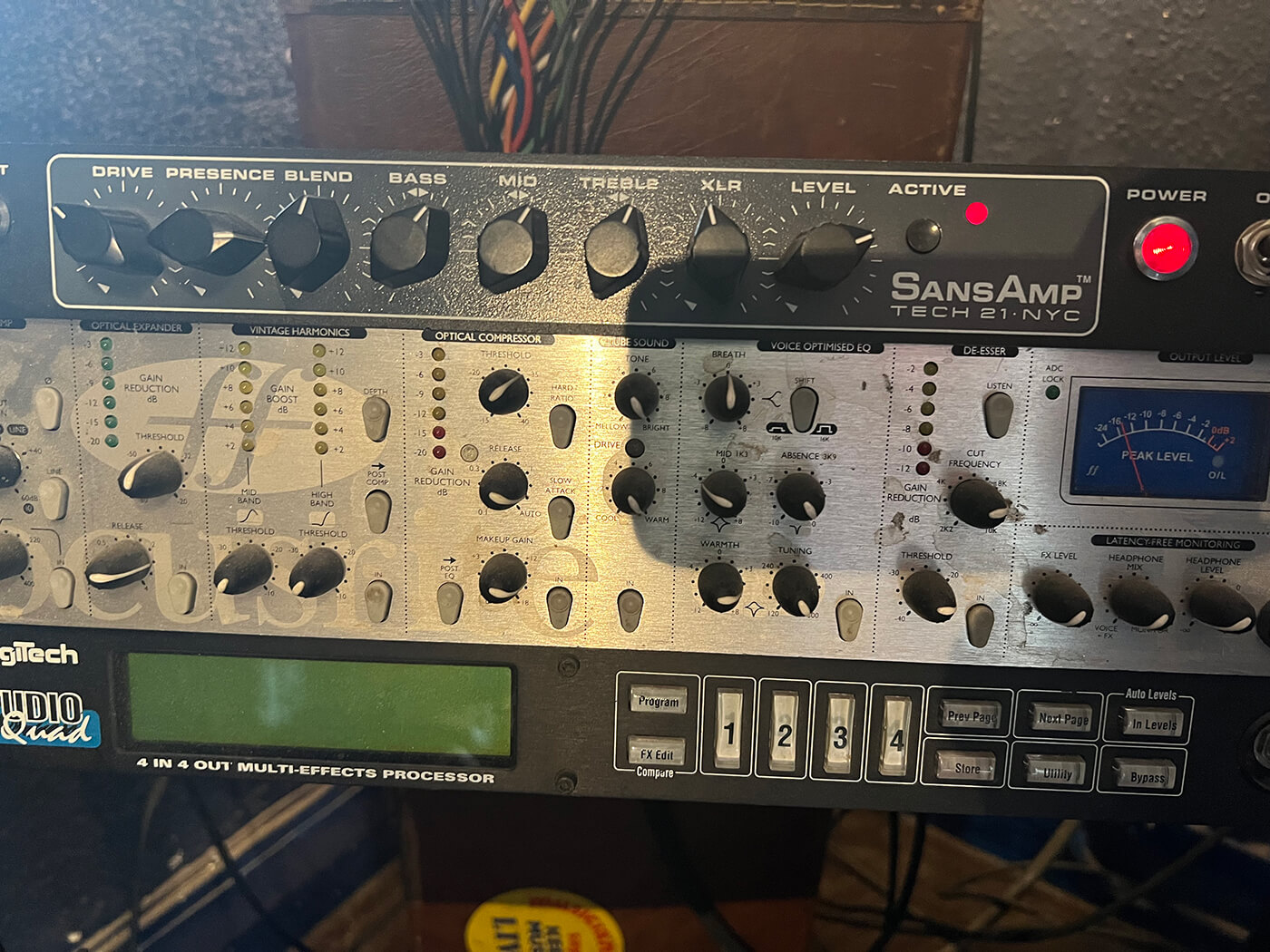 Don’t overwork things. When you work on things for too long, you lose perspective and objectivity, and will start focusing in on small, relatively insignificant details like ‘should the hi hats be 1 db quieter?’ Try and finish things relatively quickly to preserve the vibe that got you excited by the idea in the first place. Get feedback from trusted friends if you work on your own a lot and are struggling to know if something is finished.

Probably get some rudimentary sound-proofing and acoustic treatment!

Crazy P’s Age of the Ego (Remixes) is out now.