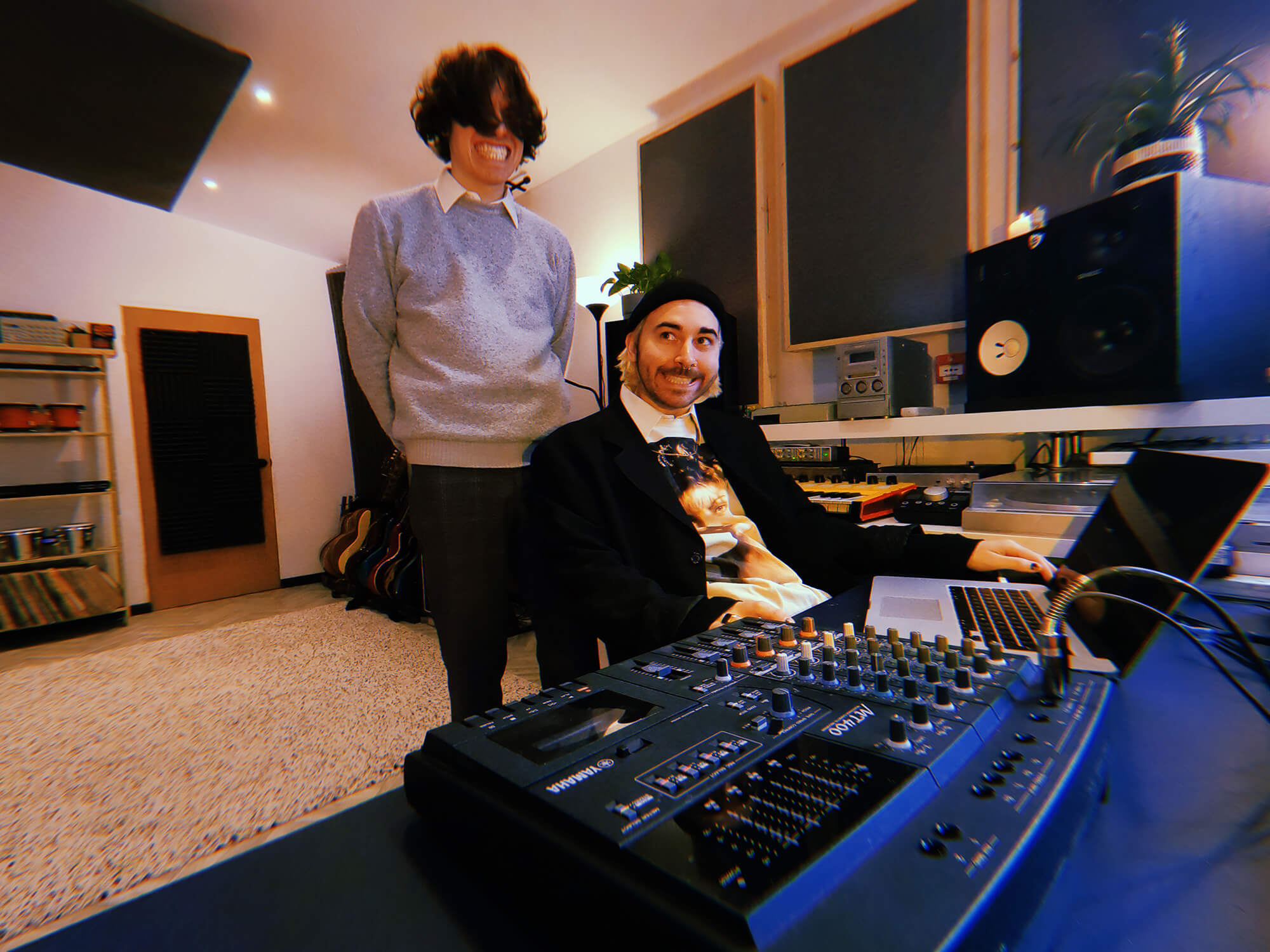 The Merrett brothers talk collaboration, four-track recorders, Madonna and what challenges they faced in building a studio from the ground up.

British brothers Callum and Ewan Merrett ironically go by the name Bad Sounds, despite having their upbeat, groove-laden music classed as Annie Mac’s Hottest Record In The World – twice – and gracing the iconic FIFA video game soundtrack. The siblings have made more sweet sounds for the likes of Arlo Parks, co-writing and producing her 2021 track Bluish, along with Rose Gray, Miso Extra, Max Pope and more.

Originally hailing from Bristol, the Merrett brothers recently packed up their music setups and relocated to rural England for some well-deserved tranquillity. Now based in the Cotswolds, Bad Sounds have dropped a follow-up volume to their EP, Escaping From A Violent Time, Vol. 1, in which they embrace the art of collaboration. We catch up with Callum in their new studio to learn more about their production partnership, why an old four-track recorder is their favourite piece of gear, and what struggles come with building a studio from scratch. 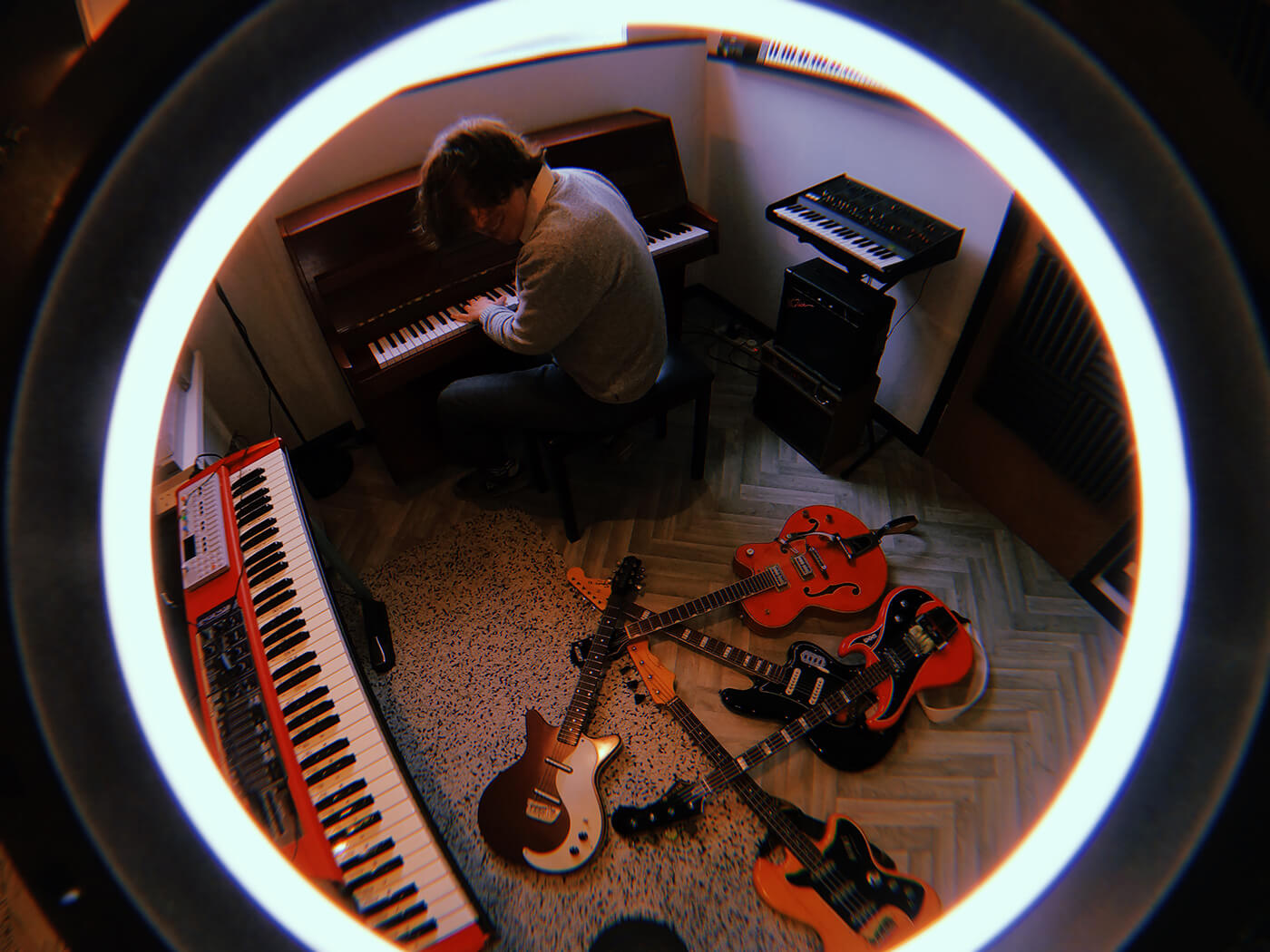 Your latest EP Escaping From A Violent Time, Vol. 2 follows Vol.1 which came out in 2020. Why the EP format for this body of work rather than an album?

“I’m sure we had a good reason originally [laughs]. Escaping From A Violent Time started out as a slightly more fragmented project. We have a varied interest in musical genres so it was originally going to be a completely different vibe for each Volume.

“A slightly raw, scuzzy sounding EP, a soulful, 60s R&B type of EP, and a more beatsy, hip hop vibe etc. But as the songs came together it just made less and less sense to us to release the music in such a categorised way. A collection of songs with a similar vibe makes for a great DJ set, or even background music, but as songwriters you start to notice that some songs feel more exciting when they are played after something that has a slightly different feel to it. That was a very long winded answer, and maybe I made some of that up, but it seems pretty close.”

A defining characteristic of this EP is your embrace of collaboration, with the record featuring BROODS and Ruti. How did you find that new way of working?

“We love it. We write with artists outside of Bad Sounds on the regular, and it’s completely changed us as writers and producers. There’s a lot of freedom to try things you wouldn’t normally try when you’re working with someone else. There’s also often a sense of urgency because you might only have a day or two to work with someone.

“We’ve learned to move pretty quick, and I don’t mean dialling in sounds or setting up microphones, I mean making and committing to decisions and ideas. It’s easy to get stuck on the little things when you’re writing and recording but when you’re collaborating it’s easier to focus on the important parts of the song and work on those first.

“The other great thing is hearing somebody else’s voice over our songs, which can make the tracks sound completely different overall. BROODS and Ruti are some of the sweetest, most talented people we’ve ever met. We owe BROODS so much for taking us on tour in the US, and they came to the UK for a week or so, and hung out in our old studio with us while we all wrote Move Into Me. Both Georgia and Ruti’s voices are stunning – it’s such a treat to collaborate with artists of that calibre.” 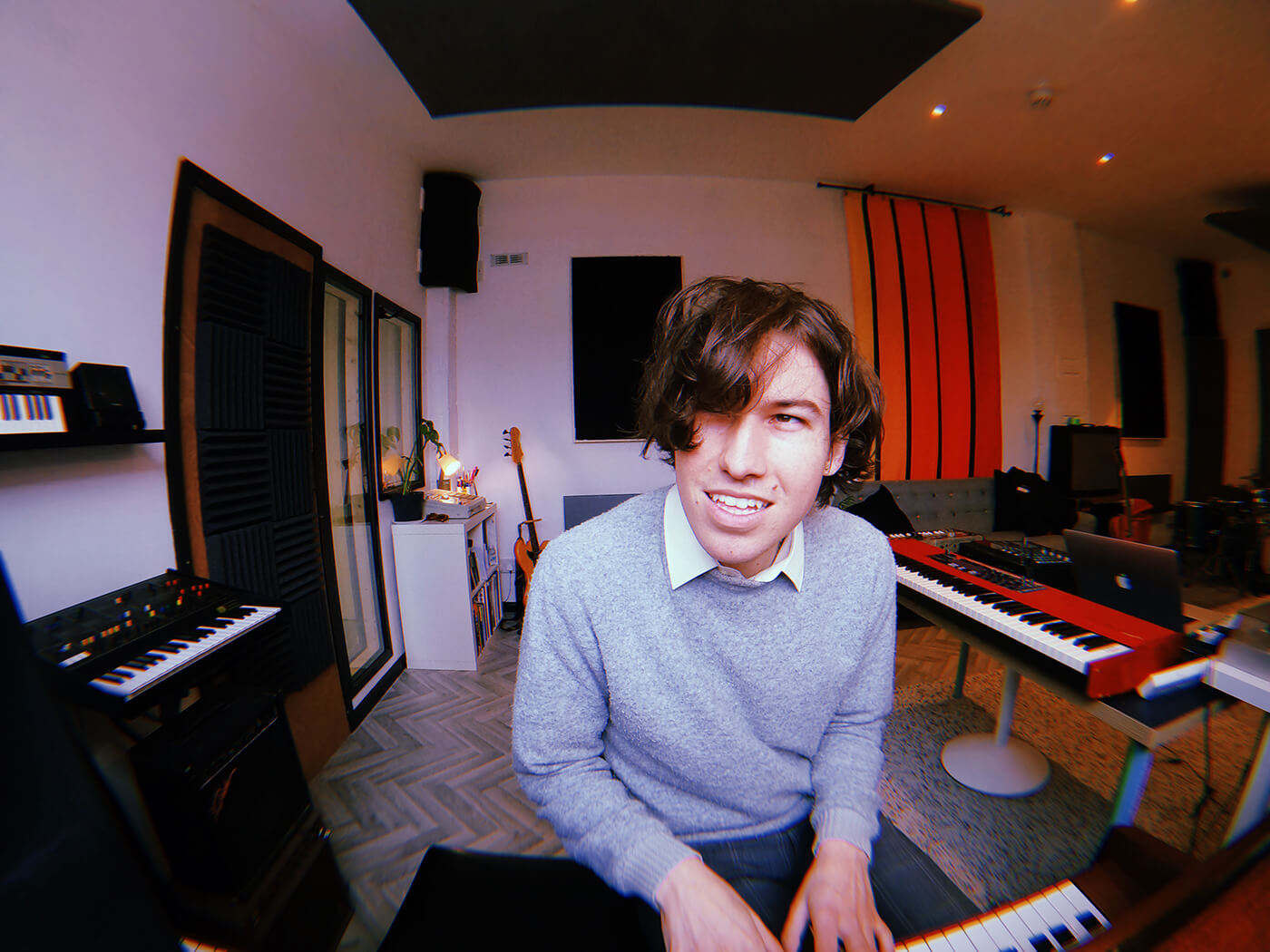 “We built a new studio in the Cotswolds recently. After a few landmark events in our personal lives, we decided to move out of Bristol and try a more scenic environment.

“The space was a completely empty unit and we built the studio ourselves. Our dad is one of those people who can turn his hand to anything and helped us with a lot of the construction. It took about two months and it nearly broke us mentally and physically [laughs].

“We were lucky enough to learn most of what we know from James Dring, who produced our first album and became our mentor, really. His studio is such a great place to work for us because it’s so relaxed. We’ve always been more comfortable in that kind of environment than in a fancy studio. I guess it’s just what we’re used to.” 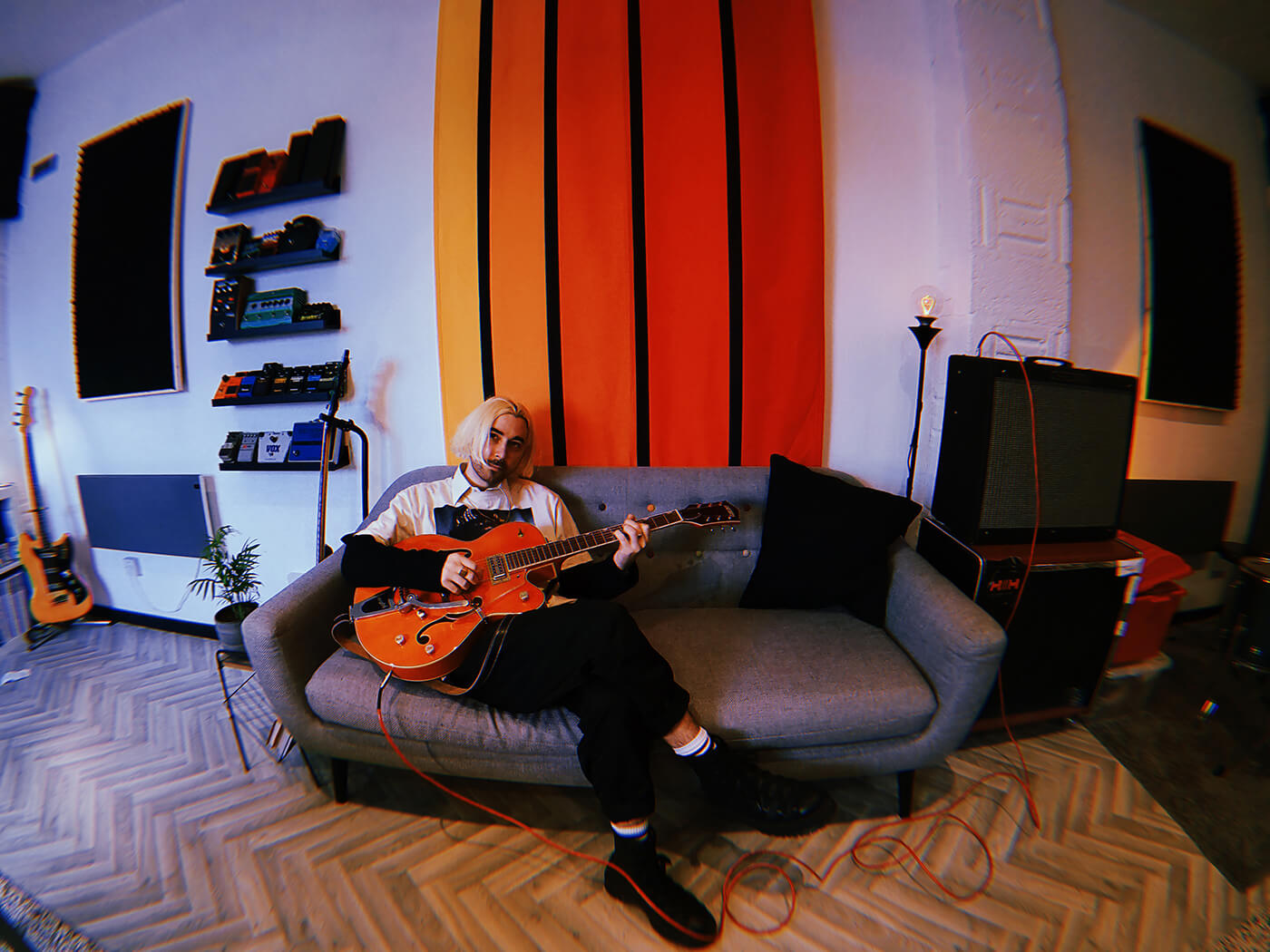 What’s the attraction of a rural studio space?

“A window. We have spent so much time in tiny rooms with no windows and we were sick of them. We don’t do late-night sessions so after a few years of immense vitamin D deficiencies, we decided to find a place where we could get more natural sunlight. That was out of our budget in the city. So we moved out to the Cotswolds hoping we weren’t throwing our careers away, but we’ve got so much more space by moving out here, plus it’s such a picturesque part of the country – we ended up gaining a lot more than we gave up.

“Additionally, there’s a direct line to London Paddington just down the road, so it’s actually quicker for people to travel here from London than it was for them to come to Bristol.”

“We use Logic Pro. We had access to it when we were younger and James Dring was also using Logic when we started working with him. It’s ideal for being creative and trying things out quickly. Every DAW has things it does well and things that it doesn’t do so well, but as long as you know how to use what you’re using then you can achieve whatever you need to.” 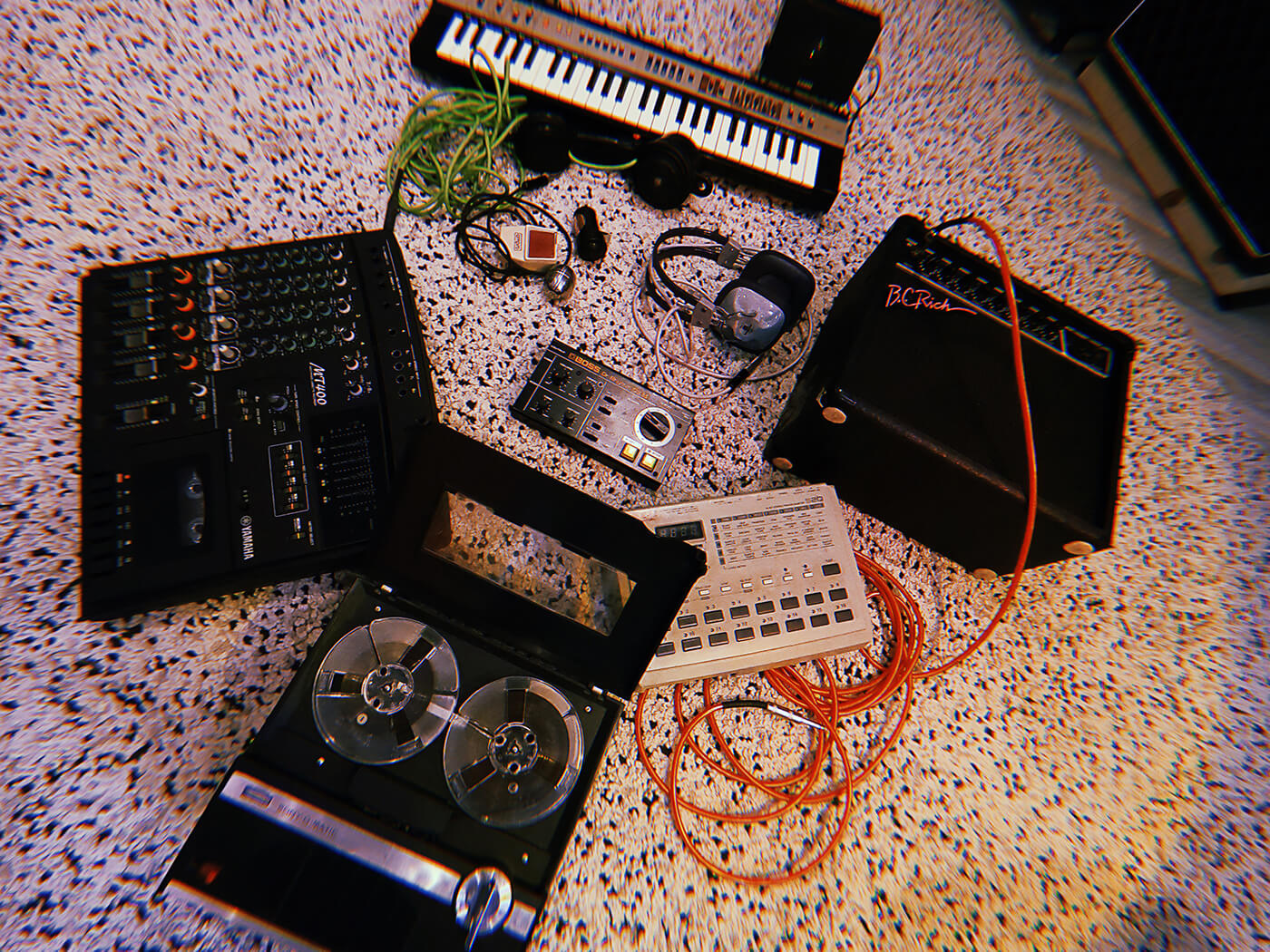 When we were growing up as teenagers, we’d spend alternating weekends with our dad. Our dad plays the guitar and at this point, we were starting to play semi-seriously, too. One weekend, we arrived and he pulled out this four-track cassette recorder that he’d bought – a Yamaha MT400. From that point on almost every time we stayed with our dad we would try writing songs and recording them on that little cassette recorder.

We’d record a little Zoom multi-effects drum pattern on track 1, and away we went. It seems pretty basic now, but it was fun and a cool thing to do with our dad. Years later, our dad asked Ewan to convert a lot of those old tapes to .wav files. After he’d done it, Ewan still had the recorder and he decided to try recording a few things through it. We both absolutely fell in love with it. Maybe it was the nostalgia, but there was something about the EQ, and how scuzzy it gets when you overload it.

So we’ve used it ever since for all sorts of things from ABC-type fuzz guitars, to drum breaks, to notchy vocal sounds. We don’t use the cassette part as much as the channel strip but we do occasionally. Perhaps it’s a pretty simple circuit, but if somebody wants to turn that channel strip into a guitar pedal, we would definitely buy 100 of them – pretty please, JHS? 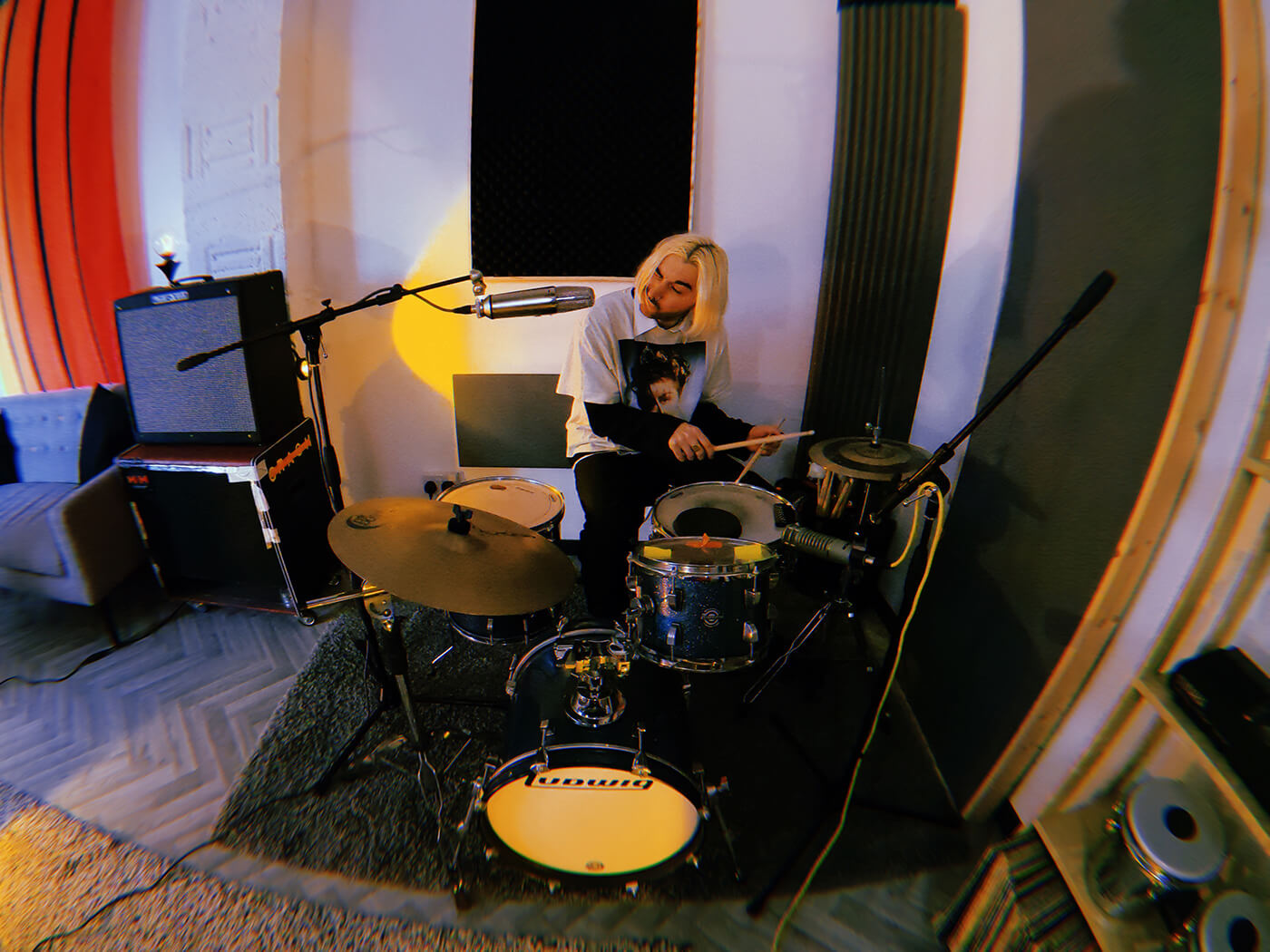 What synth or effect can be heard the most on A Violent Time, Vol. 2?

We’re suckers for spring reverb. All our releases are covered in it. The bass in Move Into Me or the stabs on Gravity Love, for example. We have a few bits of gear that have great springs in them: this absolutely heinous looking B.C. Rich practice amp that sounds ridiculous, and the Echopet, too.

There’s a plug-in called Springs by Audiothing that is one of the most underrated plug-ins ever. Most of the reverbs in our recordings come from that and it’s super cheap.

The Yamaha CS5 is the first synth Ewan ever bought, and it’s all over You Move Backwards, but I don’t remember how much it was used on the rest of the EP. As is common with most of our gear, it sounds a little dusty and not at all fancy, it just sounds super cool. We run a lot of other instruments through it too when we’re stuck for ideas. 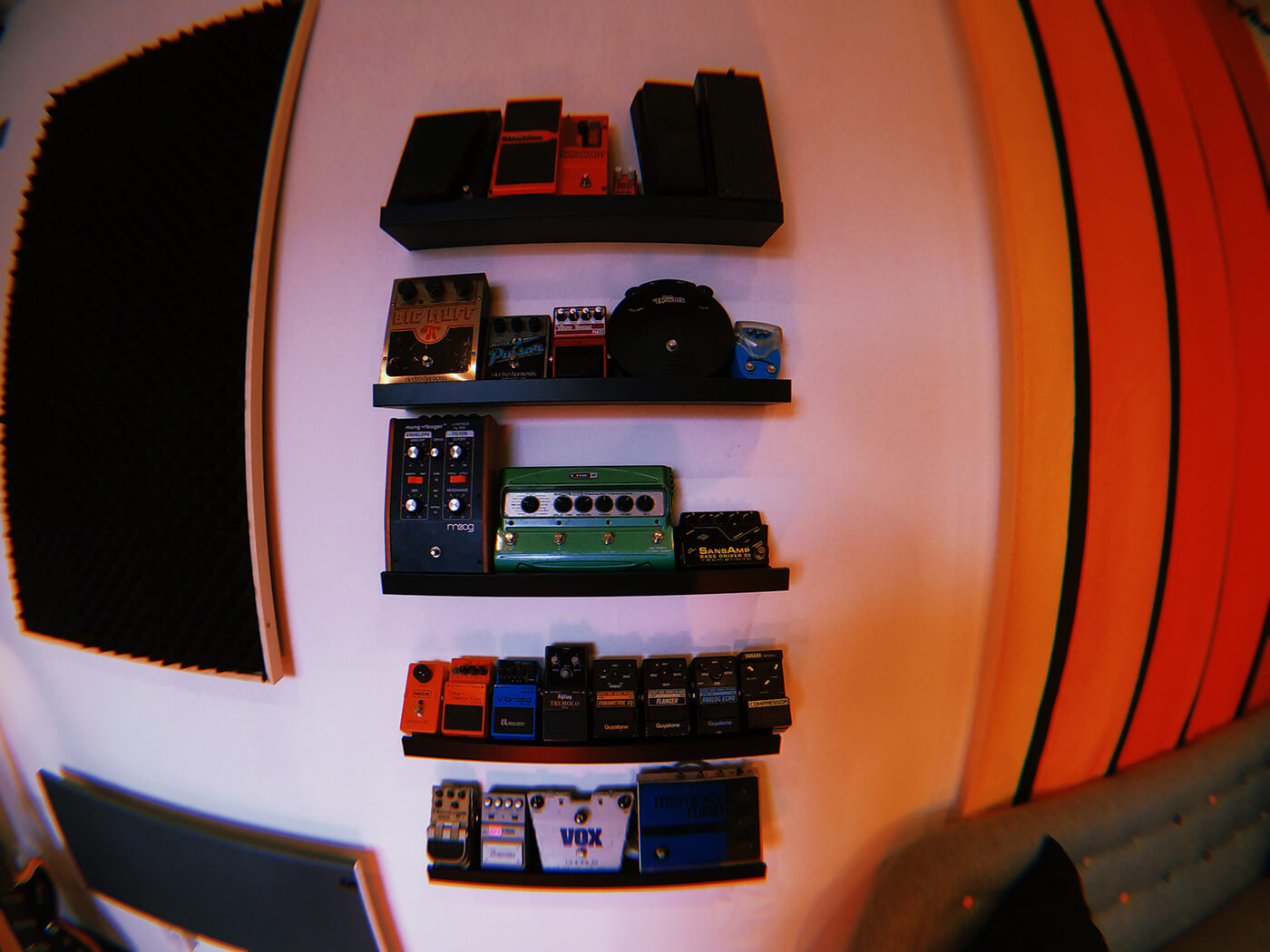 You’ve cited a range of influences as important to you, from Smashing Pumpkins to Madonna, Flaming Lips to J Dilla. Are there any particular production traits you admire in those artists?

“I’d say the correlation between those artists is that they all sound completely individual and unique, and yet their sound became part of the commercial mainstream. We have never chased a sound or a song because it’s the current thing people are into. Our goal has always been to be a part of something that is successful because of, or in spite of, how unique it is.

“In terms of specific elements, I would say that the influence of William Orbit and Madonna’s Ray Of Light album is clear on tracks like No Luck from our debut album. A lot of our early releases had quite dense productions and arrangements, but we’re quite into trying to retain that character with simple spacious arrangements now, lots of subtle atmospheric stuff.” 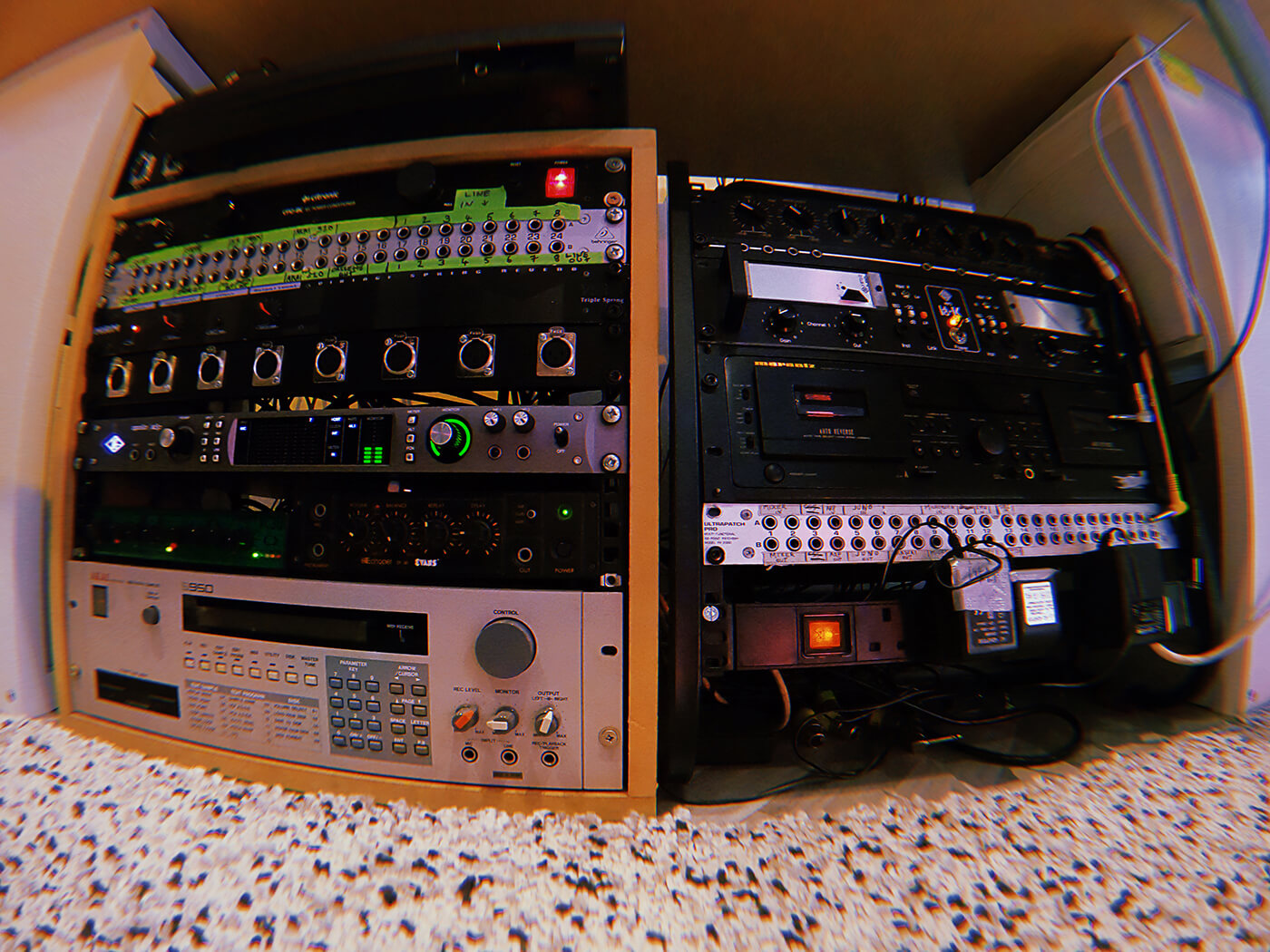 Possibly the Yamaha MT400 because there’s a lot to be said for a simple four-track and a straightforward organic sound. I’ve gotta be allowed at least one instrument though, right? I can make drums out of coconuts or something so I’d love to have the WEM bass with me. It’s my favourite sounding bass; legend has it that it’s the same model used on Feel Good Inc by Gorillaz. I feel like Kevin Parker has a similar relationship with his Hofner bass – I heard that when the wildfires hit Malibu in 2019, that was the one piece of gear he made a point of saving. 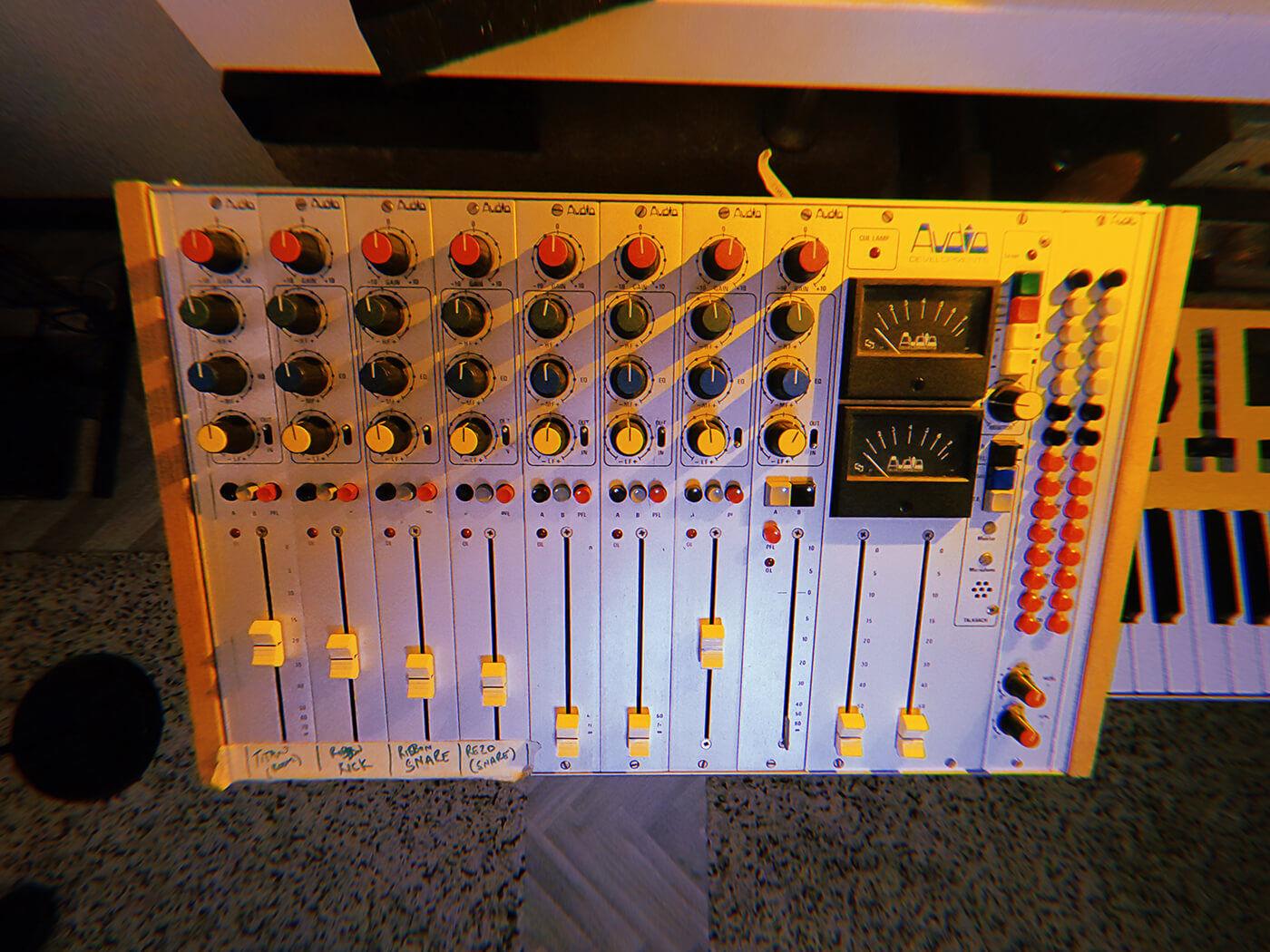 Can you tell us a little about what it’s like being siblings in the studio together?

“We haven’t known much else, so it feels pretty normal to us. We can be very open with each other without fear of damaging our relationship, which can be as helpful just as often as it can be frustrating.

“We get to share a lot of gear, so our collection of crap grows twice as fast. We’ve always been really close and there’s a lot of mutual respect for each other’s opinions. We definitely inspire and push each other which is incredibly valuable. We know what each other’s strengths and weaknesses are, so we don’t need to discuss who will play a particular part, debate a signal chain, how to phrase things –it’s pretty instinctive. We’ve had some people really get a kick out of that when we’re working with other artists like it’s a party trick or something. We’ve also had people work with us who don’t realise we’re brothers until quite late in the day.” 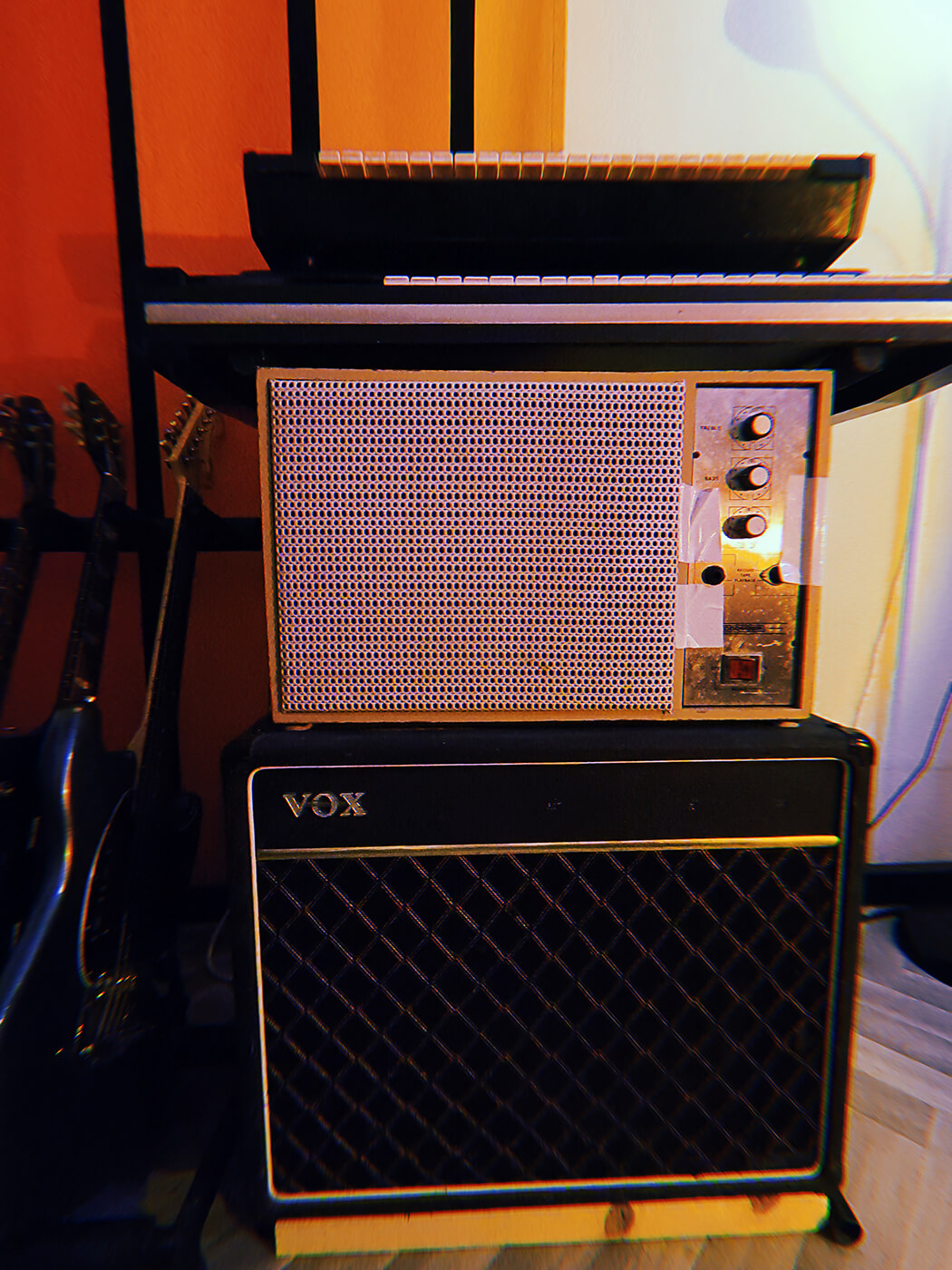 “Try it out. Shooting down ideas before you’ve heard them is a sure-fire way to limit the creative direction of a song, and can sour the mood in a session if one person feels like their ideas are being regularly rejected. That can make things hard for some personality types, for example, if you need to know what you’re shooting for and then somebody throws a spanner in the works by adding something that doesn’t fit. It can leave you feeling a little disoriented. But better to be in that situation, than to make consistently predictable music.” 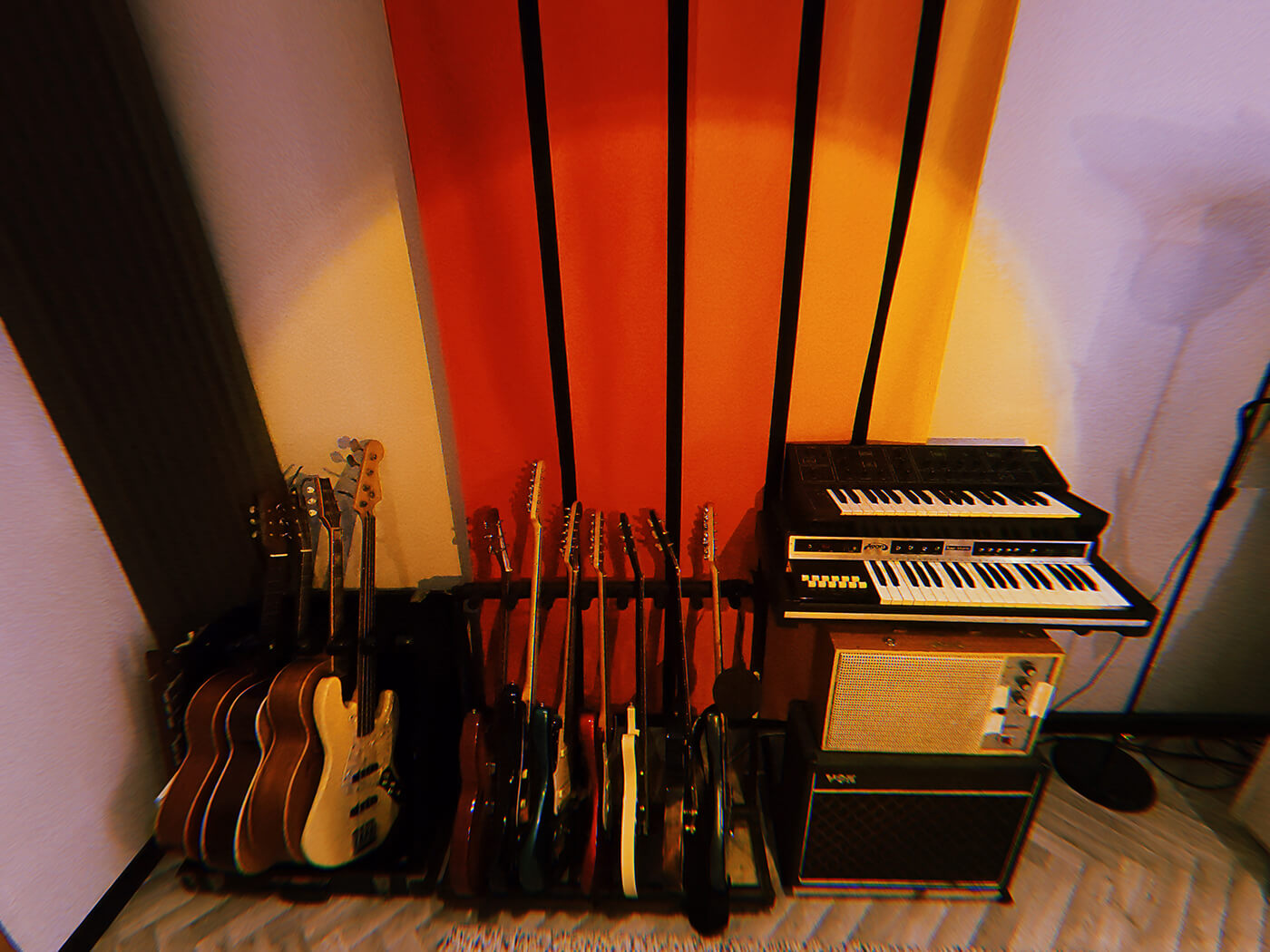 Get someone else to do it.