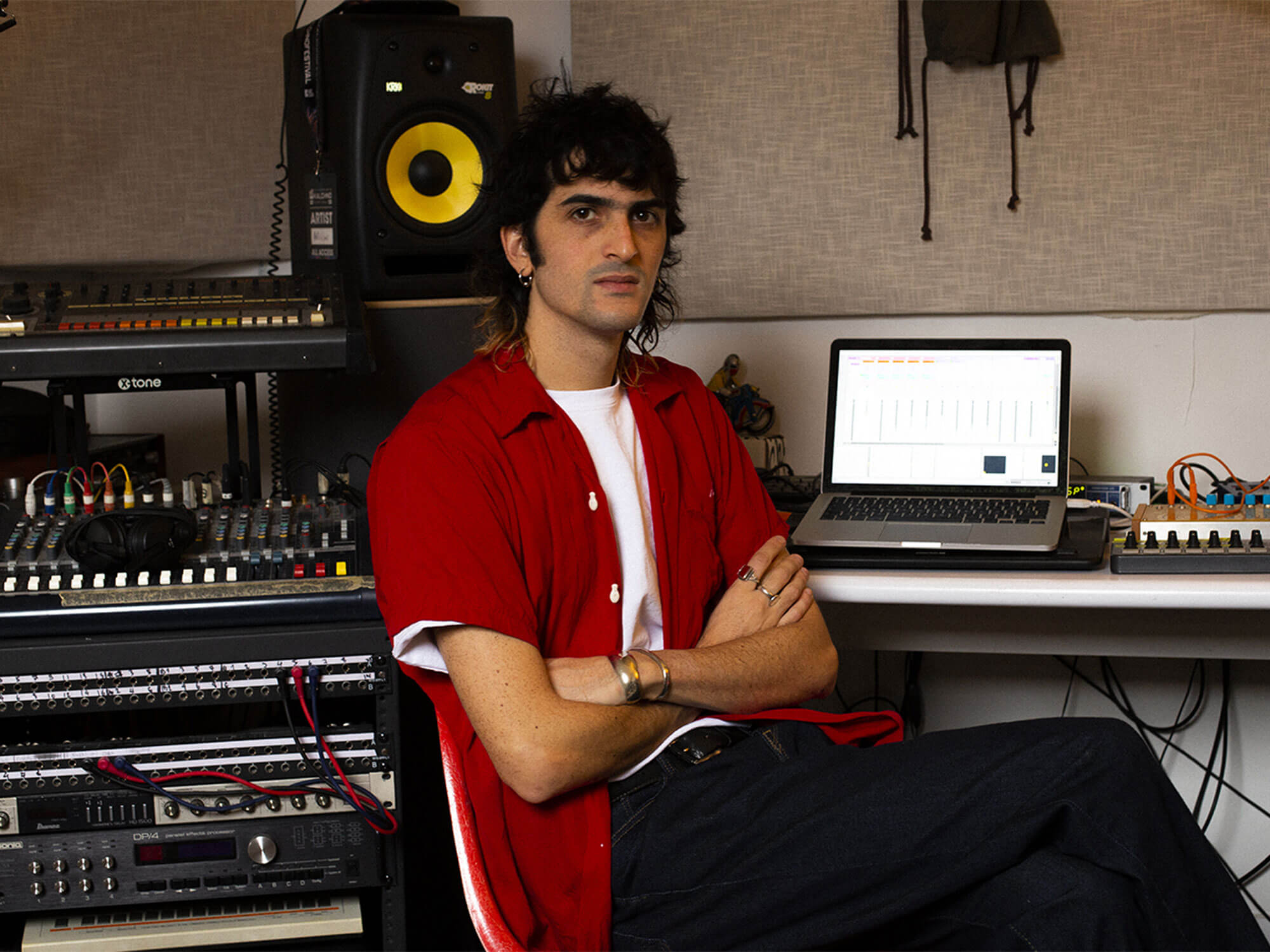 Show Off Your Studio: Antigone belts out stomping techno in his Paris home studio

In the run-up to the release of We Are The Soldiers Antigone shows us around his Paris studio and shares some of his favourite production techniques.

Techno producer Antigone has been at the forefront of the scene as of late, with his high-energy DJ sets and heavy-hitting productions sending shockwaves through France. He was a resident at Paris’ Concrete nightclub for five years, bringing a diverse and intense performance to underground music lovers. Meanwhile, his releases and remixes on labels such as Construct Re-Form and Soma Records have displayed his melodic, considered production skills and bolstered his reputation among his peers. Last year, he set up his own label, No Pain No Game, and is ready to unleash his music in his own style.

In the run-up to the release of his new EP We Are The Soldiers on 10 December, we head to his studio in Paris to learn the benefits of having your own label, how he layers his huge kicks, why he’s in love with the Korg Mono/Poly, and why he regrets the purchase of a Roland TR-808.

Hi Antigone! How does it feel to be able to play your new music out at clubs after the last year or so?

It’s liberating and heartwarming. The funny thing is, I used to be shy about playing my music in front of crowds but since the lockdown, I became more confident with it. After almost one year of lockdown, I finally had the time to sit down in the studio and focus on my sound and how I wanted to shape it. Although a lot of my colleagues found it hard to produce music at the beginning of the pandemic, I felt a kind of relief so everything was flawless. I even had time to finally work on another pop side-project and gain more knowledge about music production.

You’ve released your last two records on your own label. What freedom has that given you and what challenges have you faced thus far?

I started my new label No Pain No Game last June to release music whenever I wanted to, giving me total freedom when it comes to creation. It’s mainly all digital releases but I’ll also still put out some on vinyl but limit the vinyl pressing numbers to alleviate the pressure of vinyl deliveries. I plan to have something out every 8-10 weeks.

I don’t want vinyl deadlines to be something that can slow down and limit the process of organic creation. Nowadays, music is so fast with trends and genres, so you need to adapt with it. 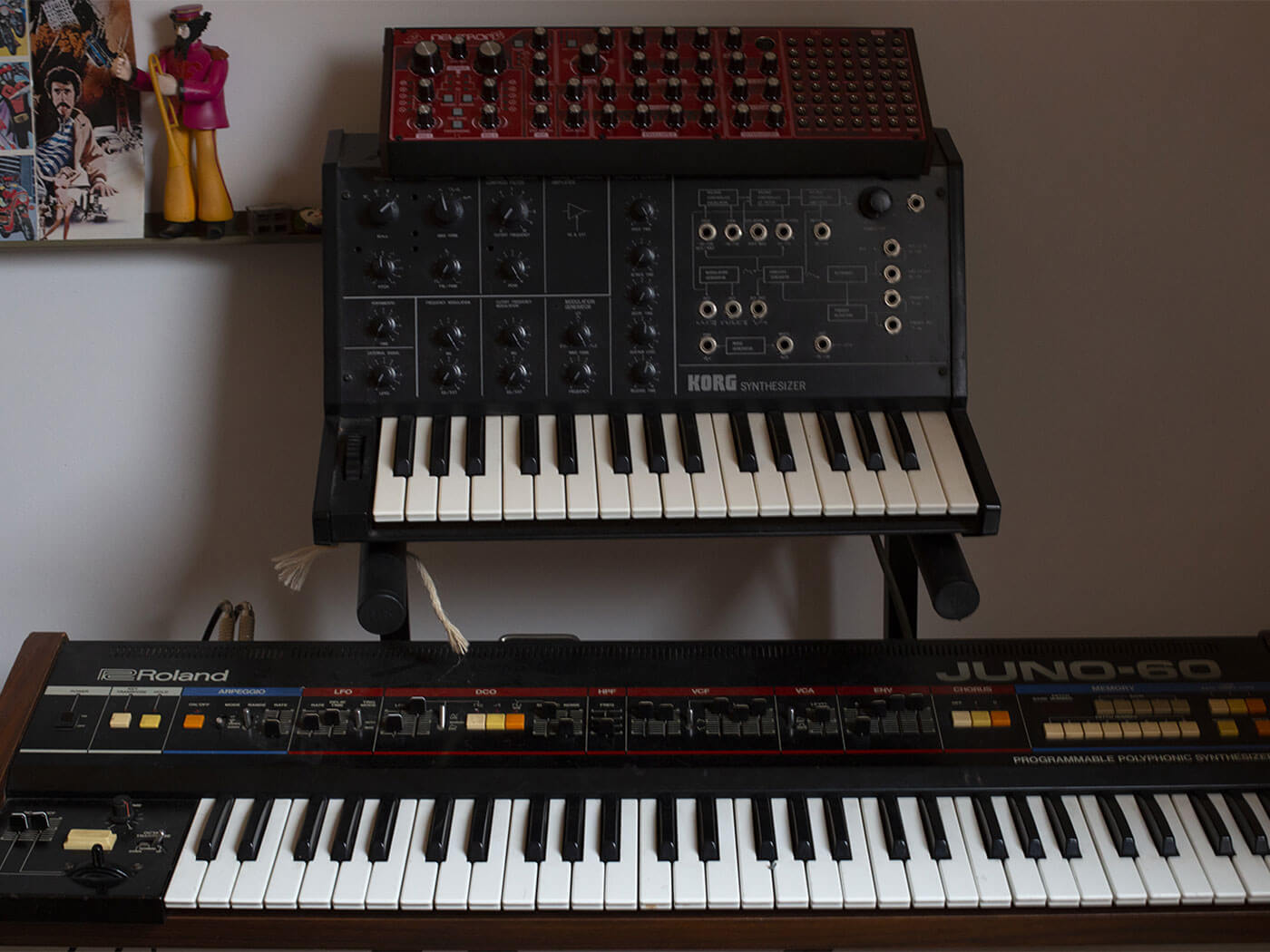 It’s a home studio based in Paris. I have a room dedicated to it but I moved into a new apartment. Before that, I had another home studio. A few years ago, I had a professional studio situated a little outside of the city but I realised that I hated working in a professional environment.

I love making music whenever I want and I don’t like wasting time. Using my routine as an example, I wake up get a coffee and then I go straight into the studio, where I probably stay all day for eight hours, often still in my pyjamas.

I don’t have a typical routine when I produce. I like to see the studio as an experimentation laboratory. I can wake up and work on one synthesizer, creating my own presets, and I can record melodies and sound textures that will end up in a soundbank.

I always finish my projects in the studio, never on the road. Even when I am editing, I always like adding small details and for that, I need my gear close to me.

The studio needs to be a place that reflects your personality. Mines a bit like a teenager’s bedroom with a childish vibe [laughs]. I need music to feel like a hobby and not a job. I have actually decorated my space and made it amazing – I feel that the surroundings are often more important than buying gear. I need my mind to be stimulated, so the very best environment is key. 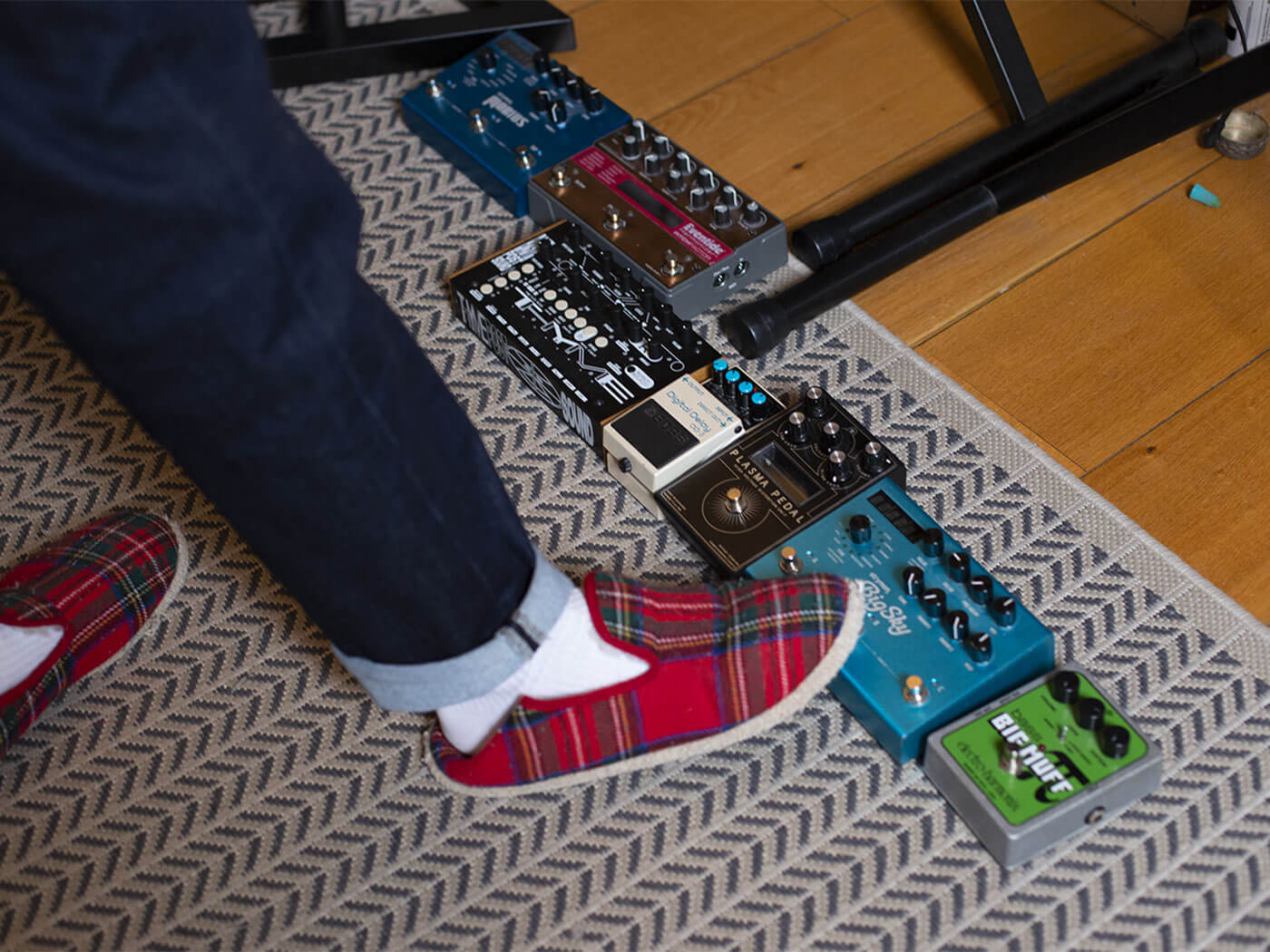 I have been using Ableton Live for almost 14 years now. Although I have tried Cubase, Reason and Logic, none of them gave me the freedom to twist the audio as I wanted. When I work on it feels like I am drawing, and I can literally do anything I want, even things that are not recommended.

The Korg Mono/Poly. I can spend hours just playing around with it and designing sounds. I love the fact that you can’t save anything on it so I have to take a small notebook and write down my presets.

My favourite part is the polyphonic mode with the arpeggiator on. Each oscillator plays by itself and becomes like a step sequencer; it’s just perfect for complex melodies. And if I add some pedal effects to it, the synth sounds even more alive. 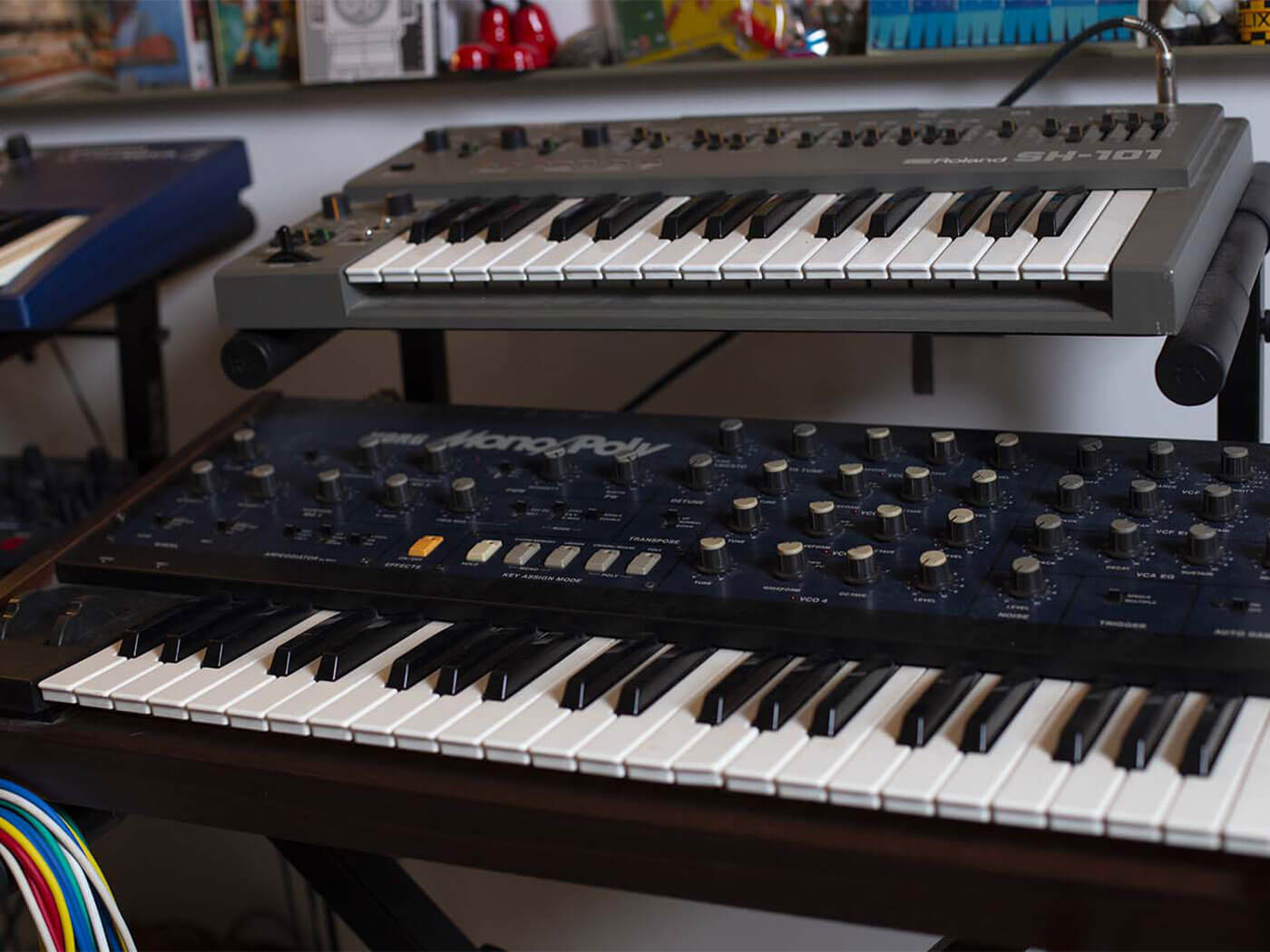 What synth or effect can be heard the most on the new record?

Lately, in all my new music the synth that appears the most is ANA 2 by Sonic Academy. This VST is mainly EDM and trance-focused but the sound is stunning, very shinny and aggressive.
The matrix is also easy to handle and is quite intuitive. Also, I love the idea of mixing samples and oscillators. For my effects, there’s a lot of Soundtoys plug-ins, especially its amazing Phaser.

How do you create your heavy, thumping kicks? What gear and software do you use?

I don’t have a typical technique for kicks. I usually take a day and only create kicks by layering first in four parts: high kick, mid kick, body kick, and low rumble. Then I use Slate Digital’s Infinity EQ and some different distortions (a lot of it) and experiment with different types of compression and sidechain. I try to have no rules so sometimes it can get quite chaotic but I love being surprised by mistakes. That’s usually when the magic happens. 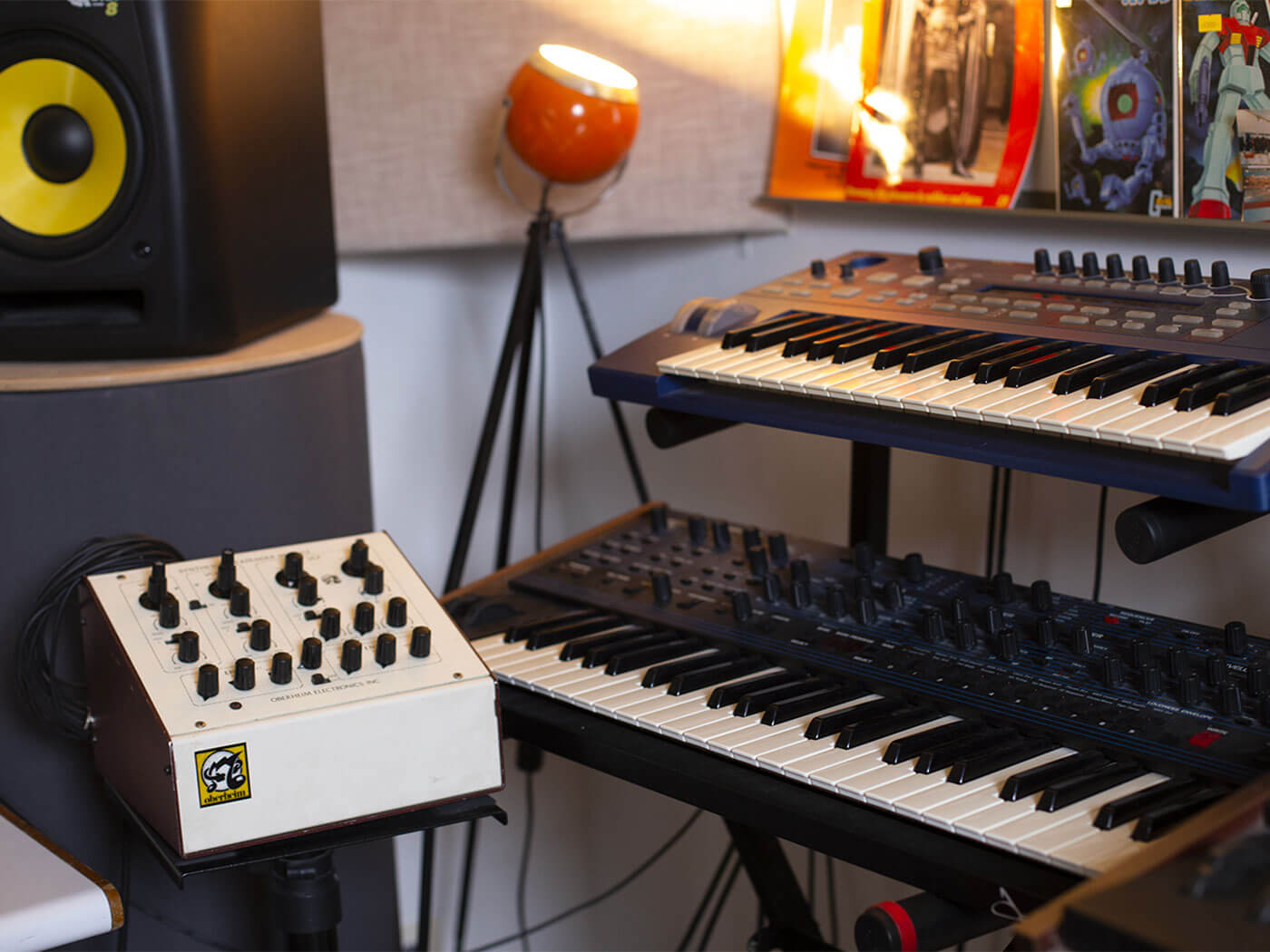 Do you have a favourite piece of sound design on the record? How did you create it?

The kick of the title track We are the Soldiers is definitely the one element that I like the most. The track is only about the kick. I created an effects rack that contains OTT, Ableton’s Saturator (in wave Shaper mode), Limiter, OTT again, and then some EQ in that order. I wanted to destroy the sound and then shape it and control it.

My Roland TR-808 – it was totally not worth it. Let’s just say it was just to make a statement, because in the end I’ve barely used it, and to be honest I’m more of a TR-909 fan. I also must say that the Elektron Analog Rytm MKII is just a beast!

Probably some new speakers. I have been working on my awful KRK Rokit 8s since I was 16 years old, so almost 15 years. But I got used to them with time. I am still deciding on a pair of PMC or Barefoot monitors. 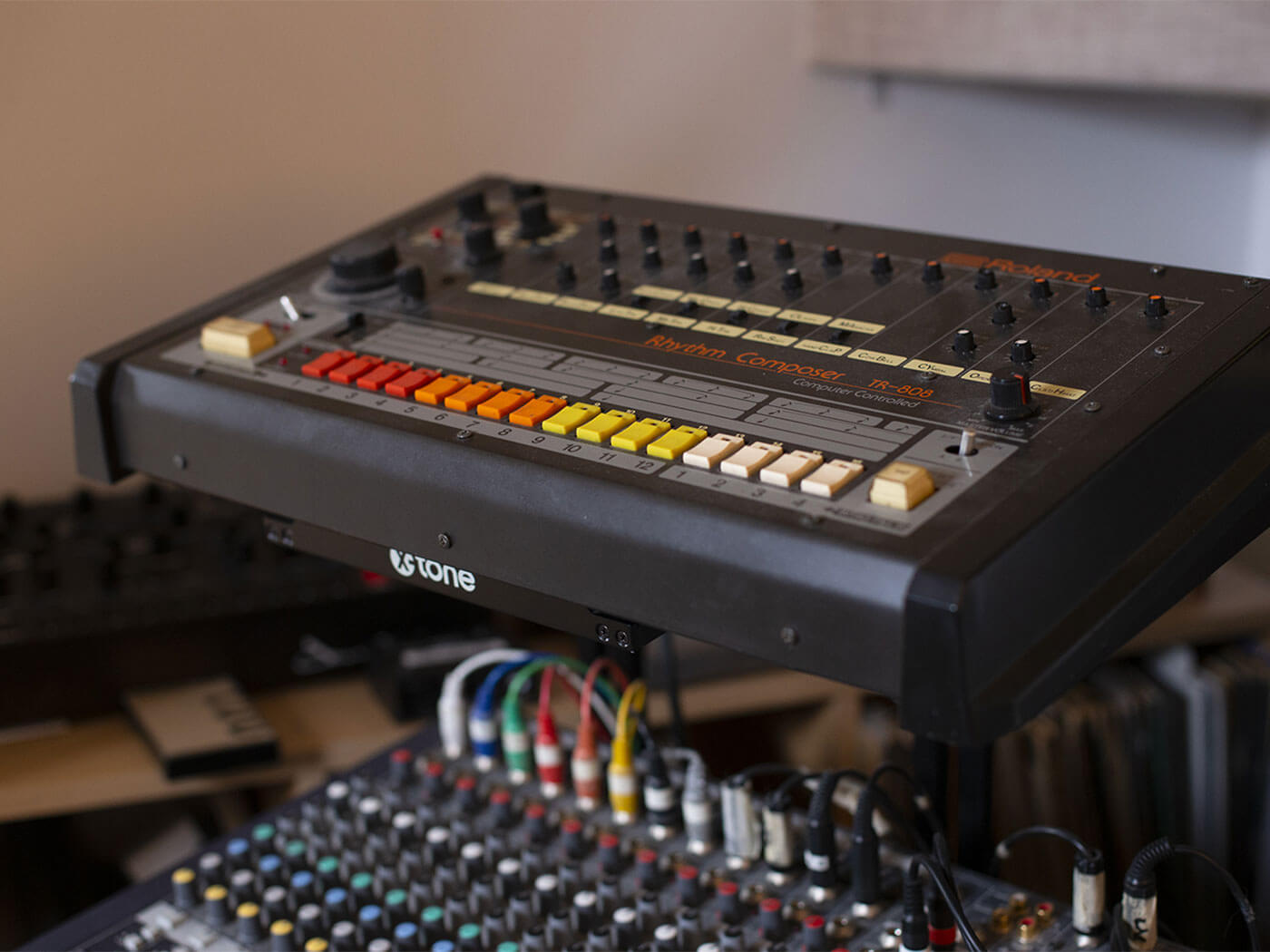 An Oberheim 8 Voice. It’s just one of the best polyphonic synths ever made, The richness of the sound is mind-blowing. The first synth that I ever bought was an old Semi from the 70s and I have been trying to find old SEMs over the years to build an 8 Voice but, unfortunately, I have never succeeded.

Start small. Nowadays, everything can be made with a computer and that’s the beauty of it.