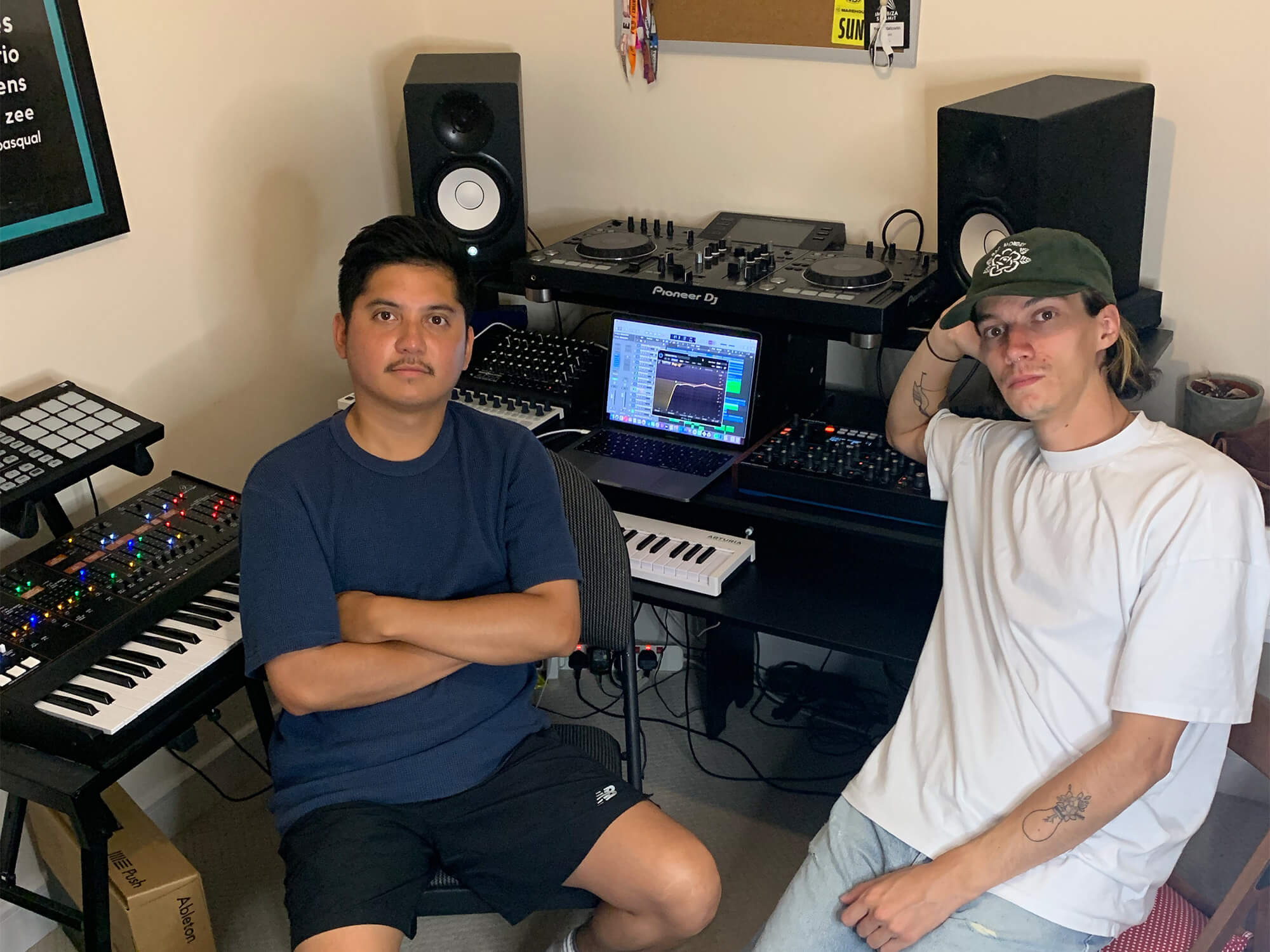 Plug-ins I Actually Use: TIBASKO

Huge, emotive dance music laden with classic synth sounds and distinctive vocals to reflect a duo on an upward trajectory.

TIBASKO is the producer duo melding hardware synthesizers with cutting-edge plug-ins to create stirring dance music. Big pads, dramatic vocal samples and leftfield drum elements – it’s all there to raise the tension levels in the rave. The pair, whose real names are Ken Petalcorin and Andy Bowden, released the Gradients and Traces EP in June 2022, and are two more tracks expertly catered for huge crowds.

Ken and Andy opened up their Logic Pro projects to talk plug-ins and explain how they create percussion through synths. Plus, they tell us how they managed to recruit a full Bulgarian folk choir to feature on their track Traces.

TIBASKO! We’re feeling Traces and Gradients. We can certainly see some hectic dancefloor moments happening to these tracks! How was hardware used alongside plug-ins to create these two tracks?

For Traces, some of the pads we made using the Novation Peak. If anyone has a bit of extra cash floating around, we’d recommend the Peak. It’s an amazing bit of kit that has loads of potential to create all sorts of sounds as it has 24 oscillators to play with. Something we like to do to our pads to give them extra flavour is add the Arturia Chorus JUN-6 plug-in to give it that vintage feel whilst adding movement.

In terms of Gradients, a lot of the industrial-sounding components were made using the Mode Machines ADX-1 drum machine.

The most recent purchase we’ve made that has been a total game changer is oeksound’s Soothe2 plug-in. We’ve seen quite a few people using this, including the Disclosure lads and a few other producer mates. This plug-in does wonders to your mix – it suppresses any uncomfortable mid-high resonances using an in-built algorithm. This is especially important for us as we like to work with a lot of samples. Some samples we grab are really old and feature a lot of unpleasant frequencies which need to be processed. Soothe2 does this for us.

A favourite free plug-in we own is the Alex Hilton A1Triggergate. It’s basically a ‘sequenced gate’ plug-in that will chop up any incoming audio stream. That’s how you can create the ‘Trance Gate’ effect that’s well-known within electronic music – specifically trance music. We love it because it’s simple to use and offers a lot of customisation in how you want the gate to work, from altering the ASDR to adding slides within the sequencer. Aside from being able to create really interesting sounds with it, you can also use it as an LFO tool to create a heavy sidechaining effect that allows your kick to really punch through the mix.

We’ve also used it to create the gated vocal in our track Isolate – essentially we just put a vocal sample through it and added delay.

Without a doubt u-he’s Repro 1 and Repro 5. Whenever we make synths using plug-ins, this is usually our go-to. It’s amazing how well these plug-ins are modelled after the Sequential Circuits Pro-One and Pro-5. You can get some really high-quality sounds out of this and it offers a lot of flexibility in terms of sound design. Another feature we love is the built-in sequencer – it feels intuitive and easy to use. 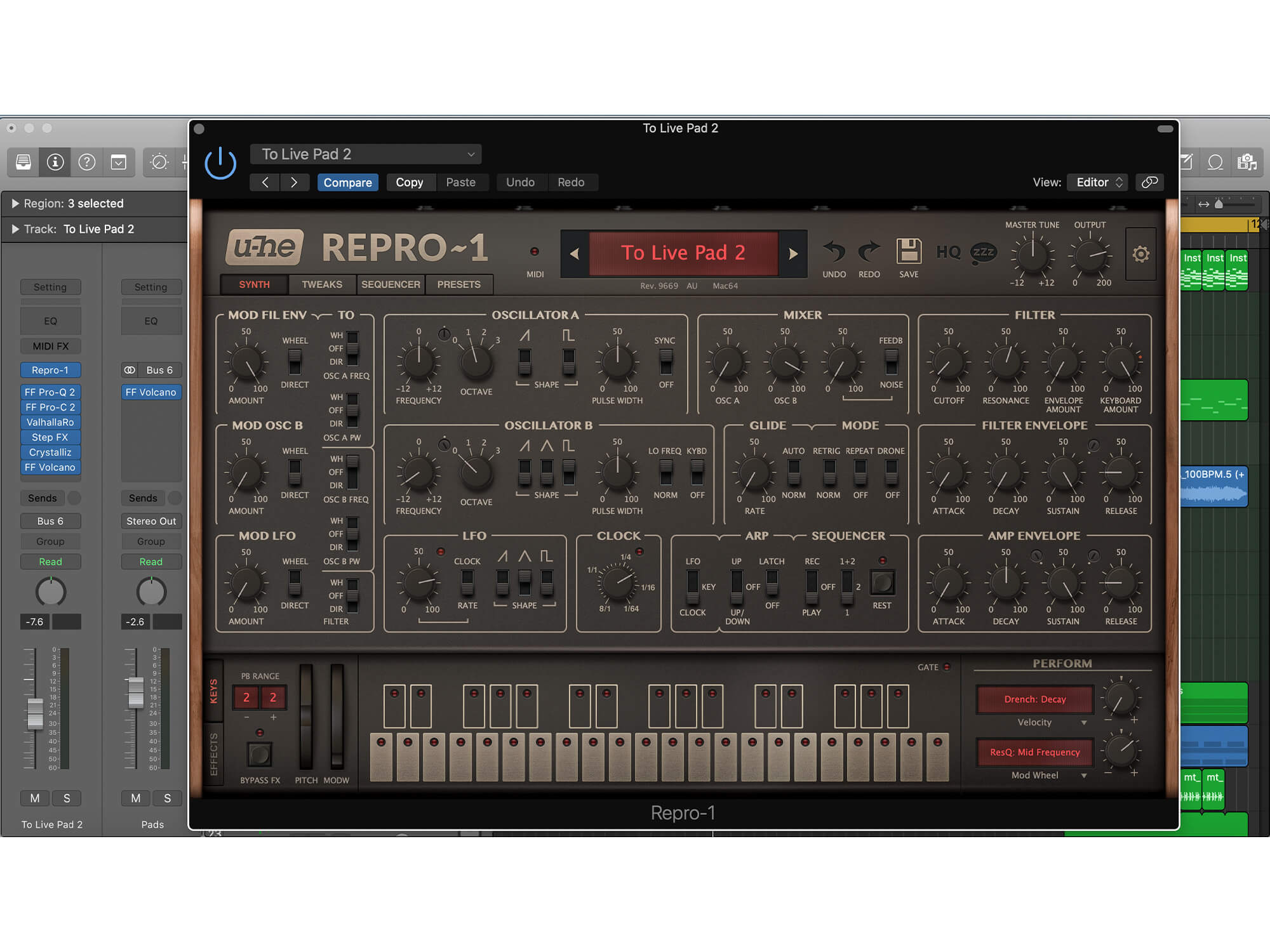 Arturia’s V Collection. We got it during a sale but it was still pretty painful for our bank accounts. However we’d say it’s definitely worth the money, you get loads of different instruments within it – a few standout favourites being the Buchla Easel and Prophet-V which we use in a lot of our tracks. Not just that, you get a load of sound banks to get you started, which is great for learning how to use each individual instrument.

We love to use Apple Logic Pro’s Step FX plug-in to produce new sounds from standard drum loops and synth elements. It can totally transform boring loops to make them sound really unique and different.

We don’t tend to master our own music but when we need to self-master for demo purposes, we tend to use iZotope’s Ozone at the end of the mixdown. Ozone has all the bits you need for a basic master. After the mix, we usually put the wav file through Ozone as a separate app away from the DAW and we usually focus on using the multi-band compressor, maximiser, exciter, limiter and EQ to get the demo to sound almost like a finished product.

What plug-in would these two tracks be incomplete without?

Tell us about the drums in Traces.

Interesting fun fact – the hi-hat you hear throughout Traces was actually made on u-he Repro-1. It’s just white noise that’s been put through a sequencer. The bit where the tonality changes is when we turn the second oscillator up. We also play with the ASDR to give variation in how the hi-hat opens up. 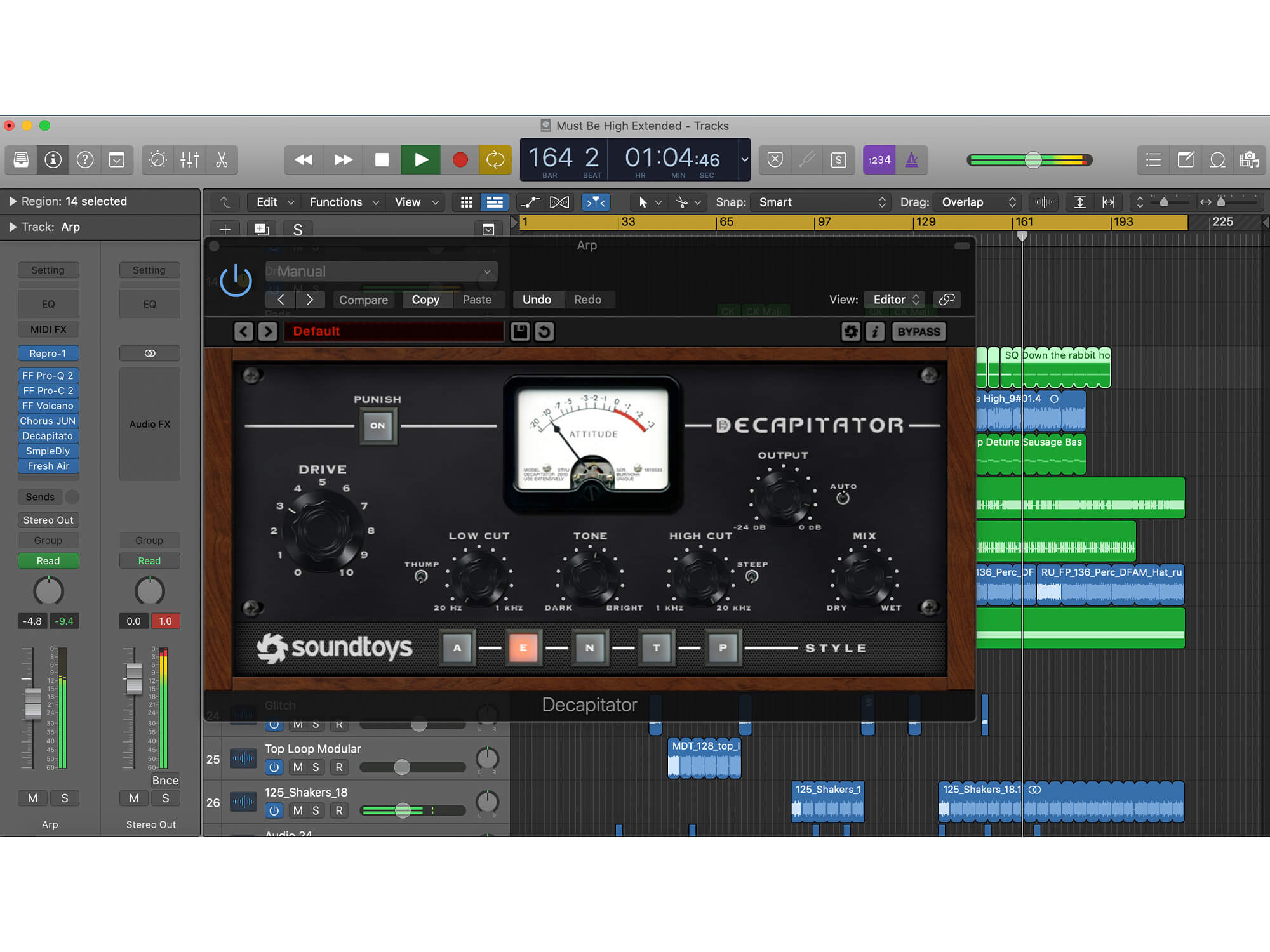 Sampled vocals play a big part in your tracks. How did you find the vocal for Traces and how was it processed?

Usually, we use samples that we’ve got in our big bank of samples that we’ve dug up from various sources such as YouTube, vinyl records and Spotify over the years. However, the vocal for Traces was actually sent to us by a friend who thought we could make a banger out of it (big up Georgie if you’re reading this!).

Samples are always tricky to process because the general mixdown always varies. For example, older samples tend to have loads of artefacts in it which need cleaning up, whereas the more modern 90s/00s samples sound more polished.

The original sample for Traces is Pilentze Pee (A Little Bird Is Singing) by Bulgarian Television, Radio Folklore Ensemble.

Bulgarian Folk Choir music has a lot of complex rhythms called ‘asymmetric metres’ which is understood as a mixture of quick and slow beats. This makes it hard to fit into a dance track because of the amount of variation in it. We had the sample re-sung by another Bulgarian choir but with some subtle changes to arrangements that fit our track better.

With the new sample, we gave it a standard EQ and compression treatment using the Fab Filter Pro-Q2, Pro-C 2 and Soothe 2, a tinge of reverb using Valhalla Room, and also run it through Sonnox’s Oxford Inflator to bring it further up in the mix without turning the volume up. We also add a gentle touch of saturation using Soundtoys Decapitator to add a little bit of grit. 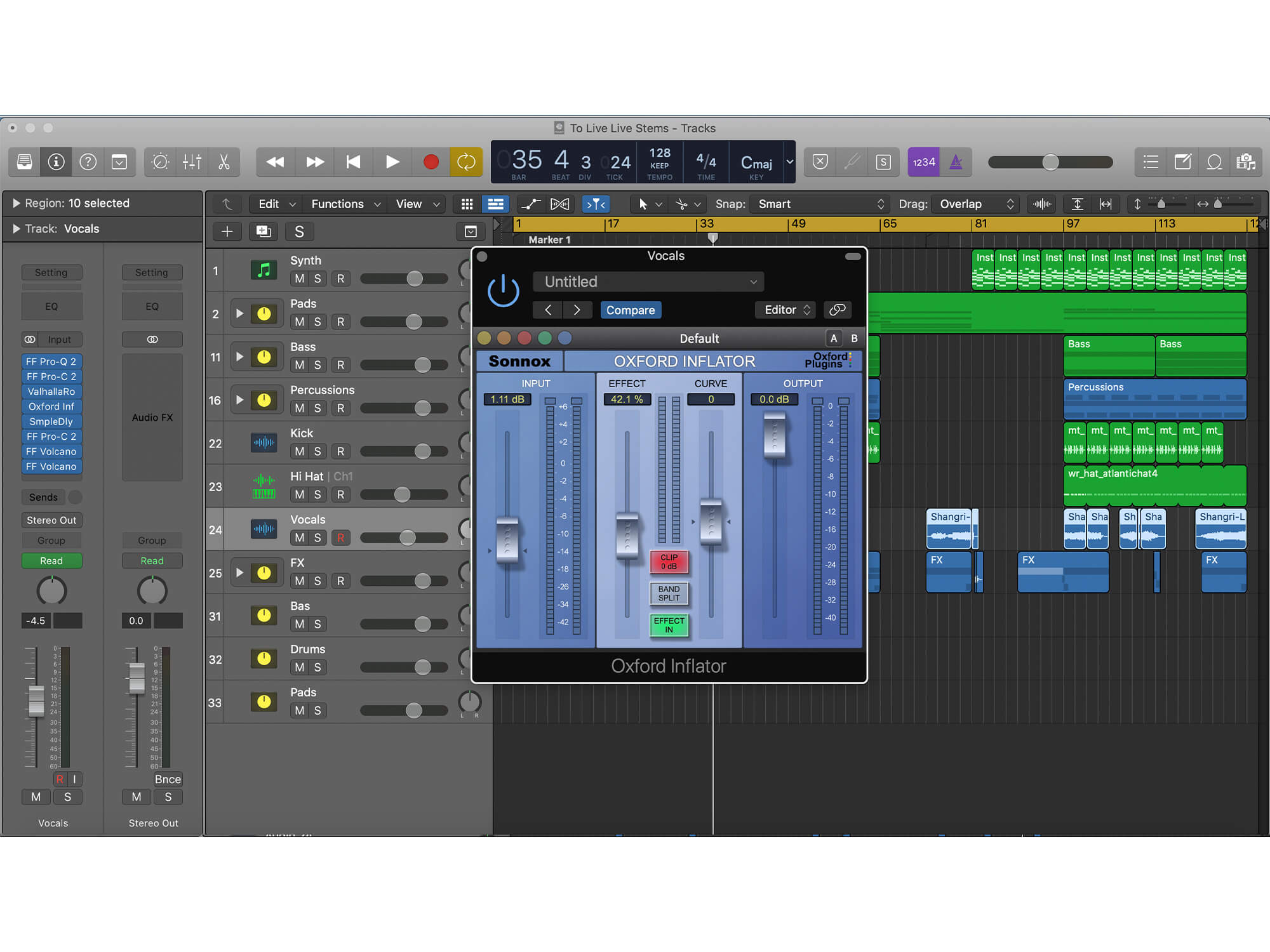 We use Sonnox’s Oxford Inflator on a lot of our channels. It’s a great way of bringing the elements you want further up in the mix without having to increase the volume.

Another honourable mention is Fresh Air by Slate Digital. This plug-in genuinely gives any element in your track the smoothest high-end sparkle and it’s great for adding clarity. It’s only got two knobs but its powerful high-frequency processing power helps to provide life for your mix. 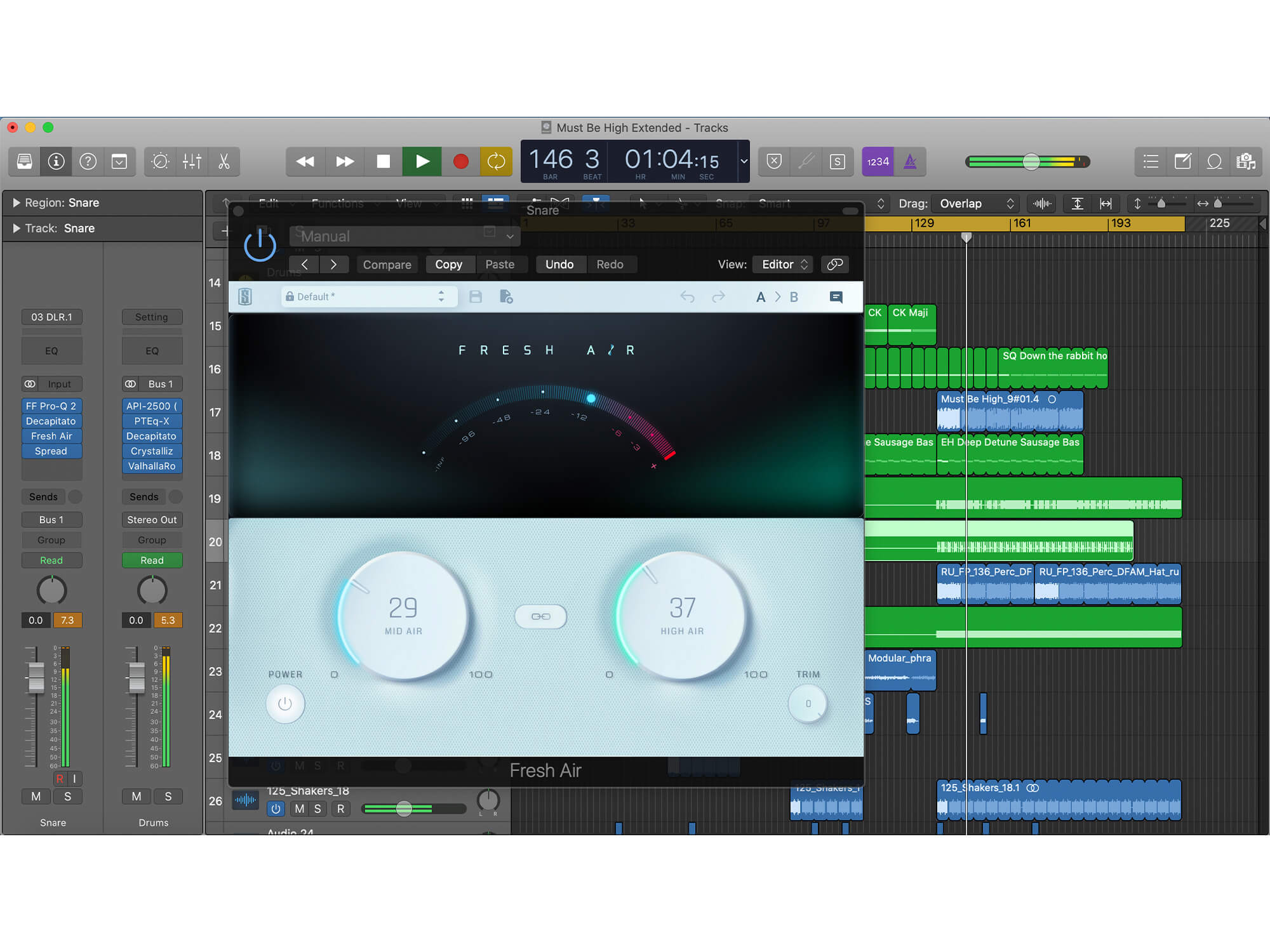 Not sure if this is classified as a guilty pleasure plug-in but Cableguys Shaperbox 2 is an awesome little tool for adding a bit of ear-candy to your tracks. We love it because it’s so versatile. You can use it as an LFO tool and draw modulation shapes or you can even feed your loops into it to make some pretty wild variations.