Show Off Your Studio: Dennis Bøg’s Baum Studio is a hardware heaven 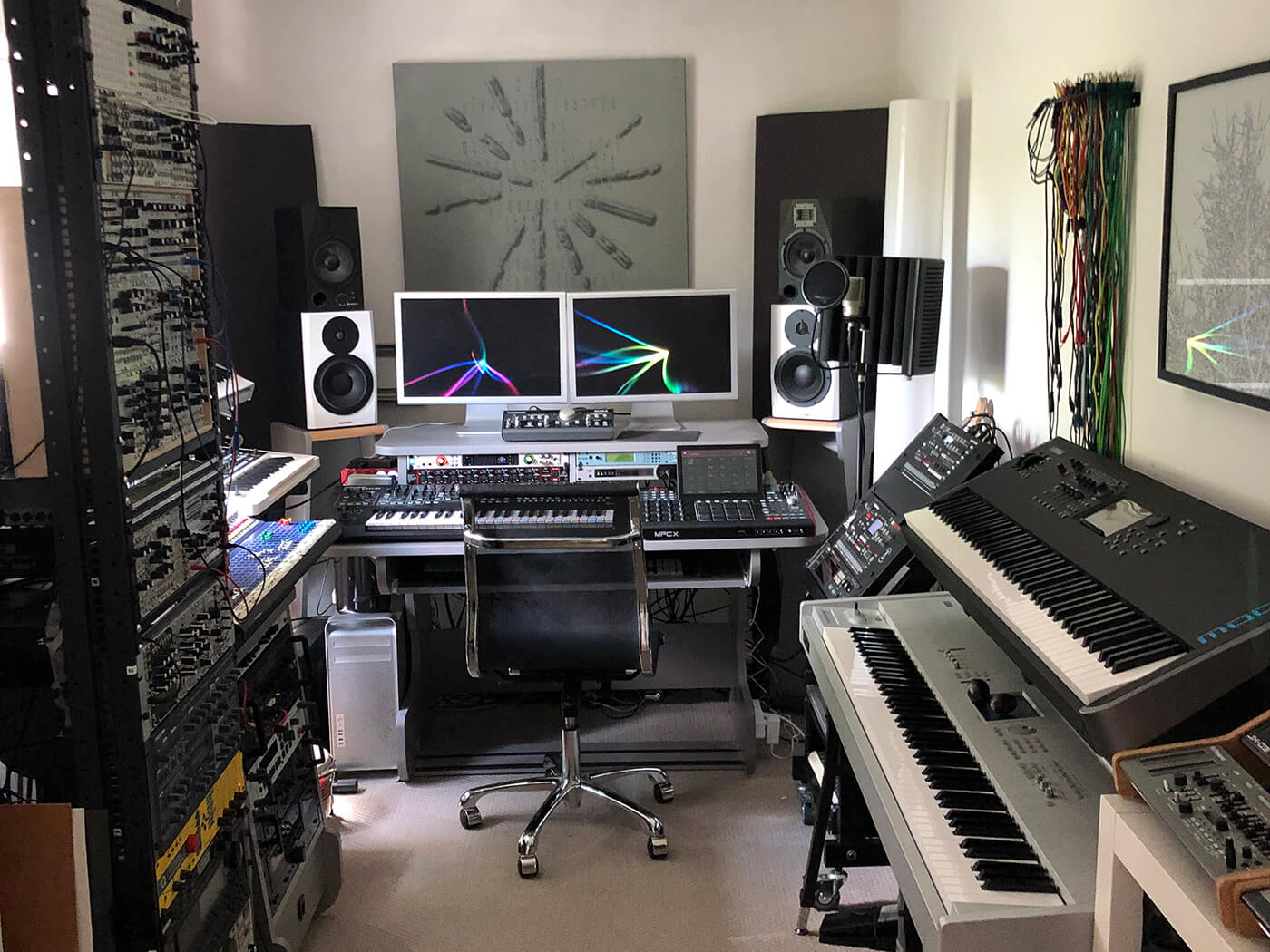 Tell us more about your studio…

Baum Studio is located in Copenhagen, Denmark and it has been in this location for more than five years. The idea behind the studio is that it’s a semi-professional studio that I use for my work as an artist, but also for the projects I do for advertising as Dennis Bøg Sound Design & Music Curation. I’ve also built separate workstations, which can either be controlled by itself from the specific area, but also altogether from my Mac Pro.

Nowadays, I use Ableton Live as my main DAW when producing, because I’m currently part of their artist programme and a beta tester. In the past, Logic was my main DAW. But when Apple bought it from Emagic, I switched to Live because there were so many bugs in the first version Apple released. Besides using Ableton, I’ve also always been an MPC user, and I still use an MPC in most of my productions today. Sometimes I do sequencing and other work on my MPC, not using a DAW at all. 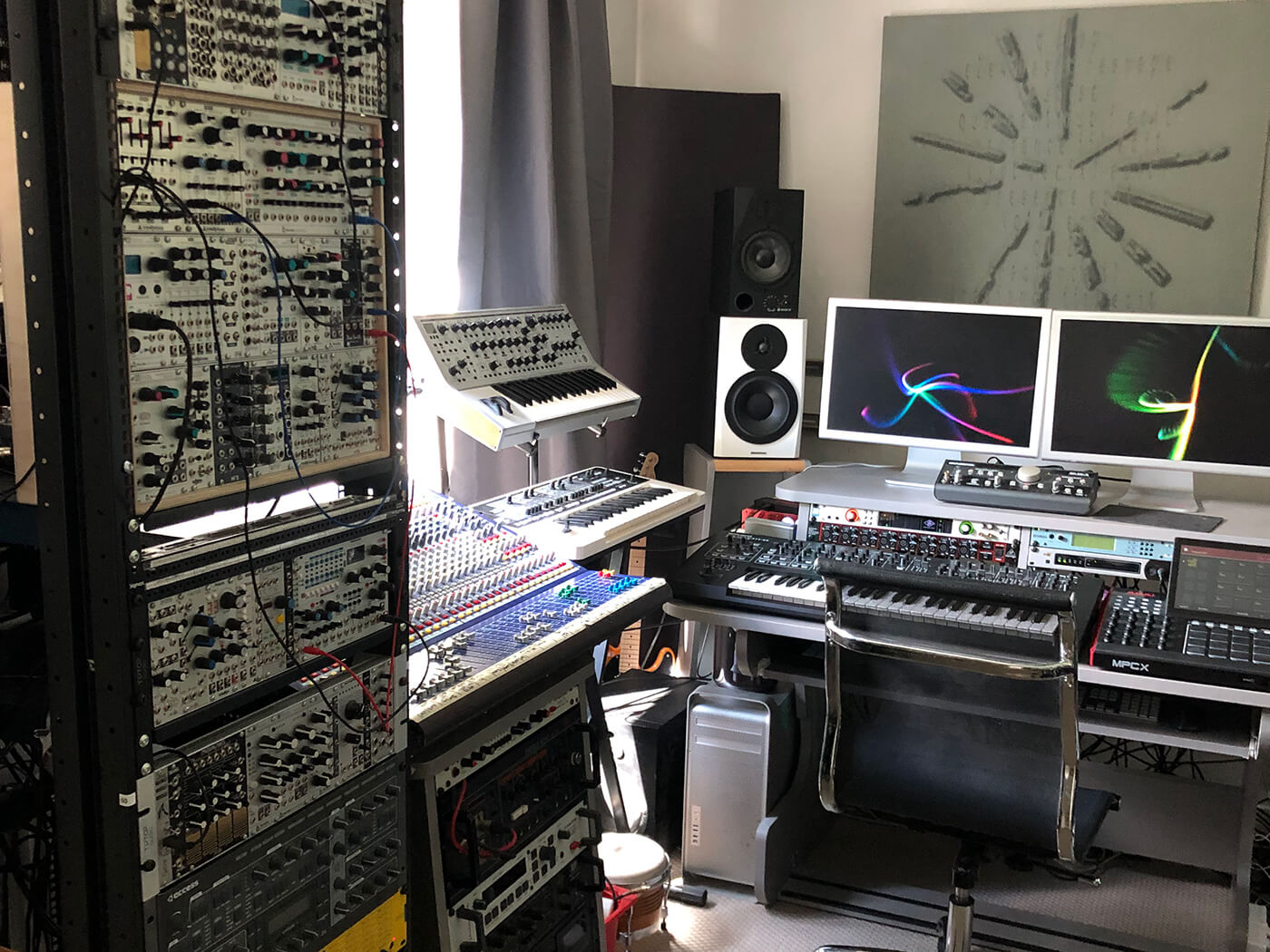 Can all the instruments still be controlled from the computer?

I have built my setup in way that everything can be controlled from my computer, but also can be used individually in the three working groups that I have. The first group, which is catered more to live jamming, consists of an MPC Live, Korg M1 rack, Yamaha TX81Z and various Roland Boutique instruments. Then I have a group which is my modular setup, and lastly, my main group with all my hardware synths and effects.

Talk us through some of your favourite modules – how do you control the rig?

I have to say, I don’t have any particular favourite modules – it changes all the time which modules I use and like to work with. But if I have to look at which modules that always end up in a patch, it would be this incredible module called Maths by Make Noise. There’s also Clouds by Mutable Instruments, which I really love to record live for drone-like soundscapes and weird noises, depending on what I run through it.

Then there’s Braids, also by Mutable Instruments, which I use almost every time I make a patch, because I know it inside out. It’s basically like a Swiss Army knife for waveforms. I have also been using Intellijel Rainmaker recently a lot. It’s such a fantastic module and I especially love to use the random functions to see what it comes up with.

Most of the time, when I make a patch I record everything in Ableton Live, so I send a clock signal from the MIDI interface to Yarns by Mutable Instruments and then send out the clock signal from there to a multiple. For sequencing, I use Tiptop Audio’s Circadian Rhythm and Z8000 Matrix Sequencer and Intellijel’s Metropolis.

How do you organise signal routing with this many instruments?

The way I built my setup, I have a Midas Venice F32 which is my main mixer, but I also have some Mackie mixers that I use as sub mixers. I have all the mixers connected to my UAD Apollo Quad interface and then I use the console to route the different signals to where I would like to use them. 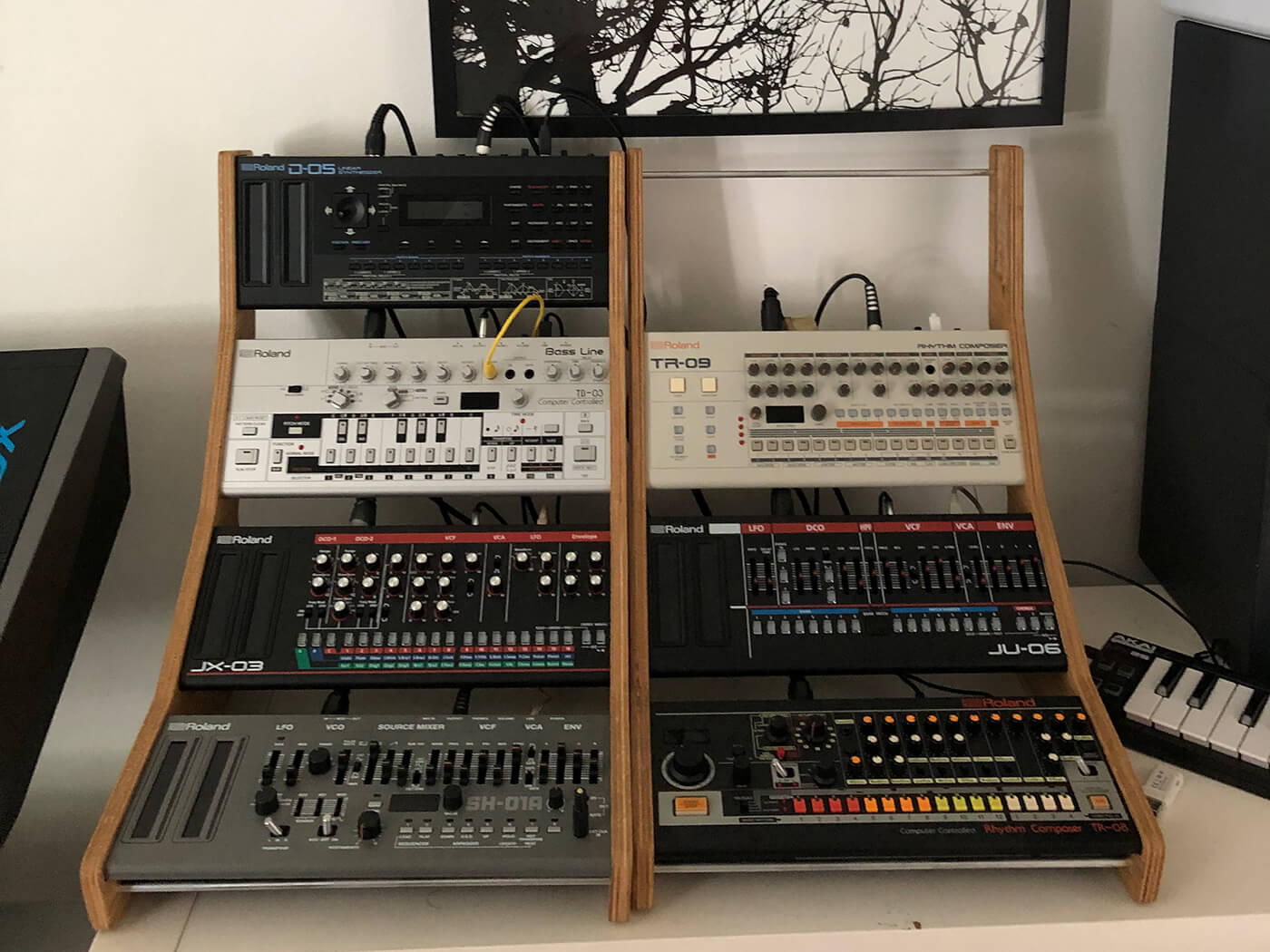 You’ve got a lot of Roland Boutiques modules – what attracted you to the format?

I’ve always loved Roland and in the past, I had all the originals except for the TR-808 and TB-303. When Roland launched the Boutiques modules, I fell in love with them straight away because of the size and the sound. Compared to the originals, they’re really easy to move around, especially when I have to perform live.

What gear are you most proud of and why?

It has to be my Roland SRE-555. I’ve always been in love with it and I’ve been looking to buy one for many years. I was so lucky two years ago to find a unique, almost-in-mint-condition unit in Tokyo, which always has been in a flightcase. It still has all the original replacement tapes inside! I was on a holiday in Japan with my family when I found it, so I ended up carrying it throughout the trip.

What gear do you use the most and why?

That will have to be my MPC. I’ve always been into MPCs since the 90s and it was the first hardware sequencer I really learned how to use after I sold my Atari. Since I upgraded to the MPC X, it’s gotten so much easier to use because of the MPC software. I do also use my Roland SRE-555 on all my productions these days, and especially when I produce dub techno. 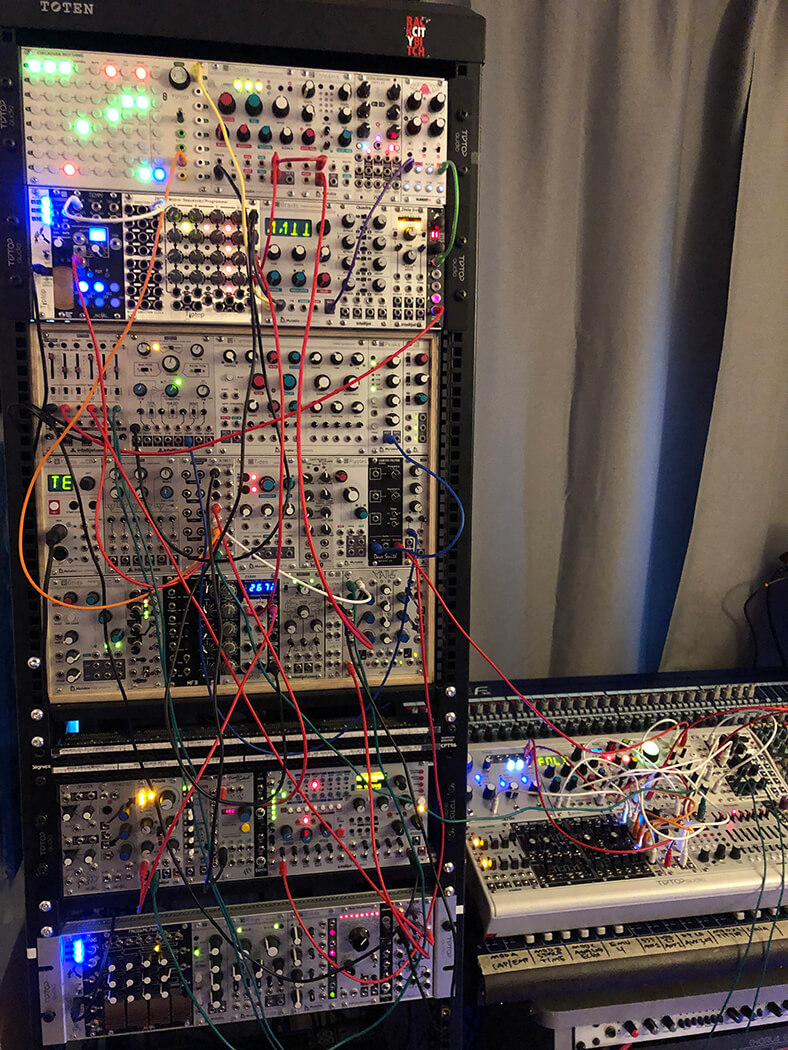 I use the studio professionally as a producer, but it’s also the main hub for my record labels Baum Records and Baum LPE. I record dub techno, dubstep music under my monicker Resoe, and deep house as Dennis Uprock. I have a project together with my best friend Kenneth Christiansen from Echocord Records called Pattern Repeat, which also is our own record label under the same name. Then I do library music, advertising work and also sound design under my real name.

Is there anything on your shopping wishlist right now?

A Waldorf Blofeld. I owned it previously, but regrettably sold it. I love the wavetable sound from Waldorf. It’s also compact and perfect for a live setup, but it’s a pain to program. I’m also planning to buy Hermod by Squarp Instruments for my modular setup. It’s a really versatile sequencer with some really cool features. 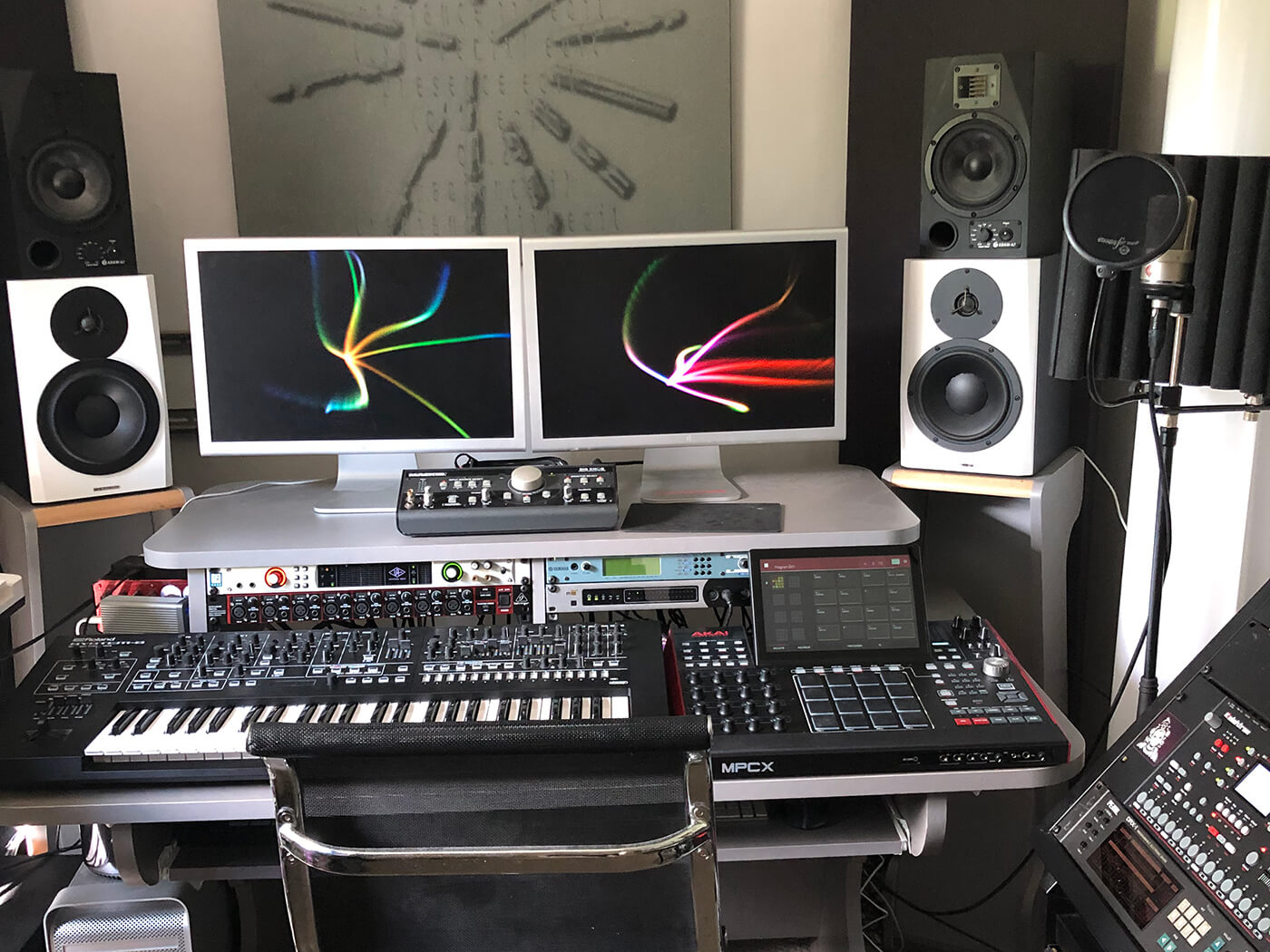 Trust your ears and gut when producing. When I’m inspired, I can lay down a track in less than two hours. But there are times where if I don’t feel the track within a couple of hours, I take a break and do something completely different to clear my head. If I forced myself to stay in the studio for many hours, I won’t feel satisfied with what I’m doing. I spoke with a lot of artists over the years,and most of them tell me that their best tracks were made within a couple of hours.

What are the main components of your studio?