Hello and welcome to my blog which will follow me through the latest revisions to my studio set-up. I’ll be testing different hardware, software and generally looking at the best configuration of gear to suit my own creative and workflow needs, while ensuring that it needs my requirements for a reliable and solid system for […] 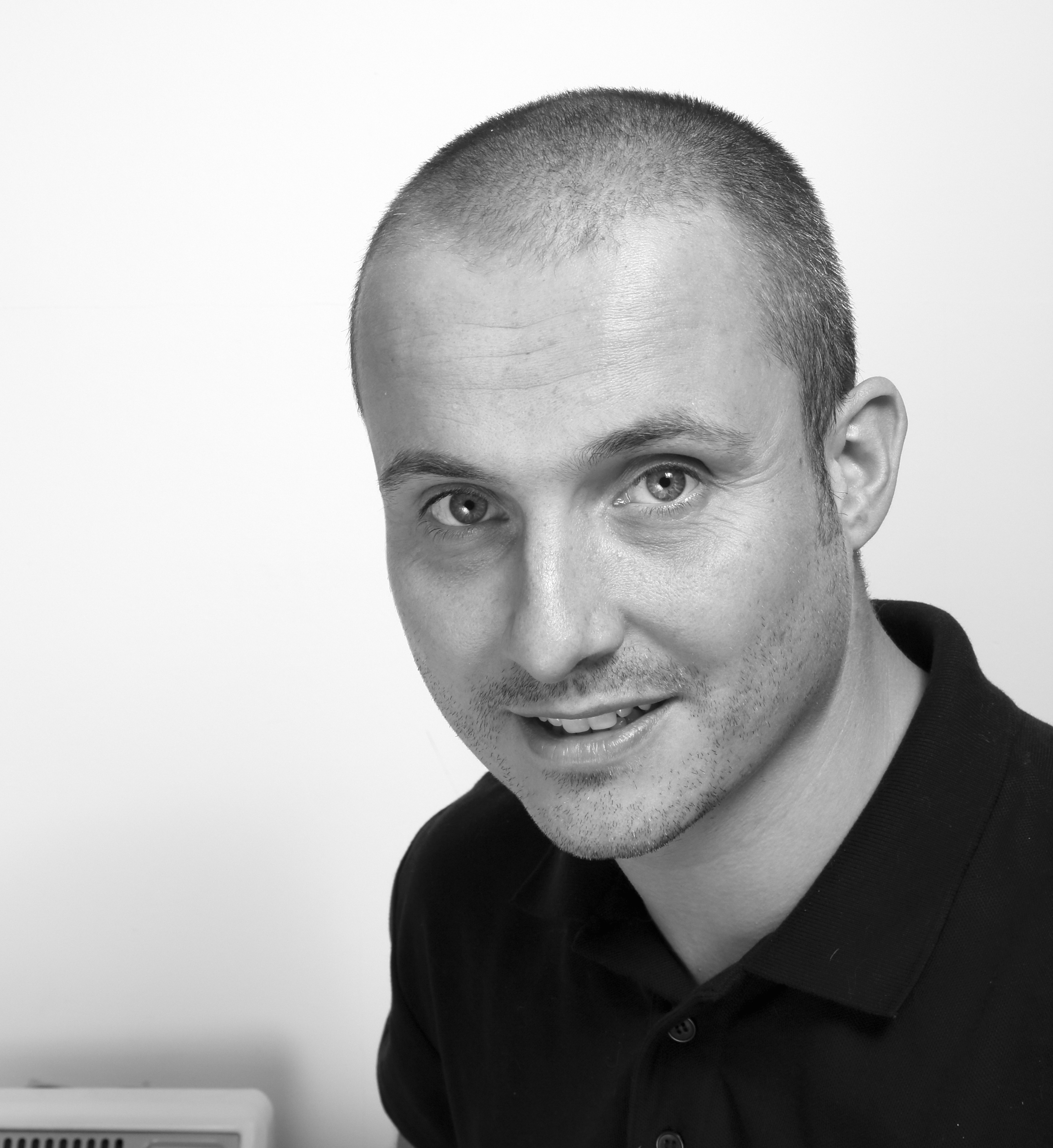 Hello and welcome to my blog which will follow me through the latest revisions to my studio set-up. I’ll be testing different hardware, software and generally looking at the best configuration of gear to suit my own creative and workflow needs, while ensuring that it needs my requirements for a reliable and solid system for performance.

I’ve had various set-ups over the years since I started electronic music production in 1996. The only piece of gear that’s stayed with me since then is my trusty Yamaha CS1X. Admittedly, this is used as a retro looking MIDI controller rather than a sources for my production sounds.

Otherwise everything else has been changed and it’s time again to cut out the fodder and streamline my kit-list to the bare essentials.

Within the last year, I’ve moved from a tower based, quad core PC machine to a Thunderbolt equipped MacBook Pro. So far, this change has forced me to step back in terms of workflow, making me aware of how I chose to use my computer’s resources. For instance, I can no longer run chains of live plug-ins to create my sounds. Instead, I’ve needed to re-learn the discipline I had when working in the early 2000’s with slower computers.

So I’m now printing more live processing to audio when they sound right. This then frees up processing power for the next piece of processing I need to do. One thing I’ve really missed since my PC days is the ability to run a UAD-2 card as I am a keen user of the colourful sounding range of plug-ins UA offer. Now that Thunderbolt has finally started seeing some support recently in the form of PCI-E chassis’, I thought now was the time to get set-up again with UAD. First I needed to decide on the right gear.
There are a few PCI-E boxes out there that can house one or more PCI-E cards for Thunderbolt connectivity. As I need only one card connecting, I’ve been looking at the cheapest units with just one slot. I decided to trial the Magma ExpressBox 1T (£495) and Sonnet’s Echo Express SE (£330). There’s quite a difference in price, so I’ll use this blog to report on how they differ from each other over a long soak test. 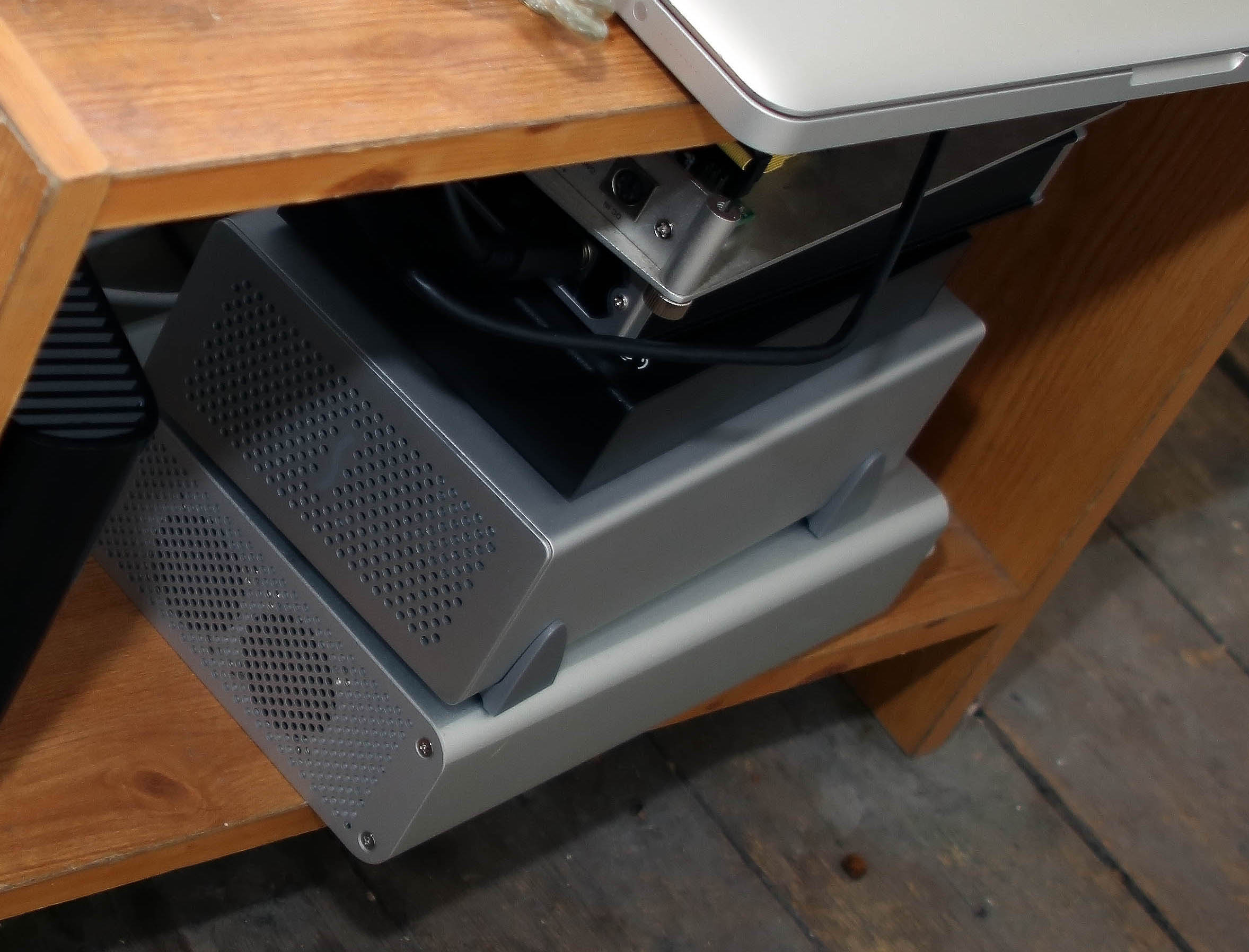 The Magma ExpressBox 1T is at the bottom of this stack with the Sonnet Echo Express SE above it. Both are similar in size and so far seem to perform perfectly well. More to come as my blog continues…

After setting up both units, they simply plugged in and performed as expected – to a point. The problem I had, was noise. Both units are quite small meaning they’re, in turn, vented by small, noisy fans. The Sonnet is quieter than the Magma at factory settings, but both dramatically increase the studio noise floor, which in turn causes monitoring issues. Fan modding is an option, but would invalidate the warranty. The Magma has variable fan speed, but you’d need to be careful not to fry your PCI-E card by reducing it too much.

Instead of these options, I decided to move the units out of the studio completely for the lowest noise floor possible. The hallway outside the door is just under five metres away and this is where the next problem arose, as Thunderbolt cables come only in 0.5 and two-metre lengths and cost £25 and £35 (Apple Store) respectively (these chassis don’t come with Thunderbolt cables BTW). Thunderbolt cables currently use copper to transmit their high-bandwidth signal, so the length limit avoids loss in signal integrity. I therefore had two options: wait until later in the year for the optical cables I’ve been reading about, or move the Thunderbolt boxes and my MacBook out of the room as well…

Connectivity is almost at its most extreme, so I will look at alternative options for my audio interface next. The CS1X connects via MIDI to my Scarlett USB interface. My trackball runs through the keyboard which uses USB. I also connect a hub up to the keyboard for USB copy protection devices.

In the meantime, I’ve got the system wired up with extender cables for my LCD screen over DVI, two USB extenders and all connections have been tested as working fine – so far so good! I’ll try a few mixes on it over the next few weeks to see how it fares. I haven’t wired up my USB hardrives yet, or my other USB MIDI controllers, so I think the next step will be sourcing a reliable USB hub and possibly switching from USB to FireWire for my audio interface. This will hopefully free up the USB bandwidth and connectivity for my more various USB controllers and hardrives. Back soon with an update… 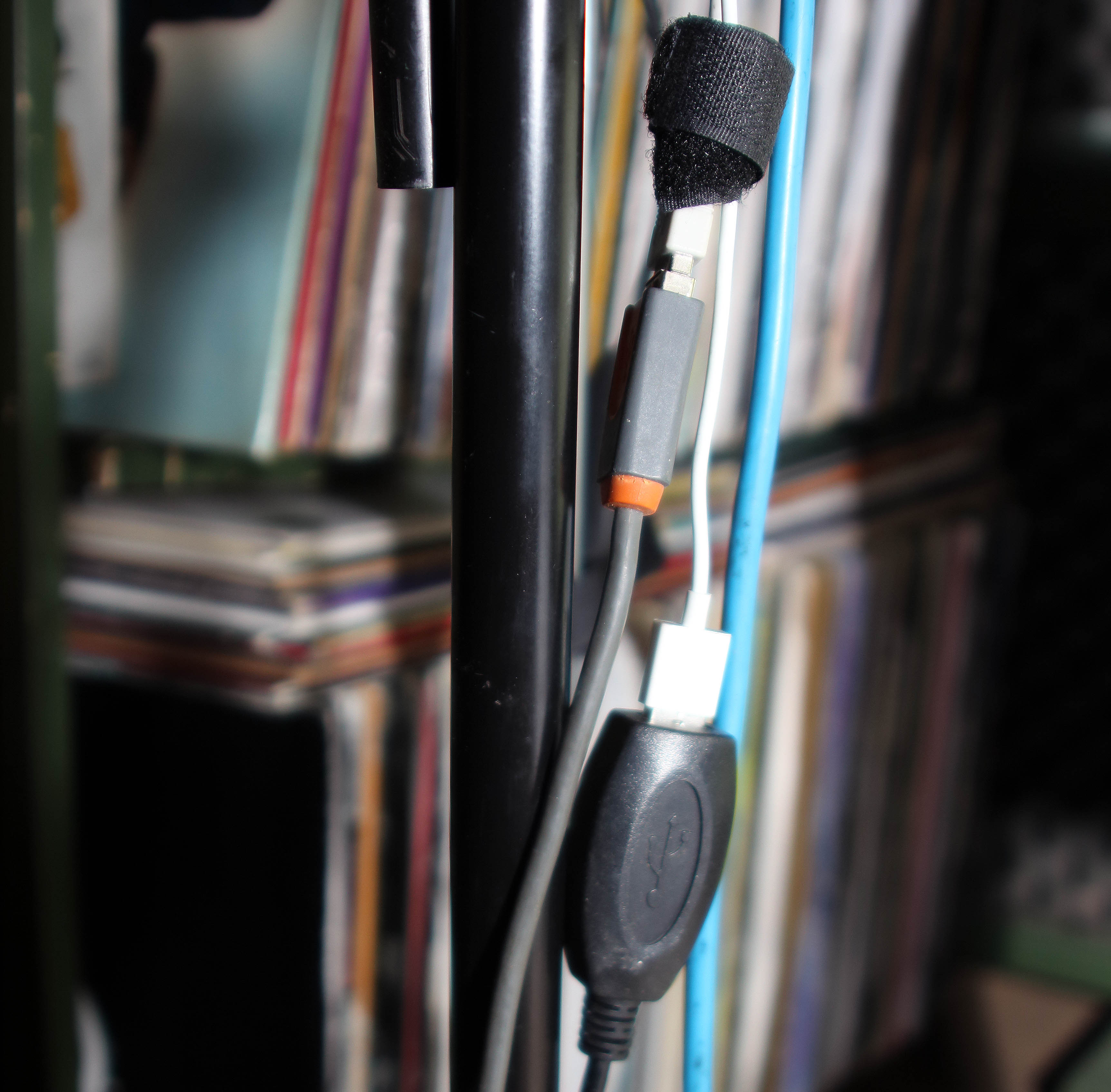 I’ve used two separate USB extender cables so my audio interface gets a dedicated connection to my MacBook Pro. This leaves the other USB port for less performance essential items to run through.