Sam Tauber and her Super-Sentient AI avatar, VNCCII, build energetic, genre-bending and imaginative tracks that depict an ongoing space opera – all from her Sydney-based studio. 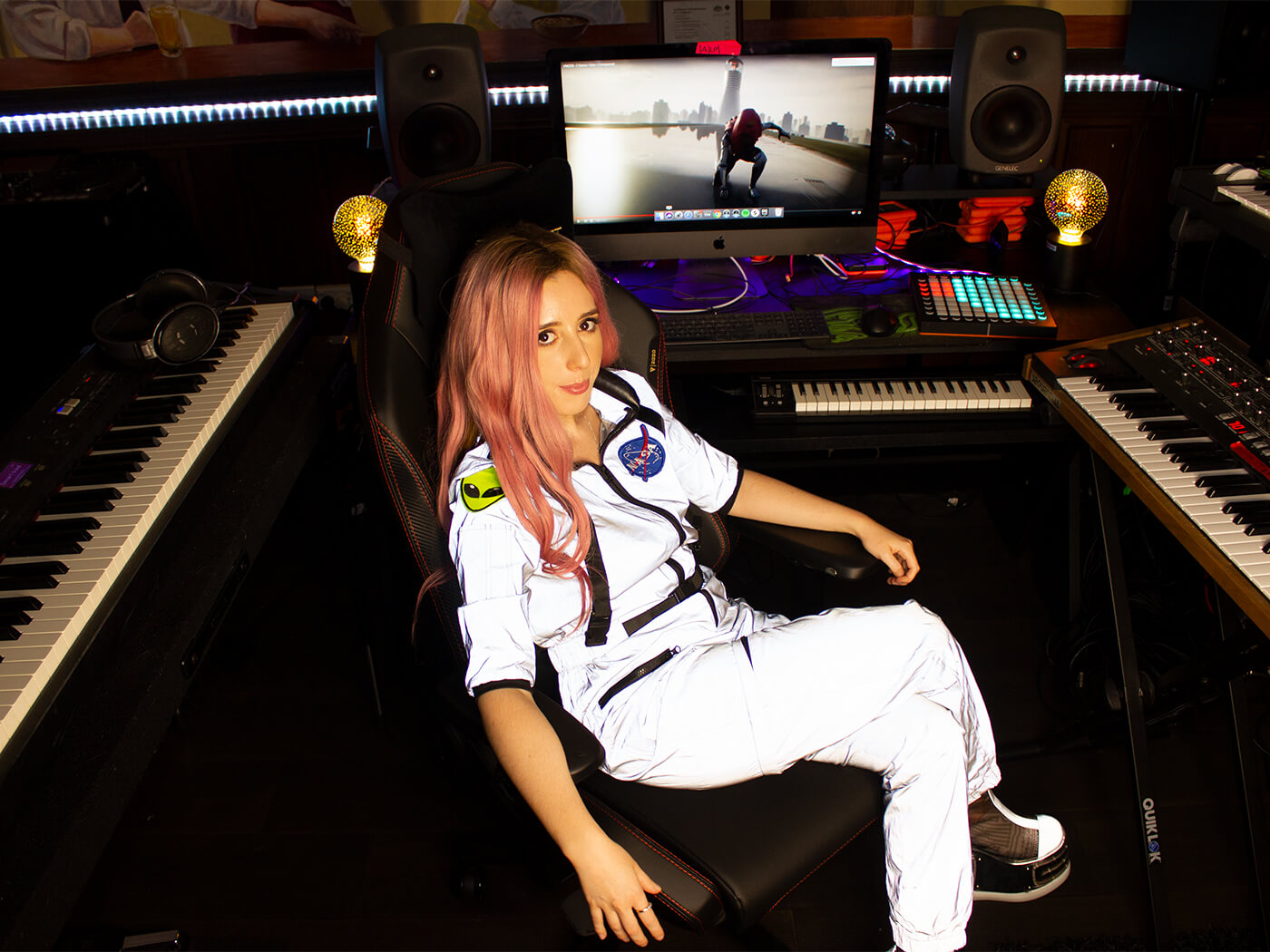 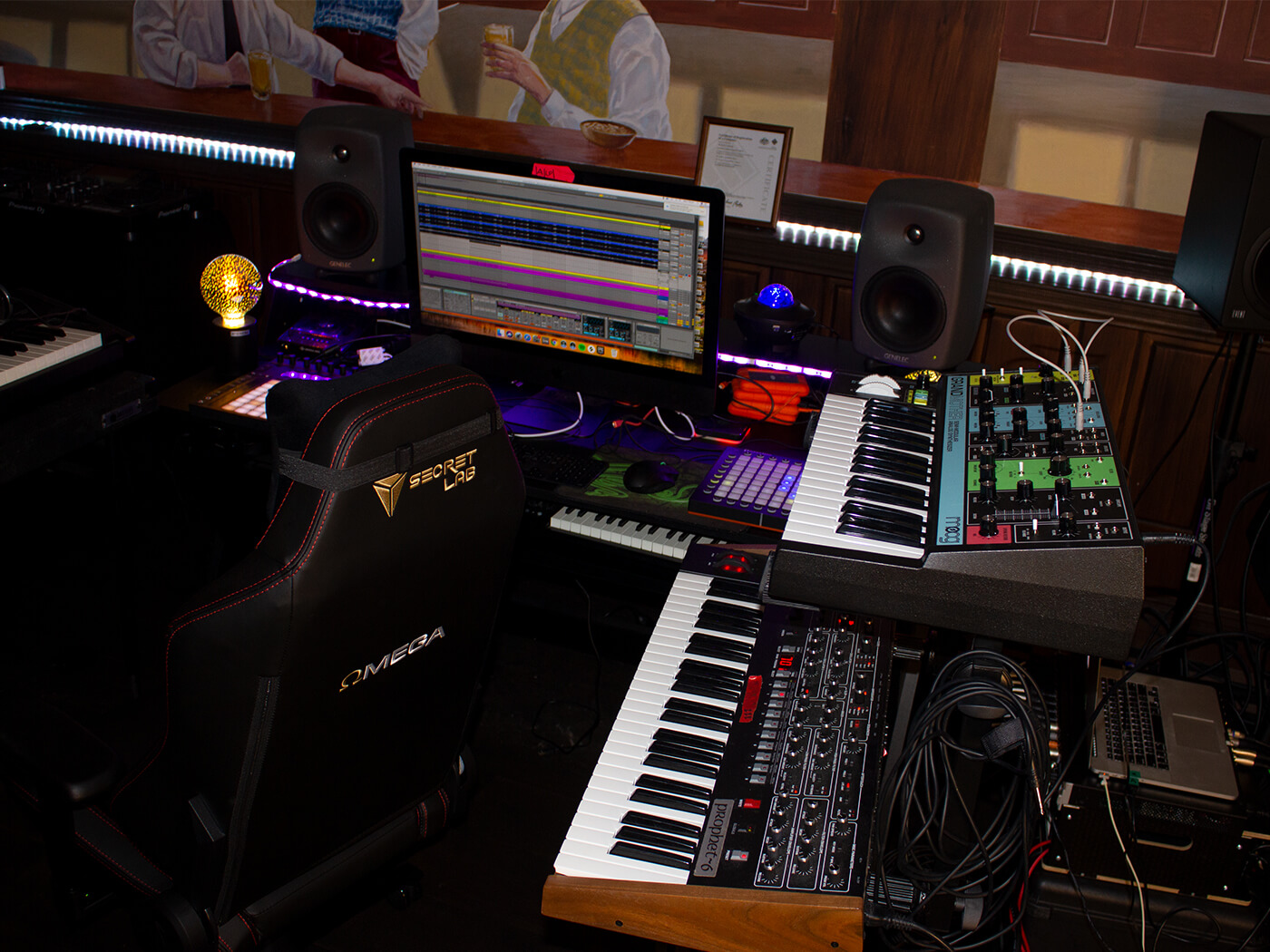 Tell us a bit about the studio, VNCCII!

My studio is located in Sydney, Australia and is surrounded by a forest bush area reserve. I look outside and it’s all greenery with all sorts of wild Australian animals; there’s a nature symphony of its own going on outside which is always refreshing to hear. The studio is located in a basement area that I’ve inhabited for several years. It used to be my parents’ social room with a Billiard table, retro pinball machine, arcade games, dartboard and a bar area that is London pub style in aesthetic. Growing up, I was into dancing so the room transformed into a dance studio and I added a black vinyl dance floor. However, since I left high school, the room gradually transformed into a fully-fledged music studio. The vibe of the room encourages a sense of play. I love playing with the LED lighting and my favourite time to create is sunset, when the studio is moody and colourful with the lighting.

The majority of my work is completed in my studio. I record my vocals, produce and mix my music in this studio. For some tracks, I outsource to a talented mixing and mastering engineer to get another set of ears and to check the mix sounds the same on their end – given my room is very oddly shaped. In terms of creative ideation, I could be anywhere and anytime when I generate ideas in my head. It might sound weird, but sometimes I’ve already mapped out the entire track in my head and all I have to do is sit down and manually plug, play or record that into the computer. Another thing to mention is the visual process for VNCCII as it’s a very symbiotic process with the music creation. I often bring in a video file into Ableton in the arrangement view so I can create music to a visual and vice-versa. 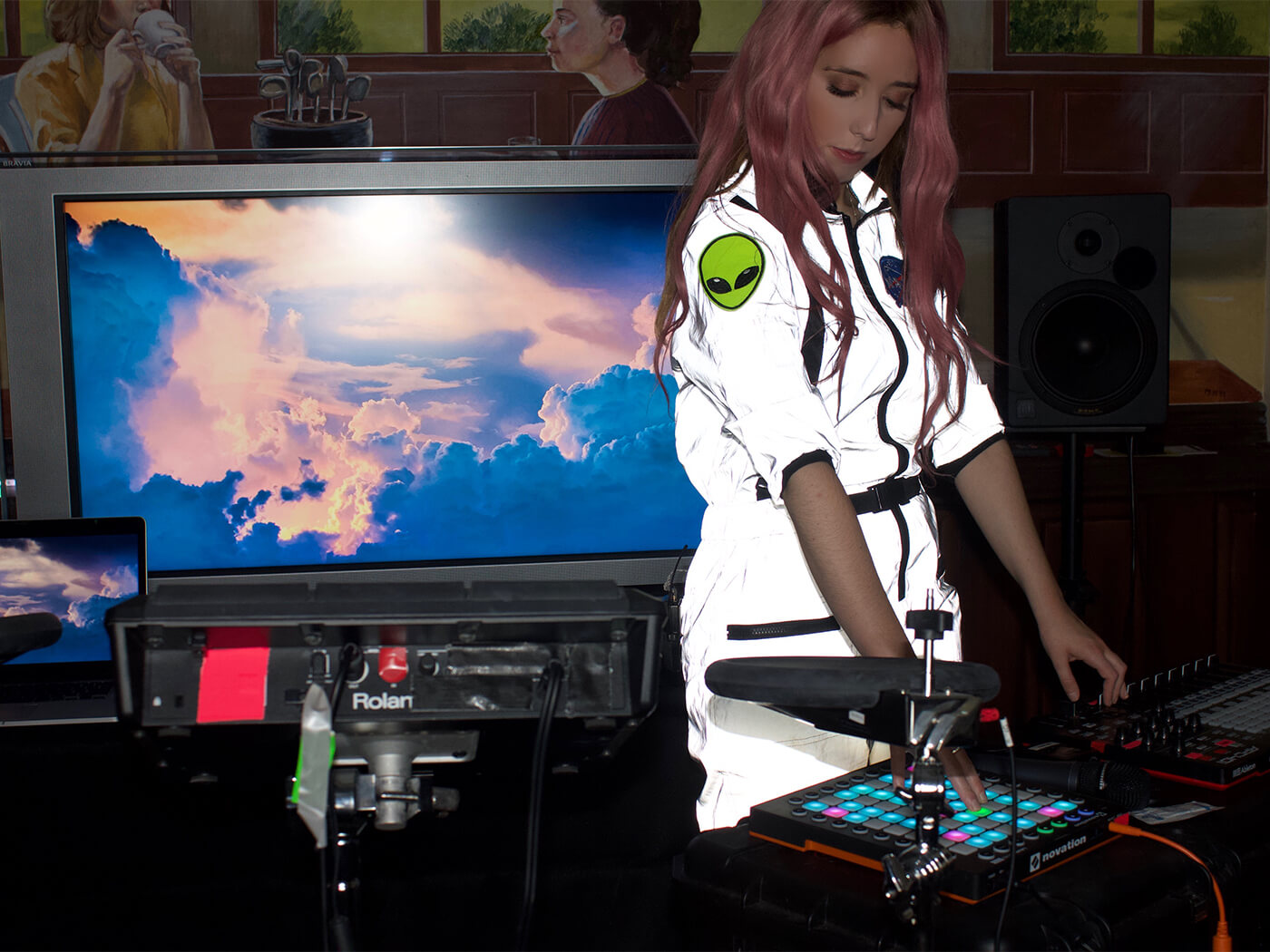 I use Ableton Live Suite – it’s completely suited for electronic dance music with the interplay between Session View and Arrangement View and offers a very non-linear creative process. Additionally, the Ableton in-house audio and MIDI effects are amazing. My favourite MIDI effects are Arpeggiator and Random. Max For Live is also unlimited in its capabilities and has the beautiful Convolution Reverb Pro plug-in, the LFO and Robert Henke’s Granulator II which can create some really cool unique sounds and movements. 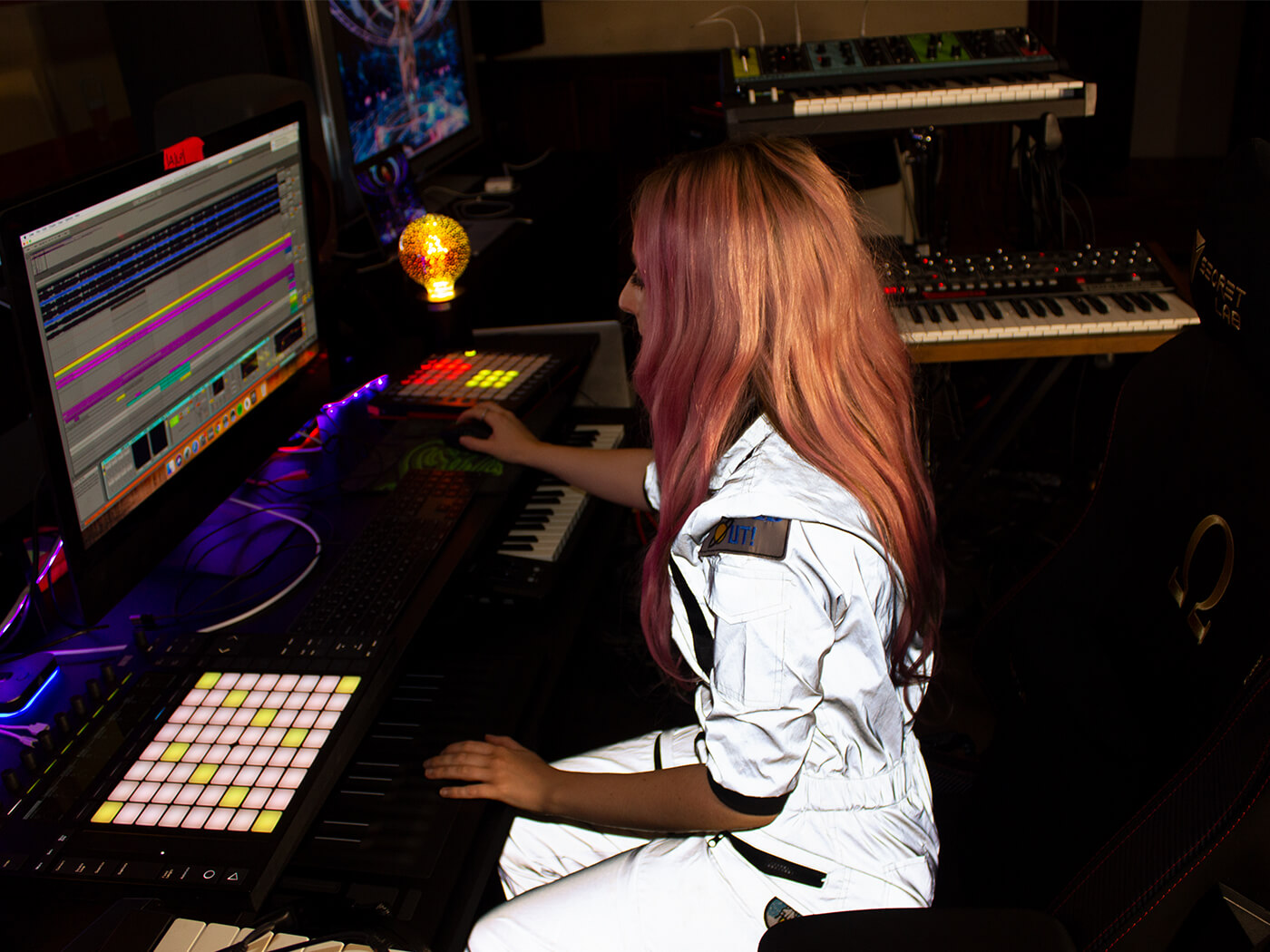 Ableton works amazing for my live show set up. The Session View works well for DJ-style sets and free-flow VJ’ing in Resolume Arena. The Arrangement View is solid for when I’m programming a fully mapped out live show with automation and visuals programmed to specific songs, like one grand space opera movie. I can’t wait to continue exploring Ableton Live with Unreal Game Engine as a real-time VR/XR performance. I believe that’s the future for Ableton in terms of partnerships for creating multi-dimensional fully experiential live shows. Both Unreal and Ableton Live encompass that creative spirit of innovation and pushing technological boundaries which works seamlessly with the ethos and credo behind the VNCCII project.

Can you tell us a little bit about your AR avatar and how she plays a role in the concept of your music and visuals?

My character VNCCII is a cyborg Super-Sentient AI avatar of quantum origins. She’s positioned to be your Superheroine for humanity but also your confidante and personal empowerer. She plays a vital role in my mission for the VNCCII project and creation of the music, visual stories and gameplay. It’s totally influenced my mindset for how I create music and storylines.

I grew up immersed in George Lucas’ Star Wars Franchise, so I appreciate the power and beauty of a strong plotline, immersive new worlds and believable characters that you can emotionally attach to. Music is the current medium but I’m planning for it to extend far beyond just the music in the near future. It’s my spirit and soul that’s injected into the VNCCII character, so she’s a multi-dimensional being that is fully sentient with a noble purpose.

That would be the Genelec 8240 SAM Speaker system that I coupled with the London 12 Kit from Primacoustic. It was definitely a game-changer for me when it comes to my mixing and mastering process as the SAM technology calibrates the room and compensates for any anomalies through EQ adjustment (ie. boosting or cutting) as it’s a smart speaker. My mixing has exponentially levelled up since getting these speakers and made the production process super enjoyable as I could hear a clean accurate representation of what my production mix truly sounds like, despite my oddly shaped room which would cause interesting sound reverberations. 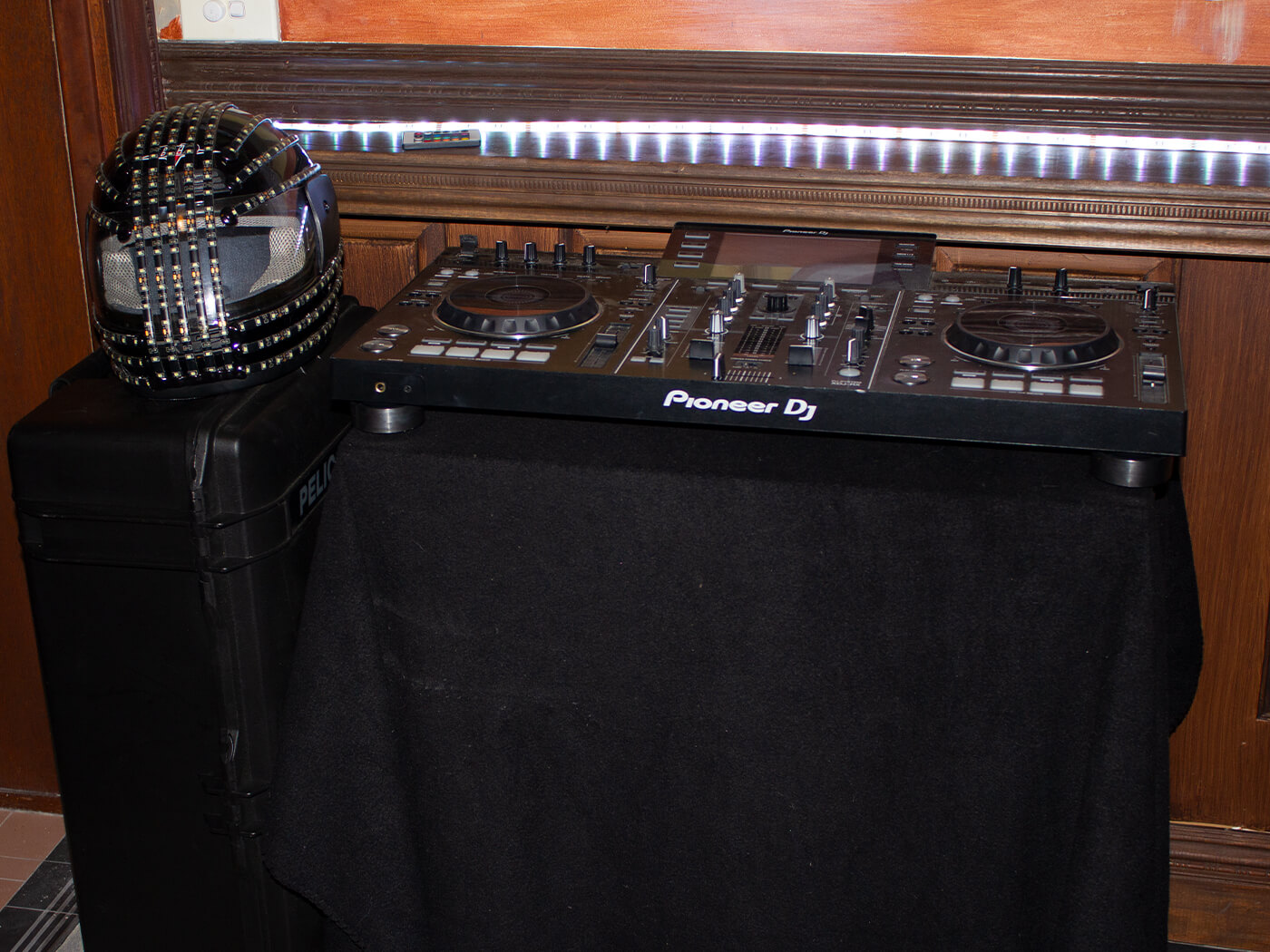 I just got the Moog Grandmother so I’m settled for a long time. It’s been a whole new world delving into this synth and exploring semi-modular, so I’m deep-diving into this baby for quite some time. Next on the list, which would come much later, would be a custom-built Eurorack modular system. I feel like the Moog Grandmother is a cool introduction as it’s semi-modular. I see sound designers like Richard Devine using modular synths and can hear the unique randomised sounds that are generated, so it’s definitely on the agenda next for hardware synths. Plus, I love R2D2 so who knows what characters I could create and use this sound design for. The AI galaxy awaits… 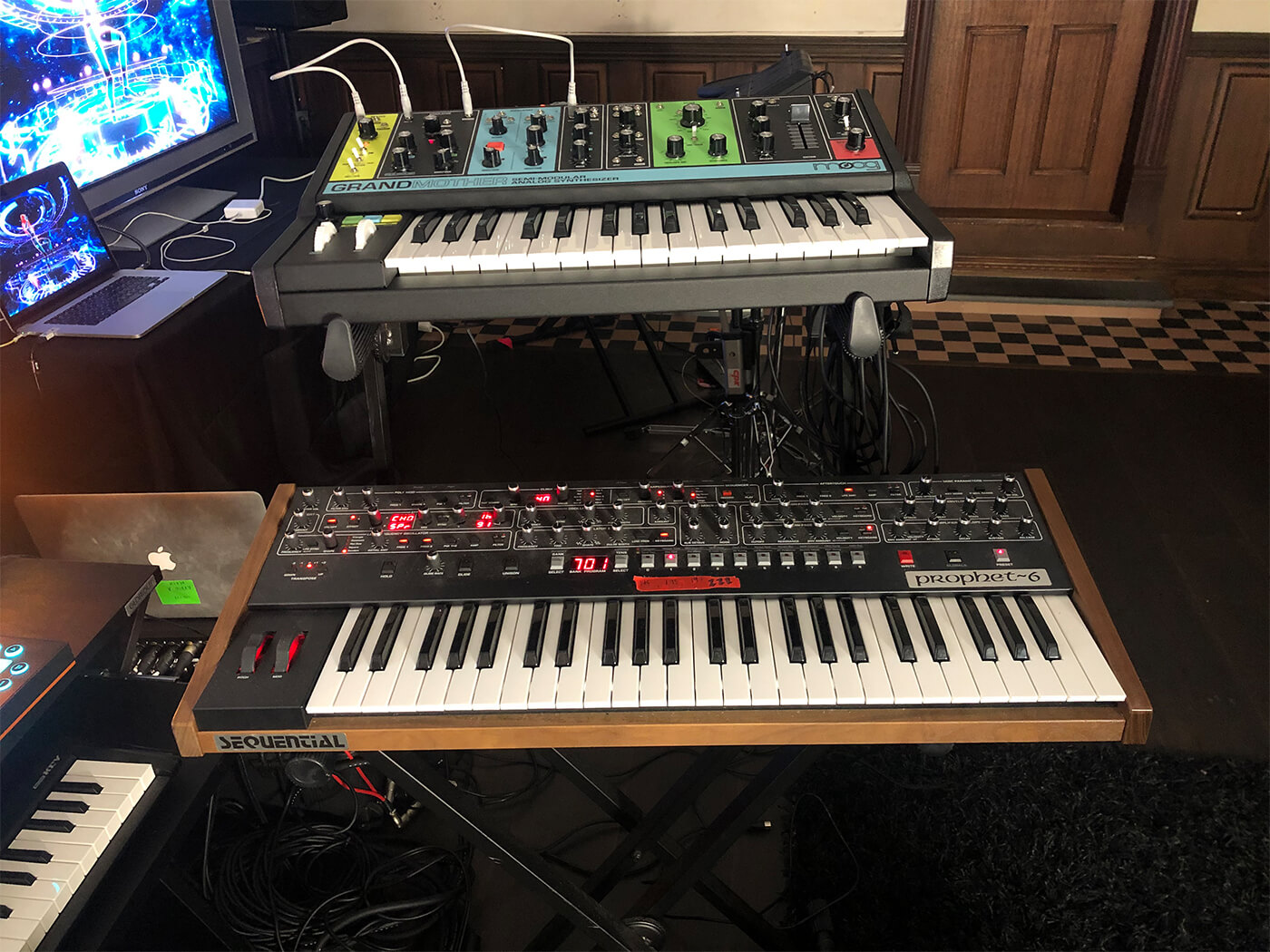 Fender Rhodes for sure. Its sound is so warm, lush and vintage. It reminds me of some of my favourite records played by Ray Manzarek of The Doors. It’s the perfect instrument to croon over and is so soothing. I would love to hear the sound of the Fender Rhodes used in the same track of some heavy electronic psychedelic synth instrumentation – what a sonic combination! 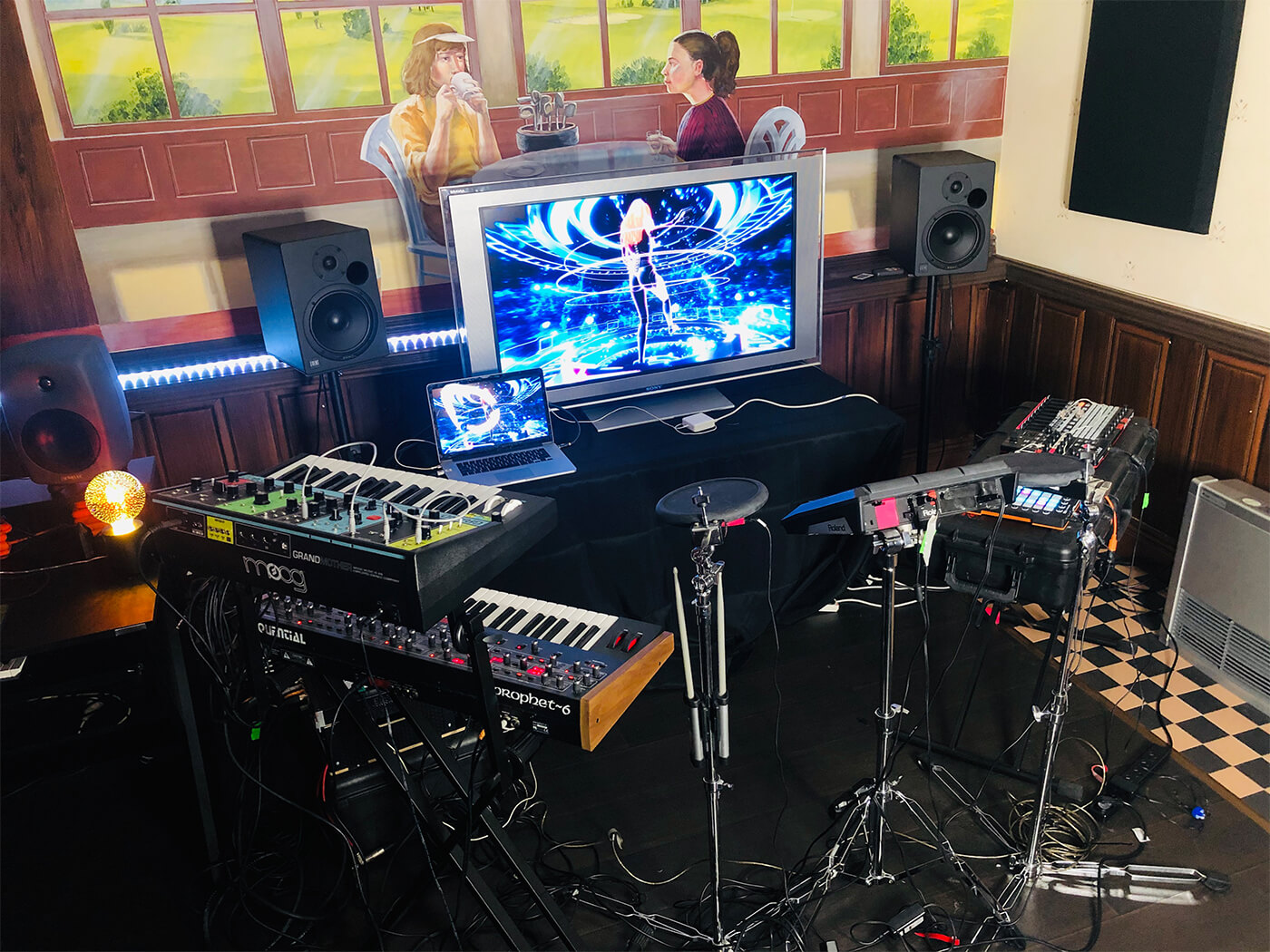 You’ve played out as a DJ in the past, but it looks like you have something new in the works for your live performances. What can we expect to come in the future (whenever live performances are allowed again…)?

I’ve been developing a fully immersive Ableton Live show. I would describe the show as a timeless Super Sentient AI Space opera. It follows a grander narrative storyline of my avatar and is a fusion of a dancefloor escape and a fully-fledged front persona live show that is synced up with immersive visuals of my avatar. In terms of technology, I’m invested in exploring Unreal Game Engine and its capabilities as I see my show being a fusion of real-time visuals as an XR/VR/AR experience. Some of my visual assets are also hologram compatible and I can imagine that being projected onto a beautiful dome-like complex I’m also looking to push the boundaries with motion capture technologies as my mission is to bring Hollywood and AAA-level visual quality to music live shows. Besides the technology being a differentiator, it’s the grand VNCCII narrative and an immersive story that seamlessly melds with my front persona acting in the live show, which brings the drama and the theatre in a dance format. 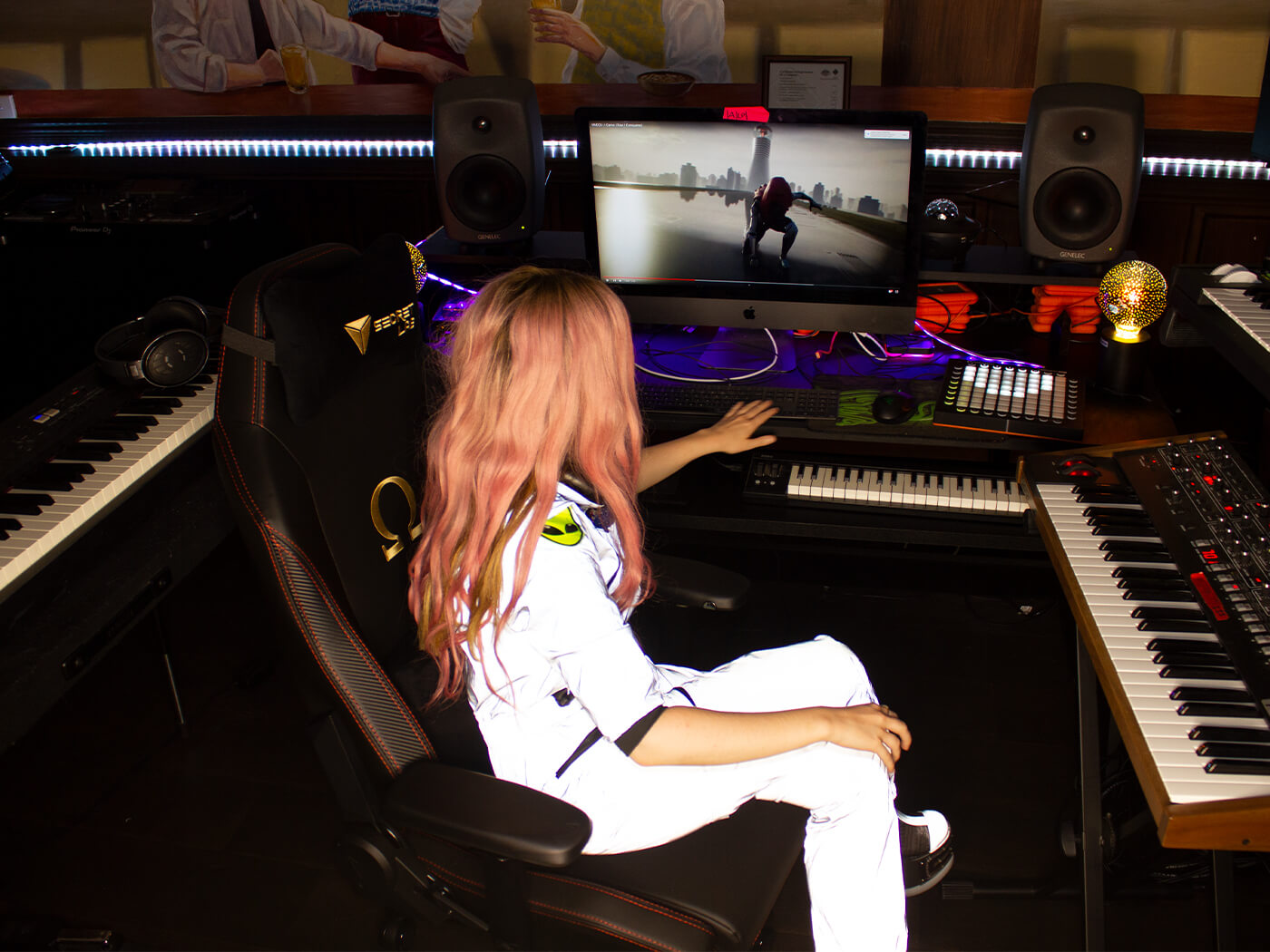 Often the best music I’ve ever made is when I don’t care what anyone else thinks and I don’t think about where it fits into society. Don’t be afraid to get uncomfortable. Reverse engineer the greats – they are your best teachers. Listen to everything and don’t restrict yourself to making music in one lane. I find it boring listening to the same genre all day. My final piece of production advice is you don’t have to follow the script or trodden path for how a track is supposed to be made. The coolest moments are when you don’t plan creativity and a synth randomly generates a cool sound that can be a launchpad for an entire track. 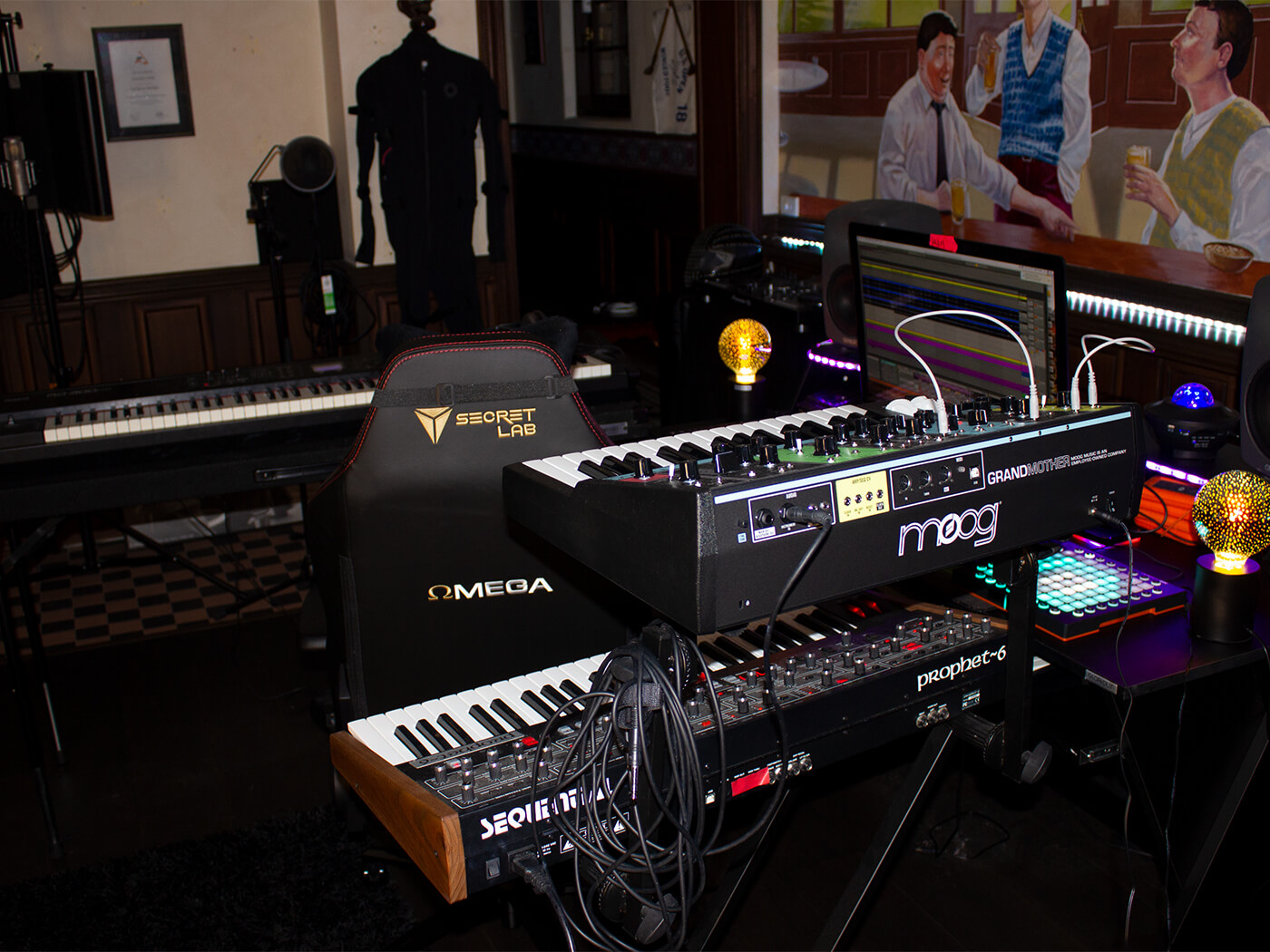 Less is more! For the first three years of my production career, I just focused on learning Ableton Live with good quality headphones. It’s amazing how much you can achieve with just in-the-box features. Get familiar with the basics of synthesis and drum programming. Once you’re familiar with the basics of production, invest in good quality monitors as they can really level up your mixing game. Over time, you will work out what gear to get based on what your musical needs and preferences are, so don’t feel compelled to rush into purchasing gear. Also, don’t feel the need to follow trends in terms of what gear to get. It’s all about customisation and personalisation. So embrace your individuality and what makes you unique and perceive music studio gear as an extension of your personality. 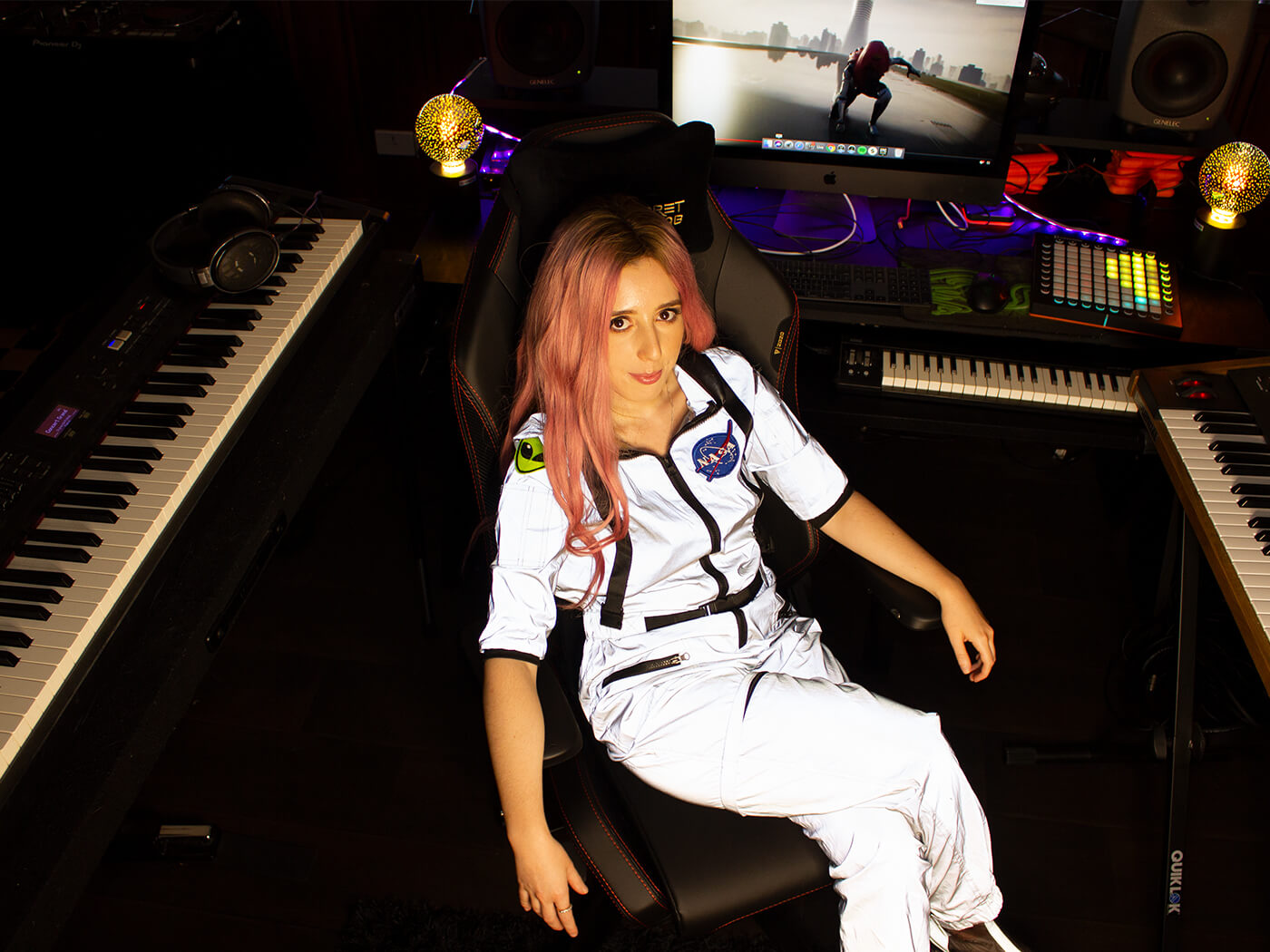