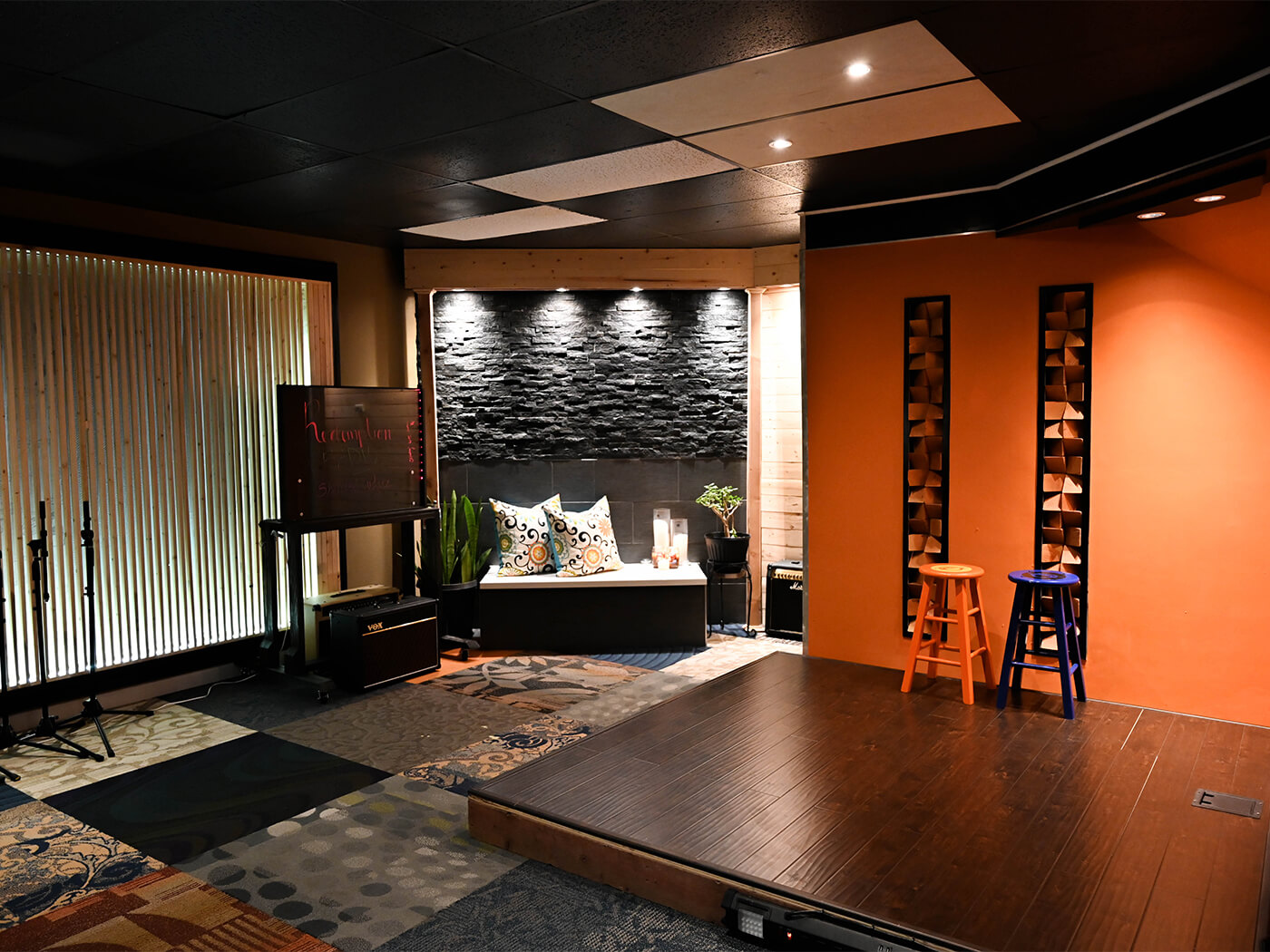 We record everything that walks through the door, from worship bands to big bands, rap to rock and even medium-sized orchestras. We have film and TV scoring projects, shoot music videos, Facebook and YouTube Live sessions. Everything from pre-production to post-production. We also teach music lessons through our free music lessons program.

We hold gatherings for local worship leaders once a month so that they can get to know and pray for the other church musicians in the area. We’ve filmed and recorded recitals for students from the Idyllwild Arts Academy, Idyllwild CA. We conduct the basics of our research into utilizing music to help stroke, Alzheimer, dementia and PTSD patients with recovery from their disease process. We host clinics for local high school bands, where we take drumlines and put them through their paces. And I think we’re going to start doing a jazz club night twice a week this summer.

Tell us more about RRSSOZ!

The studio is located at 1520 S. San Jacinto St, Suite 5 in San Jacinto CA. We have a little over 1500 square foot of space. We have a Studio A and B with two separate control rooms. There are 16 channels in each, but we can link the studios together for 32 physical channels. Studio A is approximately 20×20”, Studio B is 20×11”. We’ve been here since February 2018 but officially opened since August 2019.

We’re a 501(c)3 non-profit, we accept donations whether of a monetary or gear nature. In return, we give a tax write-off. Whatever proceeds we make go back into funding instructors for our free music lessons program and helping to pay the day to day bills.

At first, the idea behind the studio was to record the music and messages for Redemption Radio, a radio preaching and teaching program Dr Craig started out of his house. However, it quickly morphed into everything from a recording studio open to the public to a learning centre for all things music and recording arts and periodically a jazz club!

Can you tell us the story of Redemption Radio?

Dr Craig and I met in the summer of 2017. He had a radio program ministry called Redemption Radio and needed some help to record local worship artists and program beats for them. Doc asked if I was interested in making $140 a week to help him one day a week. When he had mentioned that he had built a studio, I envisioned something huge, being that Doc is a pilot, a former ER Doctor and currently a dentist for the last 30 years. Wrong!

He had taken up his wife’s living room with some R-tech insulation, a jimmy-rigged plexiglass door, a broken square piano from 1825, a MacBook Air, a Focusrite Scarlett 4i4 and 2 mics, a french horn, a set of bagpipes, 3 harmonicas, 2 pair of headphones for monitoring and a few busted mic stand being held together with duct tape. But hey, it was more than I had at home, it paid, and I was happy and considered myself blessed to be serving at a radio ministry.

I kept hounding Doc saying “let me help you build something cool here in your living room space”. The space was about 150 square feet, a decent size for a home studio. He kept saying no, but then the day came that Doc’s wife wanted her living room back. That led Doc to say to me, “we need a place”. We searched around and found a 1500 square foot office space in a building which belonged to a guy who loves helping ministries out. 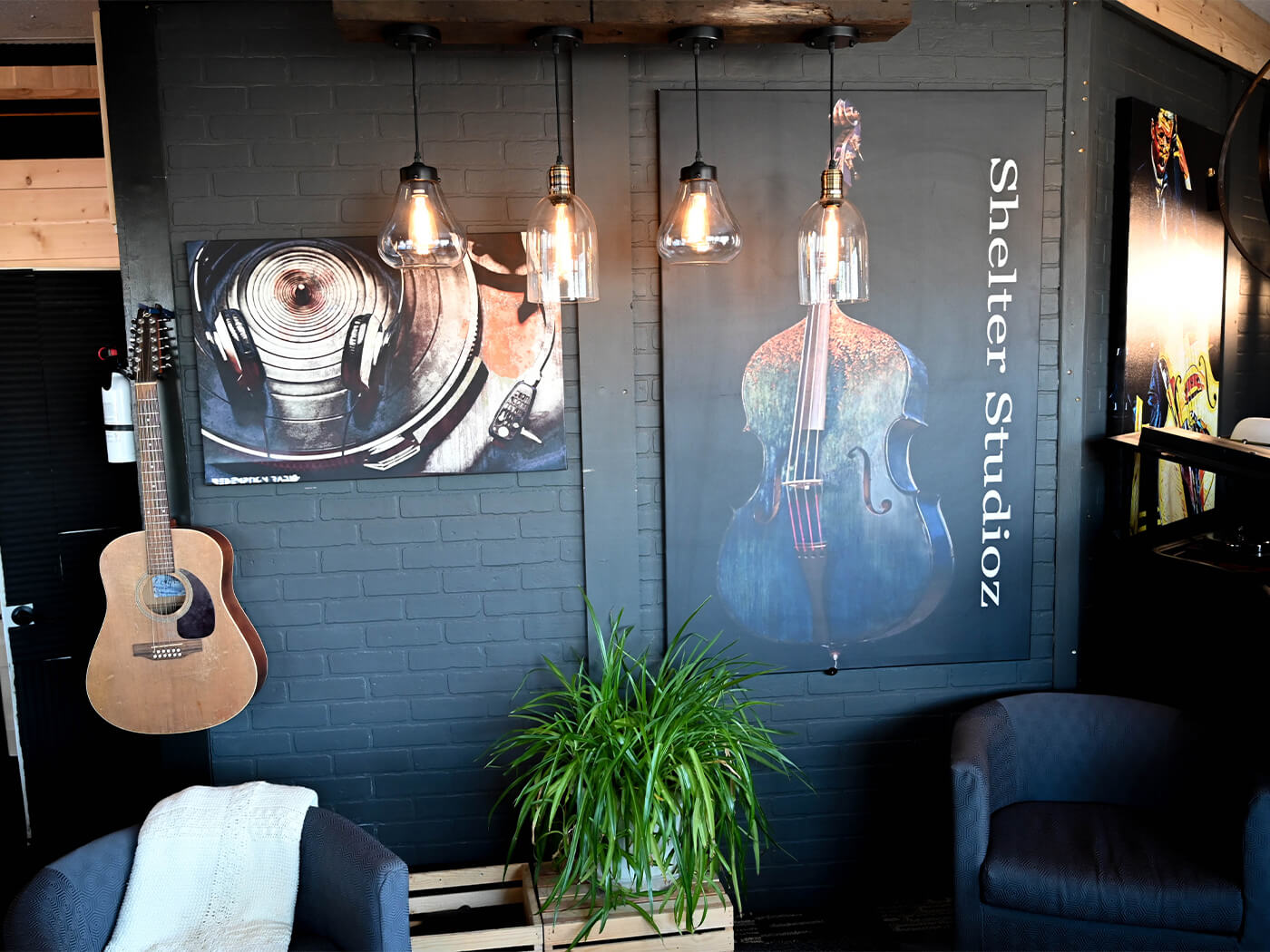 He gave us a killer deal on the place and signed us to a two-year lease. We had a wall that split the space, a room and a bathroom. Doc says, “a couple of walls and a couple of weeks and we’ll be ready to make music”. Two years, seven more walls, six more rooms and an entire refit later, we put the tools away and started doing some basic work on the radio program. But in our defence, the two of us knew nothing about construction.

We learned everything on YouTube, by trial and error, and asking friends who knew construction for advice. Eventually, we got a brother named Kevin Moore from a local drug rehab ministry who played congas and happened to have been in construction for 40 years, and Dr Craig’s son who also did some contracting. 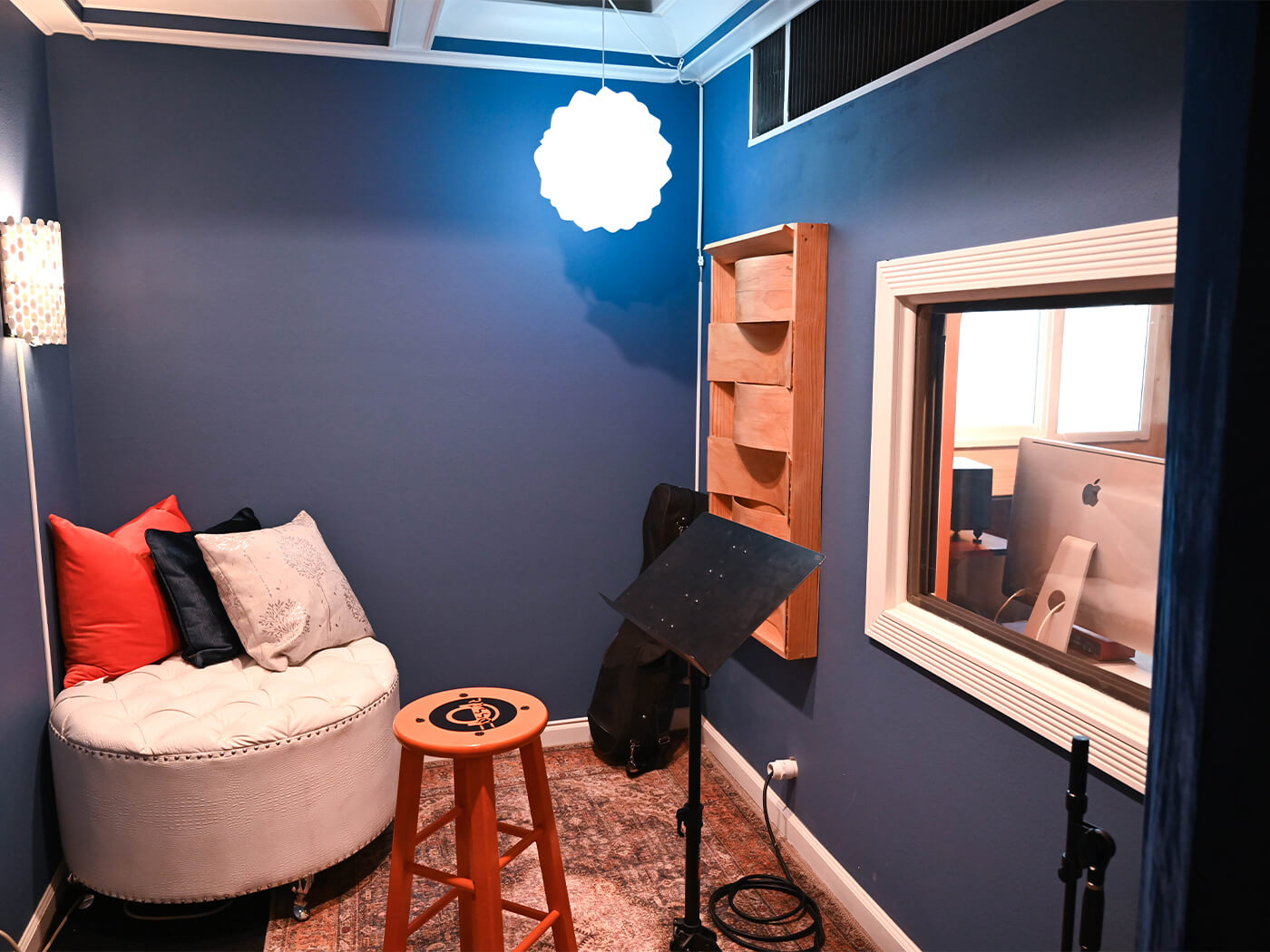 What kind of artists and musicians perform at Shelter Studioz?

We record every kind of music and musician you can think of here. This summer we have Eve Evans coming with a big band, the MT San Jacinto junior college big band will be in the house this fall, Marshall Hawkins (former bassist for Frank Sinatra, Miles Davis, Tony Williams, Shirley Horn, and others) will be recording his next project here.
We’re currently scoring and film editing for a documentary on Leonardo Davinci’s Last Supper painting. The music genre for the film will include classical styled pieces, smooth jazz, African pop, straight-ahead jazz and a few others which will be composed by our in house staff.

Our free music lessons are becoming a big deal around here. We teach anything you want to know about music, from music theory to lyric writing, how to use a DAW, basics of synthesis, music history, harmony, recording engineering, and whatever else you want to learn.

We’re doing some preliminary work with Sean Bennett who has a double PhD in Piano Performance and Neurology from Cambridge. The goal is to start a research project to see if we can help reverse the effects of Alzheimer’s, dementia and help stroke patients recover quicker and more completely through music lessons. It’s a bit complicated but the basic idea is to overtax the brain with a difficult task, like learning the piano, so it has to grow new neural paths.

One of the studio’s projects that’s close to us vets here at RRSSOZ is our Power Through Song 2 heal R Defenders (PTSD) music program. It’s a program designed to help vets with PTSD using music composition and instrument playing to help cope with their trauma. While the Jerry Pettis VA hospital in Loma Linda, CA has a guitar circle for vets with PTSD, it only lasts a few weeks. The vets would like to continue but nothing is available. So we’re currently in touch with the VA hospital to see if we can arrange to be an extension of their program which will allow vets to continue with their treatment through music here at RRSSOZ. Again, like all of our teaching programs, it’s free.

How are you adapting to the challenges arising with COVID-19?

We’ve been able to continue work because we have multiple rooms allowing for social distancing. We had a church record it’s Easter Worship service here by having one person at a time come in to record. Due to COVID-19 causing school closings, we’ve had a student come in and record their solo recital with only one staff member here. It was an interesting situation. They came in, the piano was all set up for them, the engineer was in the control room with the door closed, he started the camera and the DAW, the student sat down, performed his recital and left. Zero contact. We have churches sending two-person teams over to lead worship nights for their respective church’s social media to encourage and give hope to the public in this unprecedented stressful time.

As regards to the music lessons, we’ve been using Zoom, which has been great for us. Our piano students were directed to goto www.midiculous.com and download that company’s free software that allows us to see what they’re playing and allows them to see what we’re playing. We’ve recently purchased two cameras so we can do drum lessons as well. Through Zoom’s whiteboard function, we’re able to continue teaching theory in both a classroom and private lesson environment. We had some students create a YouTube channel as a way to help them remain close with their other music classmates and share ideas. 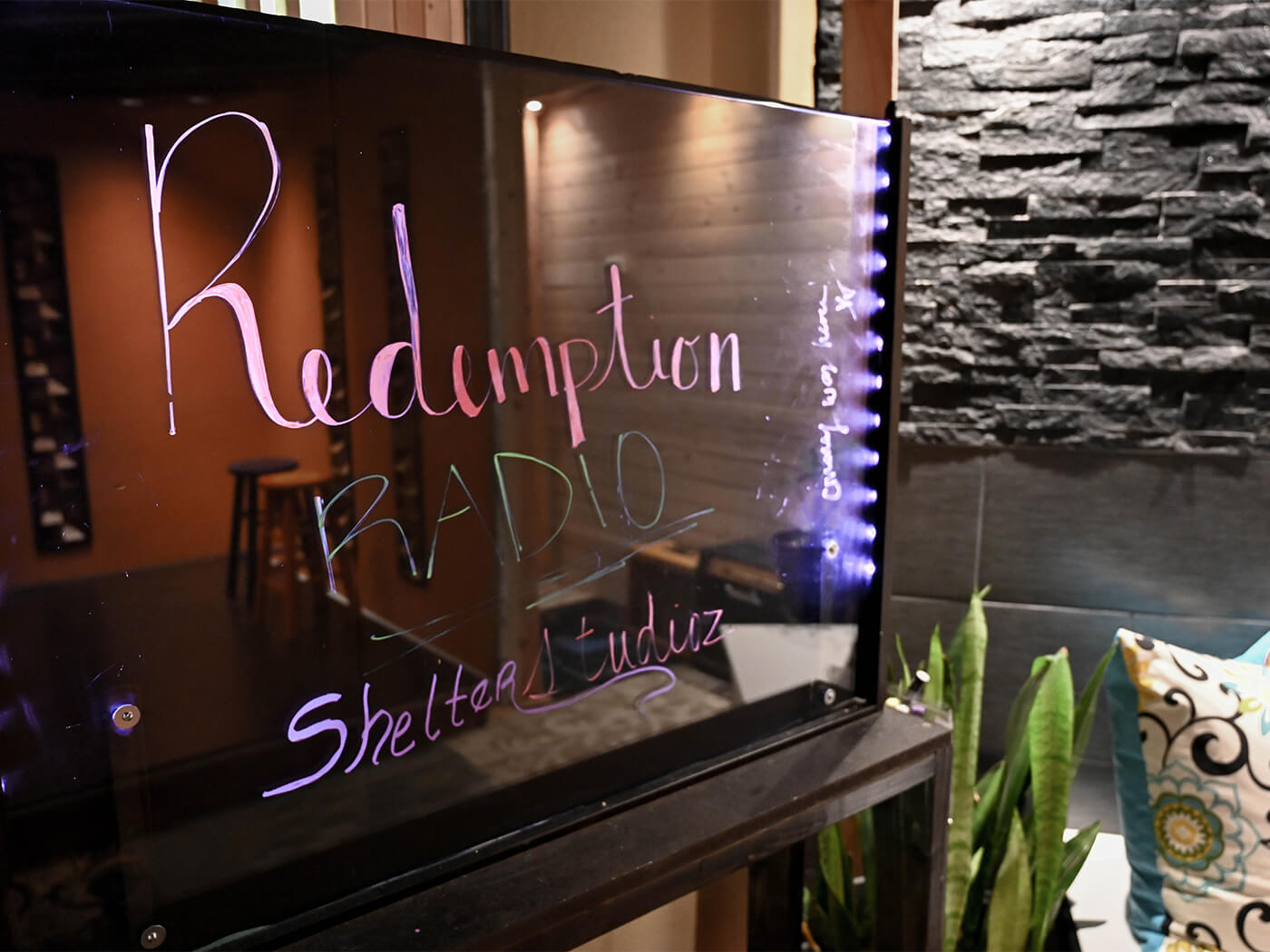 Which DAW(s) do you use?

Logic Pro X. All of our friends own Apple computers for the most part and some version of GarageBand or Logic, so it just made sense to use a platform everybody is already familiar with. I use Cubase to do my sequencing; I’ve been using it for the last 20 years, so too lazy to change I guess!

I was once recording drums at Paramount Studios and Zakk Wylde was there recording with Black Label Society. When I asked how long he’d been there, he said, “all month”. It was then that I decided that if I ever built a studio, I’d ensure it had a homely vibe,where people could feel comfortable creating.

Our copy version of the Modson FT2 studio desk. My two sons Aaron, Michael and myself built it by reverse engineering it. Dr Craig’s favorite piece of gear has to be the Avalon mic pre. But can you blame him for that?

That’s a hard one! We’re looking at the Focal Trios. We’d like to start mastering as well and are in need of a detailed and incredibly accurate set of monitors. 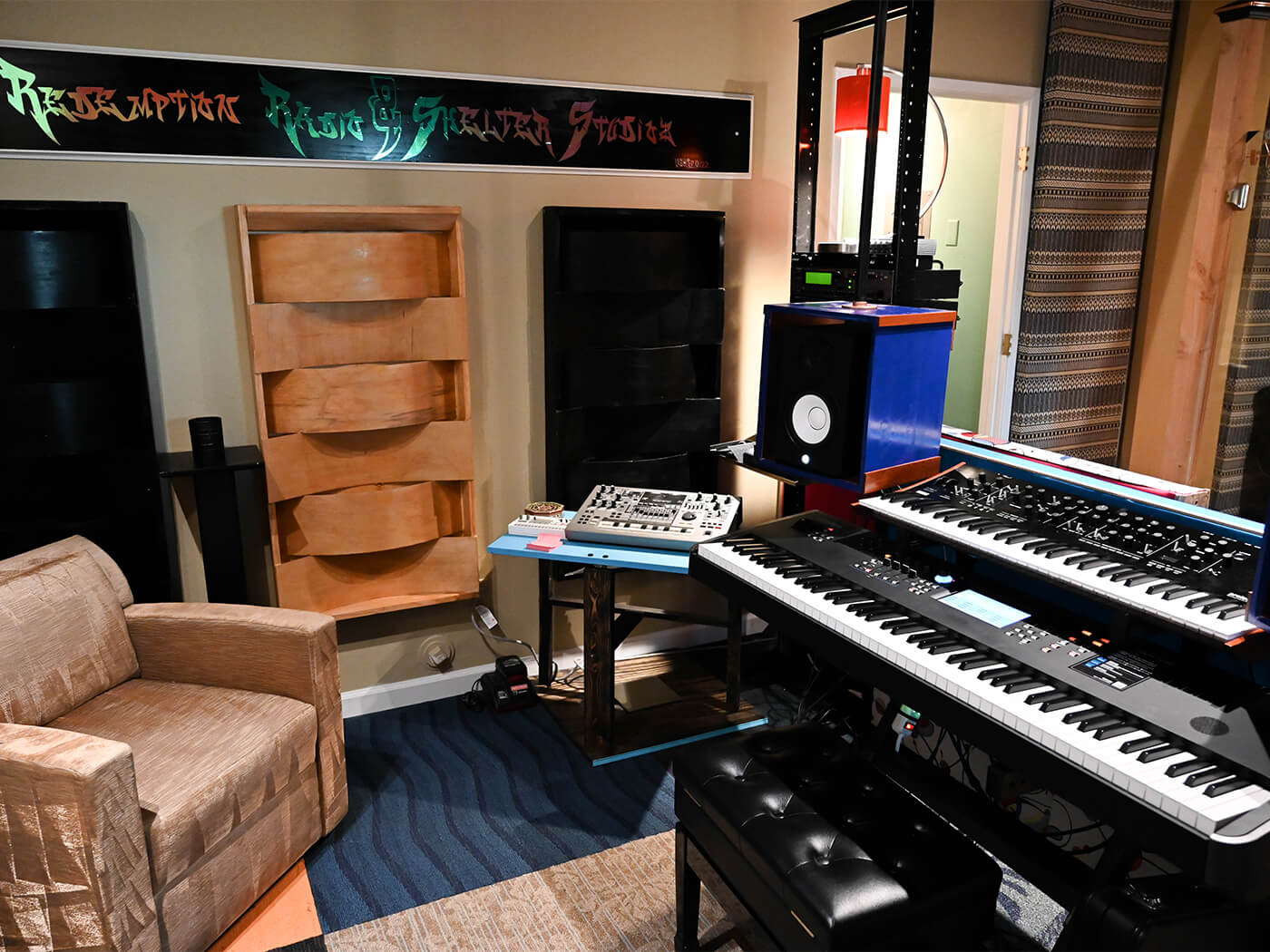 My dream piece of gear would be a 32 channel API board. Who doesn’t love boutique, warm analogue-sounding gear?

Stop trying to set a time limit to finish recording, mixing and mastering. You’re done when it sounds right, not before, not after.

You can absolutely do something really nice on a super tight budget and with almost no experience if you have a plan and Jesus on call. Aside from the equipment purchased, we built this place with $140 dollars a week, sometimes no money per week, two guys who knew nothing about construction, five kids, and a few friends with some knowledge who periodically stopped by. It’s totally doable if you’re willing to put in the time and develop a plan.