Show Off Your Studio: Per Hammar’s Berlin powerhouse is packed with unusual hardware

The Euromix, DirtyHands and 10YEARS founder dives deep into his favourite gear and explains how he keeps long passages of music interesting. 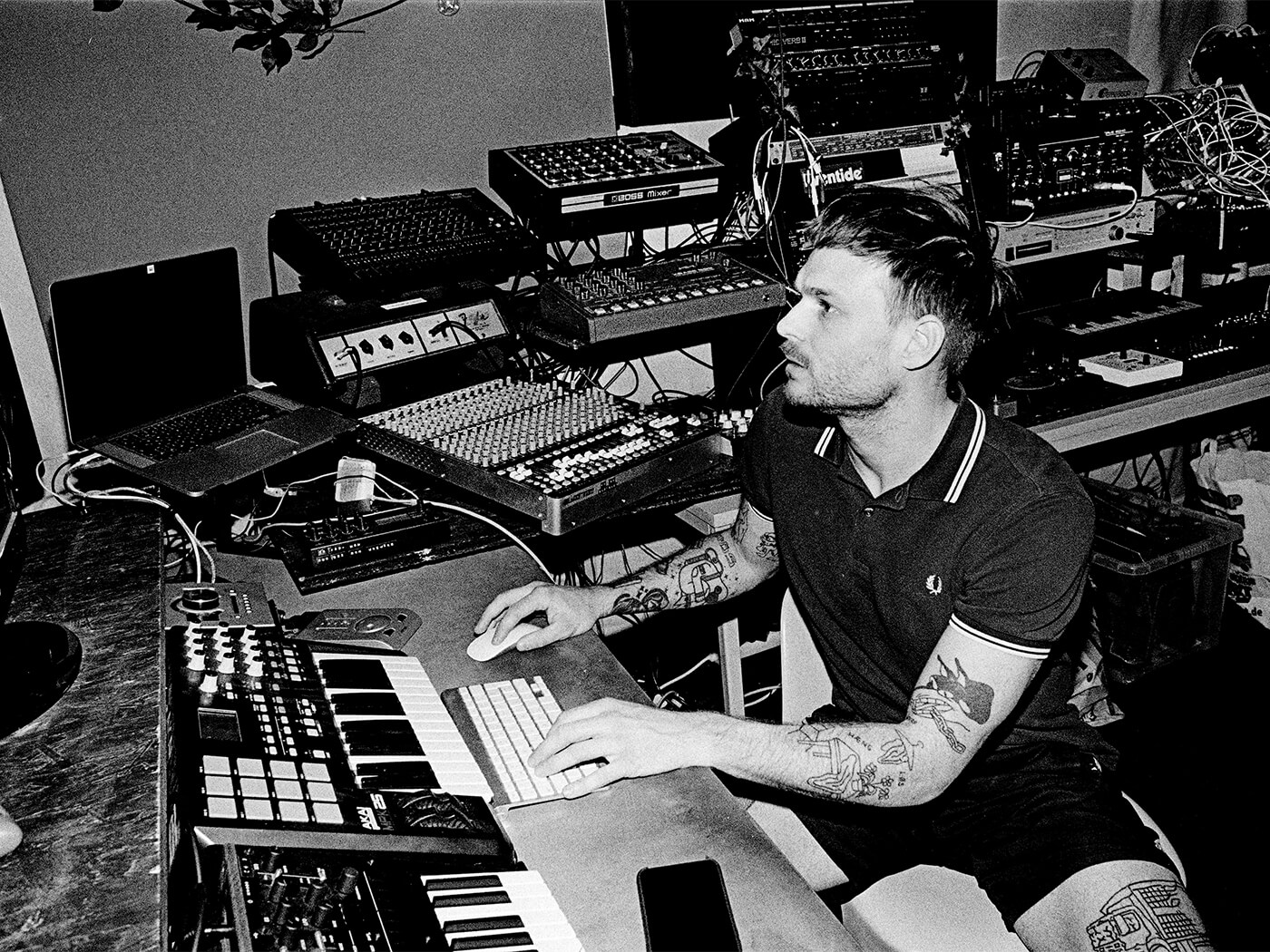 Per Hammar doesn’t seem to want to slow down. The prolific Swedish house and techno producer has founded three labels, Dirty Hands, 10YEARS and De Vloer, and has hosted the Malmö club night, Kiloton for 10 years. Per Hammar, recently teamed up with Patrick Siech to launch the Euromix mixing and mastering service where the duo promise to get creative and breathe soul into your mixes.

In the run-up to his next release, Na Zare with Olga Korol, Per Hammar invites us into his Berlin studio to talk about the gear that was vital in its creation. Learn why he has a soft spot for hardware digital synths, how he uses his modular rack and why he’s obsessed with a Soviet flanger. Plus, he and Patrick are giving away a free Ableton Live Effects Rack, which you can grab below. 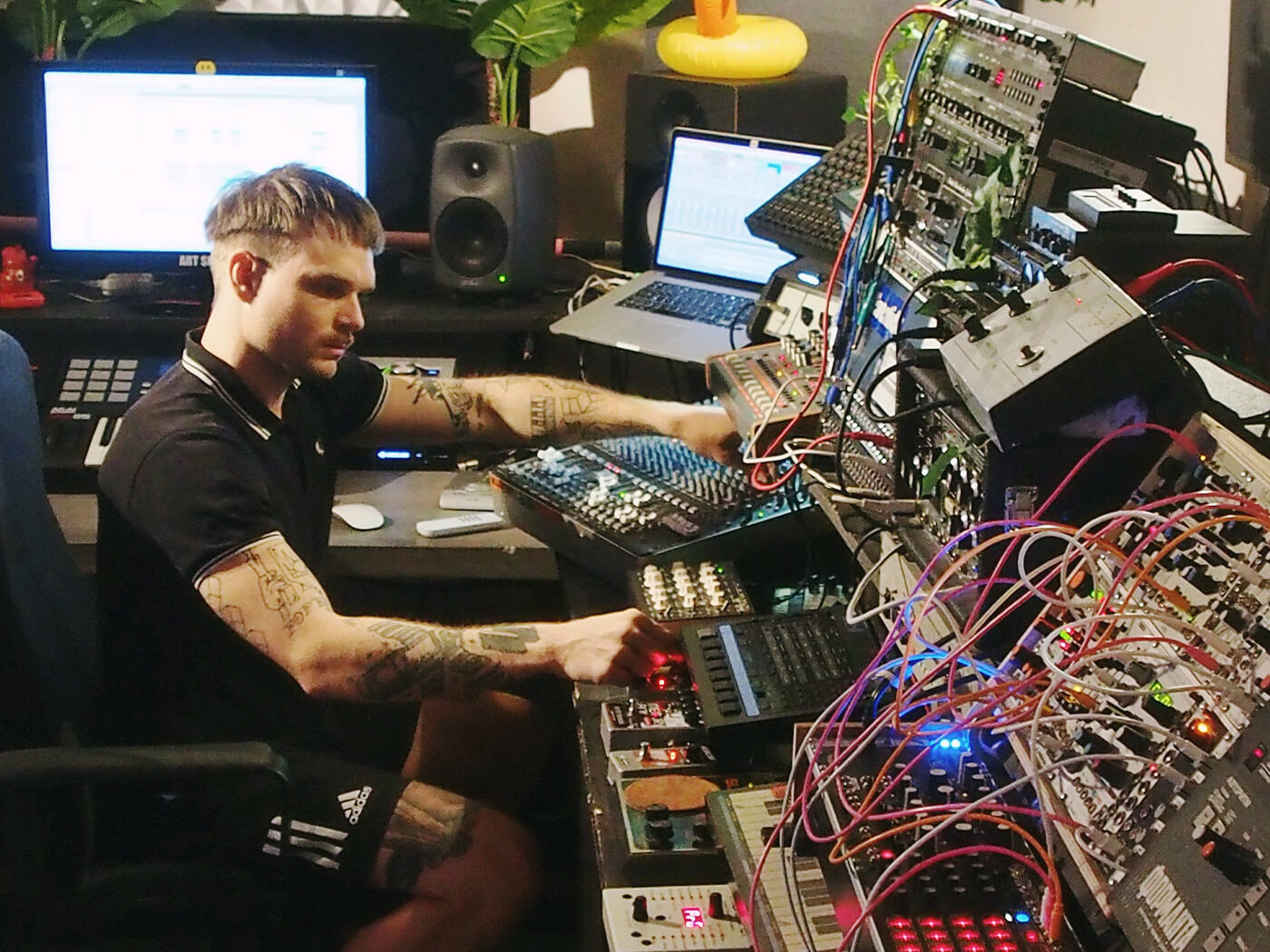 Tell us a bit about the studio, Per Hammar.

It’s located in Berlin and I moved in here one year ago after my old studio complex was sold and converted into a hotel. I want the studio to be flexible and hands-on. When I’m here, I want to work fast and easily get into the flow. My patchbays let me connect everything with everything within just a couple of seconds. I also work as a mixing and mastering engineer for Euromix, so the acoustics and setup are optimized to have the best mixing and mastering environment possible.

The studio is made to make music in all stages. From the first sketches and jams to a final master. It’s also optimized to mix in a reggae dub way – I’ve laid out the effect returns on all channels on the mixer. That way, I can use the desk as an instrument, rather than a summing board. 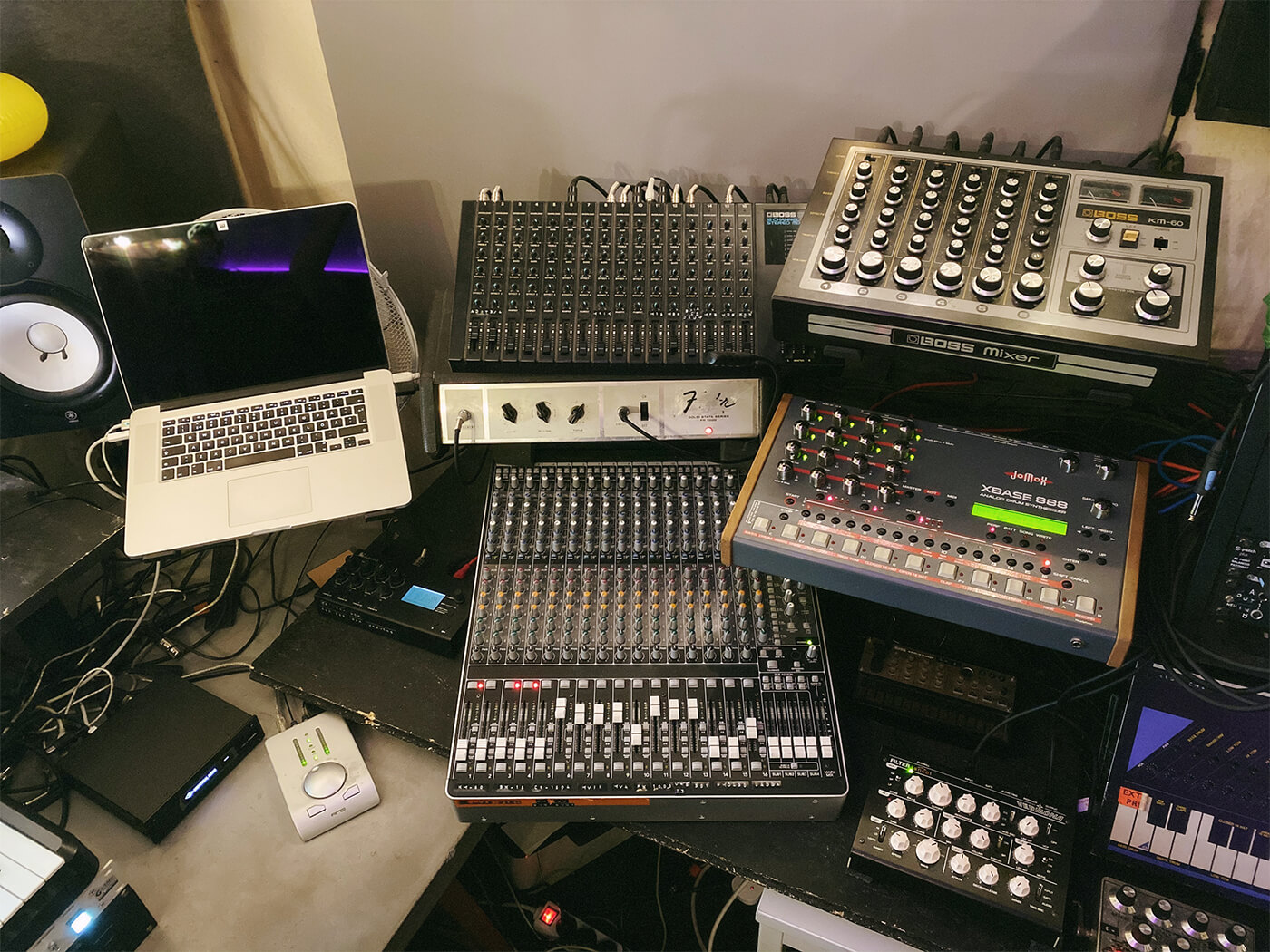 I’m delighted with the setup right now and I’ve realized that I need to produce in this room if I want to work seamlessly and achieve the sound I want. The thought of the minimalism of a laptop and headphones in an airport is getting further and further away.

I started in Propellerheads Reason in 2005 and, after a small detour in Logic Pro, I later found a home in Ableton Live, around 10 years ago – mostly because of the session view. It’s impossible to beat when it comes to jamming. It’s simple to send out sounds so I can lay them out on the mixer and mess around with them. Another great thing is the freedom it gives me to create my own effects and templates. For example, at Euromix, Patrick Siech and I are giving away free Ableton Live Effect Racks that we use when mixing and mastering for our clients. You can download the latest one here on Musictech.net!

Can you tell us a bit about your modular setup?

When building the modular, I already knew how I wanted to use it: to make complex, percussive and low-end sounds that evolve over time. I entered the modular world to take a step away from looping and unlock the ability to record rhythmic sounds that are interesting for seven or eight minutes. It’s easy to lose control over the development of the setup, so I decided to temporarily pause the hunt for new modules. Now, I can enjoy and play on it without it feeling incomplete. It’s nothing crazy in there, but I love the DPO and the Piston Honda. The Toppobrillo filter is pretty slick too. 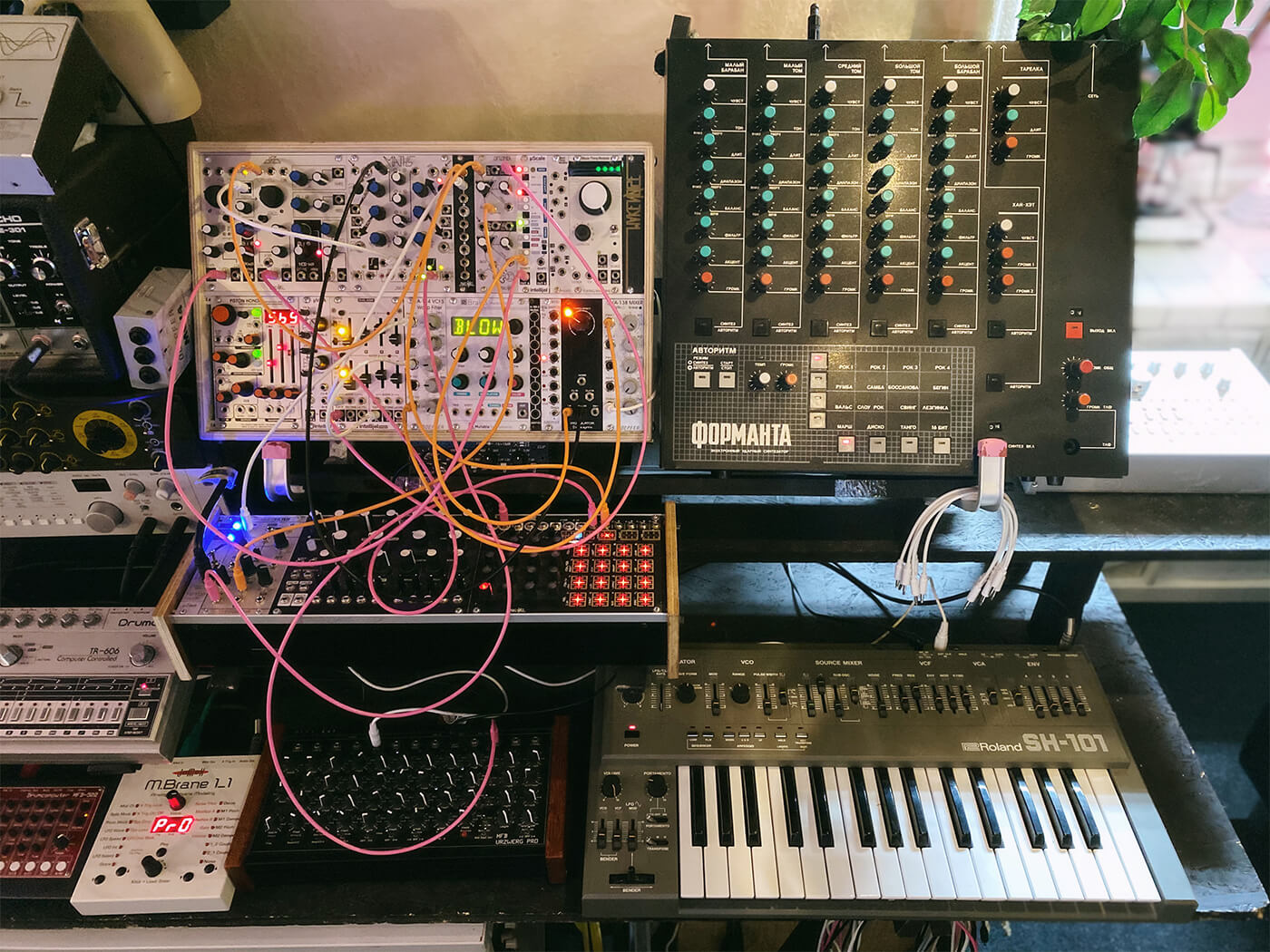 We notice you have a few pedals – what do you have in your rig and how do they get used in your production?

All effects, the pedals included, are hooked up to the patchbays and laid out on the mixer. I can connect them in serial or parallel, and use the send channels on the mixer to feed signal to them. At the moment, I’m completely in love with my Soviet flanger, Єлектроника ФЛ-01. Besides that, there’s a homemade delay/reverb pedal, a Small Stone phaser and a Memory Boy vibrato delay. In the rack, there’s a Dynachord VRS-23, a Midiverb 2 and Microverb 4. A forgotten piece of gear is the MAM RS-3, which is a dual notch filter. Next to that, a pretty fun rack: Zoom 1201.

You have a few digital synths such as the Poly800, DX27 and SY22. What drew you to these and over vintage analogue synths?

The retro analogue synth world never appealed to me. I don’t know why. I can identify myself with these guys here. They’re not overpriced and they’re robust. The Poly-800 has an analogue filter, although you have to deep dive into the menus to adjust it. However, I solved that with a simple mod. 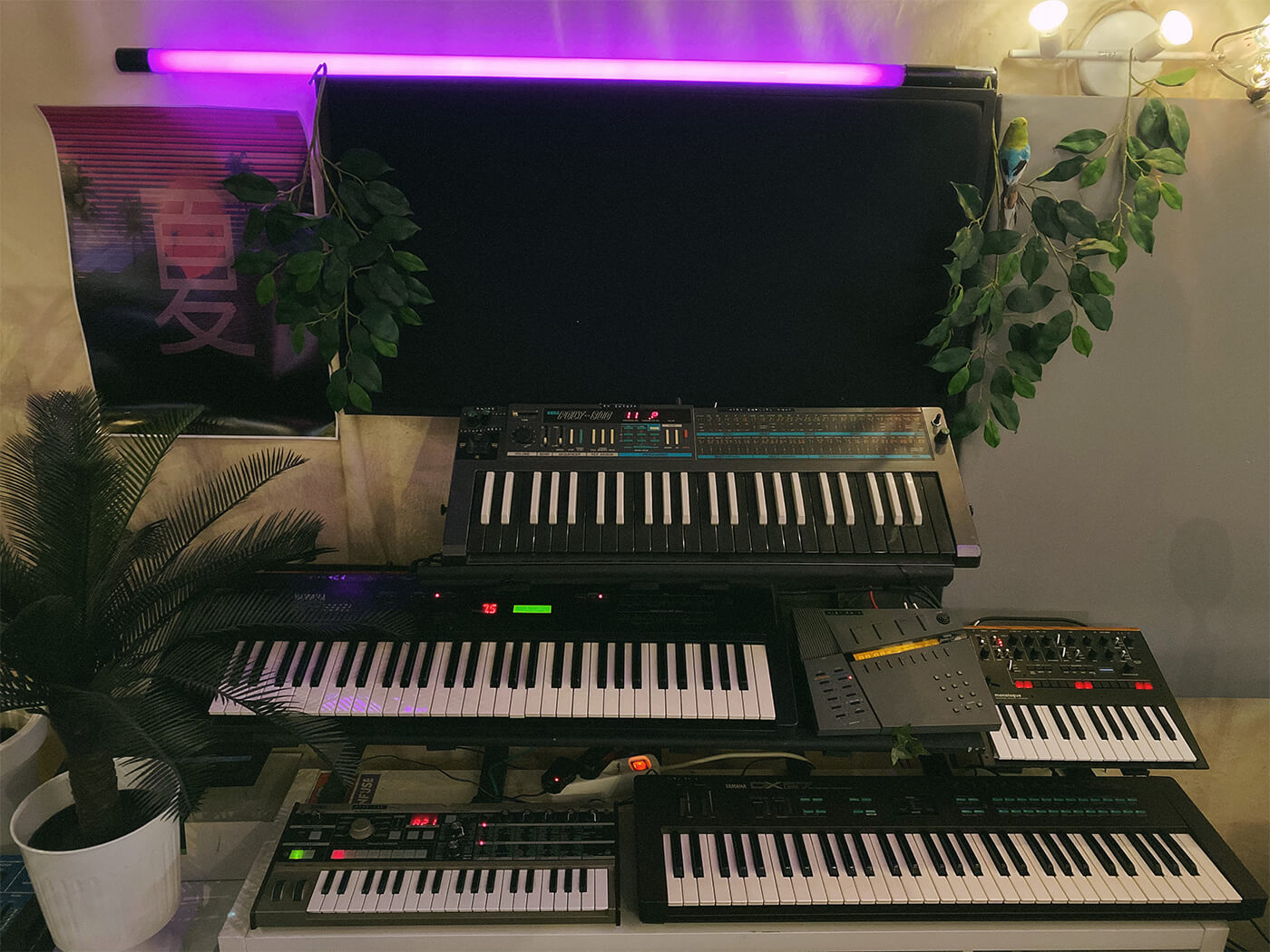 I usually trigger them with MIDI out from Live. After that, I treat them like all other sound sources and patch them into a filter and jam/dub them on the desk. Except for the Poly-800, which I like to play on, mostly because of its ravey Chord Memory function.

I’m abusing the Schippmann Ebbe und Flut. It creates things I didn’t think were possible until I heard it. I chose not to control it with CV, but simply let it live its own life. That’s why I love it. The warmth of the filtered sounds is unbelievable. It can sound so aggressive but at the same time, it’s like getting a gentle rub on my cheek. 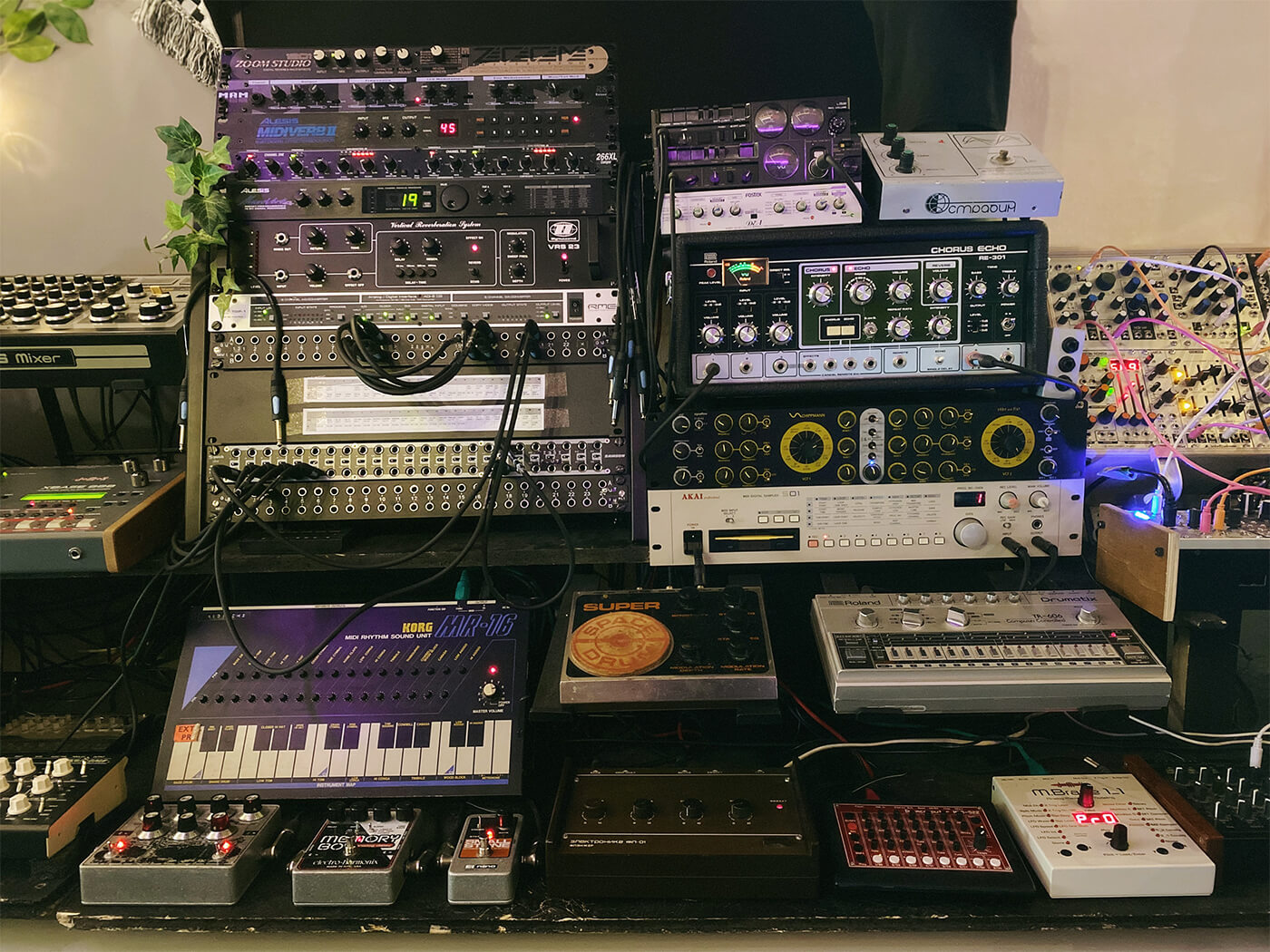 Another one is the Boss KM-60 mixer, which is the only machine that’s not an effect hooked up to the main mixer. I run all drums through it. The Jomox Xbase 888 and the TR-606 are hard patched in, but often I let the modular get a good chunk of the warmth and glue it gives. Sometimes, when I record something on it, you can hear a bit of the running 606 hi-hats leaking through the channels into the recording. It’s pretty charming, and often I keep it in the recording.

What synth or effect can be heard the most on your Na Zare EP?

When Olga Korol and I recorded the EP, Berlin was under a strict lockdown. I was in between two studios, so we hooked up some selected gear at home and locked the door. Olga found a new friend in the Yamaha TQ-5 and the modular system. On the title track, Na Zare, the KM-60 heated up the Jomox M.Brane, so we used that as part of the main hook. We recorded Olga’s voice through a Marantz PMD-222 tape recorder to get an interesting texture.

The Genelec 8330 APM/7350 APM sub with GLM, which is 100 per cent worth it. GLM is Genelec’s own built-in digital room measurement solution, which is incredible. You still have to treat your room properly, but this helps out with the last 20 per cent or so. It listens to your room and helps out with the placement of the speakers and sub, plus cutout peaks in the sounds spectrum where your room causes the sound waves to collide. It’s quite remarkable how flat the sound has gotten and how simple it was.

This is a piece of gear that I don’t own (yet), and that’s Little Sound DJ, which is a music production tracker for Gameboy. Early computer game music was why I got into electronic music and LSDJ was the DAW behind many of the tunes I listened to. Although I jumped straight into Reason when I started with production, I always dreamt of an original copy of the cassette. And it sounds like a perfect opportunity to spend some time to work on the skill to make music on a Gameboy. Bring batteries!

I built a few studios over the course of 15 years and collected some knowledge in that time. But my best friend and colleague Patrick, that I run Euromix with, is an acoustics pro. He helped me out a lot. Then my other buddy, Niall Prescott from Kiss My Ears, came over and built it. Much respect to both of these gentlemen. 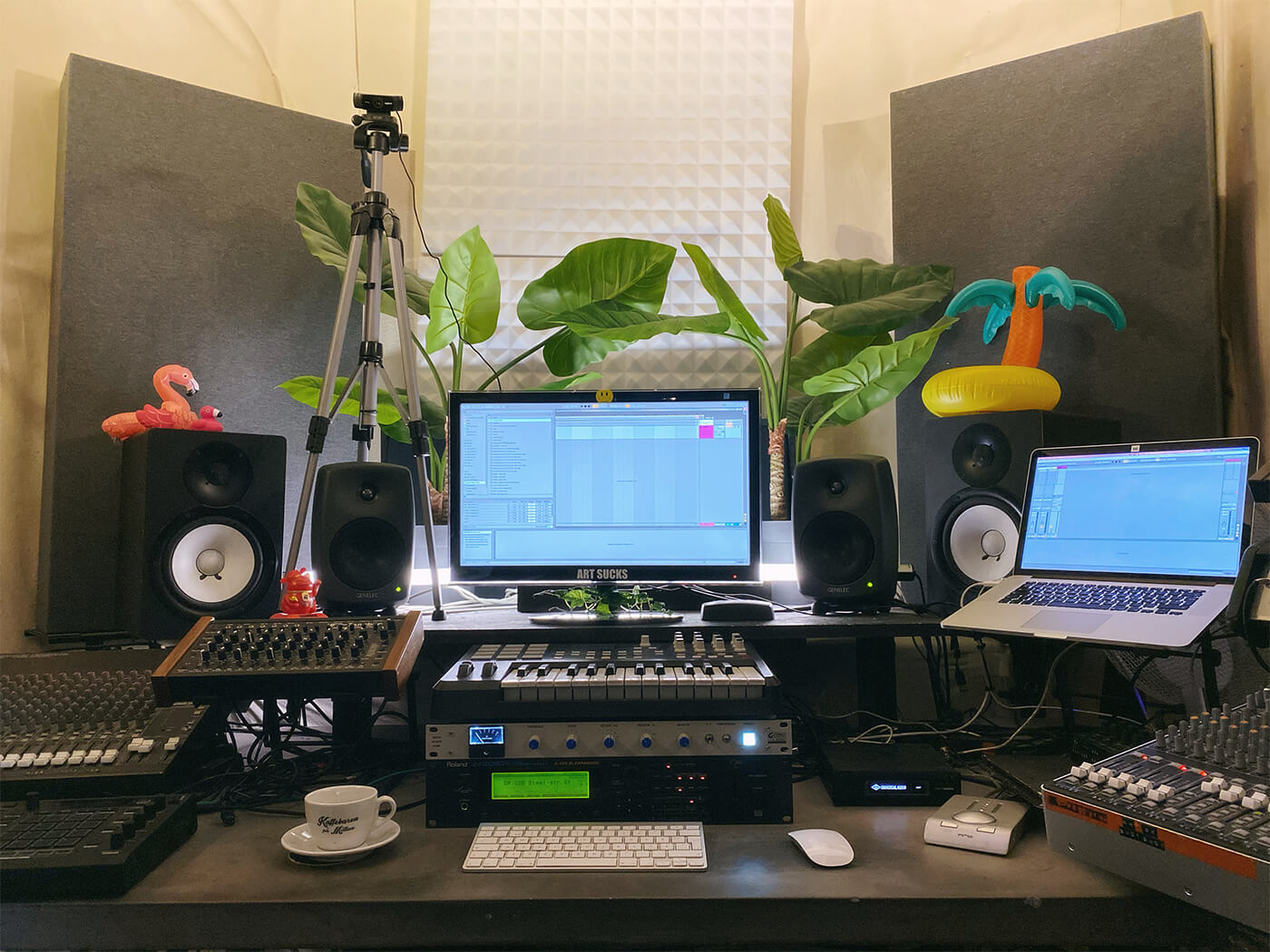 I just picked up my dream desk, the Studer 169, and installed it today. I’ve been dreaming of this desk for years and, finally, the dream came true. I’ll be recording everything and making mixdowns with it. It glues together everything I run through it and, with a bit of EQ, it blows open a mix. At the same time, it clarifies the different sounds and somehow injects a bit of space. 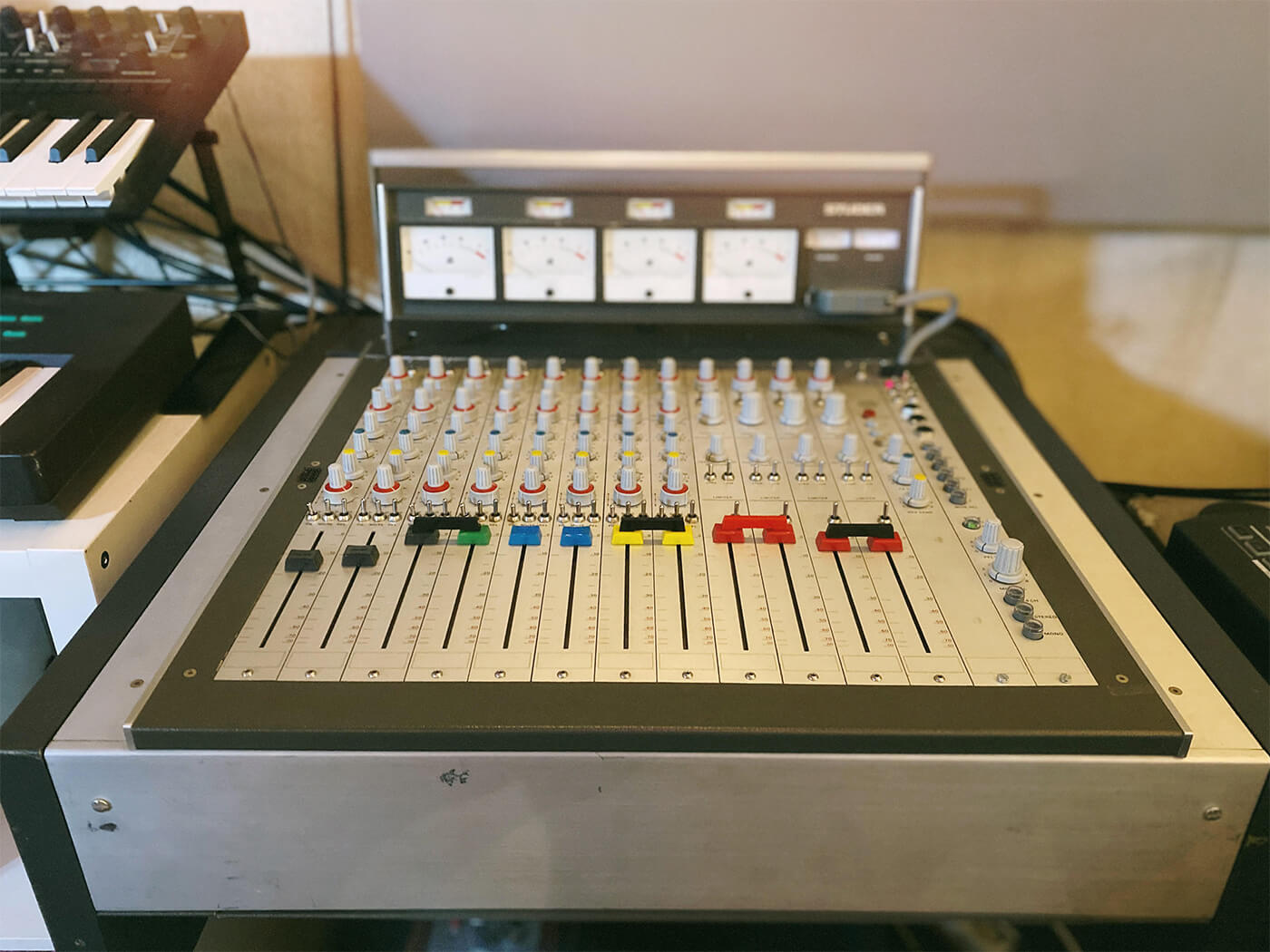 With old fragile gear, a part of the game is that you have to get it serviced a lot. There’s almost always something that doesn’t work. A button I might have to click on 10 times before something happens; a machine that suddenly runs a power shortage or just glitchy connectors. It’s a bit of a headache when I’m in the flow and have to start troubleshooting.

Find something that makes your production fun and try not to care about the end result. Don’t spend too much time jumping on hypes and advice on what sounds good. If you find some gear that makes the process fun and inspiring, the results will come.

Try to get the sound right before you move in. You can buy a pair of high-end speakers and your finished tracks will still sound strange if the acoustic isn’t right. Do some research or get someone to make it right. Make measurements and correctly place the speakers. Get the bass traps and in and treatments in before the gear. It’s a headache saver.