We find out how the revered DJ and producer gets inspiration and why the pandemic has made him get more serious about producing. 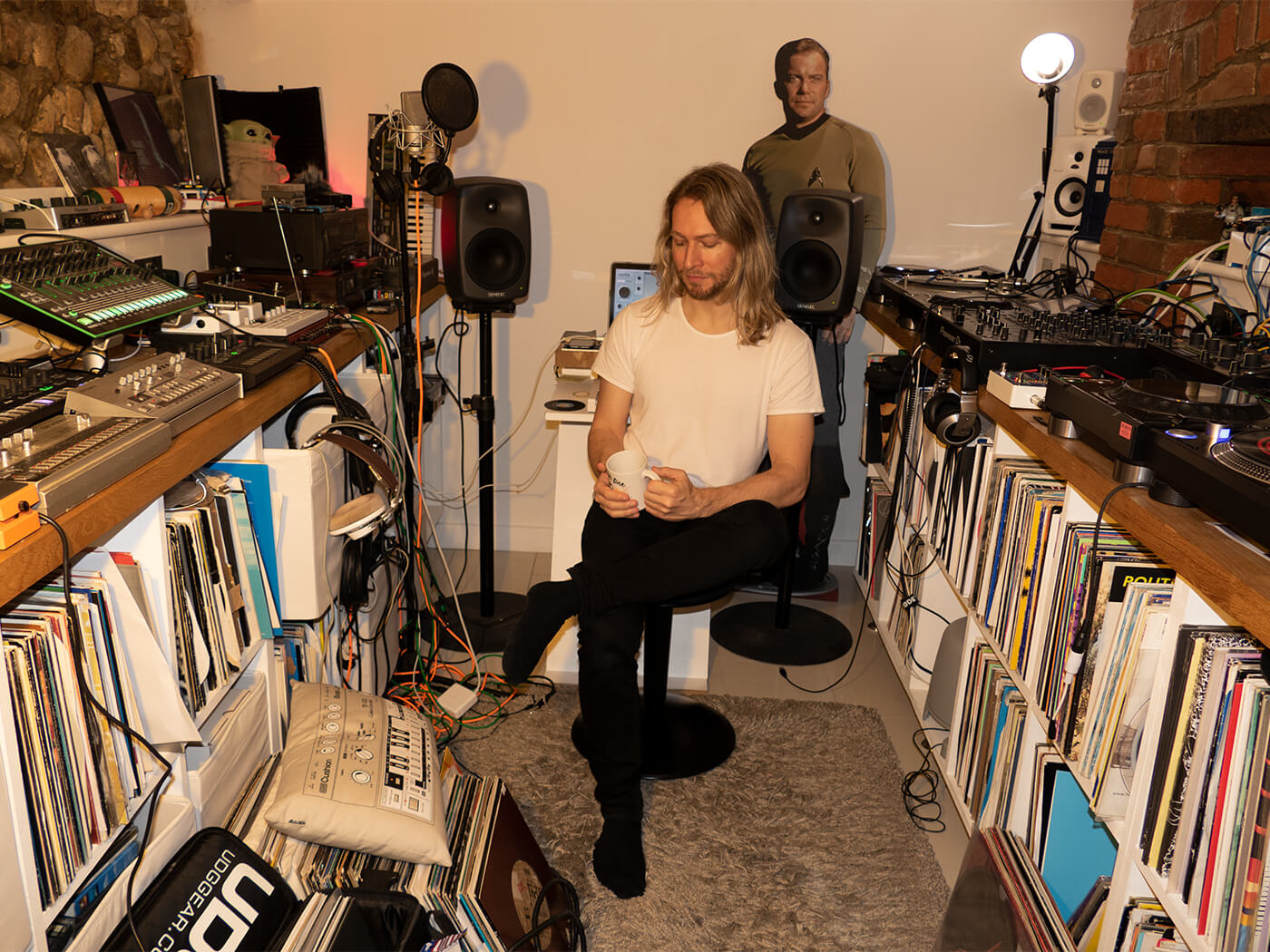 British DJ and producer James Zabiela is renowned for his deck-spinning wizardry and supremely creative mixing techniques. Thanks to his mastery of the CDJ, Pioneer DJ recruited him to take upcoming products on a test drive and advise the brand on how to improve. With the recent release of the CDJ 3000, we were keen to find out how James uses the new flagship deck and how his studio space has allowed him to flex his musical muscles during lockdown. 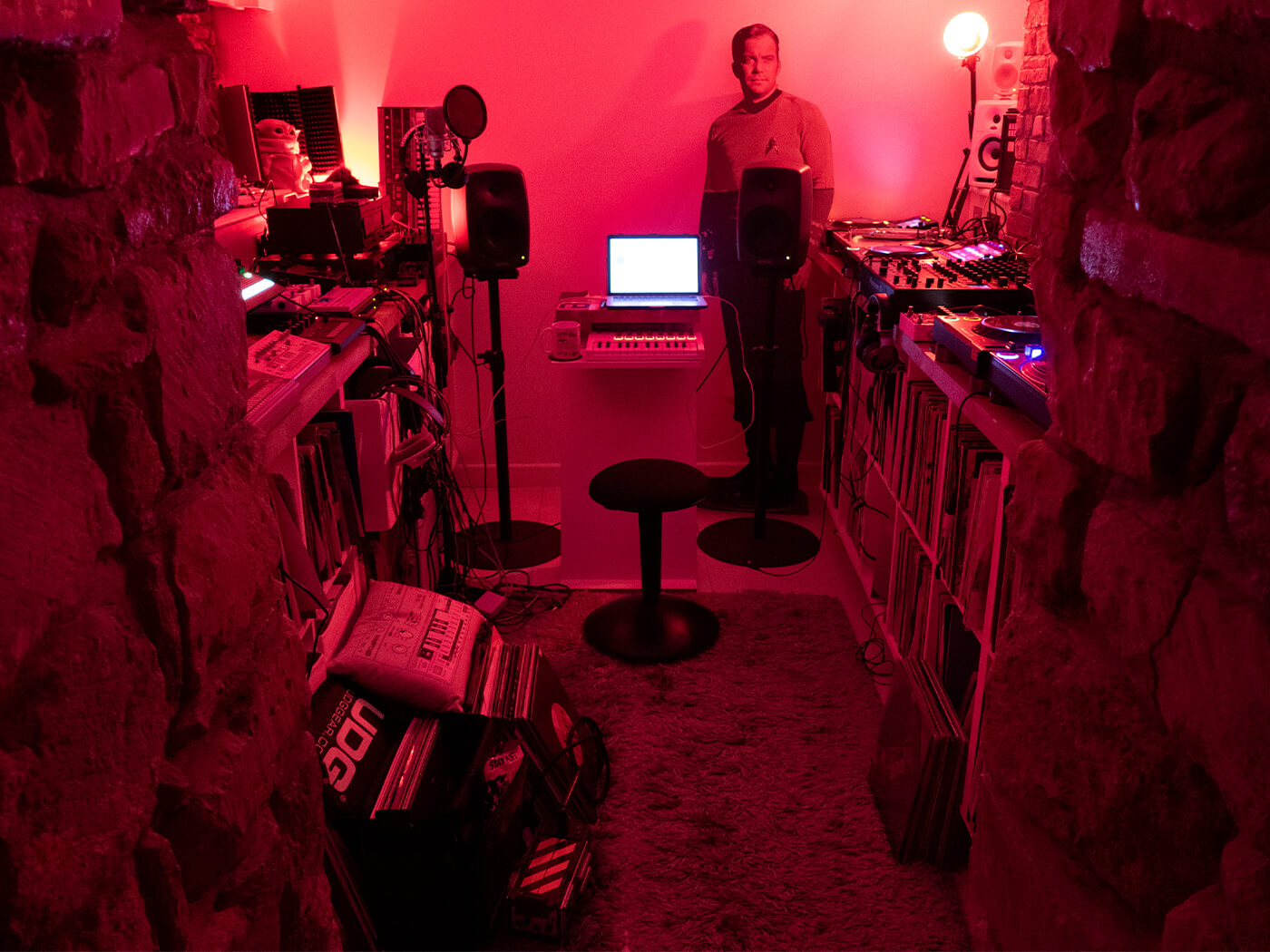 Tell us a bit about the studio, James.

My studio is in a medieval basement in Southampton, the dwelling of which dates back to 1300. It was the main reason I was sold into this house – somewhere I could make noise without annoying neighbours or anyone else I’d be living with. It’s definitely haunted. The basement is split into two rooms but my music stuff is mostly in the smaller room pictured which houses all my studio toys down one side and my DJ’ing stuff along the other side, although now the two sides are blurring together. When I need a break, I’ll go and sit in the other half of the space and watch some Star Trek for a bit. Captain Kirk, AKA William Flatner, usually resides in this part of the room, but he insisted on being in the shoot. 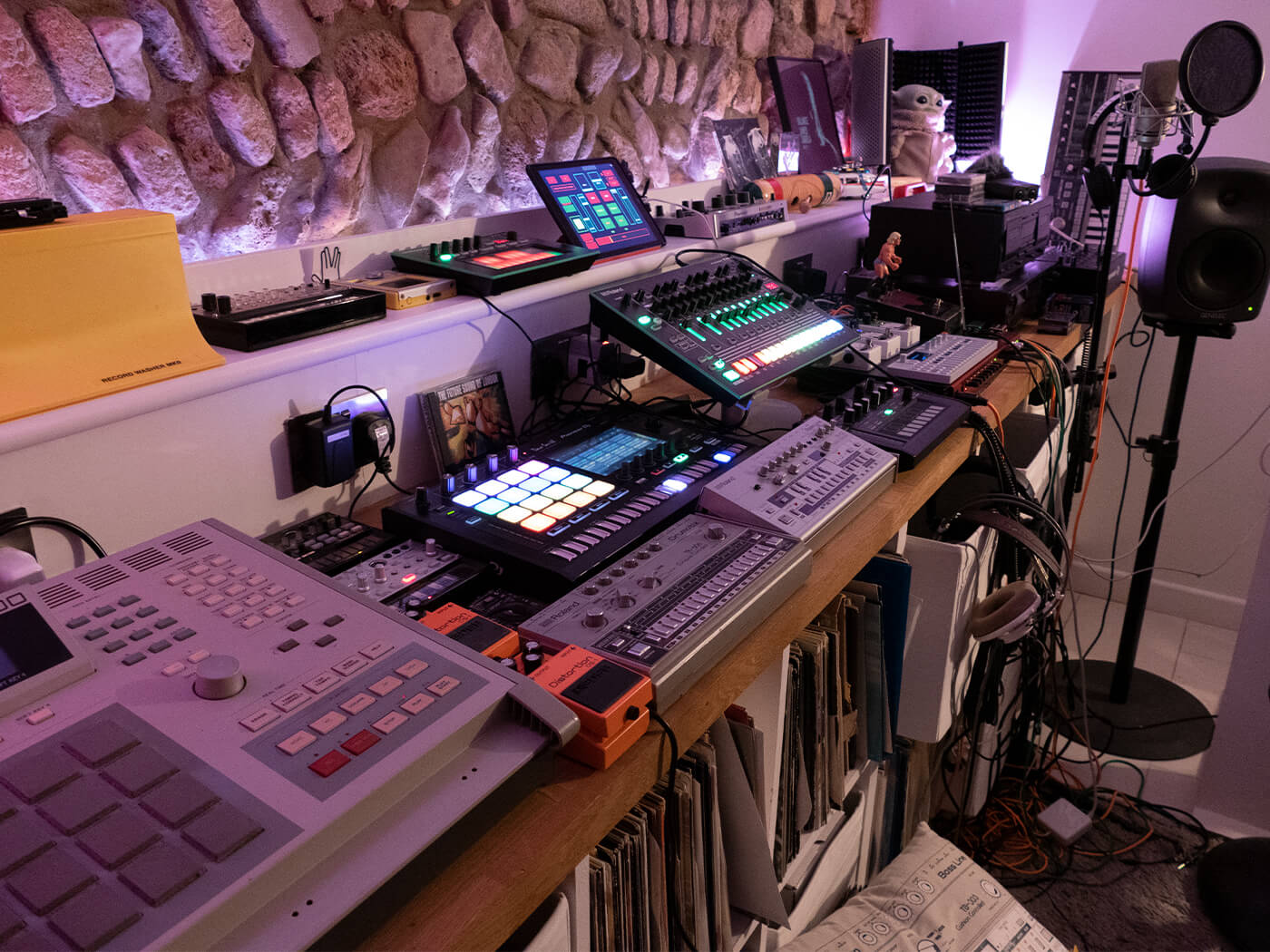 Until this year, the little time that I did spend working on music would mostly be above ground, and sometimes 40,000 feet above ground. In fact, after I moved into this place I never really warmed to the basement room, hence the many portable items such as the Korg Volcas that I could always take to another space for inspiration – plus, for coffee and sunlight. However, this year I’ve come to fall in love with it after having made some home improvements down there. It’s been a kind of refuge during the apocalypse. 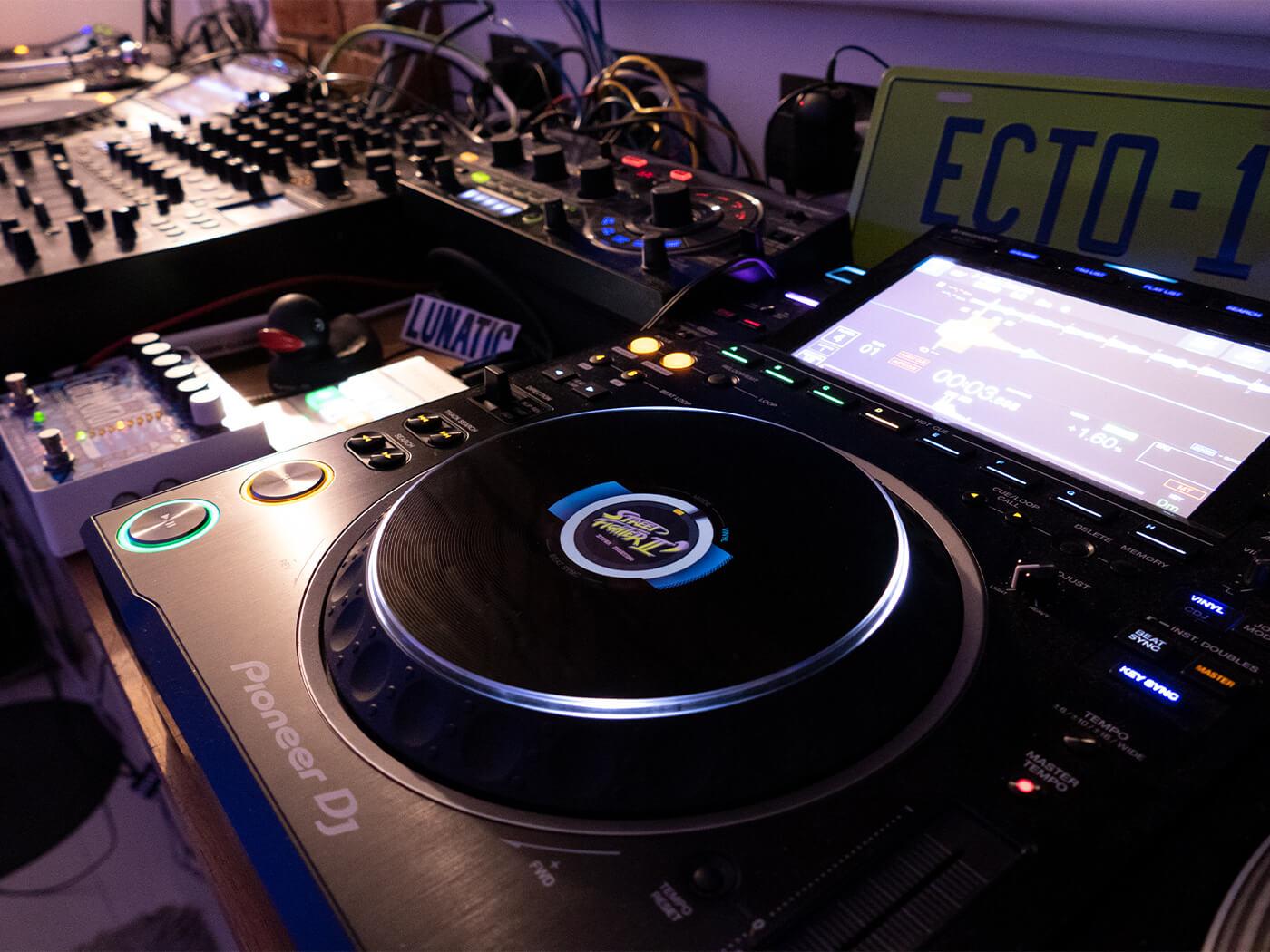 Ableton Live. I have a live setup that sometimes accompanies my DJ’ing and so it makes the most sense on that level and I sometimes make my mixes in it. It seemed like the most natural thing for me to use coming from a DJ background. I like that It’s easy to bus and route audio around fairly intuitively, bounce and rebounce into new clips and resampling. Session View is a great place to try and work things out before flipping over to arrange stuff. In the past, and even now, I’d struggle with the discipline of leaving the fun of Session View behind in order to get knuckling down to do some arrangement. But I’m sure I would procrastinate somehow regardless of the DAW. Session View can be conducive to reaching that flow state. Just recording ideas into clips. I’ve done some of my best (and worst) work there. 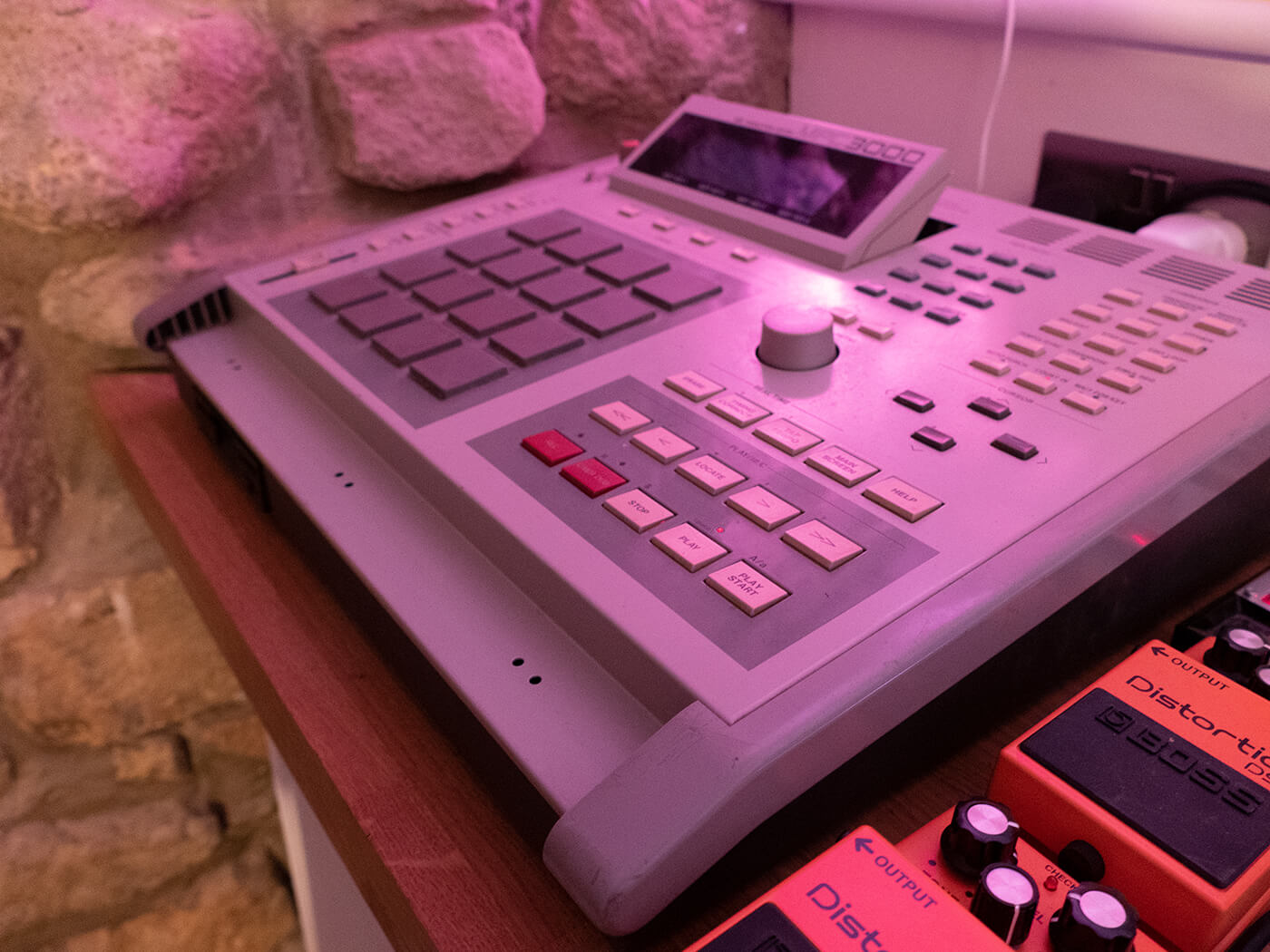 How does Pioneer DJ’s equipment provide you with the tools for a more creative DJ set?

Pioneer DJ equipment is designed to be intuitive to use and it is. The company walks a great balance of robust usability without overcomplicating its equipment and software with too many options. And that, of course, can also force you to be more creative in itself. I used to try and hassle the team to add as many bells and whistles onto their products that I could think of but I realise now this would be a mistake both for them and certainly for me, as I need to be reigned in. I need constraints as a user, whether that’s with DJ’ing or using a synth or sampler. If I’m presented with endless possibilities I find I have to try them all. It’s a character flaw in many aspects of my life I wish I could change!

I know it’s been in Rekordbox for a while, but now having the key shift and key sync on the actual hardware is great as I enjoy harmonic mixing and creating mashups. The quality of the algorithm is really decent. You could easily pull off a convincing acapella over a track in an incompatible key by shifting it. I love the odd loop length options for creating polyrhythms and it can allow for some drastic tempo jumps, like from house to drum ‘n’ bass via the way of short loops. This will be particularly fun to pull off when we can get back out on the road. Lastly, I know it might sound kind of tame, but the platter is quite lovely. It has to be spun to be believed. It’s really a step up from the previous models. Combine that with a large zoomed-in waveform of a sample and you can really see exactly what you’re scratching. A visual aid. 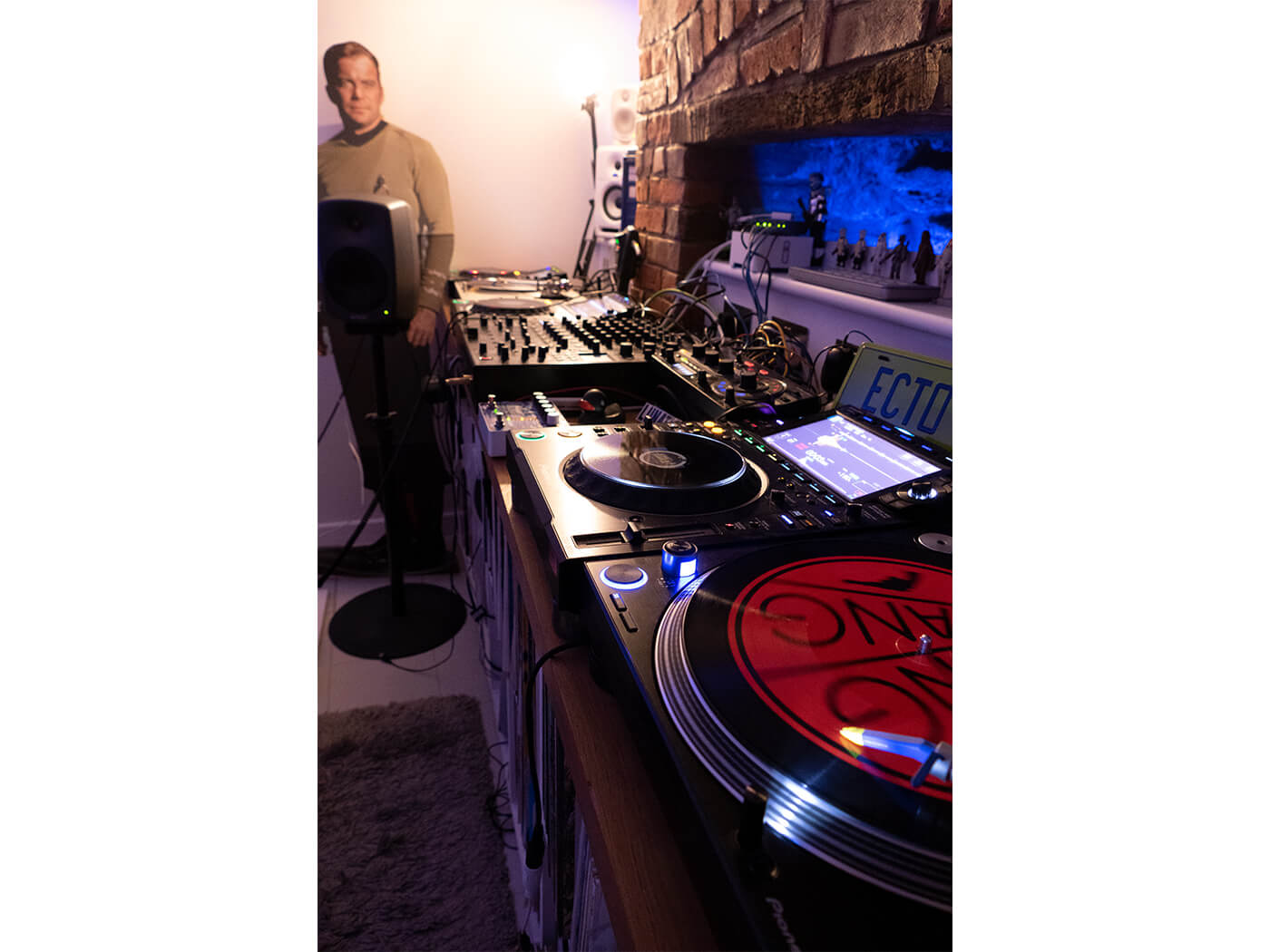 Regarding the mixers, I would play a bit differently on each. I know the Nexus 2 inside out, so it’s probably natural that I’m currently drawn to the V10’s many send and return capabilities. The delays are great and you could use three channels just for effects returns, all intertwining and being sent all over the place and another three for your decks, for example. Right now I’m doing just that with Cathedral Reverb, the RMX and this Timetosser prototype from Alter.Audio. It’s worth noting that it isn’t the finished product in the photo.

A few weeks ago, I put a Genelec Subwoofer right below the mixer and now it almost sounds like a club DJ Booth down there. I have a Phillips Hue lighting setup that I can control with my phone and there are some third-party apps that can react to the sound using your iPhone’s mic input. I haven’t really put that to the test yet and I’m sure there’d be some noticeable latency. Most importantly for me, though, is that because it’s a basement with only one small window in the adjoining room, I tend to use the energise setting on the Hue desk lamp that you can see in the photos for a bit of a boost which I maintain really helps me from feeling a bit “ugh”. 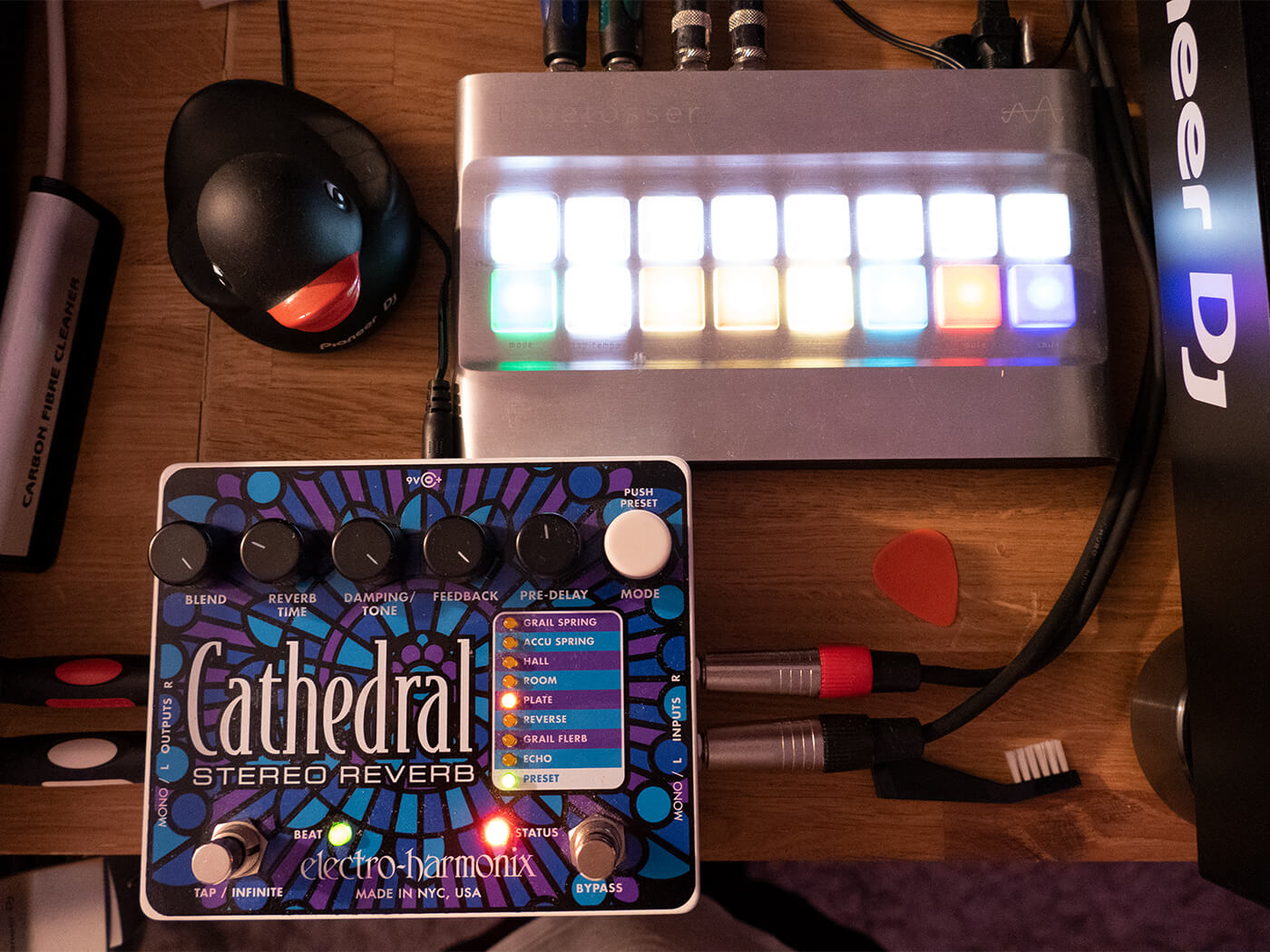 Do track ideas start at the decks/DJS-1000/effects or using the laptop and a DAW?

Sometimes, more often than not, I’m messing around with a sample on something and take it from there. The CDJs are basically samplers now. If I’m at the DAW too much I get uninspired, I have to play with some toys to get a vibe going and my studio is more of a toy room than a studio, as you can see. So I might run the TE OP-1 through a pedal or send something through the analogue filter in the MPC or the ace filter section in the SP16. I fetched an old cassette deck down from the attic that, amazingly, still works and imparts a crap, but nice sound to anything recorded to it. Sequencing drum loops is something else I prefer to do out of the box, even if I replace the sounds later. 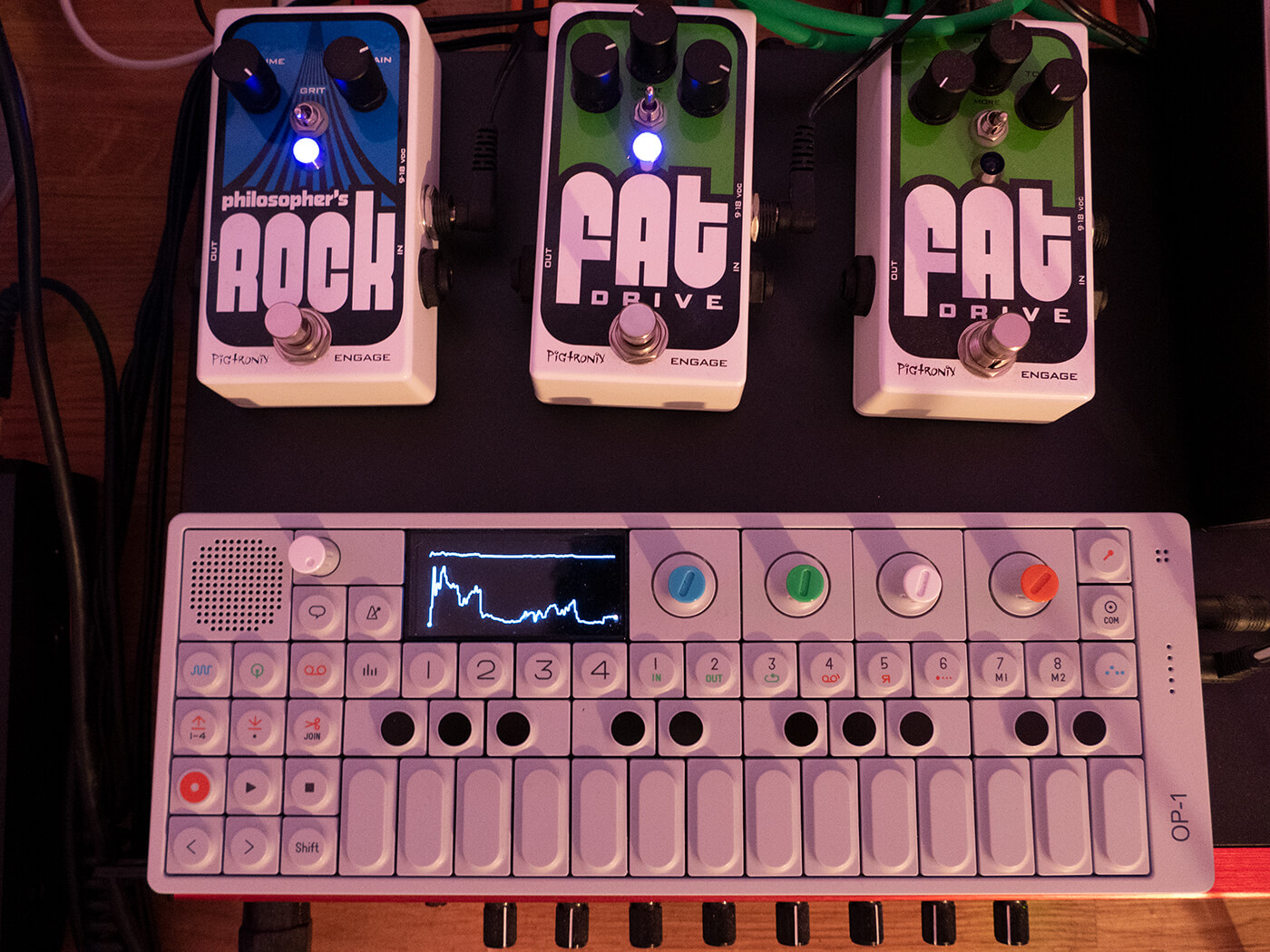 Teenage Engineering’s OP-1 is my go-to gadget for fun. It has limitations, which I need, and yet I always find something new to do with it. It’s great for getting down an initial idea and you have everything there to come up with a musical idea, plus find a few happy accidents along the way before you look at your DAW. It has an FM-style synth engine on it and it has FM radio. I did a remix recently that sampled a bit of the Jeremy Vine show through its FM antenna. Don’t tell the BBC. I’m also a sucker for it’s quirkiness and design, the colours remind me of the old Super Nintendo PAL version!

The life-size cardboard cutout of Captain Kirk, obviously. Totally worth it. 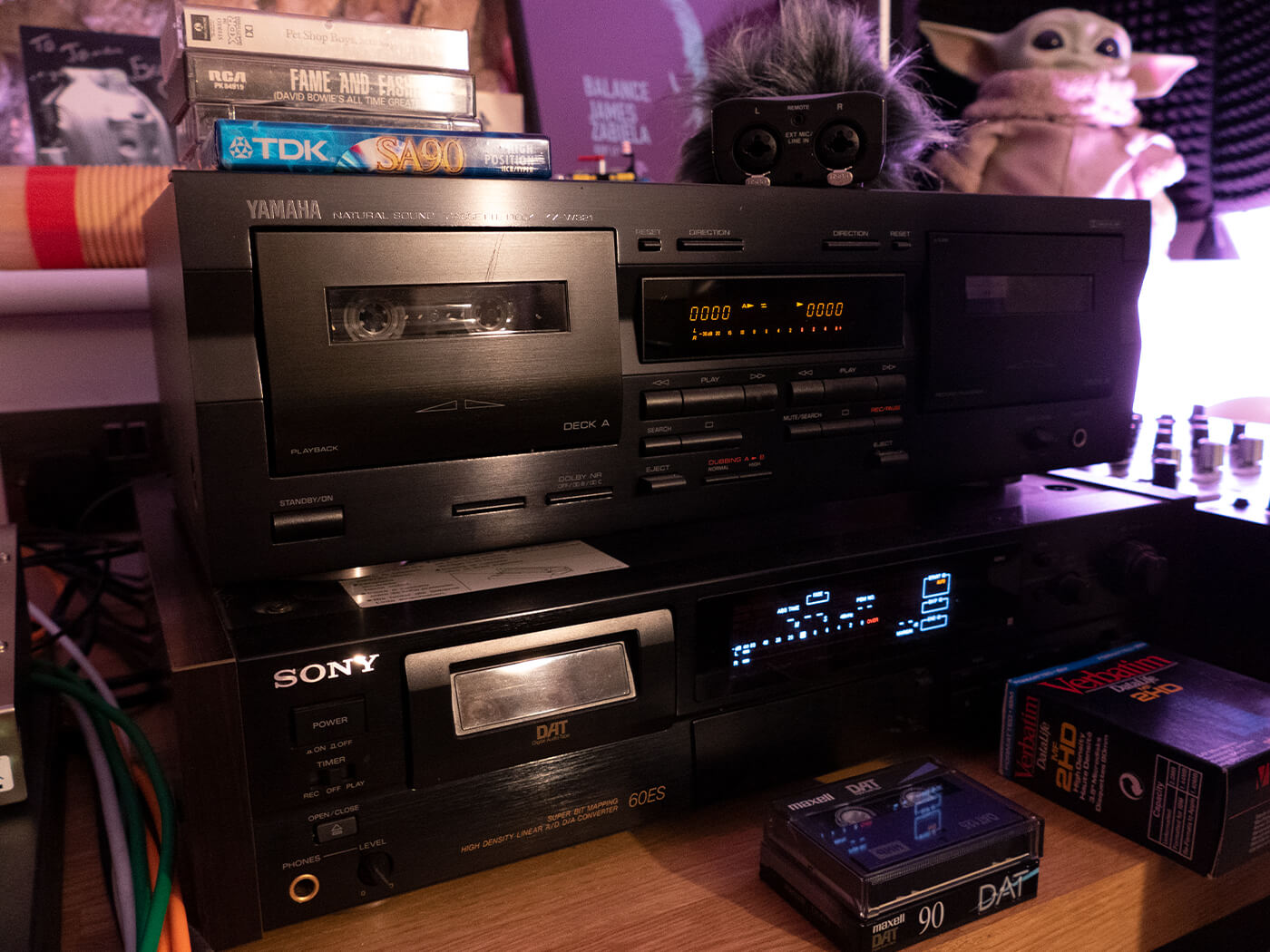 I haven’t, apart from positioning my monitors in the best place possible and ditching my chair which gave reflections off the headrest. The next step is to get in some acoustic panels to deal with some of the reflection points, the ceiling is also quite low as you’d imagine so that’s another issue. Thankfully, I have various monitoring options all around the house and many pairs of headphones. Plus, with tools such as Izotope’s Tonal Balance Control 2, I can virtually see my way into the ballpark of a satisfying mix by combining all of those things (and bouncing like 20 versions of a track). It would obviously be nice to just be able to hear off the bat more truthfully.

I’ve been demoing Oeksound Soothe 2 for the second time, and I think now I’m going to have to buy it.

A Prophet 05 would be a dream. Heck, I’d even take one of those new wonky ones with the wrong capacitors in.

I never invested in my room acoustics as I always just saw myself as a travelling DJ and not a producer. Now that I’ve been at home for a year, I realise how important it is to actually hear what the heck you’re doing and it can be bloody frustrating when you can’t because of your room. A positive to come from the pandemic is that it’s made me take my music production more seriously. 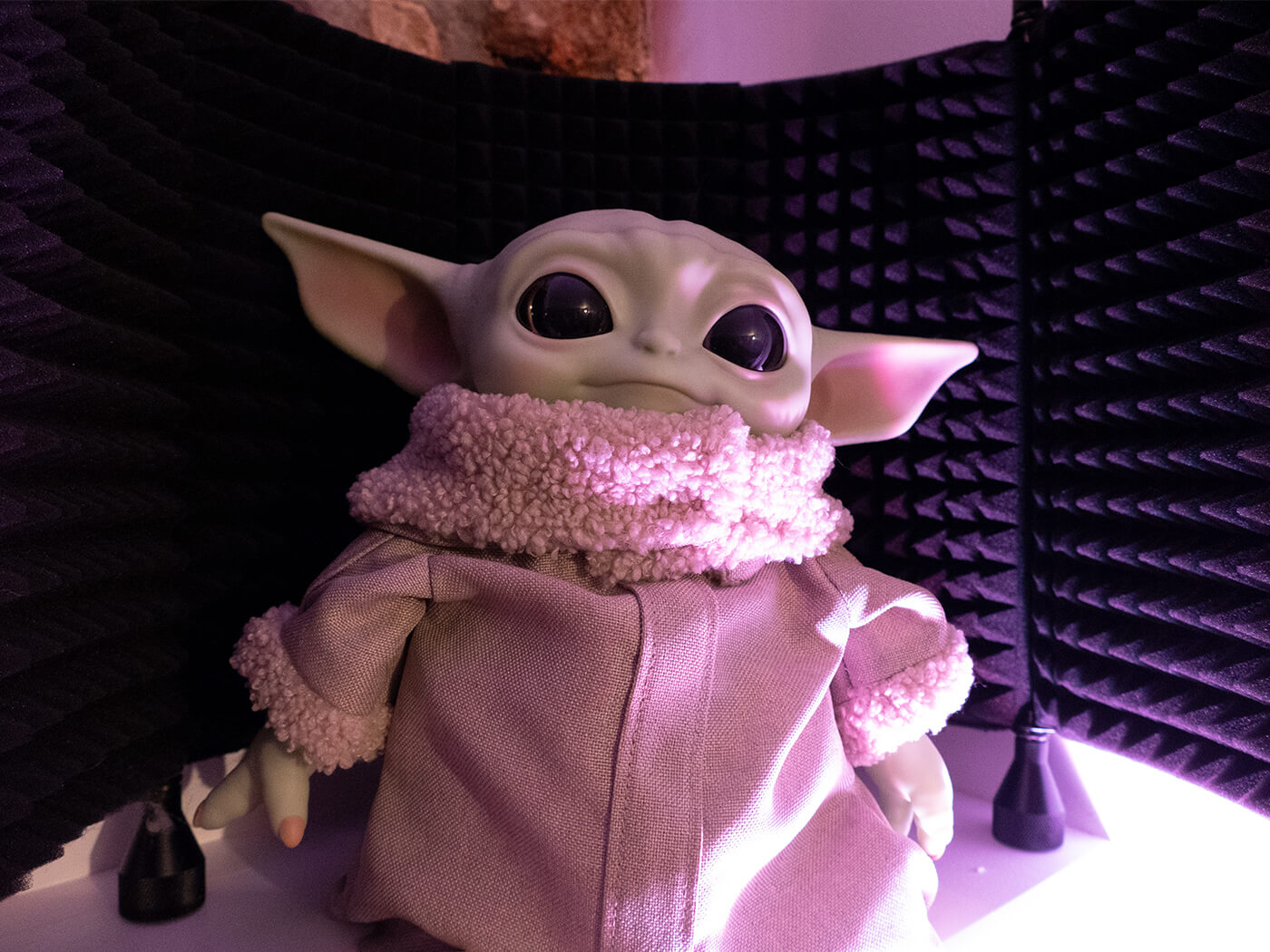 We’ve seen an uptick in live-streamed sets this year – do you think these should continue post-pandemic as part of a DJ’s regular career?

I have been asked to do some live streams and I just haven’t been in the right headspace to do them. Once everyone is travelling around DJ’ing again, I’ll probably want to stay at home and do streams. Personally, I’m more interested in continuing to grow my skills as a producer at the moment and, amongst the panic and armageddon of 2020, this has been a great opportunity for me to learn.

I’m probably the wrong person to ask, but if you’re like me and get bamboozled by all the different directions your arrangement can take, try this technique that I’ve found useful. First, block in all of the sounds of your working loop into the arrangement for the estimated length of your track and then deactivate all your audio and MIDI clips. Then, start your arrangement by turning them on one by one as you progress forward. All your sounds are there and being able to quickly audition the combination of sounds is useful. For me, I find it also aids me from feeling overwhelmed and can help prevent me from layering too many sounds unnecessarily. 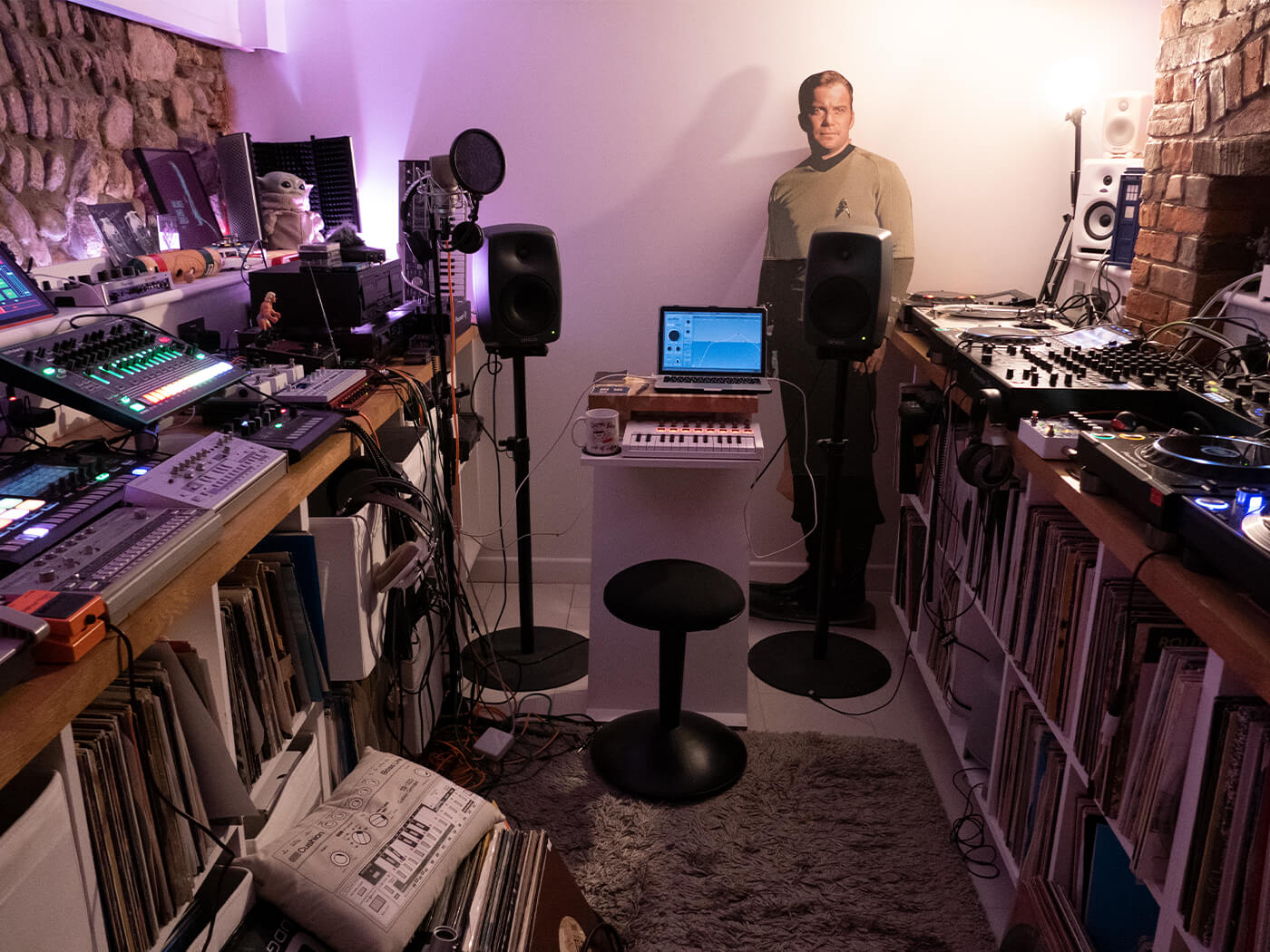 Get decent monitors before anything else, then do something with the room so you can actually hear them properly. At that point, your studio is built and everything else is just extra. Also, don’t buy MIDI packs from Youtube. “You want a beautiful melody? I got you”. Nah, I’m good, ta.