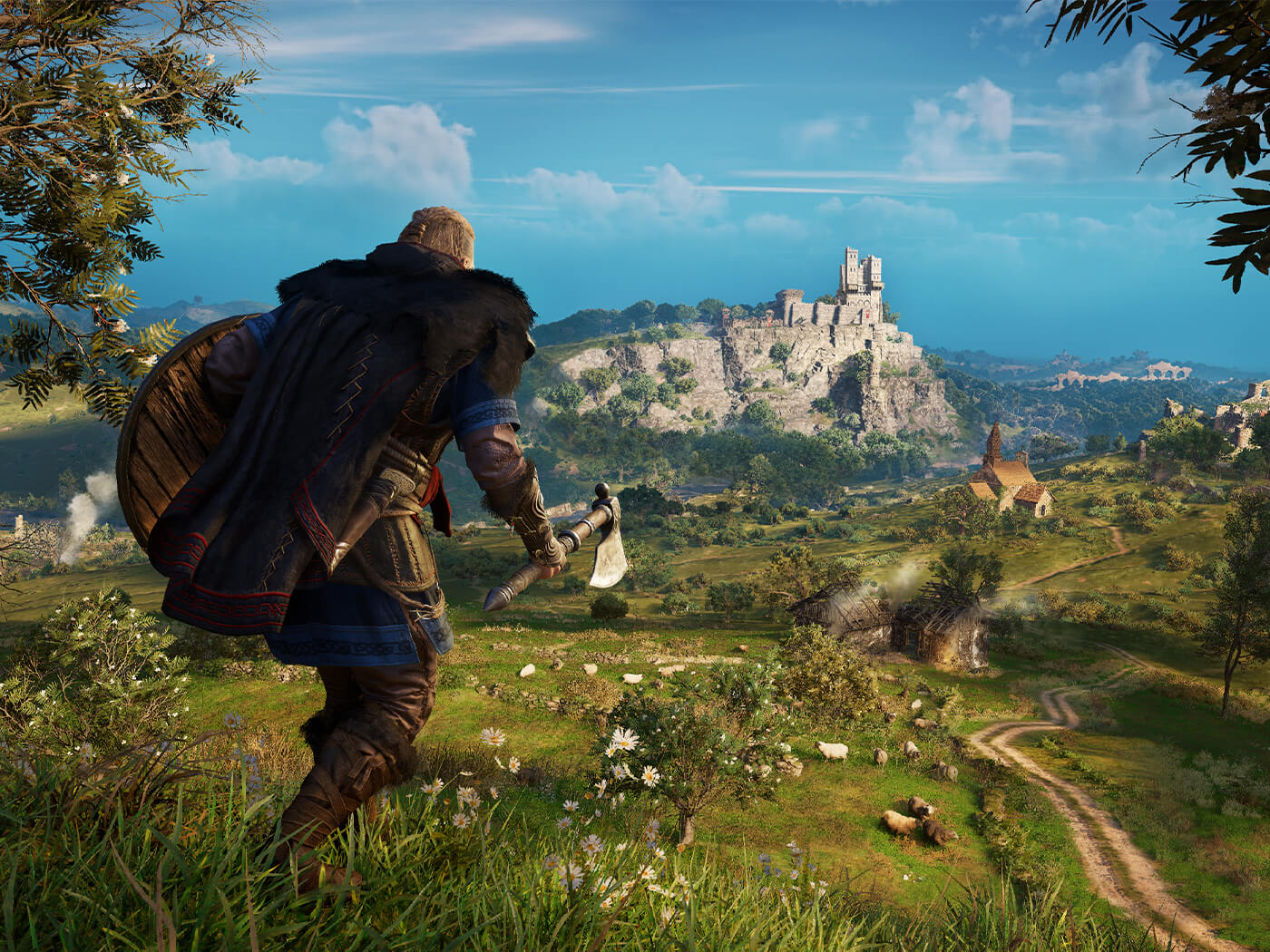 When striving for reinvention, it pays to look not just to the future but to the past – and there’s always been more to Assassin’s Creed than its eclectic historical settings. Music has always played an integral role in bringing its extraordinary worlds to life. For Assassin’s Creed Valhalla, the series’ 12th major entry, Ubisoft tapped the talents of two franchise stalwarts, whose impact on its musical legacy has been unequivocal. 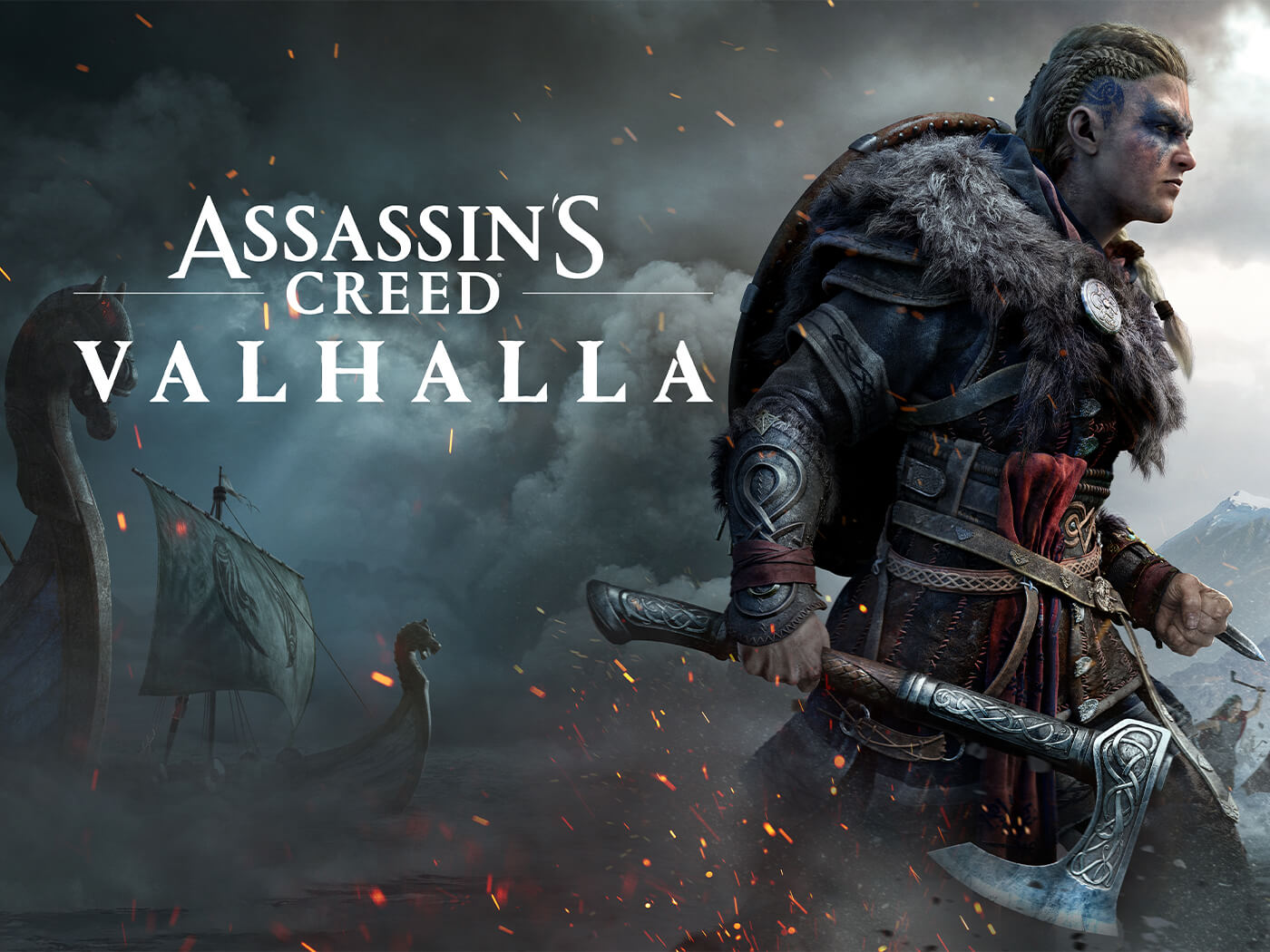 Listen to the Assassin’s Creed Valhalla score while you read.

Returning for her fourth outing, US composer Sarah Schachner previously contributed additional music to 2013’s swashbuckling Assassin’s Creed IV: Black Flag, set in the 18th-century Caribbean, and co-composed the soundtrack to 2014’s très bien Assassin’s Creed Unity, which took place during the French Revolution. She later took the reins of the score for 2017’s sprawling Assassin’s Creed Origins, set in Ancient Egypt. Having travelled around the world and engaged with global instrumentation, Valhalla’s Nordic setting was a particularly appealing prospect.

“The coolest thing about composing for Assassin’s Creed is that you get to do your own creative interpretation of the era,” says Schachner. “At the end of the day, we’re making a fun fictional game, so I focus mostly on the emotional mood and the atmosphere I’m trying to convey. It’s good to draw outside the lines a bit.”

Given its setting, Schachner relished the opportunity to do a deep dive into Norse music culture. “Learning new instruments from different parts of the world and exploring their sonic textures and possibilities is my favourite part of the process,” she says. “For my score, I blended Norse and Anglo-Saxon influences, combining period instruments with modern synthesis to subtly reflect the fictional sci-fi angle of Assassin’s Creed.”

Also returning to the franchise for the first time in almost a decade is Danish composer Jesper Kyd, also known for his work on popular videogame franchises Hitman and Borderlands. Kyd provided the score for the first Assassin’s Creed game, released in 2007 and set during the Third Crusade, in 1191, as well as the three subsequent titles, two set in Renaissance Italy and one in Constantinople. Having set the standards and laid down the motifs, Kyd’s musical DNA has been woven into the fabric of every Assassin’s Creed experience since.

Having spent the past year working on a series of concerts celebrating the 10th anniversary of Assassin’s Creed II, the series has remained close to Kyd’s heart. While Valhalla marked the composer’s long-awaited return, it also represented an opportunity for him to develop his own ideas anew.

“It was important for me to start over and write something really different from what I’ve done in the past,” says Kyd. “The depth of the music style is still a key focus, and so is having the Animus influence the live performances with electronics. Apart from that, this feels like a totally different approach.”

Assassin’s Creed games see players exploring the memories of historical assassins over the course of various timelines. Blending real-life events with fictional narratives, these in-game experiences are accessed via the Animus, a machine that enables the games’ protagonists to relive the genetic memories of their ancestors.

In Valhalla, these memories take place against the backdrop of the Viking expansion across Europe. Set in 873 AD, the player assumes the role of Eivor, who, prompted by war and overcrowding in Norway, leads his or her clan to settle new lands in Anglo-Saxon England.

“The depth and atmosphere are really key in this score, and the melodies and performances are a close second,” says Kyd. “Valhalla is played in a vast nature setting very different from previous games, which are more city-based. Because of this environment, I was able to go in a more spiritual direction. I tapped into things such as the Viking religion and complex afterlife belief system.”

While initial conversations around the game’s musical direction began several years prior to Valhalla’s release, both Schachner and Kyd were given access to early iterations of environments that would inform their initial musical sketches and ideas.

“I actually began composing in about September of 2019,” says Schachner. “Most of the time, we’re working with pretty rough visuals, scoring narrative sequences completely out of order, and only seeing patchwork bits and pieces of the game as they become available. Open communication with the audio team is super-important, as they test each cue we write in context.”

“The game world was quite far along when I started,” adds Kyd. “Ubisoft would send me flyby videos from the different areas that I would be scoring, such as Northumbria, Wessex, East Anglia and Norway. That was super-helpful and really inspired a lot of ideas.”

Kyd and Schachner both employed a blend of acoustic instrumentation and synthesisers to create a score that sought to capture both the historic elements of the game’s Norse environment, as well as the series’ overarching sci-fi elements.

“For my score, I acquired a number of Norse instruments I had never played before,” says Schachner, “including bass and alto tagelharpa, a horse-head cello, a plucked lyre and various animal-hide drums. Many of the sounds were run through external processing, such as the Elektron Analog heat distortion/saturation effects unit, and the Strymon BigSky reverb.”

While software instruments were employed for functional support or to bolster other sounds, they were always used sparingly; the focus here was largely on acoustic performance capture. Schachner used a Neumann TLM 103 microphone and a Manley Force four-channel tube preamp to capture the rawness and imperfections of novel acoustic instruments such as the skalmejen – a kind of primitive Viking-age oboe – and the tagelharpa in close-mic’d settings. Wind instruments such as the ancient carnyx, an ornate horn held vertically aloft above the player, were reappropriated for more contemporary uses, with Schachner using one as a sound source in an unlikely and decidedly non-ancient setting: Polyverse’s Infected Mushroom-endorsed Manipulator vocoder plug-in, which she then played like a synth. Didn’t expect an Israeli psytrance duo to have played a part in this Viking-themed soundtrack, did you?

Kyd also used a number of synths, including a Yamaha CS-80, a Moog Matriarch, and the 1972 version of the Arp Odyssey 1. Blended with the sounds of various Viking horns, as well as other ancient instruments such as the bowed rebec, crwth and lyre, Kyd sought to craft an authentic period atmosphere that felt distinctly rooted within the Assassin’s Creed universe.

“Having the actual instruments at my disposal gave me a much better insight into how to compose music for these instruments,” he says. “Once I started playing the instruments, I decided to perform all of them myself, in addition to string instruments, such as the cellos and the morin khuur.”

Working closely with Ubisoft’s audio team, Schachner and Kyd were advised to steer clear of sound palettes that might be comparable to prior depictions of the Viking genre. “They didn’t simply want a Viking-era carbon copy or anything Hollywood orchestral,” says Schachner. “We were all on the same page – to create a custom palette that respected and referenced the historical influences, while feeling uniquely Assassin’s Creed. It was great to have a lot of space to explore and figure that out.”

“They told me specifically that they were not looking for symphonic elements such as a string section,” says Kyd. “Sounds from the orchestra – for the most part – are not part of the score. Solo instruments, however, such as cello, solo violin and Viking horns, are employed.”

For a composer, the franchise’s depiction of culturally diverse themes and time periods provides fertile ground for musical experimentation, as well as unique challenges.

“Primitive styles of regional folk music that aren’t necessarily harmonically complex can seem deceivingly easy to write and produce,” says Schachner. “But that was far from the case. The rustic instruments are fairly limited and were not easy to play. I was continuously trying to find new ways to write for them to keep the score from feeling repetitive.”

“I decided to acquire a lot of ancient instruments to learn how to write for them,” says Kyd. “It was going to be a very acoustic-sounding score, with all the instruments performed live, and stylistically a huge departure from previous Assassin’s Creed scores of mine. Since we wanted everything to come from a place of realism, I’m blending live recordings and performances with modern recording techniques and mixing methods. This allowed me to push the limits of what’s considered the Viking music genre and to create something that sounds uniquely Assassin’s Creed.”

With Valhalla’s game world being divided into several distinct regions and locations, Kyd and Schachner shared the responsibility of developing themes for different locations, missions and play states, as well as the game’s cinematics, rather than focusing on specific elements.

“Jesper and I both wrote close to three hours of music and the interactive gameplay score was split up evenly between us,” says Schachner. “That includes everything from stealth, exploration, combat, custom quests, regional music and more. When there are multiple composers, it’s not uncommon to be restricted to just one area of the game, so it was great to both get to do a bit of everything. It makes for a nice sonic balance.”

Though Schachner and Kyd worked independently throughout the scoring process, the duo received guidance from Ubisoft Montréal audio director Aldo Sampaio and music supervisor Simon Landry on how their work would blend cohesively.

“I trusted the audio team’s broader vision in how all of our work would come together,” says Schachner. “The most important collaboration is between the composer and the audio director. While the constraints of the technical audio system dictate certain aspects of the music, sometimes the music can inspire changes to the interactive system. I really enjoy that collaborative back-and-forth.” 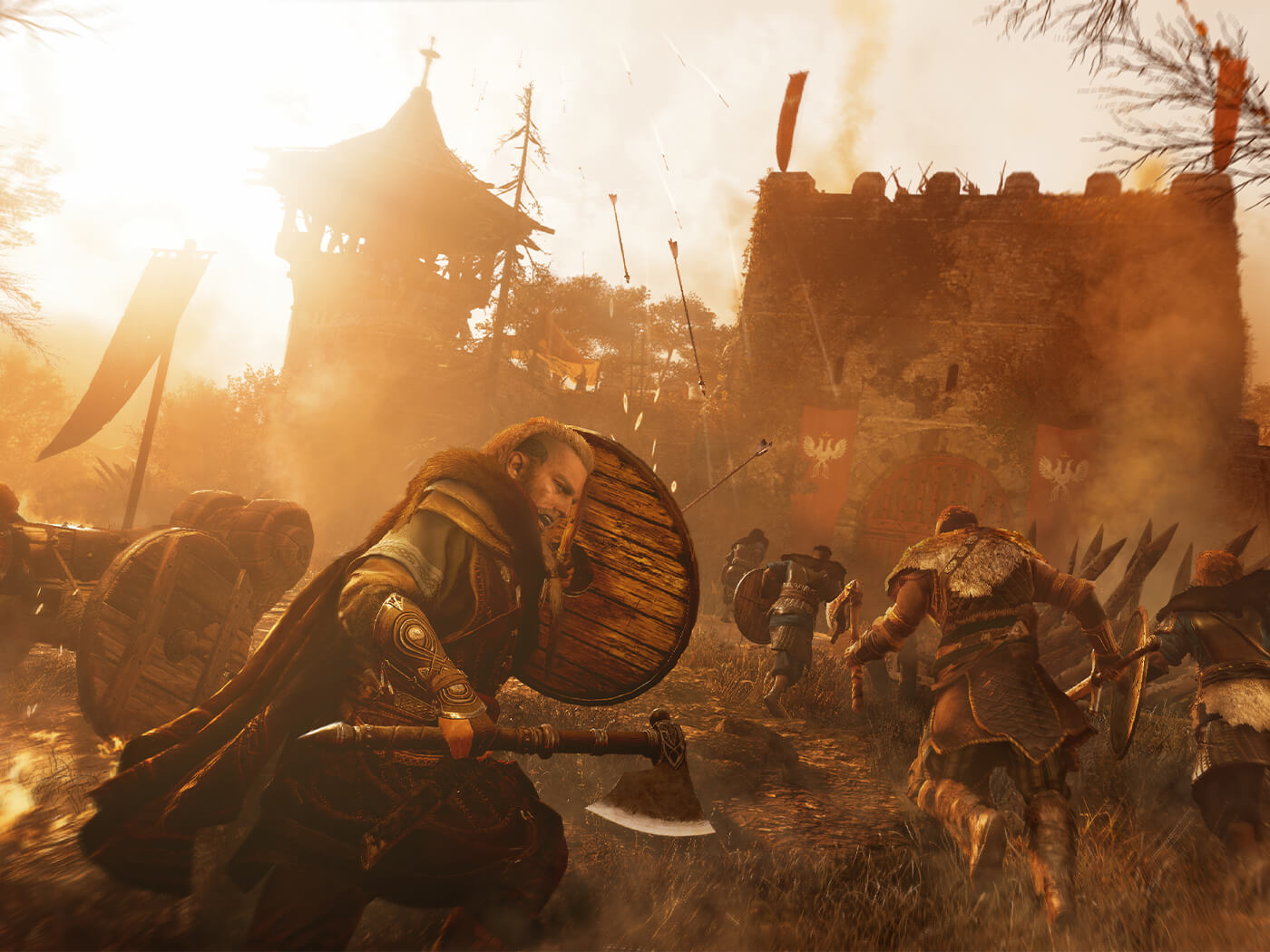 For the creation of the game’s main theme, however, which came towards the end of the project, Schachner and Kyd collaborated directly for the first time. Their work was further strengthened by support from Norwegian musician Einar Selvik, best known for his work as the drummer in satanic Norwegian black metal band Gorgoroth, and for his Nordic folk project Wardruna.

“When Ubisoft told me they had brought Einar onboard, I was really excited,” says Kyd. “He brings an authentic lyrical feel to the project with his original folk songs. While I also worked on adding an authentic feel, my music was focused on creating a cinematic and dramatic mood.”

“Jesper came up with an initial vibe and melodic motif that was a great starting point for the theme, tapping into Eivor’s personal journey,” adds Schachner. “I expanded on the melody and produced it out into a full arrangement ready for Einar to sing on. It was an unusual situation to be asked to co-write a main theme when there wasn’t an existing collaborative relationship between the artists. But I love how our sounds ended up merging together.”

Assassin’s Creed Valhalla is out now on PlayStation 4, Xbox One, Xbox Series X and Series S and Microsoft Windows. Find out more at ubisoft.com