“The less time I spend in the studio, the better the end result is”: producer Roland Tings

The Australian producer tells us about his hybrid live show, the gear he’d never sell and how he started out 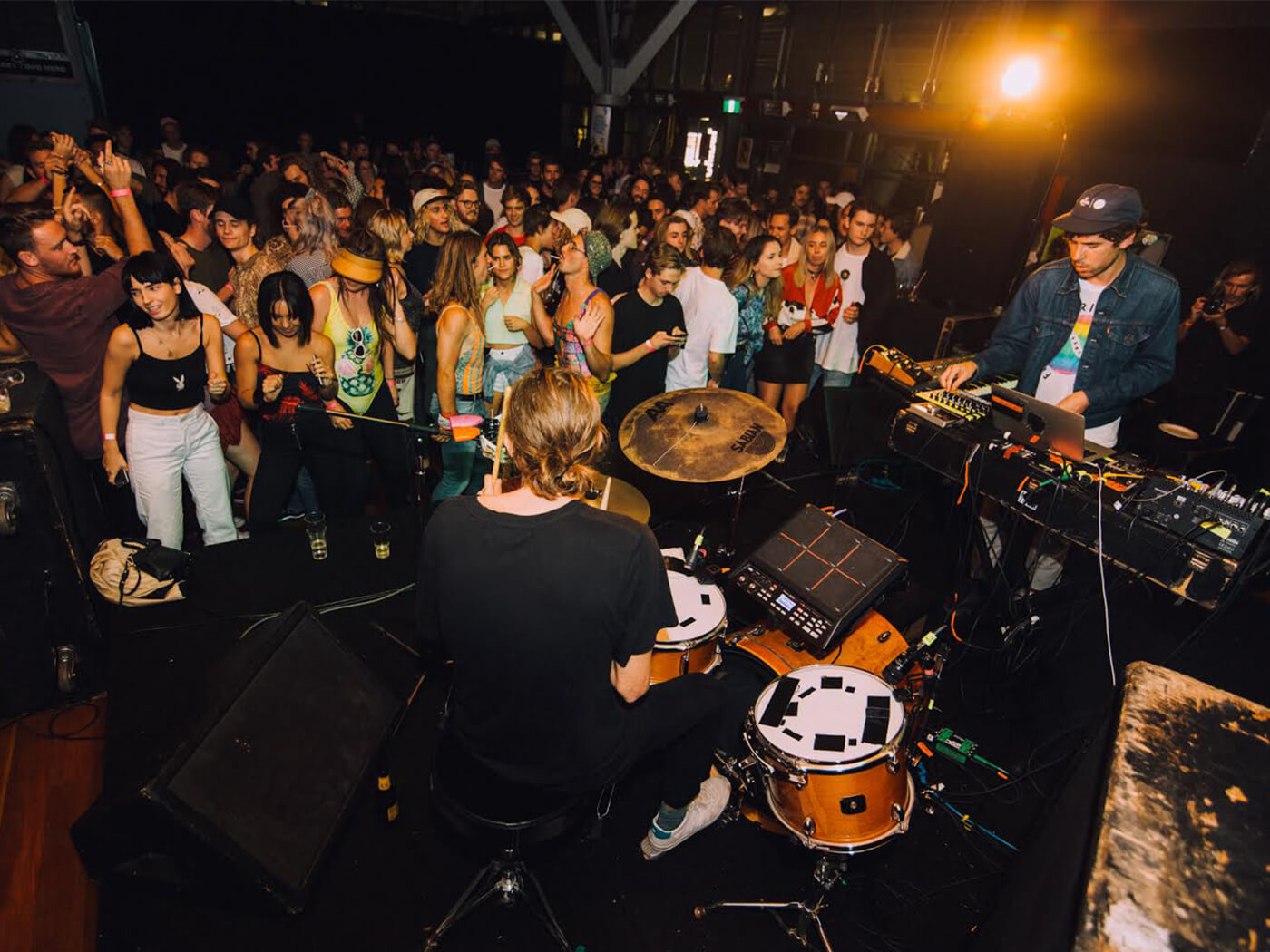 Roland Tings’ music makes an impression. At least, it did on Norwegian disco supremo Prins Thomas. When the veteran heard Tings’ first EP in 2012, he was compelled to sign the newcomer. Tings’ debut album was released in 2015 on Internasjonal to critical acclaim, and the much-lauded Each Moment A Diamond EP followed in 2017.

Now, Roland is back and has a brand new album on the way, titled Salt Water, with single Always Rushing feat. Mild Minds out now.

We tracked Roland down for a chat about getting started in music production, his favourite studio gear and developing his phenomenal hybrid electronic live show.

How would you describe your sound, and what are your influences?

Awkward dance music for awkward people. There are too many influences to mention them all! Everything from Larry Heard to My Bloody Valentine, Suicide and Arthur Russell.

What were your first steps into music production and music-making?

I downloaded a cracked copy of Ableton, a Nintendo-style VST and started poking around on my computer keyboard. I knew I wanted to make music that sounded like popular Australian electronic acts at the time but really had no idea what I was doing. It was a crappy desktop PC and later a MicroKorg. I didn’t even get close to making anything I would consider “music”, but at least it sent me on the journey towards making real records.

The 2016 / 2017 live touring modular setup. With help from my friends I created a 2 channel looping system enabling me to mix between looped sequences and live modular sequences the way you would with a DJ mixer. This set the tone for the next 2 years of work – bringing the live fun back to the recording process.

What were your first decent bits of gear, and how did you develop your skills and sound?

The first things I bought that were really good were a Boss RE-201 Space Echo pedal and a Roland Juno 106 synthesizer. These are the pieces that really defined the sound of the project. I still use them on absolutely every single piece of music I make.

Tell us about your live setup and how everything works

We have a live drum kit on stage with a trigger on the kick drum and an SPD loaded with weirder electronic sounds. The kit and SPD go to front-of-house like normal, but they’re also split off to a mixer in my setup. I have an EHX Cathedral Verb and the Boss Space Echo running on sends on this mixer, so I can add dub FX to the drum sounds, which are then sent back to FOH. It creates a fantastic live dynamic with the drummer and I truly working together to pull off interesting sounds.

Then we have a Roland Juno 106 playing back MIDI sequences also running into verbs and delays, then a lot of backing tracks with DJ-style EQs for dramatic builds and drops. We also occasionally have a guitarist and synth player who play everything live with very minimal sequenced stuff, which adds a great live element to the show. 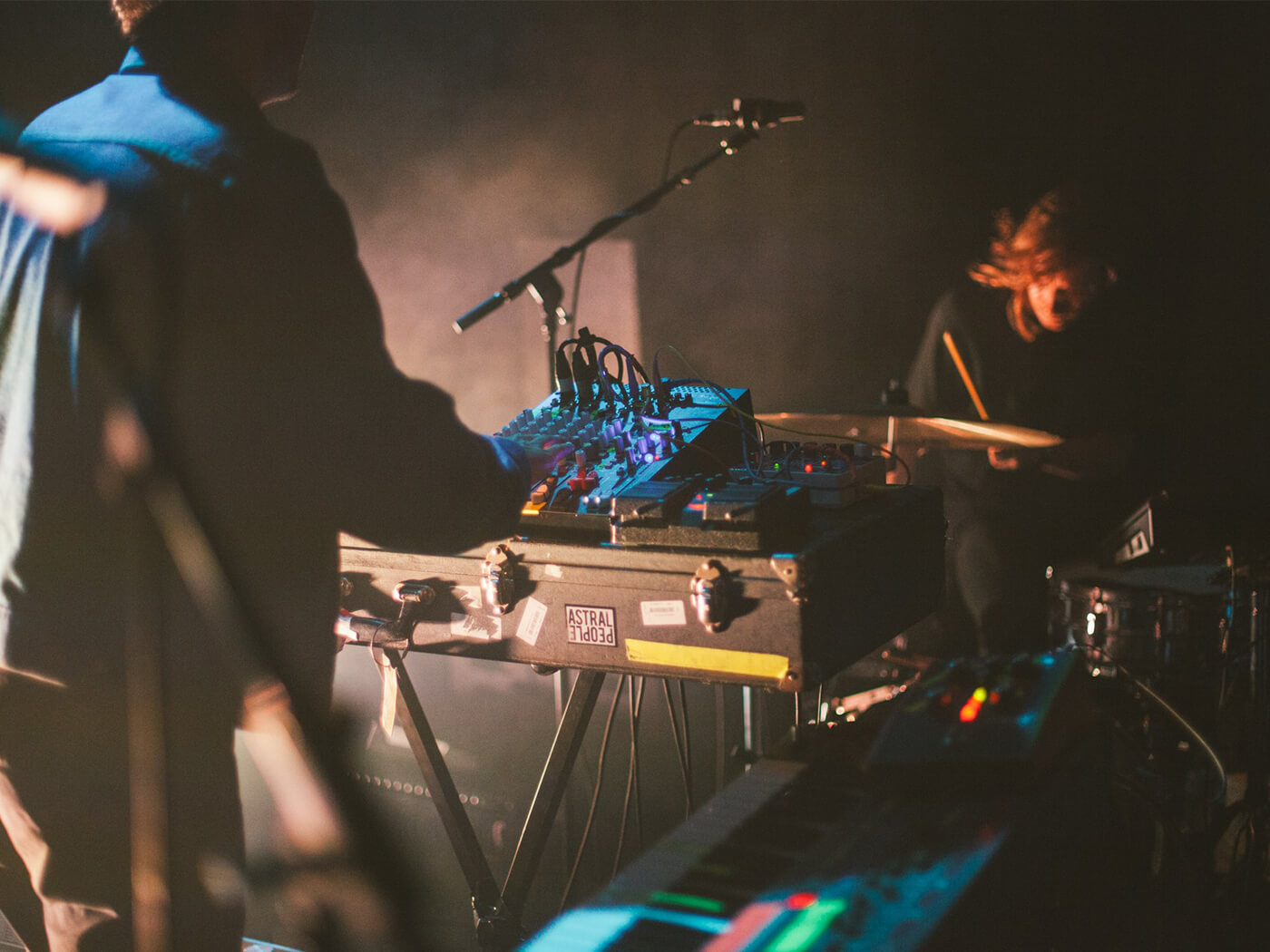 Does the way you play live influence your songwriting and production process?

Absolutely. I’m always thinking of how a song might be done live when I’m writing. The live show to me is super important, and I always want to bring something to the table that is different from the stock standard “press play” live set that was commonplace a few years ago in the electronic world. Adding live drums to the live show has inspired me to put more live drums on the record. Hopefully, when we come to adapt the new material to the live show, it translates in a more natural way. 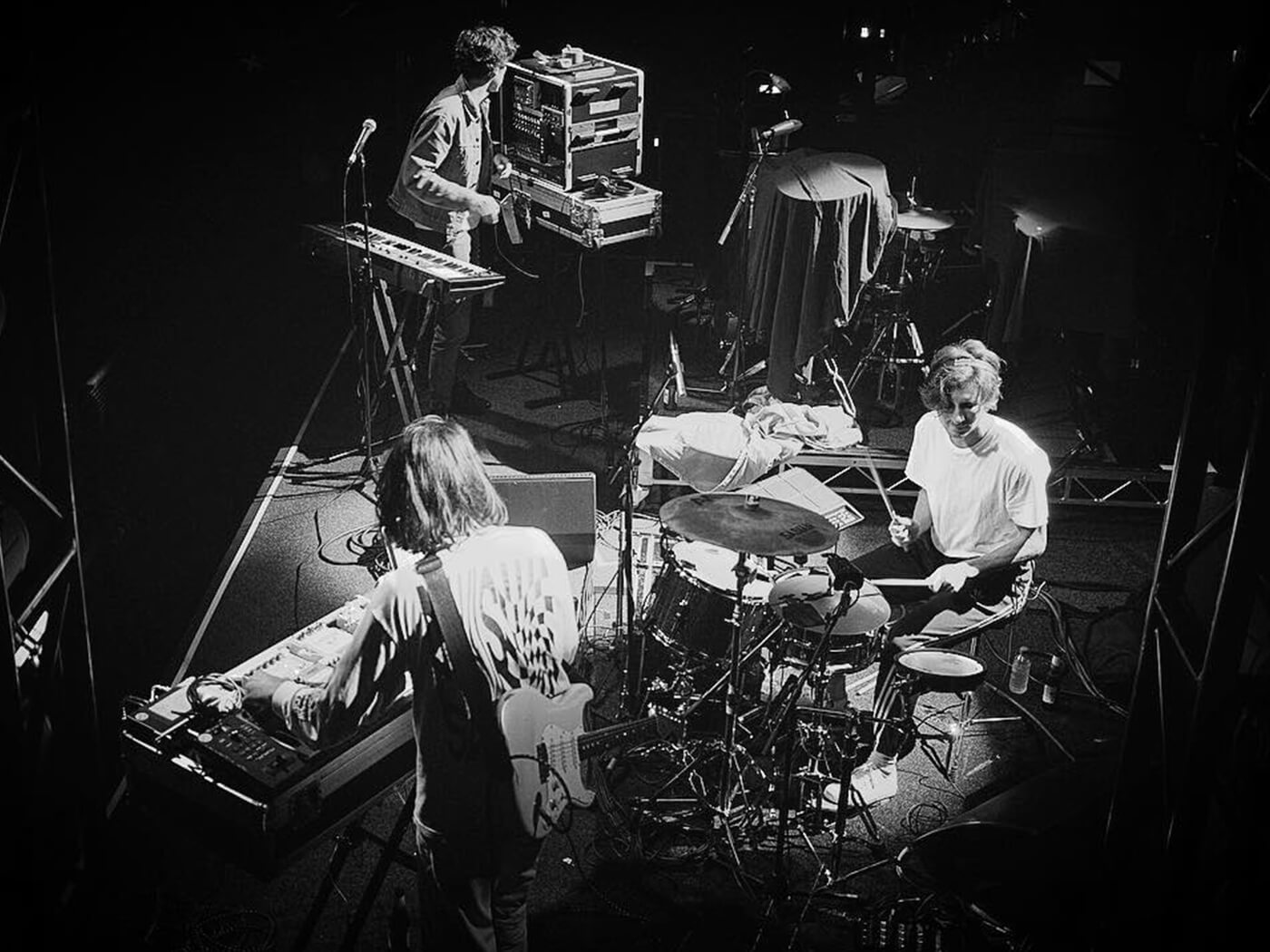 How does technology influence your music-making generally?

There’s no escaping the influence of technology. Whether it’s discovering an inspiring song through a mix you heard online or more directly buying a flashy new synth, it all plays into the end product. I’m not even sure if I would be able to create anything if I was sealed off from that sort of inspiration.

What piece of gear would you never sell?

My Roland Juno 106. Never once considered selling it and never will. It’s a basic synth, and I always think I’ve discovered everything it can do, but once I dig into a bit of post-processing, I’m amazed at its versatility. 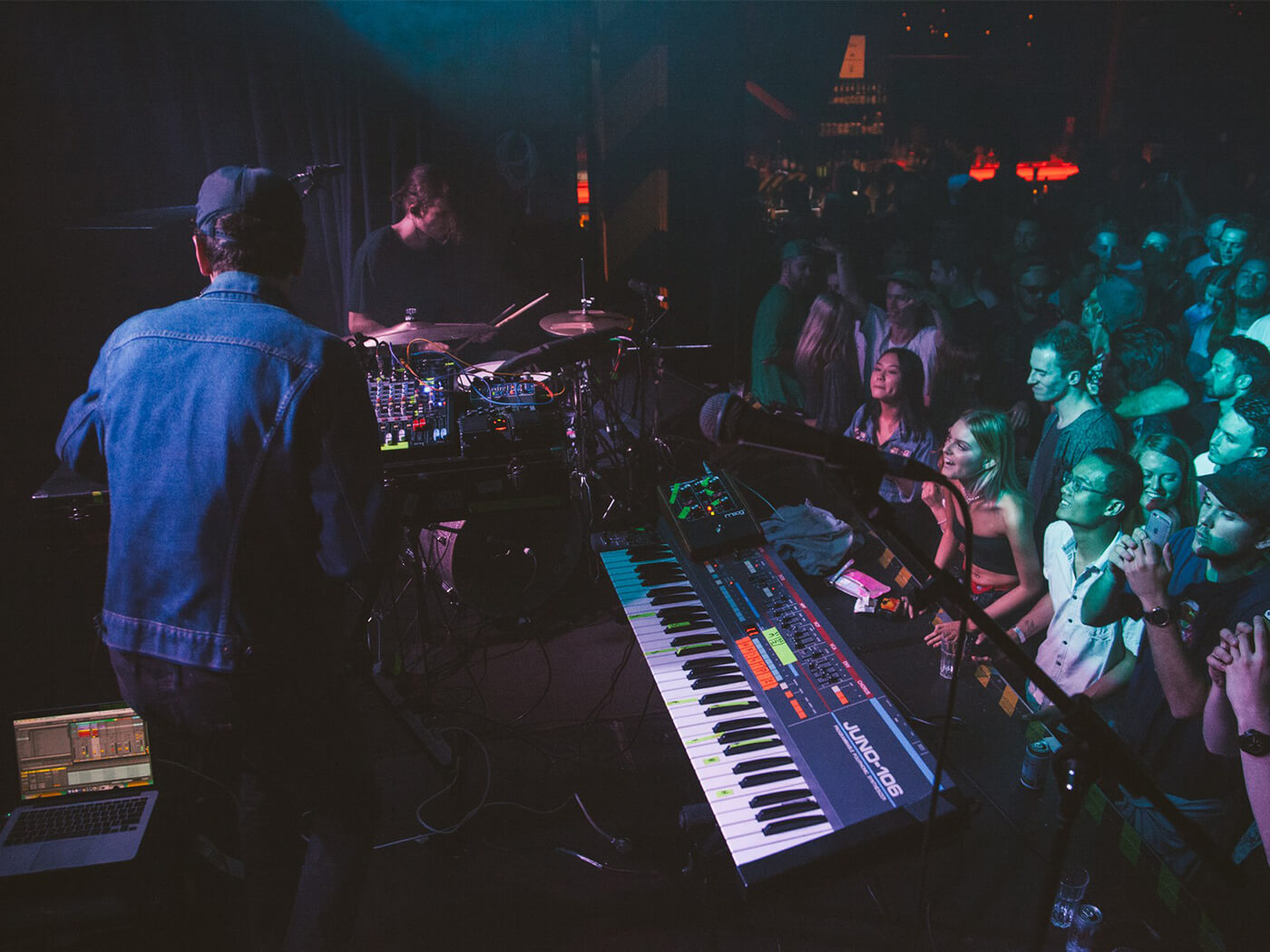 What couldn’t you make music without?

Space and time to myself. I need to just have time out to let things percolate. The less time I spend in the studio, the better the end result is. Getting out into the natural world is the best for this.

What have been the most important pieces of gear for live performance? Why?

The laptop for sure, I can’t imagine using anything else. I’ve developed the show to such a level now that I don’t think there’s anything that could come close to the versatility. I guess I could replace it with something but god it would be a pain in the arse.

Tell us about the new record!

To be honest, there’s not a lot of production trickery going on on my side with the new track Always Rushing. The drums were recorded and produced by my collaborator Ryan D’Sylva aka Roy Blues and the vocals were recorded and produced entirely by Ben Plant aka Mild Minds. For my side of it, I think the best sound on the record is the warm Juno lead that comes in after the build-up.

It’s one of my favourite sounds ever; just a Juno saw wave mixed with a tiny bit of sub-oscillator for some nice harmonics. Then Dub Machines Modnetic plug-in doing a big tape echo and chorus, and a bit of Soundtoys Primal Tap for some woozy modulated action. 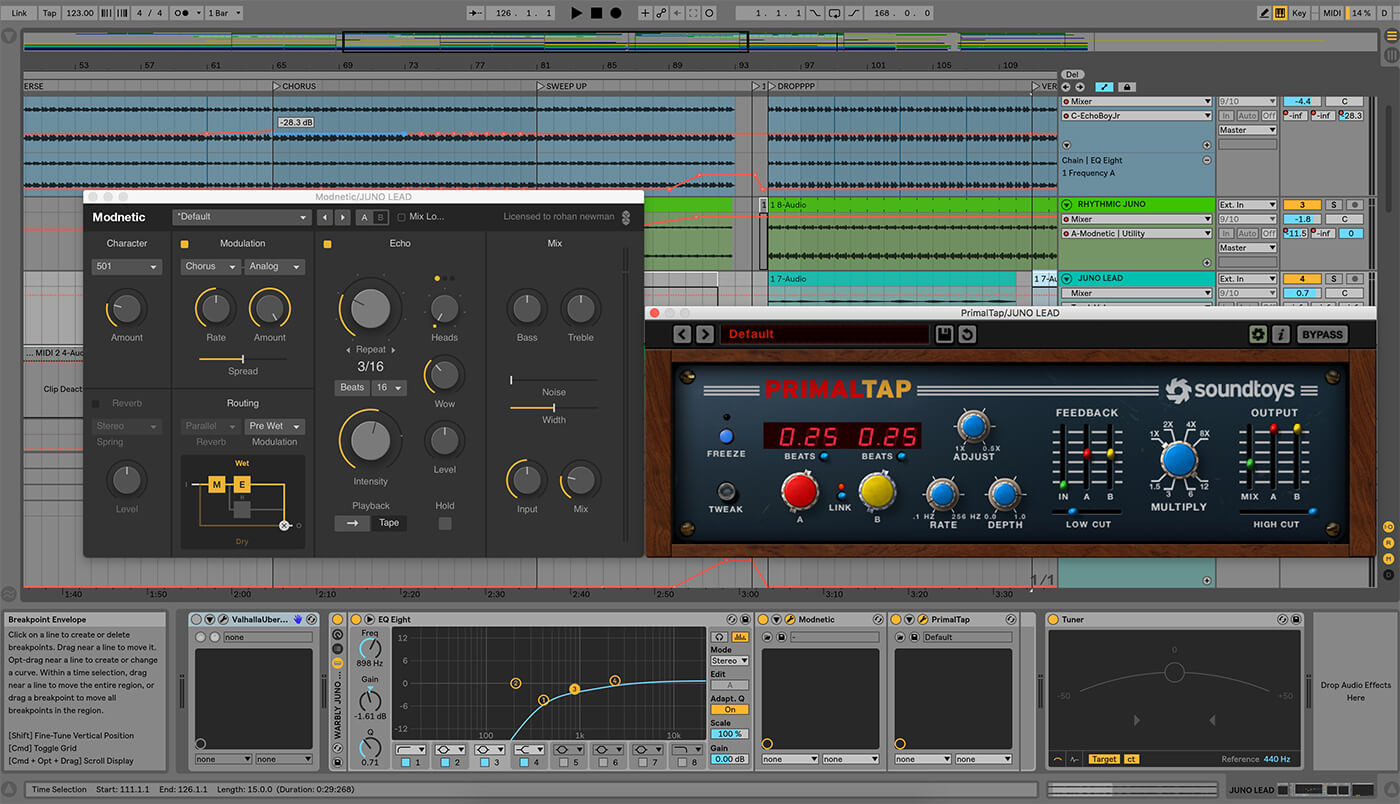 What’s next for you?

I’ve got an album coming out in November called Salt Water. I’m so pumped to get it out there, it’s got lots of great sounds on it, lots of talented people worked on it, and I just reckon it’s really good. Can’t wait to show everyone.