Plug-ins I Actually Use: Steven Bamidele

Learn what software Steven Bamidele uses to achieve his sweet, soulful sound and get a vocal production masterclass from his mix engineers. 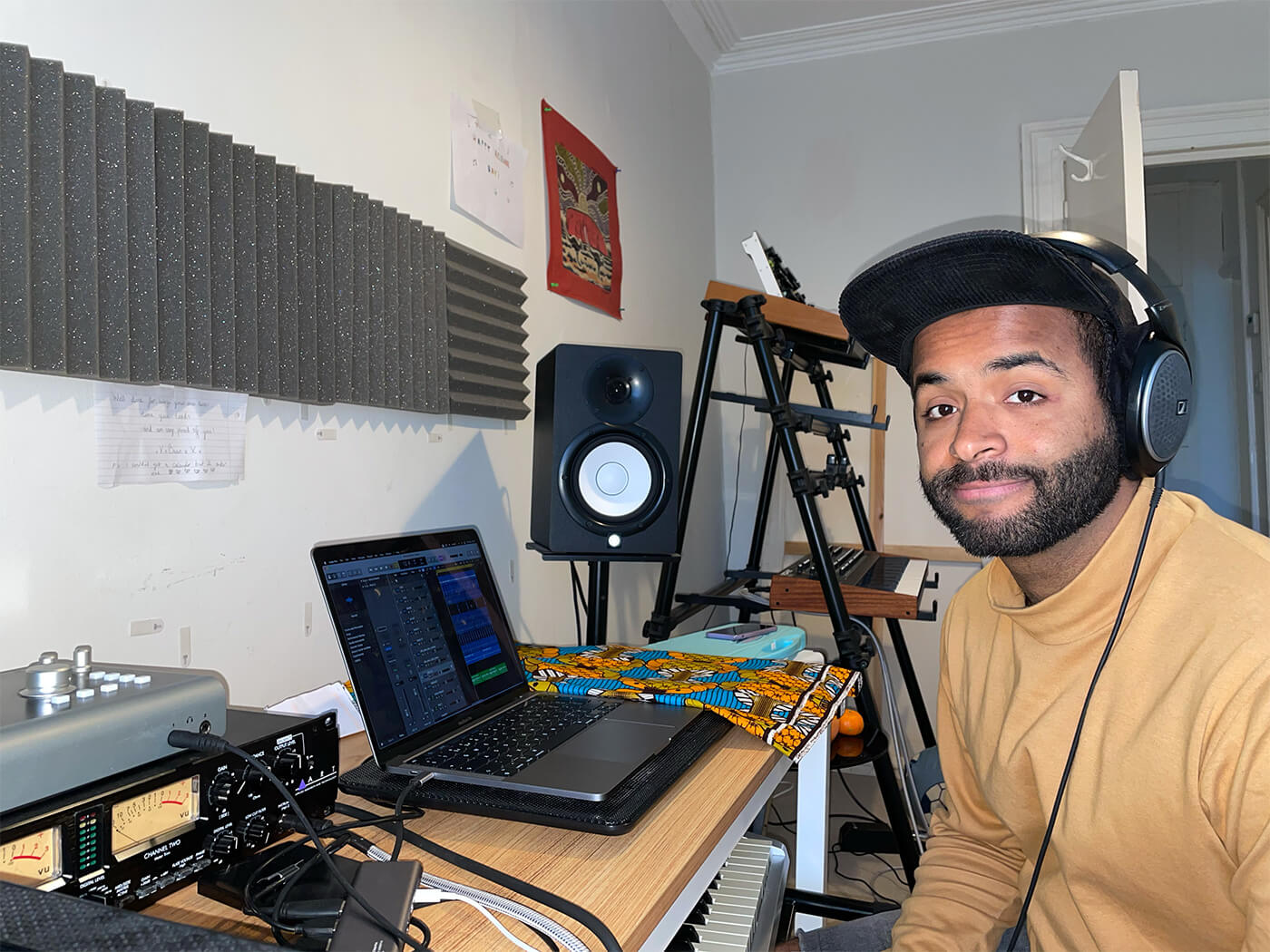 Brighton-based producer and multi-instrumentalist Steven Bamidele is a rare talent. He’s been fusing neo-soul, alt-pop, and jazz for almost a decade now, previously under the name Mirror Signal, gaining support from the likes of Majestic Casual and Gilles Peterson. Now releasing material under his birth name, Steven’s affinity with huge vocal layers, artful synth sounds and soft guitar licks is working wonders like never before. Raised on Marvin Gaye, Radiohead and his mother’s choir vocals, his musical style will draw you in and keep you hooked and eager for more.

Fortunately, his next EP, Uncrowded, is arriving imminently. We caught up with Steven to learn about his in-the-box production process, and why he just can’t get enough tape saturation. His mix engineers, Camden Clarke (Decoy Studios) and Scoop Monty, share their wisdom, too, explaining which plug-ins ensure Steven’s falsetto-laced vocals shine over his smooth beats.

Waves Gold, plus a few other individual Waves plug-ins. I’m using the J37 Tape more than anything – it has such a beautiful warm tape sound and it’s sprinkled all over this EP. I love the wow setting; I set the rate low and the depth at medium, which creates a lovely vibrato. Then, I whack up the saturation and the delay but low-pass the delay so it’s subtle. My mix engineer Tom Bellis and I used the saturation and delay features to add some beef and extra groove to the drums on Other Side. I’d highly recommend getting them, especially now you can subscribe monthly. 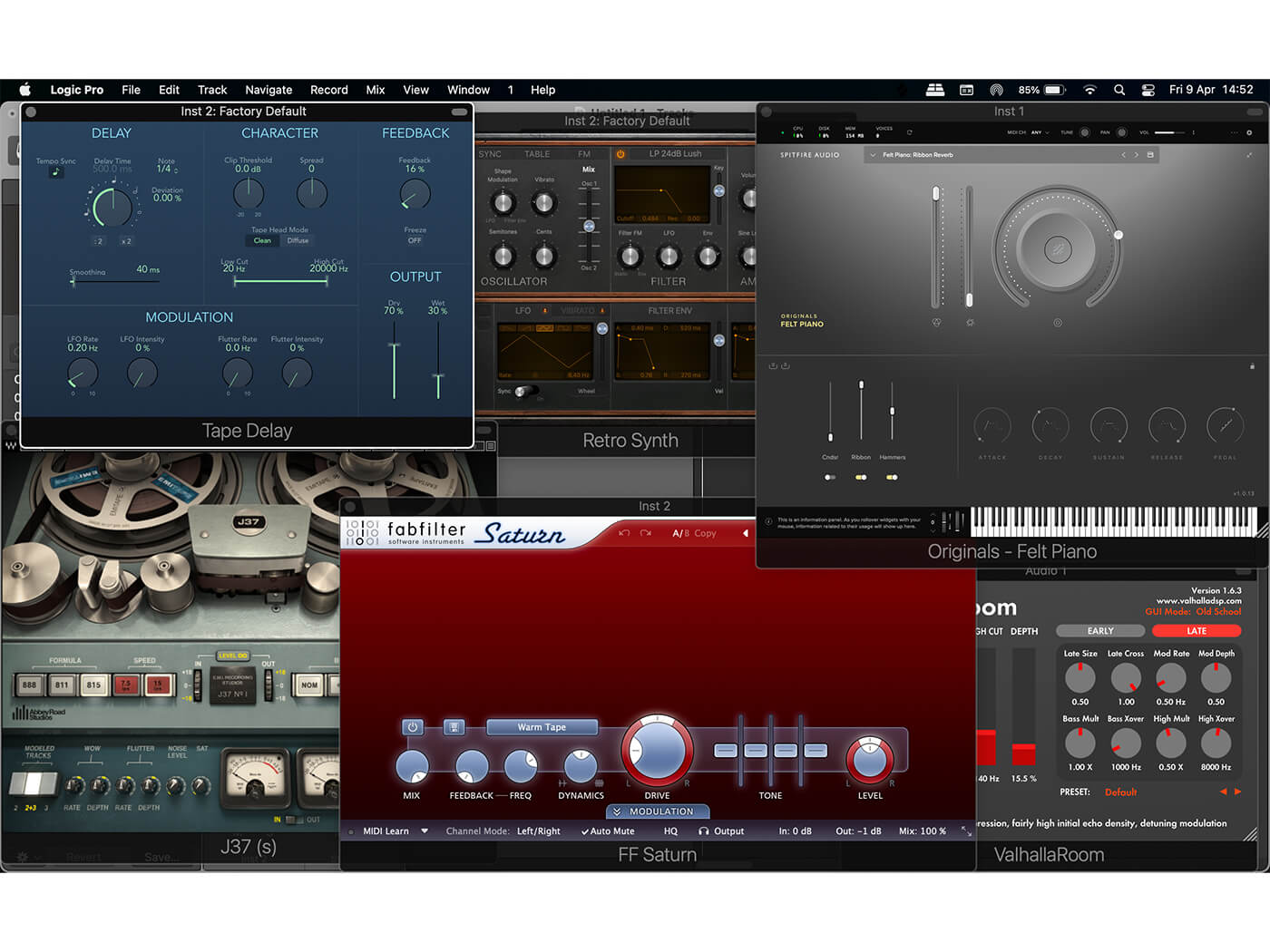 iZotope Vinyl. It makes everything sound crap in the best way. I used it loads on my track Lighting Fire.

Valhalla Room. It’s a stunning reverb with a soft and understated sound, very versatile and sounds great on anything. I tend to set the decay time high and bring the high cut and depth right down, which works nicely for my vocal. I’ve always loved reverb and I think it’s all about how you apply it and the context it’s in. I see it as more of an instrument in itself than an effect. 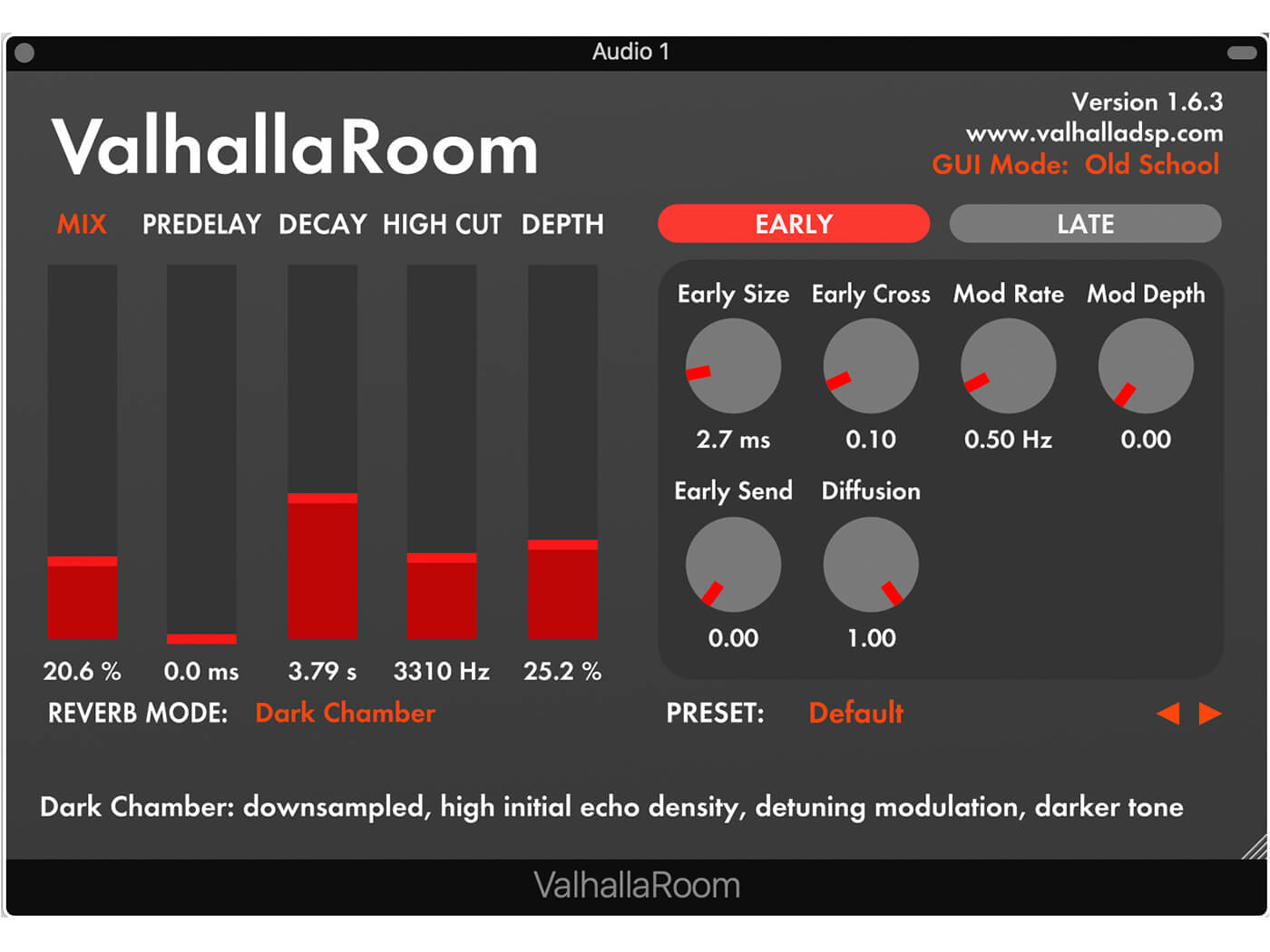 Arturia V Collection 7. Arturia has done a great job of emulating classic synths and I’m crazy about some of the synth and organ sounds in this collection. The amount of control you have over some of the keyboards is mind-boggling and I’ve barely scratched the surface.

Logic Pro’s Retro Synth. I fell in love with this plug-in the day I upgraded to Logic Pro X. I love the sound and look of it and I use it to create warm, barely noticeable pads that just sit in the mix.

What does your typical signal chain look like for vocal recordings?

Valhalla Room, with some variation of the aforementioned setting followed by FabFilter Saturn or Logic Amp for saturation, as heard in Other Side. I take off vocal processing before sending it to a mix engineer, but always with the intention of recreating what I did (just better!). 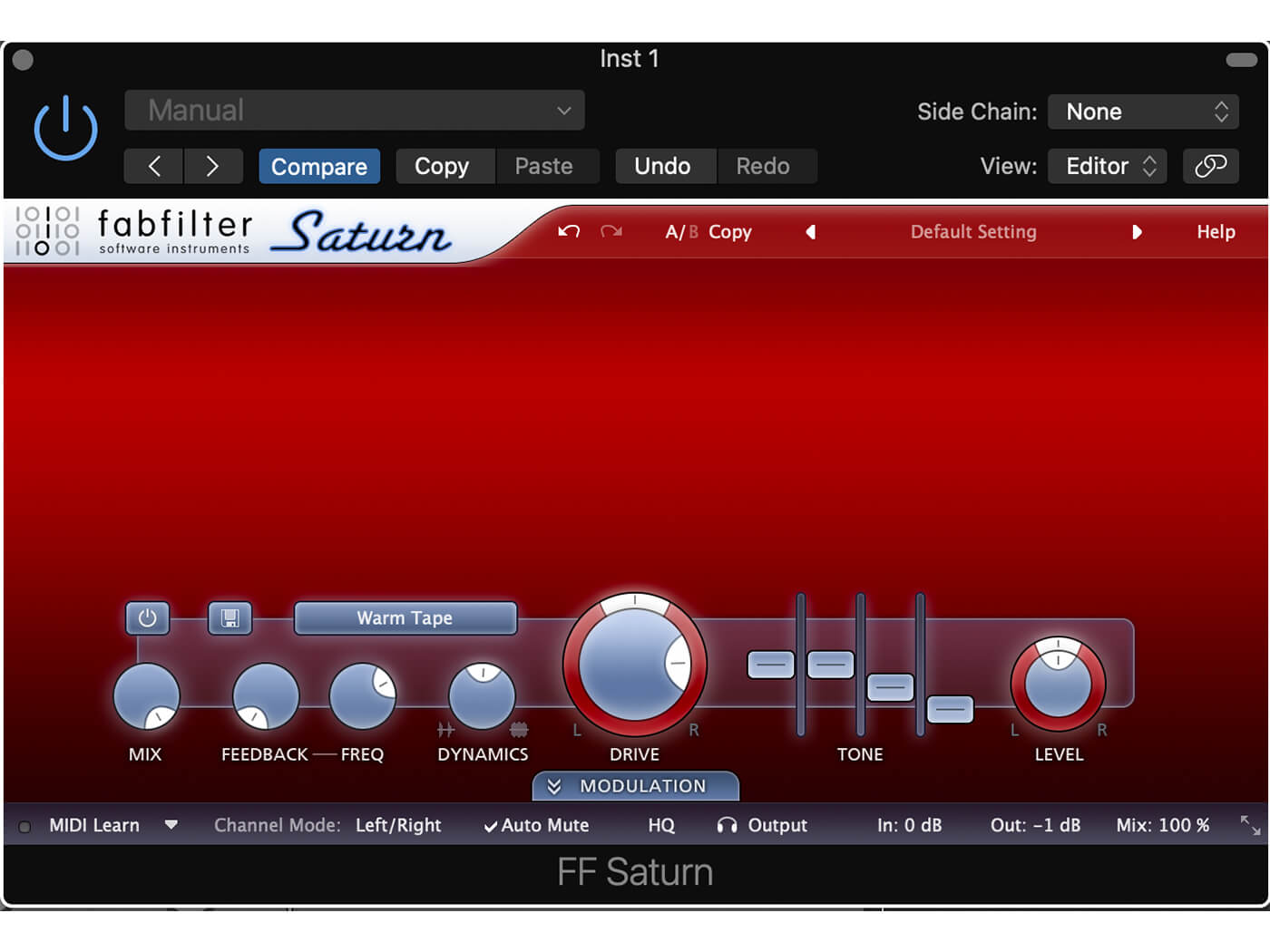 What does your typical signal chain look like for guitar and bass recordings?

For guitar, it’s the J37 or Saturn and a smidgen of Valhalla. For my last few releases, I’ve had the pleasure of Ish Hussein laying down the bass parts. He’s a Brighton heavyweight bassist and he’s got his sound nailed. I don’t do anything to his part, we usually get it great at the source. 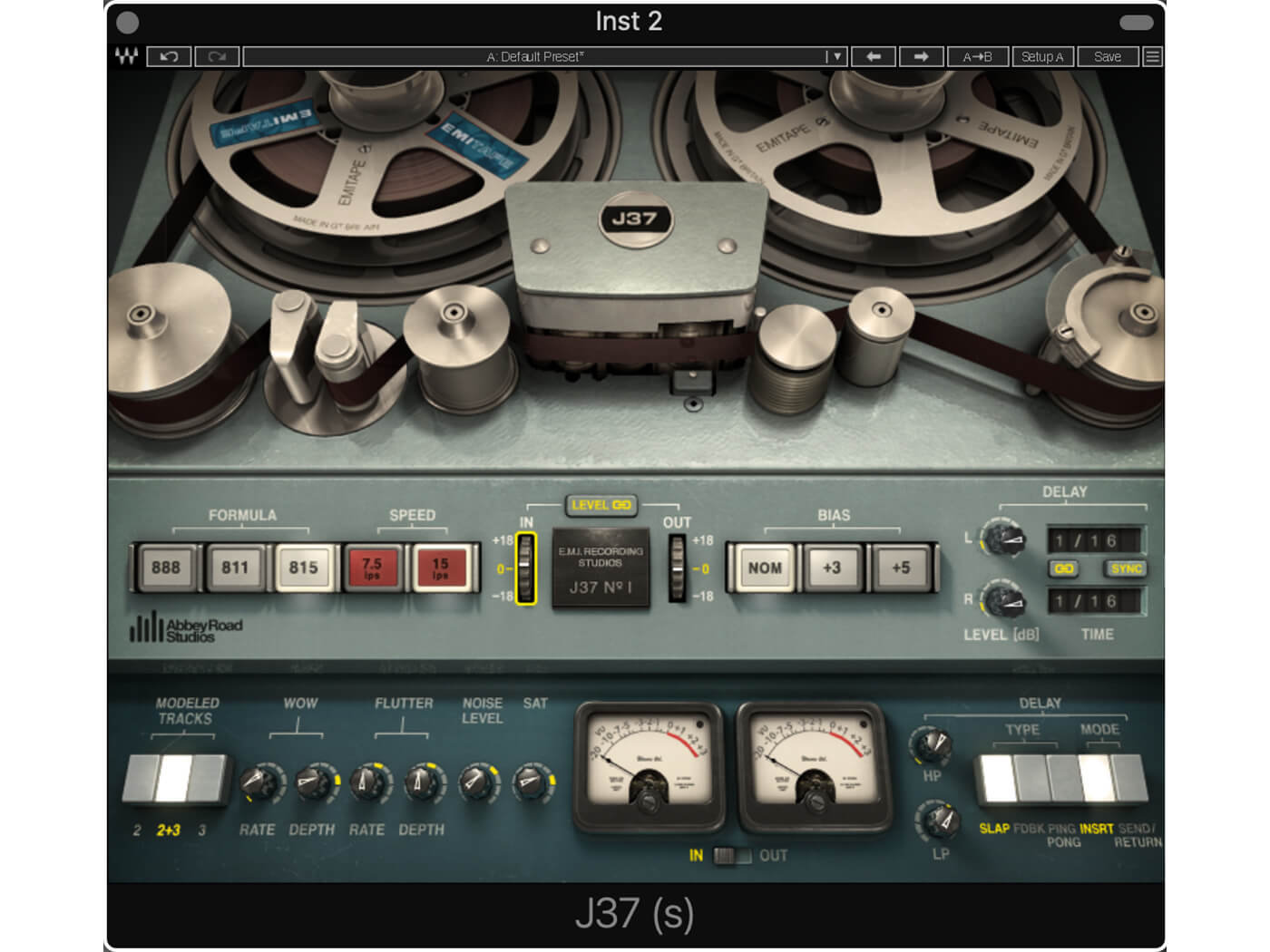 I never put anything on the master bus as final, but sometimes I’ll put Soundshifter Pitch on and change the pitch of the whole production for a few minutes just because I like the sound. I don’t do any proper mixing on the master bus. I’ve resigned myself to just doing what sounds good to me and then finalising it with a mix engineer.

To be honest, I still barely have a grasp on compressors, so any time I’m using one I’ll just go off how it sounds rather than what it says. I usually take these off when bouncing stems too, but I’ll keep them while producing just to temporarily tame a part that’s got a lot of dynamic range. Typically, I’ll use the FabFilter C2, or Waves C1 Comp.

Steven: Camden Clarke mixed my 2020 EP, A Sense of Belonging. I asked him about how he mixed my vocal:

Camden: “Before I begin using any plug-ins at all, I’ll go through and automate the vocals to attenuate the amplitude of problematic frequencies. I’ve been using this technique for three years now whilst assisting Cenzo Townshend at Decoy Studios.

When mixing any vocal I’ll start with FabFilter Pro Q 3, firstly to high-pass any unwanted mud and use its dynamic features to tame any low-mids. I aim for this to be as transparent as possible. 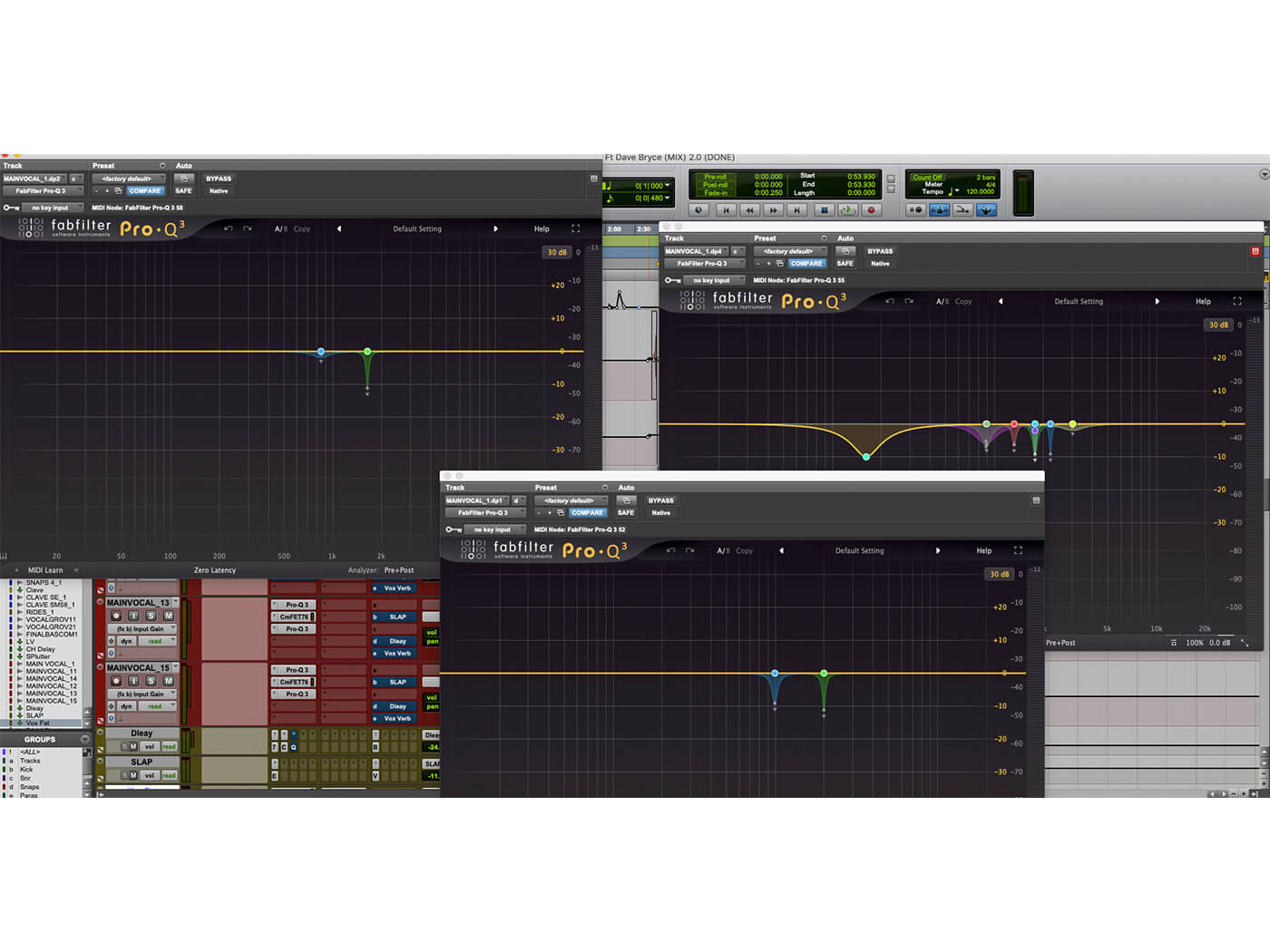 After my EQ, I’ll use a Waves DeEsser before hitting a couple of compressors – for Steve, I typically route an LA-3A into an 1176, usually Waves or UAD emulations. Once I’ve tidied the vocal with manual editing, EQ and compression, I’ll route the vocal through a tape emulator, either a Waves Kramer Tape or J37, to dull any harsh top-end and use the tape’s slap delay function to push the lead sonically back into the track so it doesn’t sound too dry.

Steve tends to record a fair amount of backing vocals as well as layered instruments. I use Wavesfactory Trackspacer to allow his lead to cut through everything else in the track. I initially heard Greg Wells using this technique and have seen it used first-hand with sessions from Joe Rubel; it works a treat. 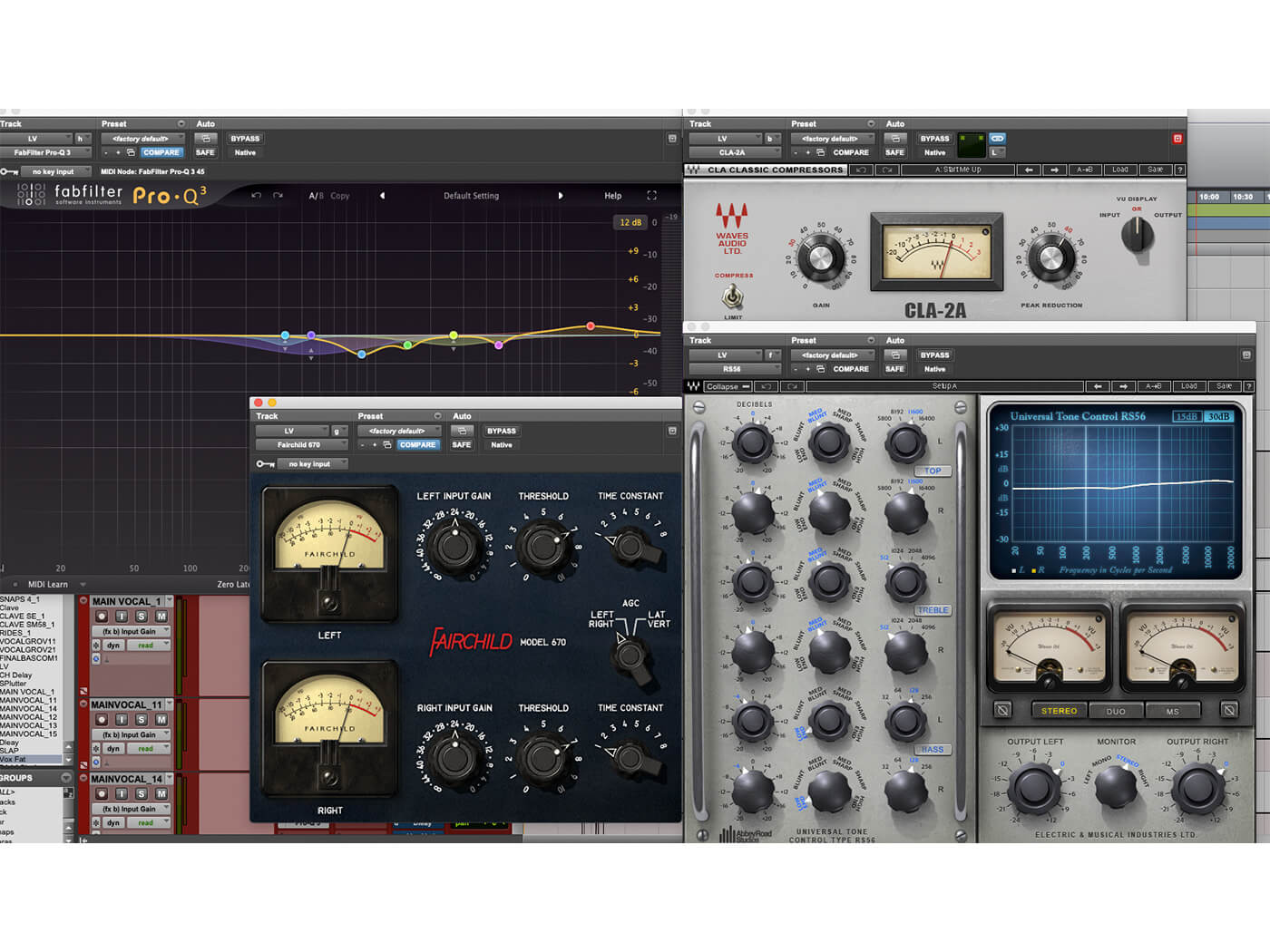 Lastly, the vocal effects. I send the vocal to a reverb, chorus, delay and parametric EQ. The reverb will either be a Valhalla or [XLN Audio] RC-20 Retro Color. I create multi-effects sends to get experimental and add chorus to reverbs, or distortion to chorus. I often sidechain my lead vocal reverbs very slightly to the lead vocal, again using Trackspacer. I find it gives the reverb a subtle movement that works with Steve’s style.

Basically, Steve likes weird sounds, so I’m winning if I can do anything to weird out the sound.”

Steven: Scoop Monty mixed my track What Happens Afterwards. He had this to say about mixing that vocal:

Scoop: “For this track, the vocal processing was straightforward. Thanks to Steven providing me with such a killer vocal performance, it was already halfway there.

I began by separating out each phrase of the vocal into their own tracks, giving me the ability to process different words and sentences individually with compression and EQ.

The EQ and compression settings are subtle at this stage: after high-pass filtering each phrase at around 100hz, I applied some dynamic EQ and small notch cuts using Fabfilter’s Pro-Q 3. Because each phrase was separate, I applied different settings for each, controlling any resonances and harsh frequencies accurately across the vocal. I also applied some compression to each phrase with Arturia’s FET-76 compressor, 12:1 ratio, medium attack, fast release. 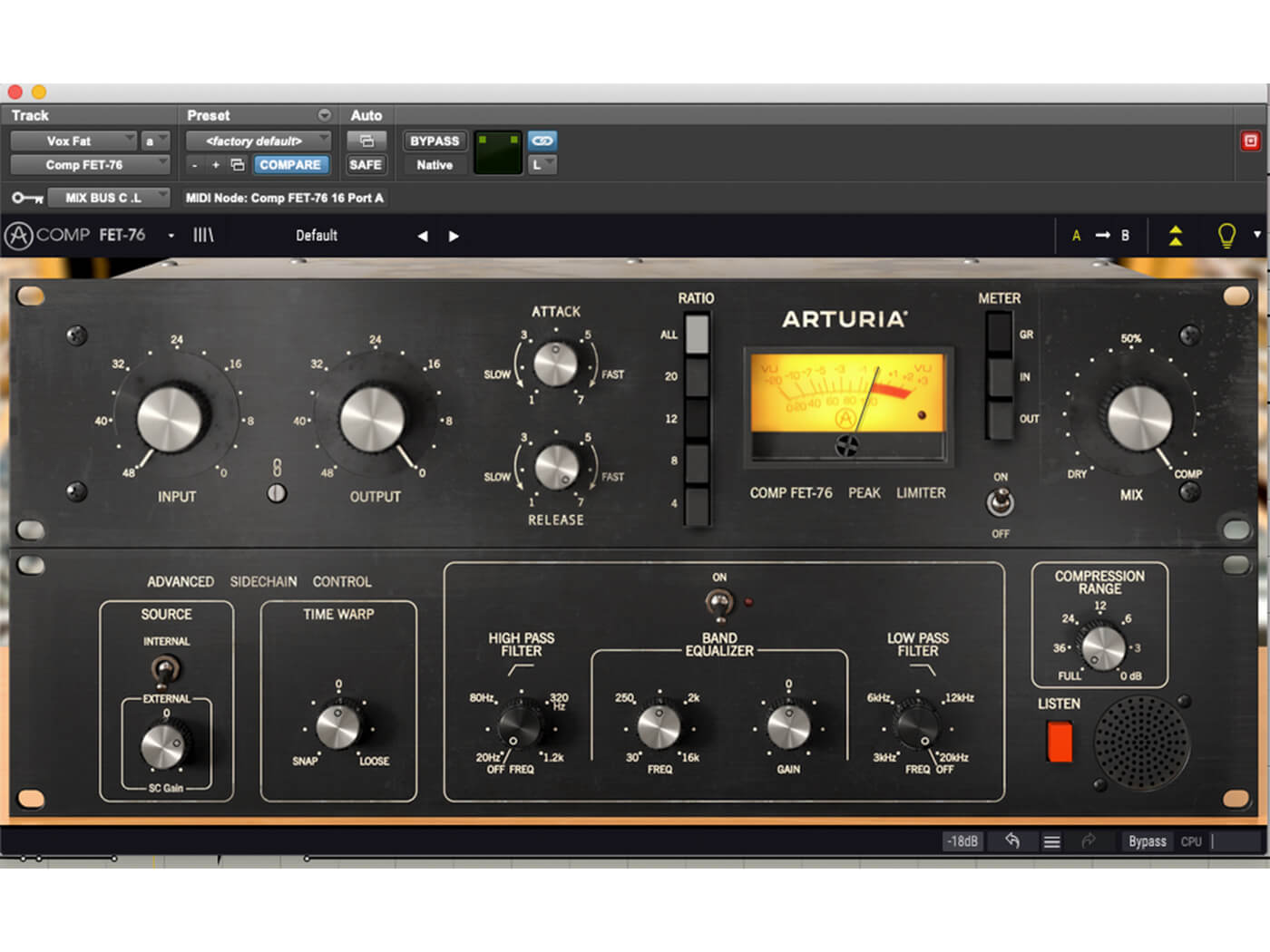 Once I had cleaned up the individual phrases I routed all tracks to a bus to process the complete vocal. The vocal chain on the bus starts with Arturia’s 1973 preamp, high passing at 50hz. This plug-in is so powerful, I love it. Even a cut at only 50hz lifts the vocal into a nice place. This is followed by Waves CLA-2A, doing a bit more catching at around 3-5db gain reduction, into another Pro-Q3 doing some overall dynamic EQ and small bell dips. I took extra care with frequencies between 2-6kHz for this vocal, taming sibilance and harsh resonances to make sure the vocal was smooth.

I then have Waves’ RS56 passive EQ with a -3db low shelf at 128hz, with a small 1.5dB dip at 512Hz and a 1.8B bell boost at 11.6kHz. This EQ gave the vocal more presence and overall balance. To finish off the chain, I had the Fairchild 670 comp with hardly any gain reduction followed by Waves API 550 EQ applying just a touch of gain. Those last two plug-ins are more to emphasise the tone of the vocal; the Fairchild brings some nice bottom end and the API just sounds great. The bus is being sent to one main reverb, and I used the Valhalla Room, which is a lovely sounding reverb. I know Steve is a big fan of it, too. 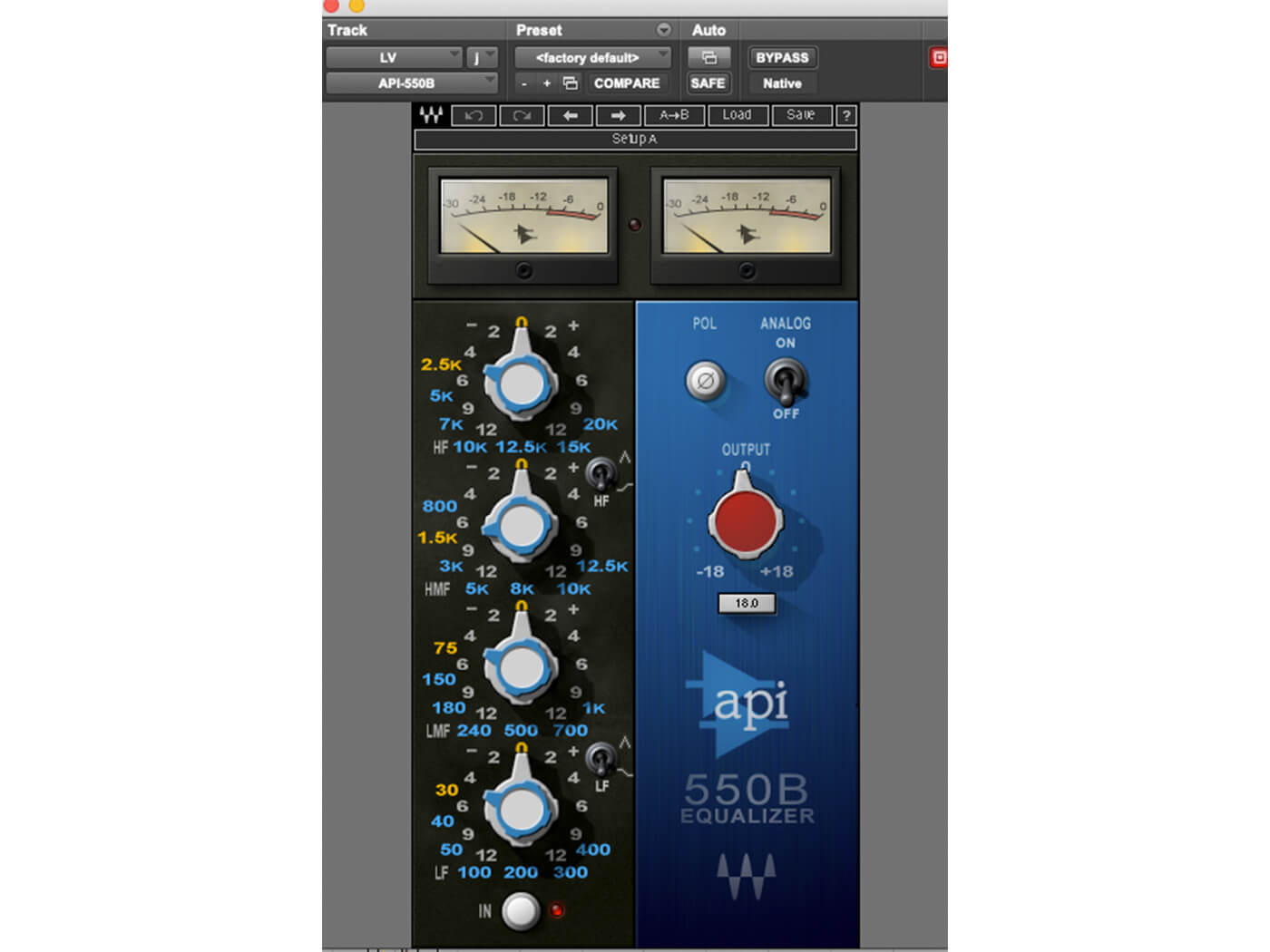 I love to sidechain vocal effects using the lead vocal. I had Arturia’s FET76 placed before the reverb with the vocal routed into it, so every time the lead vocal sings, the reverb ducks a couple of dB. This ensures the vocal doesn’t get drowned by the reverb and the dry signal of the vocal is still strong and punchy. It kinda hugs the vocal. That reverb, along with the other effects in the mix, are all sent to a bus independent from the vocals to be processed later on in the track.

All the vocals are routed to their own bus, where they’re being tickled by Waves SSL comp with slow attack, fast release 2:1 ratio and then into Soundtoys Radiator with a little treble boost – I love that plug-in, it brings a silky nature to vocals.

The only thing left to do vocal-wise is a little volume automation on the bus to help it sit with everything else. When you’ve got such a great vocal, all the attention can be put into the smaller, detailed stuff.” 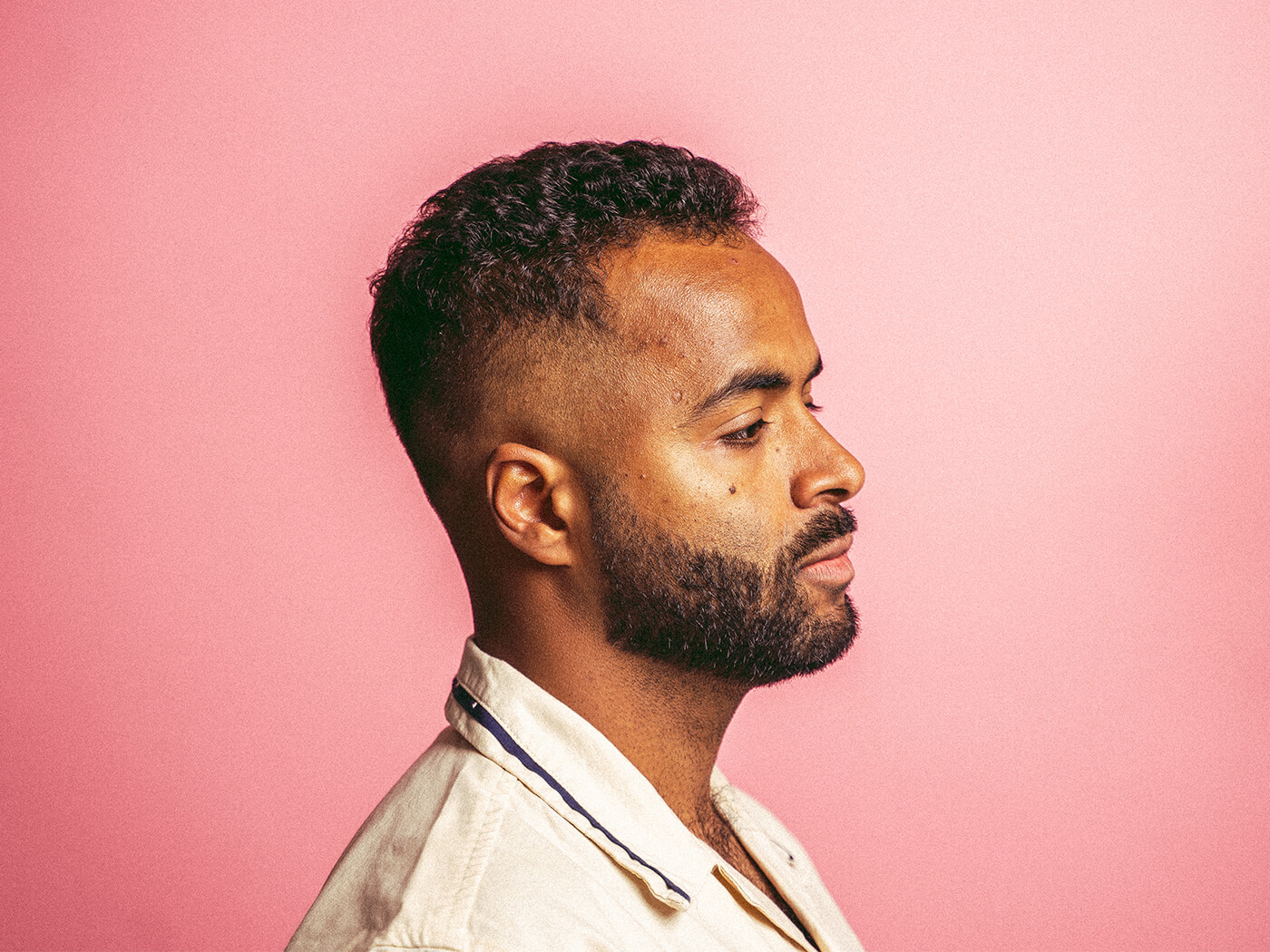