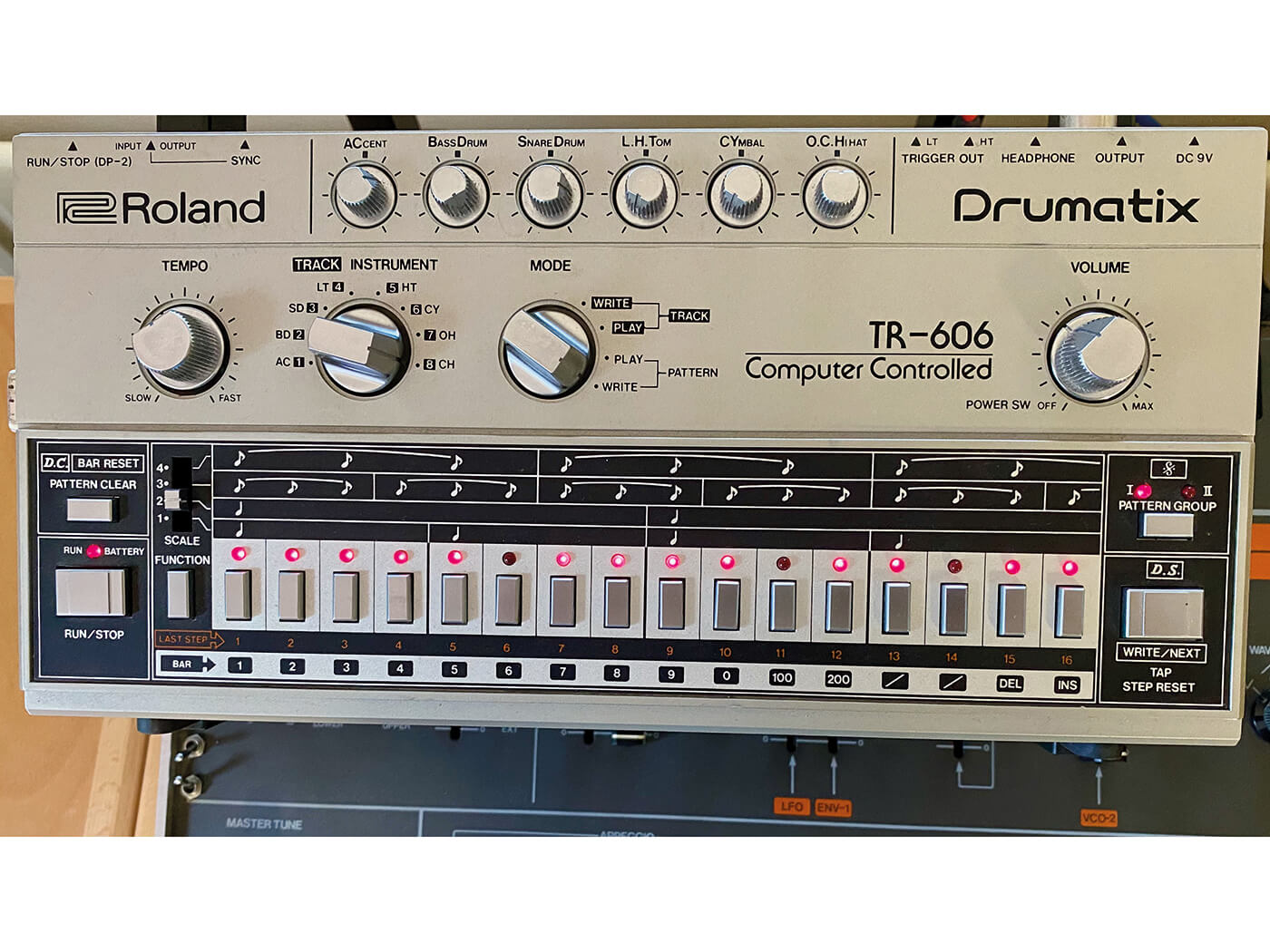 Do you remember those rare schoolteachers who seemed to exude effortless style? I was never a guitarist – blame the anguish that the strings inflicted on my fingers – but when I first met the über-cool guitar teacher at my school, he was walking down the corridor with a gigbagged guitar over one shoulder and a TR-606 over the other. It was the perfect fashion accessory, complete with a vinyl-plastic carry case. To be honest, I was more interested in the 606 than the teacher but I couldn’t meet one without the other. Minutes later, I was sat in a music practice room with a pair of headphones on and, for the first time in my life, creating beats using a drum machine.

It shouldn’t be a surprise that a guitarist might own a little drum box of this kind. The 606’s marketing campaign promoted the unit as a self-contained backing band for guitarists. Scarcely a coincidence, as the box mirrored the design of the TB-303, sleek, stylish and silver. Roland’s strapline at the time was, ‘We Design the Future’ and, in many respects, they were doing just that – though perhaps it wasn’t quite the future they intended.
The other trait that the 606 shares with the 303 is that it was a commercial flop. Its seven analogue drum sounds sport a low-quality charm considered by many to be the inferior to those of the TR-808.

It’s a testament to the intuitive design of the 606 that, as a teenager, I was able to sit down with it and program drum patterns with comparative ease and without any manual. The clunky potentiometers, found in the centre, let you select Pattern or Track mode, for either playing or writing. Selecting the sounds you wished to use while writing said patterns and tracks was easy too, thanks to the 16 silver buttons along the front and accompanying red LEDs, which illuminated to show the presence of a programmed step.

This creative process was at the forefront of what we now consider a routine method of step entry for many devices of this kind. But it wasn’t all good news. You can imagine the conversation with the finance bods at Roland as many elements, some of which were essential, were stripped from the unit. While there was a headphone output, all sounds were central and monophonic. No space was offered across the spectrum, which was echoed by the singular mono-jack output. There was no tuning control either. There was an Accent function but this had to be applied globally, across all drum steps, with no way of accenting those hi-hats without accenting all the other elements on the same beat.

It did, however, allow you to save 32 patterns, which could be ordered into complete song forms thanks to the inclusion of batteries to keep the patterns alive. It proved a popular machine with a number of eclectic acts, including Nine Inch Nails, Orchestral Manoeuvres in the Dark, and Orbital, and it’s still used to by the likes of Aphex Twin.

When I purchased my 606 about 20 years ago, I invested in a retrofit to extend its usage and allow me to trigger from my DAW. Put this unit through some plug-ins and those beautifully crisp and lightweight analogue sounds can take on animalistic tendencies. Place it alongside a modular synth and it can form the clock-based heart of a system, with the two tom outputs redeployed to offer a clock or trigger pulse for that modular backbone and sound. Despite the mono-only output, Roland did at least provide volume controls for each drum sound.

There’s still a lot of love for these units. They may not sound like drums but they do sound fantastic for electronic music, which you’d expect from a computer-controlled drum machine called Drumatix.