Packaged with sound from Roland’s classic drum machines and synths, this was the all-in-one machine that started the Groovebox name. 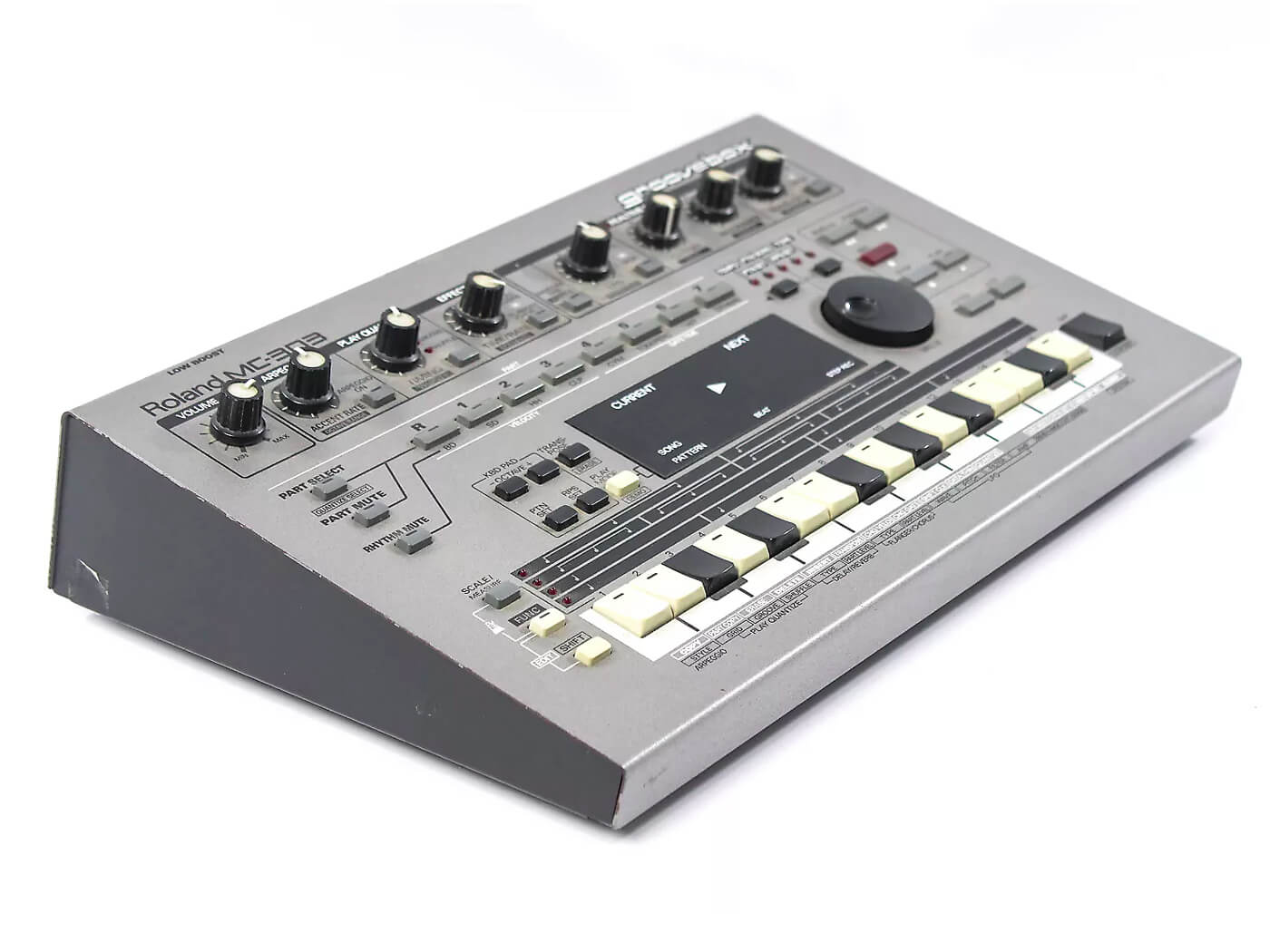 My first foray into music production was using a basic Roland Sound Canvas, a pretty static box with little to no controls. So I was excited to get my hands on my first proper piece of kit in 1996: the Roland MC-303. This thing was jammed with classic dance drum hits from the 808, 909 and more, and had synth sounds taken from the 303 and Juno. Better still, it had realtime controls and a built-in sequencer so you could make whole tracks on it. Would this be the machine that helped make me sound like the Chemical Brothers and Prodigy?

Alas, no. Although it had some great sounds, the MC-303 was a rompler, so it couldn’t compete with the genuine analogue kit used by my production heroes. Crammed into the box was a 28-voice sound generator based on the Roland JV-80, with 448 preset sounds and 12 drum kits. Although there were some decent patches in there, it had quite a dated sound overall, with only rudimentary editing and some simple DSP effects. It was, however, my first experience of tweaking a LPF cutoff dial while playing a synth arpeggio. I spent hours twiddling that thing with a grin on my face, so it wasn’t all bad. 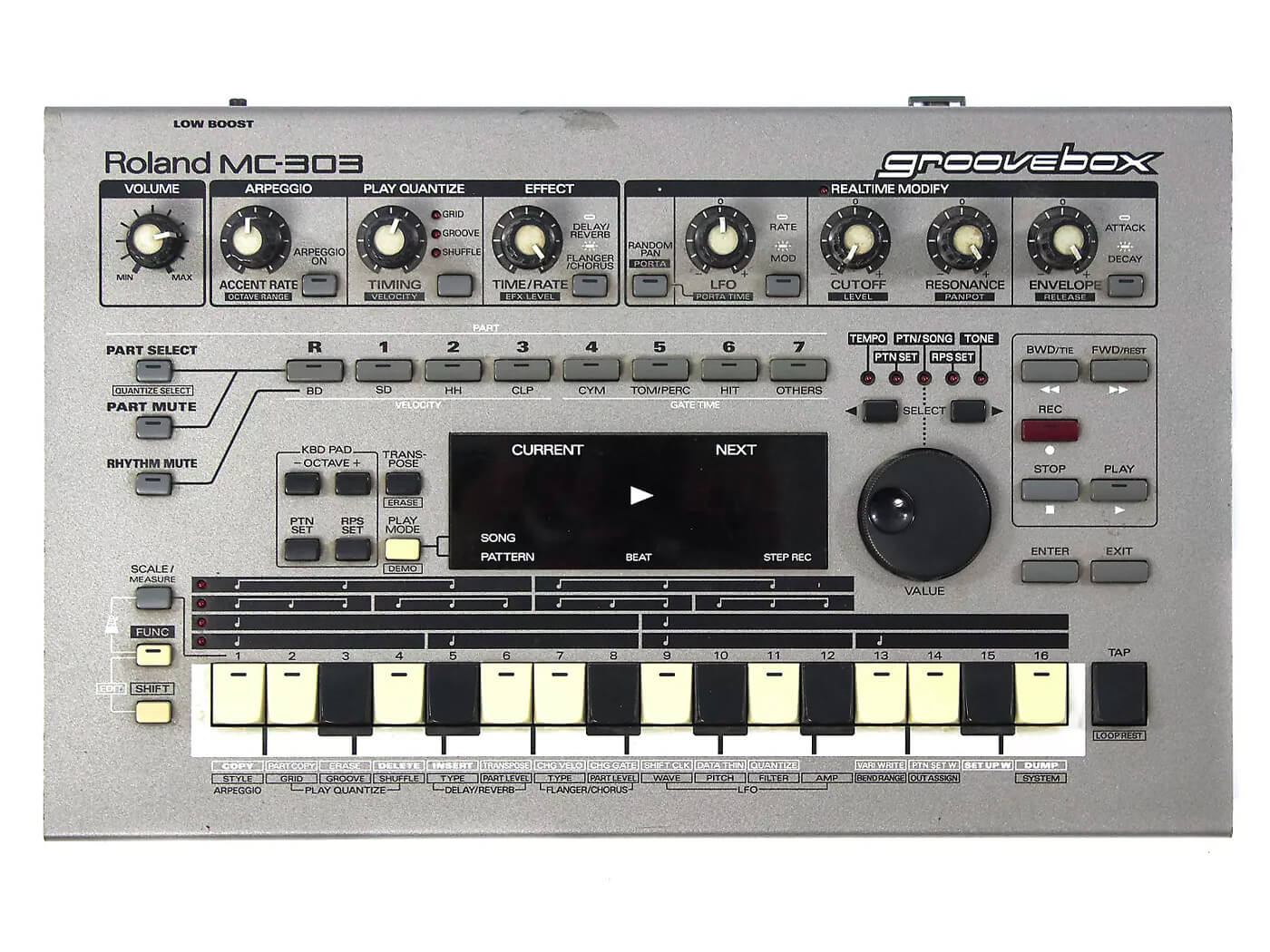 The front panel had buttons along the bottom that doubled as a keyboard and input for the step sequencer. Your songs could have one drum part and seven instrument parts, and you could mute and transpose them at will. There was also a surprisingly decent arpeggiator, a Low Boost Knob on the back, and a cool Realtime Phrase Sequencer that let you instantly recall and jam with phrases.

I spent quite a lot of time crafting songs by chaining together patterns, and I distinctly remember jamming away on it while a bored girlfriend sat on the other side of the room reading a magazine. Unsurprisingly, that relationship didn’t last, much like my time with the MC-303. Although it was a lot of fun, it was just too limiting, and despite Roland’s best efforts with the design, the small screen and complex button combinations were a pain. It wasn’t long before I bit the bullet and upgraded to a fully-fledged workstation and a hardware sampler.

What stood out with the MC-303, though, were the demo songs and patterns. This thing was loaded with them, but unfortunately, that meant there were more presets than user slots. Many of them could best be described as hyperactive Japanese hardcore. To be fair, some were quite good, but I recall most as being objectively dreadful.

Strangely, in revisiting the machine for this piece and listening back online to some of the demos and sounds, I hear them in a slightly different light. There’s a big resurgence in 90s rave music going on right now, which makes me wonder if the MC-303 might be the perfect machine to help capture that sound. When it was first released, it cost around £550, but today you can pick one up for £150-250 second hand.

Although several machines could be categorised as groove boxes before the MC-303, it was the first time Roland used the term, and it set in motion a string of releases and upgraded versions. The direct successor was the MC-505, which upped the voices, presets, effects and features, and you could even use it as an 8-track MIDI sequencer. One time I agreed to sit down with a friend to help them work out how to use it. How hard can it be if I’ve had experience with the MC-303? The answer, it turns out, was very hard indeed! Despite being a powerful machine, it wasn’t very intuitive, and we had to spend many hours poring over the manual.

Later releases included the MC-307, MC-909 and MC-808. Like the MC-303, they didn’t have any specific links with their original numbered namesakes, apart from being boxes with built-in sequencers and sound sources. Roland revisited the Groovebox name in 2019 with the MC-707 and MC-101. It’s clear from these new designs that a lot has improved in terms of technology and usability. I haven’t had a chance to try one myself, but I hope there’s an on-board demo that rivals the bonkers hardcore found on the original MC-303.