Faced with the conundrum of dragging analogue devotees into the early digital age, PPG rode the crest of a new wave… 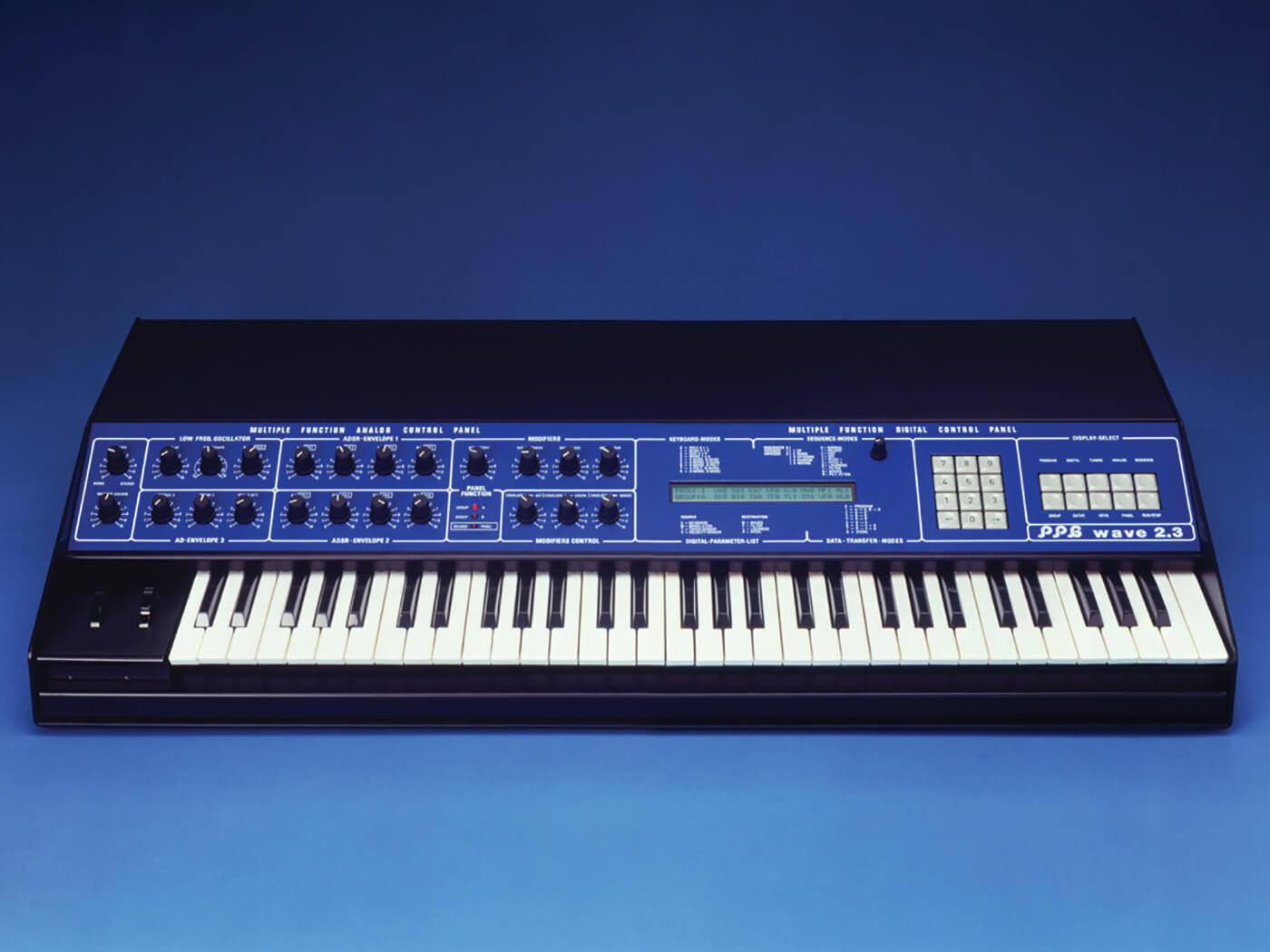 While a student at Music College, a kindly and respected professor offered to introduce me to a composer who was something of a musical hero. Paddy Kingsland had been one of the second wave of composers at the BBC Radiophonic Workshop. A timely trip to his post-BBC studio in West London afforded me the opportunity to meet-and-greet this esteemed musician, while also collecting a second-hand purchase for the college, namely his PPG Wave 2.2.

Once I had finished my hero worship, accompanied by the obligatory ogling of fashionable late-80s tech, I was left to bundle the Wave into the back of a London taxi. This was not easy; it was big and heavy, and unbeknown to me at that time, a synth that would go on to influence a multitude of contemporary synth designs.

While the intrinsic core of the Wave 2.2 was digital, it exhibited all of the facets of an analogue panel, bedecked with very familiar pots. LFO, ADSR and VCF were all present acronyms, nestling next to a two-line LCD display, accompanied by a chunky numeric keypad, lifted straight from an early Apollo lunar module, or at least that’s how it felt.

The PPG path to glory began in Hamburg, Germany, where designer and synth hobbyist Wolfgang Palm started his synth career by servicing and modifying analogue synths. By the mid-70s, Palm was producing his own products, and importantly began a relationship with the influential band Tangerine Dream. In 1976, Palm produced one of the first programmable synthesisers, followed two years later by the snappily titled System 340. This was importantly the first product to use the PPG Wave technology. The groundwork was laid for the Wave synth series, which underwent many revisions, increasing in numerical ‘points’ with each improvement, in much the same way that computer software would creep from one iteration to the next.

The Wave 2 was a pivotal machine, providing eight note polyphony from a single oscillator per voice. This increased to two oscillators per voice, with the revision to Wave 2.2, however the real crunch came from the oscillators themselves. Being digital and 8-bit in resolution, they could have been smoother in sound and clarity, but they did reveal Wavetable synthesis to the world, in a format that was tweakable and open to substantial modulation.

The first time I became aware of the full potential of Wavetable was with the Thomas Dolby track Windpower. This track utilised a strident synth colour which meandered and mutated in realtime, with incredible modulated consistency. This was a sound that the teenage me could not work out how to recreate on my own analogue synth. Hardly a surprise, as Dolby’s early digital weapon of choice was a PPG Wave with the accompanying alter-ego brain, known as the Waveterm. This brain-box was also available in two revisions, namely model A and B. The bright green VDU (Visual Display Unit, as they were known back then) was in part responsible for the Wave/Waveterm combo being considered the poor person’s Fairlight. Slightly unfair, given that the Wave 2.2  still had a price tag of £5000 upon release in 1982, and it didn’t even come with a Fairlight-esque light pen. Even so, it was equipped with two large floppy disk drives, which were downsized to 5.25 inches from the enormous 8 inch floppy disks, with revision from model A to B.

Even without the Waveterm, the Wave 2.2 was a real ‘players’ synth. With a five octave keyboard, which felt very clunky by today’s standards, the signal flow of the Wave 2.2 was pivotal. The starting point, of a digital oscillator, would allow access to over 2000 different single-cycle 8-bit waveforms. The crunchy and often tinny-sounding waves could then be tamed by the analogue filter, which in the case of the 2.2 was provided by the infamous SSM2044 filter chip. It’s this filter that provided much of the character of the 2.2, with so many parameters open to real-time manipulation while playing live.

PPGs demise came in 1987, largely due to rivalry from other digitally based products, such as the Yamaha DX-7 and Sequential Prophet 2000. From the ashes of PPG came Waldorf, with a string of innovative and highly regarded products, culminating in the recent release of the Quantum and Iridium synthesisers. These are the PPG Waves of the current age, with similar signal flow and sounds that truly inspire. You don’t have to look very far to find other modern synths drawing on PPG influence, sporting digital oscillators and analogue filters.