A nostalgic look at the Boss Dr. Rhythm DR-55 – a popular early programmable analogue drum machine which also took a turn in the spotlight with the mighty Depeche Mode. 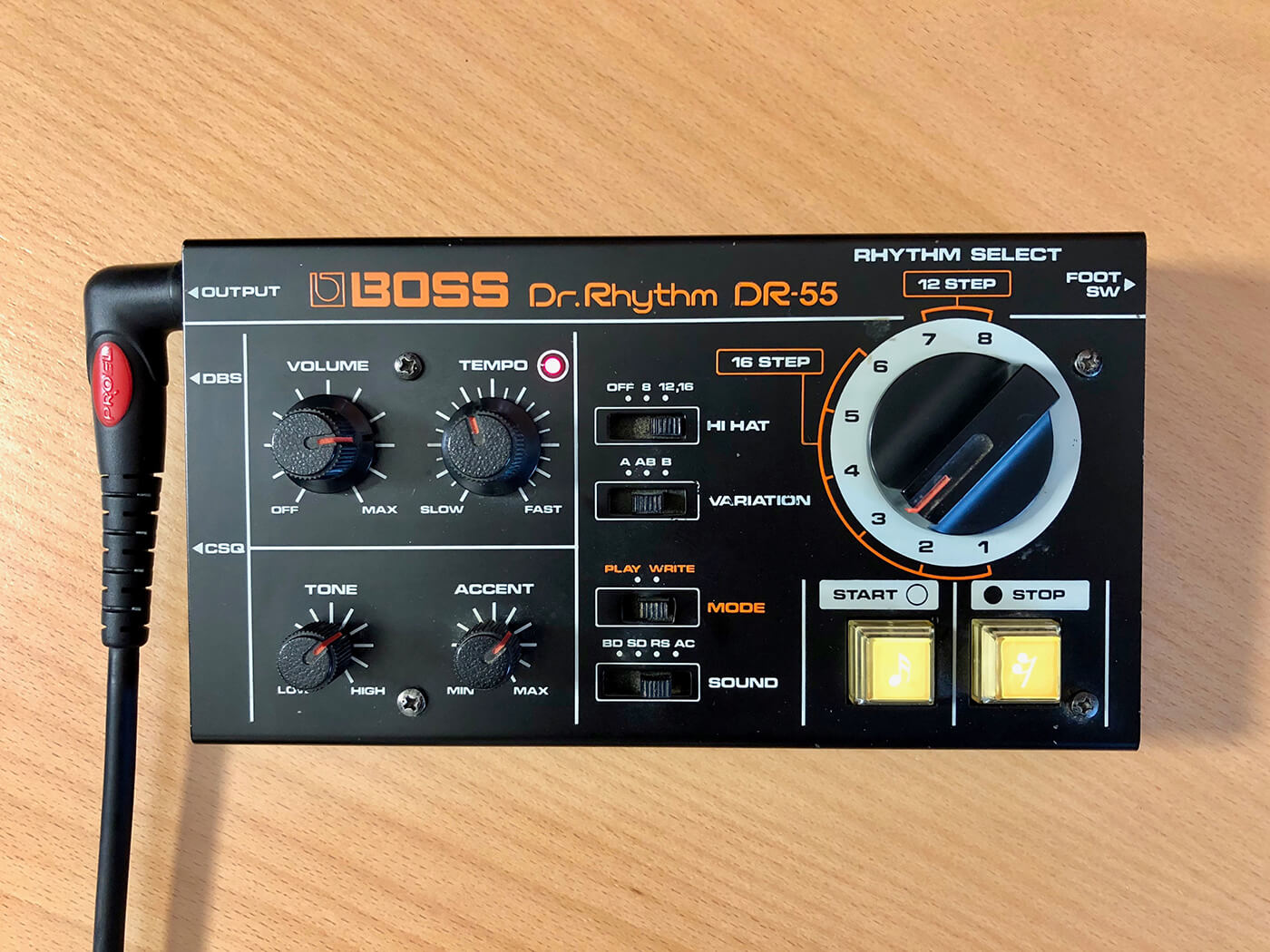 When it comes to drum machines, Roland has form; just about all of its TR-series drum machines have become iconic, with the seminal 808 and 909 leading the charge, of course, followed closely by the 606 and 707. But prior to the heady days of dance music, drum machines were loaded with very different responsibilities, often removing them from the studio altogether and placing them in a live environment.

It’s this purpose that may very well explain the very existence of the original DR-55. Monikered with the Boss branding, it’s firmly a design from the Roland stable, the Boss marque being forever linked with the guitar market, which might also go part way to explaining why DR-55s often ended up in guitarists’ rigs.

While Roland was conjuring up visions of machines taking over music – the TR machines were even described as ‘Rhythm Composers’ – the more humble DR-55 took on the more vocational qualification of ‘doctor’. Write your drums and have your cholesterol checked at the same time!

With its weapons-grade build specification, the DR-55 was a hefty bit of kit, weighing in at 0.8kg when laden with batteries – which you would have to have, as there was no other way to power it. This reassuring weightiness was matched with classy dampened pots, selection knobs and switches, all of which moved with an assured click. It was also equipped with a latched switch socket, allowing for the start/stop element to be handled by the performer remotely. This might also explain why the DR-55 that I bought myself, some years ago, was bedecked with a user-applied label to the rear of the machine, offering a setlist of what is best described as function-band fare. 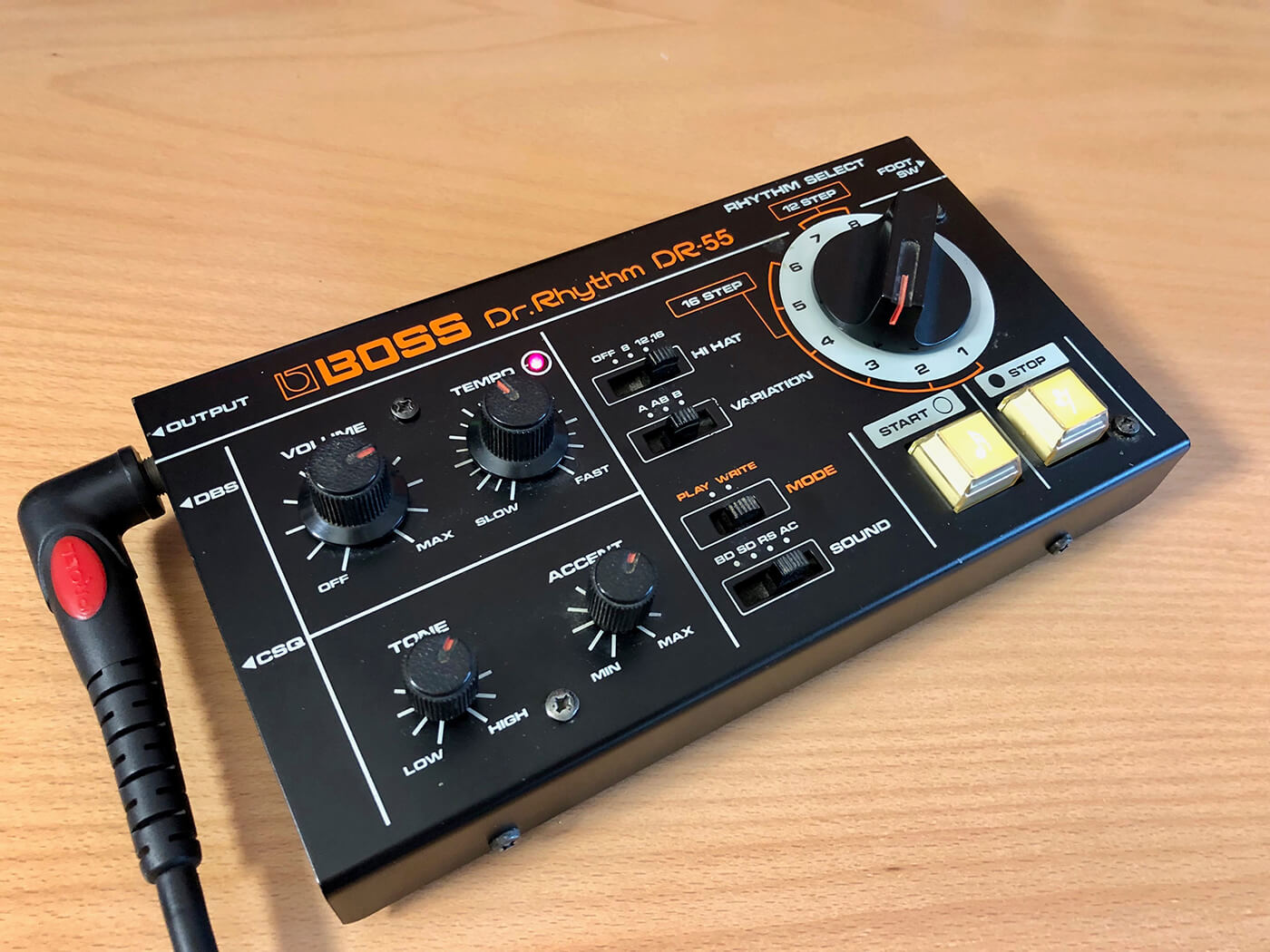 What’s the difference between a drummer and a drum machine? You only have to punch the information into the drum machine once! And punch the information in you did, as the DR-55 was one of the very first programmable machines, offering basic 16-step programming, which could be saved into a pattern and linked into a 32-step configuration, alternating from pattern A to pattern B.

It’s basic, and slightly clumsy to use, especially when compared to the latter Roland machines that offered a full complement of 16 buttons, which are firmly lacking from the good doctor. Yet this emphasises what it stood for – it was the first of a programmable breed of machine that could be used for basic gigging, although it was scarcely a substitute for that John Bonham drum sound.

Offering a mere four voices, bass drum, snare drum and rim shot could all be programmed, a single bar at a time, while the hi-hats would merely perform in a continuously straight eight- or 16-step configuration. There’s no balance control between the voices, with a simple filter-based tone control serving to tame the sharpness of the hi-hat top end, while all audio elements exit the DR-55 via a single mono 1/4-inch jack. It’s also entirely analogue, sourced from lightweight analogue sines and white noise. These offer similar confines to the Roland CR-78, but despite being far from the real thing, the DR-55 has a beguiling charm to people like myself.

Of course, placing it in the contemporary studio environment allows for all manner of mangling, but thanks to very limited synchronisation options, which only emanate outward from the box, you’ll not be syncing it to your DAW anytime soon. I did, however, manage to get my DR-55 to control the transport of my studio, which was an amusingly long way to spend an afternoon.

It’s far better to consider its place in musical history as that of a period piece, with Depeche Mode citing the good doctor as the first machine they used live. It was left to vocalist Dave Gahan to select one of the eight patterns and set the tempo, with the latter not being open to saving within a program. In a more conventional setting, if the drummer slows down, the guitarist might shout across the noisy stage – that won’t be the case when the doctor comes a-calling!