Mason: “It’s no problem throwing away 99% of the music you make”

Dutch genre-bender Mason tells us about the making of his third LP, Frisky Biscuits and why he loves sampling himself and ignoring trends 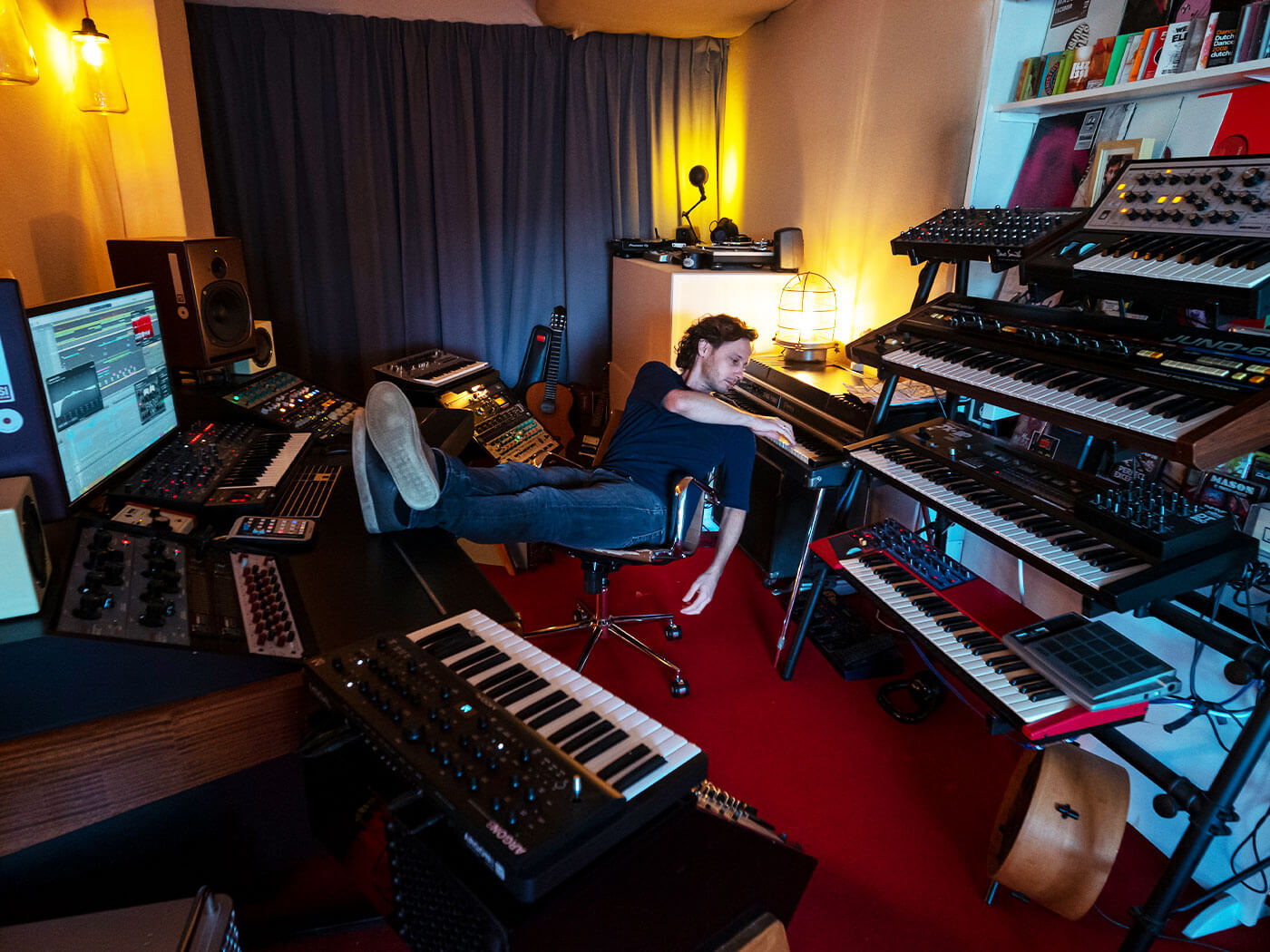 He might be best known for his 2006 electro-house chart-topper, Exceeder, but Mason makes no effort in following trends and charts. The Dutch producer has been DJ’ing and producing for over 25 years and still has an apetite for exploring quirky sounds and styles. Artist album releases are uncommon for Toolroom Records but Mason’s Frisky Biscuits was an irresistable snack for founder Mark Knight. “Mason sits in his own space”, he says. “He has his own identity. This album is a really creative and cohesive body of work – it’s a real listening journey, an experience.”

In Frisky Biscuits, Mason dives into disco, dips into Latin flavours and jumps in a puddle of funk while giving a wave to electronica. We find out how he did it during a COVID-19 lockdown, learn about specific techniques used in the album and why the devil’s always in the details.

What was the concept behind Frisky Biscuits?

I already had a few singles planned on Toolroom Records and once they heard all the other stuff I was working on, we decided to turn it into a full album. I make a lot of music in all sorts of genres but usually only release a fraction of it. Albums give me more freedom to explore different musical territory. 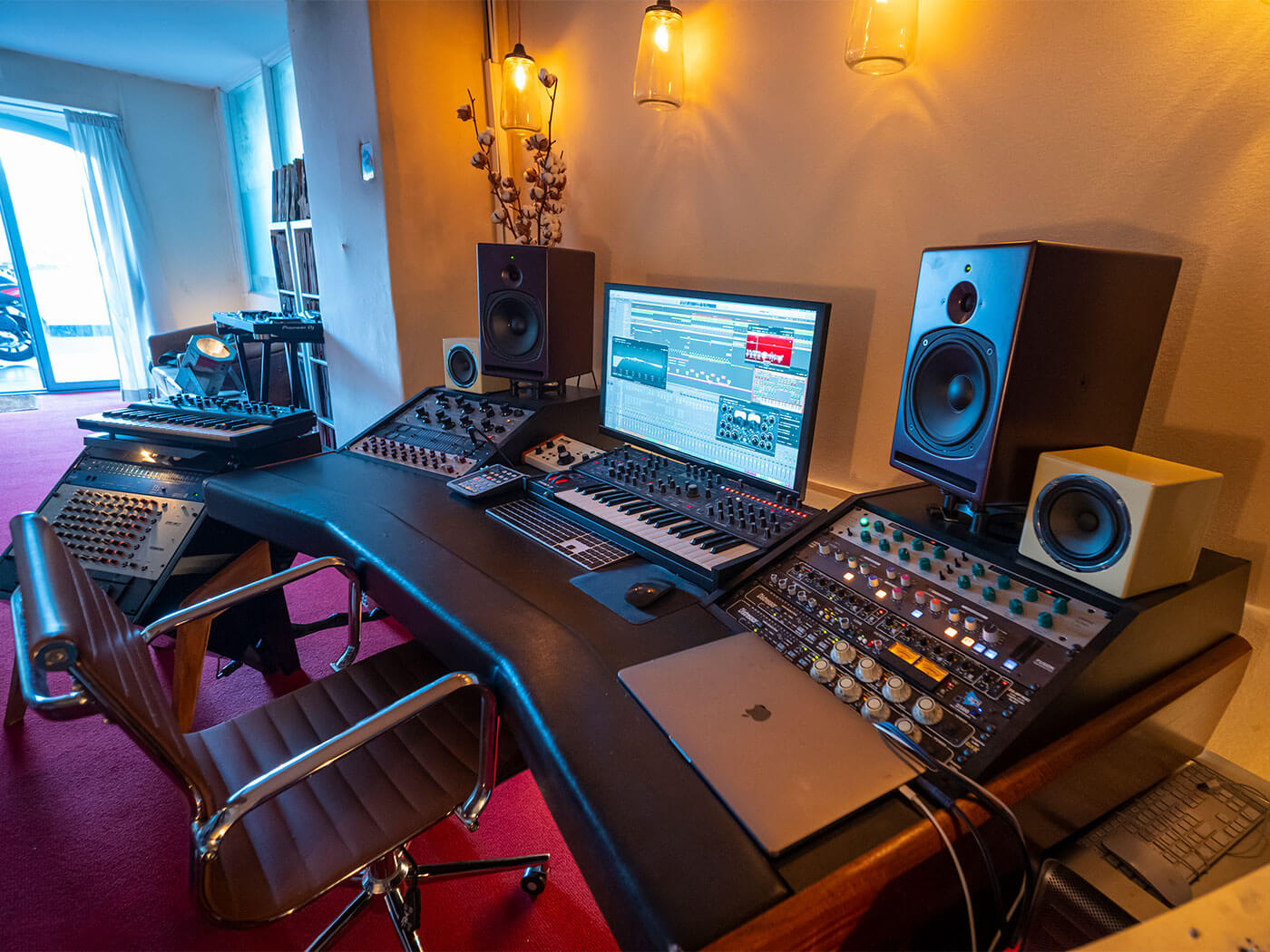 As this album was made during lockdown, how did your workflow and approach to music-making change when compared to Nite Rites?

It was the perfect project for lockdown. The outside world was quite miserable and I could just lock myself in and work on it non-stop from February until summer. It was nice to turn such a period into something productive and positive. I realise I’m in a privileged position to be able to do this and I’m thankful for that. We’re in tough times at the minute in the Dutch cultural world.

You have a lot of featured vocalists on the album. Were you surprised by how much you could achieve and record remotely during the pandemic or was it tougher than you thought?

A lot of these vocals I had already recorded in 2019 in Paris, London and Amsterdam studio sessions, so there was a good amount of material to start with. Obviously, throughout the process of the album, I needed additional takes, and new vocals and instruments recorded, so I have been doing remote sessions with artists. But it doesn’t beat the real deal, when you have a personal rapport, a good vibe and try a million things until a vocal sits right. That stuff isn’t as easy over the internet. 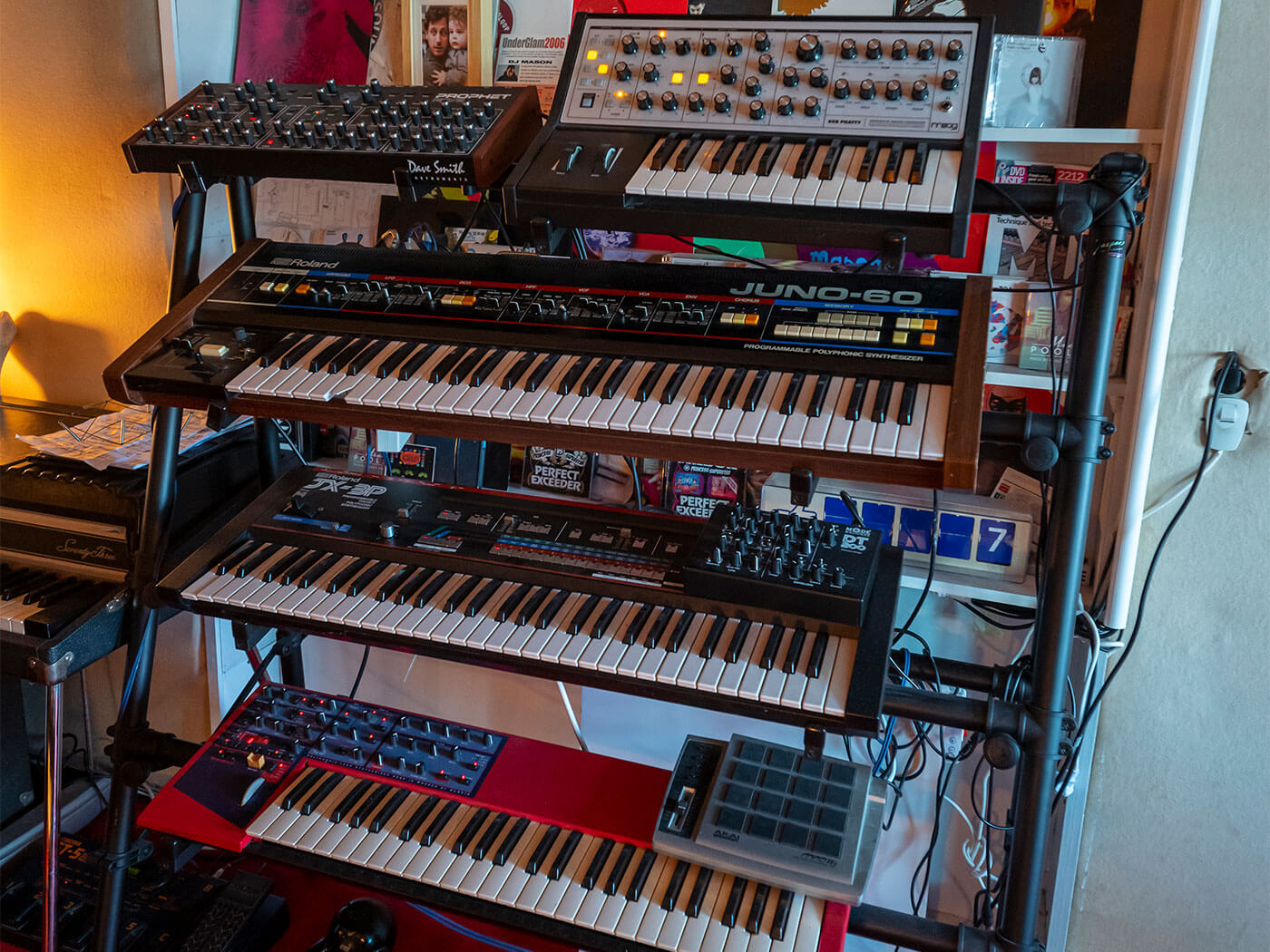 You blend genres throughout the album. One common theme is sampling. Do you have a go-to method for finding and processing samples in order to reinvent them?

You’d think so but I ended up having to clear very few samples. A lot of the material was either replayed ‘inspired’ by a sample or I’d make a 1970s-sounding groove and sample myself. If you trigger your own created audio file into a sampler, you get that sampled vibe even when you’re just sampling yourself.

The album’s first single, Loosen Up, has performed fantastically. Why did you gravitate towards female vocal duo The Melody Men?

I’d worked with them a few times already. We have a great connection, and they’re flexible and talented. In this case, the instrumental was already there and we’d been ping-ponging vocal ideas back and forth over the North Sea until it felt right. It was too much in tune at first – it needed to be offkey enough to be gritty.

We loved the tempo drop and transition in Flea Circus – it changes the song from a funky house tune into a hypnotic Eastern-style track. How did you think of that and how was it created?

I just mess around without much thought. I like the fact that with albums, there are a lot of intros, outros and transitions that you can do weird shit with. Not everything has to be radio or DJ-friendly, which is liberating. Dance music is too dogmatic anyway.

You worked with Birmingham MC Lady Sanity. Does the UK scene have much influence on your music?

It always has. It seems that European dance artists are either Germany or UK-focused and I’m definitely the latter. I’m working a lot with UK labels, have UK management and PR, and have worked with dozens of UK artists. Despite being married to a German, I also play in the UK much more than I do in Germany. 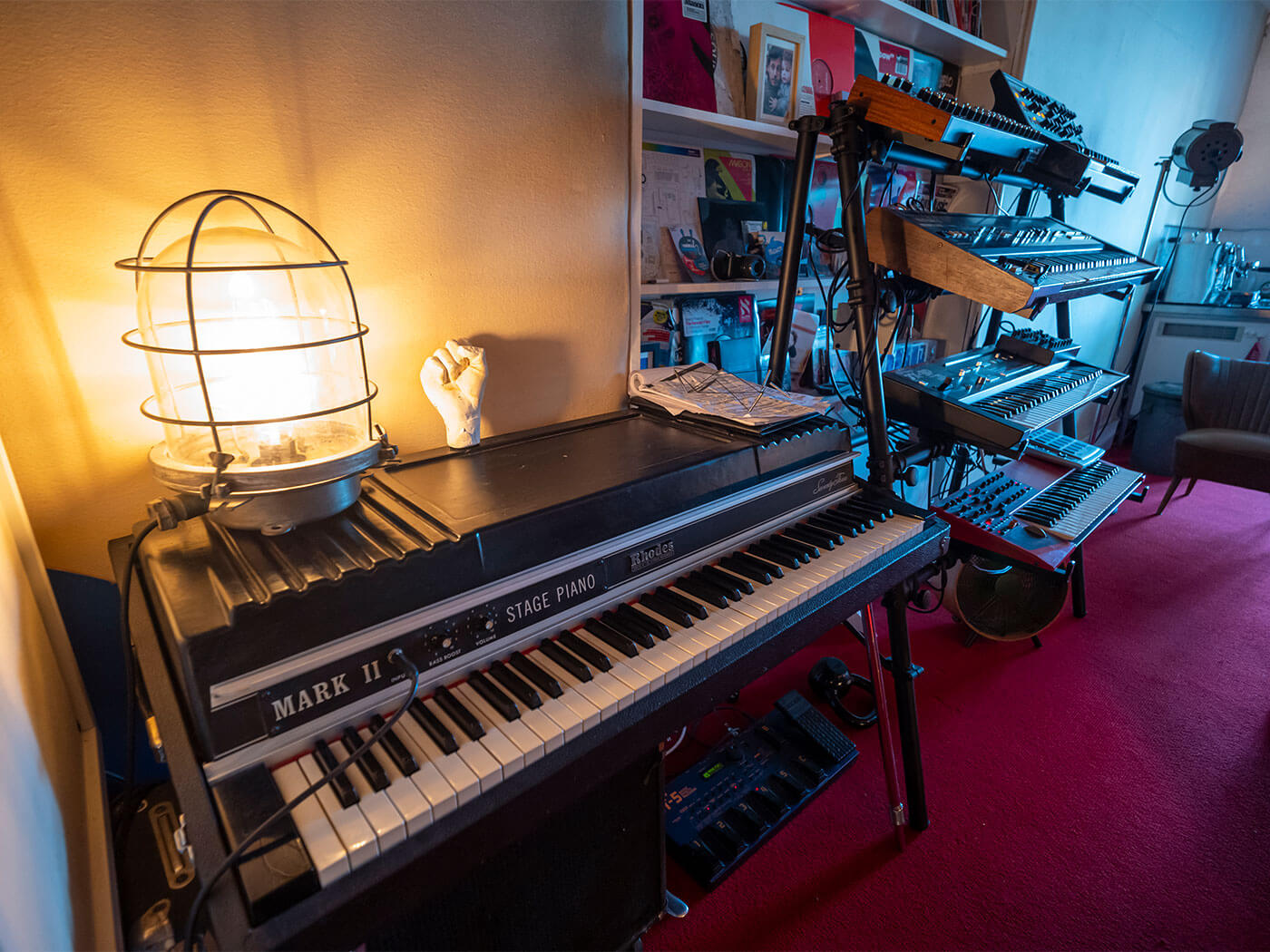 You’ve recently rebuilt your studio. Why?

The studio is never a status quo and is always a changing organism. My current set-up is a hybrid between in-and-out the box. All my Logic Pro projects get sent out onto 16 channels for my Neve summing mixer, which has a lot of hardware compressors and such connected to it via inserts. After that, it goes back into Logic through my master bus. I can switch between Logic projects within minutes and stay flexible but still have that analogue audio quality that I find hard to replicate in-the-box.

What is your favourite piece of gear? How was it used on Frisky Biscuits?

At the minute, it’s my Fender Rhodes. I’m not a good player by any means but I’m becoming addicted to figuring out jazz piano pieces. I played violin for a few decades, which helps with the learning curve. Keys find their way into my music subconsciously. There are definitely more of those parts in Frisky Biscuits than on previous albums.

You have an impressive hardware collection but what about software? What plug-ins are vital for your productions?

I’m a massive FabFilter fan, so those plug-ins are vital for my production work, as are a bunch of Universal Audio plug-ins. But it’s all about the cook and not the kitchen. You don’t need expensive hardware or plug-ins to make good music. It’s all about the ideas you have. It helps to stick to one DAW and become proficient with it so that you don’t have to think about the technical side of things too much and can just be creative.

You’ve been spinning vinyl for more than 25 years but you have a controller in the studio. Do you prefer vinyl or digital when DJ’ing live?

I DJ digital but avoid bringing a laptop on stage. Call me old-fashioned but I don’t like the look of DJs staring at MacBook screens. So I DJ with a regular Pioneer DJ setup and bring a Toraiz SP16 on stage for additional sequencing and loop triggering as an extra deck. 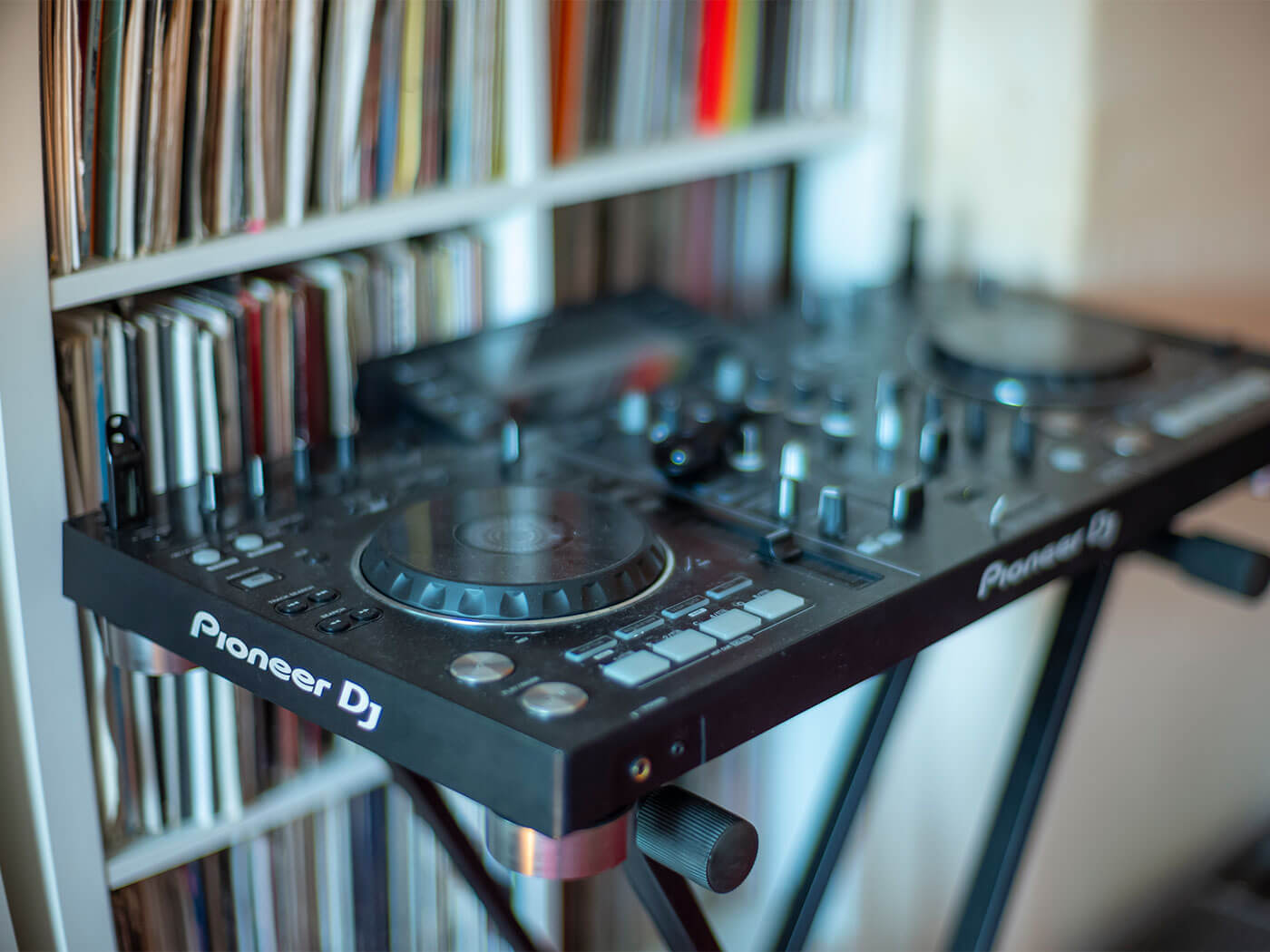 A lot of listeners may know you for producing Exceeder in 2006. What’s the story of this track and how did you use it effectively to build a following?

I had been DJ’ing and touring for a long time in 2006 when Exceeder came out but it was my third record ever released. I made it on my kitchen table with just a Mac, as I was between studios. Initially, it was a B-side for an Italo disco track I did called Follow Me. I felt Exceeder was too easy and predictable to be an A-side. But then shit hit the fan and I went into a non-stop touring lifestyle for a few years. I was unprepared for all that and had to improvise to get a team of managers, agents and publishers around me. There are a lot of things I would do differently now but, hey, that’s life. Regarding creating a following: those were still the MySpace days so I lost a lot of those followers when MySpace went down the drain.

Are there any signature production techniques you used in Exceeder that can be heard on Frisky Biscuits?

I remember that in the Exceeder project, there were shitloads of tiny automation tweaks per channel and I still do that; sometimes more than 20 automated parameters per channel. People probably don’t care but the devil is in the details.

Do you have any advice for aspiring producers and DJs?

I find that a lot of artists are too focused on what other artists are doing or whatever is trendy. Releasing music shouldn’t be a way to get more DJ gigs but an artistic expression. My advice would be to just do whatever you find cool and ignore the trends completely. And have no problem throwing away 99 per cent of the music you make. See it as training a muscle. Only the best 1 per cent will be good enough to be released and to contribute to what’s already out there.