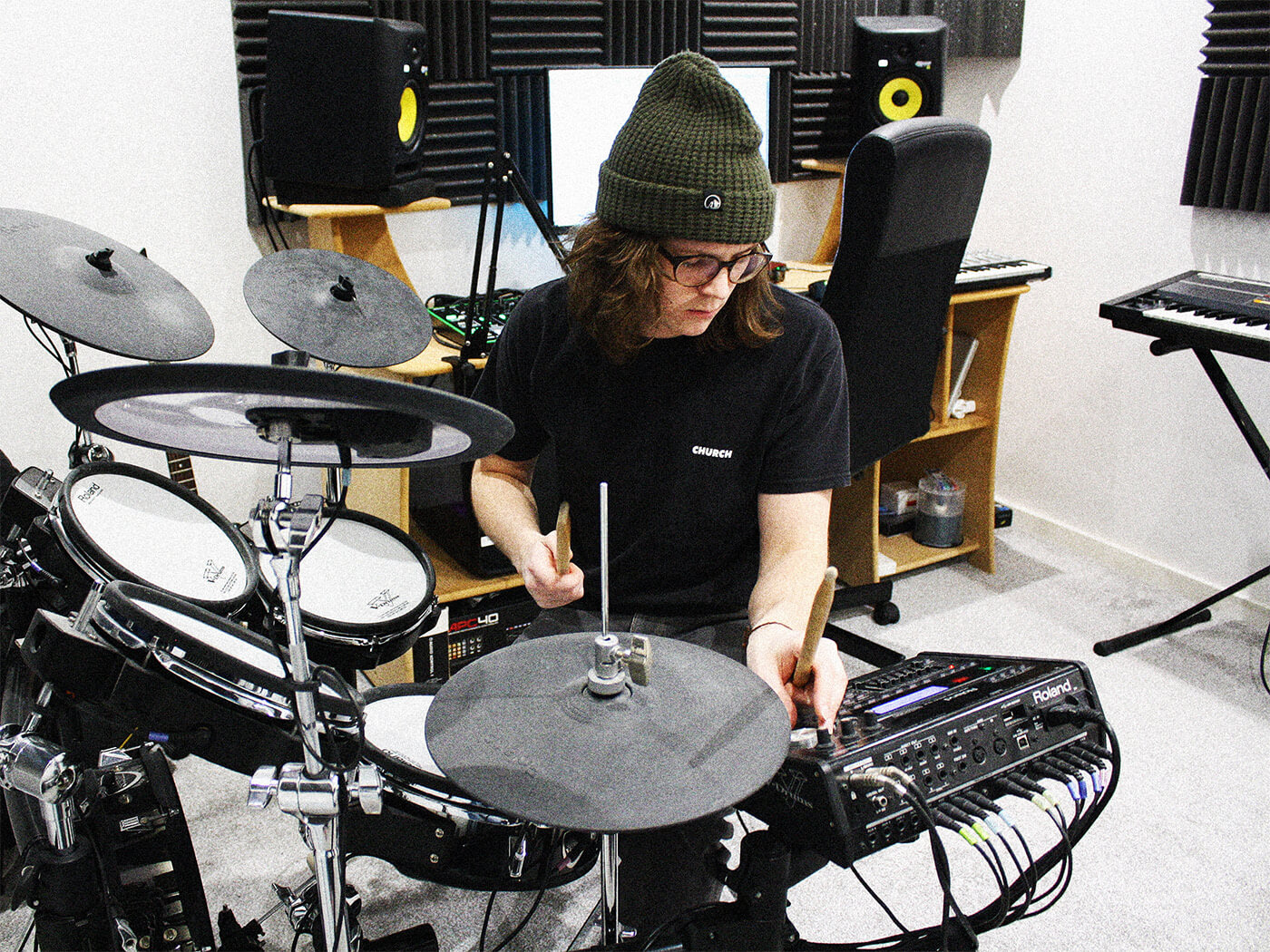 Loz Goddard: “I used to set myself deadlines for EPs but now I just make music when I’m inspired. There’s no pressure”

The UK producer on his shift from four-to-the-floor “tough ones” to his debut experimental, ambient-focused album.

“I’ve never been in a commercial kind of scene. It doesn’t really interest me,” he tells MusicTech. “The smaller you get, the better sense of community you get.”

Despite residing in tight-knit networks, the Mancunian producer has performed all over Europe and has clocked up millions of streams online. His debut album, Balloon Tree Road, out 25 February, may feel like a long time coming following a steady stream of successful EPs – but Loz has just been waiting for the perfect moment.

“I don’t like forcing anything,” he says. “If you do that, you end up with something that’s not completely true to you.

“I had three tracks, with one that took me two years. When I listened to that back, I was like, ‘I don’t want to release this on an EP. It doesn’t feel like an EP track.’ And everything I made after that track didn’t fit with it. So I thought, ‘I’m gonna save this for something on an album one day’.”

Though Loz’s musical career isn’t a full-time pursuit, he occupies a space that many music-production hobbyists strive for. In 2015, he was embedded in a deep house and disco house scene that exploded in popularity and paved the way for prominent acts such as Folamour, Mall Grab, and DJ Seinfeld. Loz, too, has benefitted. He’s now more than 100 episodes into his radio show, Downtown Groove Sessions, and has gained a boost from YouTube channels such as Slav House and Houseum, both definitive resources for loyal underground dance fans.

“Networking and going out to meet people has always been a help, and sending my music to mates that are already doing it and getting feedback. I try not to imitate who I like. I just make music that I want to listen to.”

After a lack of club nights over the past two years, Balloon Tree Road sees the 30-year-old producer and DJ depart further from house grooves and what he calls techno-oriented “tough ones”. Instead, the album is brimming with mellow synth arpeggios, 1980s-style strings and pads, dusty recordings of drums, and subtle basslines.

“[They were] my main inspiration to start making music,” he says. “I was returning and listening to that during the lockdown. Before [lockdown], I spent most of my time going out listening to club music and house and disco. I’ve not listened to it that much over the last couple of years. Whatever I’m surrounded by at the time ends up being what I make in the studio.”

Loz’s shift to ambient, experimental music has naturally seen a change in his production workflow. Where he previously dug through crates for funk and disco samples, he now keeps a keen ear out for field recordings, lays down beats with an electronic drum kit, and conjures luscious pads with his synthesizers.

“Nearly every track on that LP started as ambient pads, and then I added drums and stuff afterwards,” he says. “There are a few drum-break samples but it’s mostly live drums played over the top.”

The album’s seventh track, Orange Blue Green, was born of a phone recording sent to him from his partner during a walk in the rain. “She was walking along a canal under a tunnel and it was hammering it down,” he tells us. “It was just water droplets hitting the surface of the canal with this natural reverb in the tunnel.

“She was like, ‘Oh, I’ll get recording, this sounds good’. She sent it over and it was perfect. I’ve used two different parts of that recording in two different tracks, and both of those ideas started with that. I would have that playing and then have a jam around it.”

Loz steers away from the pristine, polished sound of pop recordings, favouring lo-fi textures and imperfections instead. He’s attracted to music where “the production quality is purposely bad,” he says. “That takes skill, as well. I’ve never liked music that sounds too crisp.”

He laughs and reassures us that we won’t see him recording outside with an entire mic rig, as he instead opts for his phone’s built-in mic.

Loz’s penchant for imperfection extends to some of his gear choices too. Alongside his Roland V-Drums – which he often EQs to reduce the high frequencies – is a worn Roland Juno-106 that still gets plenty of use. “It’s a bit broken but I use it to my advantage,” he says. “Some of the chips need replacing but it’s just a case of pissing about until it works.”

That said, Loz still relies on modern sound-design tools such as Spectrasonics’ Omnisphere, which he loves – “even [for] the presets”. Balloon Tree Road‘s sixth track, Sun27, also saw Loz whip out his 2014 Roland TR-8 for authentic 808 beats.

After 14 EP releases and various features and remix appearances, you might expect Loz to have a rigid, streamlined production schedule. Nope. Well – not anymore at least.

“I used to have a routine, back when I made [2015 EP] Loose Jams and all that stuff,” he says. “I dedicated Monday and Tuesday nights religiously to making music. And then any other time I could squeeze in. My mates would be asking, ‘You coming out tonight?’ Nah, I’ve got this to do.”

Loz used to create and work to his own deadlines, striving to wrap up tracks and EPs within self-imposed timeframes. Now, he’s relieved himself of such pressures and focuses on making music when he’s in the right zone.

“I’ve completely gone the other way,” he says. “When I feel like making music, I’ll jump in the studio and fire everything up. And it’s so much better. There’s no pressure anymore. I used to feel pressure when I’d see other people releasing stuff all the time. It was like, ‘Ah, maybe I should be doing the same’. And I just don’t care about that anymore. It’s so much nicer, honestly. And I feel like the musical output is better. Well, I prefer it anyway.”

This new free-flowing process has its merits. Though a few Balloon Tree Road tracks took two years to materialise, Orange Blue Green took only an hour – a timeframe Loz is so unaccustomed to that he wasn’t sure whether it would be right to include the song on the album at all. “That was the most natural track I’ve ever made. And it was the quickest track I’ve ever made. I just thought it felt too easy so I wasn’t sure if it would fit.”

Loz finds ambient tracks easier to produce – he can “just hit record sometimes and play it all in”. The less time he has to spend in Ableton Live’s Arrangement View, the more natural the process is for him.

Ableton’s Session View is where he gets most of his work done. Triggering clips and experimenting with sounds on the fly is vital to allowing his ideas to flourish.

“For the first evening in the studio, I won’t touch Arrangement View,” says Loz. “I’ll just piss about in Session View and get a feel for it. Then the following day, I’ll jump in [Arrangement View] and get everything pieced together. I’ll just be taking stuff in and out, muting things. I mean, I still use a mouse at the moment rather than a MIDI controller.”

So, how did the EP-weaving producer figure out which tracks were worthy of his debut album? “It’s hard to look past [the EP mindset], because I’d get three or four tracks together and it’d be hard not to send it off to a label for release. But I’ve realised that not all of your tracks have to be of a similar style and fit into an EP.”

Loz is proof that there’s plenty to gain from being regimented in pursuit of your goals. But Balloon Tree Road is also proof that unshackling yourself from those same pressures can be just as rewarding – if not more so.

Though he’s excited to release more albums and more EPs, this time Loz isn’t chasing a spark. He’s just waiting for it to come to him.

“I used to think that I needed to get three or four EPs signed and released a year. I’m not gonna have those thoughts again. As and when I finish something, and whenever it comes out, it’s all good.”

Loz Goddard’s Balloon Tree Road is out on Oath on 25th February 2022. Pre-order and listen at bandcamp.com.