Jonas Rathsman Interview – The Pull of the Dark Side

Jonas Rathsman has evolved from filtered house to darker electronics. Declan McGlynn joins the Swedish maestro in his new studio to talk gear and his ‘less is more’ approach The list of labels Jonas Rathsman’s name has graced includes some of the most respected in dance music. Imprints like Solomun’s DIYnamic, Damian Lazarus’s Crosstown Rebels […]

Jonas Rathsman has evolved from filtered house to darker electronics. Declan McGlynn joins the Swedish maestro in his new studio to talk gear and his ‘less is more’ approach 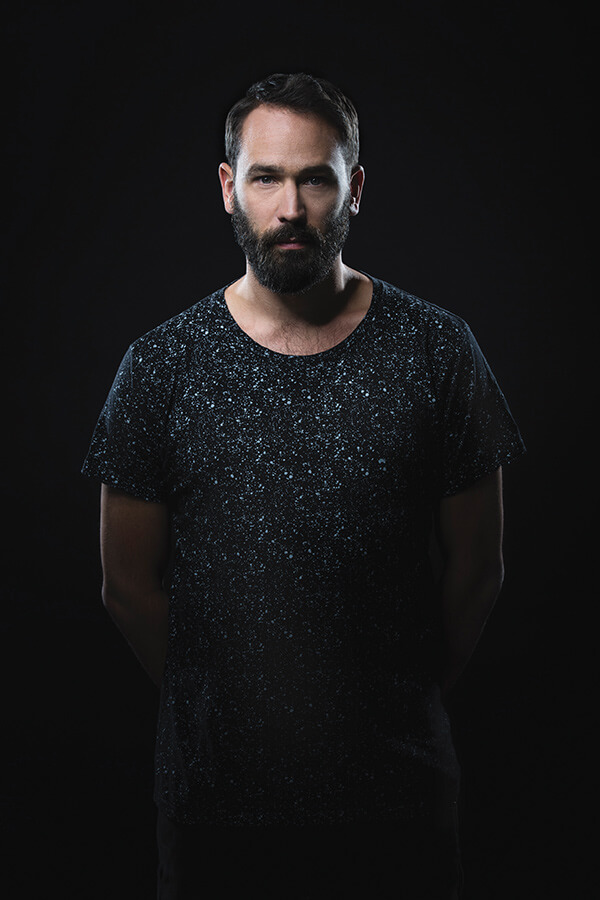 The list of labels Jonas Rathsman’s name has graced includes some of the most respected in dance music. Imprints like Solomun’s DIYnamic, Damian Lazarus’s Crosstown Rebels and Anja Schneider’s Mobilee – all renowned for their melodic, hypnotic and pulse-pounding releases – have dominated dancefloors across the world for a decade.

Rathsman started life on the now defunct, but much-loved label French Express, his Tobago EP introducing us to the disco-drenched, sampled-based, filtered-house sound he loved, but has since retired in favour of a darker, evolving, more atmospheric tone.

Tobago ended up on the office stereos of major labels who commissioned him for a series of remixes for huge names like Sam Smith, Disclosure and Booka Shade. In fact, it was Disclosure who made his track Wolfsbane the first release on its Method White, after witnessing it dominate a packed dancefloor at Space Ibiza.

His own mix series ELEMENTS – starting life as a catalyst to find new music – grew into a label of its own too. Now he’s opened a new studio complex in Gothenburg where, after a series of false starts, he’s built a creative community of producers and songwriters in his hometown.

From reason to Logic

Rathsman began as a young producer messing around in Reason, a software he never really bonded with. It was only when producer friend DJ Nibc – who has gone on to be an important mentor – showed him Logic Pro, that the pieces fell into place. Those early tracks may not have had the traction of more recent releases, but there was a blissful naivety to their sound.

“Back then it was really hit and miss but some of them sound amazing. I listen back now and think, ‘How the fuck did I do that?’ The difference was I’d just let things be. I wouldn’t process things too much, or add too many effects. Today I over-produce a lot, and have to go back because there’s too much information.”

Moving out of the box and focusing on some key bits of hardware, and assigning one piece of kit to one element of his sound have both helped Jonas refine his creative process.

“It’s a good thing to keep it very simple, in music but also in your studio set-up. I have my poly synth [Juno-106], I have my two mono synths, percussion, drum machines, and that’s it. I keep it at that level and don’t bring any more gear in as it’s going to confuse me. If I’m making a track and I need some sub-bass, for example, I go to the Moog [Sub37] and that’s it.

“It’d be so much harder if you had to choose from 12 VSTs that could all give you sub-bass. It’s much easier with fewer decisions to make. Maybe your tracks might sound a bit similar in the long run, but that’s also what adds up to your unique sound.”

Jonas’s workflow change was triggered in part by a move from his old studio space after an eviction notice left Rathsman and his Gothenburg gang homeless. The original space – the former Swedish National Broadcasting studios – was filled with creatives, with Jonas working in a former vocal booth-turned-studio.

“My old studio was really small, but it sounded really good. It had lots of acoustic treatment so it had a good vibe, so I wanted to re-create that in a bigger space. Now I have racks of synths and I just flick a switch and it all turns on, so it’s nice.”

The vibe was recreated in part with the use of the popular acoustic treatment measurement and reference plug-in, Sonarworks Reference, which takes measurements of your room with a series of recordings and calibrates an EQ curve to counteract any nasty dips or bumps in your room’s acoustic response.

“Even if your studio sounds amazing, Sonarworks helps a lot because you trust yourself a little bit more,” says Jonas. “You know what’s coming through your monitors is actually correct. You stop putting effort and energy into EQing things for hours and just let it be and move on to the next part of the production. When I first did it there was a big dip around 200Hz and another at 300Hz, so obviously we needed to work more on the treatment but it works for now.” 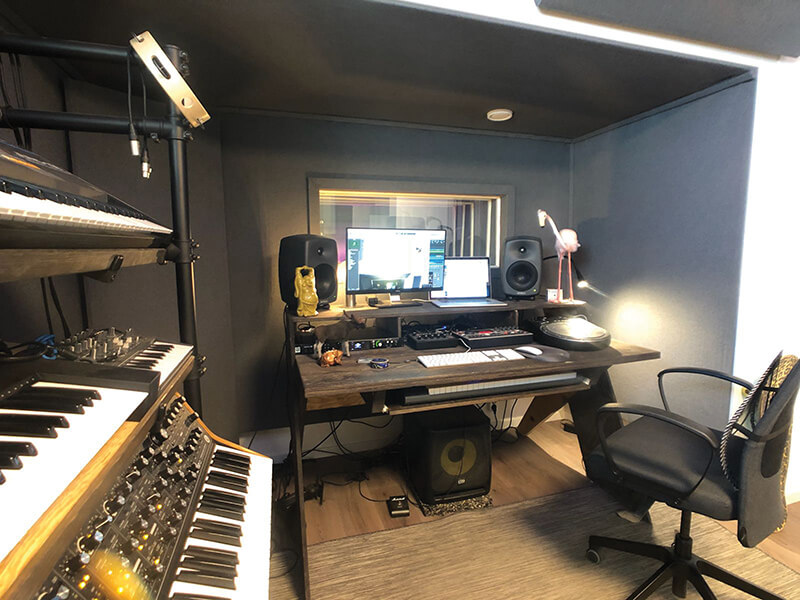 The former chemistry lab that became Rathsman and co’s new studio complex almost never happened – original plans for a more bespoke set of spaces were pulled at the last second.

“The first idea was to buy a shipping container each, which we actually did. We had this acoustic architect design some blueprints for the studios inside the containers. He actually built a studio for ABBA back in the 70s. We had it all good to go, but we lost the contract at the last second and we had nowhere to put the containers so we had to sell them off and come up with a new idea. That’s when we found the old chemistry lab. The guy who owned it told us he could build a studio for us and he was looking for tenants.”

The gear that makes up the new studio is centred around a couple of unique pieces. There’s an Expressive E Touché hand-controlled expression pedal, designed for complex modulation from a single controller, and also a Roland HandSonic HDB-20 percussion pad which is at the heart of Jonas’s tracks.

“I’ve used the HandSonic on every track since I bought it,” he says. “I just record the audio with no MIDI. Having something to play by hand is important – it doesn’t even sound that natural or realistic, and it doesn’t matter if you make mistakes. It’s really simple and you can layer percussion and create your own loops in a very easy way. It’s great for starting a project and it’s very immediate.”

That tactile approach to music-making, and the need to commit to the sounds and rhythms early in the process led Jonas away from the sample-based disco sound and into something more expressive.

“Also my tastes changed – I wanted to make it darker and simpler, with not as many disco flavours in it. I still wanna have melodies and some soul, but I’ve moved away from the sample-based disco sound. I still enjoy it, I still listen to it, but it’s just not something I wanna play anymore.

“If I’m stuck with something for too long, I get bored with it very easily. When you’re producing and DJing constantly, the only thing you’re doing is listening to music all the time, day and night. I need the music to change – I can’t listen to techno for 30 years! It’s just a natural thing for me, I need to have something new and fresh.”

Jonas says he listens to different types of music, thinking “‘How can I make my music more interesting? What can I add that no one else is doing?’ That’s the everyday fight. The answer is always to follow your intuition; follow the first idea. If you think this is good, just do it! Don’t over-analyse it. Try and finish the track, at least, and then you can analyse. You have to be quick about things – it’s not the easiest thing, but if you stick to your first idea it’s easier than trying to change it to suit other people’s taste.”

With such a varied influence, Jonas’s diverse reCord box means he’s able to adapt to pretty much any situation, but always finds himself leaning back towards the deeper and darker side.

“My DJ sets are all over the place. I try to adapt because the DJ needs to read the environment and the night, but I feel like I can do a bit of everything. The sets I enjoy playing the most are the ones that are connected to ELEMENTS somehow, where there are no boundaries and you can do whatever you want. 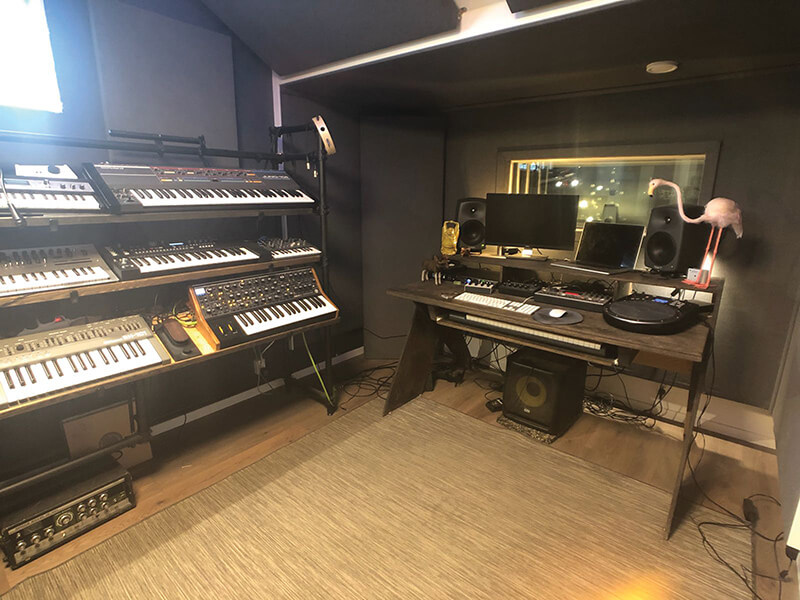 “Sometimes you get booked and you feel like the promoter knows who you are and about the label, and that’s very comfortable. Other times it’s not a great booking for you, or it’s harder to do what you want. I played before Fatboy Slim at Pacha in Ibiza a few weeks ago and you just can’t do an ELEMENTS set there.

Another way Jonas keeps things fresh is through ELEMENTS, his label that began as a mix series, inspired by the collaborative days of French Express. It’s both a reflection of Jonas’s tastes and his DJ sets, as well as a platform for new music that he’s excited about. It now sits at 17 episodes and has had over 400k plays.

“It’s a nice way to keep updated with new music. It’s easy to get lazy when you’re tired and you don’t wanna chase down music, but now I have to put the effort in. We got so much sent to us, and a lot were unsigned. I just thought, ‘If I don’t sign it, someone else will’. That’s when we decided to launch the label.”

As we wrap up, we wonder aloud what advice he would give his 2003 self.

“You need help – you need to learn from someone, you need a mentor. My mentor was Fredrik [DJ Nibc] and the club night I ran was my mentor as a DJ. You need to find help and don’t be afraid to start something by yourself. If you wanna DJ somewhere but no one will book you, go to a bar and ask if they want to have music every Friday. Do your own thing and trust your intuition.”