Joe Hertz: “The sound I’m looking for is inspired by music of the past, delivered in a new way”

Having made his mark on YouTube music channels like Majestic Casual and TheSoundYouNeed, Joe Hertz continues to blend elements of hip-hop, neo-soul and dance music in his debut album, Current Blues. The young Londoner – also the son of DJing legend, Pete Tong – carved out his place in the scene from his bedroom before moving into […] 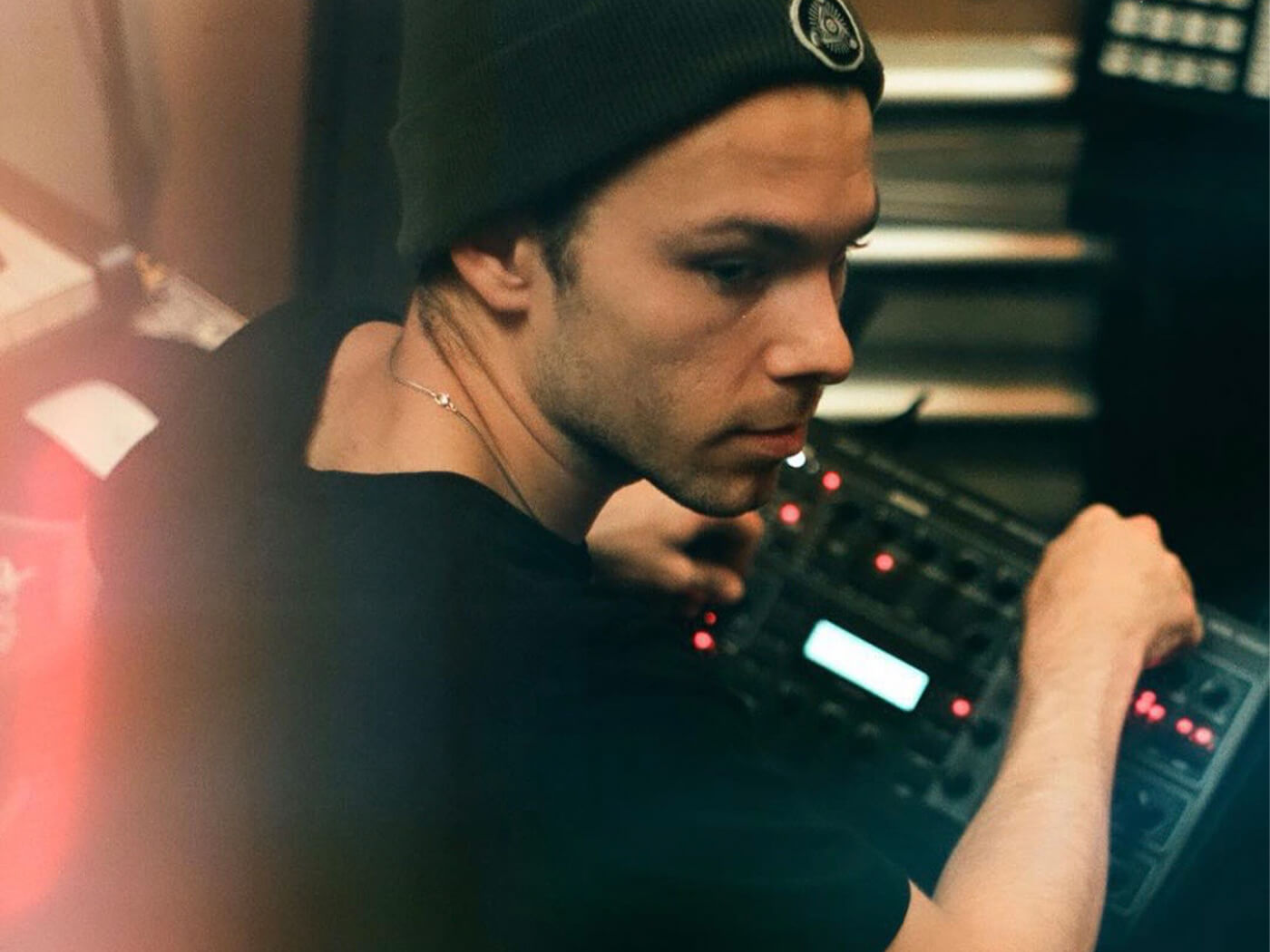 Having made his mark on YouTube music channels like Majestic Casual and TheSoundYouNeed, Joe Hertz continues to blend elements of hip-hop, neo-soul and dance music in his debut album, Current Blues. The young Londoner – also the son of DJing legend, Pete Tong – carved out his place in the scene from his bedroom before moving into a studio, armed with some iconic synths and a lust for crafting palettes of hazy sounds. He invites us in to elaborate on how his instruments and upbringing informs his process and production techniques.

Hey Joe, congrats on releasing your debut album, Current Blues. A vocalist is featured on almost every track – how do you approach collaboration with other artists?

I think there’s a certain amount of give and take when it comes to collaborating. I think it’s important to really know where that person is mentally on the day you are writing. It’s always good to properly catch up about everything that’s going on in each other’s lives. I feel this leads to better writing in general because you end up on the same wave together. Most of the recording for the album was done in my studio in London, however, I also did some tracks more remotely as I have worked with a couple of artists overseas too.

How did your creative process change in the face of creating an entire album?

I honestly don’t like to think too much about where a song is going to end up being when I’m making music. I feel that naturally over the years I have focused on a certain feeling which ties a lot of my music together, regardless of the genre. In that sense, I didn’t, at any point, draw a line under my old stuff and decide to write an album; it was more a case of whittling down beats/ideas and deciding on which ones felt good to develop together as a project. 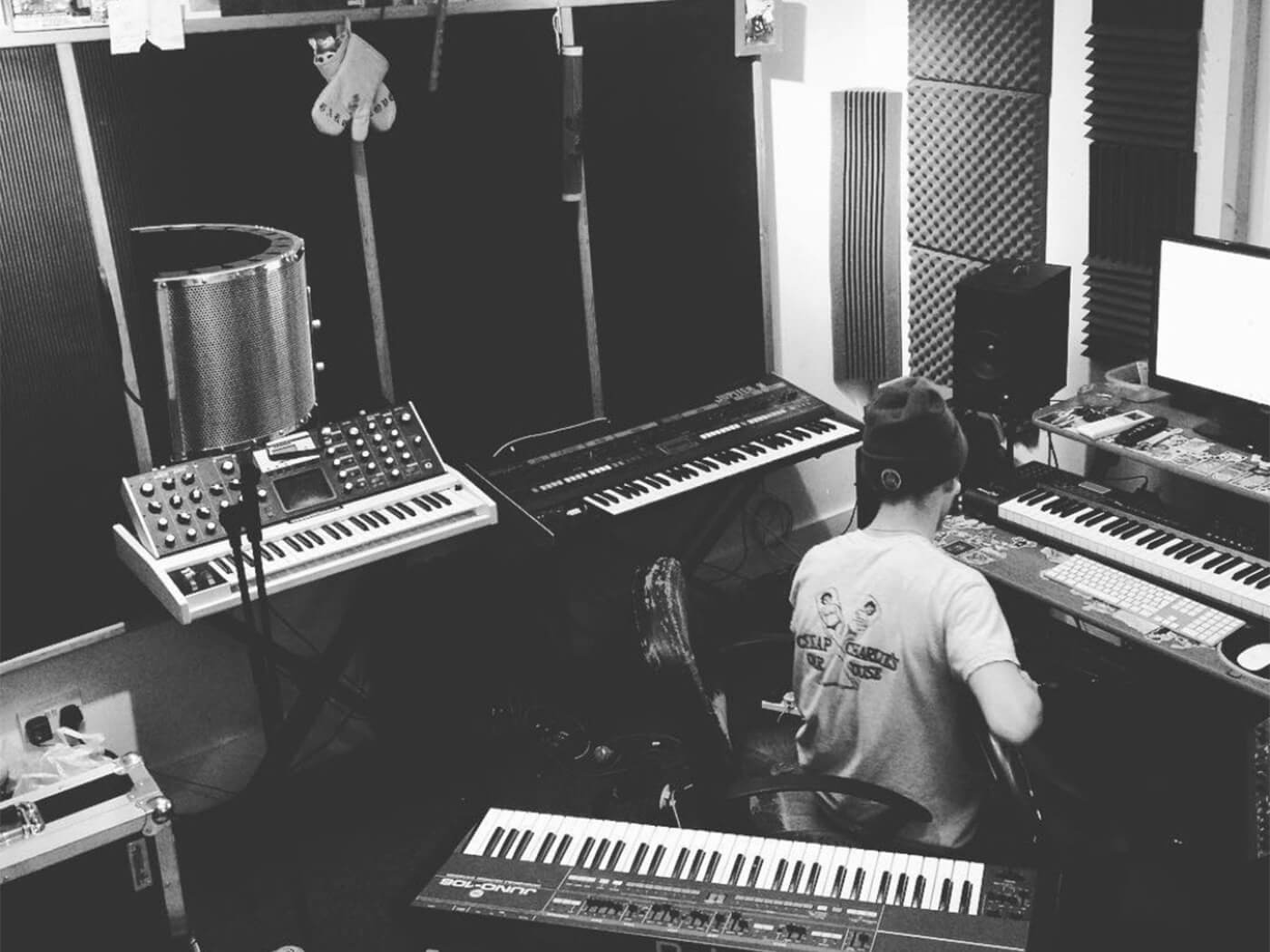 You just moved out of the studio you were in with Franc Moody – what’s the new studio like?

Indeed! It’s the end of an era in that place. The room I have been in for the last few years has served me well – my best music has been written in there. It’s always hard to step away from something that you know so well, but it felt like time for a change. Franc Moody and I have been next door to each other for the last few years, and have worked closely together on each other’s projects: helping each other out with production, mixing, recording and vice versa. It just felt logical to look at sharing another space together. We have been very lucky to jump on a newly refurbished room at Damon Albarn’s studio in West London. Huge upgrade. It’s got a live room! 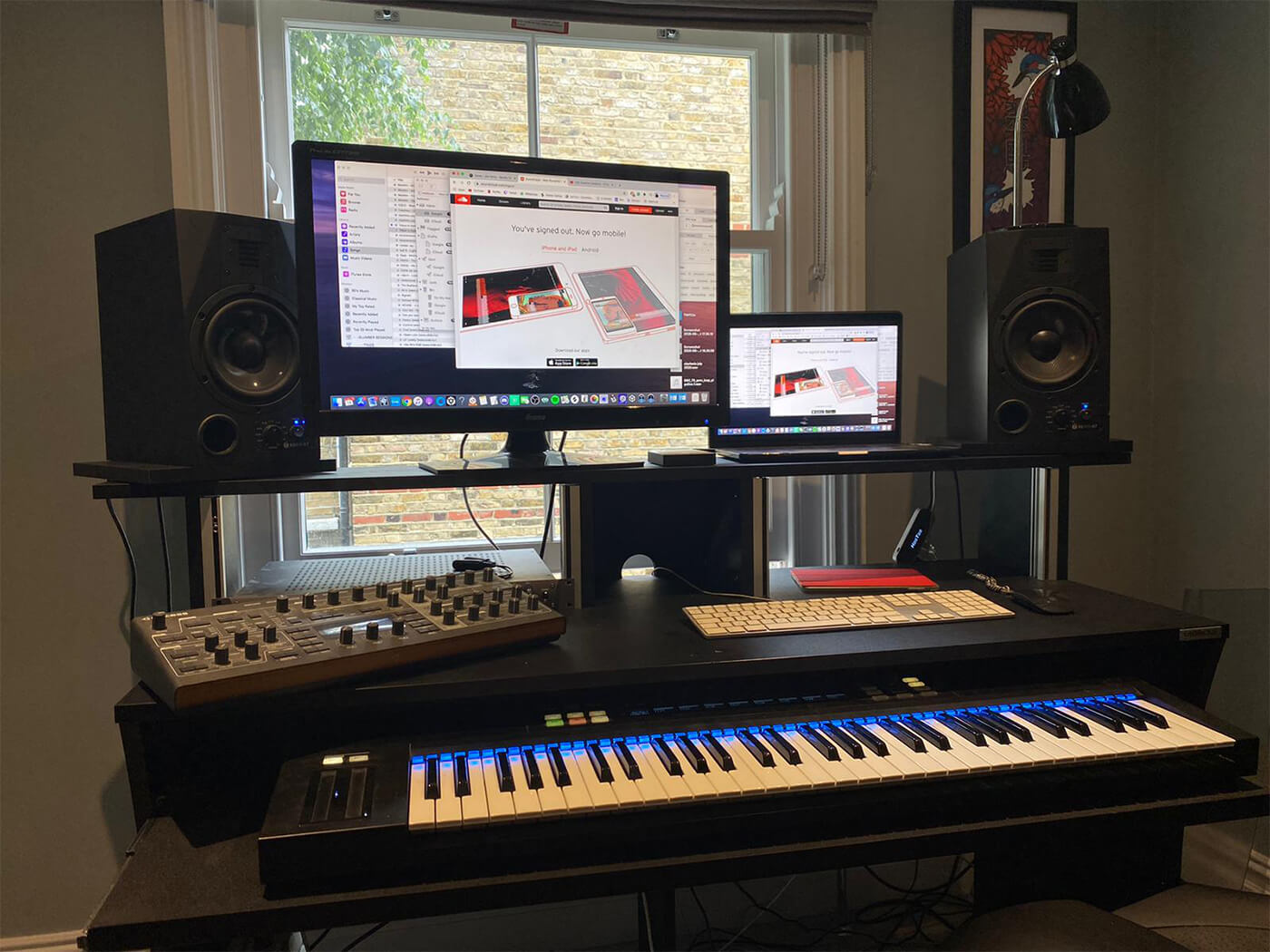 Your music has always been fairly synth/keys-focused. What draws you to these kinds of sounds?

I take a lot of inspiration from soul and funk progressions. I’ve always been drawn to music which uses interesting progressions and extended chords. The use of synths and keys comes down to me being a solo artist trying to recreate the fatness of many instruments. The sound I’m looking for is inspired by music of the past but delivered in a new way.

Which of your vintage synths is your favourite?

The Roland Jupiter 8. For years, the one in my studio has had a dodgy battery – every time you turned it on it would forget all its patches and everything sounded like R2-D2. I had to load the patches every time via tape memory, so we always had the internet dial-up sounds going in the morning to get all the patches up. But once it’s working it’s a beast! There are some issues with the tuning but to me it’s wonky in all the right places. I like working with audio; I try to play things live and tidy them up afterwards.

Although not vintage, it’s on its way to becoming one- I think the Access Virus TI2 should get a mention here. It’s been my go-to synth for years and was used heavily on the album. It’s just an all-round versatile force of nature. The only issue is that Access won’t update the firmware to work with the latest OS X so I don’t recommend buying one, sorry!

“Although I’m not using an MPC, the goal is the same – to create a groove that’s more humanised”.

What kind of plug-ins are being used in your album?

I would always recommend the latest Native Instruments Komplete to anyone. It is as solid as they come in terms of plug-ins. Regarding soft synths on the album, I used Spectrasonic Omnisphere, U-he Diva and Monark (Reaktor). I have also been loving Arturia‘s Analog Lab, there are loads of amazing emulations of vintage synths. SoundToys bundle, too! I also used some UAD plugins, one to mention is the Ampex ATR-102.

Organised chaos. As aforementioned, I prefer to work with audio instead of MIDI/drum programming software. This just lets me do what I want with no boundaries, and elements can be changed further down the line. In terms of groove, I use quantisation as a guide, but often like to work more off the grid when it comes to programming drums. I’ll listen to something on a loop and shift things around until they feel like they hit a bit different. Bouncing down and committing is key; the results can then be chopped up and rearranged. Honestly, a lot of the best things I have made came from stumbling across things using this technique. 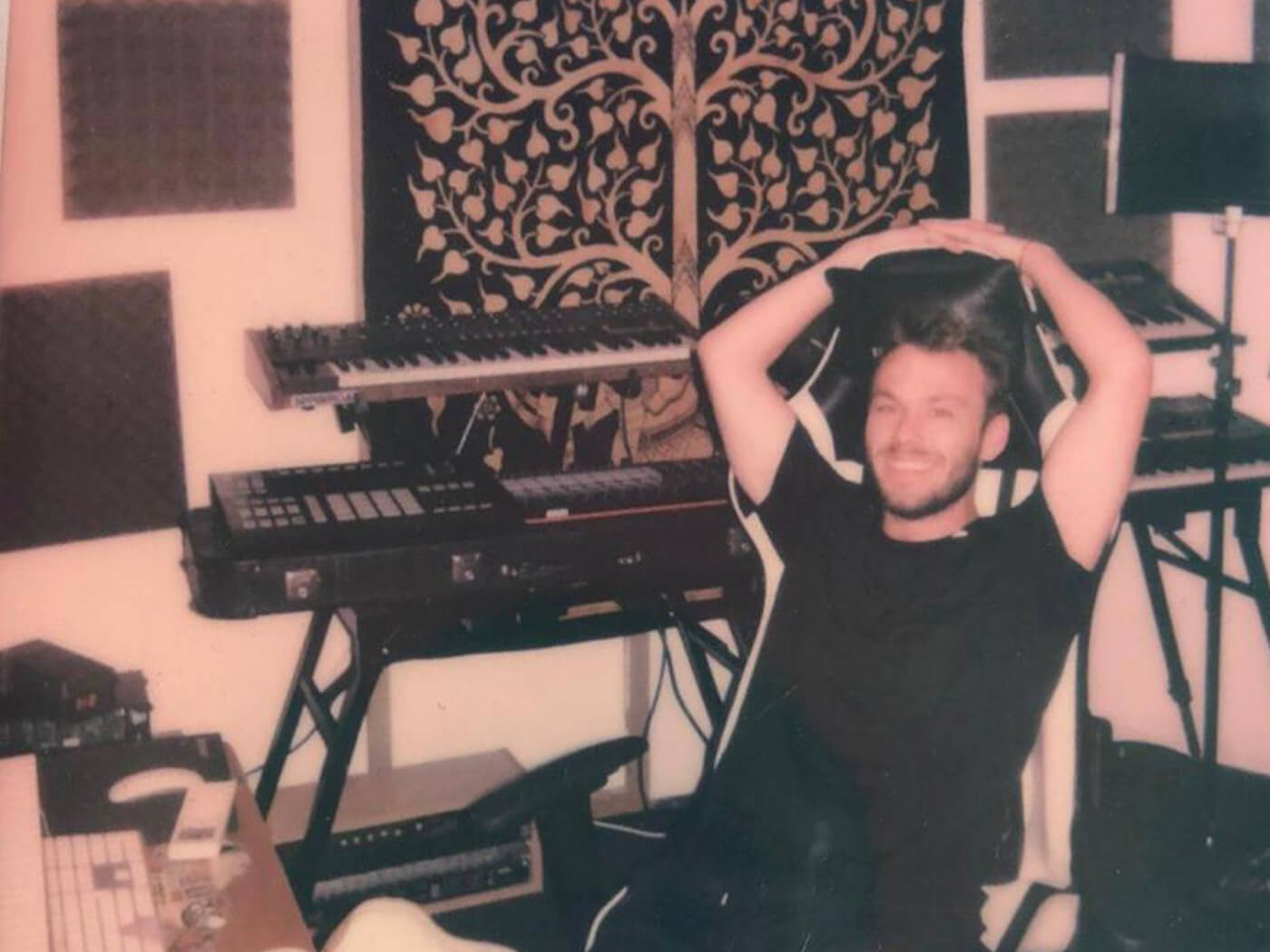 You’ve cited Dilla, Nujabes and Daft Punk as your inspiration. These guys are sample-wizards, while your music is all your own material. What elements of their music find their way into yours?

In terms of Dilla and Nujabes, although I’m not using an MPC, the goal is the same – to create a groove that’s more humanised. In terms of Daft Punk’s inspiration, I resample elements within my own music. For example, rather than having a synth playing a basic MIDI progression, perhaps bounce the idea, and chop it up and rearrange it.

The final track, Deep End has a bit more of a lo-fi house vibe than the rest of the album. What was the inspiration here and what different processes/gear did you intentionally make use of?

This track was written at the beginning of lockdown, and it was generally a different feeling than I had from making the rest of the album. I wanted to include something that connected where I am now back to the nostalgias I grew up on. When I was making this track I was thinking of playing Streets Of Rage 2 on Sega Genesis. I used the Prophet 6 for the main synth sound. I also used a lot of saturation and distortion on the drums and some of the synths to give it that lo-fi vibe.

We’ve been followers of yours since the Majestic Casual / TheSoundYouNeed ‘boom’. Now that the YouTube music blog scene has subsided a little, what do you think is the best platform for getting your music out there?

You have to think along the lines of using social media like TikTok, Instagram and Twitter. There’s a lot of users and people that can easily communicate and see what you’re doing there. People send me music all the time and I’ve come across some amazing unheard talent that I will be promoting in the future. Spotify playlists are also becoming increasingly important.

It’s not really a secret that you’re the son of Pete Tong. Whilst he’s made his name in DJing – a slightly different world to yours – what early influences and lessons did you learn from him that have put you in a strong position now?

I think an open-minded outlook on music; understanding what people are listening to and wondering why – these have been questions I’ve been trying to figure out since I was a kid because of my dad’s influence. It’s also shined a light on some of the aspects of being successful in music and also being part of a family which isn’t always easy! 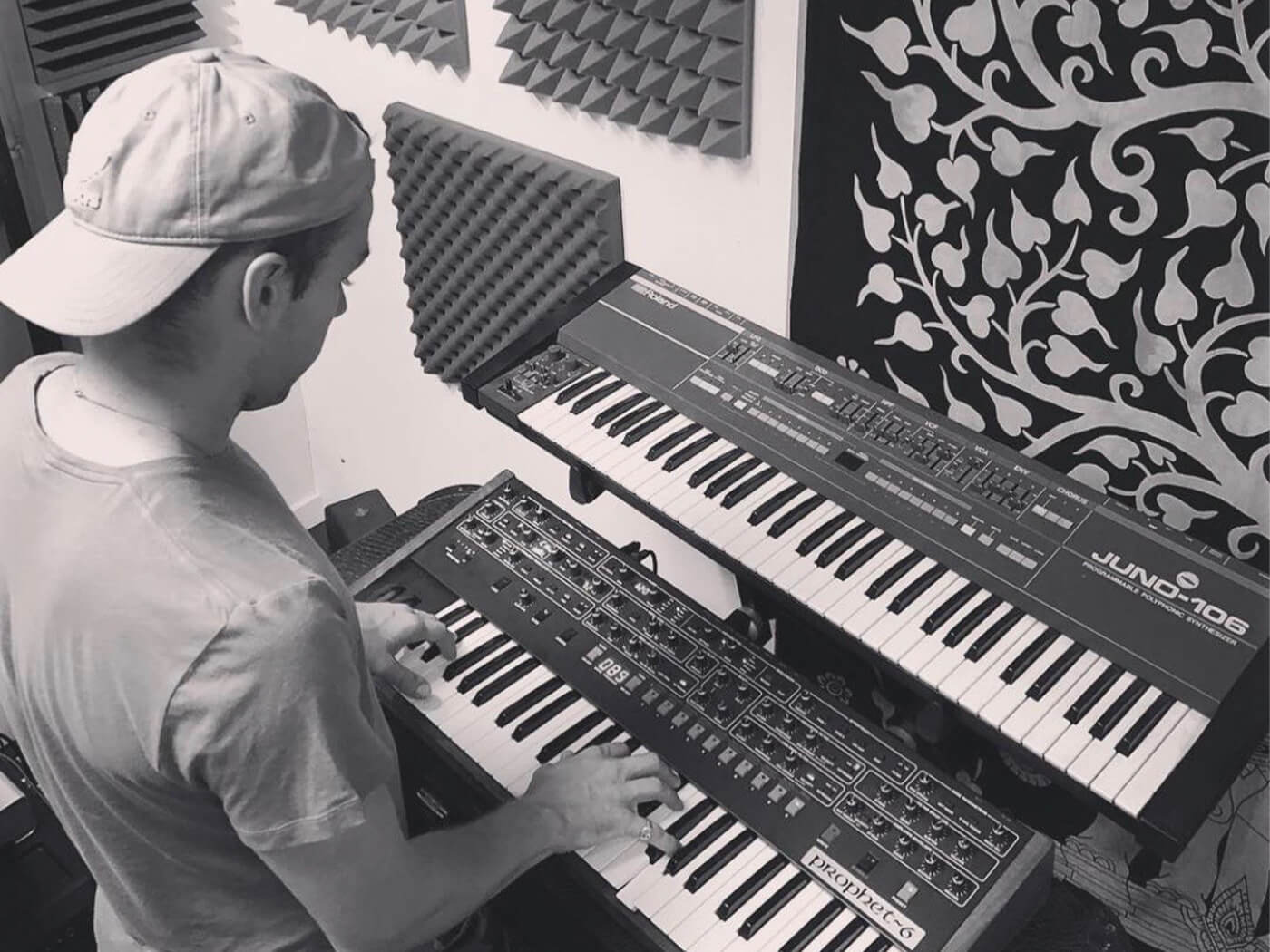 What are some of your best production tips for budding artists and producers?

Keep creating all the time, you’re never making bad music, just flexing your muscles. Stay ready for when that gem shows itself.

Lastly – you’ve been uploading cooking videos to your YouTube channel. What similarities do you find in music and food that keeps you creating?

I guess it comes down to putting my energy into making something I want others to enjoy!