by Will Betts
#Artist/Producer/DJ
Features 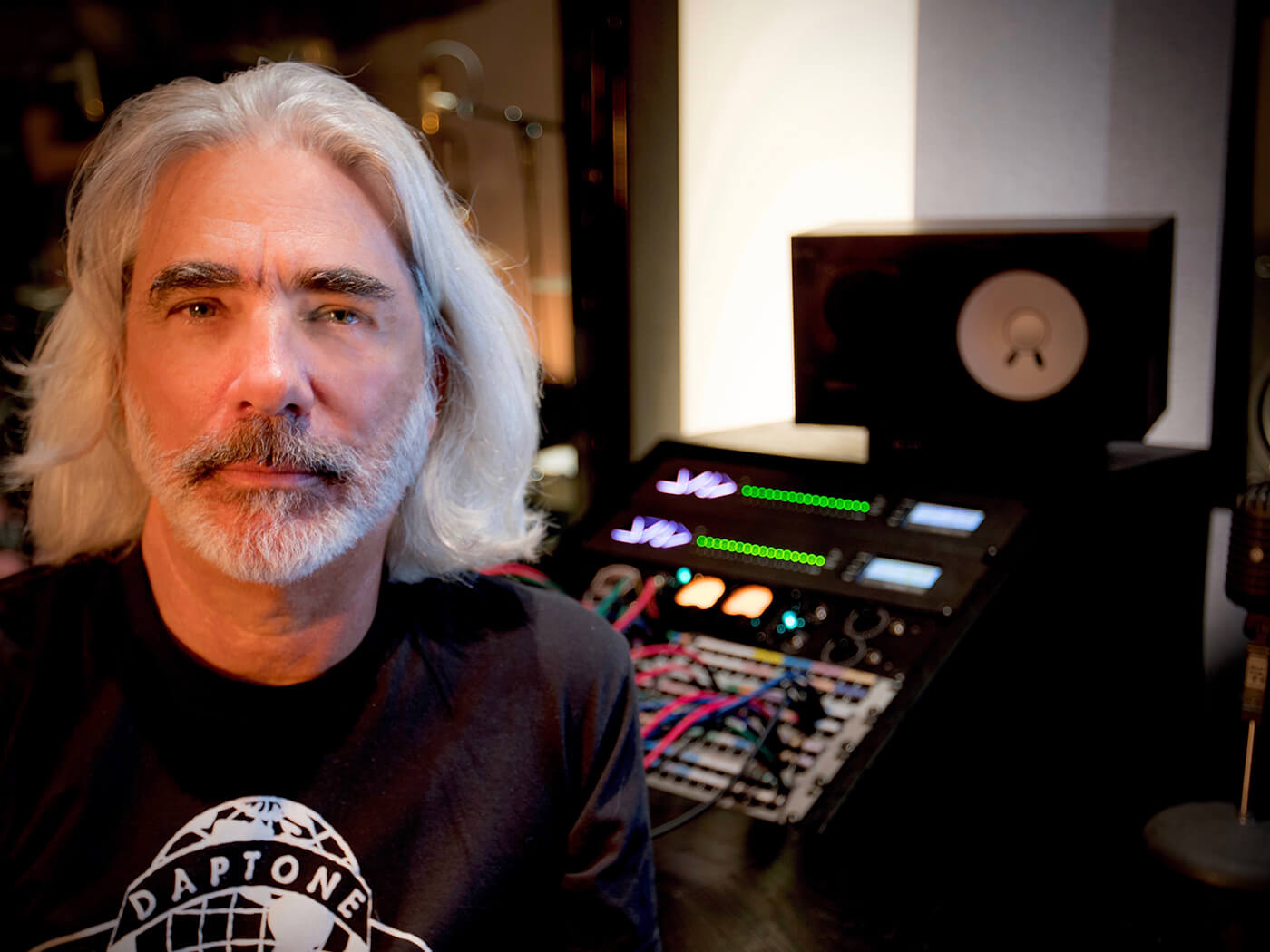 On May 12, 2021, Spotify celebrates a milestone in its music recording history. Spotify Singles, the in-house produced series featuring many of the biggest names in popular music, crosses 5 billion streams.

Since the inaugural recording session in July 2016 with Aoife O’Donovan, veteran producer and recording engineer William Garrett has been at the helm, guiding the sound of Spotify Singles and fostering a relaxed environment that’s conducive to creating world-class recordings. Garrett and his team have produced over 630 recordings with more than 300 artists in under five years. These recordings are all now collated in a Spotify Singles mega-playlist.

Though the roster of artists includes Elton John, Mac Miller, Migos and TLC, the programme has also helped developing and DIY artists spread their reach and expand monthly listener counts.

It’s proven a hotbed for collaboration, too. Celine Dion and Chris Isaak’s duet might be the most iconic of these, while R3HAB & GATTUSO’s Creep cover has proven the most playlisted by Spotify’s editorial team.

Starting in Spotify’s New York City office, Garrett’s operation has now upgraded premises to the iconic Electric Lady Studios – the first session there was Vampire Weekend – and he regularly runs remote recording sessions all over the world.

In our exclusive Q&A with William Garrett, we discuss preparation for successful sessions, breaking records for most people in a session and go-to recording equipment for fast results.

How did you end up producing Spotify Singles?

Since the early 80s, I’ve been a freelance producer, recording & mix engineer. I also owned a recording studio called Electracraft, with branches in New York and Los Angeles. While studying music in Boston, I got a job sweeping the floors at Intermedia Sound and learned engineering, going freelance a few years later. With my musical background, producing was always the goal as it allowed me to be a “member” of each band I worked with.

In early 2016, a long time friend and music business veteran who was working at Spotify said, “wait a minute – you’re the guy!” I had no idea what she was talking about! She then explained the recent completion of a recording studio within Spotify’s NYC offices. They were looking for an experienced producer and recording engineer to run the studio and help with the fledgeling Spotify Singles project. It was my lucky day!

Producing and recording Spotify Singles is at its core “making a record”, and the skills and experience from all my previous roles come into play. The exciting challenge is working with these artists in a compressed time frame. We record two songs in one day, with post-production/mixing happening later. Having usually never met the artists, we need to create an instant rapport and a comfortable atmosphere which takes thoughtful pre-production/planning and the ability to change course in a millisecond. Our team has created a template for these sessions that’s been very successful at capturing great creative moments in the studio.

Where do you do most of your work?

In April 2019 we partnered with New York’s iconic Electric Lady Studios creating a new home for Spotify Singles. With a dedicated mix suite and pre-production suite, we utilise studios A, B and D for Singles recording sessions.

What are some of the most memorable sessions you’ve worked on?

I get asked this question a lot! When I do, sometimes I refer to a week in 2017 when the Monday session was Wynton Marsalis and the Jazz at Lincoln Center Orchestra featuring Jon Batiste. Tuesday was Ed Sheeran, Wednesday electronic music hitmakers Clean Bandit and Friday: Sting. Memorable sessions include our first-ever Singles session with Aoife O’Donovan, our first release with KALEO, an incredible 20-minute session with Wilco, Phoenix recording with toy instruments on a tabletop.

After doing sessions with Alicia Keys, Elton John, Niall Horan, Yo-Yo Ma, TLC, Def Leppard, Mac Miller, Migos, Phoebe Bridgers, Brandi Carlile, Celine Dion and many many more, I think you’ll believe me when I say that every session has been incredible and very memorable. Check out the complete playlist!

Which session was the greatest technical achievement?

With our diminutive 378sf live room in the NYC office (with two mid-sized iso booths), Arcade Fire’s request to record their full nine-piece band, a string quartet and a 14-person youth choir live, using a mixture of headphones and wedges was quite a fun challenge. We used every mic, cable and piece of gear we had, even borrowing wedges from a PA in the cafeteria. We set the (still-standing) record for the most musicians in that room playing live – a total of 27!

How do you tailor the session to an artist’s sound? And how do you make the Spotify Singles sound coherent?

We study the incoming artist’s songs in the pre-production process, listening for signature sounds and production values. We want the artist to be comfortable knowing their usual sounds are available but also encourage them to reach beyond their comfort zone and use our curated instruments, amps and keyboards to create something truly unique. These unique versions of their own material, as well as the covers they choose, are the hallmarks of Spotify Singles.

Regarding recording and mixing, I take an organic approach using proven old-school techniques and microphone/outboard gear choices that have been refined over years of experimentation. With this is a starting point, blending in the latest new technology gives us the best of both worlds. In the mixes, I strive for depth and warmth, and the always elusive perfect balance!

How do you cultivate a creative atmosphere for artists to flourish in, especially during long sessions?

We work hard to make the Spotify Singles session experience not only seamless and fun, but a truly meaningful experience for the artists as well. Many things make this work including in-depth pre-production, the inspiring instruments and recording gear in the studio, the vibey room set up, and consistent technical excellence. Nothing ruins the vibe more than gear failure or inability to make a request happen. Finally, there’s knowing when to speak up and when to stay quiet. My role is that of host, maître d’, vibe wrangler, musical advisor and sonic facilitator. When that atmosphere is successfully implemented, inspiration and creativity can flow, and we just try to stay out of the way!

Are there any techniques or equipment that you use on every single artist, regardless of genre?

In our intensive pre-production, we work with the artist’s teams on any specifics the artists may need and tailor the set up to the music’s genre and style.

As we work quickly and generally can’t audition microphones, we have some standard setups we consistently use for the vocals, drum kit, guitar and bass amps and keyboards. With our recording engineer Jack Mason, we’ve created a template to start from, and we can vary as necessary.

At Electric Lady, the 40-channel Neve 8078 in Studio A plays a major role in the sound of the sessions and the addition of API, Neve, Chandler, and Undertone mic preamps.

While the microphone choices will vary from session to session, here are some of our go-to setups.

Drums: Soyuz 013 FETs for drum overheads, AKG D19E on snare top, Sennheiser MD 421’s on toms and a Shure Beta 91A on the kick (suspended in a Kelly Shu)

Plus, ribbons on horns, Neumann U47 FET on the bass amp, Sony C-37A or AKG C24 on piano. Jack and I are always keen to try something new, so we’re always experimenting.

Your studio is filled with impressive gear, but what’s the balance between outboard and software in your process?

When it comes to post-production, we have set up a system for a relatively quick turnaround that collaborates deeply with the artist. The mixing process is a software/hardware hybrid that I love.

Post recording session, Jack will prep the session for mix using a template we created, cleaning things up and organising the session specifically for the mix, adding groups and aux busses. Using hardware inserts, we can blend plug-ins and outboard gear for the best of all worlds. Some hardware inserts for mixing include LA-3As, 1176, Dept of Commerce compressor, Distressors, a Roland Space Echo RE-150, Premier Reverb Tank and even the vintage mono Ekotape reel-to-reel. The master bus includes a pair of vintage Neve 1081s, the unFairchild 670M II tube compressor, Kush Clariphonic, Neve 33609 and Ozone 9 for all peak limiting and Insight 2 for monitoring LUFS.

We use iZotope RX, Ozone and Neutron EQ, Fabfilter Pro-G and Saturn 2, and Oeksound Soothe 2. We also rely on UAD, Waves, Slate, Soundtoys and Plugin Alliance for analogue-modelled plug-ins, as well as reverbs and delays.

What monitoring system do you lean on most heavily to gauge how the average listener will hear the mix?

For years, I’ve been relying on NS-10Ms as my main mixing monitor (the pair I use every day I’ve had for 20 years). I recently added ATC SCM25s, Auratones and Focal Clear headphones to the array that help expose some of the NS-10’s blind spots, but the NS-10Ms are my first and last listen. I run an Adam sub with all the speakers.

During the pandemic, we partnered with artists to help them make the best recordings possible under the circumstances. Most artists were able to work at home or nearby with great gear and a high level of technical expertise. In most cases, I mixed the remotely recorded sessions at Electric Lady and could address any remote recording issues.

While at-home recording has improved drastically, tried-and-true recording techniques still make a big difference. A good room, good instrument, good player, good mic and good signal path still create the best recording. When some of those elements are not available, improvising to create quality and unique sounds is the exciting part of making a great recording. Trust your ears, and don’t overuse all the crazy plug-ins that attempt to simulate the sounds you’re searching for or emulate another engineer. Put that guitar amp in the bathtub!

What advice do you have for producers and engineers on a budget?

I think a great, versatile mic and an excellent mic pre are certainly worth the investment. The signal path to your DAW is most important.