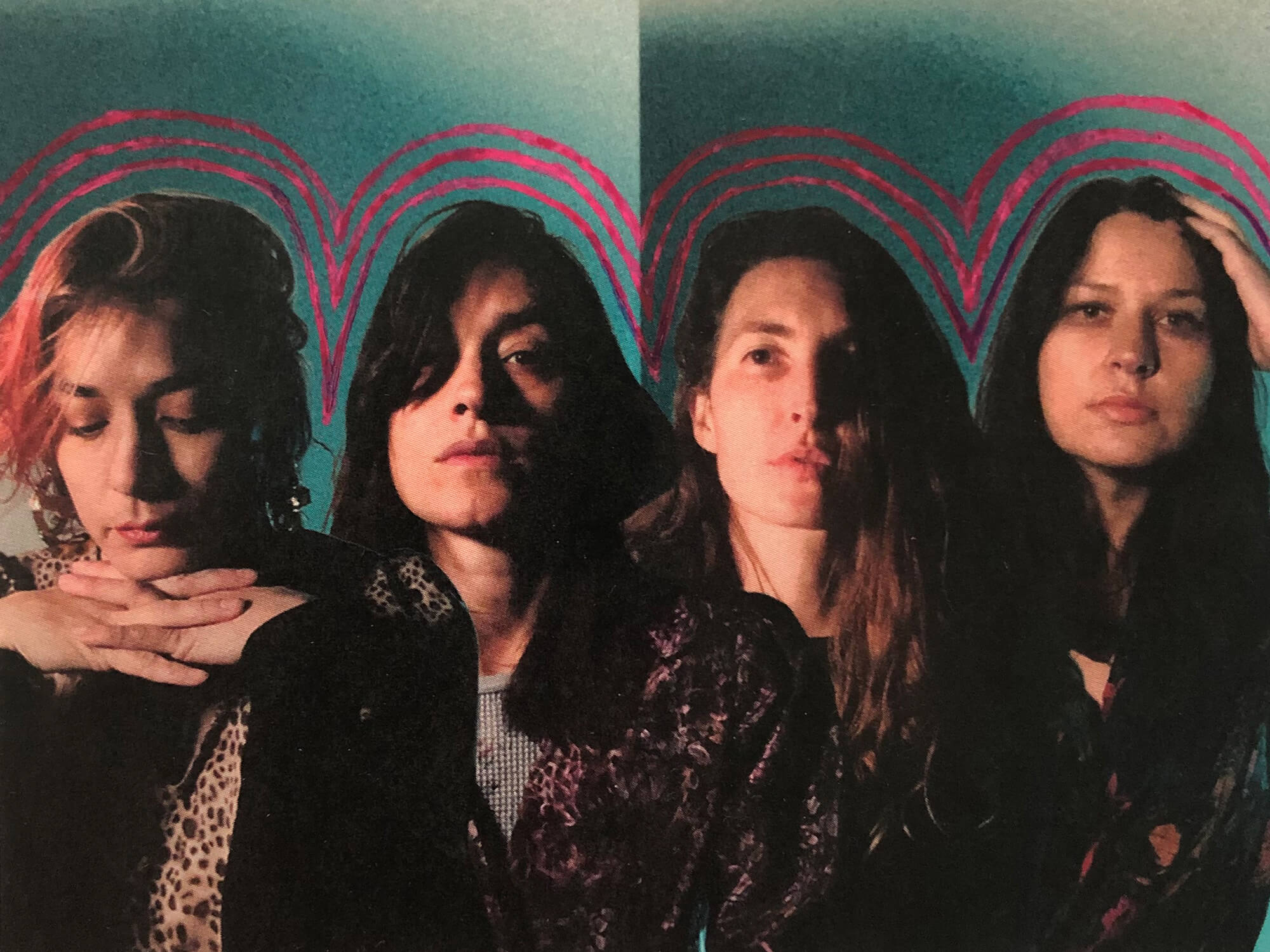 Warpaint on their woozy new album, Radiate Like This: “There is a reason people go to Joshua Tree to make music and feel free to express themselves.”

The sun-kissed Californian psychedelia of Warpaint is back and sounds beautiful. We hear how recording sessions in the desert of Joshua Tree brought the band closer together than ever.

“I found the separation forced on us meant we were so trusting when we worked together”, says Warpaint’s guitarist and vocalist Emily Kokal. “And trust like this is so liberating, it’s one of the greatest gifts in a musical collaboration.”

The Los Angeles indie outfit, made up of Kokal, Jenny Lee Lindberg (bass, vocals), Stella Mozgawa (drums, vocals) and Theresa Wayman (guitar, vocals), have been tight for almost 20 years. And despite the length of their friendship, the strength of their bond persists. It’s obvious even from our Zoom call, where the group spend most of their time finishing each other’s sentences.

It’s been six years since the release of Warpaint’s last album, 2016’s Heads Up. As with so many creative projects of late, follow-up Radiate Like This was knocked off course by covid-19. Although some sessions took place in person, much of the album’s writing and recording was crafted via video calls and file-sharing platform Audiomovers, which has given the record a distinct flavour.

“There’s a beauty to this album because of its circumstances made between two worlds,” says Kokal. “Some of the songs might never have happened or turned out like they did if it hadn’t been for us all being kept apart by the pandemic.”

After they returned from touring the Heads Up record, the diaries of all four Warpaint members became increasingly packed with projects outside the band.

Lindberg worked with modern rock icon Phoebe Bridgers and made a second solo record, Heart Tax, while Wayman also released her own LP, LoveLaws. Kokal has had a child and Mozgawa returned to Australia where she worked with artists including Sharon Van Etten and Cate Le Bon. Despite all this extracurricular activity, the group always intended to reunite and make music again.

“You just need a little bit of time to decompress and figure out who you are as an individual person after a long stint of touring,” says Lindberg. “We usually go on tour for a few years around each record and it felt good to give ourselves some space before we started writing this next collection of songs.”

Warpaint formed back in 2004, initially with drummer Shannyn Sossamon, and have since released four albums, which include 2009’s The Fool and 2014’s self-titled Warpaint. Each LP has seen the band hit the road and play venues and festivals as part of a relentless live schedule.

“It can be like a conveyor belt,” says Kokal. “The touring of one album starts to slow down and it’s hard to re-adjust to writing. But it would be different if we could do multiple things at once. We’ve always dreamed of having a bus studio where we could go after our shows to make music. We haven’t made it happen just yet.”

Warpaint’s creative process – much like their sound – has evolved through each of their records. All of the group’s individual members have grown in confidence in terms of what they can create on their own using software and home set-ups. It’s almost as if the years preceding the pandemic helped prepare them to record in isolation.

“It’s always changing between records,” says Stella of how they write. “When I joined, we’d get in the room and someone would have a riff or an idea. For records like The Fool and Warpaint, there would be some point to jump off together. And we’d usually be in the same room to flesh things out.”

As the band’s scope has widened, each member has become more computer-literate, and able to put more weight into the ideas before sharing with the others.

“There’s no rigid way of doing this,” says Mozgawa. “We’ve just developed the skills to record and demo ourselves better, which has led to more solo time.”

“It’s very song-specific for me,” adds Wayman. “Some things come together and finish themselves really quickly, others linger on and become more cerebral.”

Despite working alone, the group dynamics are an important glue in binding the band’s ideas together. Without this input, Wayman feels their tracks would be more challenging to complete.

“For every record we’ve done, we’ve continued to be more intentional,” she says. “Our aim has been to be more vivid in what we’re putting down, how we interweave our parts, find clarity and something more succinct in our songwriting. But I need the others to get me there.”

Some of the foundations for tracks on Radiate Like Me were created before covid-19 hit. Warpaint then retreated into their home studios where they could work on their parts individually and create tracks layer by layer.

Hips is an album highlight for Lindberg and initially came from playing in the studio together. Kokal then added her vocals towards the end of the album sessions.

“I love where we took it after we just jammed out the song,” says Lindberg. “We weren’t sure where we were going but the song just showed itself so easily. It has a real vibe and was one of the first songs we worked on during the writing and pre-production.”

The finished version came from heading to the studio with mixing engineer Tucker Martine. Kokal remembers how his immediate, in-person connection with the track came as a welcome relief after months of video calls.

“I’d told him the story of how I’d gone to Egypt and he just got it straight away,” she says. “We realised it had this snake-charmer vibe and he channelled this story I’d told him into the mix. It was just so fun after so many remote sessions to be in this room, panning Hips to the left, then to the right, and making this song come to life.”

Out in the desert

A recording session at Mozgawa’s studio in Joshua Tree was a pivotal moment for the album too. This is where ideas for other album tracks such as Champion and Altar first came into view.

“Every time I listen to those songs, I’m transported back to those incredible couple of days that we had in the desert,” says Lindberg. “That session was the highlight of the album-making process in my humble opinion. It was really fun, we let loose, and had a great time – it was like being best friends at primary school and having a slumber party.”

“It feels so clichéd and overcooked as a destination but there is a reason people go to Joshua Tree to make music and feel free to express themselves,” agrees Mozgawa. “The physical space just offers this special environment. I had a very meaningful experience when we were there and writing our second record. It feels like we can isolate there together.”

While some tracks were recorded at Stella’s home studio, other parts of the album were captured at Rancho De La Luna in Joshua Tree. Kokal also has a home out there with a domestic recording set-up.

“I had a new baby and we moved out there so it’s where I recorded a lot of my parts,” Kokal says. “There are a lot of pieces of the desert in different moments of the record and the last couple of years.”

The new family addition alongside the pandemic put unfamiliar pressures on Kokal and her music making. Her approach was to take the chance to lay down her parts whenever she could steal away.

“In some moments, it was really liberating as I could go down a musical wormhole and not be self-conscious,” she says. “Then sometimes I’d feel a pressure and want to move quicker than I could. I’ve never had more desire to work and less time to do it.”

Back to life on the road

After so much time apart, Warpaint are now gearing up to reunite in person and get back out on the road, a part of their band life that seems so familiar yet has a new halo of excitement around it. Throughout our conversation, the sense of friendship that holds their group together and defines their musical chemistry, is evident.

“We’ve been great friends for a really long time and that helps propel this project,” says Lindberg. “As with any friendship or relationship, you need to take care of it and communication is key.

“This is the most important thing ever in the world with any relationship you have,” she continues. “When we’re all communicating with each other in an honest and open way, it helps us feel closer and there’s more trust, more vulnerability so we’re able to be more authentic with ourselves.”

Warpaint are on tour throughout 2022, visit warpaintwarpaint.com for more information.