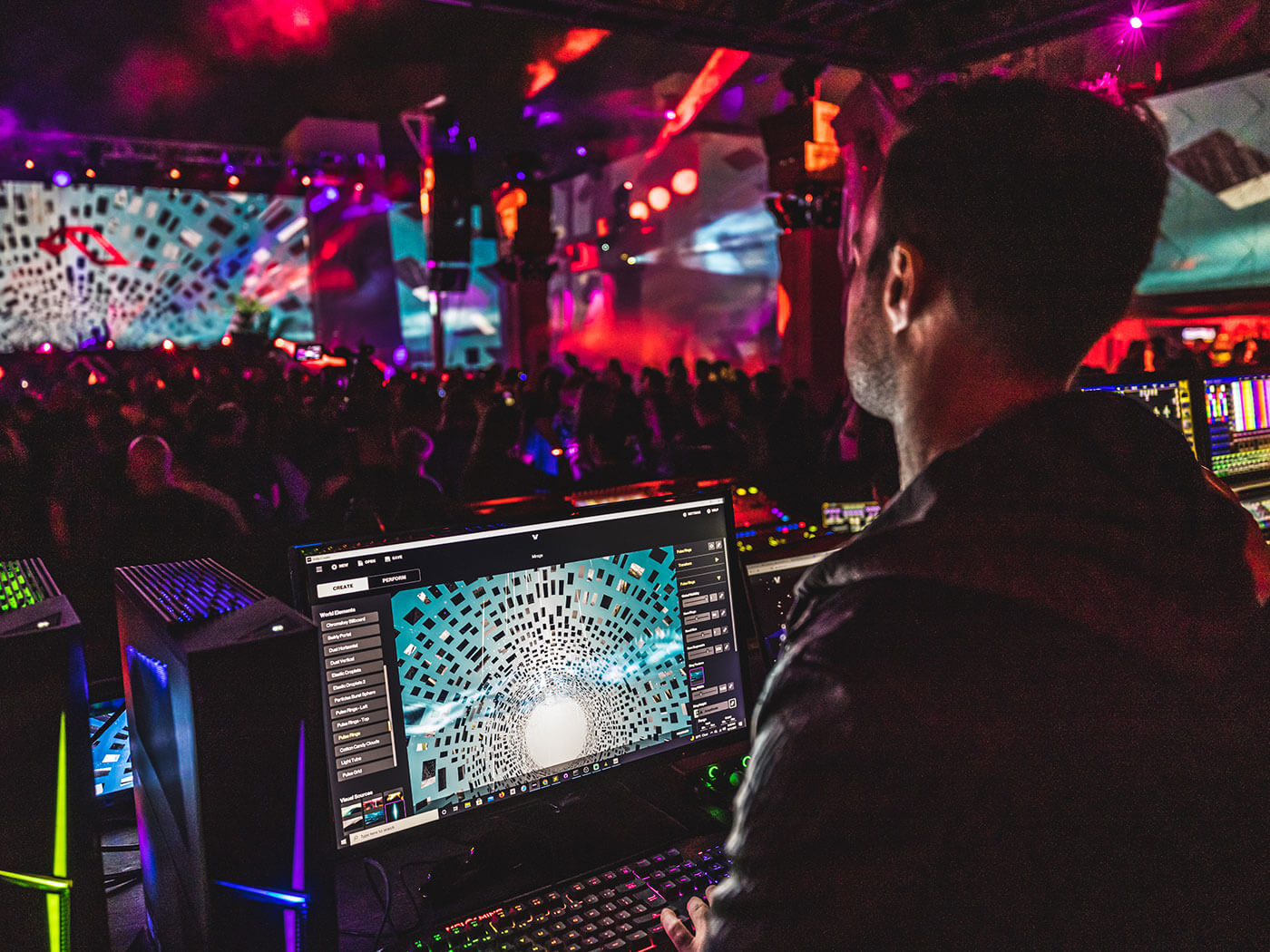 Volta XR’s Alex Kane: “Mixed reality will become a respected art form, and the path to that is through music.”

The modern concert experience is built on spectacle. From the elaborate theatre production of a Lady Gaga show to the multimedia extravaganza of Coldplay’s recent Music Of The Spheres tour, the live music industry is locked in an audio-visual arms race to see who can dazzle their fans the most. Despite those heightened expectations, the software required to create mind-blowing concert experiences has been generally out of reach for most small or independent artists, carrying either a high price tag or a steep learning curve.

Enter Volta XR, the UK-based startup aiming to make immersive concerts achievable, whether you’re playing small club gigs or filling a stadium. With real-time 3D rendering, native integration with DAWs like Ableton Live and Serato Studio, and ‘audio reactive’ visuals that sync perfectly to the beat, the company’s Volta Create platform is fully featured and easy to use. Oh – and it’s free.

“We’re trying to democratise the tools,” says Alex Kane, Volta XR’s co-founder and CEO. “To help artists and to normalise the idea that everyone can do this if they want to.”

Officially founded in 2019, Volta XR began its life during Kane’s master’s degree in Innovation Design at the Royal College of Art and Imperial College London. Originally conceived as a user-interface for mixing spatial audio in VR, Kane says the project rapidly grew after completing his studies from something “held together with duct tape and super glue” into a high-powered media creation tool aimed squarely at musicians. 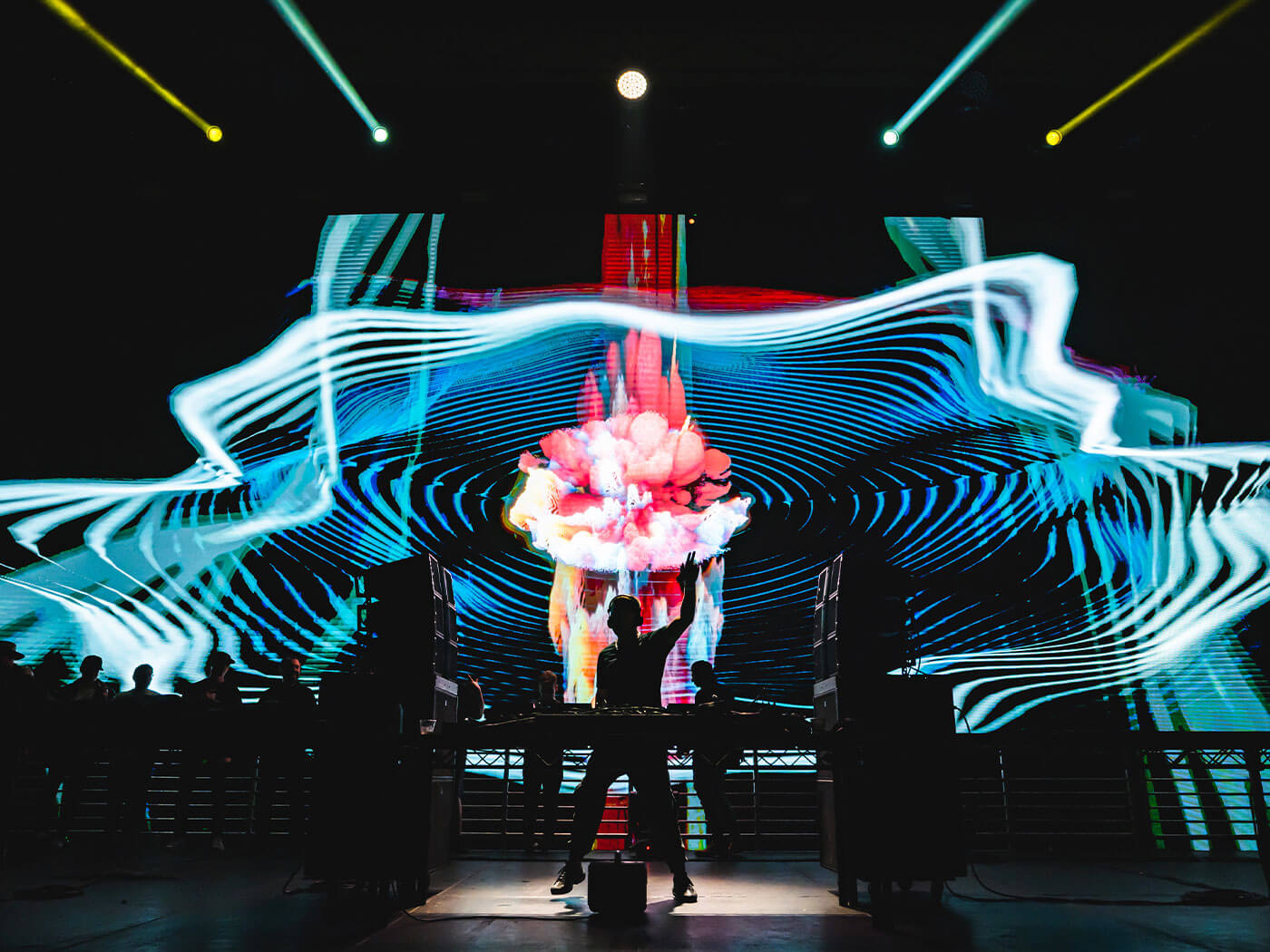 Though Kane describes a rocky start for the company, with much trial and error, Volta XR now counts electronic music heavyweights Richie Hawtin and deadmau5 as its investors, and a number of big-name artists among its user base. Imogen Heap used the software to create a music video in real-time, DJ Yoda has used it to create immersive livestreams on Twitch, and Bonobo fans got a taste of what the software can do during the musician’s recent Glastonbury set.

“All of this has happened very quickly,” says Kane. “I’m a huge Bonobo fan, and the fact that we got to do his Glastonbury set is really incredible”

Volta’s rise has been rapid, but Kane says these tools address a need that’s been within the industry for some time. “If you look at cultural expectations around live music, from the harpsichord all the way up to thirty or so years ago, the main focus was musical virtuosity; you went to a show to see musicians who were either extremely skilled at playing or were able to communicate a certain amount of emotion through their instrument or voice. Then you started to see this shift towards spectacle as the focus. Personally, I think the Daft Punk Coachella pyramid show was a defining moment where everyone realised ‘oh shit, we have to step our game up.’”

To help artists do just that, Volta Create abstracts away much of the complexity and instead offers a limited but powerful palette of creation tools which, the company maintains, empower artists to create performance-ready mixed reality visuals in “minutes.”

Immersive visuals aren’t only integral to in-person events. In a trend accelerated by the COVID-19 pandemic, livestreaming performances have become an essential practice for musicians trying to build, or maintain, an online fanbase. From within Volta Create, artists can stream directly to Twitch, YouTube, and other platforms, using real-time effects to transform the four walls of their bedroom studio into just about anything they can imagine. 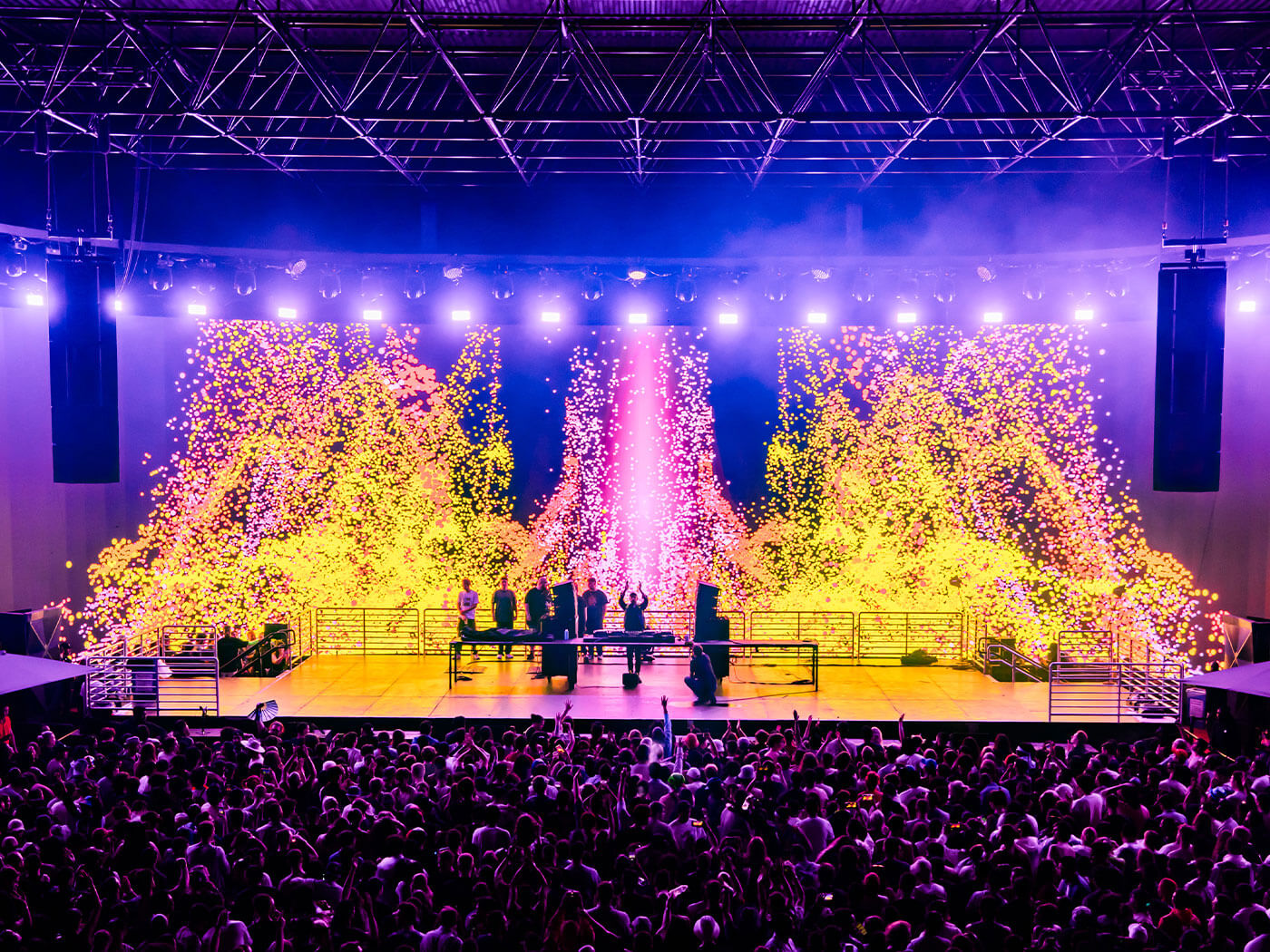 At the same time, the company is busy working on a set of new fan interaction features that could potentially offer artists new revenue sources. In the pipeline is a text-based form of interaction that takes a concept similar to Twitch’s shoutouts and emote overlays and supercharges them. Here, fans use keywords to trigger visual effects during an artist’s performance; accompanying this feature will be a micro-transaction system, letting artists monetise these interactions if they so choose. There’s also a planned marketplace for the Volta community, where user-created visuals and environments can be bought and sold.

As a long-time musician and instrument builder in his own right, Kane knows the economic challenges that artists currently face in a music industry dominated by streaming. “Music’s always been core to my life, creatively and professionally,” he says. “At one point, I tried to give it a real go but it’s so very difficult to make a living – you’re either Kanye or you’re not.”

Kane believes that Volta XR can help abolish the imbalance between the music industry’s superstars and its grassroots. Riding on a wave of new monetization and fan engagement models, exemplified by the growing Web3 music community, Kane believes a new career model for artists is possible. “You really don’t need a massive fan base to make a meaningful income anymore,” says Kane. “You just need a passionate one – and if you want to incentivise people to contribute or donate to you, that should be within your capacity.”

Speaking with Kane, what comes up again and again is his desire to break down barriers of entry, to democratise tools, and to give artists inroads into areas of the music industry that have historically been reserved for label backed artists with money to spend. That ethos plays a large part in why his company has opted to make its tools free to use – but of course, that doesn’t mean they aren’t interested in making money at all.

Over the longer term, there are plans for Volta to watermark streams and recordings, which users can pay to remove, and to take a small percentage of sales on their planned marketplace and microtransaction system. Kane emphasises that the goal is to get people creating first and foremost and that the company “only makes money when artists do.”

As the company plans to roll out these innovative new interaction features, Kane says he and the Volta XR team are keenly aware that, if not handled correctly, all of this could distract from the music rather than enhance it.

“Whenever you try to introduce anything new like this,” he says, “more often than not, the technology gets in the way. The easiest thing for us to do would be to give audiences some sort of app that acts as a remote control for the show – but doing that means putting something between the audience and the real core of the experience. So, we’re trying to do things in a more thoughtful way.”

Thanks to a hefty £400,000 grant from government-sponsored Innovate UK, the company is currently researching the history and psychology of live music performance to better understand how its new tools and features will shape the audience experience.

“We’re trying to do a deep dive into the behaviours and rituals around shared musical experiences,” Kane says. “Why do we clap for applause? Why do we like to sing together? What is it about all these things that brings people so much joy and feelings of unity?” 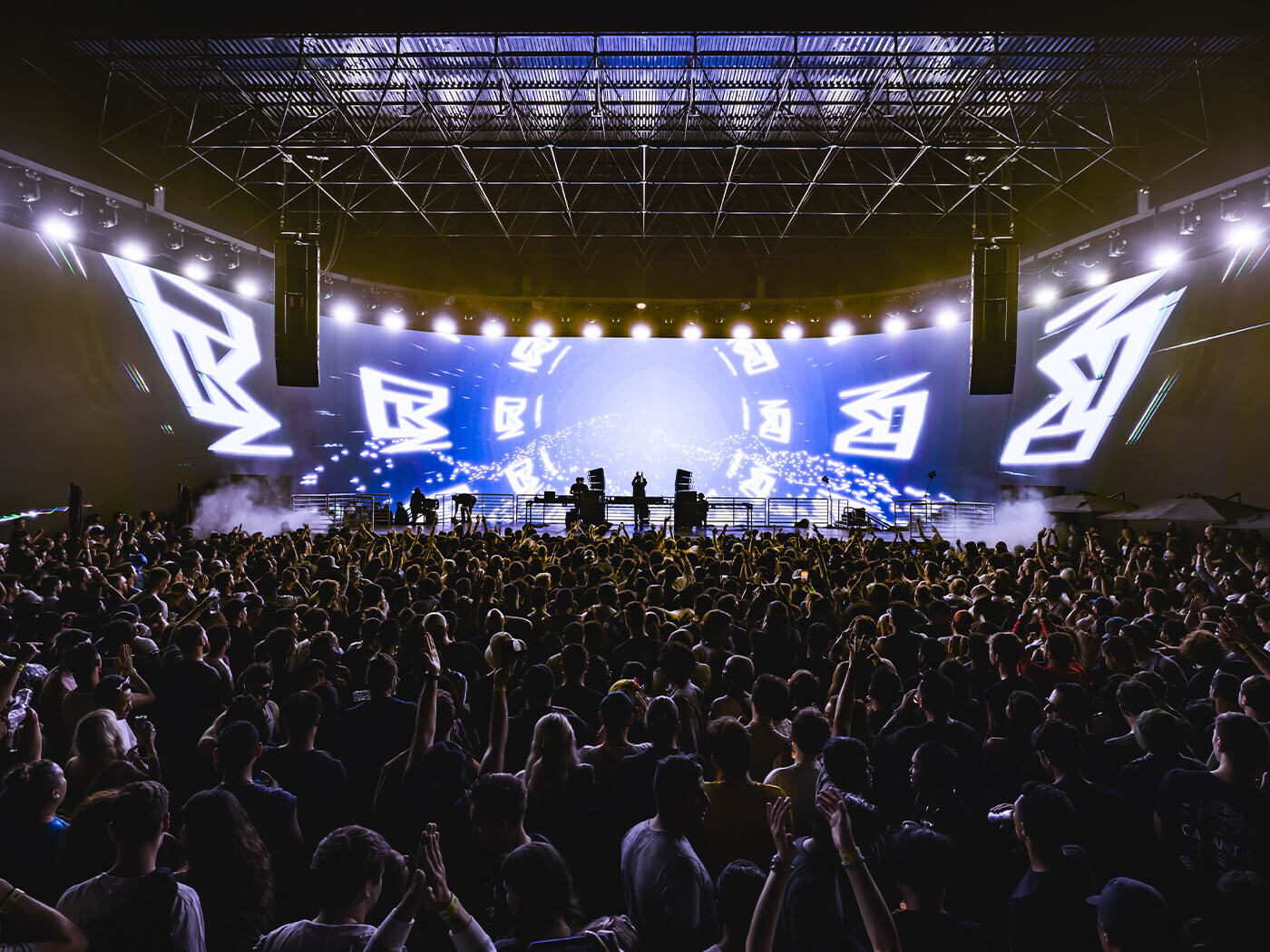 Kane says the company’s current focus is on physical concerts and livestreams but, in the long-term, Volta XR has its sights set on mixed reality technology and the looming spectre of the metaverse. “We believe that mixed reality is going to become its own respected art form,” says Kane. “And the path to that is through music.”

Kane feels so sure about this new experiential artform, that Volta XR has gone out of its way to “future-proof” their software: Volta Create already generates all the 3D and interaction metadata needed for VR or AR experiences and, starting next year, the company plans to let users access and save that data. “The content that you make now will not only be useful for your current performances,” says Kane. “It will be ‘evergreen’ for when Apple, or Meta, or whoever eventually comes out with a consumer level AR headset – all of the content people will have previously built will be applicable for whatever 3D hardware comes in the future.” 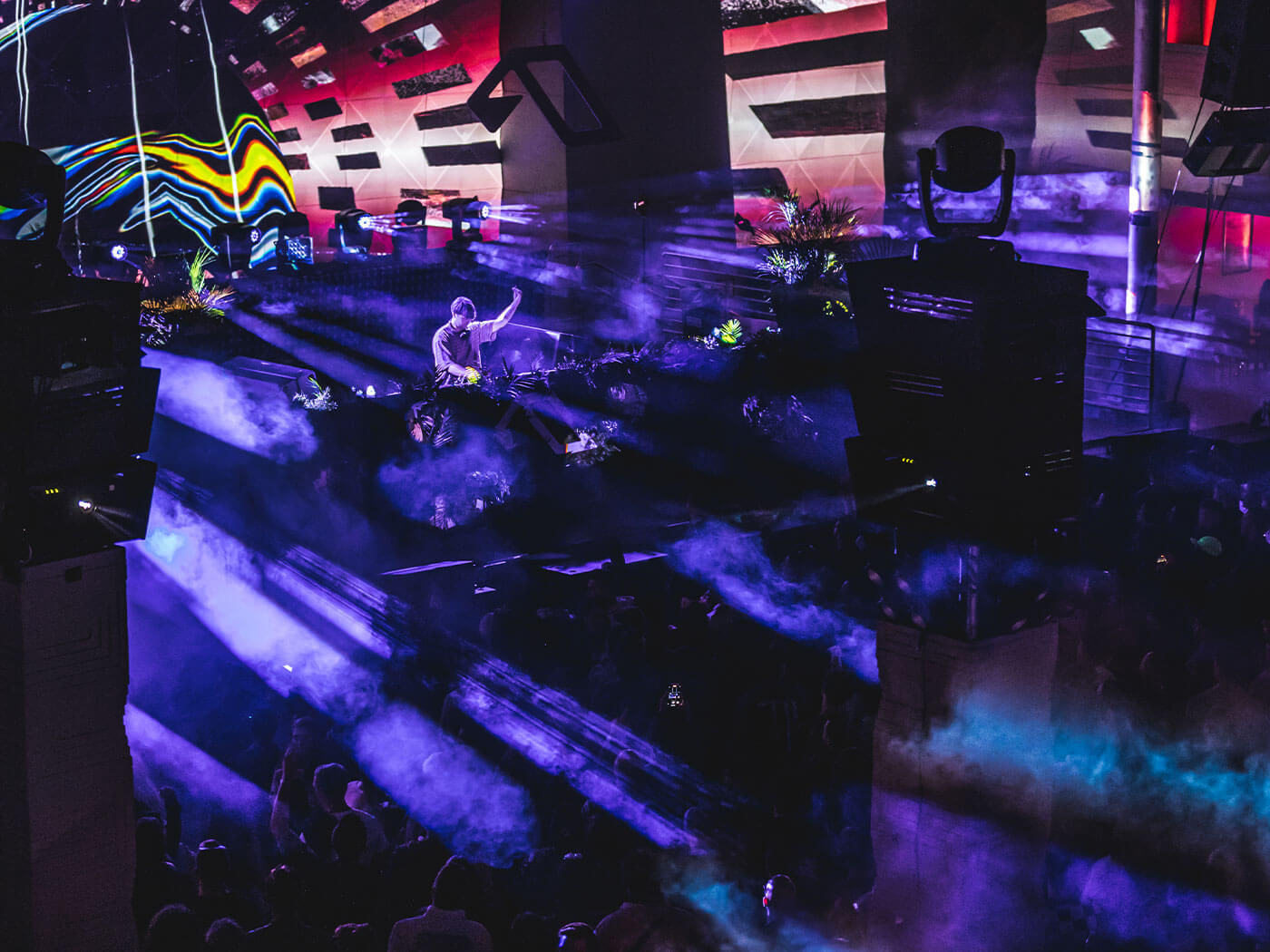 Of course, mixed reality and the metaverse has passed through various rounds of hype over the years and, so far, we have yet to see the concepts truly deliver to the mainstream. To their credit, Volta XR isn’t sitting around waiting for that imagined future to magically appear – it’s actively breaking down the barriers that are holding it back.

“We believe experience itself will eventually be viewed as a canvas and it’s our goal to become the de facto paintbrush. So, we’re trying to democratise these tools because this can’t become a respected art form if people don’t have the opportunity to dig in and experiment – that’s why Volta is free and is going to stay free as a creative tool.”