by Will Betts
#Artist/Producer/DJ#Monitors#Studios
Features

On music-making: “It’s more fun to learn and explore than to be efficient.” 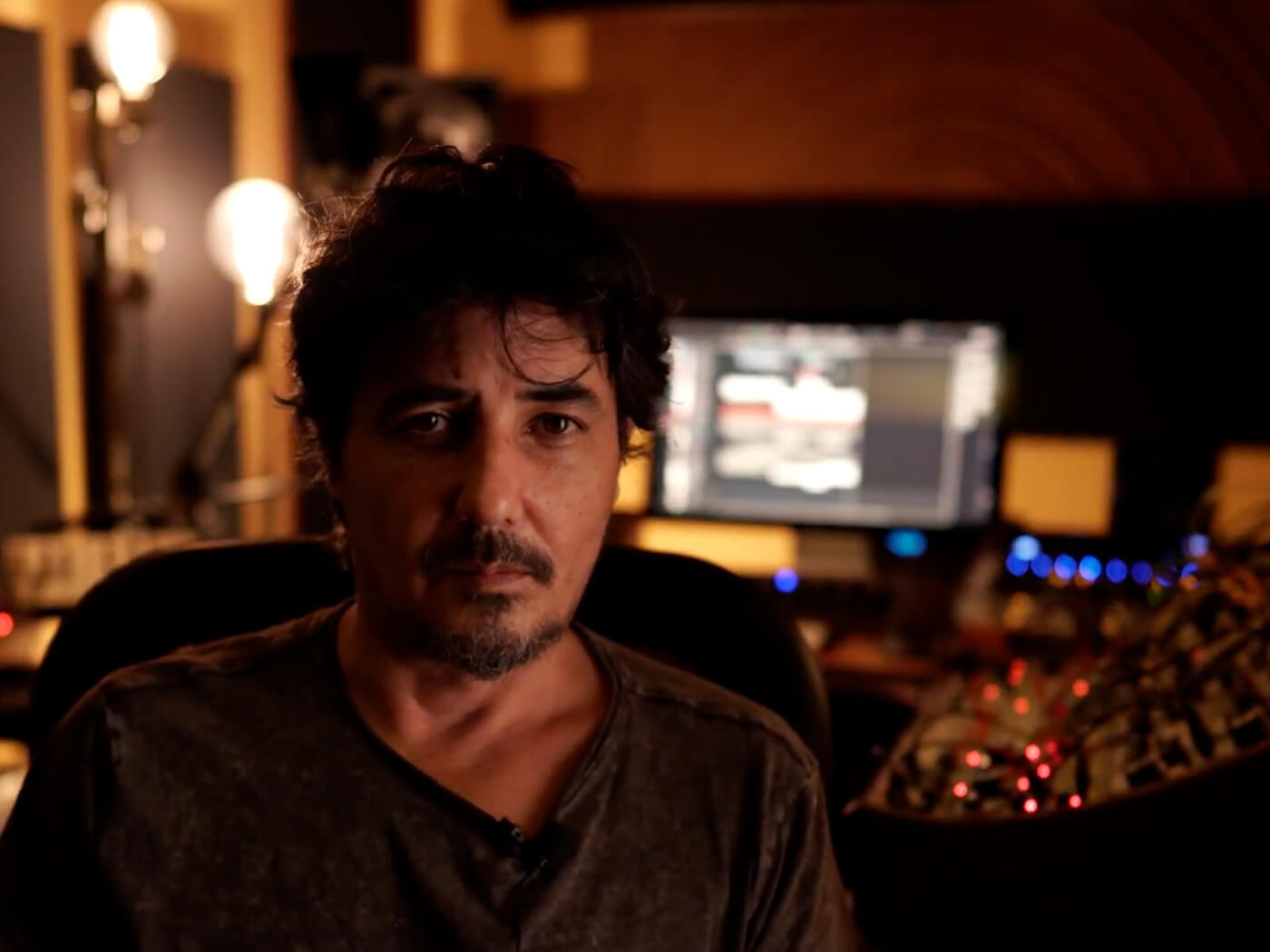 Amon Tobin has been making futuristic-sounding music for over two decades. And his output has been prolific. Perhaps more amazing is that he’s excelled in every genre he’s turned his hand to – from IDM/glitch to psychedelic synth-rock, vocal-centric folk, or leftfield acoustic music.

For each of these genres, he has a different alias – five currently active. In our video exclusive, learn about the monitoring he uses to produce for all of them.

This year we have records to look forward to from two of those aliases: Amon Tobin and Stone Giants. However, if it were just up to him, Tobin would name his records more simply.

“I’d release everything under one name with numeric titles if I could, but out of consideration to listeners, I try and group things into categories,” he says.

“I think about music as lovely puzzles of tone, rhythm and melody – the different aliases develop alongside each other, occupying their own musical territories. So How Do You Live [the upcoming record] pushes ahead with quite elaborate instrumental music under my own name. Stone Giants, on the other hand, looks at how voice can sit with electronics in song structures that have quite romantic themes.”

Although Tobin’s music is packed with intricate edits, glitches, transitions and inventive sounds, he doesn’t see anything out of the ordinary about how he makes sounds.

“I suppose I make things that are specific to what I need so in that way they might be thought of as unusual when really they are just personal. It’s more fun to learn and explore than to be efficient,” he says.

You might think he has a specific technique or toolkit for making his archetypal sounds, but he claims otherwise.

“I don’t have anything magic in my studio. It’s not even about the gear, really. As much as it’s seductive to imagine particular gear or effects chains behind a sound, it mostly comes down to decisions about how to use things. So, in spite of what hardware and software manufacturers might charm us with, the onus remains on us to make things good.”

However, he does reveal one technique he’s been exploring for his sound design, which you can hear in his recent single Rise To Ashes from the upcoming record How Do You Live.

“I’m not always sure what people mean by sound design, honestly. But there’s a curious morph between strings and voice in the vocal layers on Rise To Ashes [1:06]. I’ve used spectral morphing a fair bit over the years to find interesting spots between different instruments and sounds.”

As far as tools go, he turns to a particular processor for distortion, which features heavily on his output: “I like Metasonix quite a lot. I have some in Eurorack format, and they got used throughout the Only Child Tyrant record,” he explains. The module he’s referring to is part of his enormous Eurorack system, and the Metasonix has tubes built into it for a specific texture of distortion.

It’s perhaps no surprise listening to the intricacies of his music that Tobin rarely relies on the random.

“I’m not drawn to randomisation, in general. It can sometimes play a useful role at the very beginning of a process when I’m still collaborating with instruments. But at the point of writing something with any level of interplay between sounds, then no. Each phrase, whether it’s melodic or percussive, needs to be sympathetic to another in a composition, and that’s not something I’d want to leave to chance.”

For his arrangements, which can often involve dramatically contrasting textural shifts, it’s less about rigid structures and more about intuition.

He explains: “Contrast is another word for dynamics, so those are useful across the board whether you’re talking about texture, arranging or mixing. I don’t have rules particularly outside of those determined by physics, but you can intuit a fair amount from your own emotional response and how that might translate to others.”

Tobin’s sound has evolved dramatically over his career. His early records had sampling at their heart, but now he’s virtually abandoned the practice.

“Sampling was fascinating to me in the early 90s,” he says. “I was trying to understand how sounds that had established contexts would behave when removed and put into new contexts. But that process mutated into smaller and smaller fragments being reordered, chained together and processed to a point where the source was irrelevant. It became a form of granular synthesis almost. So, by the late 90s, my interests shifted away from sampling altogether. Even though there haven’t been samples in my music for many years, the things I learned about editing and how disparate sources can find common ground still inform how I make music today.”

One of Tobin’s most successful records, 2011’s ISAM, spawned a spectacular live show which helped redefine the live electronic music show format. Blending mind-melting projection mapping with tightly correlated futuristic sound design, it pushed open the door for a new way of thinking about live electronic shows. Yet, even with the enormous impact of the ISAM Live tour, the producer is keen to distance himself from some of the shows that it inspired.

“In spite of what hardware and software manufacturers might charm us with, the onus remains on us to make things good”

“At its core, ISAM was about becoming part of an animated story on stage to spare people the chore of watching an electronic musician perform. It was interesting because, at the time, we were all wrestling with a new demand for a genre of music that didn’t lend itself to live performance. ISAM was the best solution I could come up with, and it became this huge success all over the world, but there was a cost.”

“The seismic effect was that the expectation for large-scale productions in the industry often eclipsed substance, and there’s also something alienating and impersonal about the giant multimedia spectacle. So, like sampling, it had its time at the edge of new things, but I suspect after a decade of bigger and bigger stage extravaganzas, people might be craving smaller, more intimate experiences.”

For Tobin’s Stone Giants project, more intimate gigs may be the way forward, but he’s also keen to get out and play as Two Fingers – a project that was not made for armchair listening. Specifically, one song, Fight! Fight! Fight! struggles to be constrained by lockdowns.

“It was very much made for the club and came out right as the world was shutting down. Fortunately, it’s such an insane record it’s weathering the storm well, and I know I’ll be playing it when the doors open back up.”

West Coast Love Stories by Stone Giants is out now, along with Rise To Ashes by Amon Tobin. The record from which the latter is taken, will be out on July 2, 2021 on Nomark Records.