“The dialogue, to me, is the singer”: Tyler Bates on composing for film and TV

We sit down with in-demand film composer Tyler Bates to discuss punishing deadlines, his love of orchestral arrangement, and collaborating with non-musicians. 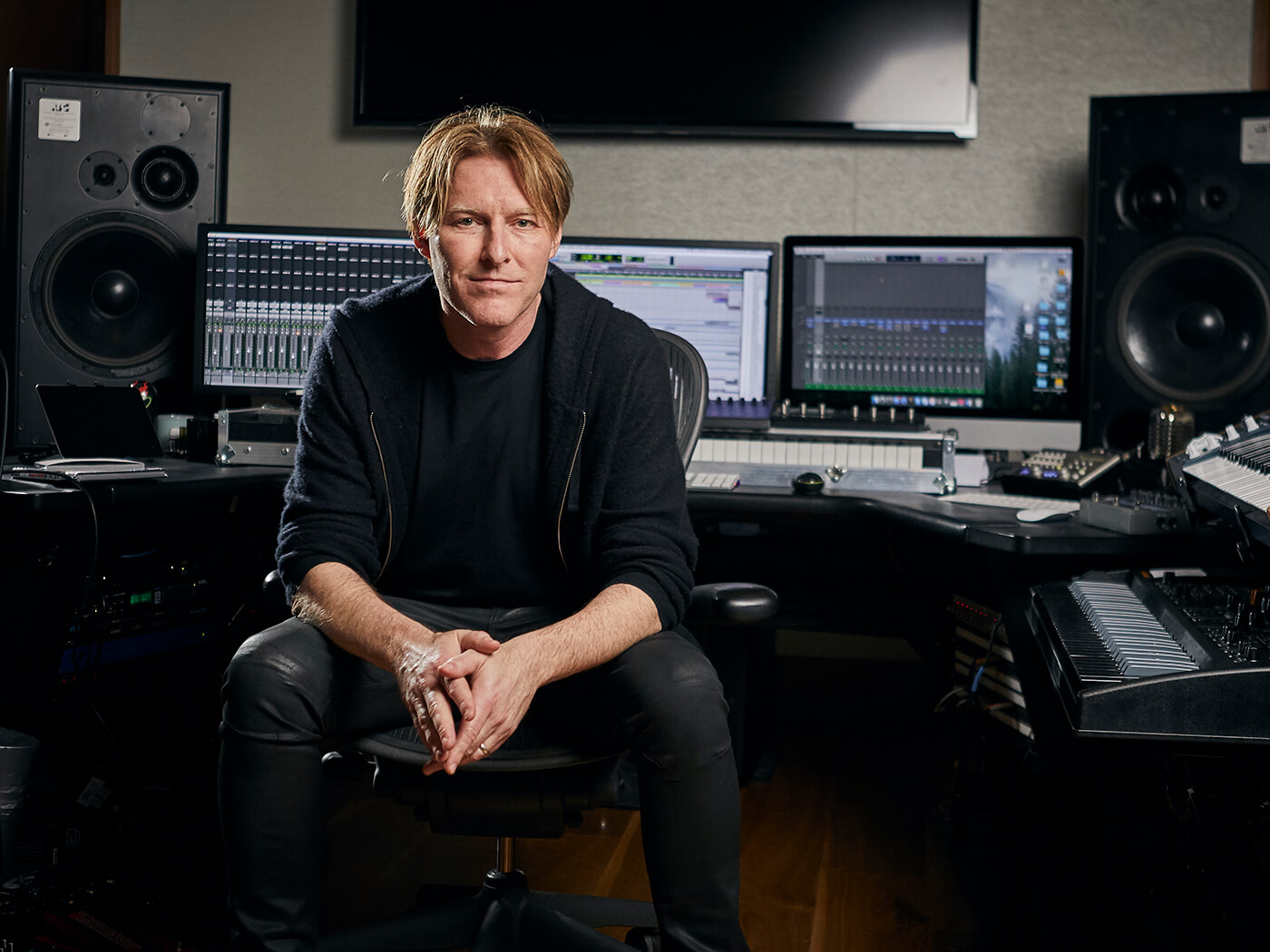 Tyler Bates is quickly becoming one of the most sought-after names in Hollywood film scoring. His credits include 2019’s Hobbs And Shaw (the latest in The Fast Saga), Guardians Of The Galaxy Vol 2 and John Wick. Alongside film work, he has overseen TV and video game projects, produced records and even composed for live musical attractions that include Cirque du Soleil’s current Las Vegas residency. Clearly, his output is as prolific as it is diverse.

You’re often forced to work at tremendous speed, is that right?

Given the truncated post-production schedule on Hobbs and Shaw, that was maybe the wildest project I’ve worked on. I had a short amount of time to record the guitars and basses for that score. There were 100 cues with hundreds of tracks in them, to be created in a matter of two weeks, besides writing. You just can’t think too far down the line. When I got into those cues, some of them were pretty tricky. The movie changed after we recorded the first major orchestral session so, even though I had a score to work from when I was matching the guitar to the violin and cello parts, that was a challenge.

I recorded nearly everything in quadruplicate for the music to be thick enough to withstand the gunfire, explosions and breaking-glass sounds [at the dubbing stage]. There were significant changes to the picture happening as I was getting on the plane to London to record – and we were going to record 70 minutes of music in two or three days, which is a lot.

Once I got back, the music editors would often cut those cues to the newer picture. Some things could still be salvaged but some could not. Sometimes they’d send me a mixed/edited piece of music that had 15 7.1 surround stems, so I’d go back in and clean it up so that it still felt musical. That would allow me to determine whether a given section of that music needed to be re-recorded in a pick-up session. It’s not ideal and it’s not relaxed but it’s a challenge and there’s overwhelming relief at the end.

How do you manage your enormous workflow and productivity?

I have four studios in my house, where associates of mine work in various capacities. One primarily handles incoming data, materials, software, printing and delivering stems, scores for television shows, games, things like that. In the case of Hobbs And Shaw, I worked with Igloo Studios, which is owned by a friend of mine. So [Grammy-winning] Gustavo Borner or one of his team performed the role of engineer and mix engineer on the score. But, at one point, we had three studios mixing because there was so much material. In my own studios, Welsh composer Joanne Higginbottom joined me when she was 22. She’s come a long way over the years. She is a formidable composer now. I have Lorena Perez Batista and Mattias Ambrogi-Torres here too.

If we’re working on a record, someone might need to do a Melodyne pass, while someone else may handle drum editing. I try and cultivate an enjoyment of music and to not lose sight of the love we have for what we do – the pressure around us can be blinding sometimes, the time constraints can be harrowing and our hours can be ridiculous. This year has been nuts. We’ve been working 75-90 hours a week. But we have a relaxed, conversational way of working. It’s very intuitive.

Having a dedicated and multi-skilled team allows you to spread your projects far and wide. Tell us about the live show for Cirque du Soleil.

Lorena has been almost full-time on that show. She distils all of the change notes that come in. They’re rehearsing and developing that show live. There’s no performer with in-ear monitors or anything. It’s a very analogue process. Lorena watches the performance videos filmed at the Las Vegas venue every day. Using those, alongside the hundred or so emails we get, we decipher how to tweak the music so that it’s up to date with where they’re at because once they start working with the performers the timings can change. The music cues I wrote maybe eight to 13-minutes long and there are many tempo and key changes.

Sometimes they might want to swap a part out because the choreographer may feel: “Oh, this would pop if we did this two minutes earlier in the track.” At that point, Lorena will go back and rebuild my Pro Tools session. I used live-recorded audio for everything in the show. It’s all real guitars through an amplifier, not an amp modeller. We try to preserve the performances but, when necessary, I’ll go back and rewrite and re-record a section of music so that the overall chapter flows better for the show. But to keep track of those projects when you’re talking about several hundred tracks of audio is a huge undertaking.

How did you get started and what draws you to such a diverse range of projects?

From my earliest years, I listened to a broad spectrum of music and was always fascinated with production. Whether it was a pop record, something progressive or a jazz album, I always paid close attention to the production and the arrangements. As I began, I started experimenting with different sounds and what I could do with just a guitar. I got into production quite a bit. I was always producing my bands, always writing songs with the singer. Writing for singers had a huge impact on the way I write scores for film and television, because the dialogue, to me, is the singer.

The sound of an actor’s voice is going to impact my choices. As far as the right sound palette for a project goes, the producer in me will always assess what our time and resources are to create a concept that will sound fully realised. In other words, I wasn’t trying to do Star Wars on a meagre budget. But I was also really taken by sound design and sound development. I find that to be a portal of endless surprises and that’s something that, as a musician or composer, I geek out on. For me [with sound design], I always want those sounds to be imbued with soul, so it’s often something steeped in a human expression or performance. And then we twist it from there.

I’ve always loved orchestral music and classical music. Before I got into working with orchestras, it used to bother me when I listened to rock music made with orchestral arrangements. It always seemed like those productions were made by someone who didn’t understand the music; the arrangement didn’t quite coalesce for me. When I had the opportunity to employ orchestras in my film work, I would develop their parts alongside all the non-orchestral elements.

That’s how I got into the process of recording things early and living with them, and only when the picture required that I readdress it would I do so. In my scores, all of the synth performances, the filter sweeps, they’re all live. The non-orchestral and orchestral parts are developed together to be complementary. I’m kind of a purist about the samples we use and the things that we create. I want to take the time to make sure they’re holistically integrated with the orchestra and vice versa.”

What are the parallels between the long and punishing hours of film composition and performing live with artists such as Marilyn Manson?

There’s nothing like walking out in front of 50,000 people and playing, especially if it’s music you’ve written. I’ve had the opportunity to do that with Marilyn Manson, which was a lot of fun. The immediacy of live performance is not remotely similar [to film scoring]. However, over the years, having played so many concerts both on my own and in my band, it has definitely honed my improvisational skills.

If, say, Joanne is writing a cue for a TV show, she may kick the cue up to me and say: ‘You know, I think some guitar would finish this cue off nicely’. Then I’ll have a listen and might have five minutes to record the guitar before getting back to what I’m doing. I have to be able to do that rather quickly.

What is it like having to interpret ideas and direction from film directors and studio executives who perhaps aren’t well versed in musical terminology?

That’s my job – to interpret what their direction is based on drama, rather than technical or musical terms. Obviously, in the past 15 to 20 years, film and television have seen a paradigm shift, with the immersion of pop culture in the scores. To be authentic, you have to be familiar with a wide variety. Usually, when I have a meeting with producers and directors, I may play or jam for them in the room, based on the conversation we’re having when they’re riffing about the show. Instead of them giving me formal direction, we’re just talking.

I may reiterate something in a musical phrase, whether it’s a synthesizer, a piano, a guitar or whatever. I can create a little piece of music on the spot and then the person who doesn’t speak in musical terms feels heard, and we’ve begun a musical collaboration. I’m not asking them to relate to me on my terms. I’m just being as perceptive as possible, which helps me understand what they want to communicate. Often the best collaborators know what they want to say but they’re open to many interpretations as to how to get there. That leaves a lot of space for me to be creative and to enjoy the project I’m on.