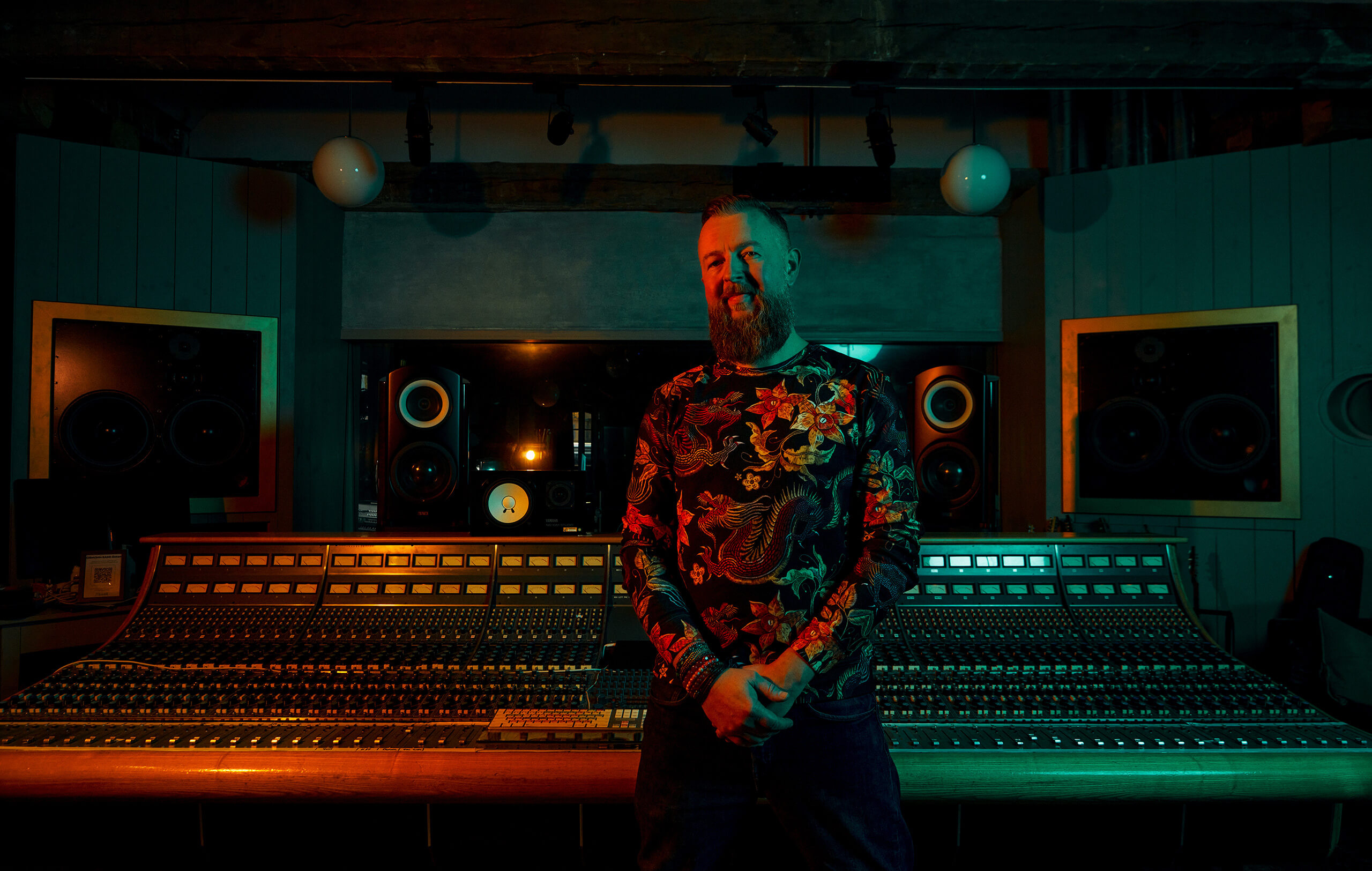 Pär Almqvist: “There’s a big, positive implication from knowing you can sample something and not be afraid of being sued”

In Stockholm, one startup is rewriting the rules of sampling, putting power – and money – back into the hands of artists.

Pär Almqvist knew he was on to something when an obscure composer of Brazilian children’s music reached out to say thanks.

As the CEO and co-founder of the online music sampling service Tracklib, Almqvist has heard from plenty of artists and labels whose songs had been unexpectedly picked up and sampled by some far-flung producer or bedroom beat-maker. But somehow, this anecdote felt different.

Since launching in 2018, Tracklib has amassed thousands of paying users who spend time digging through the site’s virtual record crates containing over 200,000 legally-cleared, ready-to-sample songs. Perhaps most notably, rapper J. Cole and his producer T-Minus used the service to find and clear the sample used on their Grammy-nominated 2019 hit MIDDLE CHILD. That single, which borrowed the horns from an early 1970s track by Philadelphia soul trio First Choice, went platinum six times over in the US and was nominated for four major music industry awards. The sample cost J. Cole’s team a grand total of $500. For First Choice, it was just one of the ways that their disco-flavoured soul jams have been given new life since the all-female trio disbanded in 1980.

By any reasonable measure, the MIDDLE CHILD example would seem to be the most obvious success story for Tracklib and its founders to tout – and they often do. But for Almqvist, there’s something about the story about Brazilian children’s music that makes him perk up in his chair.

“They put out kids’ music in Brazil!” Almqvist says, incredulously. “On the surface, it’s a pretty niche kind of music, but it just goes to show that even we don’t always know what’s going to be picked up on or be interesting.”

Almqvist is talking about Trupe Trupé, a group whose songs are most typically heard emanating through elementary schools and children’s theatres in places like Sāo Paulo. After their label made their music available on Tracklib, the band unexpectedly found their songs being sampled by producers in the UK, the US and elsewhere around the globe. With each loop of their playful, upbeat music that found its way into the DAW of a Tracklib user, Trupe Trupé saw something that’s all too rare for many musicians these days: a paycheque.

“This group was just amazed,” says Almqvist. “They’re now getting a big part of their income from people sampling their music in parts of the world that they never would have imagined.”

Trupe Trupé and First Choice aren’t the only artists reaping the often surprising benefits of being included in Tracklib’s ever-expanding catalogue of music. In a few cases, labels have even reported that Tracklib generates more in royalties than streaming services or physical album sales.

Of course, not every artist on the platform will necessarily see cheques big enough to sustain the notoriously tricky economics of existing as a musician in the digital era. But in an age when payouts from streaming services can feel painfully meagre – not to mention the challenges of making money from touring in the midst of a global pandemic – Tracklib is at least offering residual income to many artists who often struggle to find it elsewhere.

For the artist community, the potential impact of Tracklib is two-fold. In addition to the benefits of having one’s music licensed and sampled, there’s the other side of the sampling equation: the producers and musicians looking for high-quality, legal samples to use in their own tracks. For those folks, the art of sampling other people’s music has seldom been easier.

“There’s a big, positive, creative implication from just knowing that you can sample something, can afford it, and not be afraid of being sued,” says Almqvist. “Creatively, it just removes a big headache.”

This sort of clear-cut dual advantage for creatives is admittedly rare in today’s digital music economy, and to Almqvist, it’s what makes the service so unique. It’s a laudable place to be for a music-focused startup, but the journey there was by no means an easy one.

“I often tell people that after solving power in rural India, you’re ready to take on music rights”

As an entrepreneur, the Sweden-born Almqvist is no stranger to tackling exceptionally difficult problems. By 2011, he found himself in rural India helping to launch a venture called OMC that tasked itself with the ambitious mission of expanding access to electricity in some of the more remote parts of the country.

That project, Almqvist says, was inspired by an earlier venture of his that sought to expand mobile network access in rural India – another ambitious project that started hitting roadblocks once his team realised how spotty the power grid could get in that part of the world. OMC sought to rectify that by tapping into renewable energy resources like solar power and building mini-grids, an effort that won the company recognition as a World Economic Forum Technology Pioneer in 2014.

“I often tell people that after solving power in rural India, you’re ready to take on music rights,” jokes Almqvist. “It’s even more complex in many ways.”

It’s only a slight exaggeration. By the time Tracklib went live in 2018, the team had been busy toiling away for four years, building out a first-of-its-kind platform, convincing investors to take a risk on a new concept, and negotiating with often sceptical record labels and music rights holders.

“That was easily the biggest hurdle: getting buy-in from the industry for this,” Almqvist says. “That took a long time.”

In an industry that is historically slow to embrace new technologies and business models, it comes as little surprise that record labels and other traditional music industry gatekeepers were the ones who needed the most convincing before Tracklib could go live. This was famously the case with the shift toward streaming services like Spotify and Apple Music a decade ago, with that much-needed industry buy-in coming only after file-sharing had helped ravage music label revenue for years.

For the music industry, the art of sampling has been a source of tension and legal complexity since it was first popularised in the late 1970s and early 1980s. While artists had been experimenting with borrowed audio and tape loops since the musique concrète days of the 1940s – and well into the 1960s with The Beatles and Pink Floyd splicing audio from other sources into their own recordings – it wasn’t until the dawn of hip-hop that sampling truly took off as an art form.

As the use of sampling proliferated, so too did the lawsuits and complex legal questions that came with a new creative practice that involved borrowing snippets from music written and recorded by other people. By 1989, a headline in the Los Angeles Times wondered if sampling was a “license to steal” or a legitimate tool for creativity. That same year saw lawsuits against hip-hop artists like De La Soul and the Beastie Boys for their use of uncleared samples. In the case of the Beastie Boys, their adventurous use of over 100 samples on the album Paul’s Boutique went on to fuel a storm of copyright infringement claims that lingered in court until at least 2015 and is said to have cost the group over $250,000 in legal clearance fees over the years.

The complex legal questions and inner-industry tension wrought by the advent of music sampling have only continued since, pitting the likes of The Rolling Stones against The Verve (for the string sample in Bittersweet Symphony), Queen and David Bowie against Vanilla Ice (over the baseline in Ice Ice Baby) and Gilbert O’Sullivan against Biz Markie (for the piano riff sampled in Alone Again). Those are just a few of more notable examples from a rich history of sampling-fuelled litigation that could easily make for its own law school graduate program.

“Little did we know just how complex music rights are, or how challenging it is to innovate within music,” Almqvist confesses. “Sometimes, it’s a good thing when you don’t know too much beforehand.”

“Little did we know just how complex music rights are, or how challenging it is to innovate within music”

Given the fraught economic and legal history of sampling within the music industry, it’s no wonder that Tracklib took so long to launch. After all, as Almqvist is quick to point out, it’s the only service of its kind, making it a trickier sell for investors and the traditional music industry alike. “It’s hard to fund a new company when a market doesn’t exist,” he says.

While there are countless royalty-free samples available from services like Splice and Native Instruments’ Sounds.com, the Tracklib team has done the hard work of tracking down, legally clearing and curating a unique library of songs – many of which include the original stems – from a variety of established record labels and artists who actually see revenue once a sample gets used.

It’s this painstaking effort – especially the process of finding and negotiating with rights holders – that can make proper sampling such an onerous endeavour for everyday producers and recording artists. Even if a producer is successful in the process of starting the negotiation – which can take months and involve lawyers and clearance agents – they may well find that the sample they’re looking to use is prohibitively expensive, if the rightsholder is even willing to license it at all.

By eliminating such logistical roadblocks for creatives, Tracklib hopes to play its own role in further legitimising, if not outright democratising, the art of sampling in today’s digital-first music economy.

“Fundamentally, the key word is access,” says Almqvist. It’s a principle that has followed him around for much of his life, from his childhood growing up in Sweden – where music lessons are available to all citizens for free – to his later entrepreneurial efforts trying to expand access to electricity and mobile phone connectivity in rural India.

By contrast, opening up access to the isolated horn section of a late 1970s South African disco groove may seem somewhat trivial, but to Almqvist, this type of digitally-fuelled cultural exploration is nonetheless worth clearing a path for.

“At its best, technology enables access,” says Almqvist. “It enables new infrastructure and new networks and new connections between people and new opportunities. And I think that’s what’s happening in music.”