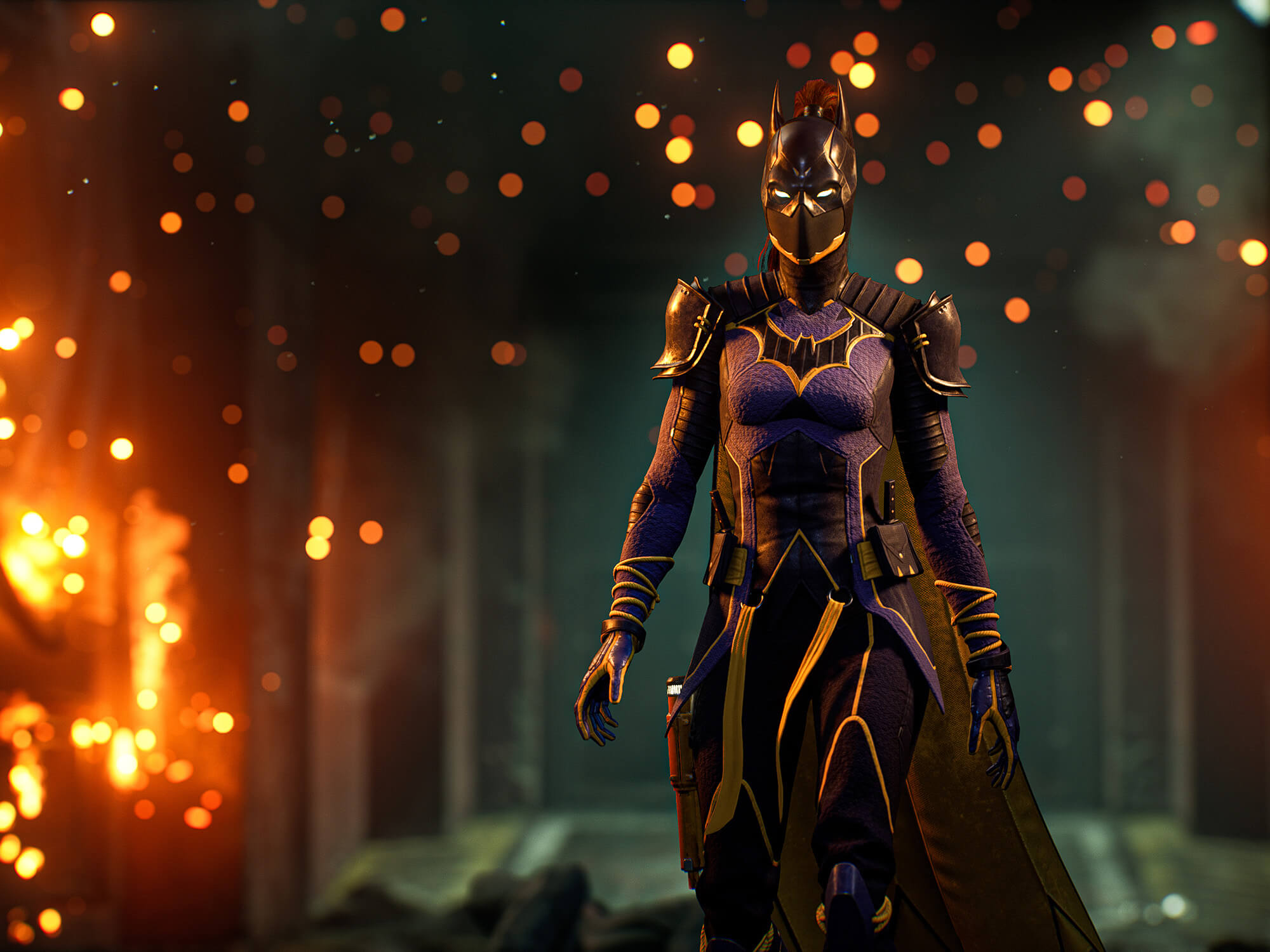 Where do you start when you’re asked to score a new video game set in the Batman universe? How do you write something that sounds original for a franchise with more than 55 years of musical history? Do you channel the energy of Danny Elfman, Hans Zimmer or, dare we say it, Prince? Perhaps the biggest question: what does Gotham sound like when it can no longer rely on Batman to protect it?

These are just some of the questions that Joe Henson and Alexis Smith, AKA The Flight, had to wrap their heads around before they set to work scoring Gotham Knights, an open-world action-RPG set in the five boroughs of Batman’s stomping ground. The Flight have plenty of experience with action games, having worked on 2017’s Horizon: Zero Dawn, 2018’s Assassin’s Creed Odyssey, and 2022’s Horizon: Forbidden West but, for them, superhero stories were uncharted territory.

“It was quite a steep learning curve for us,” Henson explains over video from the duo’s studio in London. “Everyone knows superhero music, but we had to work out what makes superhero music superhero music, and how to make it DC-specific while also working out the sound of Gotham.”

The Flight began by brushing up on their Batman lore, reading and re-watching as much material as possible. Henson grew up reading Batman comics and watching Batman TV shows. But while Gotham Knights features plenty of familiar faces and locations from the Cased Crusader’s universe, it’s an original story based around four of Batman’s former sidekicks, The Knights: Robin, Nightwing, Red Hood and Bat Girl.

“The DC universe has a history of incredible scores and the first meeting out there was intimidating,” Henson says, laughing. “You walk in and there’s this big Warner Bros logo, and then there’s a huge Batman standing at the end of a long table in the meeting room.”

While the opportunity might be intimidating, Smith also saw it as one of the most enticing elements of getting to write music for a game set in the Batman universe; a chance to write a new musical chapter in the series. Because while you can tell the difference between Elfman’s scores based on his iconic five-note melody and the bellowing orchestral blows of Hans Zimmer’s, they’re still largely similar.

“So many people have scored similar sounding things,” Smith says. “We’re never interested in just doing something that sounds like someone else; we want to put The Flight mark on it. So, for me, it was more, ‘Can we get our mark onto this when it’s something that everyone knows so well?’ And I think we did in the end.”

There have been plenty of Batman games over the years, from the side-scrolling SNES and Mega Drive titles to Rocksteady’s heavy-hitting, narrative-driven Arkham series. Gotham Knights was already well into production by the time The Flight got involved, which meant they could get hands-on early in their scoring process. 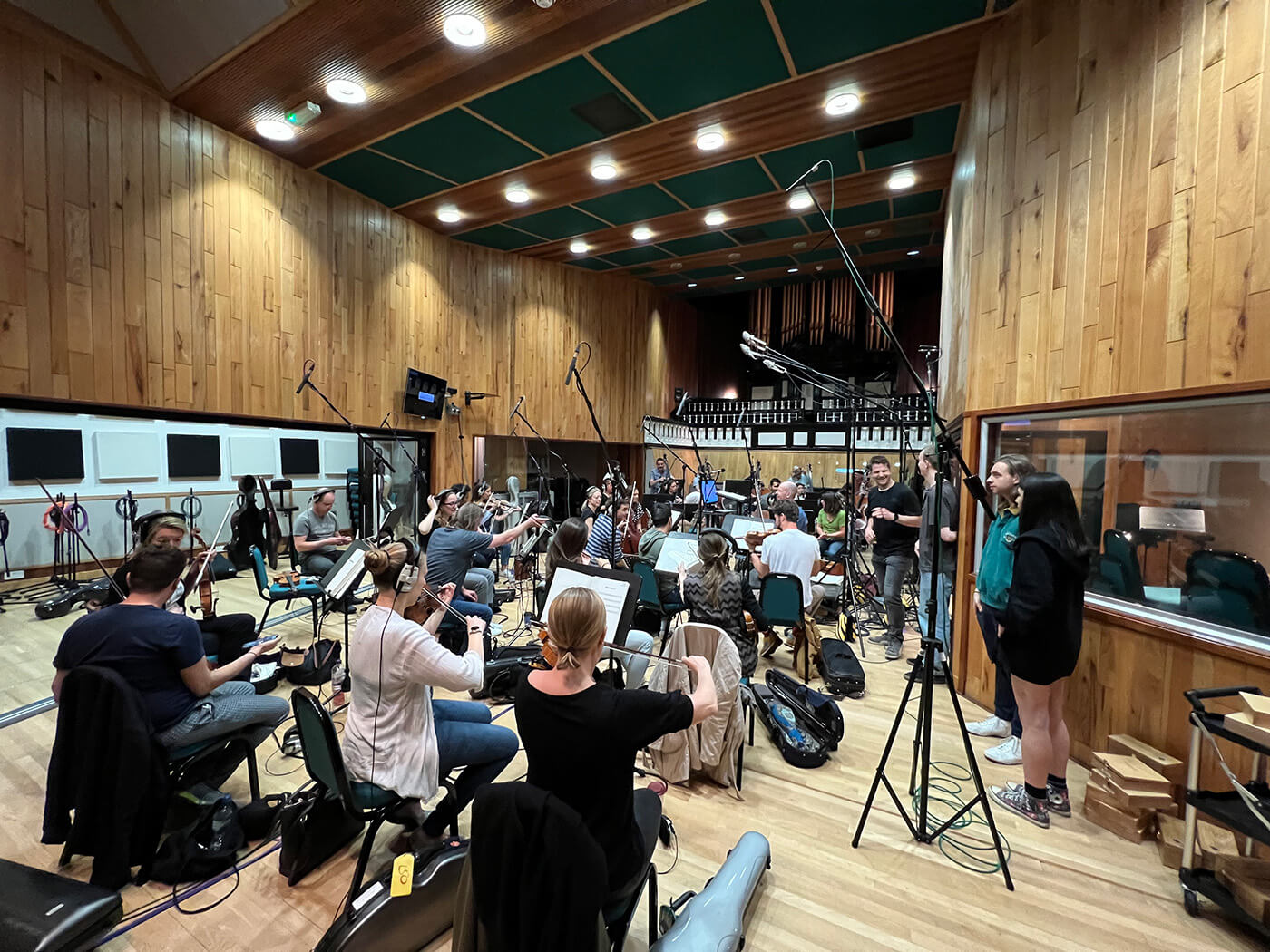 “WB Games had a very specific way they wanted things to sound,” Smith says. “They didn’t want the main parts of [the game] to sound like a Batman film, they wanted it to sound more youthful because it’s the Knights.”

All of the characters have their own stealth themes that play when you’re sneaking up on an enemy. But as soon as you enter combat, the game’s interactive music system will switch the music over to the combat theme. As you might imagine for a game starring DC’s angsty mini-heroes, these transitions happen quite a lot – and it all needs to sound consistent.

“If [the Knights] didn’t have to have this set link between tempo and energy, it would be very easy to do four completely different sounds – but that’s not what Warner Bros wanted,” says Smith. “They still wanted it to be combat music and that has to fall within a tight tempo and feel.” 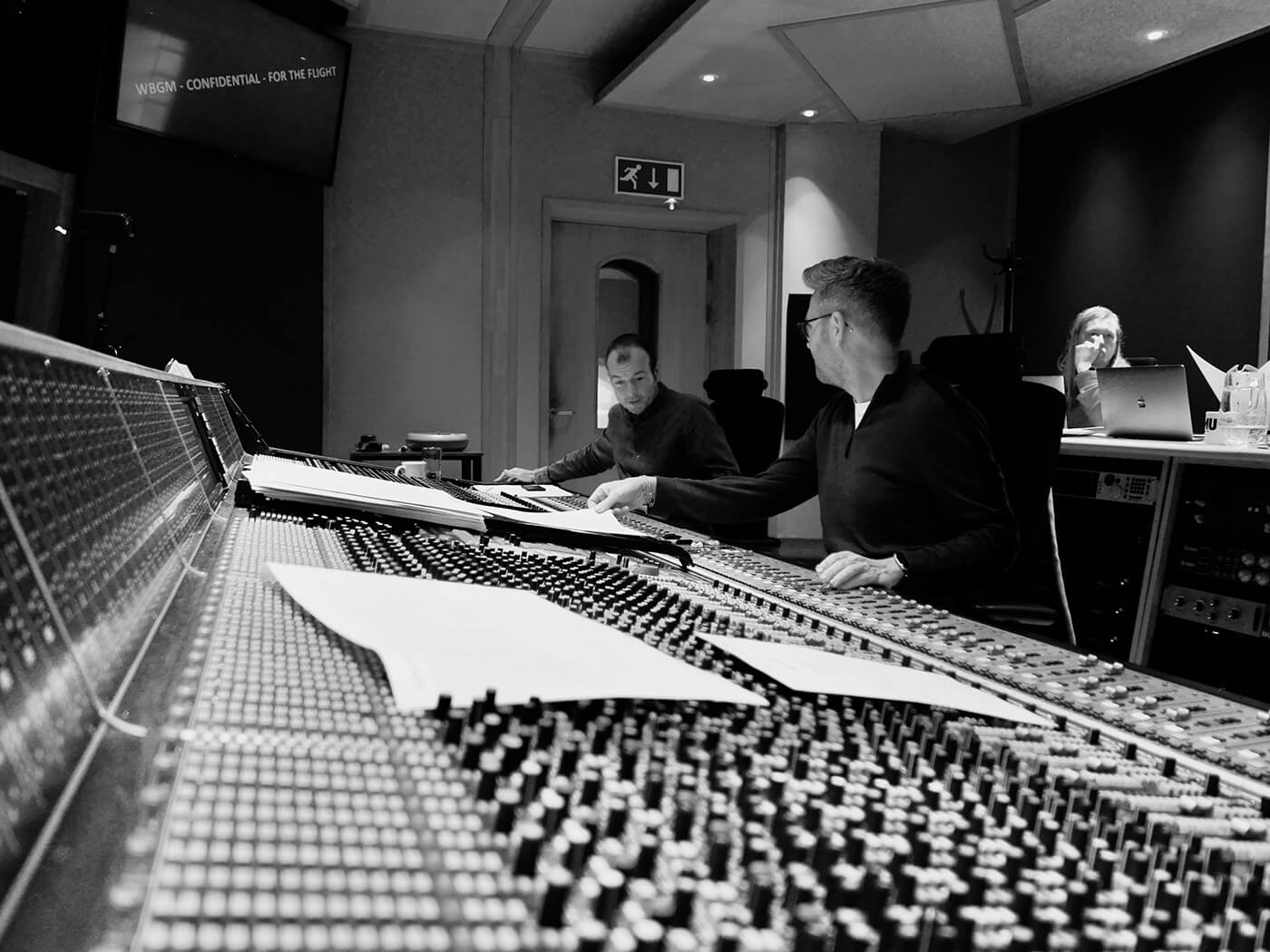 The elements in these themes align with the personalities of the specific Knights. The first time players encounter Robin, he’s in The Belfry, the Knights’ secret headquarters, wearing a hoodie and with headphones around his neck. The Flight might have written music based on Robin’s traits – young, agile, stealthy – but instead they built his musical identity by imagining the type of music he might be listening to himself.

“Maybe he listens to hip-hop and we can give him a hip-hop vibe,” Henson says. “We wanted to get an urban element from him so there are cut-up hip-hop samples and other hip-hop elements that feature in his music.”

Robin’s stealth music is a great example. Integrating hip-hop elements into the score, however, posed a challenge given how upbeat the combat music needed to be.

“It’s not easy, because all of the fight music is uptempo,” Smith says. “Most of the fight music for the Knights is around 140bpm and you can’t do hip-hop at 140bpm. Warner Bros didn’t want it to sound like dubstep, two-step or drum ’n’ bass, so we had to find a way of getting those grime and hip-hop elements into what’s essentially a piece of superhero fight music.” 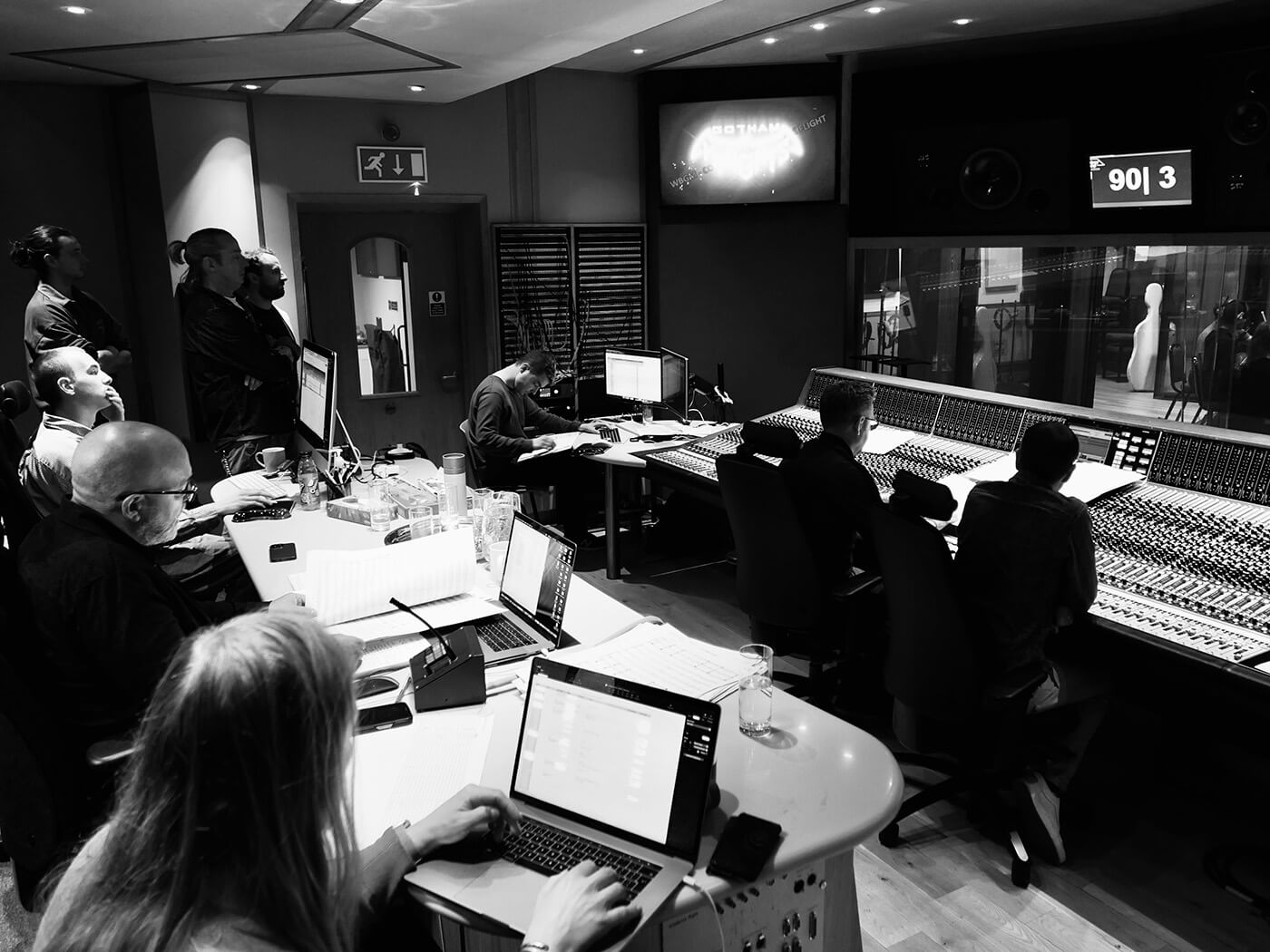 As for the other Knights, Redhood is slow-moving, a heavy hitter – your typical tank. His music features heavy guitars and aggressive synths. Nightwing is the fastest character in the game, his sections scored using chopped-up orchestral sections and a faster tempo than the rest of the Knights. Batgirl’s similarities with Batman mean that her music is the closest to what you might call traditional superhero music, only underlined by electronic influences and heavy beats.

To maintain consistency between the Knights, The Flight began every project by collecting and distilling sounds and samples into the most useful library.

“We’ve already done quite a lot of work before we write a piece, so there’s always going to be links in the drums, BPMs and the sounds we’re using,” Smith explains.

“It’s nice to apply rules to specific elements,” Henson says. “In other games, we usually do it with the map, but with Gotham Knights, we did it for the Knights.”

The Gotham City you explore in Gotham Knights is depicted in a new light – quite literally. The five boroughs have been given a Cyberpunk 2077-style makeover, with acidic, neon hues splashed over the tired greys and blues you might typically associate with the Dark Knight’s hometown. The bright palette inspired the direction The Flight took with their musical colour.

“We could instantly see why they’d come to us,” says Smith. “Because they wanted that grit – not just 100 per cent orchestral music but lots of electronics and synth too. [Warner Bros] were very advanced in their art style and production style, so the first part of the project was just getting our music to fit with that vibe.”

More than 20 synthesizers make up the Gotham Knights soundscape. They range from the Roland Juno-60 and Korg MS-10 to the Korg ARP Odyssey and Control Synthesis Deep Bass Nine. The score’s driving force, however, is the Black Corporation Deckard’s Dream synth, which gives Gotham Knights its darker sound by padding out orchestral sections, particularly in the character themes.

“It’s basically a recreation of the Yamaha CS-80 and we use it a lot,” Henson says. “That’s the sound of Gotham.”

Gotham Knights’ music supervisor, Benoit Lafrance, wanted Gotham City’s soundscape to be permeated with distorted guitar and bass sounds. It was an idea that Henson and Smith quickly took to, given their first instruments are bass guitar and electric guitar. Rather than shredding and histrionics, the duo deployed the guitar in a more textural way, adding layers of sound and enhancing the score’s orchestral sections.

“The guitars are just these distorted, ambient, pads that we run through pedals,” says Smith.”They go with the upper string sections to give it that edge of filth.” The Flight’s studio looks like a Gear4Music showroom. Dr Scientist’s The Elements overdrive pedal, a JHS Packrat, an EHX Big Muff, the Caroline Guitar Company Météore reverb and an Erica Synths Zen Delay are just a few of the pedals visible in the background. “We like to play stuff together as much as possible.”

Playing together wasn’t always an option on Gotham Knights. As The Flight began work on the project in 2019, Covid-19 restrictions meant they had to transition to working in remote studios. Working apart was a strange experience, but 10 years of working together meant they quickly settled into new workflows – even if it was slightly less fun. “The fun in music is those little moments of chaos – playing to each other and all of that stuff you get to do with people in a room,” Smith says.

The Flight’s aim was to put their own stamp on superhero music. Judging by the wild mash-up of distorted guitars and jagged hip-hop beats wrapped around string sections from The Chamber Orchestra of London, we’d say they’ve done just that.