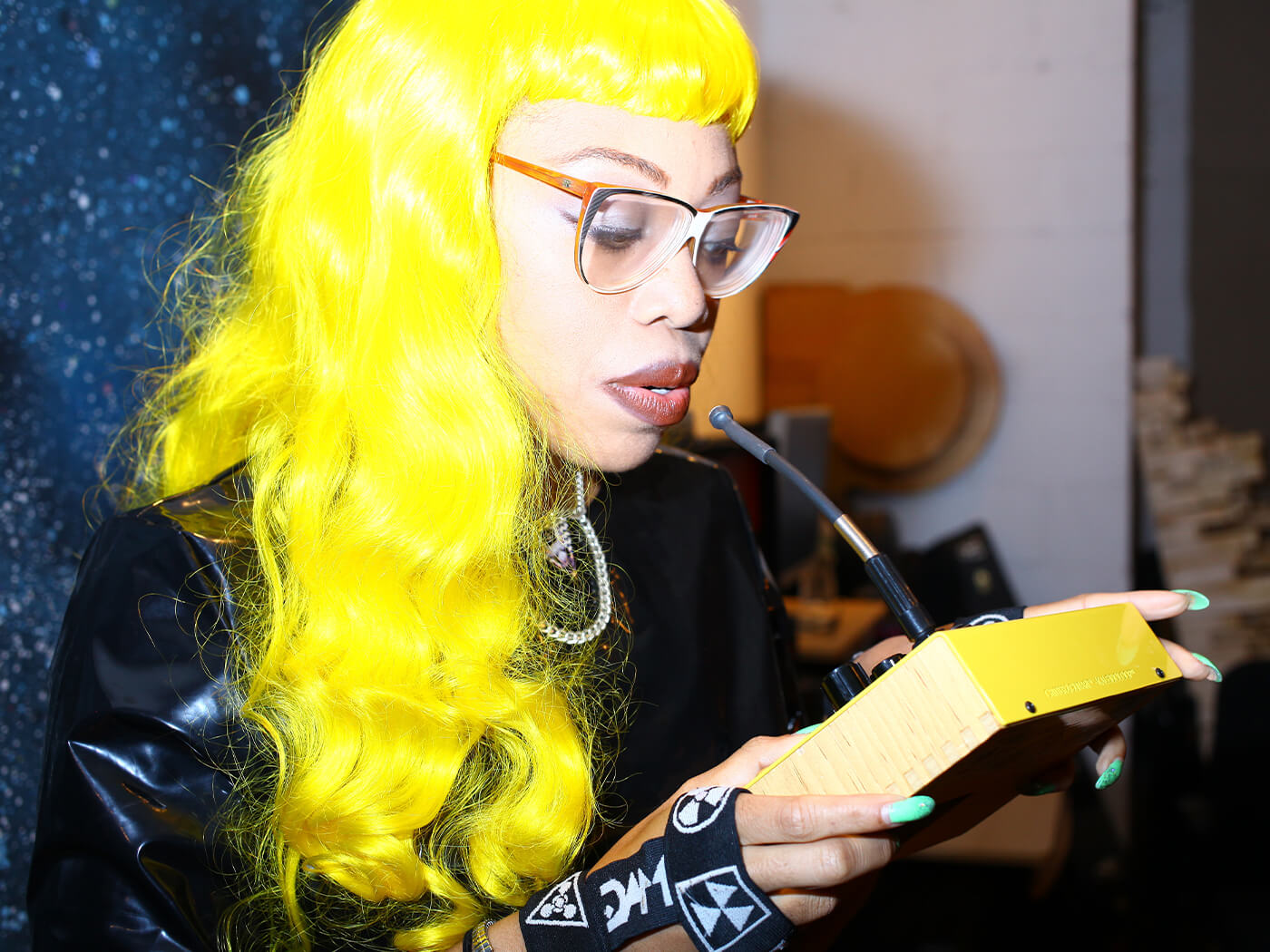 Suzi Analogue in the studio with a Critter and Guitari device

While flicking through her mother’s photo albums as a young child, Suzi Analogue AKA Maya Shipman, became aware that she wanted to savour the beautiful moments she could from life. At around the age of nine, the producer, collaborator and label-owner began recording herself to cassette tape, and it was then that she knew she “had found [her] thing”.

“I believe in the power of archiving pieces of culture that we can be informed by into the future”, Shipman proclaims. Growing up, she recorded radio shows, jingles and her voice to cassette. “I was just obsessed with that,” she says. And this obsession laid the foundation for her sampling style. She explains, “If somebody says something funny or crazy, I need to take it down, to work it into the music.”

Shipman also understands the cross-generational connective power of sampling. Her introduction was via 70s songs reinvented in the hits of the 90s. Still, Green Velvet’s 1992 hit Percolator is an all-time favourite track for the artist, and the ultimate testament to the powerful sampling tradition she is so inspired by, not least for its latest reinterpretation as City Girls’ Twerkolater.

“‘It’s time for the percolator.’ That’s it. Five words. And now the way he said it is an iconic sample.”

For Shipman, who was born with a photographic memory, sampling is analogous to her listening experience, allowing her to “freeze time” with sound. Alongside her photographic memory, the artist is a synaesthete, meaning that a sound triggers visual stimuli. Listening to Percolator, Shipman could zoom in on “the feeling, the quality and the tone of the voice” as it repeats. “With my synaesthesia, I’m just dissecting the accent, what is human, what is relatable about the sample. Songs like that got me excited as a kid,” she says.

Over two decades later, the trademarks of Suzi Analogue’s music are using friends’ recordings, repeated mantras, and manipulated speech. Also underpinning her music is an appreciation for the sonic qualities of language she gained from hip-hop.

“I found it so beautiful; words and speaking are percussive. Words are just these sounds, and they have all this characterisation. And so just because I’m obsessed with sound, I’m equally obsessed with words,” she says.

Suzi’s Su Casa EP performs this same practice of word-sampling in a diverse, three-track snapshot of her experiences post-pandemic. The work includes the colourful Like, Like, in which she repeats the mantra “like fire, like water, like earth, like air” over an arpeggiated, game-like synth line. Shipman explains: “It’s actually like a meditation because I was starting to feel so much anxiety, and the arpeggiation had something soothing about it for me”.

The lyrics address Shipman’s own desire to reconnect with nature during quarantine; “even though I’m stuck inside my house and I don’t know what’s going on, I’m still on this planet with everyone else,” she explains.

The EP’s title comes from the Spanish for ‘home’ and features samples from the many native Spanish speakers in Miami, where Shipman’s currently lives. She reasons: “adding in Spanish to some of my song titles is natural to my environment”.

In the 160 BPM Like, Like and in the EP’s driving, electropunk closer,PPL PWR, Shipman draws inspiration from her most recent tours; she flew straight home from a show in London as global travel bans were announced.

Back in her Miami studio, Shipman attempted to capture the fast-paced excitement of touring, gravitating towards the polyrhythmic potential of her Moog Subharmonicon. She set out to make house music, “technically, literally house music,” she quips – from home.

Instead, Shipman quickly found that she was expressing her anxiety in the face of a global pandemic and anger at police brutality, racial violence and the governance of COVID-19 in her country. Speaking of track PPL PWR, Shipman describes her desire to create a protest song, something which commands: “Let’s go, let’s get it”. Shipman says she composed the track around the central synth line – “that sixteenth note, bouncing and arpeggiating is really driving,” she says.

Not only has COVID-19 seen Suzi Analogue creating new home-inspired soundworlds on record, but she’s also been reinventing her live shows for the digital sphere.

“I was scheduled to play shows in real life that got cancelled or postponed. They started having online streaming events, so I was finding ways at that time to innovate my live performance”. However, she quickly acknowledges the new world of streaming gigs as a separate craft from her Suzi Analogue live sets.

“I feel that live music is very sacred. So I was like, ‘I’m going to give you an experience’, but I found new ways to play the music and experiment. I use Ableton Live, so I’m able to rearrange my sets and create points of emphasis for my live improvisations”.

The artist has also had to reshape her collaborative processes in the wake of the pandemic. She does this by hosting hangouts with her Never Normal Records collective on Twitch. “We do something called Smoke Sessions, which is just like a kickback, a hang out to just listen to the music while people play video games or talk or smoke together. That level of interaction is so important for me”.

Shipman has also been beat-making online with Ugandan collective ANTI-MASS, a valuable source of collaboration for a community of self-isolating producers. The project rejuvenated Shipman’s desire to play “all together in real-life – and be transformed by each other in positive ways”.

For Never Normal Records, Shipman’s belief in the importance of being “all together” has founding significance. “The majority of the artists [in the NNR collective] I met at shows, and that’s how I would get to know about their music”, Shipman remembers.

Never Normal Records brings together – in the most physical sense – Afro-diasporic artists who, Shipman says, “have an awareness of their own history, their personal histories and diasporic histories, and are able to fuse them in a futuristic way”.

The collective’s recent show from Times Square for The Lot Radio was a perfect realisation of the community-building she describes, uniting Chicago-native HEAVEE, Brooklynite RaFia, Atlanta’s NO EYES and Shipman herself from Miami.

“We all represent the sounds of what inspires us in our locales”, Shipman explains, listeners “can just tap into music and the different beats for different areas. I love that idea because that’s how I grew up loving music, just going on a journey with the sound”.

As a child, Shipman would listen to “B-more club, or Philly club, or Jersey Club” and formulate an impression of each place, “their cultural power and their own flavour that they bring to society”. However, it is hip-hop which Shipman credits most for teaching her about local scenes.

Listening to the polished R’n’B of the 1990s and 2000s, she says it was not always clear which city the artists came from. “But hip-hop? You have to know, oh, this is from Detroit, from LA, from Compton. That really just gave me an understanding to celebrate the many areas – to make music about where we’re from with our own sound that we enjoy and understand.”

Shipman’s catalogue is rich with this celebration of locality, not least her four-part ZONEZ series. She draws sonic inspiration from “listening to music and listening to what was in [her] head” as she travelled around New York, commuting from the Bronx in the north of the city to the southern borough of Brooklyn.

“Going out into the world is the biggest thing when you’re in a slump; it’s because you can’t get out of your head.”

Shipman confesses, “it’s all about transit for me” and has even created a narrow, vehicle-like studio set-up to mimic this experience of transit. “I liken it to a car. I have a gamer’s chair in there, so I just lean back and listen.”

For all those feeling uninspired, Shipman swears by the remedial power of “going out into the world.” That’s not just about immersing yourself in your local music scene but listening to the sounds of your environment.

“This is the biggest thing when you feel like you’re in a slump like that; it’s because you can’t get out of your head.”

Given Shipman’s passion for the archival potential of recording, it’s perhaps little surprise that she champions analogue recording for its tendency to capture the idiosyncrasies of a session. She explains that “patching synths and routing things” provides an “innate way to communicate, more than a finishing quality”.

“We recorded my newest single, Super Smooth, on reel-to-reel tape. When this all starts, we’re rolling the tape, and there’s a little silence gap. It’s like a little white noise that happens before the beat drops. And I’m so happy it’s there – it makes it real.”

For Suzi Analogue, analogue recording allows for communication of a human identity and helps her avoid the pitfalls of perfectionism. She muses: “I just want people to know that I was a human [through the recordings] because of my experiences growing up, listening to things like Percolator. Hearing how raw that vocal sample is; it wasn’t super clear, but it hit!”

While Shipman celebrates this ‘rawness’, she also attributes her lifelong love affair with analogue to the technical mastery behind her favourite recordings of the 80s and 90s. Shipman gives the example of Brandy and Monica’s 1998 hit The Boy Is Mine. After meeting the track’s engineer on a panel, Shipman learned that the song had been recorded to tape on two different coasts, sent by mail and masterfully spliced together by hand. “That’s why it’s so, so on point. There’s not a melody out of harmony or out of place on that track.”

For Shipman, analogue recording provides the versatility to create tracks like Supersmooth, in which she aims to get the clean Boy-Is-Mine vibe, and LOUDR, a distorted, electro-punk explosion of shouted energy. In both cases, Shipman concludes: “My recording techniques are for emphasis of what I want people to feel”.

Despite the artist’s choice of stage name, her vast knowledge of analogue recording and lifelong admiration for the attention to detail required to make tracks like The Boy Is Mine, she is far from your typical studio hoarder. Shipman advises that the best workflow requires “you just have the things that you like around you”.

She’s not one to fill every square inch of the studio with hardware, insisting that having some clear space can make a more productive environment. “That might be where you put your notebook – and you didn’t have a space for that before because you had all this gear!” she laughs.

She likens the process of recording to having a lock, where the master key symbolises one’s technique, and each piece of equipment becomes a groove of the lock. The better you know all of your gear, the easier you will find it to “unlock and fully get into your zone”. In other words, each studio should be a personal fit above all else.

Rather than pining after the latest gear, Shipman argues that the most important thing is to experiment and “commit” to your way of doing things. “Whatever your process, whatever your space looks like, whatever equipment you have around you”.

She also warns against expecting Youtube tutorials to “teach you how to do it”, and treating them like a textbook means “you will get bored”.

Shipman encourages producers instead to keep themselves “curious about sound itself” and explore the limits of their equipment. This is the best way to become truly “happy with your process,” she says, and to create music that archives your individual creative process – indeed a welcome goal for any music-maker.