by Will Betts
#Artist/Producer/DJ#Performing
Features

“You have to treat your body and your mind like an athlete”: Steve Aoki on touring

The producer shares his tips on how to stay healthy while on the road, keeping your sets interesting and the do’s and don’ts of stage etiquette. 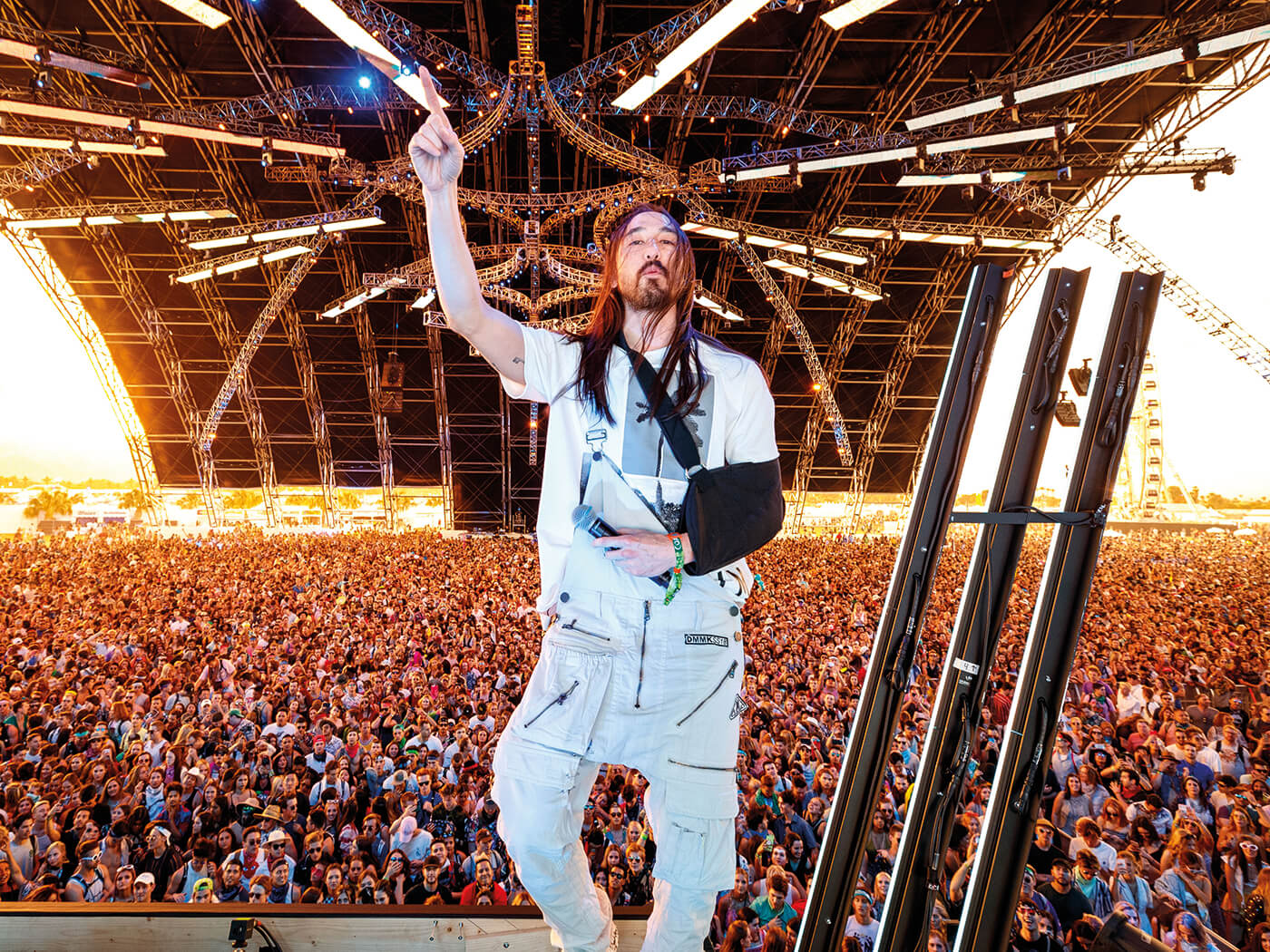 Success brings pressure along with it – and the stress of long periods of touring can take its toll both physically and mentally. “DJ’ing over 200 shows a year can be taxing and can get lonely,” says the 41-year-old globe-trotting DJ Steve Aoki.

“If you go into it cold, you can fall out pretty easily. Being away from home and being away from family and friends, and constantly moving at that pace is really tough,” he tells us. “When you’ve been doing it for a while, you start learning different disciplines that can help you stay sane, stay healthy and, most importantly, stay positive while on the road.”

One of Aoki’s secrets for keeping his endorphins and excitement up during a tour is a good dose of exercise. “Right when you get to the hotel room, get to a gym,” he suggests. “That window will start closing very fast – as far as when you’re going to work out – if you lay on your bed, or if you get some food right away. Just try and do a quick workout if you can.

“You don’t necessarily need the weights and equipment,” he says, encouraging simple body-weight exercises. So committed to fitness is the touring DJ/producer that he has even launched his own fitness app called Aoki Bootcamp via the Neou app, based on his impromptu workouts. As any touring musician will know, it’s not always easy to eat healthily while on the road, but it’s another cornerstone of Aoki’s longevity. “I love trying different foods, but for the most part, I try to eat healthy. I try to eat lean. And it also helps me to be more nimble and more active when I’m DJ’ing. I just have more energy,” says Aoki.

“You have to treat your body and your mind like an athlete when you’re on the road,” says the globe-trotting DJ, adding: “I think if you do that and you’re professional about your career, you can have marathons as far as the way you think about life, instead of doing sprints. You can outlast what you think your human potential is.”

When you’re performing as many shows as Aoki does, set preparation is vital. “I prepare each DJ set based on where I’m playing,” he says. Both the environment and set length play a part in this process. For example, his club sets and festival shows differ in content. “In Vegas [where Aoki has a residency], I kind of freeform, have fun and play new songs, new mash-ups in with Aoki music. When I’m playing festivals, depending on the festival, I am playing a more traditional style set list of more of my own music,” he tells us.

As a man who has performed extensively across the globe, Aoki is well positioned to offer advice on tailoring sets to new audiences. “If you’re playing to a new country you haven’t been to, you want to play more of your classics, songs they might have heard far in the past. You want to dig a little deeper in your archives and you want to drop those in there.”

When asked how he keeps his live sets fresh, Aoki’s answer is no-nonsense. “Play new records. Because what does fresh mean? It just means new. So for me, personally, that keeps my sets fresh. Whenever I play a new song, I’m just more excited, to be honest with you,” he says, with the caveat: “Unless you play one of your classics that everyone is singing along to. Then you feel that energy rush.”

Creating that space for audience participation in tracks prepared for festival-style concerts just involves “a couple of edits with a couple sing along sections,” says Aoki. In contrast, “if I’m playing something more low key, doing a surprise set, I want to be able to be agile and diverse and play all different kinds of genres”.

For aspiring DJs, preparing a good set is also about knowing where you are in the line-up, says Aoki. “If you’re an opening DJ, you have to think about how you’re communicating with the crowd. What kind of set you want to play. If you want to play more of a house or techno set, you want to play some songs people are familiar with. You’re opening, so you want to have that familiarity there,” he says. And this has to balance against educating the audience and sharing new tracks: “You want to play songs where people want to know who made the song, or what the song is about,” he recommends.

For Aoki, engaging the crowd involves much more than just music, and his high-energy stage antics are notoriously divisive. The fact that he steps away from the decks to throw cakes at fans and even crowd surf in a rubber dinghy while his set plays, is considered by some DJ’ing purists to be a step too far.

Nevertheless, there are a few things that Aoki himself considers unacceptable for DJs to do during a show. “I think if you’re a DJ and there’s a DJ after you playing, you don’t play their music. That’s protocol. It’s like an unwritten rule. If you’re opening and a bigger DJ is playing, don’t play all the hits back to back. That’s also not fair to the guy or girl whose show it is. You have to respect that,” he advises.

There has to be balance, though. “Always have a level of respect for the person that is headlining in front of you. At the same time, you don’t want to compromise your style or personality. I think that’s what people want to see,” he says.

“I think the most important thing is to have fun,” says the famously energetic performer. “Make your sets so that you know you’re going to have a good time. Don’t be stressed out. Enjoy yourself because, at the end of the day, how you look behind the DJ set matters. If you’re sad, people will get sad and if you’re happy, people will be happy. Remember that.”

Read about Steve’s writing process, his tips on finding your sound, who he considers the world’s best DJs, and learn what his favourite gear is.