The Grammy-nominated duo explain why the first take is so often the best, and what they miss in their lockdown studio. 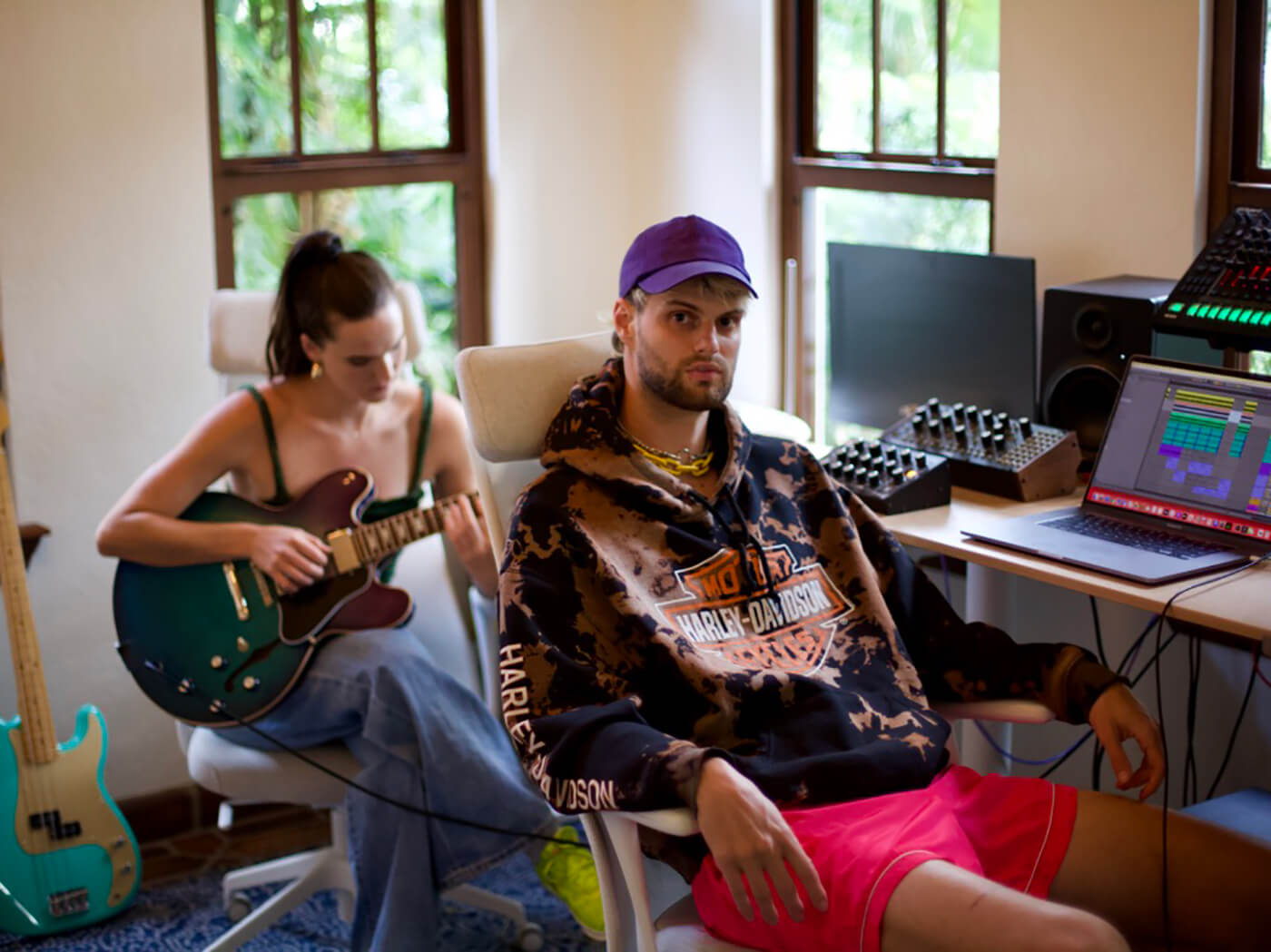 Grammy-nominated duo Sofi Tukker have clocked up millions of streams and garnered a global following since their debut EP Soft Animals dropped almost four years ago.

After a recent collaboration with Gorgon City that accidentally set the mood during a global pandemic, the pair have been using their new lockdown life to work on new music and build an army of fans via livestreaming, and are now ready to take on the world as soon as they are able. We caught up with them in their studio to talk House Arrest, tech riders and studio staples.

What are your earliest memories of music and electronic music?

Sophie: I learnt a lot about electronic music from Tucker. We started off with contrasting musical tastes. I was really into Brazilian bossa nova when we first met, and that was almost exclusively what I was making, plus hints of jazz and folk. But now, I love electronic music and I love DJ’ing. I feel really happy in that world. We’ve definitely rubbed off on each other.

Tucker: My first musical memory is The House of the Rising Sun. We had an old Casio piano that self-made songs, and that was one of the options. My dad used to hit that button, pretend he was playing the piano and just wail that song. When I was growing up, my parents had me listening to a lot of disco too.

How does music technology influence your sound?

Tucker: The computer is the backbone of our music. I’ve always produced on my laptop. My go-to gear includes the Roland TR-8S drum machine, which finds its way into almost all our productions. I love the Moog Minitaur and Mother-32 too.

Sophie: We like to keep our music pretty raw. We like to add live elements, particularly guitar, and we don’t overly quantise everything. Often, the first vocal take is the final take too. We like to keep the rawness and original emotion from when the track was first inspired.

Tell us about House Arrest, your collaboration with Gorgon City.

Sophie: We started House Arrest about a year ago. I broke my foot on stage in Australia and we had to take a couple of months off touring. During that time, we started this thing called House Tuesday, where we’d invite our friends over to jam with electronic instruments.

Tucker: At first, we were talking about house arrest in the context of a broken foot and as a metaphor for house music. It took on a whole new meaning when COVID-19 hit though. Gorgon City started working on it and, when they sent it back, we were a week into quarantine. So we wrote the second verse and rushed it out. Never before has there been a time when the whole world was going through something so similar all at the same time.

Tell us about your lockdown studio and how it differs from your actual studio.

Sophie: We are usually on tour and don’t have the opportunity to make music in a studio. Now that we’re in lockdown, it’s been amazing to be in a studio. What’s key for us is having a subwoofer along with the main monitor speakers. Our interface is the Apogee Ensemble Thunderbolt, which we run everything through.

Tucker: Maybe a Moog Voyager. We used to have one in the studio but it belonged to a friend. We miss it dearly.

How have you been coping during the pandemic? Have you managed to stay creative?

Sophie: We’ve had tough days but, for the most part, we’re doing well. We started livestreaming our DJ sets 98 days ago and the community that has been building around the sets has kept us sane, creative and structured. Because we’re constantly DJ’ing and need new tracks, we’re often making new tracks or edits to play and trying them out in the sets. It has helped with the creative process to basically workshop them in the livestreams.

Have you learnt anything about yourself during this time?

Sophie: We’ve definitely learnt the power of community. The people that watch the live sets every day now have a name: the freak fam. They’re the best bunch of people ever. We feel so honoured that they gather to have a dance party with us every day. The feeling of being part of a community, even if it’s virtual, has been creatively stimulating.

Tucker: We will definitely continue to do livestreaming in some way shape or form. It’s become such a meaningful way to gather and share our love of music with people all around the world.

What’s on your DJ rider?

Sophie: We always ask for lots of coconut water. I usually bring the DJS 1000.

Tucker: Three Pioneer Nexus 2 CDJs. We used to have the DJM 900 mixer but we’re about to upgrade to the new Pioneer V10 mixer.

What’s the strangest thing you’ve seen happen while on tour?

Sophie: A couple of years ago, in Berlin, someone spilt a beer on the mixing board and the sound went out for 30 minutes. We just stood on stage trying to entertain the crowd and speak loud enough for people to hear us. It was scary. We were totally vulnerable. But it ended up being a special night. The whole crowd helped us out by singing our songs a cappella.

What are your tips for upcoming producers?

Tucker: My favourite tip is to just make music that you love, and always be your own favourite artist. Too often, we come across artists who aren’t in love with the type of music they’re making.

What’s your biggest career regret and what’s the moment you’re most proud of?

Sophie: I wish I’d learnt to DJ earlier because it brings me so much joy. The moment I’m most proud of might be right now. We didn’t know that our music would help create such a beautiful, uplifting, inclusive, kind and freaky community but I’m so proud that it has.

Tucker: I don’t think I have any regrets. Even the things that weren’t necessarily the best decisions ended up being important learning opportunities. The moment you’re most proud of is probably choosing the right person to start a band with – and I’m really proud of our relentless nature. We work hard.

Sophie: We have so much music coming out – lots of remixes, original music, collaborations. We almost have too much music. We’re super-excited.

Stay up to date with Sofi Tukker at sofitukker.com.