Shabaka Hutchings: “You need to forget the live experience when you enter the studio”

Sons of Kemet bandleader and saxophonist talks recording the acclaimed new album Black to the Future, and transforming the sound of jazz with the help of grime. 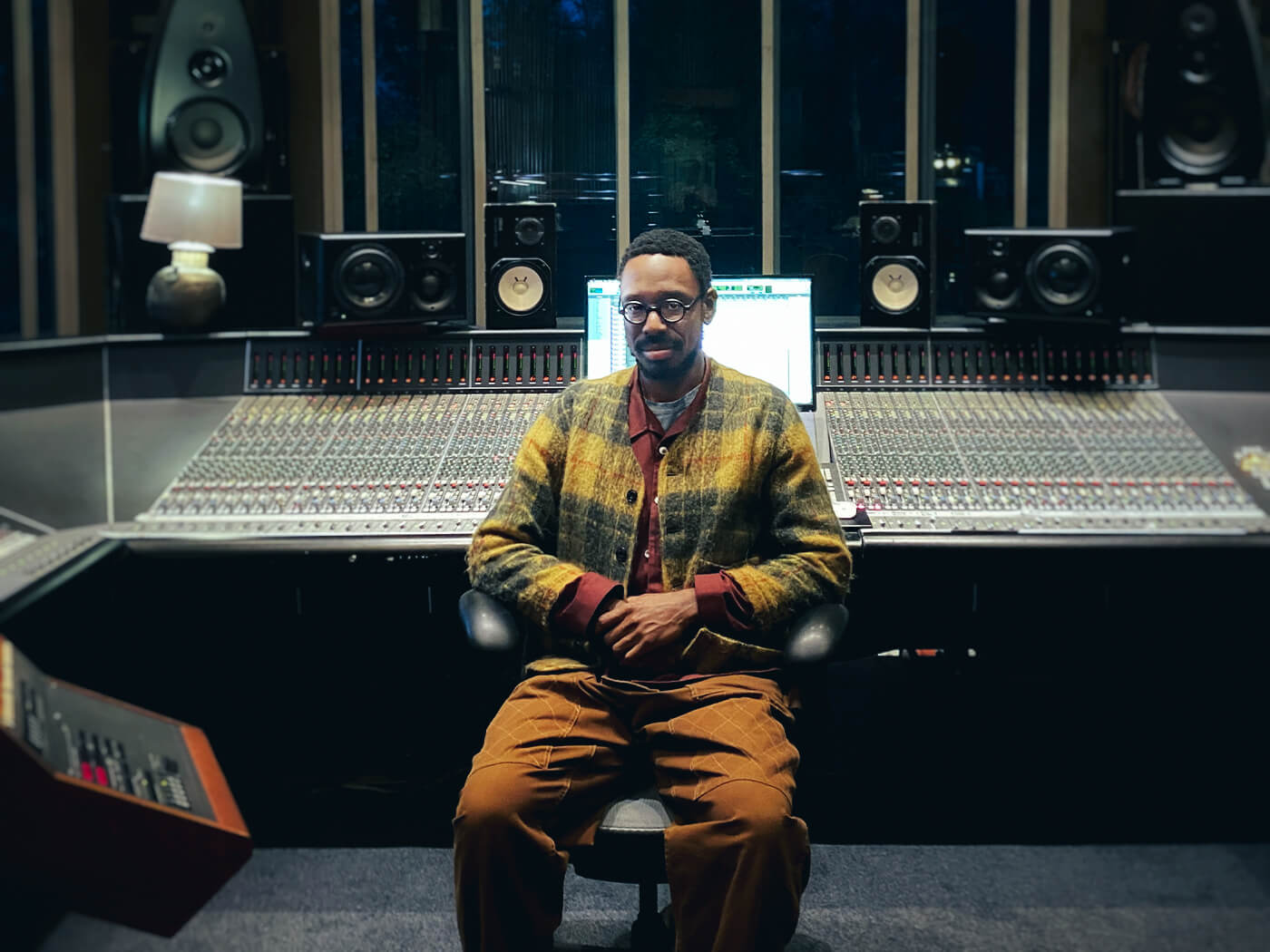 “If you said you were jazz, you’d be looked at with scorn and amusement,” he continues. “Now it’s a style of music that’s seen as cool and fresh.”

Any seismic shifts in commonly held perceptions of the genre can be, in part, attributed to the incendiary talents of Shabaka. Whether in the psychedelic voodoo synths of his band The Comet is Coming or the riotous anger of Sons of Kemet, his music, writing and performing is as potent as it is prolific.

Along with fellow innovators Moses Boyd, Nubya Garcia and Ezra Collective, Shabaka has been upturning jazz stereotypes, coming from a generation in love with the hefty beats of UK grime and drill as much as the jazz pioneers. Shabaka also attributes this change to pioneering contemporary artists such as Courtney Pine, Seb Rochford of Polar Bear and Pete Wareham of Melt Yourself Down.

“The stereotype of a jazz musician is no longer someone in a suit playing to an empty room. It’s a younger performer, playing to a diverse and up-for-it crowd. It’s very different to how it was before.”

London-born Shabaka moved to Barbados when he was six. It’s a process of relocation that led to him picking up the clarinet when he was at school and imbibing the calypso and reggae of the island.

“I started with the clarinet, mainly because I was bored rather than anything mystical,” he recalls of his youth.

“The saxophone came into my life when I was 15, just before we left Barbados. I loved this Barbadian saxophonist called Arturo Tappin. He used to play with artists such as Roberta Flack and Luther Vandross and was a big inspiration.”

When Shabaka moved back to Birmingham in the UK, saxophonist Soweto Kinch was a guiding hand, steering his artistic development.

“He’s been very important, especially in my younger years. We’d practice together, and I’d attend the jam sessions he hosted. I really learned how to play jazz through him,” he explains.

Now an established force in contemporary sonic circles, attempting to pin down Shabaka’s talents can be challenging, particularly as he records and releases music through a variety of different guises. The unifying thread binding them together is his unique playing and compositional skills.

Sons of Kemet, a four-piece outfit featuring the talents of Theon Cross on tuba and two percussionists Edward Wakili-Hick and Tom Skinner, released their debut Burn in 2013 to great acclaim. The more psychedelic movements of The Comet Is Coming took off in 2016 with their Mercury Prize-nominated Channel the Spirits, while Shabaka and the Ancestors debuted on Gilles Peterson’s Brownswood imprint the same year with their first album, Wisdom of Elders. Since then, records have come thick and fast amid a dizzying discography of quality musical output. How does he move so fluidly between each project?

“Each suggests different ways of playing because of the personalities in the bands or the individual sounds of the instruments,” says Shabaka.

“If I’m writing for Shabaka and the Ancestors as opposed to Sons of Kemet, then the personalities will point to a different type of composition and melody.”

“In the Comet is Coming, we collectively write the music so the sounds that come out are very different. At my core, I’m an improviser so when I’m presented with different stimuli, I come up with new and different ideas.”

Shabaka’s musically open mind can be heard, not only in each of his groups but also in the way their aesthetic embraces the diversity of London’s scene – from jungle to hip-hop, dub and beyond. It was seeking out these kinds of sounds alongside studying classical clarinet at London’s prestigious Guildhall School of Music & Drama that helped mould him into the player he is today. Shabaka cites a couple of key moments in his career which also led to other doors opening.

“I went on tour with Courtney Pine and this new incarnation of his Jazz Warriors known as the Afropeans. I had just finished college, so it was the first time I had been on the road. For the first time, I saw what it was to perform to a high standard, to bring that energy every single night.”

On stage, the intensity of the Sons of Kemet experience is something they’ve become loved for as much as the four records they’ve released. Their propulsive, writhing live show is impossible to argue with.

“Sons of Kemet played this gig in France about five years ago,” Shabaka recounts. “It was a last-minute opening show at a 2,000 capacity venue which we got the call for a couple of days before. But we smashed it, and suddenly we started to go forward in a very different direction, performing shows all over Europe.”

Black to the Future

Black to the Future is Sons of Kemet’s new record and perhaps their most complete artistic statement to date.

Previous album, Your Queen Is a Reptile, pays tribute to the black women in Shabaka’s life, from his great-grandmother to Harriet Tubman, a political activist who escaped slavery. Their latest album riles against UK and US politicians, distilling some of the fire of the Black Lives Matter protests and soaking their music within it.

Recording sessions took place at Livingstone Studios in North London over a matter of days. Most of the music was recorded in 2019 before the vocal performances from collaborators such as Kojey Radical and Lianne La Havas were captured last year.

“I’m very much a creature of habit when it comes to where we work,” says Shabaka of the studio space. “If I find a studio with a good vibe, set up and lighting, then I’ll likely return. But our process is to record very quickly, then spend more time on the editing and post-production.”

With Sons of Kemet, Shabaka usually brings in either musical sketches or fuller compositions for the band to use as a launchpad. From there, he wills his bandmates to energise each other to take the music as far as they can.

“You can’t and shouldn’t know too much about where you’re going when you go into a recording session,” he explains.

“I wanted us all to loosen up as a collective and get a vibe together, as opposed to everyone having their heads down and stressing out about getting the music right or not. This is more about each of us expressing ourselves as fully as possible.”

Producer Dilip Harris plays a vital role in the final edits of the band’s output. He works on the mixes and interprets Shabaka’s instructions on selecting the most worthwhile moments from their jam sessions. And although the group is much-loved for the adrenaline of their live shows, they opt for a slightly different creative tack during recording.

“You need to forget the live experience when you enter the studio – these are two different environments – and what sounds good live won’t necessarily sound good on record,” Shabaka states.

“That relentless energy sometimes needs to be curtailed in the studio so that you have somewhere to grow. For me, it’s more about the band getting into a position where it feels like we’re connected as a unit. It’s about the emotional range we find as a group.”

While Black to the Future angrily rails against the oppression of our times, Shabaka insists that his fellow musicians focus on the music rather than becoming lost in themes or concepts.

“We don’t go into these sessions thinking too much about ideas,” he reveals. “If you do, then it can end up sounding too contrived, and you’ll end up playing what you think something should be about.”

Shabaka is very much an advocate for working quickly to retain musical momentum in the recordings. Although Shabaka and Dilip invest time in setting up the room, they move through takes rapidly. Throughout the Madness, Stay Strong is one of his favourites from the album, and one of the first tracks Sons of Kemet worked on.

“We recorded it in one take – we literally entered the studio, tested the mics, did some breathing exercises, then recorded it. It started the whole thing off,” he says.

According to Shabaka, this attitude is essential if you want to get the best out of your band in the studio. Alongside staying hydrated and energised, he feels like any initial response to an idea will create the most exciting performances.

“You can focus on precision in post-production, but energy is something you can’t capture after you’ve performed. All the takes we used on the record were either the first, second, or third takes. Sometimes in our efforts to get the technical aspects of the music precise, we can lose our way from realising the music’s potential on an emotional level. It means those first performances are usually always the best.”

Another striking aspect of the record, alongside the quality of the playing and musicianship, are the collaborations, among them grime legend D Double E and Kojey Radical. Shabaka professes to be a big fan of these UK talents.

“They’re both incredible artists, and these collaborations show how close jazz, grime and music of the Afro-Caribbean diaspora are,” Shabaka states.

“If you put us together and allow us to collaborate, then we find these really exciting points of intersection and creativity.”

Shabaka’s restless creativity is no less impressive than it is inspiring. Even though the Sons of Kemet record has just been released, and he’s occupied mixing the next The Comet is Coming album at Real World Studios, composing a piece for the London Sinfonietta and teaching himself how to master the MPC to move deeper into music production.

Yet despite progressing with his projects, many of the societal wounds pulled at with this latest record regarding race and discrimination are still glaringly apparent. Shabaka believes the artist’s role is to take on these conversations and engage with them via the music.

“If you’re in the process of making an album and things come up, then it’s about finding creative and subtle ways of including it in the music,” he says.

“There’s always going to be shit happening. It’s just about increasing our understanding of where we’ve come from, how we are and where we fit. Then get peace of mind from that.”

Visit shabakahutchings.com for more. Stream the new album here. Watch the video to Pick Up Your Burning Cross from Black to the Future here. Alternatively, you can find him on Instagram.