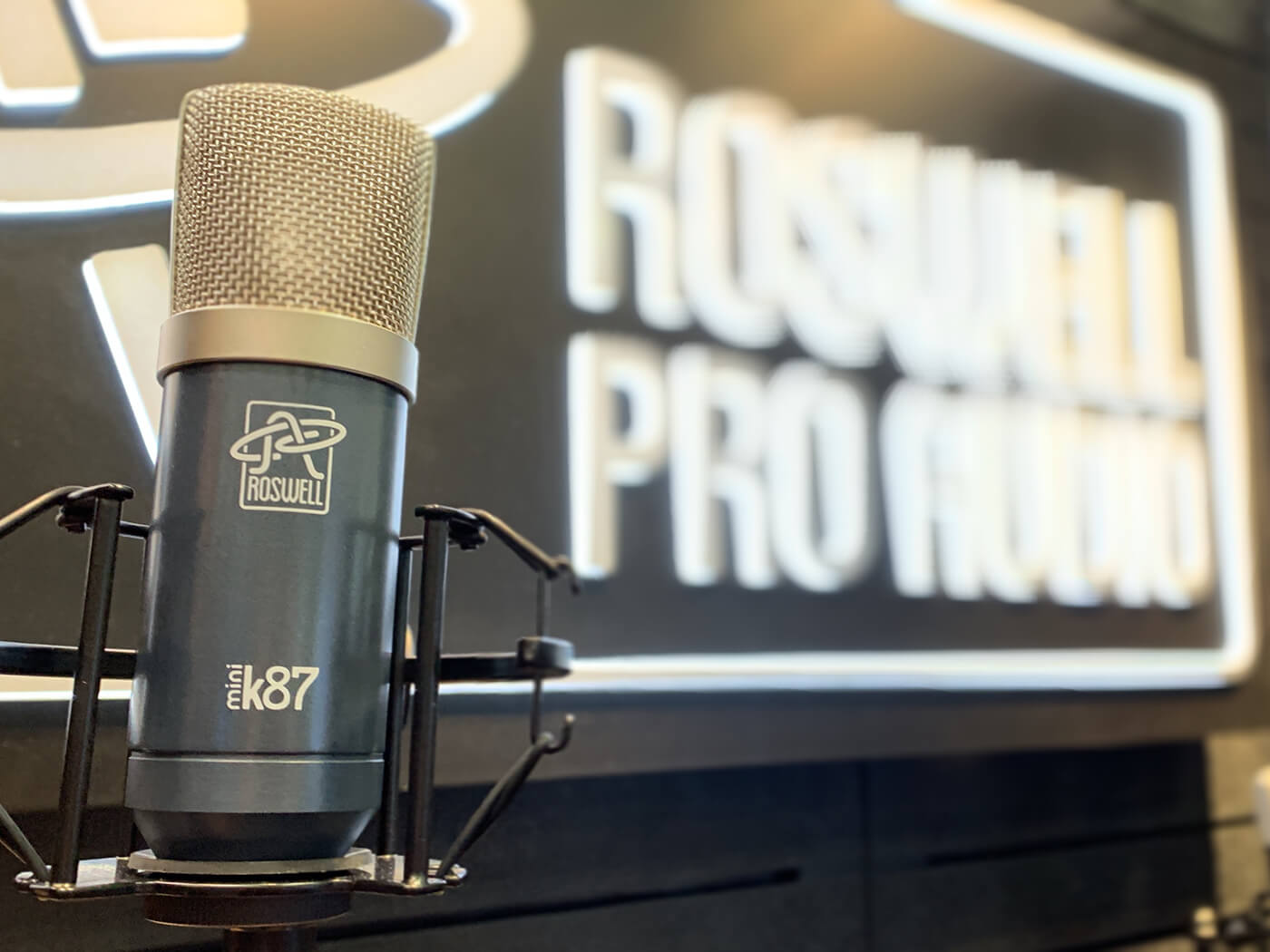 Roswell Pro’s Matt McGlynn: “This is a truly boutique mic shop, and we treat it that way”

The recording guru and business founder tells us how he competes with the mega-brands.

The microphone industry isn’t exactly spilling over with grassroots, DIY underdog success stories – but Matt McGlynn is one of them. As founder and CEO of Roswell Pro Audio, he presides over one of the US’s premiere boutique microphone manufacturers. Yet the path to get here has been far from conventional. In a series of steps that seem incremental by themselves but quite astonishing when viewed in their totality, McGlynn has grown from librarian to tinkerer to expert craftsman. And, to hear him tell it, none of this might have happened if not for an underwhelming pair of pencil mics.

Some 15 years ago, McGlynn was dealing with buyer’s remorse. “I was a musician, I was playing the drums,” he says. “Home recording was just beginning to be possible, so I started looking to buy some microphones and give this thing a go.” In the market for a pair of drum overheads, McGlynn purchased some small diaphragm condensers that, in the effort of keeping the peace, will go unnamed here. After making some test recordings, McGlynn took to the internet to get a sense of how other bedroom producers were fairing.

“I wanted to find people saying how great it was; I wanted that virtual pat on the back,” he says. Much to his dismay, he found the opposite. Despite being made by a well-known brand, these mics were not held in high esteem. As he combed through the forums, McGlynn happened across a user comment that’s stuck with him to this day: “I keep a pair of those microphones around to loan out to people I don’t like.”

Undeterred, he went back to the store and returned with a new pair of Oktava MK-012s. Channelling his inner scientist, he performed an A/B test. “I was blown away, because there was a night-and-day difference – an absolutely visceral improvement in the sound of my recording.” For most of us, that would’ve been the end of it. For McGlynn, it was just the start. “That experience made me realize, in a very deep and profound way, that the transducer in a microphone makes an incredible impact on the recording process, and I needed to know more.”

McGylnn began trying to demystify that microphone magic and, in doing so, ran up against one of the key problems of the early home recording boom: there were few reliable sources of information for buyers. “I thought it would be a real service to the community if there was a website that wasn’t a dealer and wasn’t necessarily giving recommendations – because everyone wants something different – but a place that would just have impartial info.”

From that initial idea, McGlynn would go on to found the microphone database RecordingHacks, now an indispensable resource for sound recordists. Taking up his evenings and weekends, he researched and tested any microphone he could get his hands on, and undertook some ambitious mic shootouts. He also went directly to the big brands to try and understand the ideas supporting their design and manufacturing processes. “I would go to trade shows,” says McGlynn, “introduce myself and say, ‘Look, I’d like to tell people why your microphone exists. What’s special about it? Why did you make it?’ And the better companies had really good answers to those questions.”

As McGlynn gathered details for the database, he was simultaneously learning a great deal about how the individual parts of microphones affect their overall sound. This led to a key realisation: by replacing just a few components, a bargain-bin mic could get you an exponential quality boost.

“Take a $49 mic,” he says, by way of example. “Throw a $100 capsule on it and, suddenly, that microphone sounds like it cost a whole lot more than $149.” Just like that, Micparts was born. With a bag of parts supplied by McGlynn, a soldering iron, and the website’s comprehensive how-to guides, users could get high-quality recording devices at a fraction of the usual cost.

The site was “more successful than I ever expected it to be” says McGlynn, eventually growing into a thriving community of modders, DIY enthusiasts and, unexpectedly, users who wanted to buy fully assembled and finished products. “People who had no intention of ever buying a soldering iron were buying kits and asking, ‘Can you solder it for me?’” he recalls.

By this point, he had the knowhow, contacts with suppliers, and a customer base. The possibility of designing his own mic from scratch was clearly on the horizon. But, for a time, McGlynn resisted the idea. “I’d been writing about other people’s microphones for a decade at that point and I didn’t want to compete with them,” he says. “I thought, ‘These companies have been around for 20, 30, 50 years, they have giant marketing budgets. What’s the point?’” Yet, as the demand for ‘finished’ products continued to grow on the Micparts website, eventually McGlynn decided to “roll the dice”.

From that gamble came Roswell Pro Audio, the culmination of McGlynn’s journey from dissatisfied customer to boutique microphone manufacturer. To date, the company has put out a series of studio mics that continually bat above their weight, offering a sound quality that few companies can match at their price-point. That quality doesn’t happen by accident – it requires pedantic attention to detail and an uncompromising, if time-consuming, manufacturing standard.

“I think we spend more time on our mics than anyone else,” says McGlynn. “That’s one of the reasons why so many reviewers have found that they compete with microphones that are far more expensive. Of course, that makes it harder, it means our margins are a lot thinner – but this is a passion project and it’s important to me that we deliver the highest-quality product we can.”

Roswell Pro Audio is a hands-on microphone brand, endeavouring to source as many parts as possible from within the US, and to build and test in-house. “We do all of our own assembly, and the things that are important to the sound – the circuit design and soldering, capsule voicing, component matching, JFET biasing – we do all of that in California.”

The company also follows a strict quality-control regime to ensure that “if there’s any early component failures, they happen to us and not the customer”. That means putting every mic on a ‘burn rack’ for 24 hours to condition the capacitors, to sweep each mic on an acoustic rig to check the response and sensitivity, and to rule out any noise or distortion. McGlynn says the team has the process so well refined that a batch of their Mini K47s will all be “within a half-dB in sensitivity”.

McGlynn makes clear that there are “no end of challenges to developing a microphone as a product” but, at the same time, his company has a few advantages over its competitors, including the community of audio enthusiasts at Micparts.

“For most companies, if you’re going to put out a new product, you need to make a lot of them. You need to put a budget behind it, market it, make video content about it, and send out review units to the media and influencers. By the time you’ve done all that, you’ve spent a fortune, so if it turns out to be a bad idea you’re in real trouble. But we can just put something up on Micparts, a small sample run, and see if people dig it, and if they do, we can make it.”

In turn, Roswell Pro Audio hasn’t lost the modding ethos that helped give rise to the company in the first place. “It’s possible to request customisations to our microphones, so you can really fine-tune the sound you’re looking for,” says McGlynn. “We’re capitalizing on the fact that we build in-house; it means we’re able to do circuit changes, tweak the saturation, sensitivity, padding, even tuning in some cases. It’s really not something that anyone else offers. I think we’re doing something unique in the industry.”

‘Unique’ is a word that could be used to describe just about any part of McGlynn’s tale. And, though things have come a long way from where they started, his dogged pursuit of sound quality hasn’t wavered. “I never want to be the guy who short-changes a mic,” he says. “The mics are always going to be as good as I can make them.”

It may hit the company’s bottom line but McGlynn’s standards are not just empty idealism; they’re an essential ingredient in how a boutique mic shop continues to succeed in an industry populated by giants.

“I don’t know how to build a company with an inferior product,” he says. “There’s just too much competition in the market. We need to have a product that gives people that jaw-drop reaction when they get it – that’s the only way we’ve been able to build a company.”