Plugins I Actually Use: Toyboy & Robin

The UK dance music powerhouses pulled out all the stops for their summer smasher, Think It Over 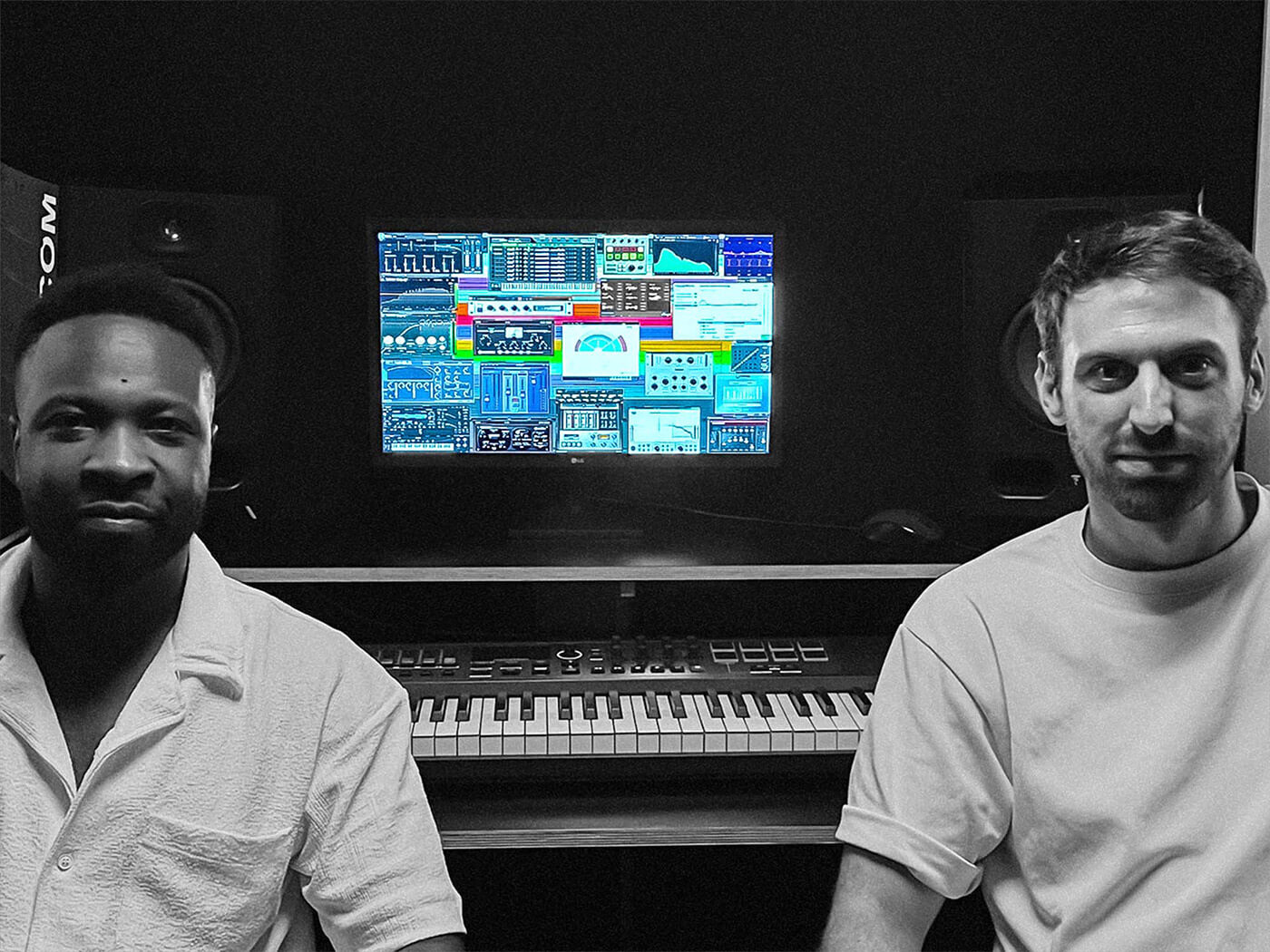 UK-based duo Toyboy & Robin are no novices when it comes to producing hands-in-the-air, festival-ready vocal house music. Their 2013 deep house classic, Jaded, right through to 2022’s remix of Nathan Dawe and Ella Henderson’s 21 Reasons, make strong cases for this.

This July, the producers – real names Toyin and Rob – returned with a carefully written and expertly produced huge house number, Think It Over, which oozes summer rays with its bright piano stabs and rich vocals from Clementine Douglas.

Here, Toyboy & Robin take a deliciously deep dive into their production techniques and plugins. So, if you’re looking to perfect your catchy, ear-pricking house music sound, then strap in. These DAW-based techniques are sure to set you off in the right direction.

Toyboy & Robin! You returned to save the summer with your piano house smash hit, Think It Over. Did you have sunshine in mind when making this?

Thanks a lot! When writing Think It Over, we definitely felt like we needed to go back to the earlier sound of Toyboy & Robin. The huge vocal had ‘summer smash’ written all over it, so we needed to do it justice with the instrumental. Making summer tunes in the winter poses its motivational challenges but hopefully we’ve done the job. 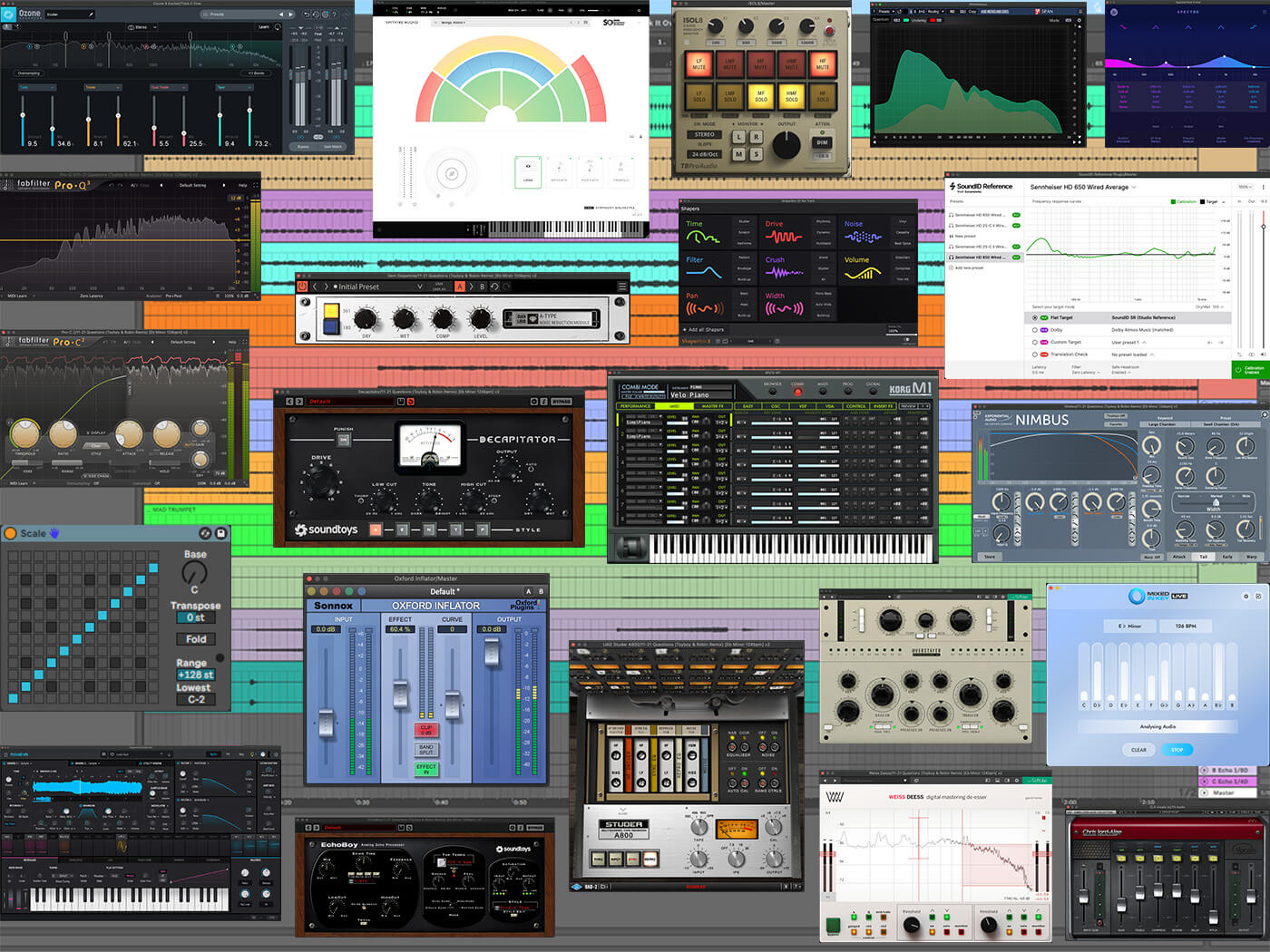 Where was the track made? And how did you collaborate with the singer on the vocals?

The whole track was a real collaborative effort between a couple of amazing writers and ourselves. Tim Powell and vocalist Clementine Douglas initially wrote the rough sketch together in Brighton. When we heard it, we instantly knew it had that Toyboy & Robin vibe, and it all flowed naturally.

The last plugin we bought was Cableguys’ ShaperBox 2. It truly is a versatile tool for all projects, given it has eight different engines and uses, ranging from rhythmic saturation to unique filter envelopes.

It has made basic but often fiddly-to-perfect elements like filtered kicks so much cleaner. When you high pass the low end for a traditional filter kick, you tend to get all that unwanted flabby tail of the kick poking through. Combining the Trim Hit preset on the volume engine, along with the high-pass filter engine, allows you to clean up all of the unwanted kick frequencies for intros, breakdowns and so on.

The interface is really good, as it takes your eyes away from the traditional EQ spectrum type plugins, and relies on you using your ears. We can’t speak highly enough of the plugin – it’s super stable, CPU light and it’s a must-have for any producer looking to tighten up their productions.

Actually two free plugins but both by the same developer, Spitfire Audio. Its BBC Symphony Orchestra is by far the most real-sounding free orchestral VST around, and its constantly updated LABS VST has a whole host of random and quirky sounds. The best bits from the BBCSO VST are the brass and string sections, in our opinion.

We recently bought Mixed in Key Live for $29. When we receive stems from each other, or for a remix, it always takes a few moments to work out tempo and key. With MIKL, if you simply play the track, it tells you tempo, key, and also what notes are used most prominently throughout the record. It’s handy for quick workflow, and for anyone who isn’t classically trained to just get creating.

Other than bundles by Soundtoys and iZotope, the most expensive plugin has to be Softube’s Overstayer MAS. We haven’t had it long enough to make a truly fair analysis on it, but it seems to sound good on just about anything. It’s a pretty clean saturator and gives you a lot of headroom back into your sounds, while making everything sound bigger and bolder. 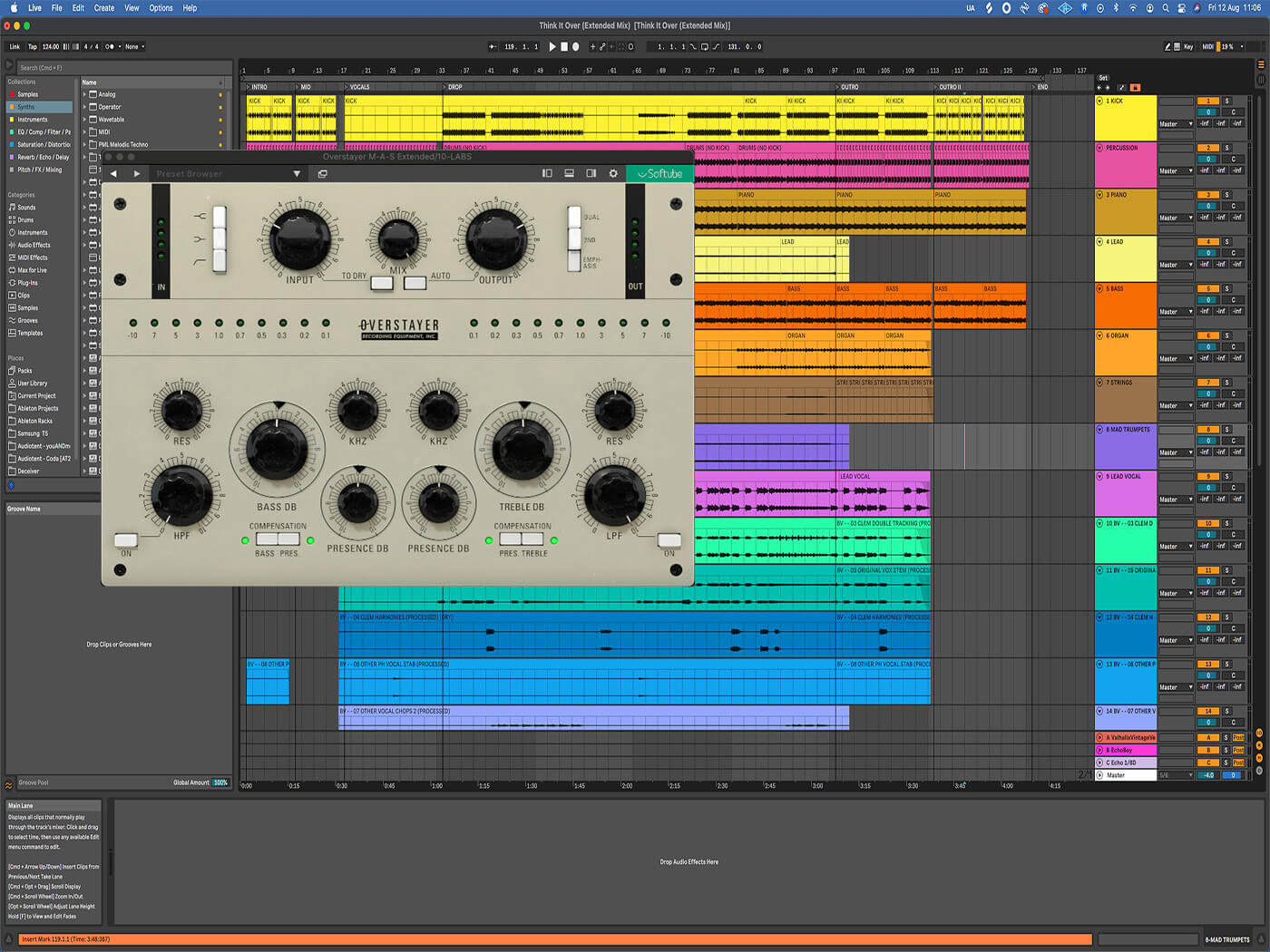 Without a doubt, it’s Ableton Live’s Scale plugin. Removing any notes that don’t work with the track makes the creative process so much nicer on your ears, keeps you on track and definitely helps inspire melodies knowing you can hit any key with the confidence it will work in your track.

What plugin would Think It Over be incomplete without?

The most used plugin across the project has to be Soundtoys’ Decapitator. It’s an obvious one, but it just works. Every element in the project needed to be quite upfront and Decapitator is just great at adding that extra ‘bite’ to so many different sound sources.

I’d feel guilty if I didn’t mention this too, but Overloud’s Gem Dopamine has been used a lot in Think It Over. It’s a one-knob wonder, retaining the integrity of the source material but giving a really transparent sheen to pretty much everything it touches, especially vocals. 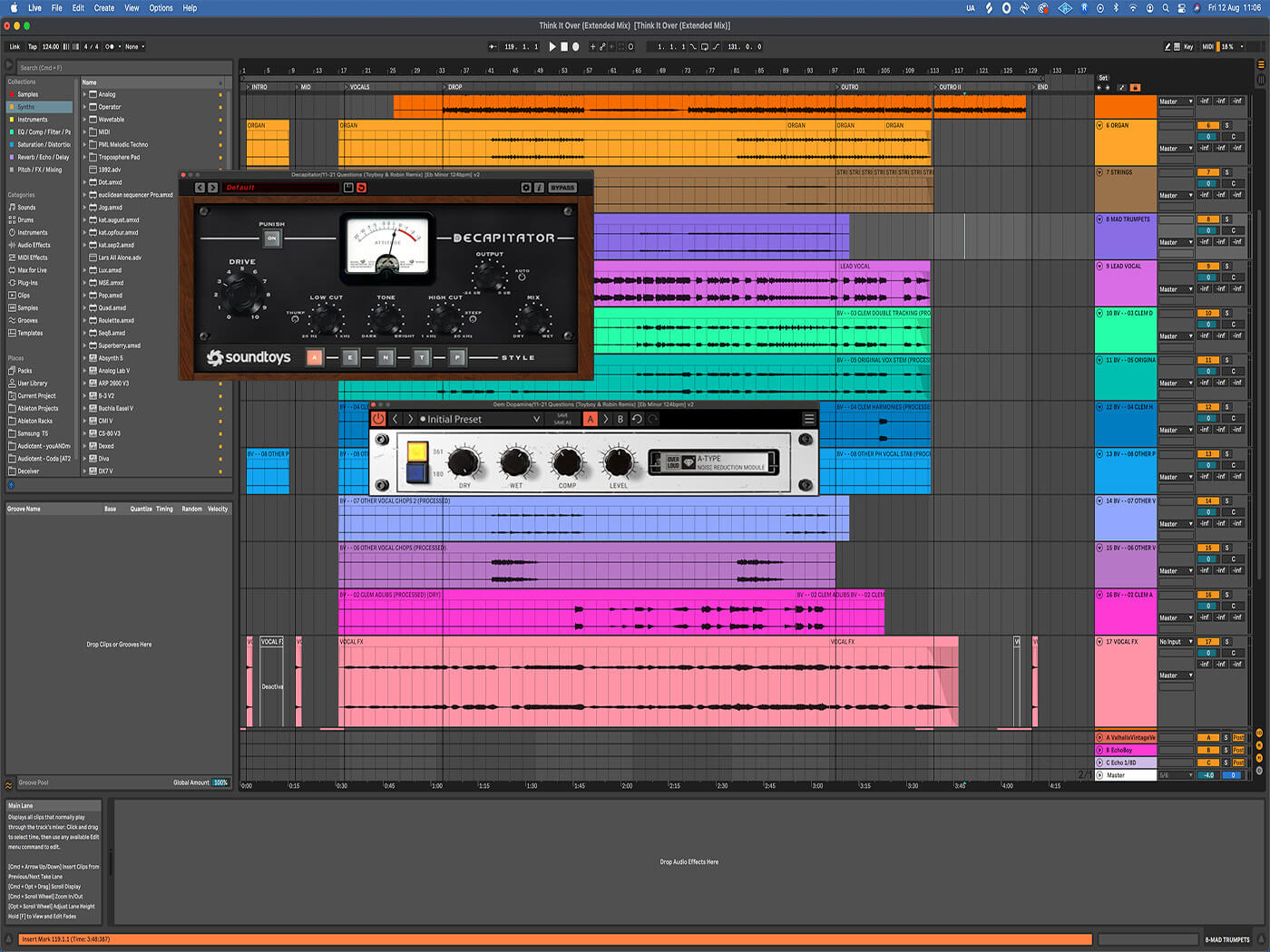 Let’s talk about those pianos. How did you source them?

If you want those classic super-bright dance pianos, there’s only one place to look: the Korg M1’s Velo Piano preset. We often blend our pianos with other real-life-sounding pianos. In this case, we used Native Instruments’ Berlin Concert Grand Piano from Kontakt. We EQ out the bottom end from the M1 and the high end from the Grand, giving us a rich low end and a bitey top end.

After some tonal EQ and compression, we ran them through iZotope’s Ozone Exciter. It can be a bit synthetic for certain material but for the pianos in Think It Over, it just worked perfectly. Because it’s multiband, it allowed us to push different frequency bands with different algorithms. Matching the peak-time energy of the vocal was key, so the flexibility to control different bands with varying amounts of distortion was super handy. 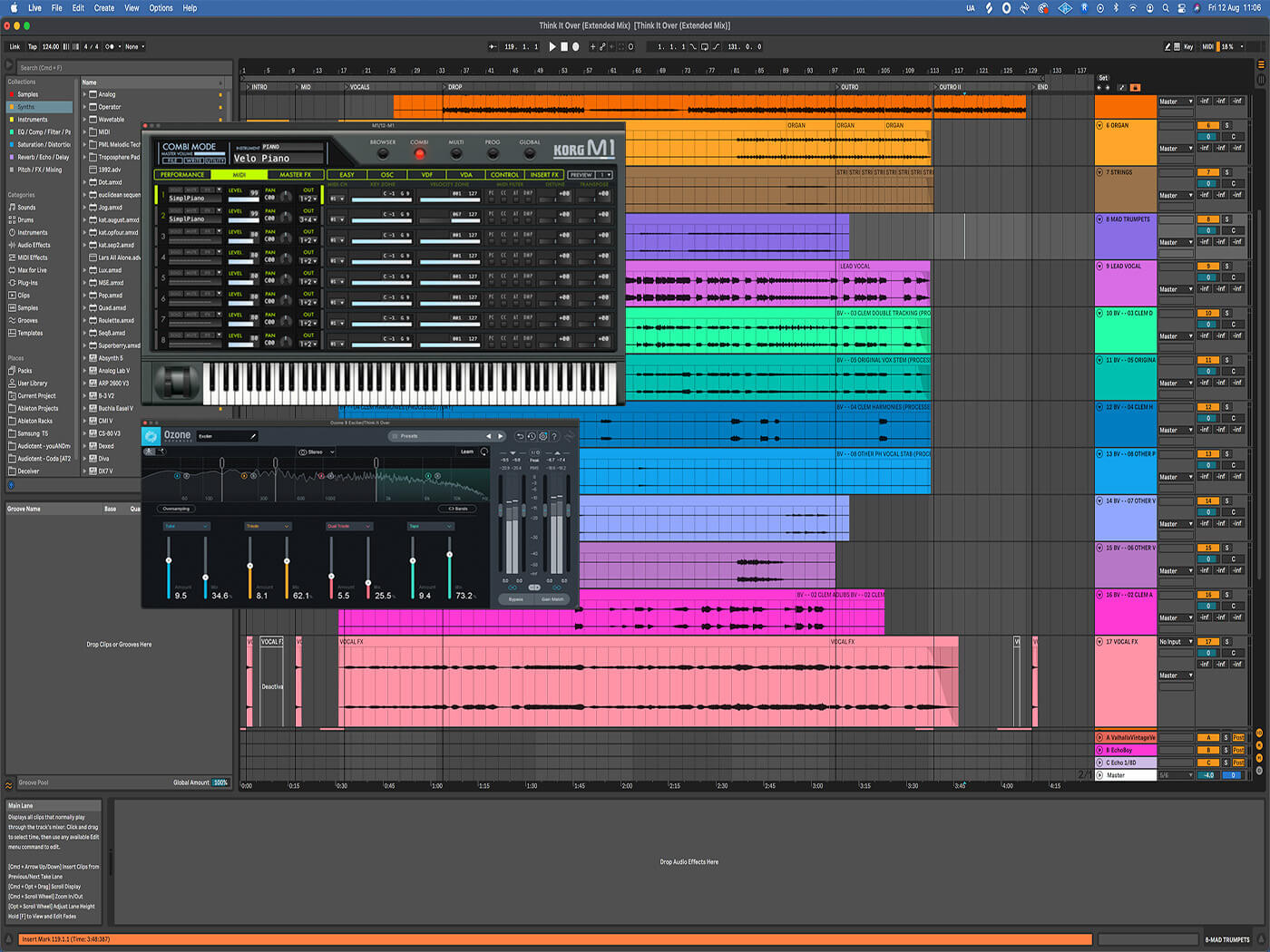 How do you process vocals?

It’s always best to go through the stems manually to adjust any big volume changes and remove any pops and clicks. Then, our standard chain involves some subtractive EQ with FabFilter’s Pro-Q 3, then a compressor – something like a FabFilter Pro-C 2 to level it out without too much colouration.

Once the vocal is tamed, we use saturation to thicken and bring out some tone to the vocal. UAD’s Studer A800 is excellent for that crisp tape sound for bright pop vocals. To tame the harshness from the saturation, we then use either Oeksound Soothe2 or Softube Weiss Deess where needed.

Finally, we catch any remaining peaks with something super transparent, such as FabFilter Pro-L 2 or Waves L2. Then dial in your reverb and delay sends to bring it to life. Lately, we’ve been using Exponential Audio’s Nimbus for reverb, and Soundtoys EchoBoy for delay/echo.

What techniques do you use to create tension in your tracks?

Automating the release time of our snare rolls along with a low pass filter opening up is a good way to create a sense of building tension. Adding the Noise engine from Cableguys’ ShaperBox 2 on our snares also allows us to really thicken them up by adding some hiss as they become more prominent towards the drop.

Another good trick is to create long reverse ‘up sweeps’ from our source material. Cut a little slice of a vocal onto a new channel, reverse it, add a huge reverb, bounce it, and then reverse it back.

Arturia’s Pigments and, if we’re honest we probably never will. While we’re sure it’s a sound designer’s dream, we’re happy to tweak presets and go from there.