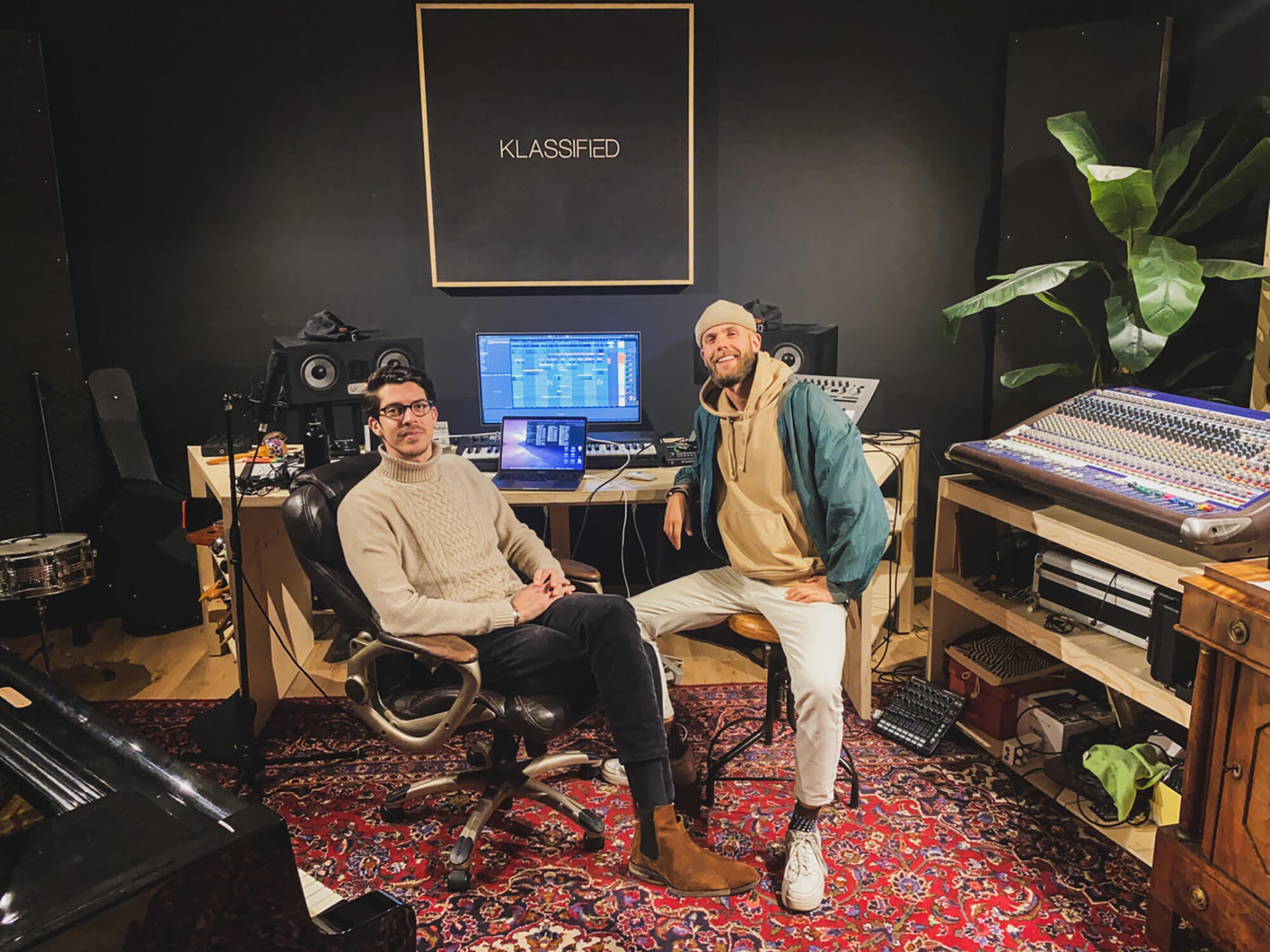 Plugins I Actually Use: Joep Mencke

Dutch producer and DJ Joep Mencke is a vibe maker and a storyteller. Honing in on a signature deep, melodic techno style, whether it’s through his sets at the likes of Burning Man and Ibiza or in his releases, his chugging hypnotic sound aims to take dancefloors to a place of pure hedonism.

His debut album, Unalome, explores each aspect of this melodic style. The artist dips into lazy grooves under bubbling synths, piano pads and intense chord progressions, while sometimes sidestepping into satisfying percussive grooves.

We find out about the plugins used by Joep Mencke with Thomas de Bie, one of the co-founders of Klassified Records, at the label’s HQ, where much of the album was finalised.

Tell us about your debut album, Unalome. What drew you to make a big body of work like this instead of singles?

Creating an album is an artist’s ultimate dream. Storytelling is deeply rooted in the music I make so this album was an opportunity for me to create an extensive musical journey and take storytelling to a whole other level. From beginning to end, each track builds on a foundation creating many layers and deepening the meaning of the journey the listener is being taken on.

You say “The Unalome symbolizes the path to enlightenment in Buddhism”. What’s the concept surrounding this?

The beauty of an album is that you are creating within a context, conveying a message, telling a story. Unalome is the story of human existence. It reflects the different emotional states within life and ultimately embodies how we evolve and grow as humans. Each track is therefore a particular state within this journey. It begins with courage – the courage to start this path of growth and ends with enlightenment – the ultimate intimacy with all things in life. 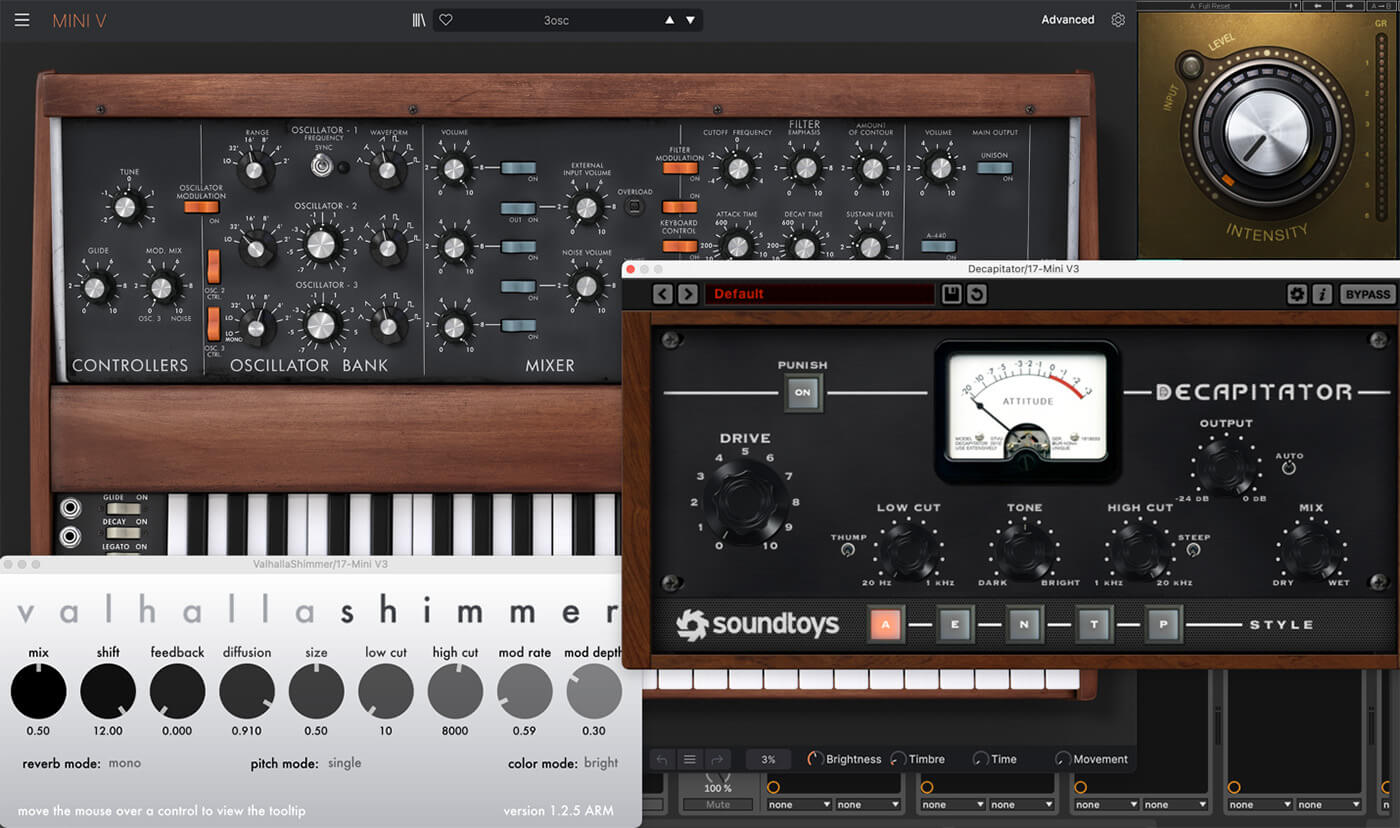 Where do you make your music and why? Do you often make music on the road while gigging and does that inspire your productions? How?

Being surrounded by new environments is what sparks my creativity. So, most new musical ideas (and also the best ones) come up while I’m travelling. I love to travel and having the freedom to set up a base anywhere that inspires me. So my setup is fully in the box and I don’t need anything else other than my computer, hard drive, and headphones to create. ‘Less is more’, they say! Ultimately, it’s all about that balance between movement that inspires to create and the anchor of a studio to produce and finish.

Do you use much hardware while producing or is it mostly plugin-based?

As I have been travelling a lot, I almost entirely work in the box. I have some hardware in my studio, but I rarely use it. I actually recently sold my Prophet Rev2 because it was just catching dust. I like the idea of having a studio filled with synths, but right now it doesn’t work for me. Also, I just love the workflow of having everything inside my computer

My latest purchase is the Waves CLA-3A compressor. As I really like the simplicity and sound of the CLA-2A, I was curious to try out the CLA-3A, which, due to its faster attack time, is more suited in dealing with fast transients like drum sounds. 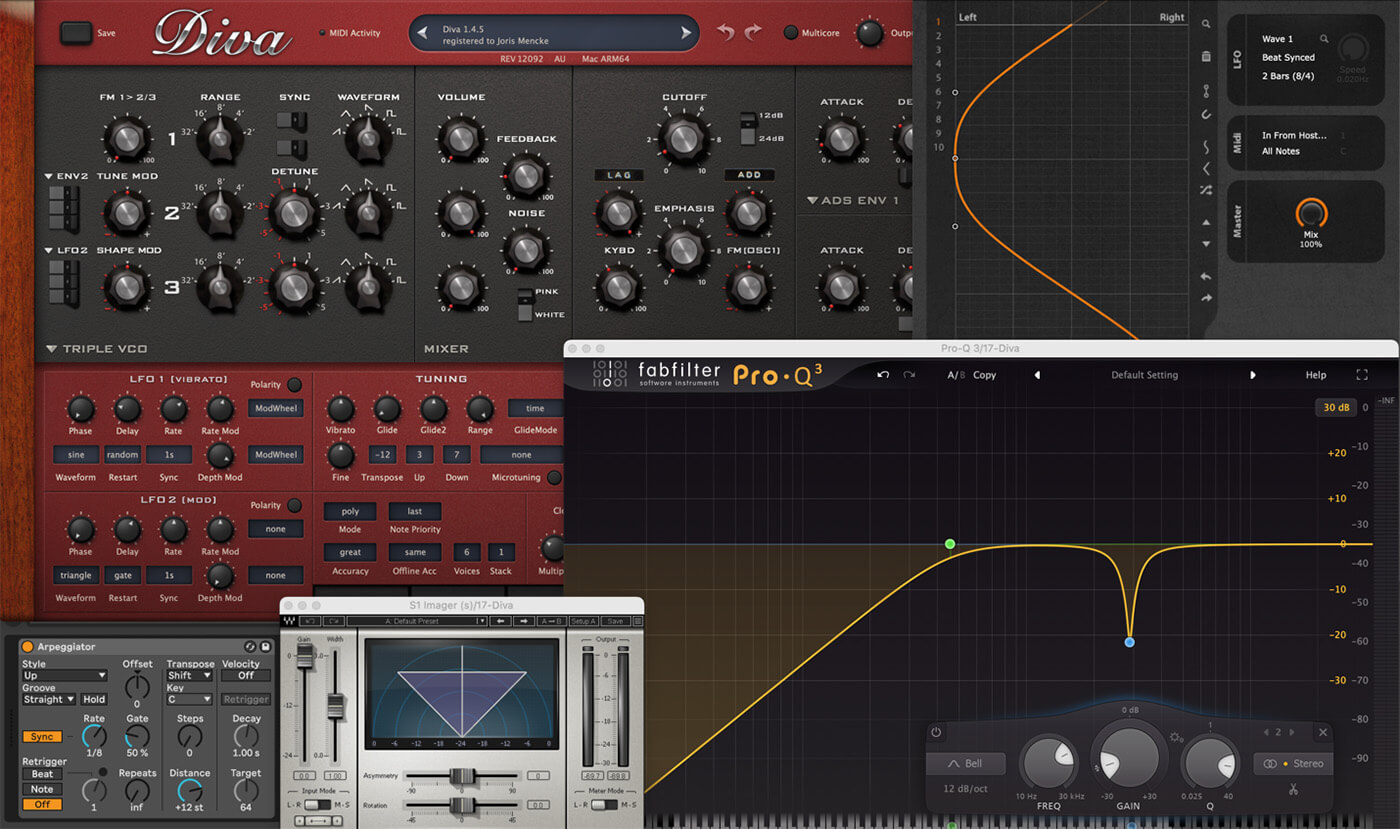 Cableguys PanCake 2. This plugin is super simple and does exactly what a panning plugin should do, in my opinion. I use it in all my tracks. To create movement in hats or plucks, or to create randomization in fx sounds.

Waves H-Delay. It’s generally available for €29,00 in one of the endless sales Waves offers. This is my favourite delay plugin. it’s simple, versatile, and sounds amazing. One of the functions I particularly love is how you set a delay timing in sync mode and then switch it to MS mode so it gives you the synced delay timing in milliseconds, which enables you to slightly adjust the delay timing with a few milliseconds to create more organic and interesting delays sounds.

Probably the most expensive single plugin purchase was Cycles by Slate and Ash when it had just come out. Cycles offers loop manipulation and granular synthesis. At first, I was super impressed by what the plugin can do, but it somehow just never resulted in an idea that I could use for one of my tracks. Also, it doesn’t really fit the sound I have been into in the last few years. I never use it. 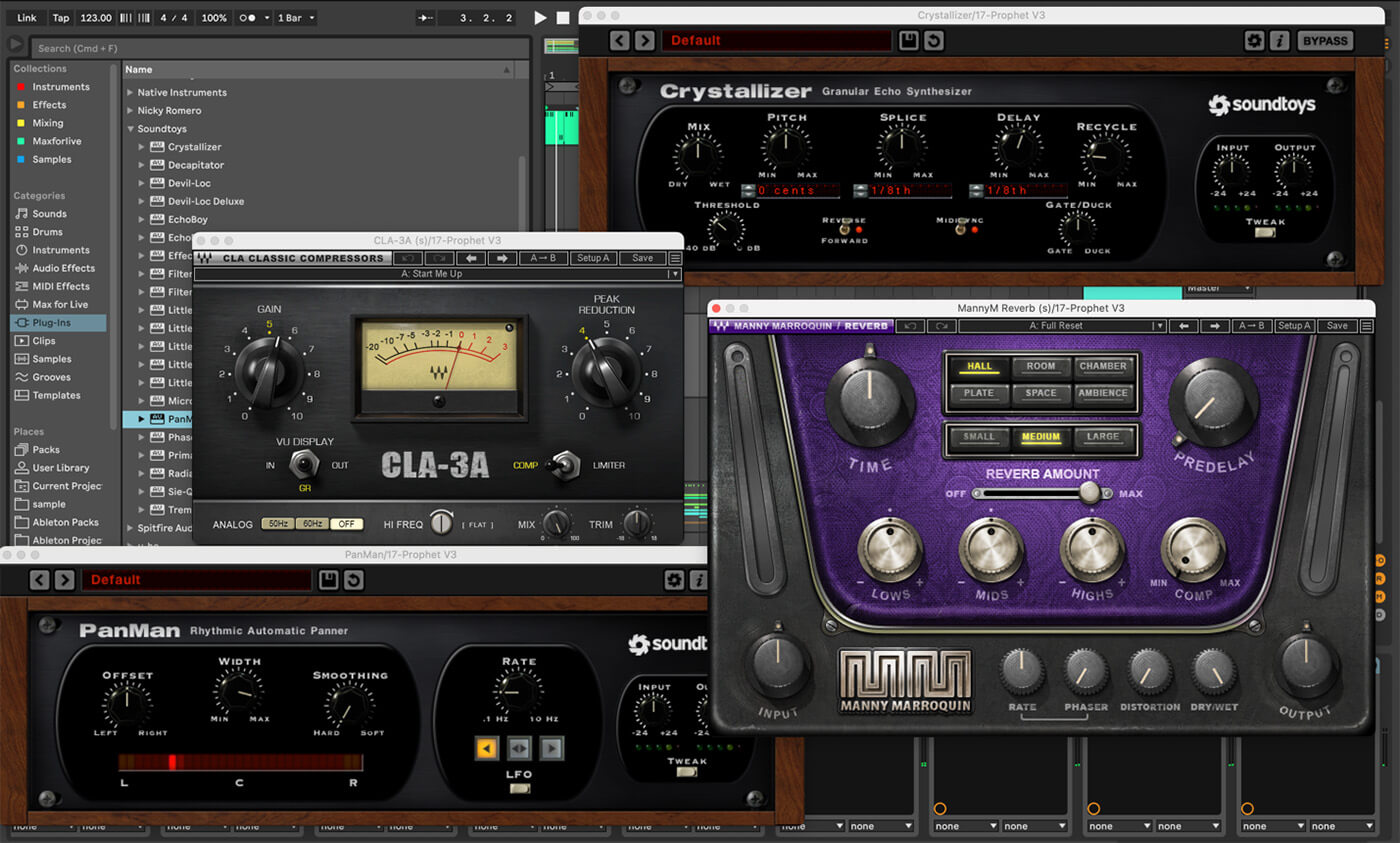 Ableton Live’s Erosion. I really like how this effect adds a playful layer of noise to your sound. I use it a lot on pad sounds to create extra texture, but I also use it on shakers to create a bit more body. It works well for adding a bit of grit to any sound.

What plugins go on your master bus without fail? (is that during the mix, or afterwards?)

Fabfilter Pro-Q 3. It’s the best EQ plugin on the market, in my opinion. I use this to make some final adjustments after the mixdown. The EQ-match function is especially useful as it helps to match a reference track.

What plugin would Unalome be incomplete without?

u-he Diva. This is definitely my favourite synth and I used it in every track of the album. The versatility is incredible, the presets are inspirational and the interface is intuitive. But most of all, it just sounds ridiculously good. Whether it’s sharp arps, round stabs, or lush pads, Diva always delivers.

Tell us about the synths used throughout the album. What is your process for making a melody?

The most defining synth I used in my album is a custom preset I created with Serum (see screenshot). It’s a pad sound that creates a very distinct melancholic atmosphere and I fell completely in love with the sound. On top of Serum, I used Valhalla Shimmer for that pitch-bending reverb that is creating that melancholic vibe, Soundtoys Crystallizer for some weird reverse delays, Soundtoys Decapitator for some extra drive and saturation, PanCake 2 for movement, Fabfilter Pro-Q 3 to take out the low-end, and, last but not least, Ableton’s own Erosion to add on a bit of white noise.

My process of making a melody is simple: I sit down behind my piano and it just comes – or not. In case it doesn’t come naturally, I would use Ableton’s arpeggio on random mode with several octaves and record the notes for a while. This always gives me some ideas that are useful or inspiring. 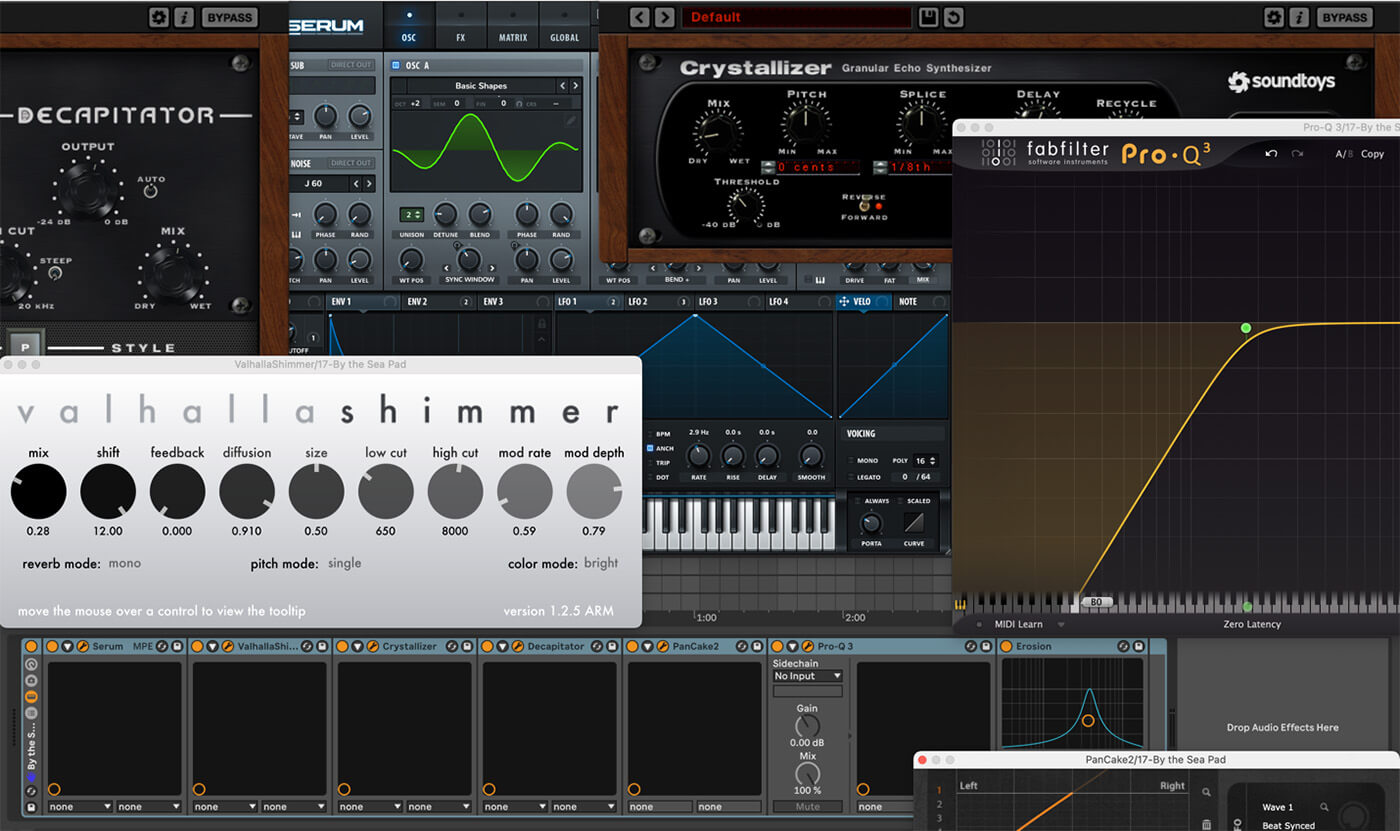 The Valhalla Shimmer reverb. I absolutely love how it turns every plain simple sound into a lush pad. The pitch-bending effect, the long tail, and the stereo effect create a distinctly melancholic sound that I love.

Soundtoys Decapitator (distortion/saturation). I’m a big fan of Soundtoys in general, but Decapitator is probably my most used Soundtoys plugin, and I throw it on everything. The interface is super simple and aesthetically pleasing. Any sound that needs a bit more edge will benefit from this.

MixCentric by Waves. I’m not sure what it does exactly, but it involves a bit of EQ, saturation and compression. it’s a one-knob wonder and it makes sounds pop out in the mix and create more clarity. I use it a lot on plucks and arps, but also on drum buses.