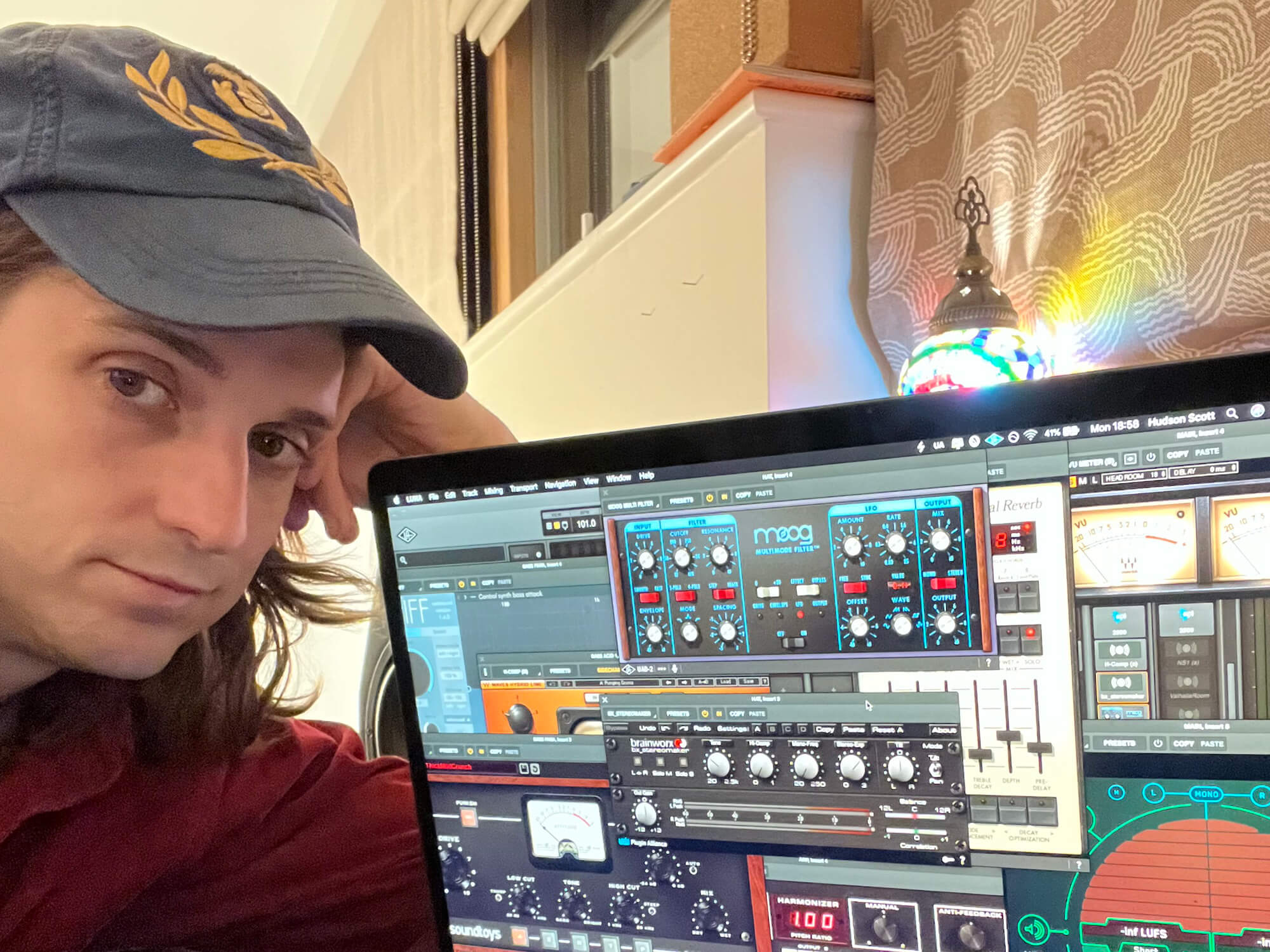 Plugins I Actually Use: DC Gore

A virtual Minimoog that’s “better than the original”, a plugin addiction that’s keeping him awake at night, and a keen eye for a VST-based bargain.

Political lyrics flare up and are surrounded by dance-heavy synthesis on DC Gore’s debut album, All These Things. A playful singer with a tinge of Jarvis Cocker spread onto a slab of intense electronic instrumentation, he knows what it takes to put together a hit that blends pop and dance into one.

DC Gore loves a good plugin, even if his music does sound like it been made using high-end hardware only. We find out about some of the plugin steals he’s nabbed, channelling Blade Runner, which plugin addiction “keeps him awake at night” and we hear why Arturia’s Minimoog emulation is better than the hardware original.

DC Gore. You’ve recently released your debut album – a real milestone for you, I’m sure. What is the concept behind All These Things, if there is one?

Well, if Harry Dean Stanton had washed up somewhere other than Paris, Texas what would he have made of it all? I mean imagine the same character turning up in Rhyl or Dungeness. That same big sky but instead of the American landscape, it’s a roundabout in Wallington, what would that have been like? Patrick Keiller vibes but with brutalist architecture.

Sound ID. I just did the trial and it was a game changer so I’m going to buy it on Black Friday. Everything in my world is really bass-heavy and I don’t have very good treatment in my room, plus I love listening to everything in my Sennheiser Momentum headphones which are not very accurate. Sound ID corrects my crappy headphones and means I can enjoy it as if I was just listening to music on the go.

I got a bunch of plugins bundled in from Plugin Alliance when I bought something else and the Stereo Maker plugin is really useful. Also, I’m mainly buying metering plugins at the moment (as I have a strange prejudice against Ozone) and the YouLean metering plugin is free. 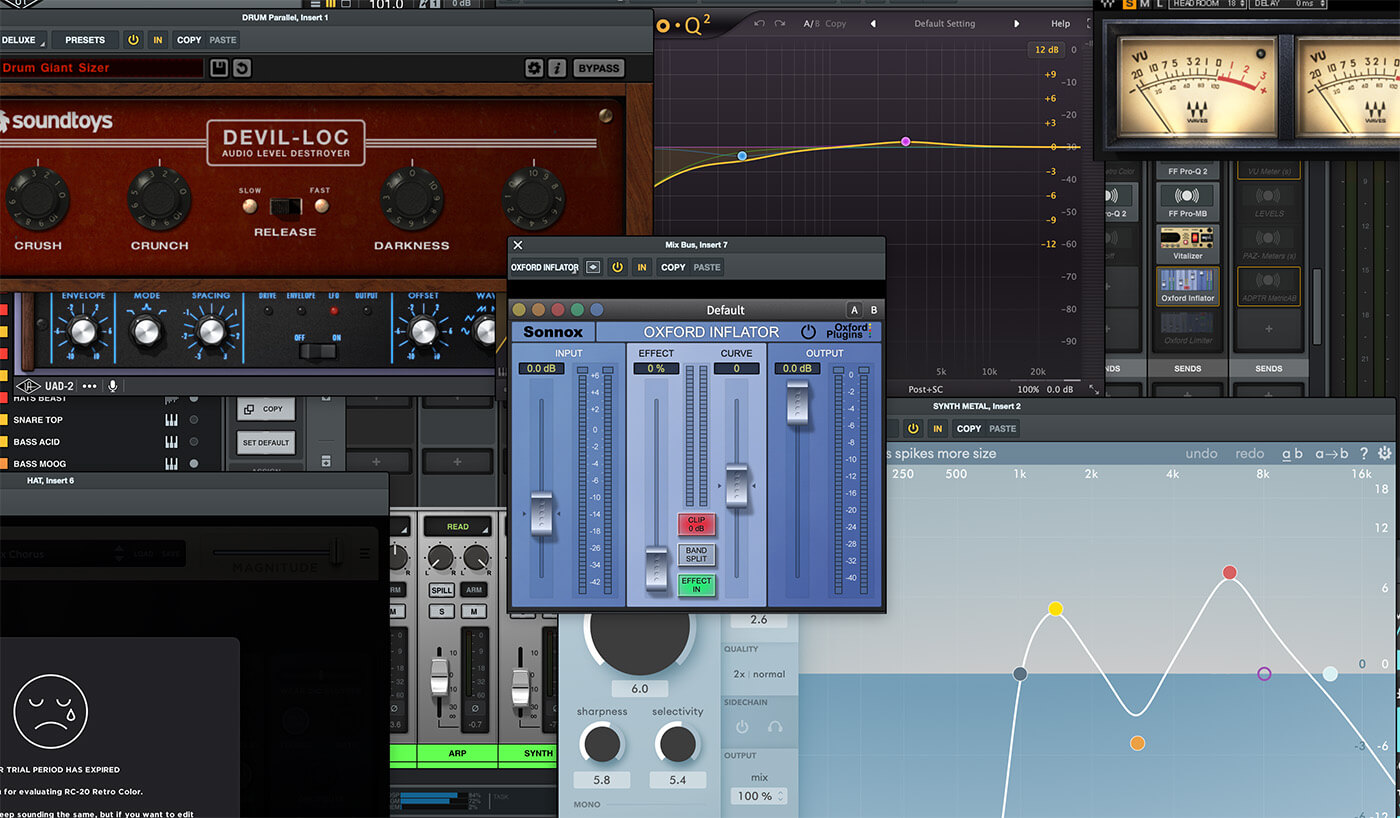 I’m always looking for plugin sales so all my plugins are good value but I got Soundtoys Decapitator for £20 and it literally goes on everything. I resisted it for ages because everyone uses it, but it just is such an amazing plugin and even though I prefer, or at least try to prefer other saturators, the flexibility, sound, ease of use and low DSP make it my go-to.

Sometimes thinking about how much money I’ve spent on UAD plugins keeps me awake at night. Now that I work in Luna for mixing, they’re all there all the time… whispering to me. Every time there’s a sale I get a couple more. I had a really bad splurge one year where I had to keep returning them and re-buying because I kept adding more and worrying I wasn’t gonna have enough for rent that month. Now it’s all on credit so I’ll probably be paying them back till the day I die.

Pretty sure everyone who uses Ableton Live uses the stock plugins. If you like the environment, they’re super easy to use, sound great and are low on DSP – so perfect for working on a new idea, particularly if, like me, your sessions are a little on the messier side. 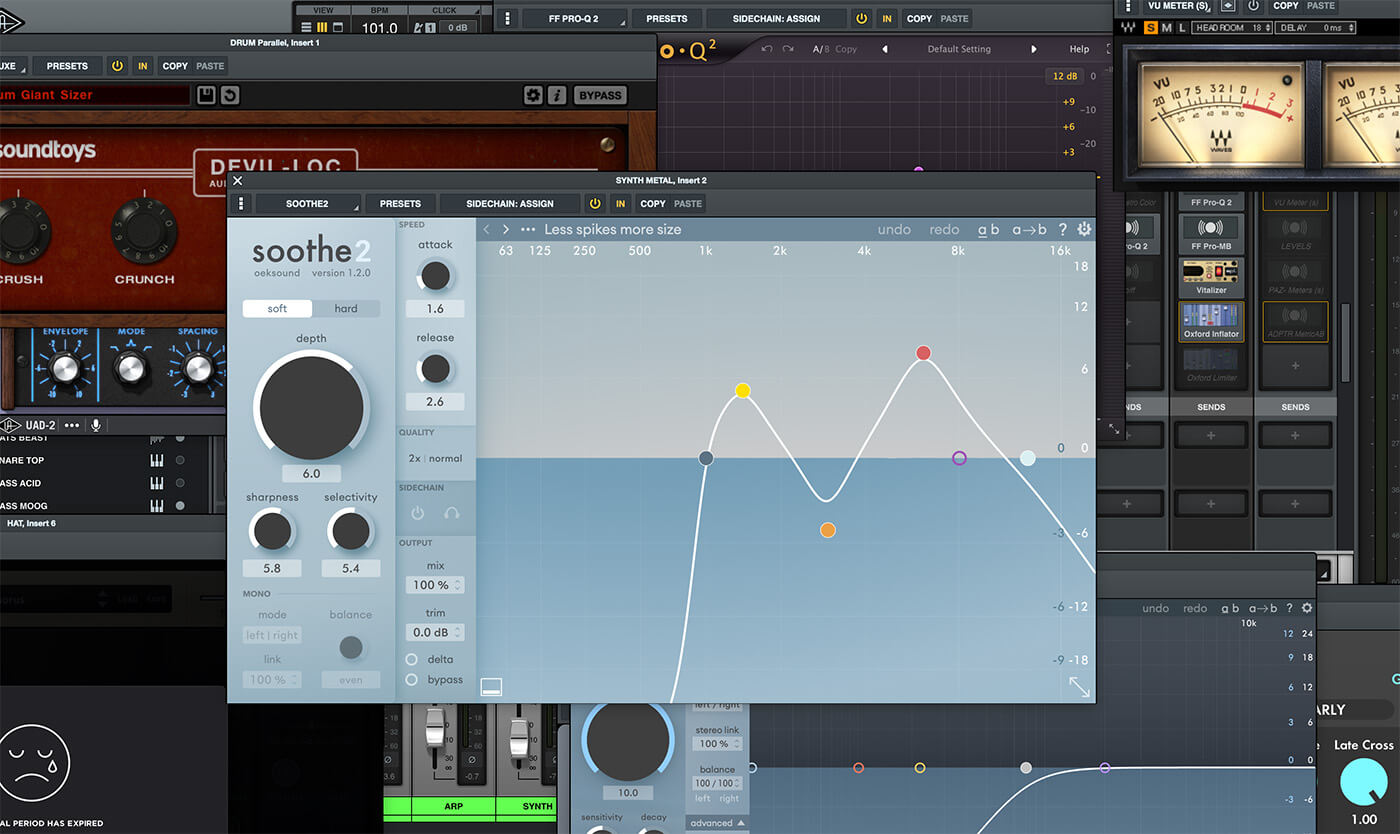 I try and keep mixing and production separate where possible. I tend to start working on my MPC live or in Ableton and will gradually shift to Luna once I’m ready to start mixing. I use the master bus to add colour to my mix and as I work predominantly in the box now.

It’s pretty much always a UAD Pultec, SPL Vitaliser (after Dave Fridmann) Oxford Inflator/Limiter and at least some sort of tape saturation plugin. I like the Universal Audio ones of course but also Satin and PSP are great.

What plugin would your album be incomplete without?

Arturia Minimoog. When my previous band Little Cub first got together, we were staying with Duncan in the US and we decided to buy the Arturia V collection. We had to go and collect it from this guy on eBay and I just remember it came with all the manuals (like paper manuals for each synth). The Minimoog was so straightforward it soon became the go-to synth plugin and that’s remained to this day. There’s stuff on the demos that was re-recorded on more expensive hardware synths, but listening back to the demos, sometimes I think I prefer the plugin. 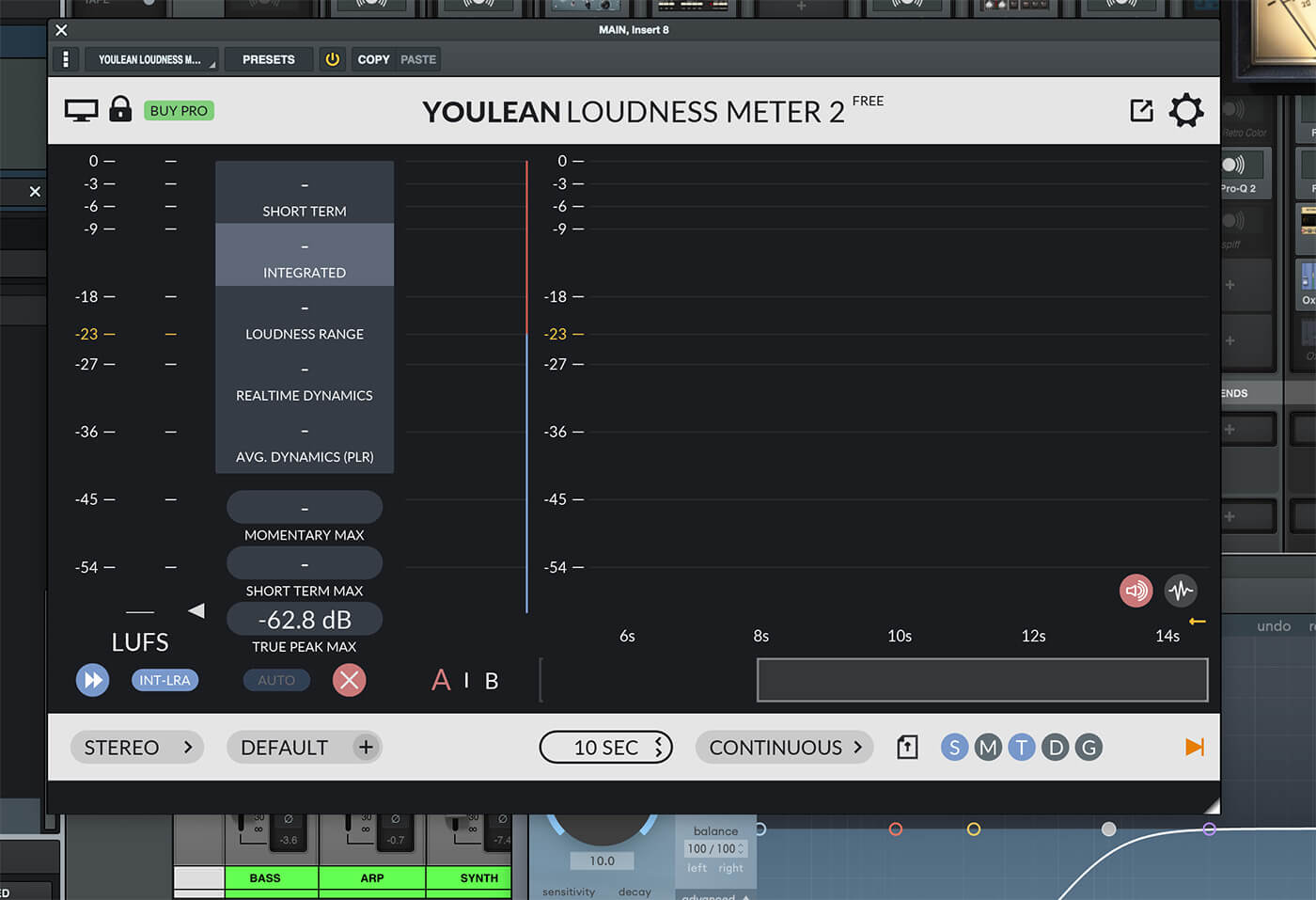 How did you process your vocals on this album?

When I started recording the vocals for the album I was lucky enough to use an old 67 into a v76 preamp into an LA-2A. Unfortunately, because it took so long and we were only borrowing, I had to change to using the 67 into an Apollo and then eventually a Wunder Audio CM7 into the Apollo.

My voice is extremely sibilant so there are always a few instances of de-essing. In the end, Lex (Alexis Smith of Speedy Wunderground) who mixed the record with me, had to go through each vocal stem and turn down the lead vox at sibilant points as nothing else worked. I try and use Soothe and a trick I got from Peter Katis about multi-band de-essing now, but it’s mainly just removing noise from my voice. 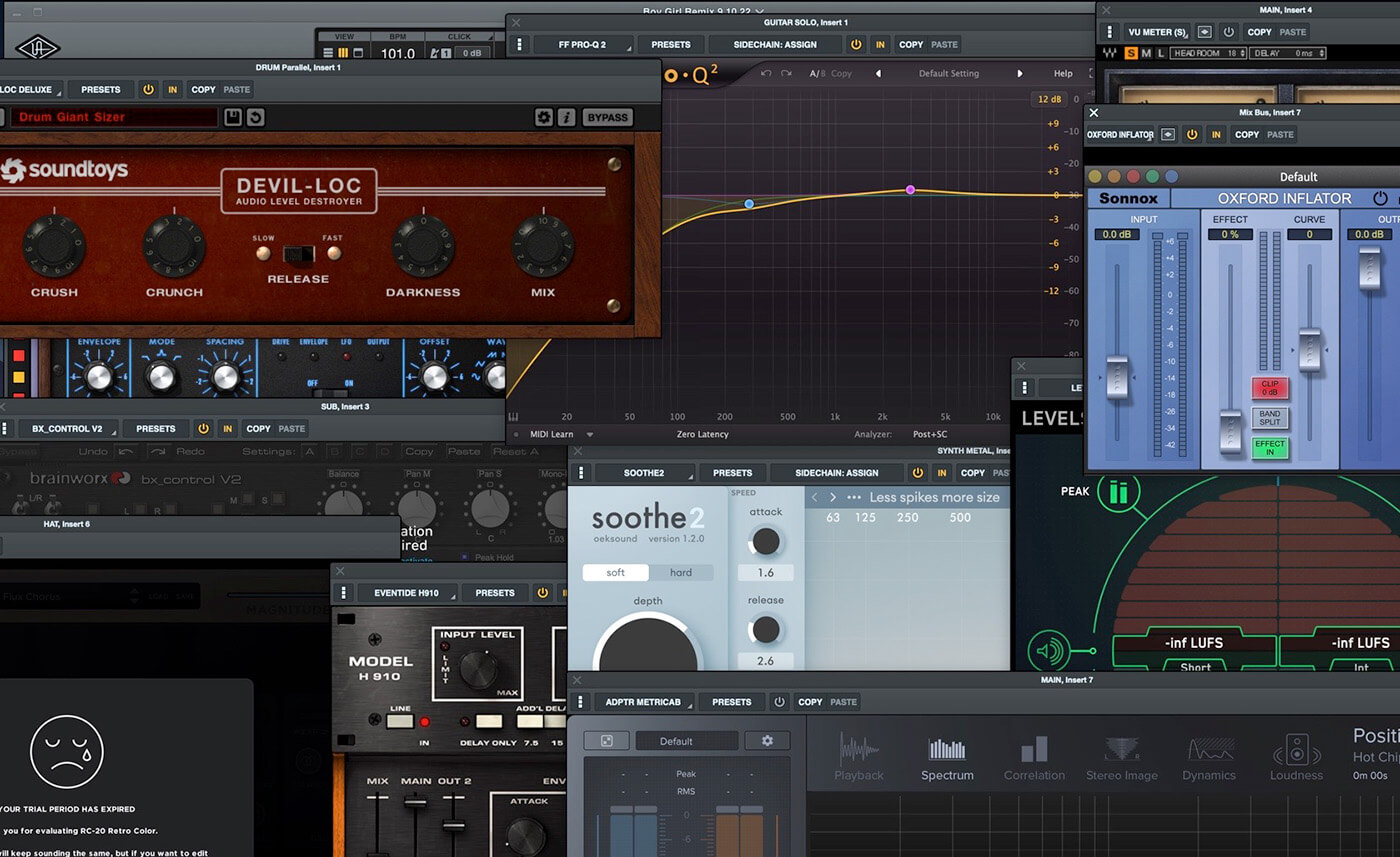 What do you use to create such a retro feel on many of your tracks?

Ha! Well, I suppose I don’t really see it as retro but I’m definitely interested in music from the 80s. I don’t have any great desire to own the hardware but if I’m in a good studio I will always try and run through whatever’s there. Plus, I love trying to get those sounds with plugins.

Duncan and I went to see Blade Runner 2049 in the cinema and we were both instantly like ‘we need that sound’. He got a Deckard’s Dream and spent a long time learning it. I mainly just mess around with the CS-80 plugin from Arturia and try and get the fatness from additional plugin processing, but we both fell in love with that sound.

In a less intentional way – when Tom Gillieron (who did additional production and pre-mixing on the album) and I were prepping the stems for mixing, we realised that there was a funny low hum on all the tracks. We spent ages trying to remove it only to find it was coming from the Waves plugins we used. They all have that analogue sound that you have to take off. It was so annoying as we had to reprint everything but it was a valuable lesson to learn. 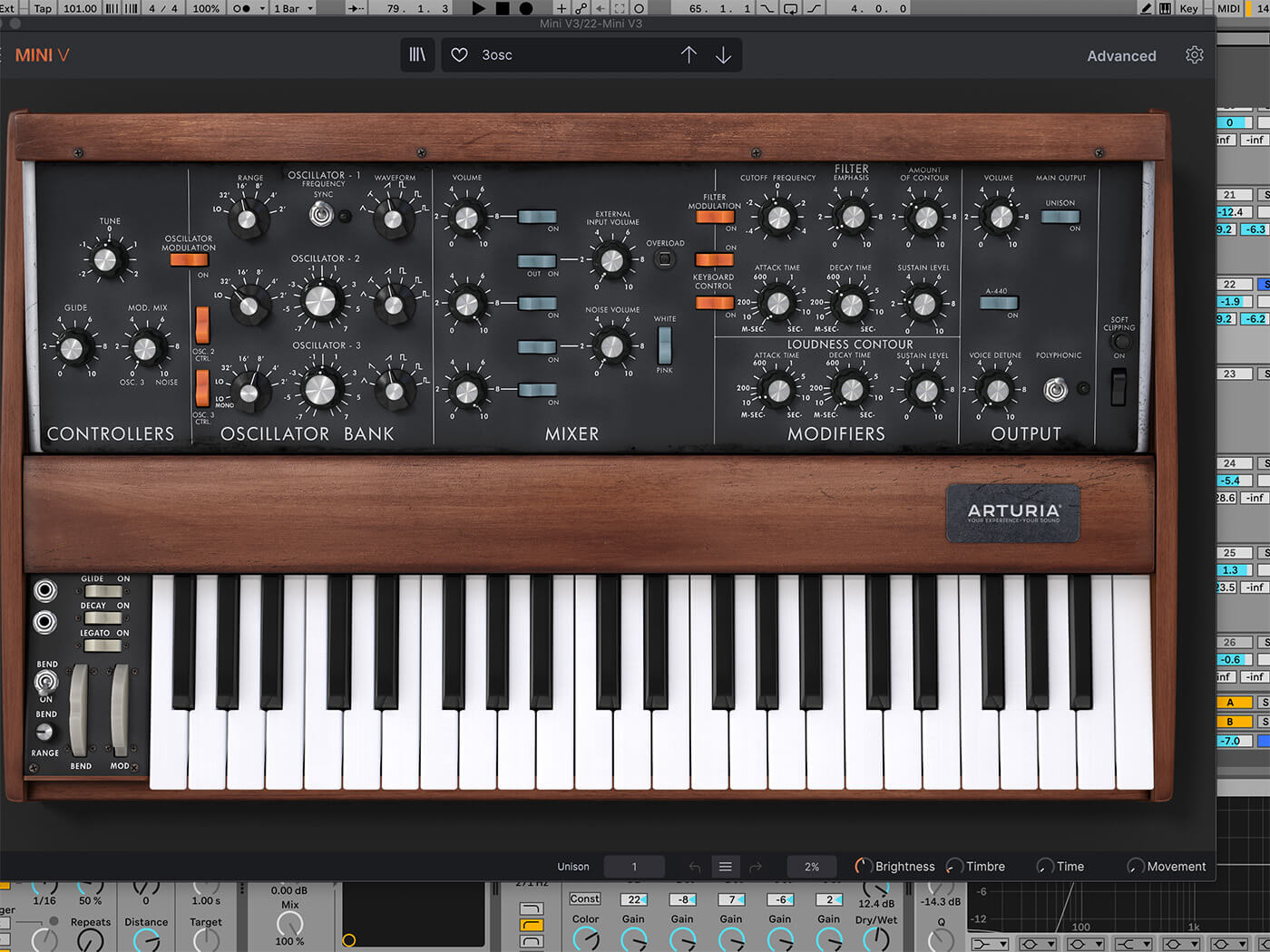 UAD’s Studer tape plugin. I use it on every channel in Luna and I love the sound. It can be very subtle but glues everything together.

H compressor from Waves is my go-to compressor with the analogue noise switched off, of course!

I’ve started using the Infected Mushroom plugin from Waves. It makes everything sound glossy and big. It literally has a button on it called “Magic”.

Oxford Inflator. I don’t really understand what it does and in fact, I’ve watched a lot of interviews with famous engineers who don’t seem to know what it does either, but it sounds good.

Listen to All These Things, the debut album by DC Gore at spotify.com.