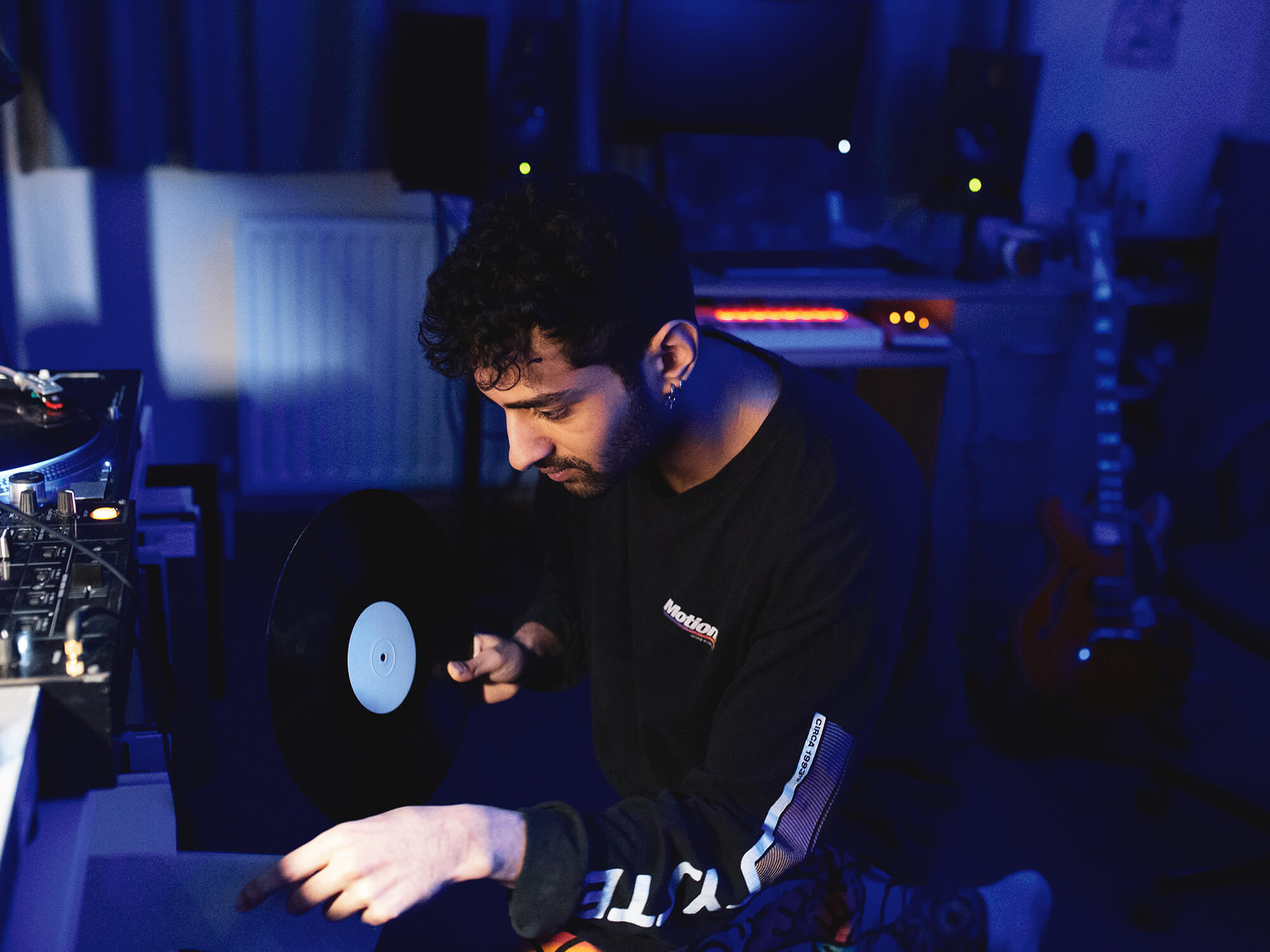 Plug-ins I Actually Use: Michael Diamond

Jazzy at times, dubby and techy at others, Michael Diamond offers a fresh view on dance music.

Michael Diamond is a fascinating new face in dance music, drawing from and combining a broad spectrum of inspirations from ambient jazz to techno, having released on label Lobster Theremin with his track Le Velours Noir in 2021. His unique style arrives in the form of metallic, dubby grooves, deeper, broken left-field house jitters or emotive pad-laden moments – made for dark club corners or, equally, the main stage.

We catch up with the producer to hear about the plug-ins that went into the making of his long-listen continuous debut album, Third Culture. We also learn how his pairing with long-time collaborator and saxophonist Alex Wilson this time opened and closed the release, adding to its definition.

Michael, congratulations on the release of your spellbinding debut LP, Third Culture. Why an album, why now?

Thanks so much! A long play was a new challenge for me. Making something that’s intended to be listened to from start to finish has been creatively fulfilling. For me, the glue that elevates this is Aine’s accompanying short story and Oscar’s accompanying video. They’re loosely based on our own experiences growing up and I’ve learnt a lot about myself as a result.

It seems like you have a pretty minimal setup. How has software enabled you to actualise your ideas?

Software has made music production more accessible. I would never have been able to get into it back in the analogue days because of all the start-up costs. Software can do pretty much everything hardware can (and often a lot more) so I don’t tend to buy a lot of physical gear.

You teamed up with co-writer and saxophonist Alex Wilson on the album, for tracks Genesis and Liberation. How do you generally approach collaboration?

Alex is friendly, highly musically intelligent and extremely reliable – it’s always so good to create with him.

I make the initial idea of the track and then lay down a few melodies/motifs that I’d like Alex to play. I send him the blank track and he does several takes – a few takes of the melody/motif I wrote, a few takes of his own variations of the same melody and then a few takes of improvisation/soloing. I get all of these recordings, dice and splice them up in an order that I see fit. Then it’s a matter of using effects plug-ins, delays, granulisers, reverbs, automation and more to try and get it to sound how I want. 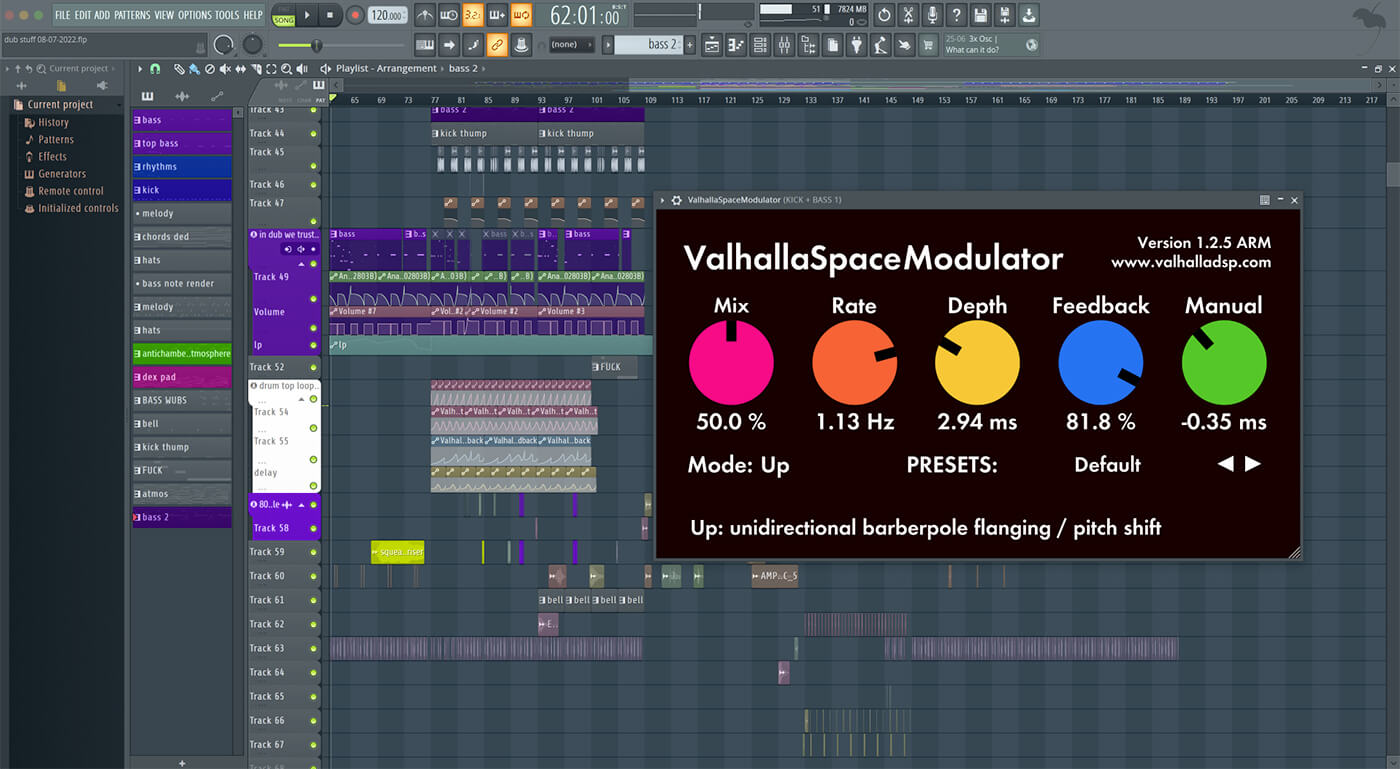 It’s not a purchase because it’s free but I’ve recently been having fun playing around with Valhalla Space Modulator – I was slow on finding out about this so it didn’t actually get much use on the album. It makes really cool flange, gritty and warped effects that sound especially nice on drums.

There are a few to be fair, so I’ll pick one at random to talk about – Valhalla Supermassive. It’s quite a favourite in the producer world, capable of making some luscious outer space ambiences. It’s exactly the kind of vibe I enjoy so I tend to use it quite a lot. It’s heavily-used throughout the album. 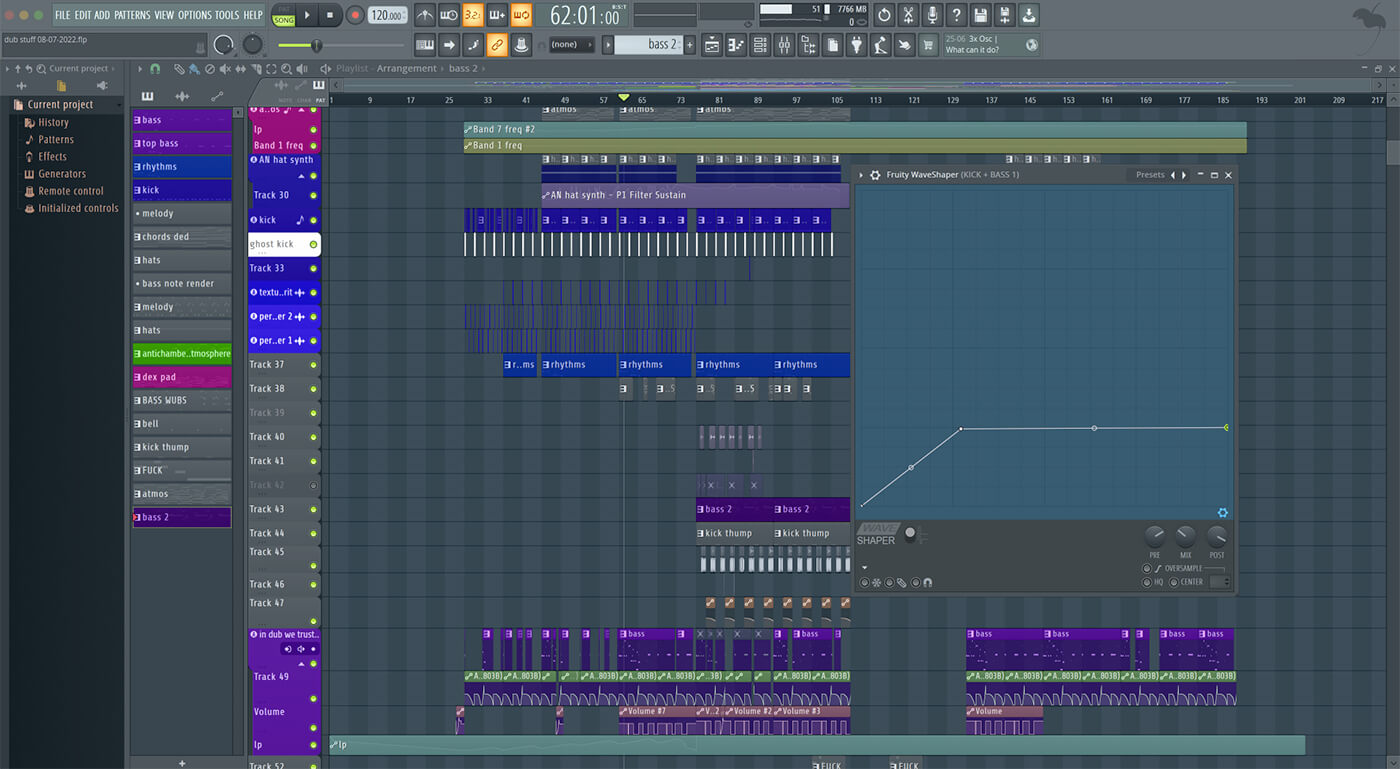 It’s going to have to be a free one. Out of the many I use, I’ll choose TDR Kotelnikov. It’s a simple compressor which I feel sounds nicer than the stock one in FL Studio. It’s my go-to compressor.

The Arturia V collection – it’s a big collection of classic synth emulations. And, yes, it is absolutely worth it. I pretty much don’t need any more synths now that I have it. Also if you time it right you can get some money off when Arturia run discounts every now and then. 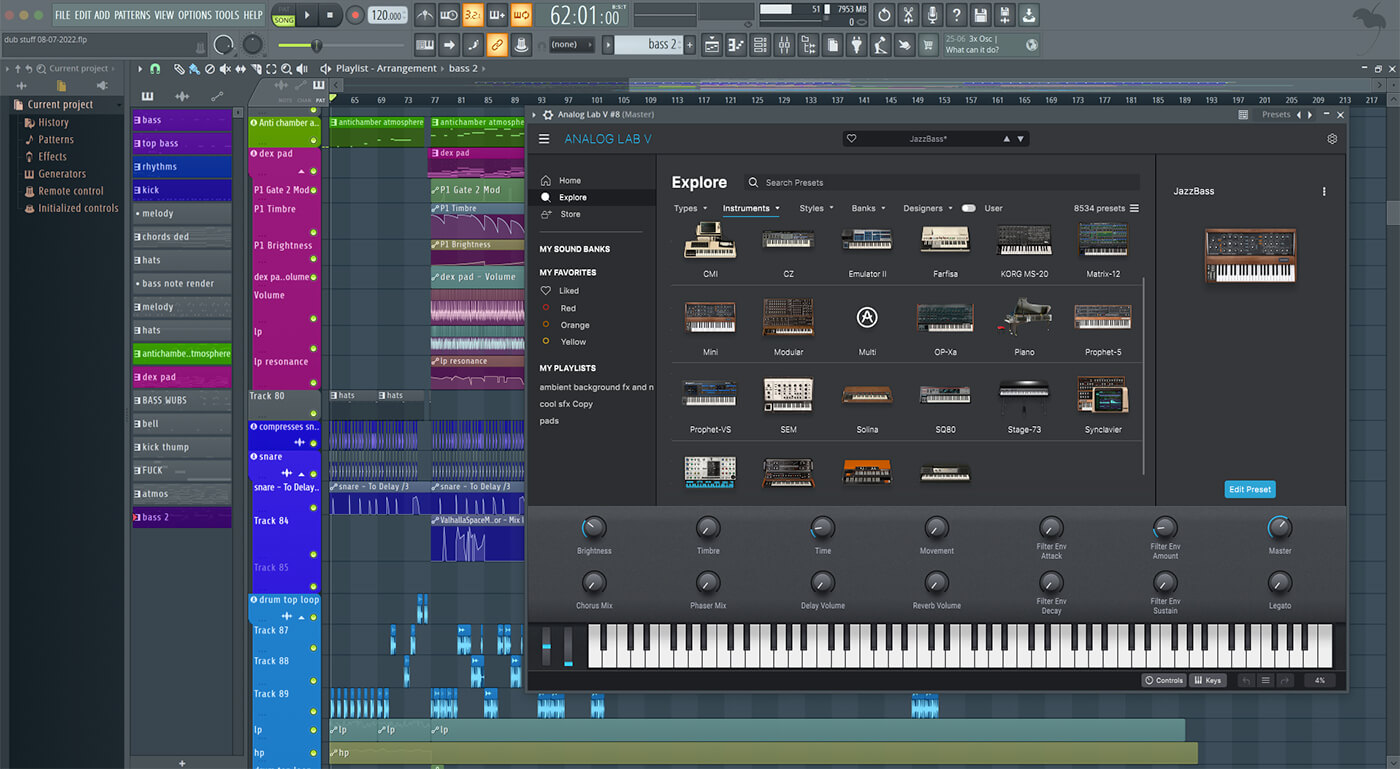 Waveshaper CM. It’s a saturation, distortion and harmonics plug-in that allows you to draw in the exact saturation curve you want. I tend to shape it as a hard clip like below for drums – it can make them sound tighter.

When I export the final mixdown I tend not to have anything on the master unless it’s some sort of creative effect. The plug-ins I use on the master bus during the mixdown stage are mostly for monitoring purposes – these are the four I have loaded by default.

The first is the spectrum analyser SPAN – useful for finding specific bass frequencies when tuning drums.

The second is a disabled band-passed EQ (just the stock fruity parametric EQ2). I enable it whenever I want to listen to a specific frequency range in isolation – it sometimes makes it easier to hear what I’m looking for.

Thirdly I’ll have a limiter (the stock one on FL) – just to help get the level up when I want to export.

Last is an RMS meter (Wavecandy) to check loudness.

Are there any plug-ins that the Third Culture LP wouldn’t be complete without?

Not technically a single plug-in, but the Arturia V synth collection is where I got a lot of the synths used in the album. Because there’s so much in a single user interface, Analog Lab, you can find nice sounds really quickly and then tweak them to taste from there.

How did you create the percussive bell-like sounds in Exodus?

They’re actually incredibly simple. It’s just a FLEX patch in which I adjusted the volume and filter envelopes on to get it to sound like more of a shorter blippy bell-like sound. Then it was a matter of adding delay sends, reverb sends, with automation on the envelope, effects sends, delay time, feedback, modulation, and so on. 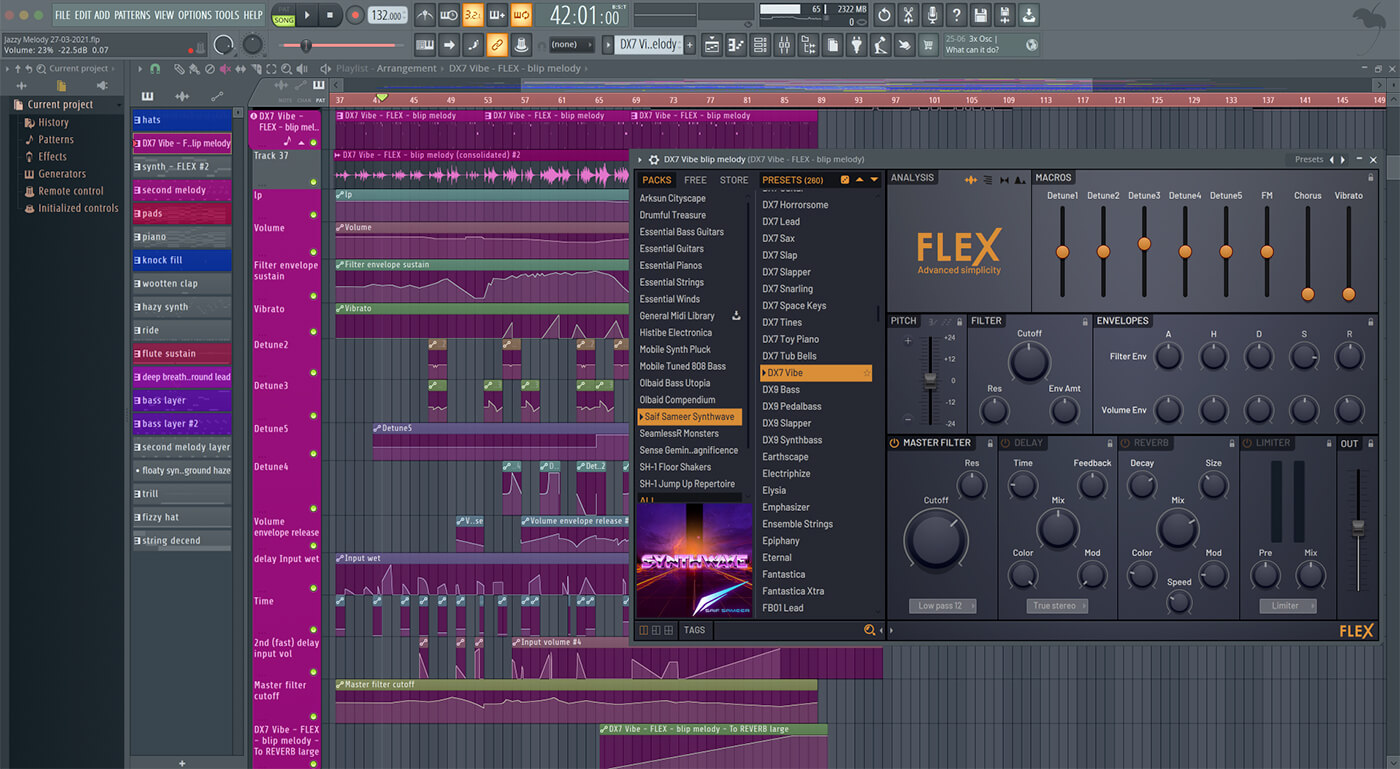 I have quite a boring answer to this so I apologise in advance! When I was just starting out and struggling with mixdowns, Christoph from Salin Records gave me some good advice in that I should try and use as few plug-ins as possible. So now, the only plug-in that I use on every mixer channel is an EQ (just Fruity Parametric EQ2).

Often it’s all you need and It also means any additional plug-in I load up is an active choice rather than a passive one. 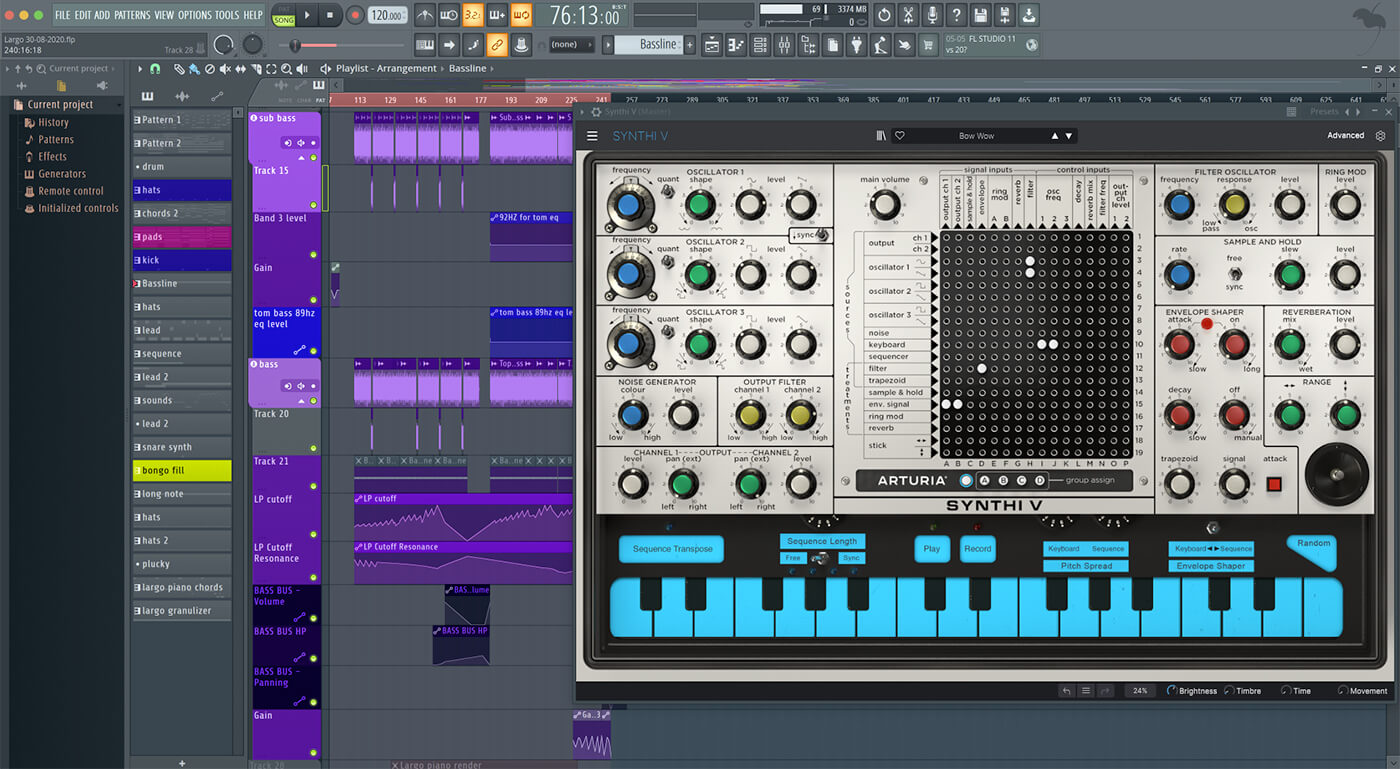 What about your guilty pleasure plug-in?

FLEX. It could be considered ‘guilty’ because it’s not really a true synth, it’s more of a sound bank and I don’t feel that it’s super complex or unique – but at the end of the day I love the sounds in it.

I’ll often layer up multiple instances of it, automating their relative volumes, and add additional effects on the mixer channel to make it sound more individual. 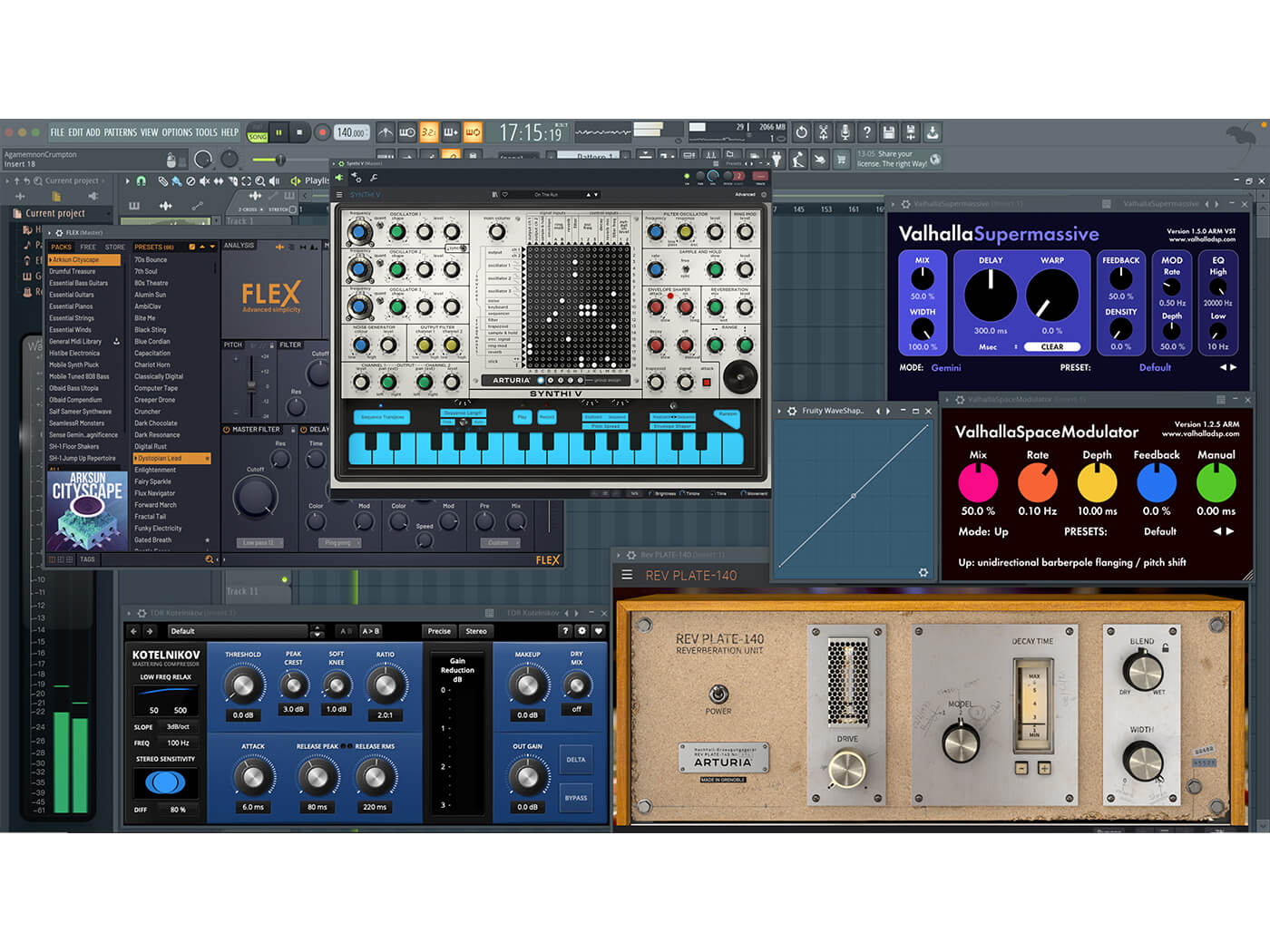 Arturia Synthi. I don’t completely understand how it works and I remember getting a bit stuck making the bass sound in Submerged – I had a specific sound in mind that I couldn’t get to. At first, I tried reading the manual but, in the end, I just circumvented the problem using alternative processing techniques – it involved rendering out lots of recordings, applying effects, re-mapping and re-recording.

It comes to show that there are often multiple routes toward a desired sound and I don’t need to feel held back by a lack of knowledge.

What’s the music scene like in Oxford at the moment, and what local artists are inspiring you?

While Objekt, Djrum and Batu all have Oxford connections – most of the people that get excited are my mates who went to uni here with me here. A lot of them technically aren’t local anymore but they’re still a product of Oxford’s music scene on some level.