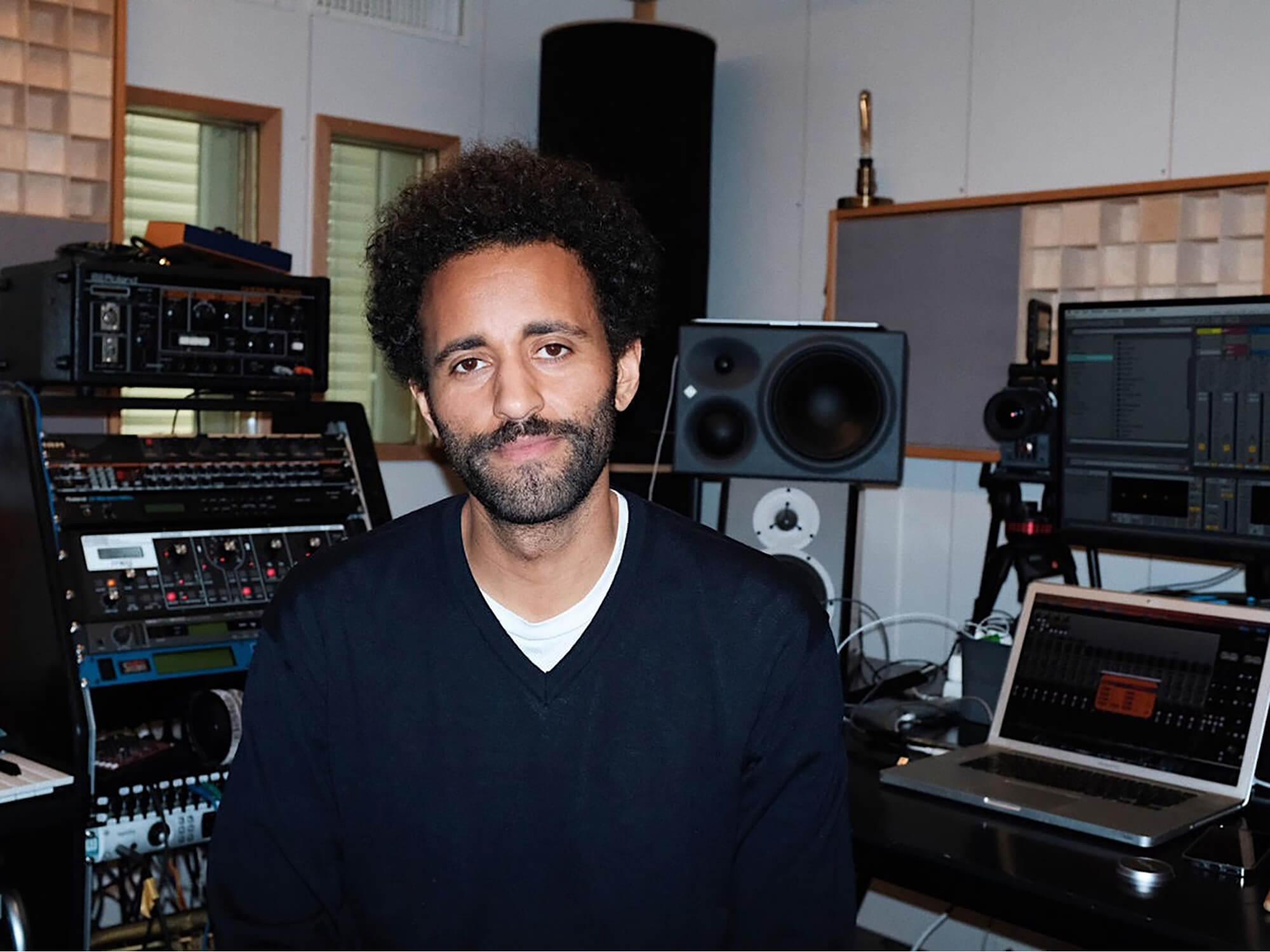 Plug-ins I Actually Use: Jimi Jules

Renowned Swiss DJ and producer Jimi Jules takes us through the essential plug-ins that helped him craft his latest club-shaking record, +.

Swiss multi-instrumentalist and producer Jimi Jules cut his teeth as a DJ in Zurich, before a collaboration with German producer Oliver $ on the infectious, Beatport chart-topping dance track Pushing On propelled him into a new career chapter; earning him Europe-wide recognition and a residential DJ spot at Berlin’s iconic Watergate club. In 2016, two years after the success of Pushing On, Jules released his debut album Equinox and cemented his place in the European dance scene.

Now, after a six year interval that has seen him sign to Berlin’s venerable Innervisions label, Jules’ sophomore album + has arrived. Executively produced by Innervisions’ own Steffen Berkhahn, aka Dixon, + boasts a delectable selection of floor-fillers. This includes the highly-regarded single My City’s On Fire, the Nathan Daisy-featuring Shakin’ and Clinomania, featuring the skills of Elton John backing drummer Nathan ‘Tugg’ Curran.

Here, Jimi takes us through the plug-ins that make him tick, explaining why he modestly describes himself in the studio as “a simple guy.”

Hey Jimi! + is your first full-length album in almost six years. How has your studio practice evolved during that time?

Honestly, I work more or less the same way I was working back then. However, I know my tools much better now and have grown with them in terms of sound and arrangement. Most of the time, I record analogue and acoustic sounds that I process with digital guitar pedals, Ableton Live and Universal Audio plug-ins.

I enjoy pushing my equipment to the limit, and finding new ways to develop sounds. I need to feel comfortable with all the tools in my studio, so that I can build new sounds based on my thoughts and my inspirations. 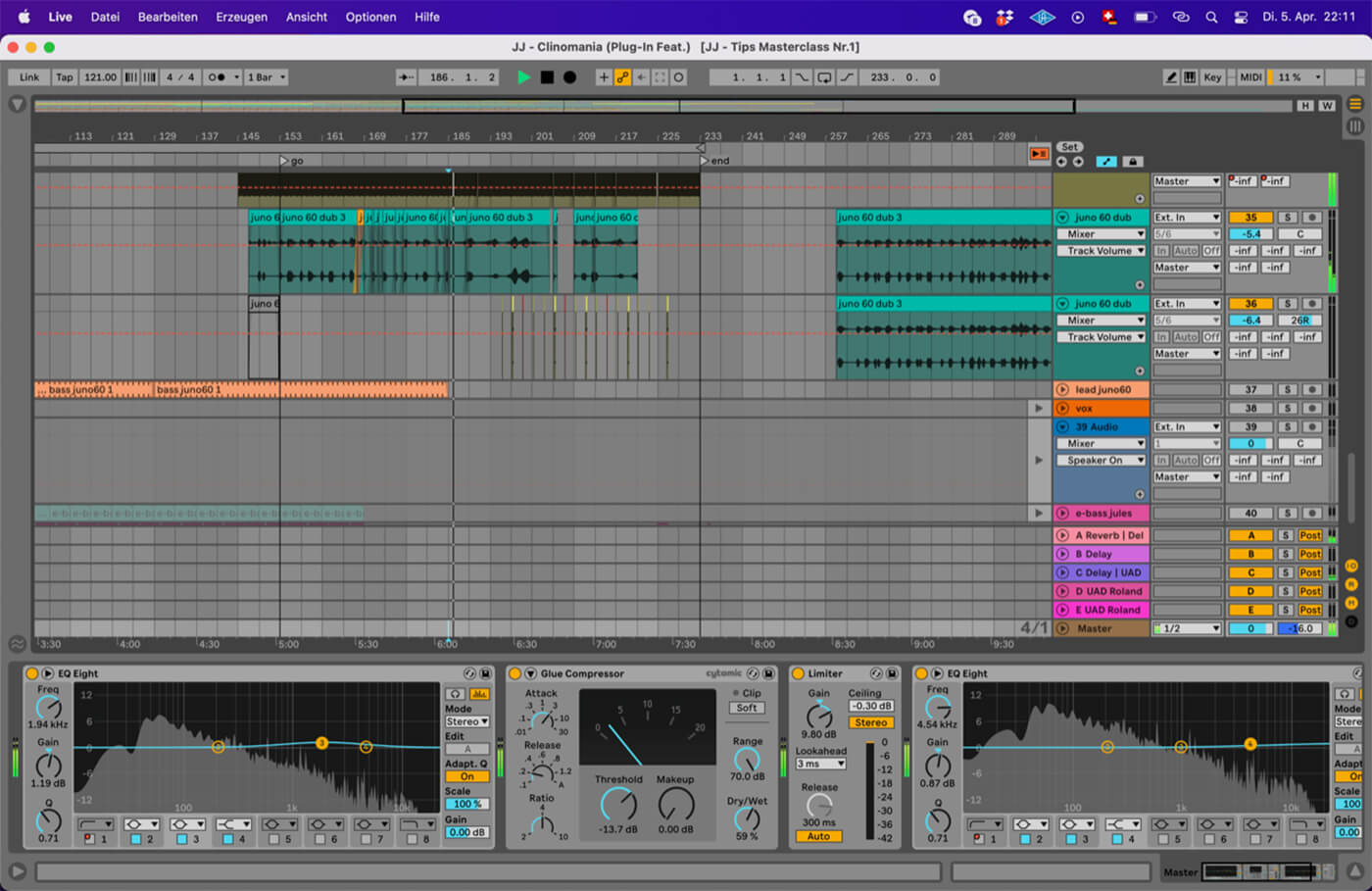 The record features several well-placed guests, from Nathan Daisy to respected drummer Nathan Curran. How did you go about choosing the right collaborators for +

I like to go with the flow, so I generally think about a suitable collaborator when I’m finished with the production. Nathan is an old friend and we’ve worked together on several musical projects since my last album. Shakin’ was originally made on my couch at home, simply playing around and enjoying the sound. I’d never made hip-hop beats before but he encouraged me to try it and it ended up being smooth and quick. Call it luck, maybe?

A few months later, he met his friends Dave Aju and Aquarius Heaven and sent me a voice message with the track. I was amazed with the result.

For Clinomania, I’d looked for a real and dynamic drum frame and a friend recommended Nathan. I contacted him, sent him the track along with my thoughts, and a few days later he sent me the result. I guess he just felt the track and Joy Tyson’s vocal part, and I am really happy with the the whole process and how it worked.

CLA Bass by Waves. I am a bass guy, and most of the time I go overboard with it. Using this dirty little plug-in I can finally program a super nice bass emulation on the road and tweak it the way I can’t with my real Fender P-Bass. It’s super-easy to use and it does the job. At the moment, there are only a few unreleased demos on my USB stick, but soon there will be a release with that special sound. 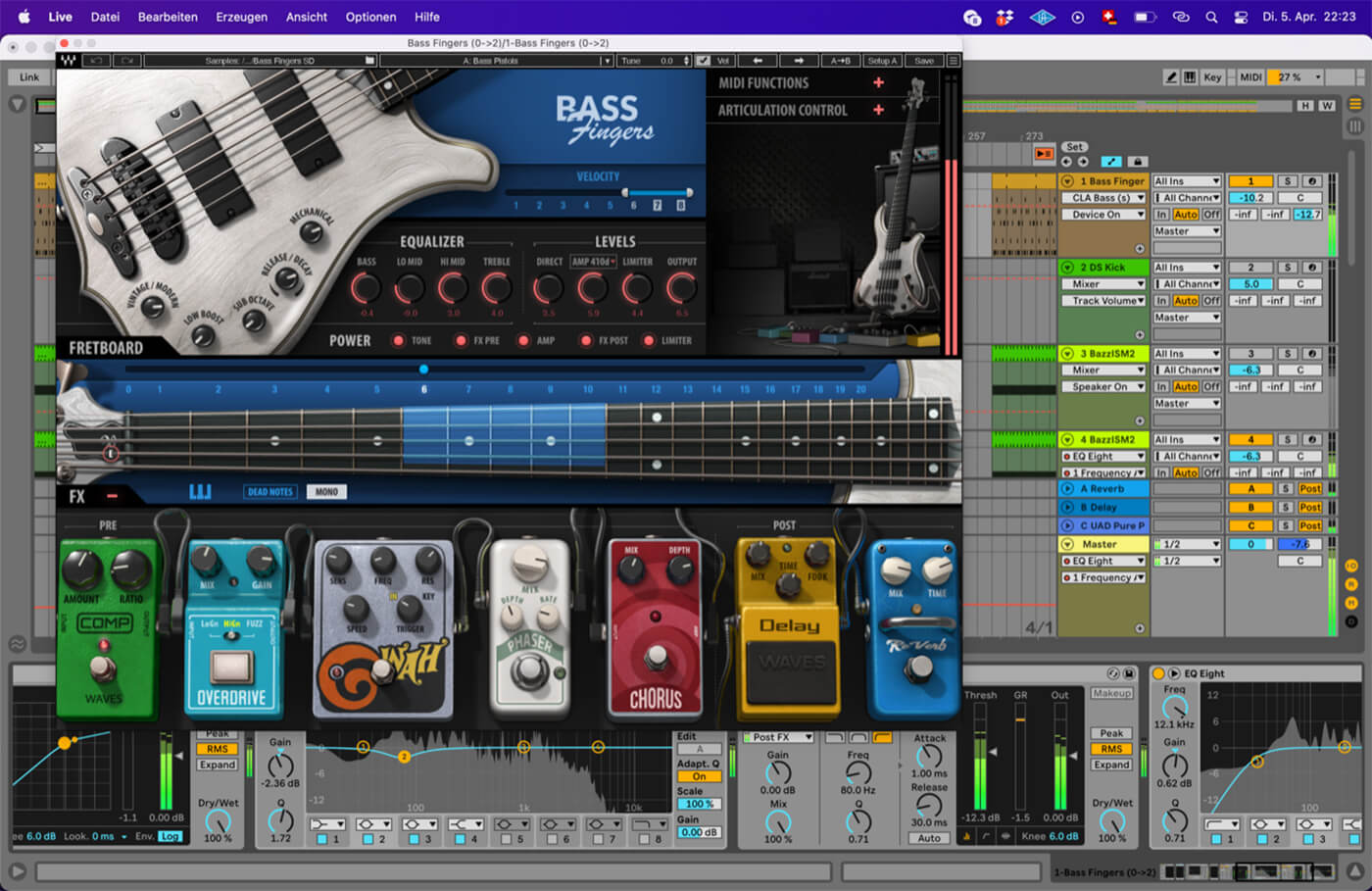 The best value plug-in is also one of the most used plug-ins on my computer. It’s the Bazz-ISM Kick plug-in by ISM, which is a German company. It’s simple and effective to use because of its clarity and powerful parameters. I’ve loved it since the day I got it and I will never delete it. It costs around €30. 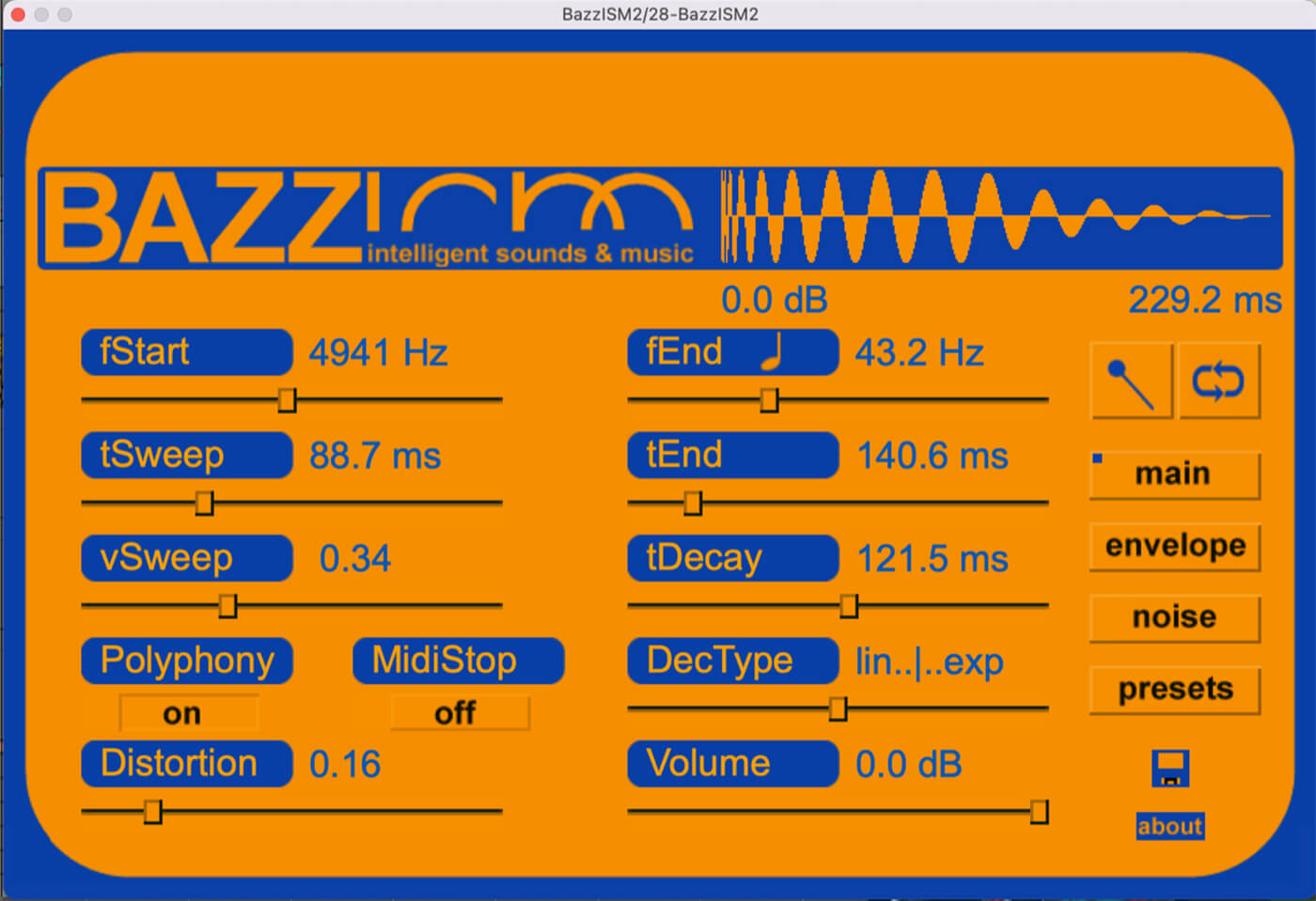 Definitely the ones from Universal Audio. They are expensive but worth the price. My favourite is the Roland Space Echo, now called Galaxy Space Echo. I’ve used several other Space Echo-style plug-ins before and also have a real one in my studio, but I have to say, they nailed it in allowing me to create chaos, subtle textures & delays on my productions.

I’m a simple guy, but things have to work fast and I have to be able to rely on them. I use most of the Ableton and Logic factory presets (most of them such as EQs, compressors, reverbs, delays) when I’m on the road or in places I can’t take my UAD interface. They sometimes don’t sound realistic, but I found a way to use them effectively in my productions.

[Laughs], shame on me – I always use the Ableton Glue Compressor and a subtle limiter on the master channel to bounce my tunes to road-test them.

In my opinion, it’s not a good solution but, hey, it works for me and when somebody wants to release my music I will work with professional mastering guys like Matthew Styles from Horizontal Studios or Bo from Calyx anyway.

My City’s On Fire has become a recent dance floor favourite. Which plug-in would it not be complete without?

Well I had to finish My City’s On Fire quickly because I had to get home to put my kids to bed. I literally made the whole song in around 15 minutes, as I didn’t have the time to fiddle around with cool analogue gear or UAD plug-ins.

The song still sounds kinda basic to me. I only put a little reverb from Ableton Live on my voice to give it a bit of room. And because the bass was a one-take recording, you might notice an annoying Moog Matriarch reverb on it! 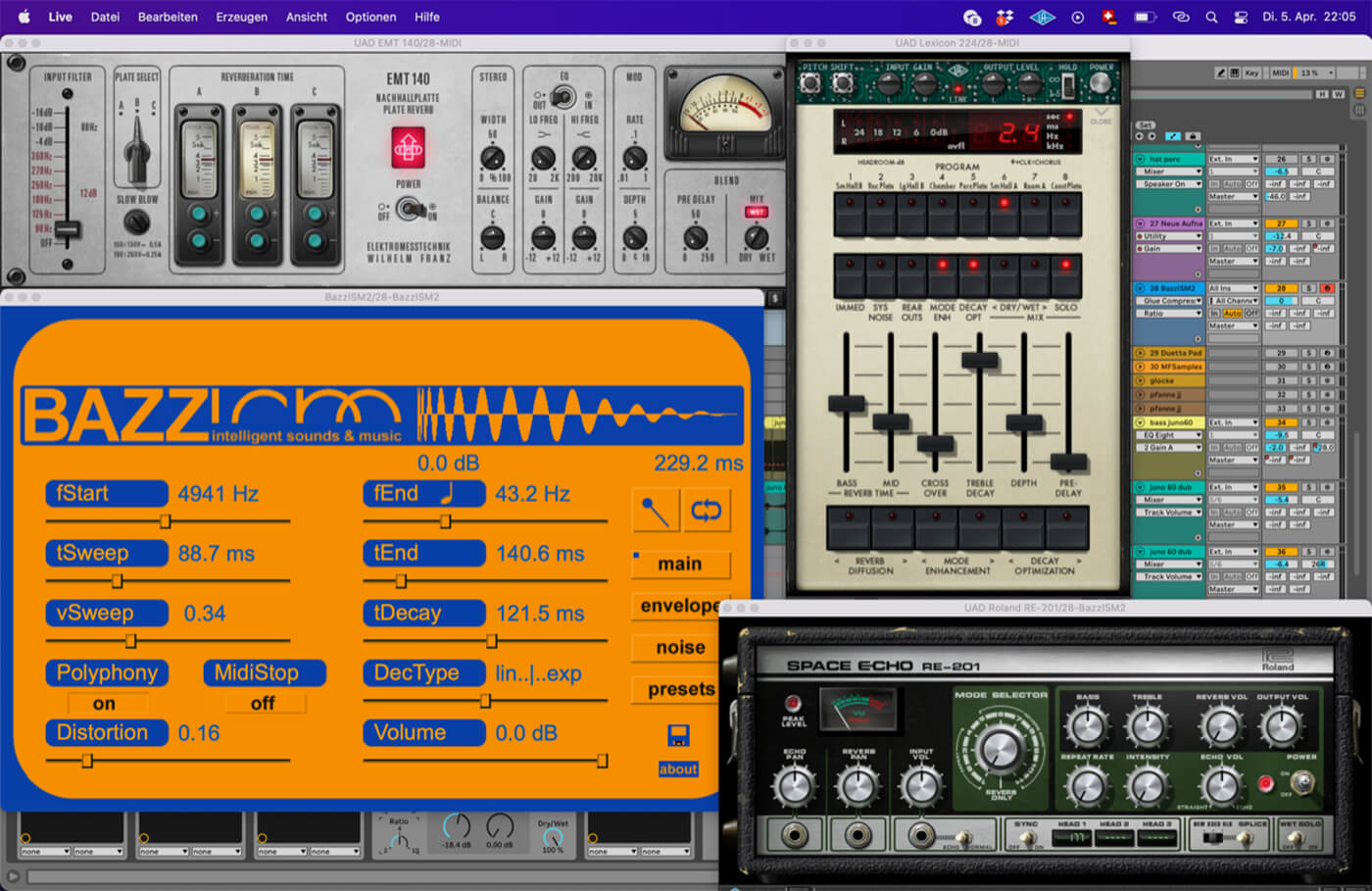 The drum sounds of + are very detailed, very musical. Can you tell us about the plug-in chain you used for some of them?

It’s always different, but in most of my productions I use a UAD EMT 140 for short room reverbs, a UAD Lexicon for long reverbs, simple delays from Ableton for the stereo spectrum and the UAD Space Echo for giving the track a certain chaos, dirtiness, and depth. 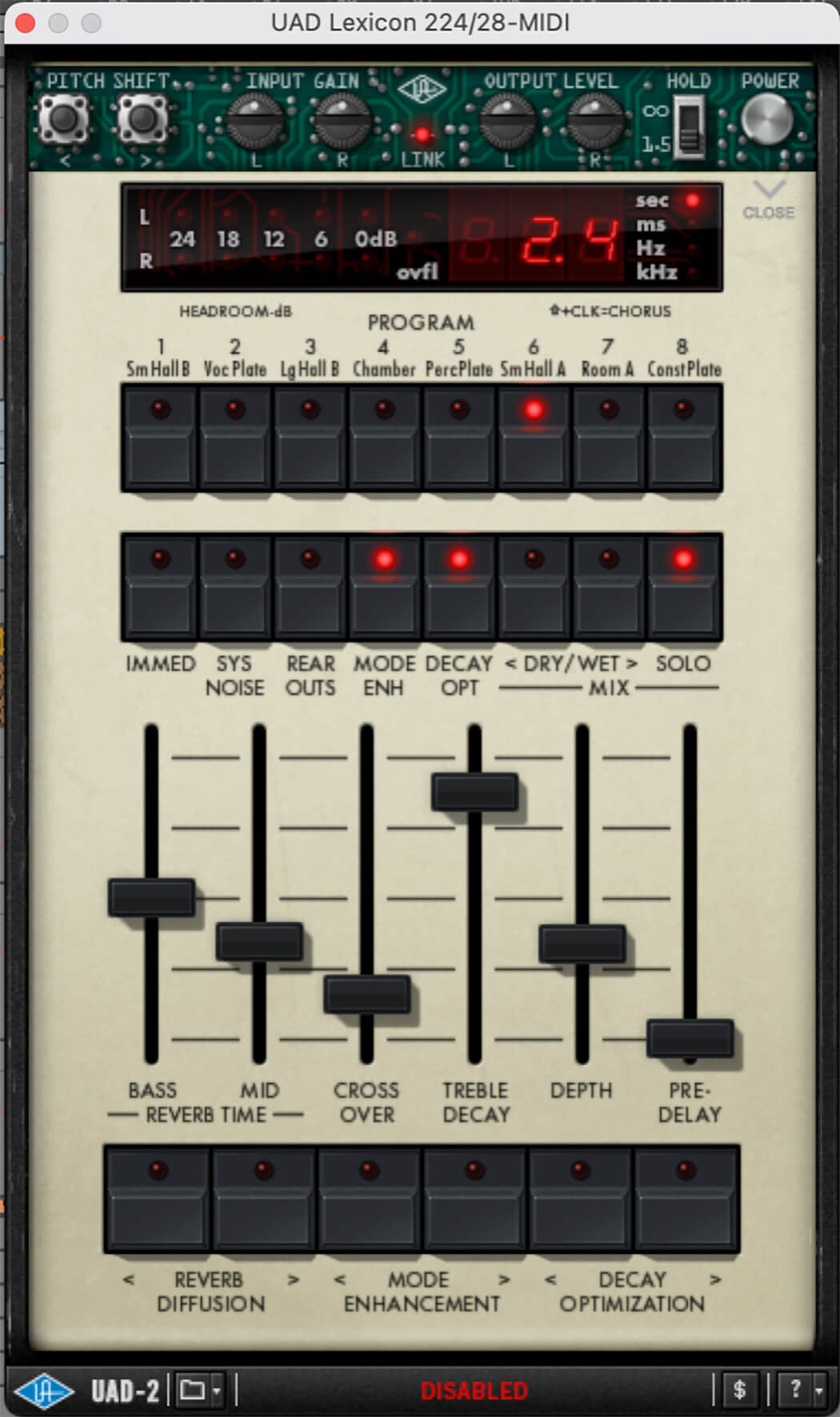 My special-sauce wonder was always an old digital guitar pedal I bought on the flea market many years ago. It gives me that certain sound I’m looking for. I tend to record everything super dirty. Not because I want it like that, but because most of my gear is super noisy.

I use most of my plug-ins to make tracks a bit cleaner. For example, I’ll layer chords with a simple and clean Operator sound from Ableton and double it with a real Roland Juno-60, Yamaha DX7 or Crumar Bit 99. That gives me the ability to sound raw and analogue, but fat and precise at the same time.

Until two months ago, I was still working on the second computer I ever bought more than 12 years ago. I wasn’t able to update or install anything new for seven or eight years. For future releases I’ve just bought a new Apple Mac Pro M1, so give me more!

You were born in Switzerland and began your career DJ-ing at clubs like Zukunft in Zürich. Can you tell us a little about the electronic music scene in Switzerland today?

I love the electronic scene In Zurich. It’s small and cozy; everybody knows each other and people help you out if you need something. It doesn’t matter if you are underground, commercial, or an indie musician. “Better Together, Forever” – that’s the way I feel about the scene.

What advice do you have for aspiring producers working with plug-ins?

First things first: just do. Spend as much time as possible making music and recording things to your phone. Try to find your own sound, always be tweaking and trying new combinations and layers, and comparing soft-synths with effects plug-ins. Sometimes the weirdest and worst combinations that fuck up your computer are the ones that give that certain spark you’re looking for.