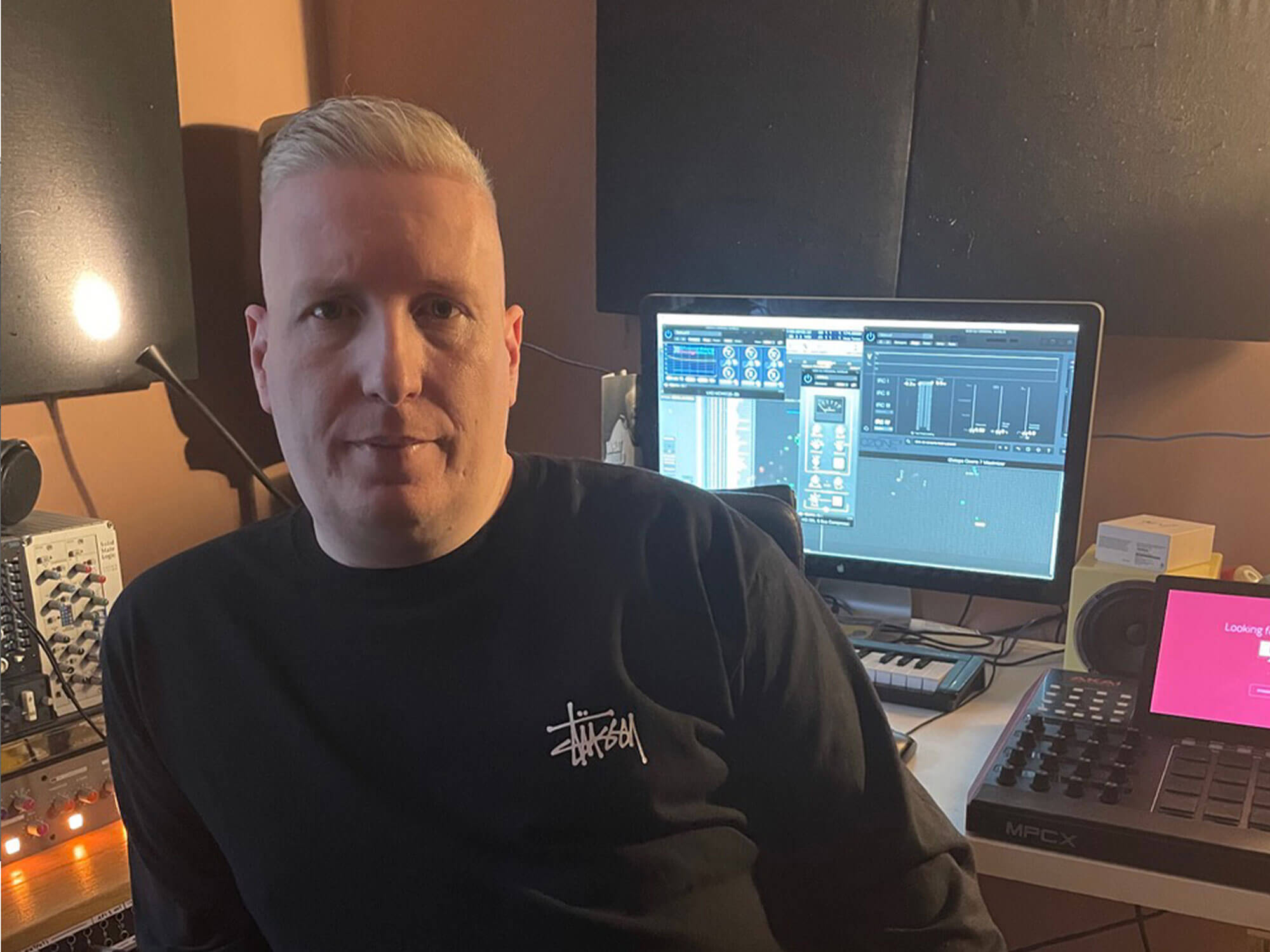 Plug-ins I Actually Use: Danny Byrd

Legendary drum ‘n’ bass producer Danny Byrd shows us how he made Selecta feat D. Double E, and which plug-ins were vital in the production.

If you’re even slightly into drum’n’bass, you’ll know Danny Byrd. The Bath-born producer and DJ is a titan of the UK scene, with abundant releases on the revered Hospital Records label that achieved him number 1 on the Dance Singles Chart, placement on the UK Top 40, numerous BBC R1 plays, a BBC R1 Essential Mix and more. Now, he’s teamed up with legendary MC D Double E to release Selecta on Ministry Of Sound. This release sees Danny fuse his roots of UK garage, jungle, and early drum’n’bass, centred around a horn sample he found on a sample CD from the 90s.

But how did Danny transform this arbitrary sound into a modern dance anthem? In this outing of Plug-ins I Actually Use, he lets us peer into his DAW and find out. Danny explains why he was inspired by the jungle sounds of the mid-90s and how he used modern plug-ins to hark back to that era. He also explains how his process has changed since he first started producing music, and which software he always sets up on his mastering bus.

Hey Danny! Congrats on the release of Selecta. What made you go for a mid-90s d’n’b vibe with this one?

Thank you very much! It’s been one of the best experiences of my music being released so far yet. When we started this track with co-producer James Watts, we were referencing a lot of the d’n’b that we grew up on, like Prisoners of Technology and 2 Degrees by TNT – these were the tunes that smashed it when we were out raving. It’s always fun to reference those eras but with modern sonics so that it works in today’s club sound systems. A lot of those bass sounds from that time were made from the Akai Sampler’s test tones, so it was really inventive stuff and was a massive inspiration for us. 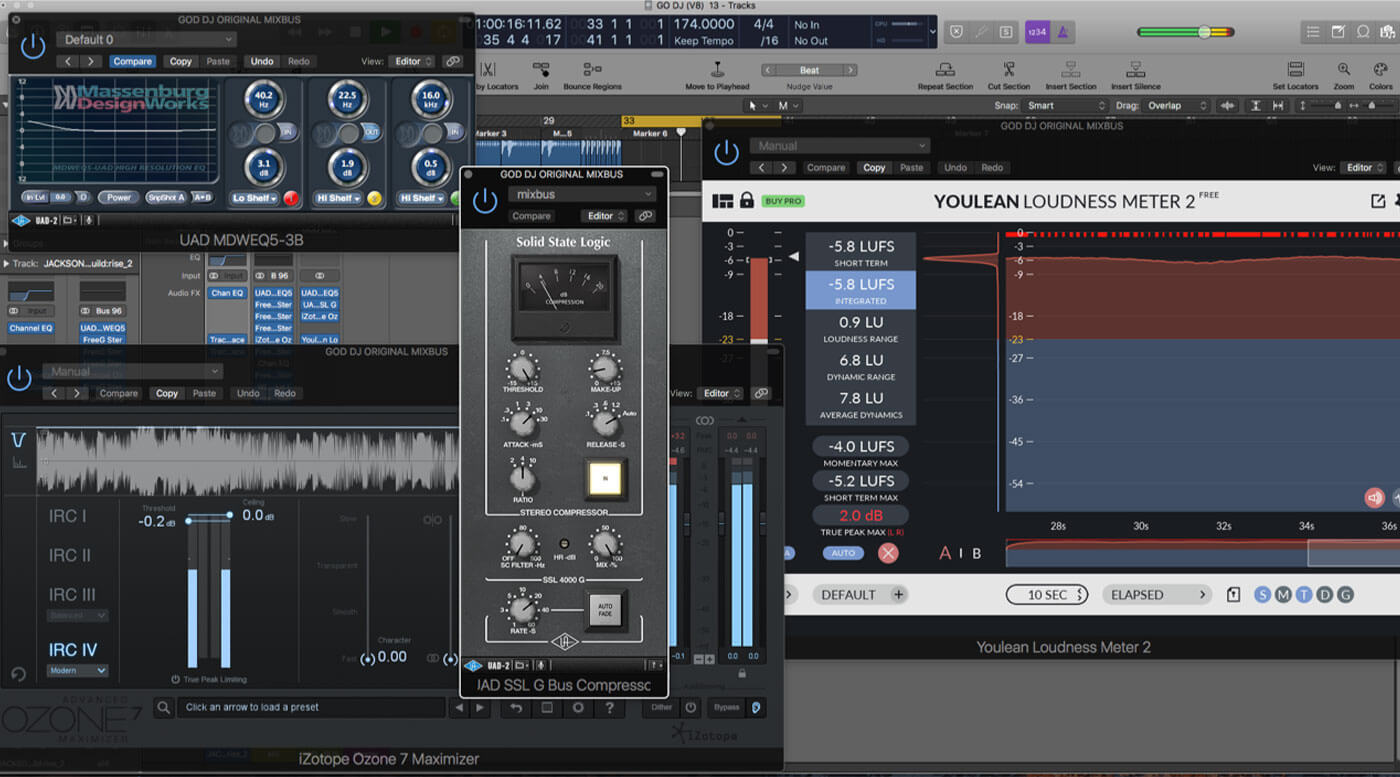 What techniques did you employ to give it that vibe? Did the old sample CD have anything to do with it? We’re surprised you still have your hands on it!

[laughs] Well, I didn’t have the sample CD with the horns on, so I had to track it down on Discogs, then find a CD drive to rip it – remember those? A lot of the techniques come from the modern way of working: layering a few kicks and snares on top of each other but then using the classic breaks on top of that to give the drums some depth. Slamming them through a drum bus with compression and limiting wasn’t really possible in the same way back in the 90s. A lot of the breaks and sounds are samples that I’ve been collecting for over 20 years, so there’s always something to dig out of there.

You’ve been producing for quite some time now. How much has your process and workflow changed in that time?

I always look back to this golden era of producing when I was using an all hardware setup with an Akai S3000/5000 and an Atari ST, but that was only about four years of my career. The rest of my career has been all in the box after moving into Logic Pro in 2002. I hated all-digital productions at first – I found it so different with the headroom and the way sounds distort. Luckily, I’ve got my head around it now, but I still swear that the Akai sounded better than the tools we have now. I’m building a new studio at my house soon, and I want to have a separate corner with an all-hardware setup, like an S6000, Atari ST and a few synths. 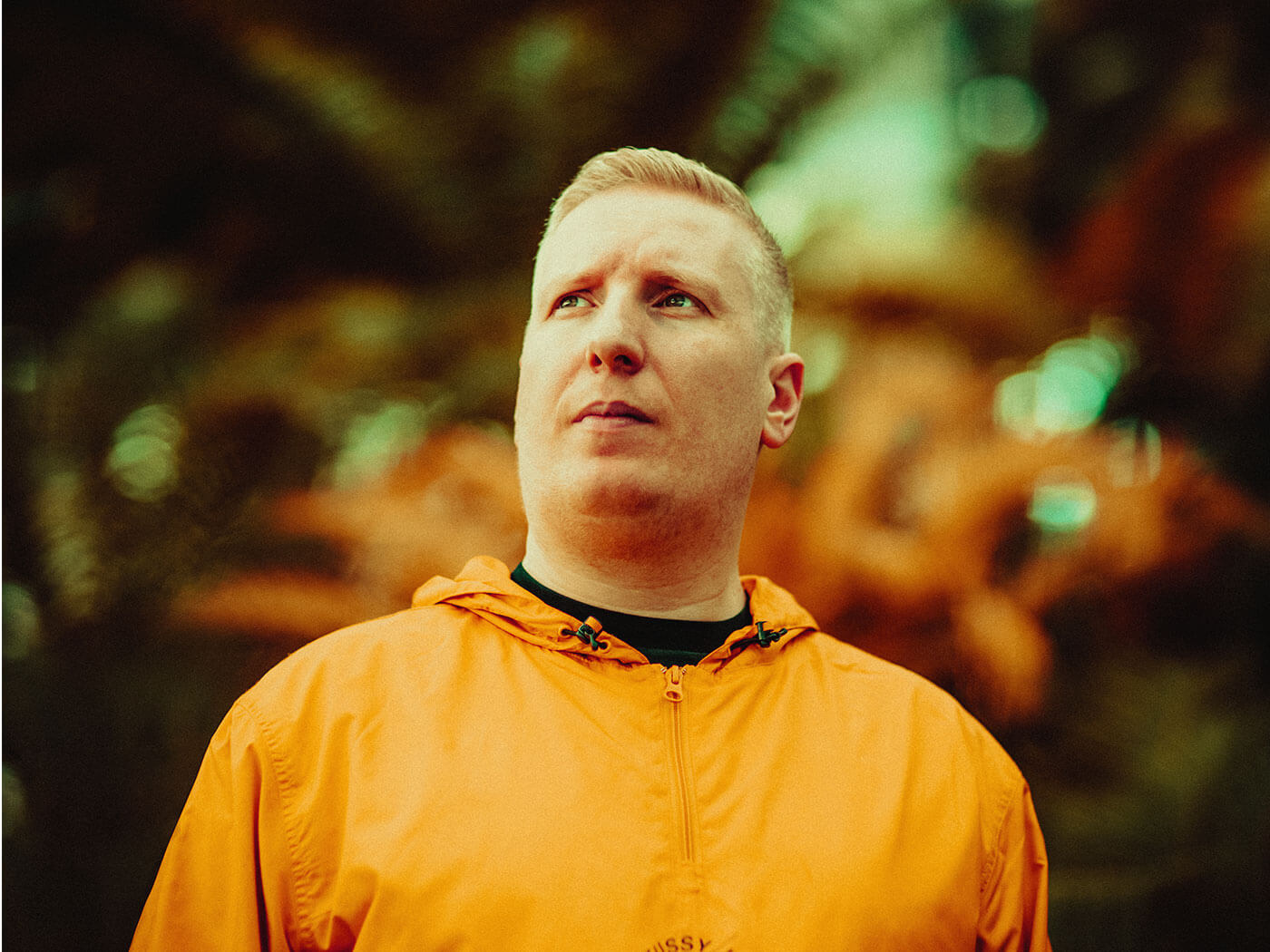 Is there anything else you miss about electronic music production from its earlier incarnation?

I sometimes miss that special feeling that you had when we had hardware in the sense that if you owned a sampler back then, you were dead serious about your music because a sampler was big money back then. But plug-ins and DAWs have made music-making easy and affordable to enter now and I think that outweighs that silly nostalgia – I’m not into elitism. I just miss those big music shops like Digital Village and Turnkey back in the day!

My latest purchase was the Shaperbox 2 bundle by Cableguys. A friend of mine, Steve (who produces under the name Akas), recommended it to me, and they were in a Black Friday sale, so I felt I had to indulge. It’s still early days with it but you can come up with some mad modulations of sound. It’s great for filtered chords and bass, too. In fact, I much prefer to get a solid tone on a synth for bass but then modulate it with external plug-ins. I just always feel like I’ve had better results like that. The Brookes Brothers have said the same – another plug-in that is one of our favourites is Etch by FXpansion.

The best one is called FreeG Stereo by Sonalkis. It’s a volume plug-in, and it’s amazing for small, precise movements. I find it so much easier to balance things with this plug-in than with the actual faders in Logic. It’s also cool to try a sound 0.33db up, bypass it, and see if it works in the mix with that subtle change in volume. I highly recommend it. 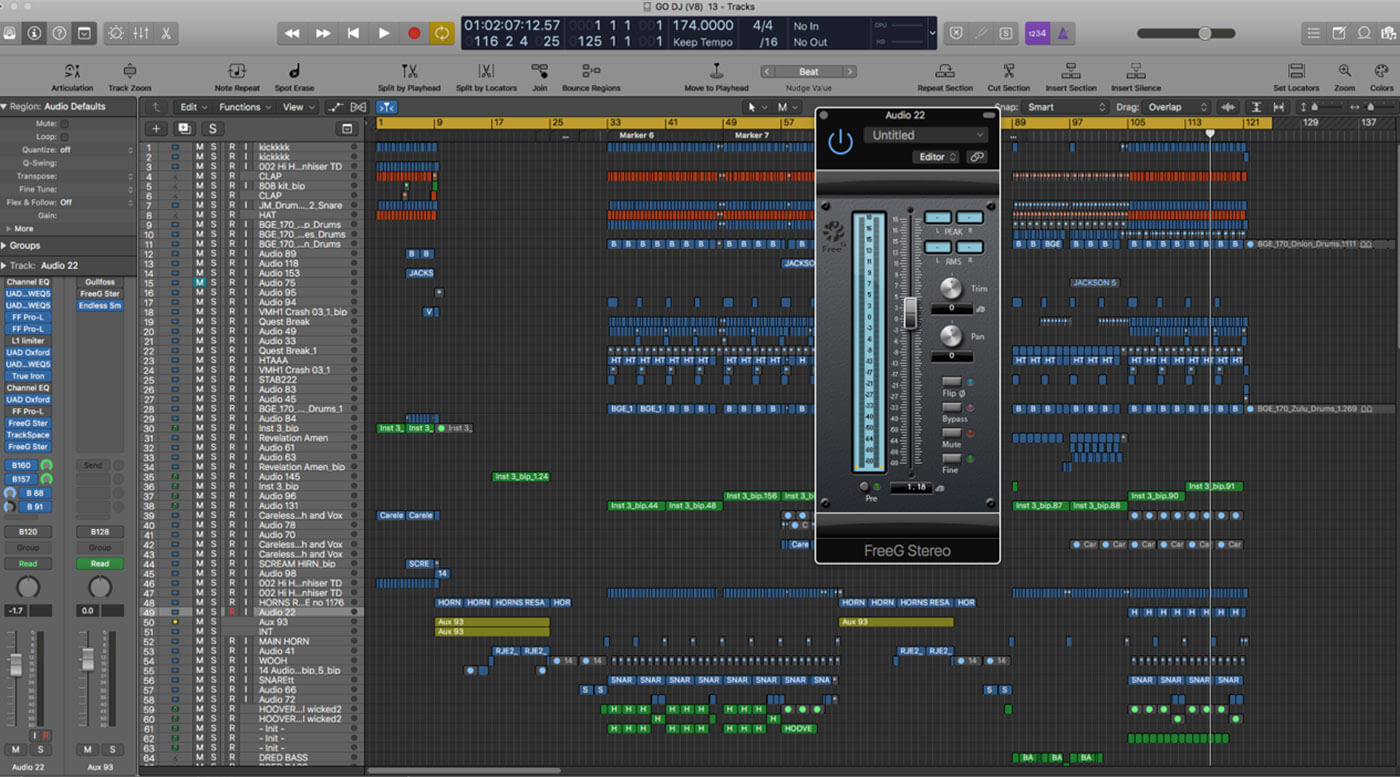 Best value plug-in you own?

Plug and Play’s Clarisonix, which if I am not mistaken, I got for a like on their Facebook page. The Clarisonix plug in is excellent for saturation on your sub sounds. It makes stuff ultra-heavyweight, which is sometimes needed, especially for a tune like Selecta. That’s is in the key of C, which is not always the best key for club tunes. It can be too much sometimes, but I find a little bit of it can go a long way. 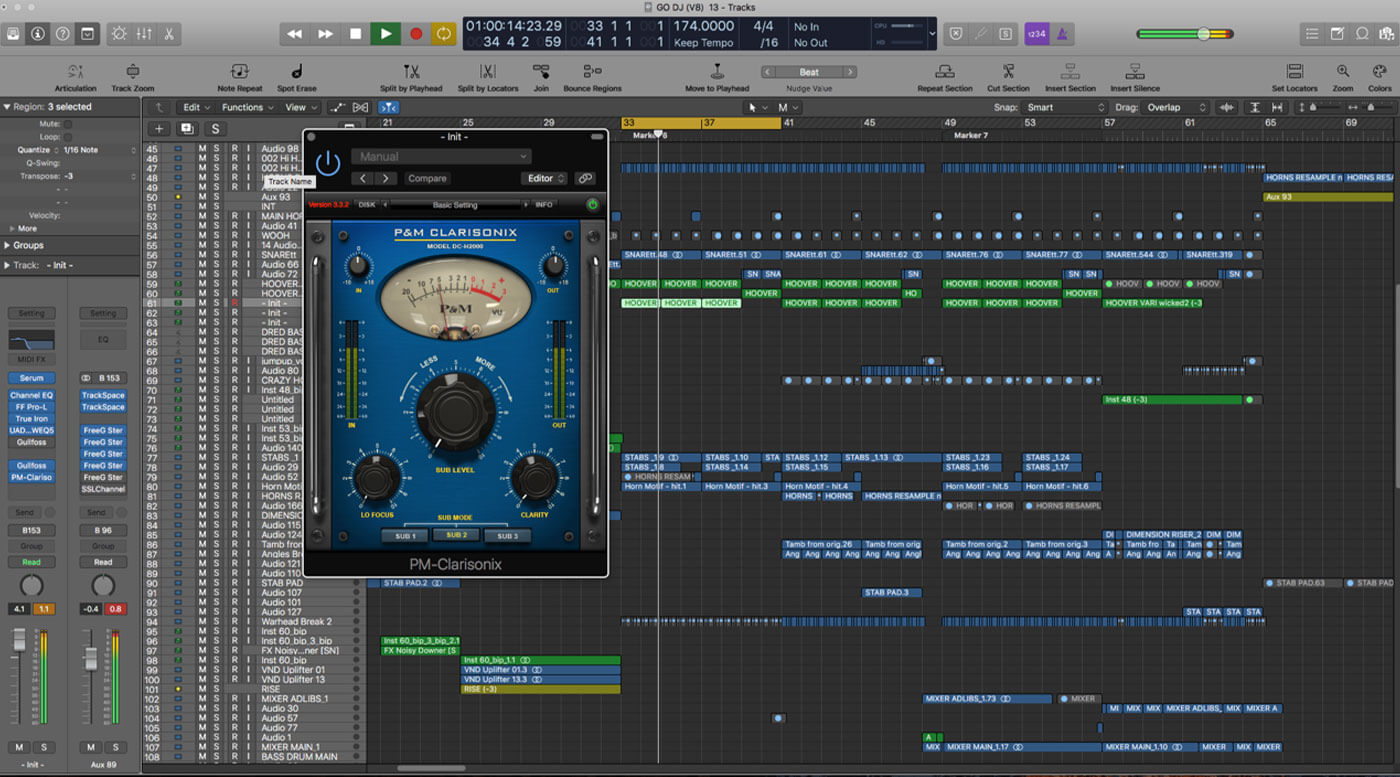 Probably any of the UAD plug-ins. They’re pretty expensive but usually worth it. There are some plug-ins that I’ve bought, such as the Culture Vulture or the API2500, that I hardly use, but they’re excellent – maybe I’ll try and work them in for my next tune. The best UAD plug in for me is the SSL G Bus Compressor. It sounds just like the hardware for the mix bus. Also, I really like the Massenburg MDW EQ for UAD. That is my premium EQ.

Probably Logic Pro’s built-in sampler; it just works, and I’ve got a massive library for it that I have built up over the years. Also, the Logic Channel EQ for quick bottom end cuts, as it’s just two clicks at the top of the channel and it’s there. Bitcrusher still gets some good use, even though it’s 20 years old. There’s nothing quite like the Logic bit crusher!

I always start with the MDW EQ as the first insert, boosting a little around 40hz and some top-end sparkle at 20khz. That goes into an SSL Bus compressor with the attack set to 0.10 and the release on Auto, and the Ratio either at 2:1 or 4:1 to glue the mix together. This then goes into an iZotope Ozone maximiser to finish off the track with some limiting.

I don’t go too crazy on the master bus as I want to leave the mastering engineer something to play with. I don’t do any stereo widening of the top end. Also, at the end of my chain, I always have a LUFS meter of some kind to make sure that my mix isn’t going below 6 LUFS. Some d’n’b is 3-4 LUFS but I find it works better easing off that for more musical stuff.

Which plug-in would Selecta not be complete without?

Wavesfactory Trackspacer. It’s used so much on that tune to duck out bits of the track when the vocals come in. It’s one of the best tools in my arsenal. For example, on the Reece bass that I have on the drop, it has a lot of mid-range distortion on a parallel bus, which sounds great on the drop, but when D Double E’s vocals come in, there are too many frequencies fighting for space. So I used the Trackspaacer to duck every time the vocal comes in, and it really makes it all sit much better. 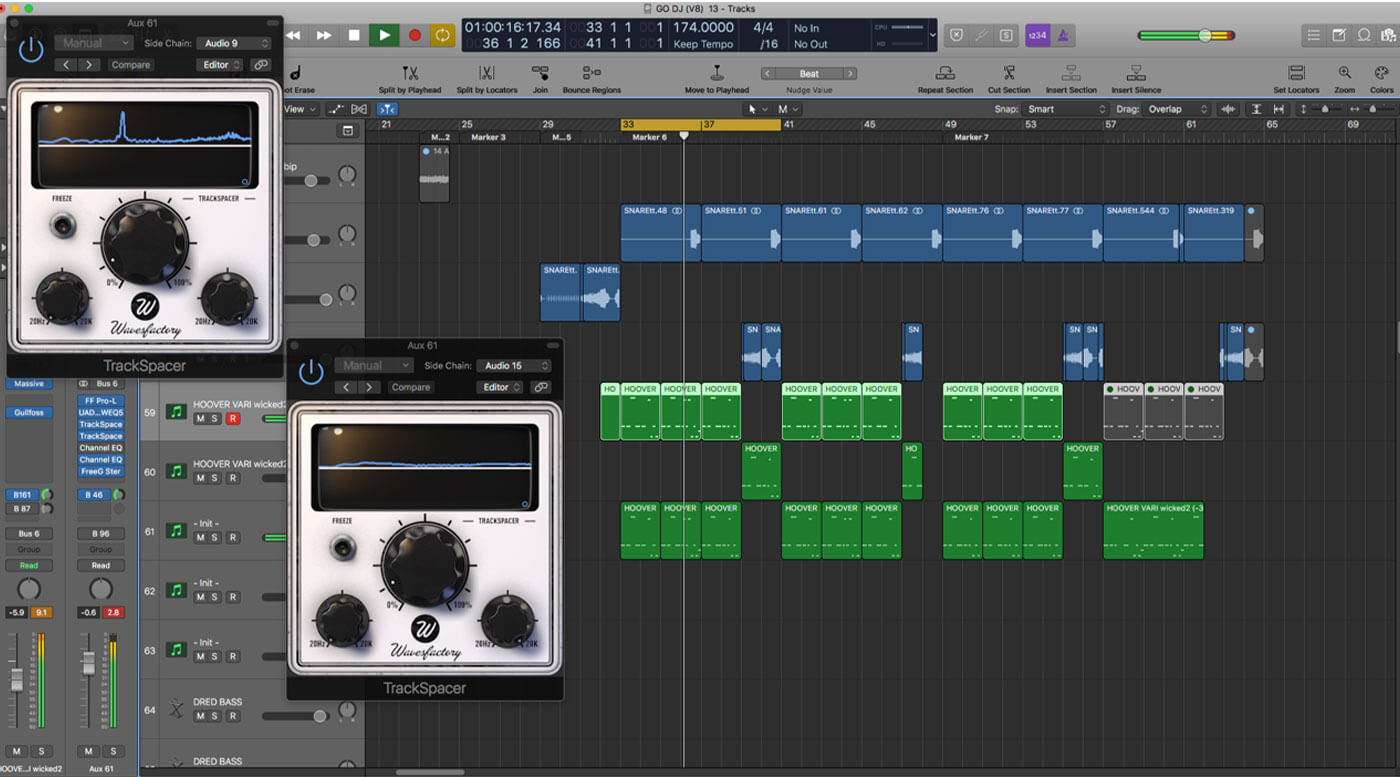 Sweetsonics Laser is an amazing ducker plug in for your sub-bass. Although Trackspacer is great for most things, Laser does the same job but is ultra-tight for ducking the kick to the sub, hence the name Laser. It gave me another 1-2 dB of headroom after using this on the bass. It’s so reactive and tight. I love it!

I am not ashamed to say I love Dada Life’s Endless smile. I use it on everything. In fact, I use it so much I almost don’t even hear it anymore [laughs]! 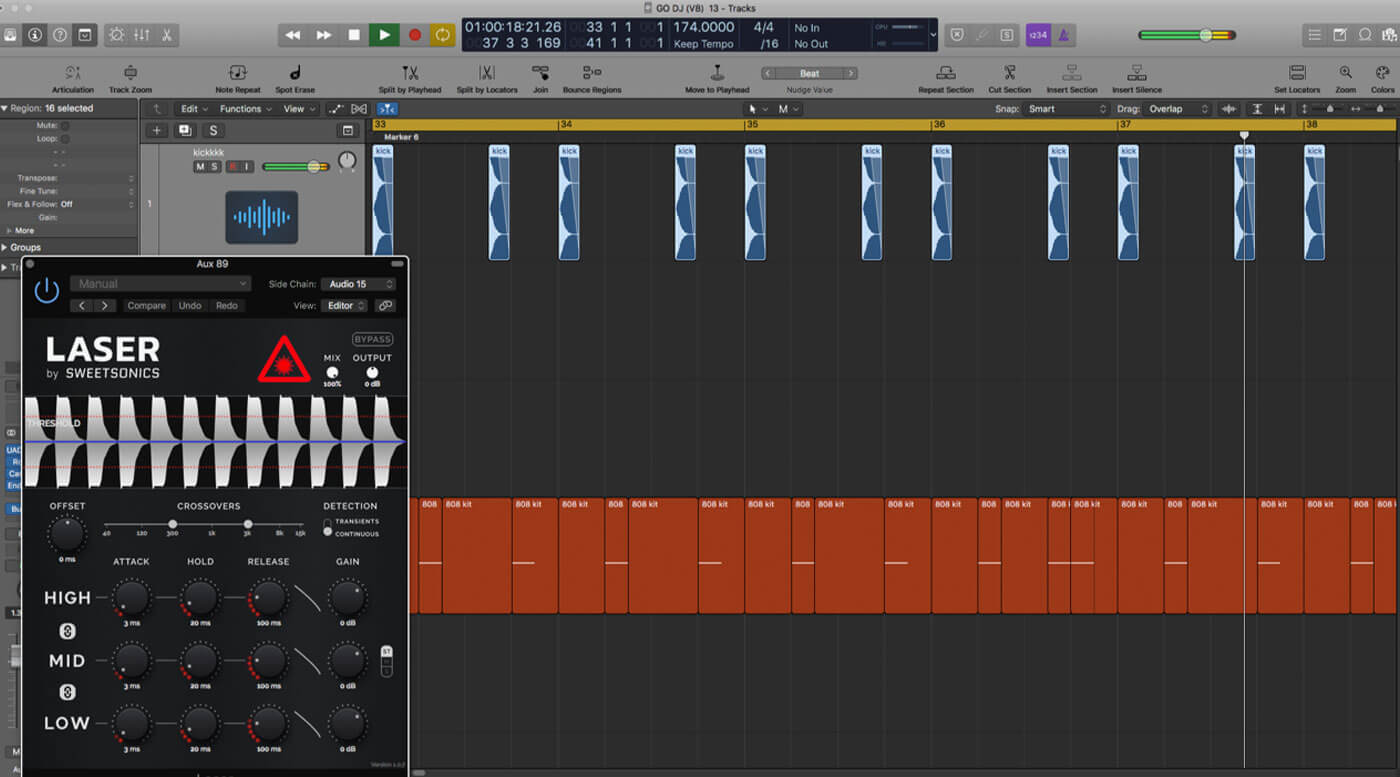 Soundtheory Gullfoss is one, for sure. It’s an automatic AI EQ, but all I know is it generally makes things more lively with the recovery up to 50-80 per cent. I have experimented with it on the mix bus but felt like that was a bit dangerous on reflection. You have to be careful with anything messing up your transients on the mix bus, I’ve found.

What’s the best piece of advice you’d give to aspiring producers?

Remember why you love doing it, because the business side of this game will deflate you sometimes. That’s why I think back to looking up to people like Roni Size and Krust back in the day and those original parties in Lakota, Bristol, that I’d be raving at, when in fact tomorrow night I will be playing that same venue 25 years later! I’ll remind myself when I’m feeling exhausted after the weekend.