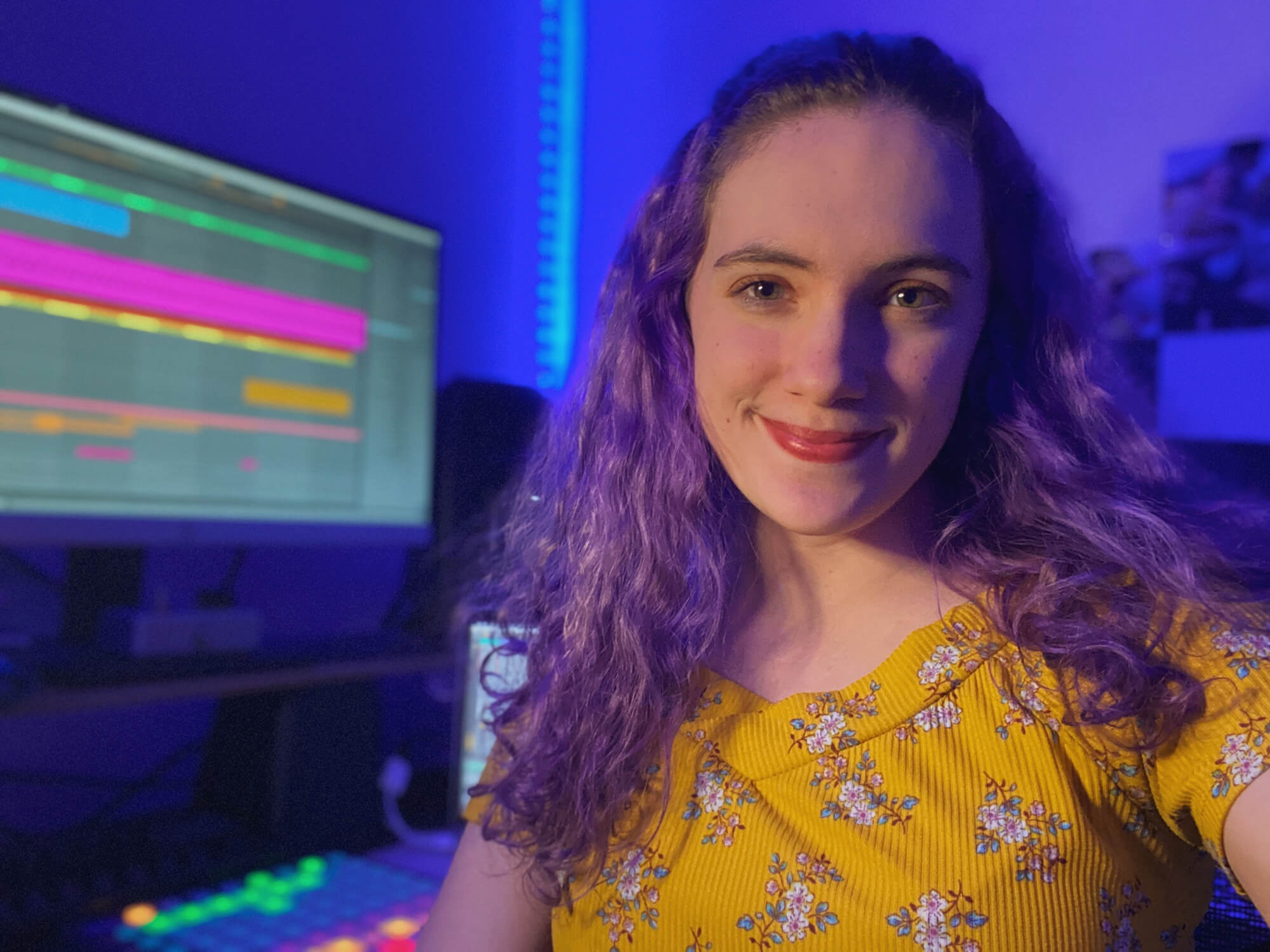 Maker of clean and crisp R&B with a phenomenal voice at its core, Annie Elise explains her latest EP’s themes and the plug-ins that made it happen.

American producer Annie Elise began her journey in music as a classically trained violinist, later delving into more electronic tones after discovering sounds she liked to see through a neurological condition called synesthesia. She’s a hit with fans of the big names – Ariana Grande, Dua Lipa, Camila Cabello to name a few.

Riding over chilled lo-fi R&B beats, she’s not just a voice but a formidable engineer and content creator, too. We spoke to Annie about the plug-ins she used when making her brilliant seven-track Breathe In, Breathe Out EP, how physical instruments played a part and how coping in times of grief became the driving force behind the release.

Hey Annie! Can you tell us more about the concept of breathing in and breathing out on EP Breathe In, Breathe Out?

This past year was incredibly difficult for me as I dealt with loss, sickness, trauma, and grief. In April 2021, my younger cousin Peter passed away after unsuccessful heart surgery. We were close and his death hit me very hard, and as part of the grief therapy, I went through something called EMDR.

EMDR is a form of reprocessing memories so that the effect on your body is less burdensome. In my EMDR therapy, we focused a lot on breathing and noticing how my body reacted to certain thoughts. A metronome would click and I would breathe in for four counts, hold for four, and breathe out for four counts. “Breathe in… breathe out…”

There were a number of ways this was translated musically. Sometimes it was literal – in the intro track Breathe In (Intro) you can actually hear me breathing in and out in the background. Sometimes it was more figurative – in Breathe Out there’s a musical release in the chorus where we switch from minor to major – much like the moment in EMDR where you have fully reprocessed the memory.

My favourite way that I translated this was in the flow of the tracks into one another. It’s meant to be an EP you listen to in one sitting. You come into the first track with a heavy heart and, by the end, you feel better – just like in my EMDR sessions.

This is your debut album – why an album? Why now?

For a while, it was difficult to think of myself as a legitimate artist. I felt that the Annie Elise project was more of a vehicle for my production than it was its own artist project.

Peter was a creative person, creating scenes with his enormous model train collection far before he was ever old enough to drive.

Peter was so vocal about the things he loved. And in reflecting on that, I realised I loved being an artist. Having complete creative control is a real gift and I had a story I wanted to tell. So I went full force into it, unapologetically following every creative instinct I had. And the result was Breathe In, Breathe Out. Through making this body of work, I have come to realise that I don’t need to wait for other people to label me as an artist. Simply making the art is what makes me an artist. 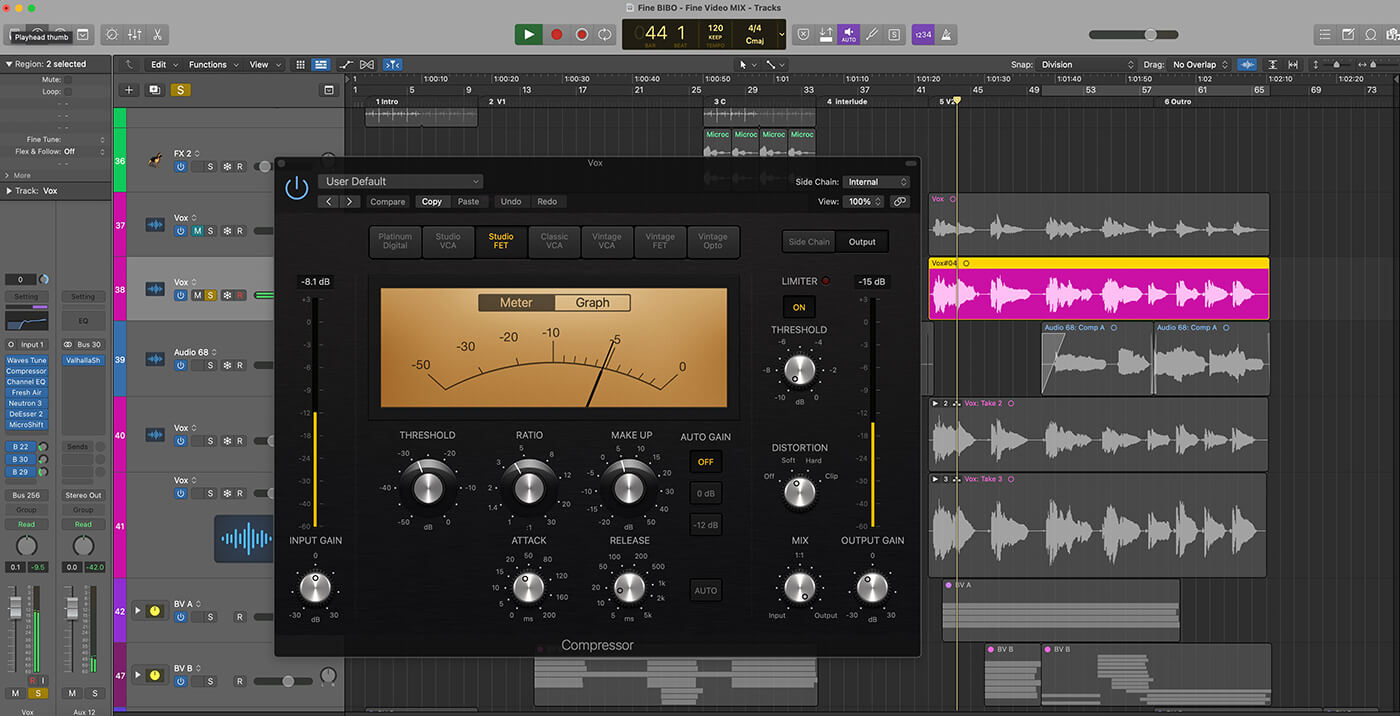 The Arturia V Collection. I can’t believe I didn’t buy it sooner. Soft synths are my production soft spot and the plug-in emulation of the hardware is impressive. The presets are fantastic, but I also have a library of sounds I made in it for the album. Surprisingly, where I use it most is in the background as a little extra texture.

Slate Digital’s Fresh Air is my secret weapon. I can’t believe it’s free – it goes on my vocal chain and my violin chain. There isn’t a single track on the album where there isn’t at least one instance of Fresh Air. You can hear it most in Changes in the violin tracks. 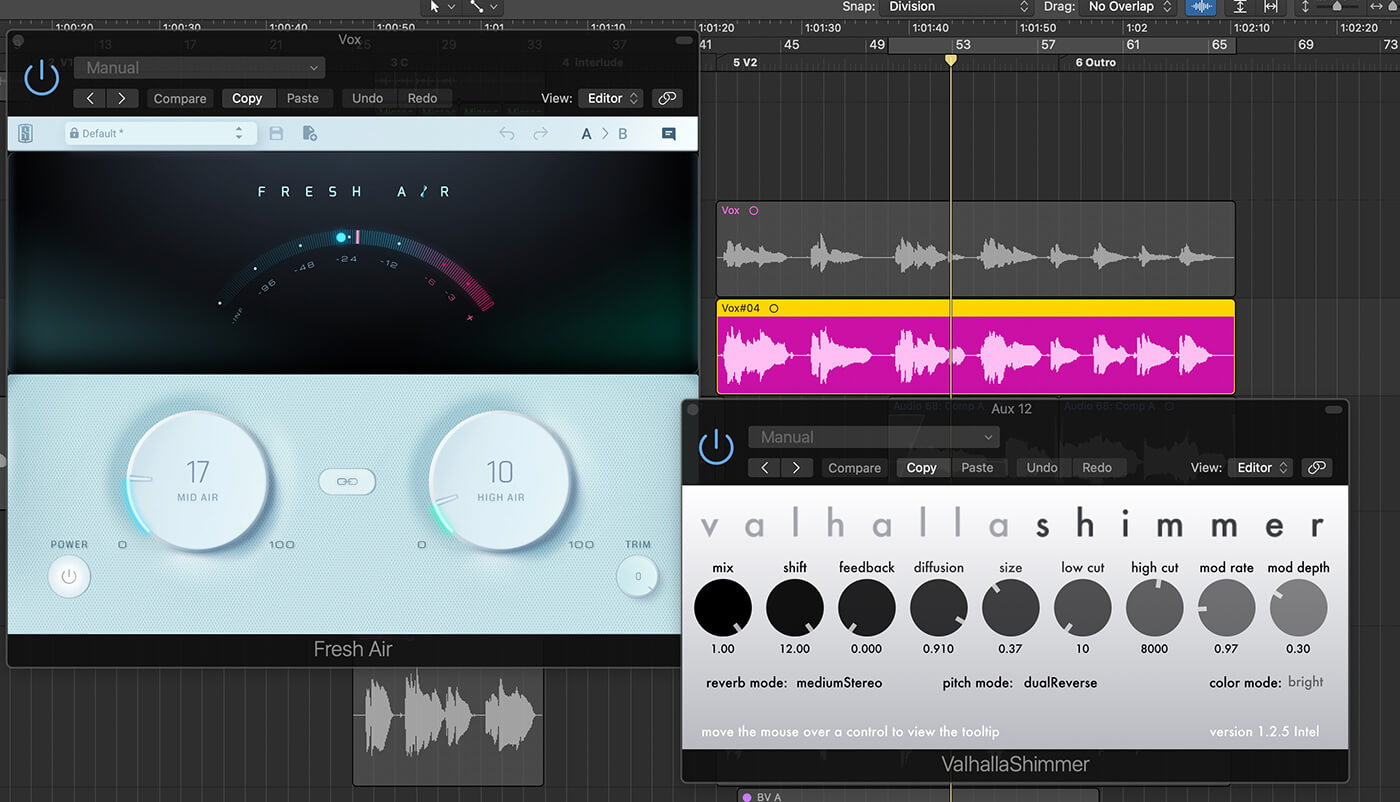 How do you know when you’ve landed on an idea for a track?

Honestly, with every track on this album, the writing process came easily.

Sometimes, I’ll put down a few chords or make a quick little loop and then I’ll do this thing where I sort of speak-sing and see what feels natural to say. Nine out of ten times I end up keeping what I write during those sessions. When ideas flow that easily, you just have to step back and let the song tell you what it wants to be.

Your vocals sound clean and crisp on Breathe In, Breathe Out. What kind of signal chain do you set up to help your vocals cut through the mix?

I love this question because the chain is so stupidly simple! It’s a Shure SM58 into my Apollo Pre Amp, then a stock EQ to cut the lows, stock compression to catch the peaks, Fresh Air for saturation, and lastly Microshift from Soundtoys for a little bit of width. That’s all that’s on the actual chain.

The secret sauce is in the delay and the doubles. There’s a separate left and right vocal track that is pretty much identical to the lead track. I use Synchro Arts Vocalign to line everything up and it sounds clear, crisp, and wide. Then the lead is sent to a fast delay with the highs and lows cut out, like a telephone effect, and it’s sidechained to the lead vocal. So when I’m singing, it doesn’t get in the way, but as soon as the phrase ends it’s like ‘woah!’

Check out the vocals on Changes and you’ll see what I mean. Getting the delays out of the way helps the lead vocal cut through, and all that mud gets out. 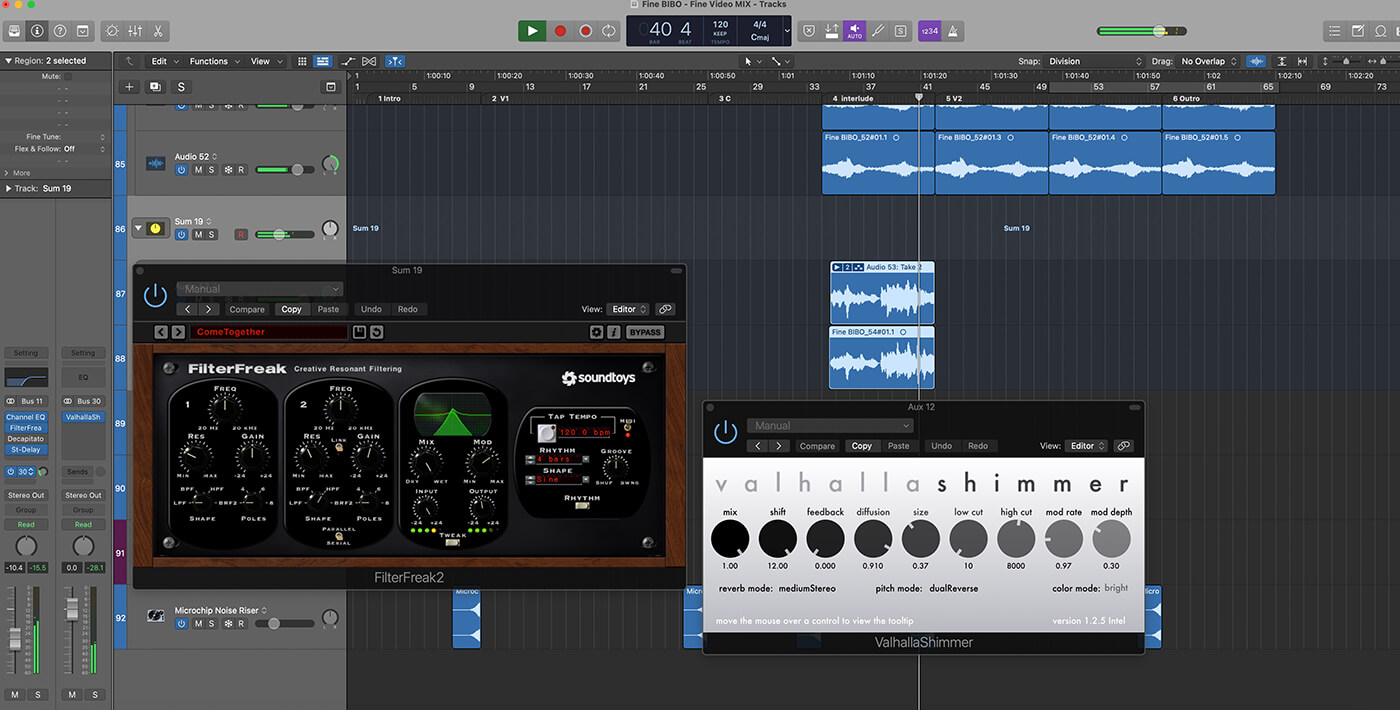 In Fine you can hear a subtle violin, and on Breathe Out, you can hear shimmering piano keys. Do you use plug-ins to pull in lots of different faux instruments?

The way I first got into producing was through studio engineering, and so my biggest production pet peeve is faux instruments.

My main instrument is a five-string violin, so I recorded all the strings on the EP. The shimmering part on Fine is my favourite string part on the album, so I’m glad you noticed that!

The piano on Breathe Out was being played rather than programmed – same with the guitar, bass, and drums. You can hear the subtle touches of the player behind it, which I love. Later in the mixing process, I added a ton of tape emulation to the piano, slammed the compressor on the room mic (a cool natural reverb effect), and added in the high end of a different piano take captured through the drum overhead mics. It sounds crazy in theory, but the effect puts you in a definitive space and the full spectrum range is used up.

Soothe2 by Oeksound. It’s absolutely worth it and works wonders on drums, vocals, instrument busses, and the master. I use it on everything and it’s perfect every time.

I always do mastering in a separate session after the mix and it consists of two plug-ins – iZotope Ozone Advanced, where I start from scratch and do all the mastering in there, and then Soothe2 by Oeksound to give it one last little polish. Keeping the master simple and trusting the mixing process has made things much less complicated for me.

Which plug-ins would the album not be complete without?

Fresh Air by Slate Digital. It’s on every vocal and violin track, and even some drum and synth tracks. 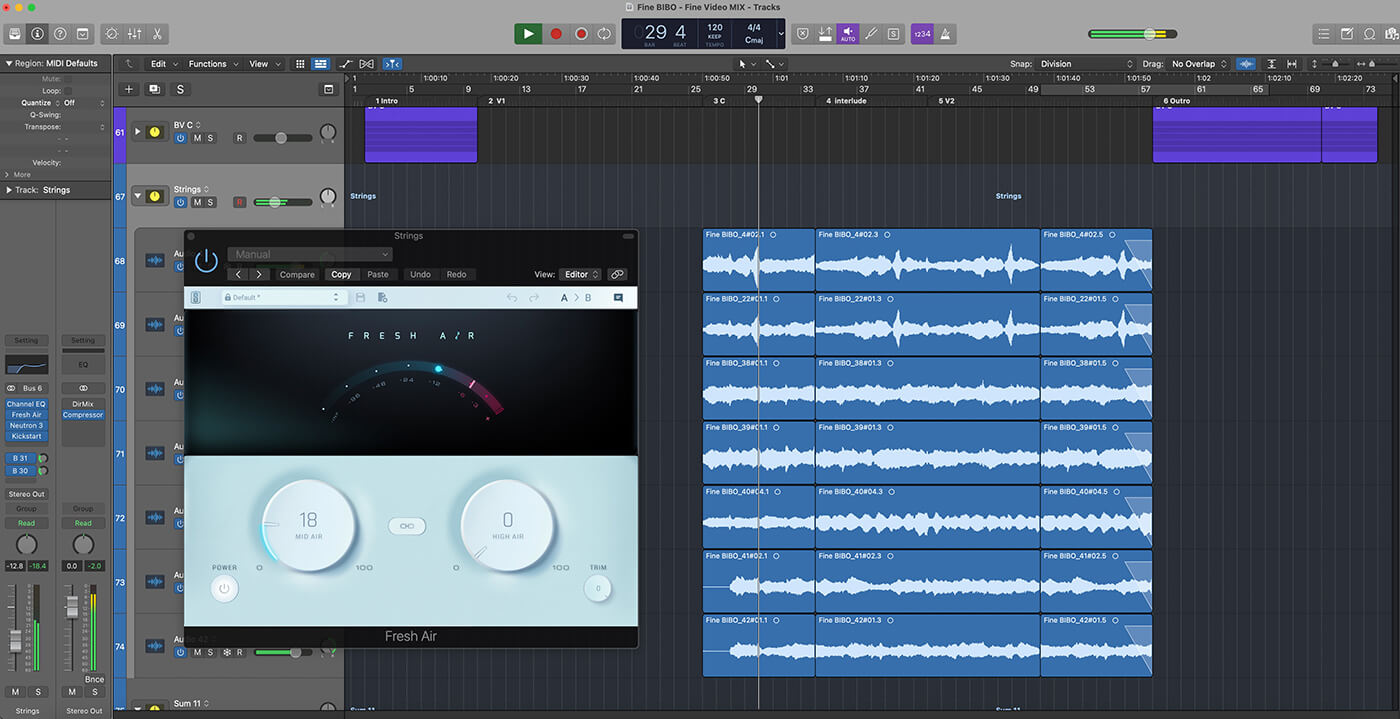 I use Valhalla Shimmer as a subtle reverb sometimes, and other times I use it in the sound design process. It’s used throughout the album and helps create some interesting textures, especially in the string and synth tracks.

Soundtoys Filter Freak 2 is the secret sauce on synth and violin swells. I use it to get a sound that evolves over time – you can hear it used in the violin bridge in Fine. It changes the whole sound dramatically.

I also use iZotope’s Vocal Synth a lot, usually to give some thickness or additional formant love to the background vocal stack.