Pete Tong-endorsed producer Dom Dolla’s breakout hit Take It announced a new dance-music star in the making. Here, he tells us more about his process and his studio work. 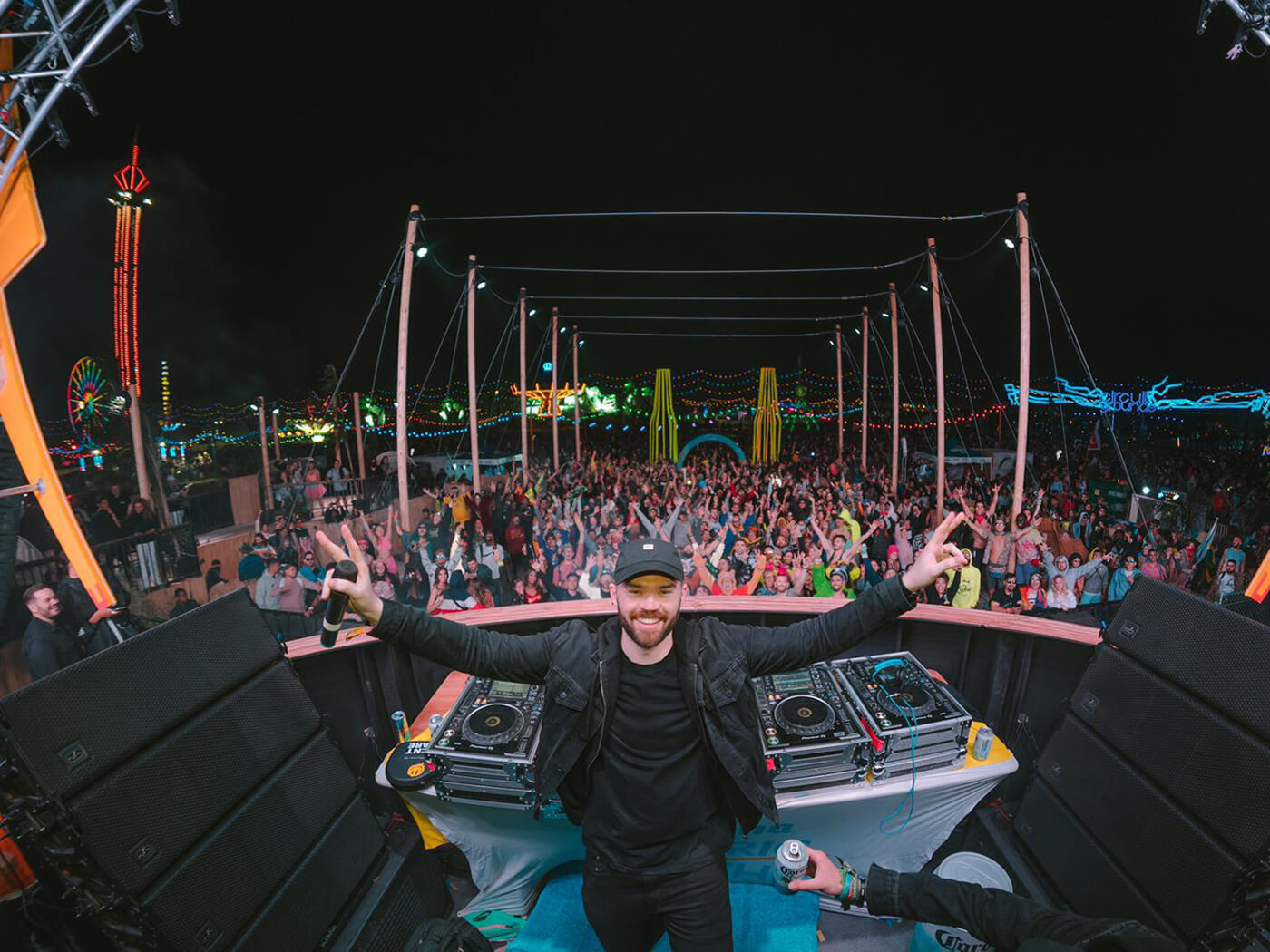 Tipped by Pete Tong as one of the rising stars of 2019, Dom Dolla is known for his groovy bass-driven sounds and his smash, Take It making Beatport No. 1 and achieving over 22 million streams. With support swelling from the biggest names in dance music, we caught up with Dom ahead of his first US and European tours to talk about his journey so far, his influences and favourite studio tools…

Tell us about how you got your start in music: what were your first instruments/studio tools?

I played guitar and saxophone as a youngster growing up, but had no real interest in pursuing music until my final years of high school. I was pretty deep into the 2007-2009 ‘bloghaus’ era of dance music that was online and I was more obsessed with building an epic collection of music to play at house parties than I was interested in school. Soon enough, that transitioned to a friend giving me a dodgy version of Ableton Live 7 to get creative with. Sonically, my first records were as awful – sound design and mixing wise – as you can imagine. But the musical ideas weren’t too bad. Since then, it’s just been about building my production skills to complement my creative ideas.

Anything you discovered about yourself or lessons you would pass on to others during this time?

Yes. Don’t be afraid to ask questions when starting out. Put all pride aside and ask someone who has the skills to point you in the right direction when you get stuck. Although these days, it’s much easier to teach yourself production without any assistance other than YouTube. There are so many amazing online schools and tools available, get stuck in. It’s really about motivation and drive before anything else, if there’s a will there’s a way! 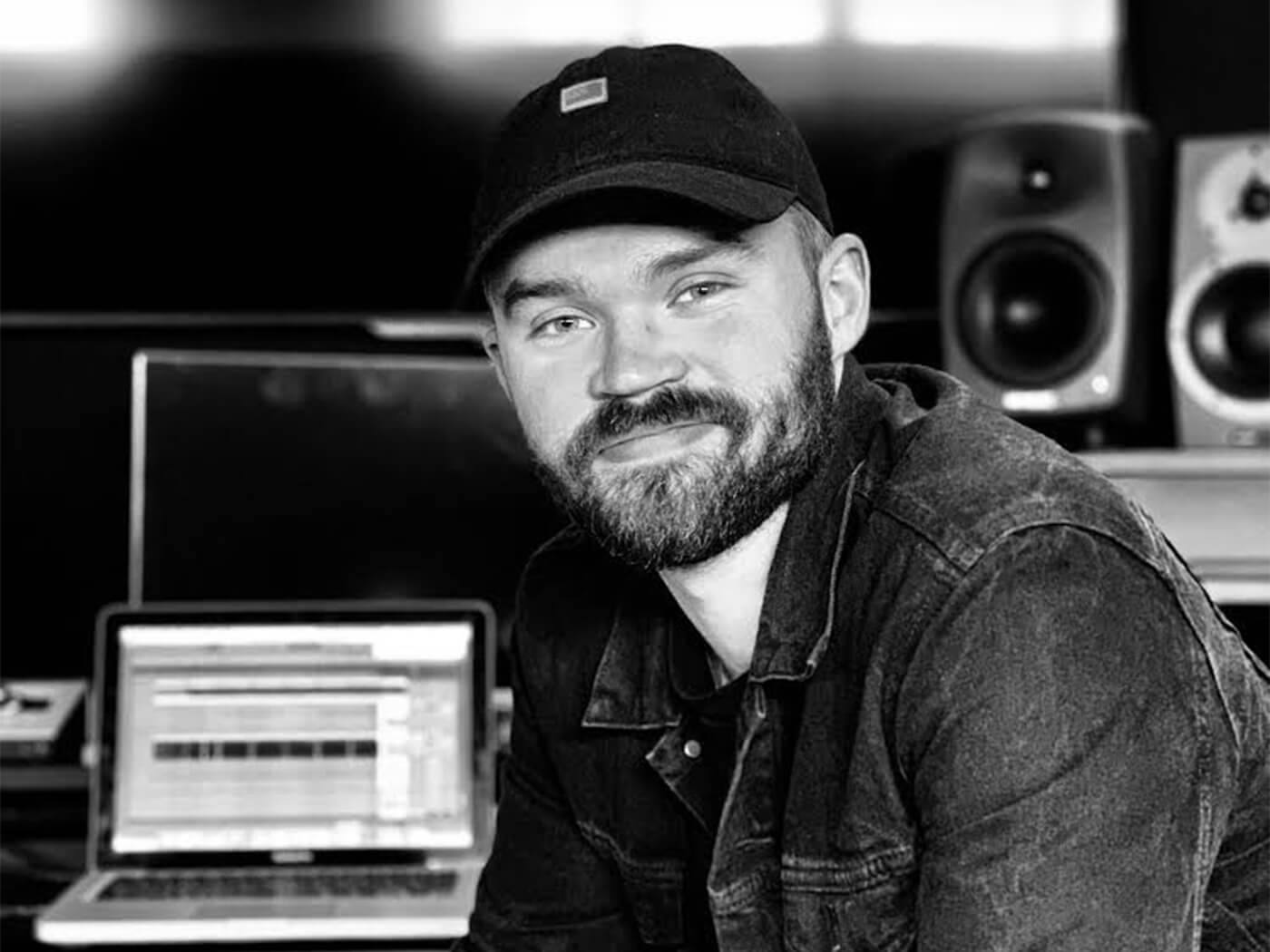 What was the scene like where you grew up and what were your early influences?

I moved to Melbourne Australia from Darwin NT aged 16. My new friends at school gave me my first introduction to dance music. On the weekends, I would sneak into clubs to see my favourite acts at the time. Guys like Classixx and DJ Mehdi would roll through town and play such crazy shows. Melbourne’s got one of the healthiest music scenes I’ve seen anywhere in the world, from locals, developing acts to international touring artists. The scene is strong. Still, most of my early influences came from me trawling the depths of the internet.

To be honest, with all of this touring, I’ve been getting rid of gear and trying to produce as ‘in the box’ as I possibly can. The last five or six remixes or originals I’ve released were literally written on the couch or hotel bed. It’s taken me years to get my aural-perception skills up to the point where I can trust that what I’m doing isn’t a muddy mess on headphones. But one of the benefits of touring is I’m able to test the records out in the club, as well as friends’ studios in various cities, before I send them off to the label.

What about headphone choices, monitoring and plug-ins?

In terms of headphones, I switch between my Bose QC35s, Sennheiser HD 25s and Audio-Technica ATH-M50xs, sometimes my Apple earbuds, too. At home, I use Fostex PM-series monitors when I’m at home, everything runs through Ableton Live on my MacBook. Super-simple stuff. When it comes to plug-ins, I love mastering a particular plug-in before I move onto the next bit of equipment, for me, it’s the ‘chef’ that’s cooking rather than the kitchen they’re working in. You don’t need an enormous collection of gear to get amazing things done. 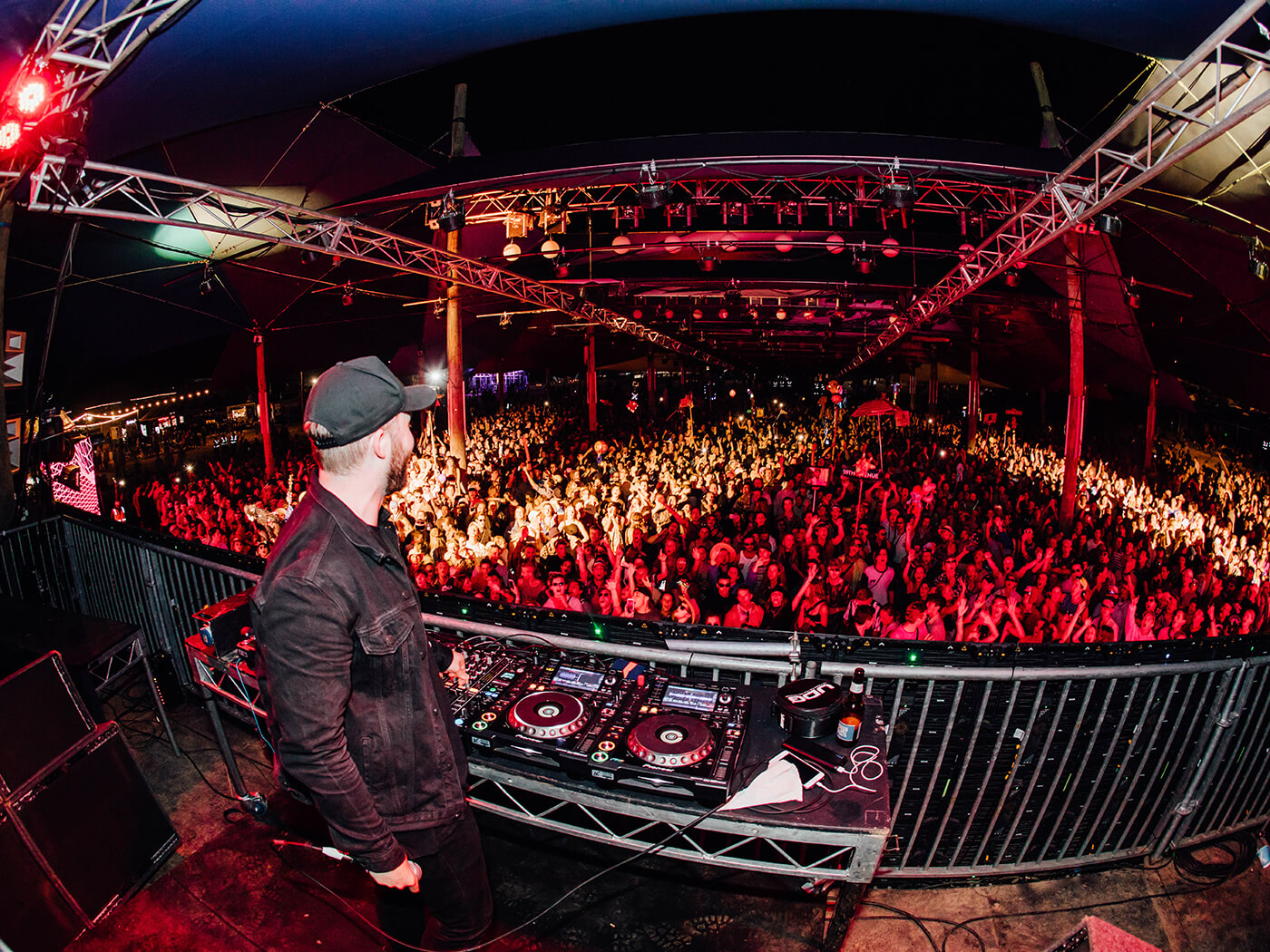 Let’s talk about bass! Any tips for others looking to create slamming basslines?

Most of my bass sounds are designed in Xfer Serum or NI’s Massive. I use wavetable synthesis within those guys to make the sounds I’m designing a little more interesting, note by note. Sometimes, I’ll use an EQ and automate some resonant frequencies and have the sounds evolve as the bassline progresses. Quite often, I’ll have two channels playing the same bassline, one focused on sub frequencies and the other on the top-end grit or tone. It gives me overall more control when it comes to the end result. Finally, I’ll spend some time getting the bassline melody as tight as I possibly can.

What was the point when you knew you had a special track on your hands? Tell us about the process of going pro…

I was balancing my job as a freelance graphic designer/typographer and DJ’ing for a few years, but I probably went full-time in music like six or so years ago. My manager basically sat me down and said: “You’re good, but if you made this your sole focus, you could be great,” and that was enough for me! It allowed me to concentrate on music and music only. Some songs began to take off online and I started touring interstate. Two years later, I had my first international show in the States. It’s just been a steady growth from there.

Do you feel like you’ve ‘made it’ yet, does that feeling ever happen, if not? Do you have some goals with your career? Some dreams to fulfil?

I get asked this quite often and to be honest, I’m not sure… a dream that remains a constant for me is to write music that people connect with and want to hear again and again and again. Nothing makes me happier than the feedback I get after writing one of those. For me, my creative process is in developing the hooks or the ‘addictive’ elements within a track. As for ‘making it’, hearing my songs on TV commercials and having my mum text me about it is definitely a great feeling!

When was the last time music made you cry?

Oh, gee, that’s a tough one, possibly listening to 1988 by Youandewan earlier this year. That song is a real journey for me, with a lot of memories attached to it. Have a listen to it… 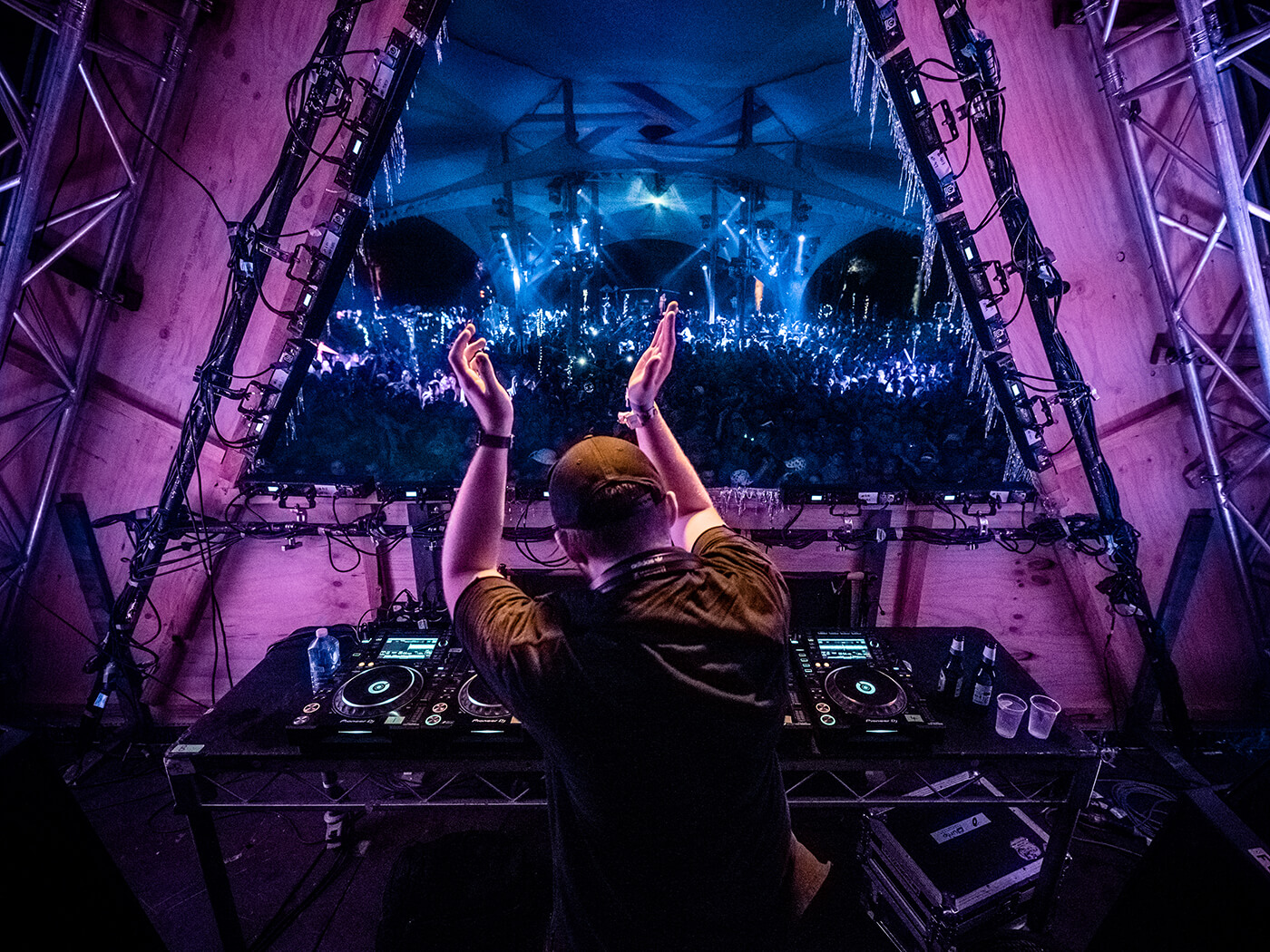 Who do you think is producing killer tracks right now – who produces really slick mixes from the studio?

Kyle Watson and the Walker & Royce lads, irrespective of what’s in vogue at any given moment… they are definitely some of the most talented people working in dance music right now. They’ve truly mastered their trade as sound designers and mixers, creatively they both absolutely churn out the ideas, too. Great ears, so I have to say, well done, fellas!

What’s coming up for you over the summer and for the rest of the year and where can people find out more?

This year I’m super excited to be giving the festival season a real crack in the US playing Electric Zoo and Hard Summer before heading over to Brazil. Then there’s my first run of European shows playing The Egg, London, Hideout, Croatia, Tomorrowland Belgium along with Greece, Netherlands and my first Ibiza shows are coming up. Then I head home to Australia for Listen Out nationally. I’m pretty damn excited. In terms of keeping track, I’m always posting updated tour posters on Facebook and Instagram. Follow me there and I’ll do my best not to bombard you all!

Check out the music video for Take It below: