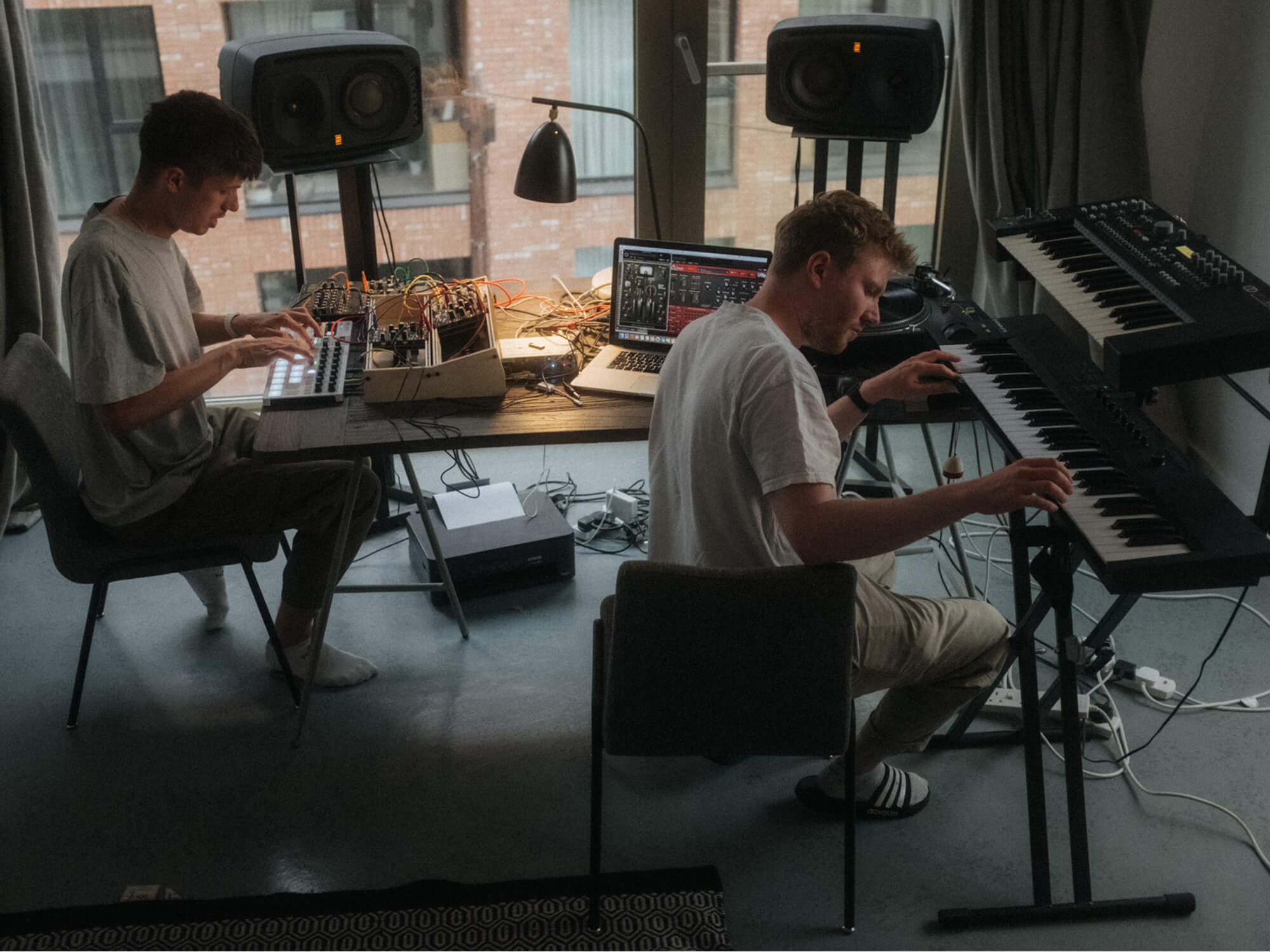 “We weren’t trying to finish tracks. We were just having fun.”

In 2020, two London-based producers, O’Flynn and Frazer Ray, respectively in the throws of post-album writer’s blocks and the COVID-19 pandemic, meet. They’ve been sending music back and forth for a year and O’Flynn, real name Ben, is keen to release Frazer’s music on his own record label, Hundred Flowers.

They drink a few socially-distanced pints. O’Flynn compliments Frazer on his recent Worldwide FM show, enquiring about a particular speed garage track he played. Later, Frazer educates O’Flynn on the genre. Inspired and potentially a little inebriated, they agree to make a few tunes together to stop the rot of writer’s block.

It’s 2022 and the two have smashed through their creative slump. They’ve made not just one or two tracks together as planned, but a whole album; it’s called Shimmer and is probably one of the most unexpected electronic releases of the year. The rich body of work “doesn’t sit in a lane”, they say, and drives through broken garage flexes, “emotional techno”, 150 bpm jungle-esque breaks and a poignant four-on-the-floor skittish sound that echoes artists like Four Tet, Floating Points and Two Shell.

They’ve learnt from one another as musicians, combined processes, styles and sounds, and have even decided to craft a live stage show.

Speaking from Ben’s flat, the two producers, now not too far off a bickering Simon and Garfunkel, talk us through the sleeping arrangements.

“Yeah, I’ve been sleeping on Ben’s floor for most of this – especially the live show prep,” Frazer starts.

Ben cuts in, red-faced: “He says ‘floor’. We lay out the sofa cushions and it has bed sheets and a duvet. He’s not sleeping on the floor! It’s a nice layout.”

Bedding defended, Ben remarks on how their production sessions evolved from a few tracks to a full-length album. Their differing production styles clashed at first. Ben was aghast at the thought of Frazer’s initial production setup, which comprised merely a broken laptop and in-ear apple headphones.

“Frazer was the opposite of me,” he says. “You just sit on the sofa with your shitty headphones,” he says to his fellow producer with a chuckle. “I was doing stuff with a bit more outboard gear. I prefer speakers, you know…sitting at a desk.”

The “gamechanger” lesson was learning how to use one another’s DAWs (O’Flynn on Logic Pro and Frazer Ray on Ableton Live). But Frazer learned a few tricks about Ben’s “dome-y, broader” EQing techniques and beat-making, for example, while Ben praises Frazer’s knack for hooks, vocals, phrases and technicality.

In terms of musical styles, O’Flynn can frame anything from rave breaks to disco beats around samples of rare records from forgotten corners of record shops. He’ll then create emotion through brooding basslines, “textural” melodies and euphoric pads. The more UK rave-leaning Frazer, on the other hand, makes “functional club music”, as he describes, knowing when to add in that ravey siren or gun finger-raising bassline.

Clearly, the two’s individual sounds weren’t fully aligned before embarking on the Shimmer project, so they carved out their own.

“It gave us a lot more freedom to work in different ways,” Frazer tells his production partner. “I think your music’s always been a lot more melodic. It suddenly made me feel comfortable working with more chords and melodies.”

“Frazer’s great at cutting vocals,” Ben adds, “which is hugely important for getting anyone to listen to your music these days. Everything needs a hook.

“If I had another clone of me who works in the exact same way, it wouldn’t have been as inspiring,” he says. “The reality is this album can’t exist with just me and it can’t exist with just Frazer. Neither one of us could have made this individually at all. This only exists because we have spent that time together.”

So, how did they work together and how did their process lend itself to laying down so many ideas so quickly?

“Instead of trying to collaborate,” Frazer explains, “we just started playing to our own strengths.” Ben explains how they would often set a conceptual basis for a track and capture its feeling, and then work on different elements of the same track in different rooms. “Weirdly, it just worked,” he says. “Before we knew it, we had three or four really good ideas. After that, I was like ‘I reckon we should do an album’.”

“We were both enjoying working as well – like actually making music,” adds Frazer. “We were absolutely churning through it.”

“We weren’t trying to finish tracks. We were just having fun.”

In the mixdown stage of the album-making process, however the fun times were challenged by poor Zoom connections during remote sessions. There was also a near-disastrous laptop malfunction the day before handing the album over to be mastered, which resulted in Ben waking up in cold sweats in the middle of the night.

There were, however, special moments while making the album, Frazer recalls, like when granular synthesis became the icing on the cake for Love Fading or when singers Byulah and Ekhe recorded the vocals for Rosetta in one, perfect take. The sub-bass in Colfax, Ben remembers, was a ‘wow’ moment created after playing around with Soundtoys’ Tremalotor and FilterFreak plugins.

They also mention one of the rare moments when they jammed over the top of one another on the track Tando. While O’Flynn improvised bass riffs on a MIDI keyboard, Frazer jammed out on Ableton Live’s Wavetable synth to create “blippy” sounds. Out of that five-minute jam, there was a seven-second snippet that “popped”. They extracted this and it became the focus of the whole track. Although it’s not got a big vocal or a weighty drop, Ben says, it’s one of his favourite tracks on the album because of that moment.

When it comes to gear, Ben, who has been building his outboard gear collection since he last spoke to MusicTech in 2019, is quick to praise the Make Noise Strega modular unit that features on Holsten. They also made use of Dave Smith’s OB-6 and Prophet-6, Elektron Analog Keys, Elektron Rytm, the Elektron Octatrack, and the Moog DFAM for sampling.

While many would’ve been happy to send off the pre-masters and call it a day, O’Flynn and Frazer Ray decided to take the Shimmer project one step further with a fully-fledged live show. Set to debut at Evolutionary Arts Hackney (EartH), London, on 28th October, this hour and half-long show doesn’t just showcase the album but weaves in both artists’ back catalogues. It even features a track that took four months to make that didn’t make it onto the album.

O’Flynn meanwhile predicts that live shows are where the industry is heading. “Right now, DJs are super highly-paid and everyone’s excited to see DJs. But back in the early noughties, people would go see bands, and not so much in clubs. I can see that happening again.” He might be on to something. Bicep, Overmono, Kelly Lee Owens, Bonobo, Disclosure, Elkka, Floating Points all have a live show up their sleeve. The two agree that in 10 years’ time, they want to be in the same position.

While diving head-first into a collaborative album might not have looked like the wisest career move on the surface, they say, Shimmer allowed them to each adopt a new approach to making music. Now, with a refreshed perspective, they can make music separately again and apply their new skills.

It was also, ultimately, a passion project. “It was for the music,” Frazer says. “I think we were just enjoying what we created so much and felt like that needed to be shared.”

“We did this because we enjoyed doing it,” Ben interjects. “It didn’t reach further than that until a record label signed it at the end. But the music was all done before it got signed. It was a labour of love.”

Shimmer, the new album by O’Flynn and Frazer Ray is released on Ninja Tune on 21 October. Buy or stream on their Bandcamp.