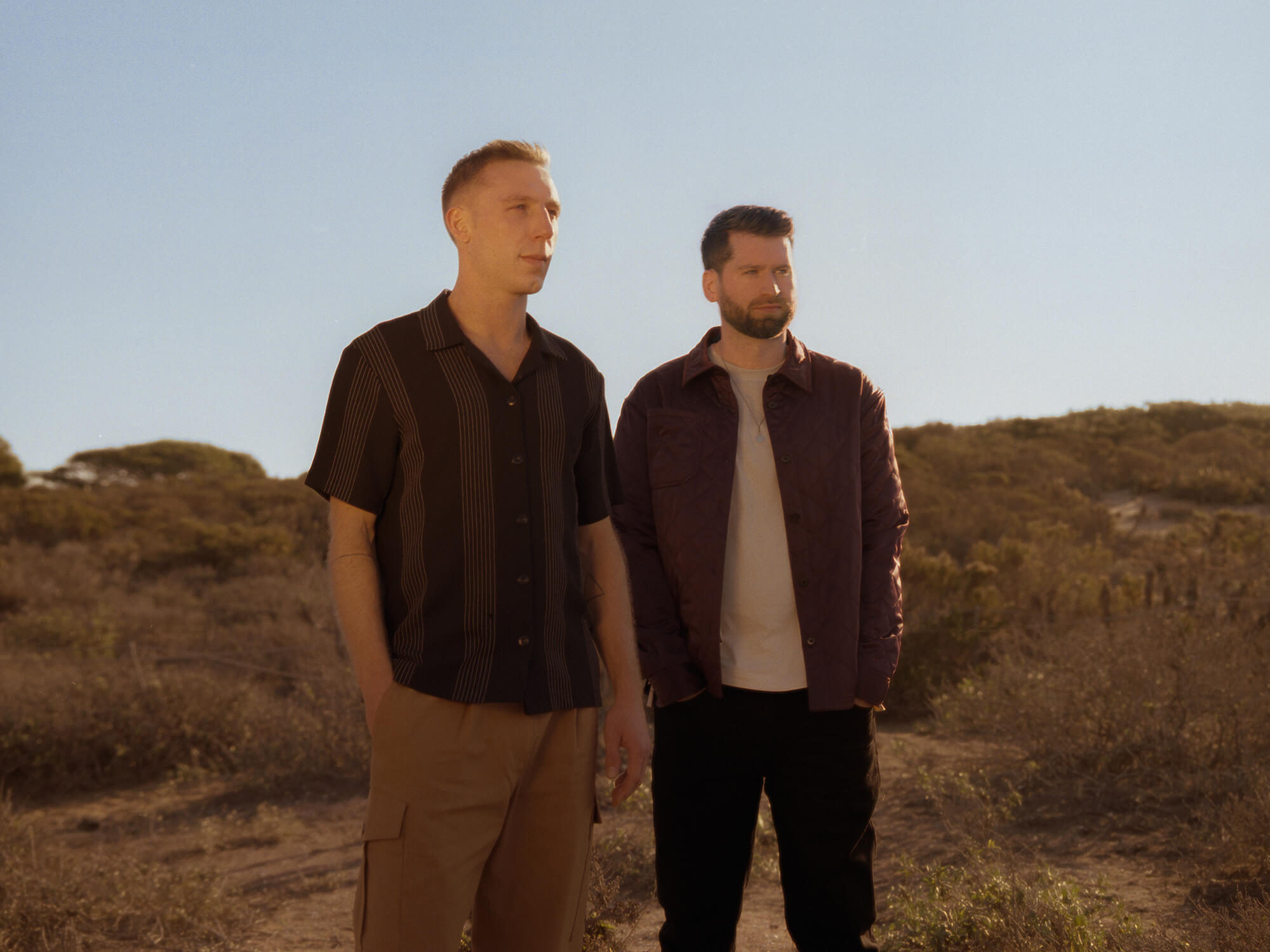 Odesza: “We get frustrated when songs don’t happen quickly but you need to invest time – it won’t happen overnight”

Grammy-nominated electronic superstars Odesza have created one of the most hotly anticipated records of this sizzling summer with their new album, The Last Goodbye. We learn how they’ve done it.

“It’s easy to get put off from your path if you feel you’re making music that doesn’t quite fit or can’t be marketed. But not fitting in can be a great thing,” says Harrison Mills of globe-trotting electronic group Odesza.

It’s an approach that has held Harrison and his musical accomplice Clayton Knight in great stead. With new album The Last Goodbye due imminently, the pair’s musical journey to the upper echelons of the Billboard charts and main stage of Coachella is testament to their bold vision and passion for blending different sonic ingredients.

From their 2012 debut Summer’s Gone to the Grammy nods for Say My Name (RAC mix) via the launch of their Foreign Family Collective, their creative mojo has never been compromised. Odesza’s new record, The Last Goodbye, is another glorious chapter in their story with lead single and title track sampling Bettye LaVette proving a highlight. Elsewhere on the ambitious record, the likes of Izzy Bizu and Lapsley collaborate while their live show incorporates visuals, technology and reworked versions of their tracks. Restless creativity is a fundamental part of them.

“People want personality and stylistic differences in music,” Harrison says. “On starting out, artists might get put down for it – you don’t sound like someone else or how someone thinks you should – but ignore them. You might be doing something really unique and carving out your own niche.”

Harrison and Clayton met at college in Bellingham, Washington via a mutual friend who knew the pair were exploring similar music and styles. Inspired as much by the harmonies of The Beach Boys as the esoteric and off kilter rhythms of Animal Collective, Bonobo and Four Tet, they immediately hit it off.

“We went to this school that was focused on singer songwriters and rock bands,” says Harrison. “So there was an instant connection when we met as we loved many of the same artists and influences.”

The pair began sharing inspirations, had a jam session, then were inspired to remix some tracks by The Beach Boys and combine their creativity. 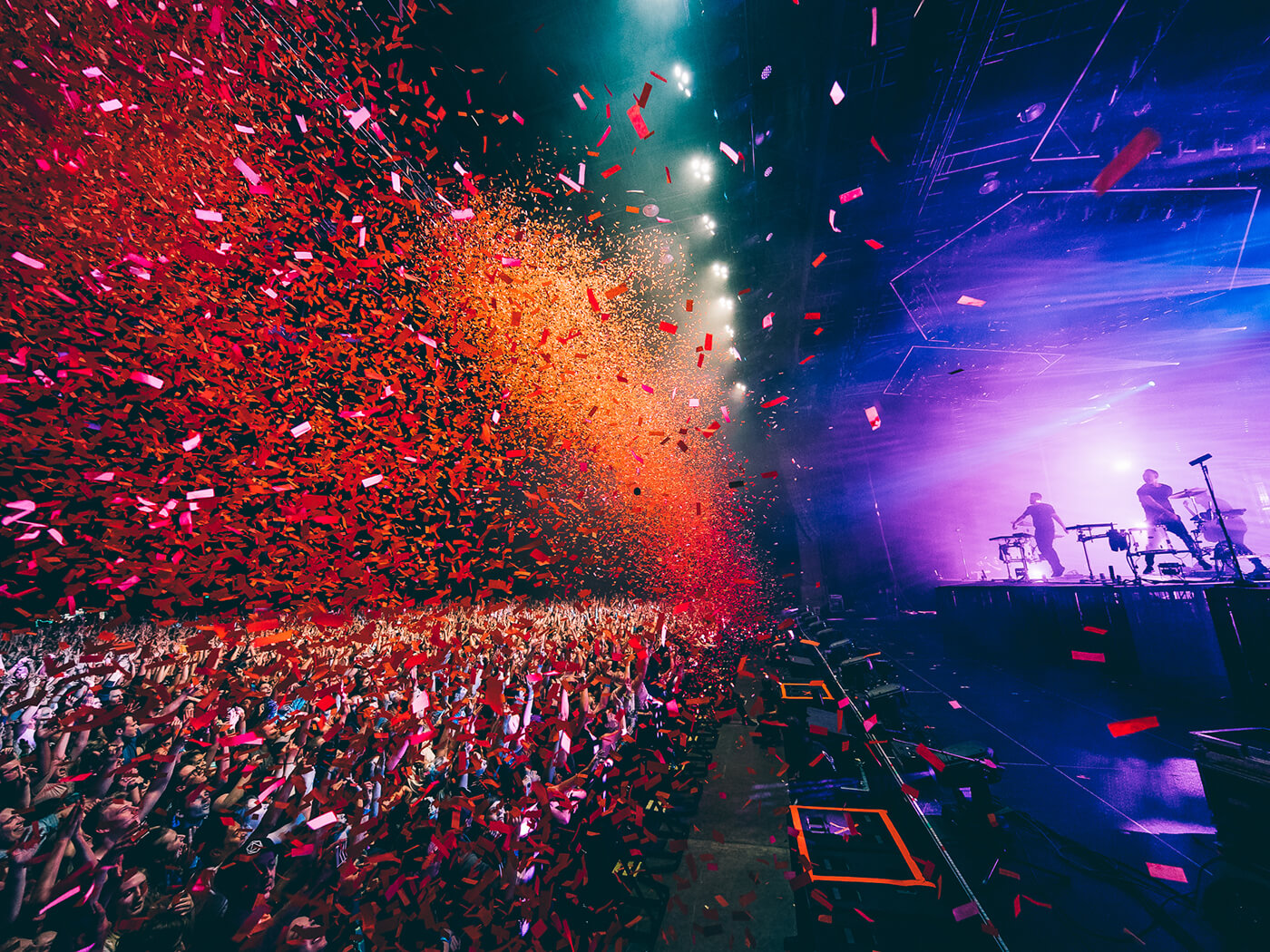 “Each of us would take a couple of tracks and attack them in different ways,” says Clayton. “After working together, we wrote a bunch of songs really quickly and started connecting our machines and jamming. One person would be on the drums, then someone else on the chords and playing samples. Much of our debut Summer’s Gone emerged out of that time.”

From the beginning, Odesza have adopted what they describe as a “hip-hop approach” to chopping up sounds in the world of house music and 4/4 beats. It’s a novel way of working that has helped them stand out and define their sound.

“There was this initial spark that felt as if our styles complemented each other,” says Harrison. “But we weren’t sure what we were making and there was a lot of confusion. No one could work out our genre – which was and continues to be really exciting for us.”

Alongside Wide Awake, and This Version of You, another jewel in the crown of their fifth record is title track The Last Goodbye. The song is constructed around the soulful brilliance of Bettye Lavette track Let Me Down Easy.

“We’re always digging for new tunes,” Harrison explains on how they unearthed the song. “We’ll always come up with selections of tracks we’re into and share them with each other. We found it at this point when we had this instrumental that had potential but couldn’t quite work out to glue the song together.”

It was while listening to Bettye’s voice and their own half-finished piece of music that they realised both were in the same key.

“As soon as we found they worked perfectly over each other, we restructured the entire song around Bettye’s voice,” continues Harrison. “That sometimes happens. When we use a sample more and chop it up less, we fall in love with the song and try to avoid changing it too much. Instead, we want to find a way to bring it up-to-date and into our era.”

This latest record came after an extensive period of touring for their 2017 record A Moment Apart. During this time on the road, they worked on various demos and sketches before COVID-19 derailed their live jaunts. The pair subsequently retreated to their studios to immerse themselves in the writing process. 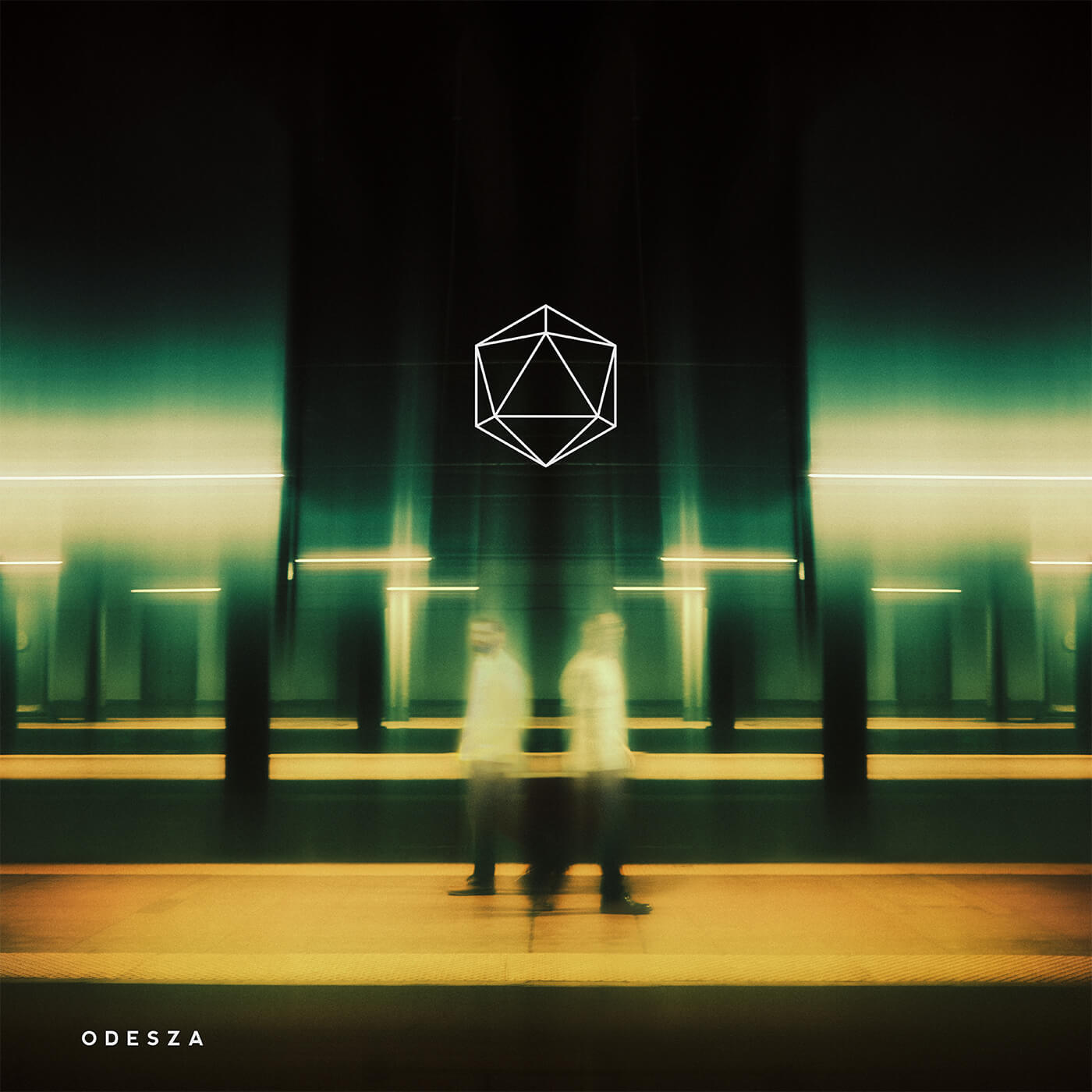 “There’s never an exact goal, a lot of it is about throwing as much at the wall as possible and seeing what sticks,” laughs Clayton of their process. “It took us a while to get our chops back as there were a lot of demos that weren’t doing it. We had a couple of breakthrough moments and, from these anchors, we could see the sound forming.”

These epiphanies were connected to Odesza’s sonics rather than any themes. It’s often only when the lyrical content and collaborators come on board that the concepts swirling around their music become clear.

“It’s all about deciphering what you’ve made,” adds Harrison. “Music can feel unconscious and based on feeling. You have to decode what you’ve done and why you were attracted to a particular sound – and from there, the themes start to form.”

The pair both live close to their Foreign Family Collective studio. In this space, Clayton and Harrison usually meet up every other day to discuss their different ideas.

“Sometimes, it’s about trying to impress the other person,” laughs Harrison. “We’ve known each other for so long that we’re well aware of our tastes. So trying to convince the other that they like something that you love is a fun game we end up playing.”

Their creative process is one coloured by Universal Audio UAD and Soundtoys plug-ins alongside a smorgasbord of outboard gear including an Sequential OB-6, Novation Peak, Korg Minilogue and Deckard’s Dream Mk 2, which underpins the new LP. Odesza’s initial writing usually takes place on one instrument then, after the melodies and structure have been figured out, the track is amplified with more synths for colour and depth.

“Our synths have a lot of character,” Harrison says. “Because of that, it’s way harder to add them to a more polished song as they often stand out so much. Usually, if we get something new that has a real stylistic vibe, we’ll wait until we have a new song to start off.”

“The OB-6 is a lot easier to just throw onto a track as it is so warm it can blend in with different things,” he continues. “With the Deckard’s Dream, the song has to be built around the synth itself as it takes up so much focus.” 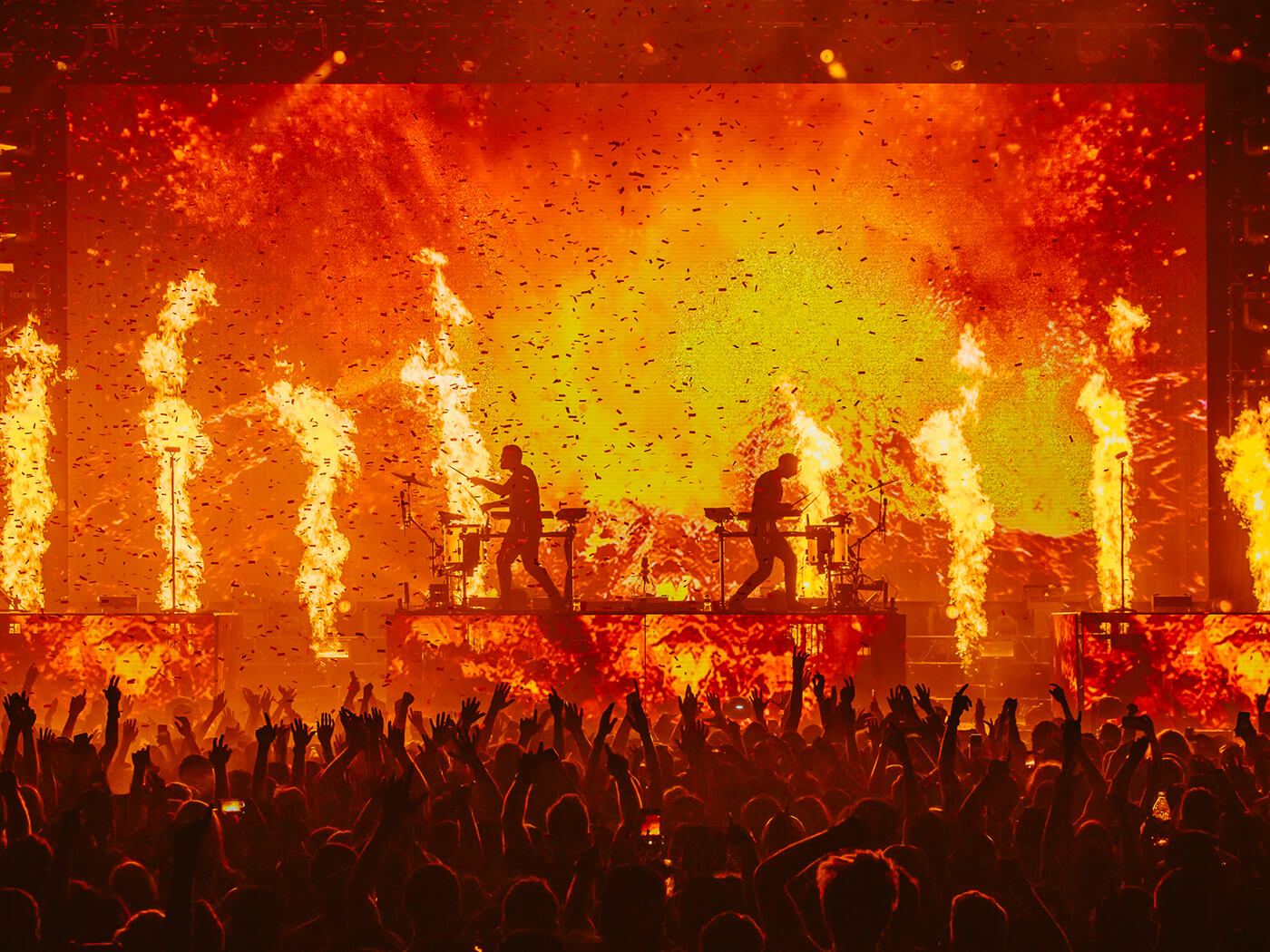 While this record features The Knocks, MARO and Ólafur Arnalds among many others, previous collaborations have seen Odesza work with the likes of Little Dragon and Leon Bridges. Every relationship evolves in different ways, perhaps through chance meetings on tour or via rogue emails they throw out into the universe. Part of the appeal for Clayton and Harrison is trying to track down artists who they find inspiring.

“Each one is different but we’ve found that those who are most willing to try new things are the most exciting to work with,” Harrison says. “We want to make something true with people we respect – that’s the most fun for us.”

Clayton continues, “we love to give our collaborators plenty of room to work. We usually send them a selection of demos and let them come up with melodies or top lines, then build from there. We never send anything too polished or finished. We want to give them enough space to find their place in a song.”

It was two of these tracks – the title song and Light of Day with Ólafur Arnalds – that helped set the tone for the record.

“Those two were serious tent poles for us on this record and how we knew where to take it,” says Harrison. “Without it, the sonic soundscape would have been very different.”

With so many records and tour miles under their name, these dance music heavyweights are unsurprisingly itching to get back out on the road. A forthcoming tour will see them taking in a number of arenas and amphitheatres, a musical setting one step removed from their studio recordings.

“I’m sure it seeps into our writing,” says Clay, “although we do try to keep them slightly separate. This album is dancefloor in some ways but also designed to be played with headphones to enable the listener to lose themselves in it.”

Four years have passed since their last album but both are keen to underline how the songwriting muscle is one that needs to be flexed whenever possible. For aspiring producers, their advice is all about hard work.