With their European tour halted, the eclectic Texas duo reflects on making their latest record and how musicians need to adapt to prosper. 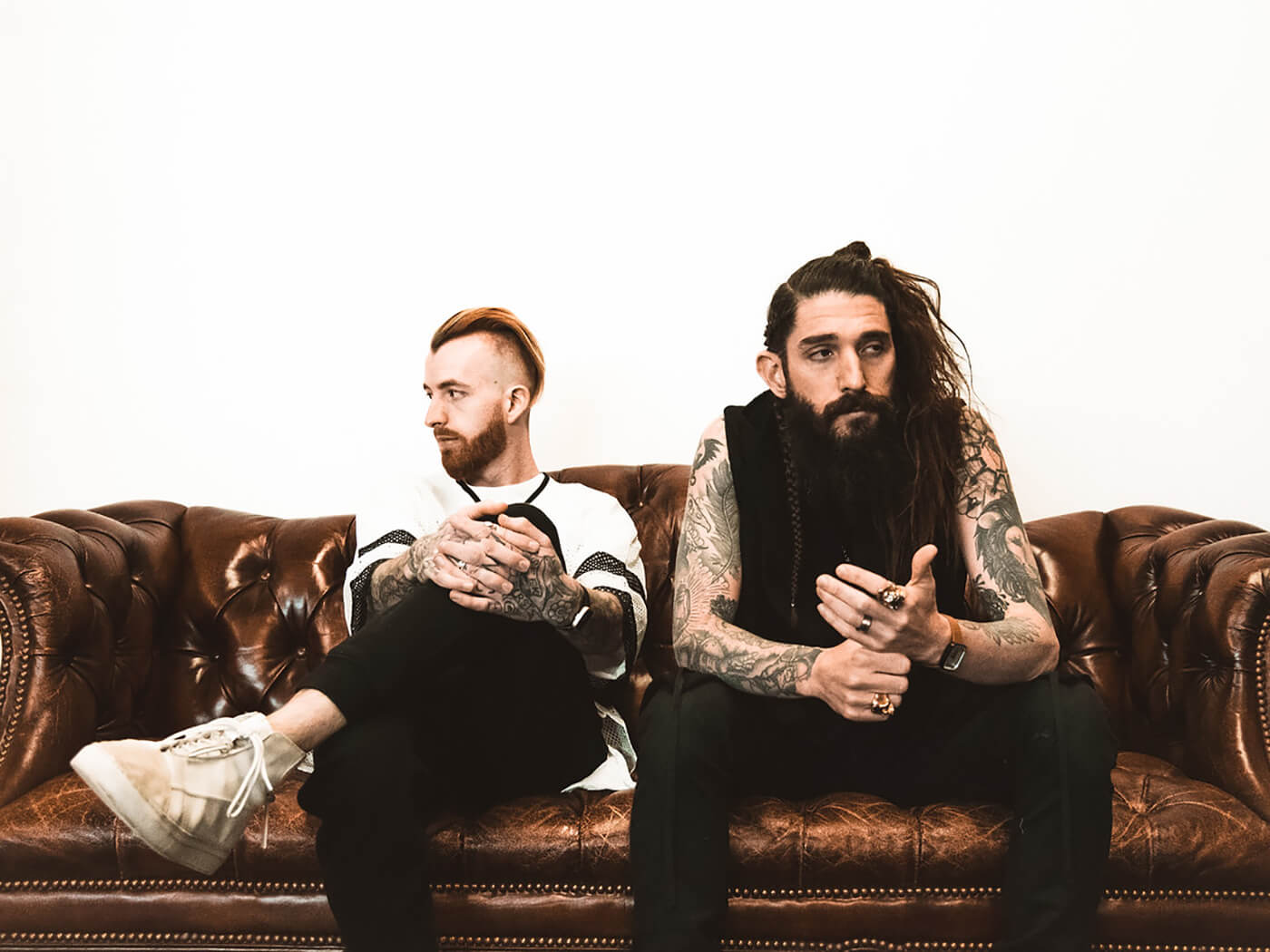 The pair’s success is no surprise to anyone who knows them. Songwriter/vocalist Matthew Brue and musical wunderkind David Butler have put in a mammoth effort. “Matthew and I have both learned some tough music business lessons.” David tells us, “Artists need to be in control of their own stuff. I think owning your work and locking down what you want to do as an artist is important. Success in the 21st century is now linked to social media, so if you’re willing to build and engage with your audience, you’ll have a good grounding. Matthew and I have educated ourselves a lot on those things. We’re also self-managed now. We own it all.”

Last year’s Covid-19 lockdown presented an abrupt roadblock for the duo, who were touring Europe when the call came for them to return home. They recollect that they raced to return on the final day before the US introduced travel restrictions. “Since then, we’ve been back here in Texas regrouping creatively,” says David.

The duo’s third record, Can You Feel The Sun, came out in October 2020, briskly following preceding album The Darker the Weather/The Better The Man. The pair produced it with Missio’s established producer Dwight A. Baker at Texas’s Matchbox Studios. We wonder how the three breakdown respective responsibilities in the studio.

“A lot of the time, we’ll come in with a bunch of demos,” Matthew explains, “We often have fifty per cent of things done, minus vocals or things like that. The rest comes from live tracking in the studio, and new things are sometimes born from scratch. We’ve been working with Dwight since the very beginning of Missio. I love the fact that we have such a good relationship; he is someone who will just tell you how it is and give you the bottom line.”

For Matthew, Dwight’s forceful presence is productive “I need that slightly more aggressive personality that can push me to do things I might not want to. He plays that role of the older brother and has so much experience under his belt.”

David seconds Matthew’s praise, “Dwight knows how we think about music; it’s like a well-oiled machine when we’re in there. Things don’t even need to be said by this point. We know who’s doing what. Dwight might come in early, and then we’ll come in later in the morning. Dwight will bail by midday, and Matt and I have creative time. We usually leave him a big pile of mess – or a brand new song – to work on the next day.”

A particular creative strength of the partnership is how they work on each song in isolation, providing uniquely tailored textures and instrumental flavours for each track, all without submitting to notions of album consistency or genre-labelling. This culminates in the album’s ten diverse songs – though the listening experience is still, miraculously, cohesive.

Their instrumental range is broad, from the sprinkling of acoustic guitar and piano on the title track, the ethereal choirs on the magisterial We All Burn To The Ground and the gnarly synth textures of Vagabond.

“A lot of electronic music can sound like it’s been made with a lab coat on. It’s so overly programmed,” David states, “So much of our process takes in influences from genres I’m invested in. Distortion and human elements play a big role in our sound broadly. We rarely quantise, so if we’re going to loop, we’ll loop 16 bars. We’re always trying to find a way to perform in a way that adds humanity. We had some clear rules at the beginning, but now we’re letting the songs decide.”

Matthew expounds on the fun of this process, “Every song is its own character – we might have a new drum tone or a new synth tone. We might muddy up our sounds with a new plug-in or random experimentation with effects like delay. The fact that we’re able to approach each song allows us to have more fun. It’s not monotonous. We’re always looking to fuck things up in the studio and find weird, new tones – and then incorporate them into our songs.”

Missio rely on Pro Tools as their sole DAW, conveniently linked up to some sought-after synths for their legendary sonics, “We’ve got a few analogue synths linked up. We’ve got a Moog One and Subsequent 37, Prophet-5 and an OB-6, all MIDI-routed together,” David explains, “They’re all controlled by a simple MIDI controller going into the computer. So at any time, via one keyboard, we can play any VST on the computer and then switch to any of the analogue synths without having to get up. We can mix and blend them with ease. It’s good to get options lined up speedily.”

“We always sing through a Shure SM7, and drum-wise we largely mine from my home-made sample collection,” David continues, “Years of being a pack-rat with sounds has resulted in a massive collection. We also use a fair amount of Universal Audio tech; their stuff adds so much pro sheen to our tracks. I group them into two categories. If I want to hear the analogue LA 2A or 1176 – then I will choose from that pile, but UA has some fantastic colourful stuff too.” David elaborates further, “I love their software RE 201 Space Echo, and their AKG BX 20 spring verb adds real vibe. We use the Ampex ATR-102 tape machine’s flutter and wow, that’s a real part of a sound. It can really mess with the pitch. I use it as like a sort of ridiculous effect that sounds like something has died and decayed for fifty years and is somehow still making noise!”

“We like taking rich sounds that exist in the sample world and then treating them like instruments.” David continues, “I’ll throw them through a delay or I’ll reverse them – if I like a colour that’s happening, we’ll find a way that’s unique to present them. That’s certainly part of the fun in Missio, finding that unique piece. Is it some sound, is it a sample, is it a melody? There’s always an enticing starting point.”

Despite the pair’s bent for discovering new sounds and ways to treat them, David and Matthew have to draw a line in the sand somewhere, “The availability of these kinds of plug-ins are great, but they can also be a big stumbling block. We subscribe to the ‘commit’ button philosophy. We treat plug-ins like we are using the actual gear, and think ‘OK, let’s print that, and we’ll work to that’”

“We’re also big users of Native Instruments, Output and Splice too,” Matthew interjects, “We used Output Portal for the first time when making the album, it was very confusing at first, but once we figured it out, we used it on the track Hoodie Up to glitch and twist the vocal.”

Living in the dark space

With the album’s recent release making waves with their fans, and new listeners, we wonder if the events of 2020, both COVID and the epoch-shifting US presidential race, will feed into their future music.

“We’re a band that’s always trying to do good and impact people positively,” Matthew tells us, “More often than not recently, it seems that a lot of people are thriving in negativity and the chaos of the world right now. I get it. I love living in the dark space a lot of the time – but you have spaces to grow and to move. I think we’re just frustrated at the world.”

Matthew continues, “Over the last four years, I’ve been busting my ass trying to take our career further and build our audience and tour. We were fortunate enough to be able to tick off some boxes on our bucket list. Then, having to take a step back and realise how fleeing things are this year brought home just how much we all have in common. It really doesn’t matter if you have a billion dollars or ten dollars; if you work at a restaurant, retail or whatever, we all have the same end path. When you take that philosophical step back, it’s very humbling. I hope that this message comes through on the record.”

David confirms that the duo are keen to cast off the shackles of lockdown life and return to the live-fold, “We keep putting dates in and then pushing them back – as soon as we can, we want to get out live. It’s a huge part of what Missio do – sharing music in the live arena.”

“We’re always writing new songs, and we’ll try and do some live streams soon, too.” Matthew concludes, “It’s actually been good for us to have some time to really engage with our fanbase for the first time, see what’s working and what’s not and get a better understanding of who our people are. When we get out on tour, we’ll know our audience so much more. I’m hoping we can just speak to more people and give as much of ourselves as we can.”

Missio’s Can You Feel The Sun is available now, keep an eye on missiomusic.com for tour dates.