Michael Gray shares tips for a long-lasting career: “Believe in yourself, even if you get setbacks”

Michael Gray has earnt huge success as a remixer, producer and DJ, both solo and with Jon Pearn as Full Intention. Here, he talks studio technique, influences and the Moog that got away 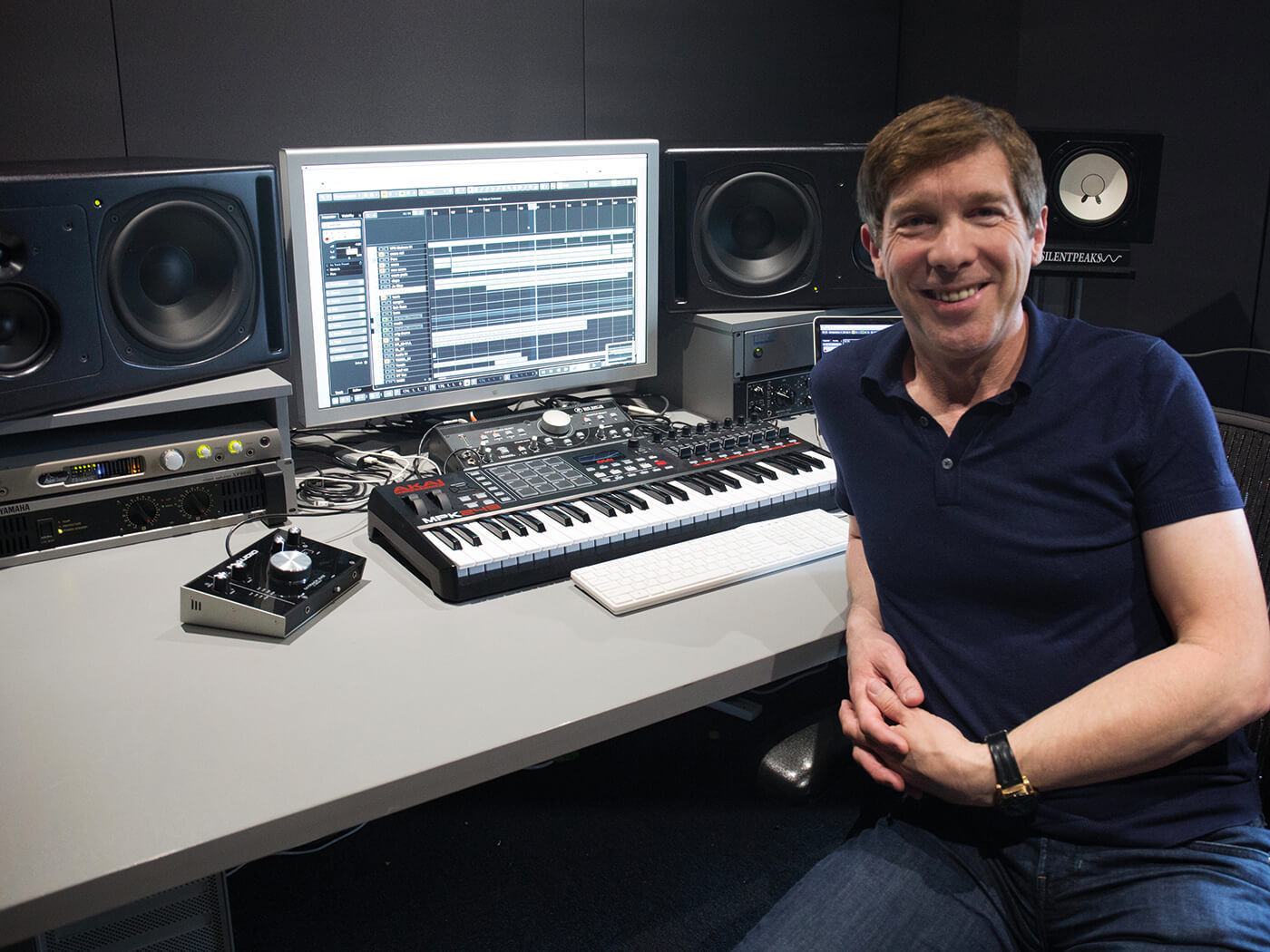 In 2004, beat-driven crossovers with hefty kicks and optimistic, insistent vocal hooks were dominating airwaves all round the world – as exemplified by Eric Prydz’ No. 1 smash Call On Me. In amongst them was The Weekend, the first single from Croydon DJ, producer and remixer Michael Gray – with its catchy Moog lead line and universal chorus, it’s regarded as a seminal classic and returned to the clubs in 2017 with Gray’s Glitterbox Mix that once again dominated the dancefloor. Back in the day, it seemingly came out of nowhere, yet its creator was practically destined to be a renowned DJ…

Born and raised in Croydon in the 1970s, Michael Gray was introduced to music at the age of five through the music emanating from his sisters’ bedrooms. He was utterly enthralled and at the age of 11, started to become keenly interested in the sounds of disco and soul. He soon ventured into the world of DJing, honing his skills every month in a local church hall.

Come the early 1990s and Michael had developed to the point where he was able to launch himself in the UK dance scene, before teaming up with Jon Pearn to form Full Intention. His discography is highly impressive, remixing the likes of Whitney Houston, Mariah Carey, Sugababes, George Michael and J.Lo as well as releasing a range of original material on industry institutions such as FFRR, AM:PM, Atlantic, Defected and Toolroom to name a few.

Was it always a dream of yours to play and make music? And how did your career begin?

I was always crazy about music and knew I wanted to DJ. At the age of 16, I started mixing together records. I sent a tape in to Radio Jackie where Les Adams held a competition to find the best mixes. Luckily, I won and was invited into his studio for the day, which is when I really got the bug to take things further, buying myself a second-hand two-track ¼-inch tape machine where I went on to learn how to edit and splice tape and get all the crazy effects that we now take for granted in software. Les also introduced me to DMC (Disco Mix Club), a subscription service to DJs only, where he did regular mega-mixes and remixes. At the age of 18, I started working in two clubs after winning an audition – The Park in Kensington and Tropicana Beach in Luton, after that Easy Street in Nottingham and Croydon.

At 19, I got my first mega-mix accepted by DMC and started to become one of the regular mixers. I learnt the art of remixing by watching DMC producers like Paul Dakeyne work his magic from a 24-track tape machine, which is where it all started for me. Around this time, I had a mega-mix released called The Brits 1990, it went to No. 2 in the national charts which I was so thrilled with. After, it felt like I had gone as far as I could with mega-mixing and I turned my attention to making my own records.

Can you explain your music-making process, is it often planned as a creative sequence of events or is it more instinctive and in the moment?

It can vary depending on how I might approach something. A small vocal or keyboard hook I hear in my head or on a record can inspire me. It could also be something I hear in a club, on the radio or something on a track I’m playing in the car. From there, I always go on to build a good groove up, bass and drums etc. It’s not unusual for me to start with one idea that then morphs into another.

I like to be hands-on, continually tweaking notes and sounds. Sometimes, I will leave something if I haven’t got it quite right and come back to it days, months or – in the case of The Weekend – about a year later.

You often work with other singers, musicians and producers and have sustained a partnership with Jon Pearn as Full Intention now for nearly 30 years. What do you think is the secret to collaboration in music, or has it not always been easy working with others?

Jon has been a great partner to work with, as we both understand what each other is trying to do. Jon is a great keyboardist. It has never been hard work.

In the industry, you’re well known for your remix techniques. It’s clear you’ve honed these skills over a period of years… How did you build your experience?

My time at DMC gave me the opportunity to work with multi-tracks such as Chic’s Good Times. I saw how each part was really well recorded, not that there were many individual tracks (in some cases 14 stems), but every part on there gelled so well with the other, resulting in the most awesome groove. It showed me that sometimes less is more and you are able to get a bigger sound. Nile Rodgers and Bernard Edwards had this locked down!

You’ve moved house recently and your studio is all boxed up. Do you plan to rebuild it with an updated and improved setup?

I plan to keep the same setup – Cubase 10 on my MacBook Pro plugged into my Apple Cinema Display. I love this way of working. I plan to still use my TLA Tubetracker mixers for vocals, guitars etc, as they give me the warmth of valve inputs. At the moment, I’m thinking of building a studio at the end of my garden with lots of natural light. I also like working just on my laptop, whether it’s on the train or a plane. But I always make the final tweaks with my favorite engineer and London studio, just a couple of hours each week on some rather nice large Genelec monitors.

You’ve written and remixed countless club anthems and classic works over the years – what are you most proud of?

For me, my standout works are my own track The Weekend and remix-wise, my recent rework of Sylvester’s You Make Me Feel (Mighty Real) and one that blew us up as Full Intention: Duke’s So In Love With You.

You’ve got a Moog Voyager signed by Bob Moog himself. Can you tell us the story behind that and do you still use it today?

I used to! In about 2006, I went up with a friend to the Turnkey music shop in London where Bob Moog was demonstrating it. I wasn’t planning to buy it as I went for my friend. After hearing and seeing it, I had to hand over my money! Bob signed ‘Moog Intention’ down the side. I really wish I’d never sold it, so if the guy who bought it from me quite a few years ago reads this and wants to sell it back to me, please get in touch!

Your career has been a long and fruitful one, what advice would you give to the young Michael Gray just starting out?

Find your own sound and try not to directly copy something that is in the national charts, as by the time you’ve finished, your track could be out of date. Make the style of music that you want to make, even if it’s not the most popular sound at the moment. Believe in yourself even when you get setbacks; remember, all it takes is just one A&R scout or manager to recognise something special in what you’re doing.

If you had a time machine and could visit any era of studio history, where would you go and why?

Definitely the late 70s to early 80s, to be sitting in the studios just watching how some of those amazing songs were put together with musicians having to play tight through the whole track and with no Auto-Tune to save out-of-tune vocalists. I would have loved to have watched the creation of albums such as Michael Jackson’s Off The Wall with Quincy Jones producing and Rod Temperton writing.

Producing music clearly gives you a great kick, can you pinpoint what exactly it is after all these years working in the industry that still puts a smile on your face?

I think it’s the great feeling you get when you work hard in the studio to make something you’re really proud of, then you play it out and get a good reaction. Or you hear another DJ play it, whether on the radio or in a club, it just gives you a massive high.