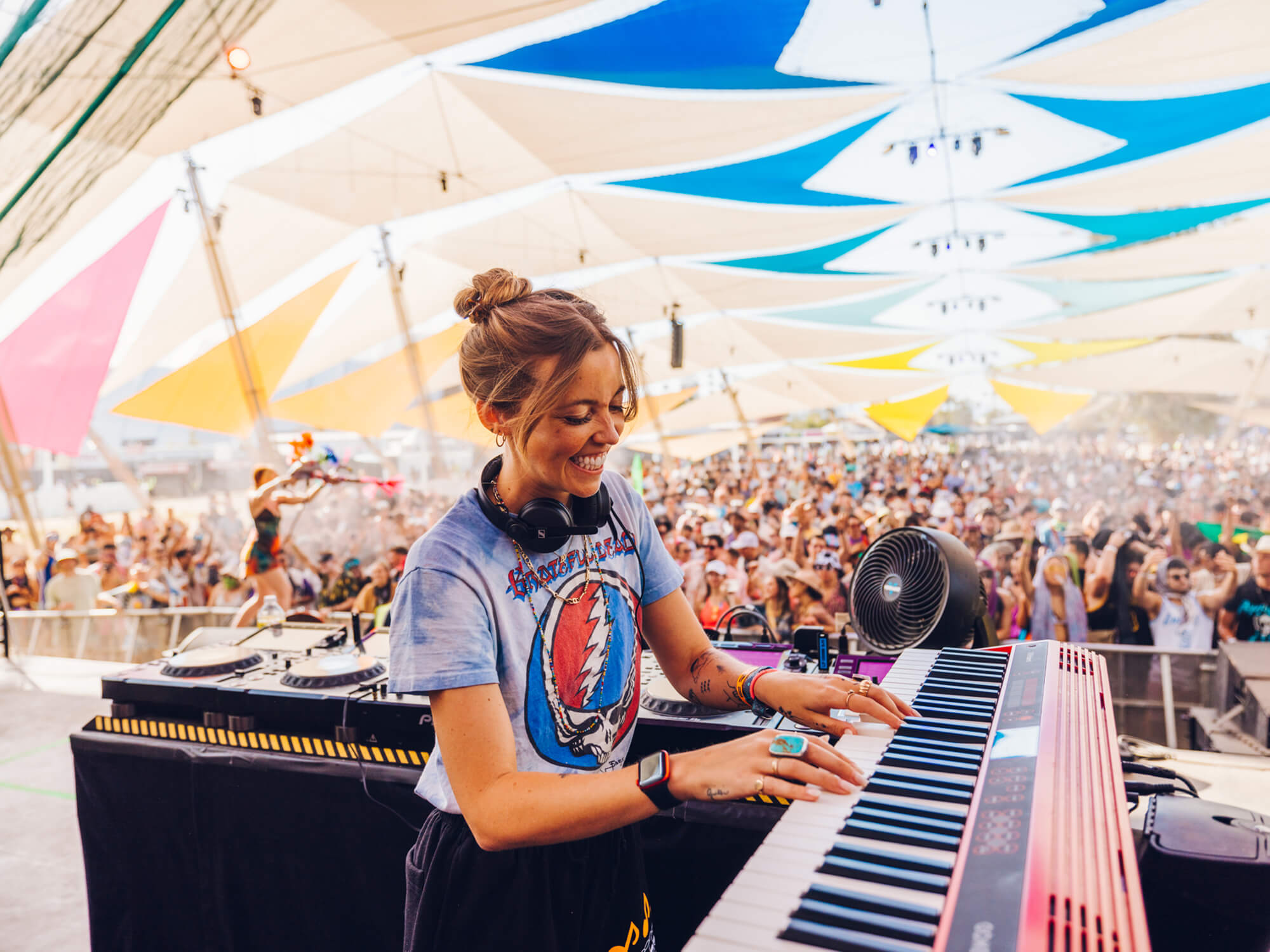 The Femme House co-founder explains her journey into music production, why more representation is needed in electronic music, and how she put together her new sample pack.

Giobbi is perhaps best known for her piano house discography, high-energy DJ sets and advocating for female and non binary artists as part of Femme House. But her success is the result of a desire to master and interweave all manner of musical disciplines.

“I was one of the lucky few that are raised by parents who said ‘you can do anything,’” Giobbi says.

Hailing from Eugene, Oregon, the Femme House co-founder’s workflow incorporates classical and jazz piano training, time spent in an all-female electronic band and her parents’ obsession with the Grateful Dead.

Such versatility underpins Giobbi’s appeal as a DJ and drives demand for her diverse bookings, which include festival stage takeovers, live sets and club performances. “I’m opening up for Sofi Tukker on their tour. We’re playing in venues because they’re doing a live show; I’m standing there behind decks in a venue, so I’m going to use some extra hardware gear to make it a more interesting show.”

While quick to acknowledge the benefits of her diverse musical skill-set, Giobbi also recognises the challenges of blending different vocations under one pseudonym. “Being a producer is 1,000 percent different to being a DJ”, she says. “People come to my shows to hear my tracks but sometimes I don’t want to play those. It’s been a really interesting journey to try to figure out how to satisfy the art form of DJing and build my career as a producer.”

Despite Giobbi’s supportive upbringing and willingness to try her hand at all aspects of music, the artist’s journey into electronic production was not obvious. “I didn’t have mentorship in that role,” she says. It was only when she read an article about Grimes’s production work that the thought emerged: “wait, I could do this!’’

“That’s when I learned the importance of visual representation”, she says. “I became dead-set on being that [representation] for somebody else in the way that [Grimes] inspired me.”

The need for greater female and non-binary representation in music forms the crux of Femme House’s mission, which was founded to tackle the fact that only two percent of charting producers were non-male when the project started.

The organisation aims to bring about change through a two-prong approach, Giobbi says. The first prong is education – “a safe space to learn and ask all the questions you want to ask.”

“The other [prong] involves booking a bunch of stage takeovers at festivals. We just wrapped our first Femme House tour, so that’s us trying to activate the visual representation component of seeing other female producers and DJs on stage. If you’re in the audience, you sort of start believing you can do anything.”

Charting producer demographics unfortunately still demonstrate what Giobbi calls the “cyclical” nature of the representation issue, whereby lack of representation fuels further lack of diversity. “It’s been between two and three percent for a decade or two, which is crazy.”

“The first Ableton Live course I took, it was me and 250 dudes. For me, that’s fuel to my fire, but I know that’s not the case for everybody.”

Giobbi is still optimistic about change. “We just launched She’s the Producer, a partnership with Alicia Keys’ nonprofit, She’s the Music. The first time we did it, there were 3,000 sign-ups within a day; we just got to that same number for the second round. There are so many female producers all over the world who are excited to learn.”

Femme House is not about encouraging every woman to become a producer or DJ, Giobbi says, but addressing the “power dynamic,” wherein non-male artists are reliant upon male producers to “come in and pluck them out of obscurity.”

“We want people to learn the language of the studio.” Fundamentally, Femme House aims to help women and non-binary artists “stay in control of the narrative of their songs. It’s your art and your voice” Giobbi emphasises, “that’s why I’ve been so passionate about it.”

Femme House’s sample pack series is one of the avenues by which Giobbi aims to help women and non-binary artists believe that they “can do anything”. The most recent installment is her free BandLab collection: Femme House: LP Giobbi.

A far cry from the secretive and reclusive producer archetype, Giobbi is keen to share as much of her process as possible in the aim of inspiring new producers. Giobbi describes creating many of the drum loops through sampling a live kit, resampling using Ableton Live’s Sampler and “adding distortion, vinyl dirt and phaser to make the hi-hats sound a little bit more psychedelic and naturally give it auto-pan movement.”

She also cites use of SoundToys and Arturia effects plug-ins, alongside taking piano chords right out of her 2020 and 2021 tracks Meet Again and Say A Little Prayer, hoping other producers can put Giobbi’s sounds to good use.

“I’m doing a lot more resampling of my own stuff, and I hope to put those out in more sample packs. I think that the more people that have them, the better.”

Many of the loops are characterful musical ideas, offering textural, melodic and rhythmic details through various layers and effects. This is a considered choice for Giobbi and her team, who believe that “the culture of open source” is important.

“If I make a really cool bassline, I want to put it out there and see what other people do with it. If they take it and make it into a sample then chop it, that to me is so cool.”

This collaborative spirit is apparent on Giobbi’s most recent release, Sinner, a euphoric house ballad produced with British artist, BKLAVA.

Heading up Spin Suga – a network of DJ/producers who aim to inspire young women and gender minorities in music – BKLAVA is a British artist/DJ who shares in both Femme House’s mission and Giobbi’s interdisciplinary approach.

While Sinner’s combination of emotive pads, lengthy risers and uplifting lyrics seem like a conscious reference to this shared mission, Giobbi says that she was initially unaware of this message.

“I ended up sending her a few tracks and then she sent me back what is now the top line of Sinner; it was remarkable,” Giobbi says. It was only after being asked in interviews where the inspiration for these lyrics had come from that Giobbi messaged BKLAVA to ask: ‘where did [the lyrics] come from? Why did you write this?’ BKLAVA explained: “I wanted to feel empowered as a woman. I wanted to feel like I could be how I wanted to be [as a woman].”

This sense of inclusivity and optimism, Giobbi believes, is the reason for the song’s success, racking up 2.9 million listens on Spotify in just over a month. “Once you make music, it’s not for you anymore. It’s for other people to interpret what they need to take from it and I think that’s so cool” she adds.

BKLAVA also joined Giobbi on Femme House’s spring US tour, an arrangement Giobbi says allowed for even greater musical representation across the platform. “[BKLAVA] plays a lot of breaks and 135 BPM and above. I know a lot of audiences in the US haven’t been exposed to that kind of music yet. You could see a lot of people thought: ‘Whoa, what is this?’”

While Giobbi’s career presents her with a variety of collaborative and individual opportunities, she suggests that such a jam-packed schedule is not sustainable long-term. “I’m going to reevaluate because my mental health is important. I’m going to need some more breaks.”

For the next few years, however, Giobbi is intent on remaining busy for the most part. “I’m just going to get everything I can get then maybe I will take a step back” she laughs.

After all, it is this willingness to take on new challenges that the artist believes has been her greatest asset.

“There is no one blueprint to do this job: there’s no one way to get there, which means that there are so many ways to get there.”

For all those looking to advance in the music industry, Giobbi advises: “just keep putting yourself out there. There’s going to be something you take away from that experience, I promise.”